Dusty, well-worn boots are just one way to distinguish ‘peregrinos’ from tourists in the Obradoiro Square of Santiago de Compostela. A rite of passage for those that have travelled for days, weeks or even months to reach the ‘finish line’ of the famous Camino de Santiago, these boots house aching, calloused feet, deserving of a rest. 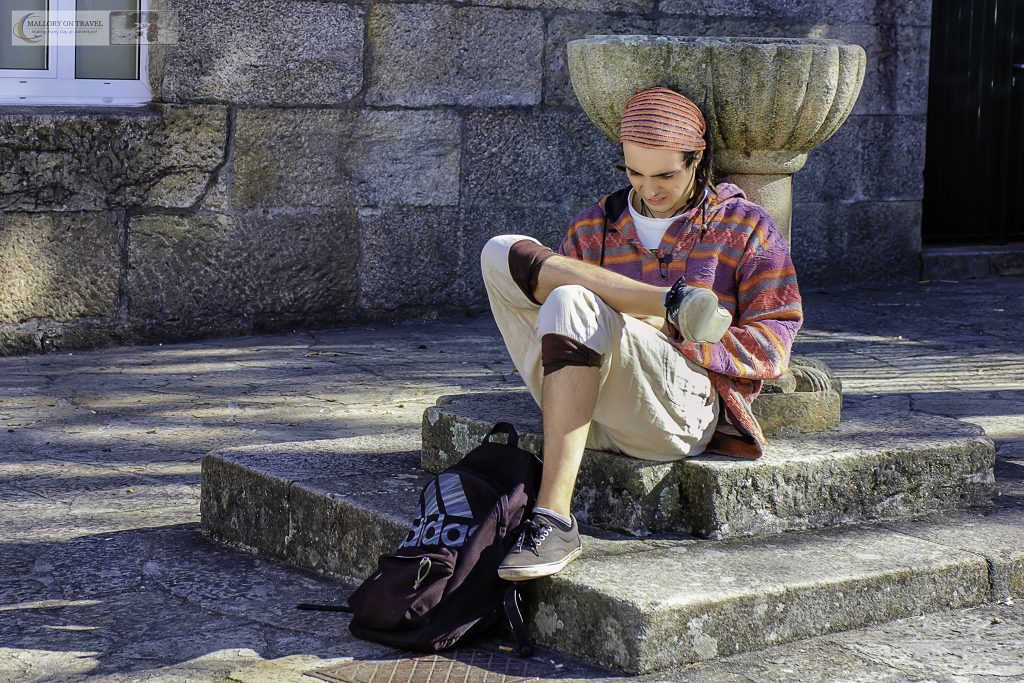 Peregrinos is a kind of term of endearment to describe modern pilgrims trekking or cycling the Camino de Santiago or Way of St James.

Descending upon the city of Santiago de Compostela from all points of the compass, depending which of the many routes of the Way of St James they have taken. Along dirt paths, dusty tracks and mile upon mile of paved roads of the French, English, Northern, Tunnel, Portuguese or Aragonese Way, just a few options they may have taken or even combined.

Among the peregrinos: Life on the Camino; A Pilgrim’s Way 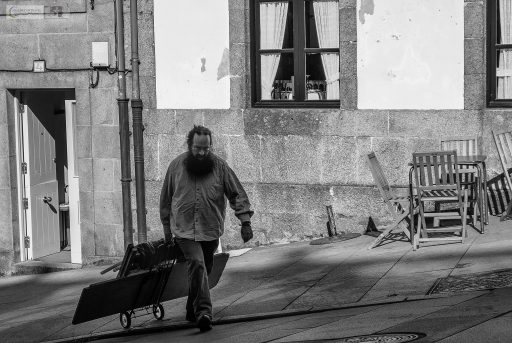 Arriving in pairs or small groups, they rarely seem to arrive alone, meeting up with friends made along the way, hugging and kissing like close family members which have been separated for some time. Catching up with adventures since they last met, discussing shared experiences in excited chatter and exchanging gentle banter about humorous mishaps they may have missed.

This is the comradeship of the Camino, and although it is a personal experience, there is a shared feeling of togetherness between peregrinos, which seems to overflow when they meet at the end of their quest.

The first few to arrive and produce a recent ‘compostela’ at the garage door entrance of Hostal de los Reyes Catalicos (the Parador) at the relevant mealtime will dine straight from the kitchen. Ten peregrinos dine daily at breakfast, lunch and dinner, fitting the tradition of hospitality to pilgrims throughout history along the various routes.

The Obradoiro Square is littered with resting peregrinos, lounging in pools of sunlight, using backpacks as pillows. Colourful islands of fleece and Goretex against the hard, grey stone of the square, bathing in the warmth of the late afternoon sun. Trekking poles or improvised walking sticks and water bottles lay close at hand, and occasionally, tired boots, in need of some polish, seem discarded and unwanted.

Along with the vibrant, cutting edge fabrics they wear, many carry traditional scallop shells, possibly tied to their poles or attached to a backpack designating them as pilgrims of the modern world.

Gracing the other four main squares and narrow streets of the Galician capital, peregrinos bring a splash of colour to the grand but often less than vibrant Gothic, Baroque, Romanesque, Plateresque and Neoclassical architecture of the city. 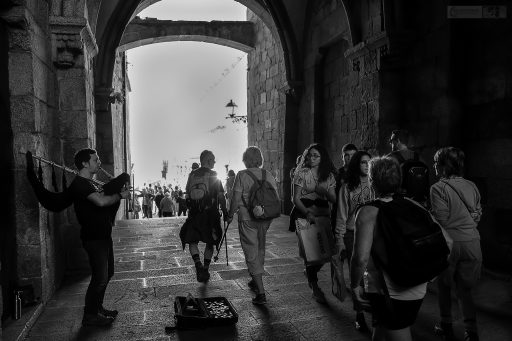 Playing the traditional instrument of Galicia

Fleece wearing peregrinos can be found drinking café cortados and snapchatting among the silversmiths of Platerias Square, the Azabache artisans of Plaza de la Azabacheria, or in the trendy bars of Quintana de Muerto.

Plenty of the pilgrims now cycle the Way of St James, the route is slightly different, but as tarmac has now replaced many of the ancient pathways it is easily navigable by bike. Cycling peregrinos add their own dose of colour to Santiago de Compostela, an outdoor pursuit which has its own vibrant fashion sense and brightly coloured apparel.

Garish, tight fitting lycra and Goretex wearing men and women relax outside local coffee shops, aluminium and carbon fibre bikes, spray painted in every hue of the rainbow resting against nearby walls or lampposts. 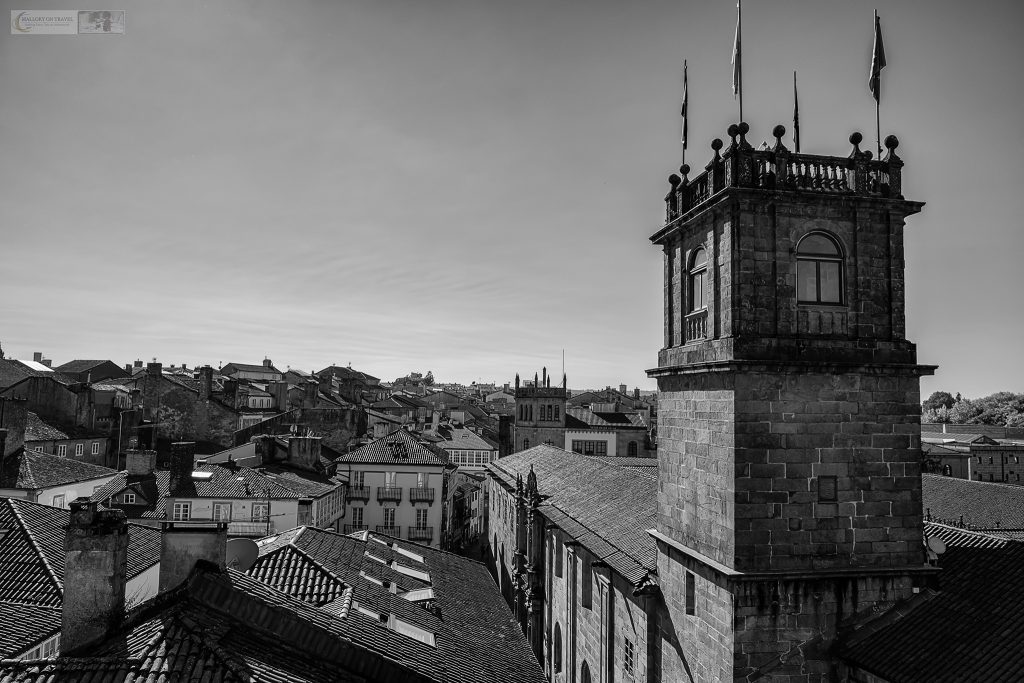 The rooftops of Santiago de Compostela 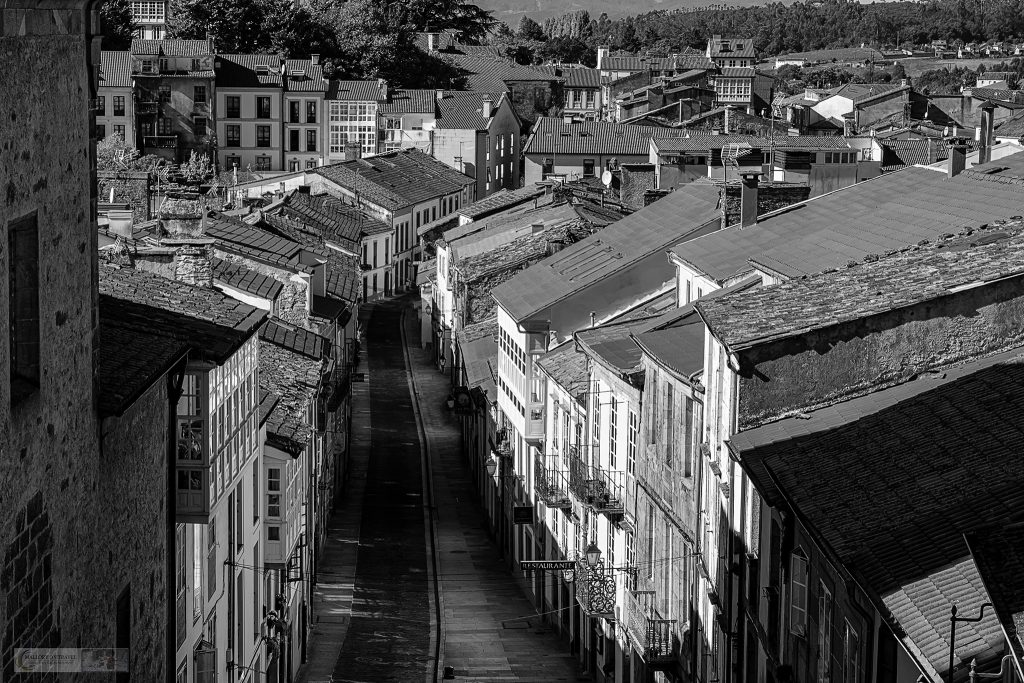 Santiago de Compostela is one of the holy cities of Christianity, where the tomb of St James the Greater, beloved apostle of Jesus Christ was discovered by hermit Pelagius in the 9th century. Yet it was a pilgrimage for pagans even before Christ was born; crossing northern Spain to Fisterra, which they considered the end of the world. Ritually burning their clothes as the sun fell into the sea at La Costa de Morta, the Coast of Death, symbolising death and rebirth.

The number of peregrinos arriving at Santiago de Compostela annually has risen considerably since 1986, when 2491 successfully claimed a compostela to over 301,000 in 2017, understandably jumping dramatically in each of the intervening holy years. 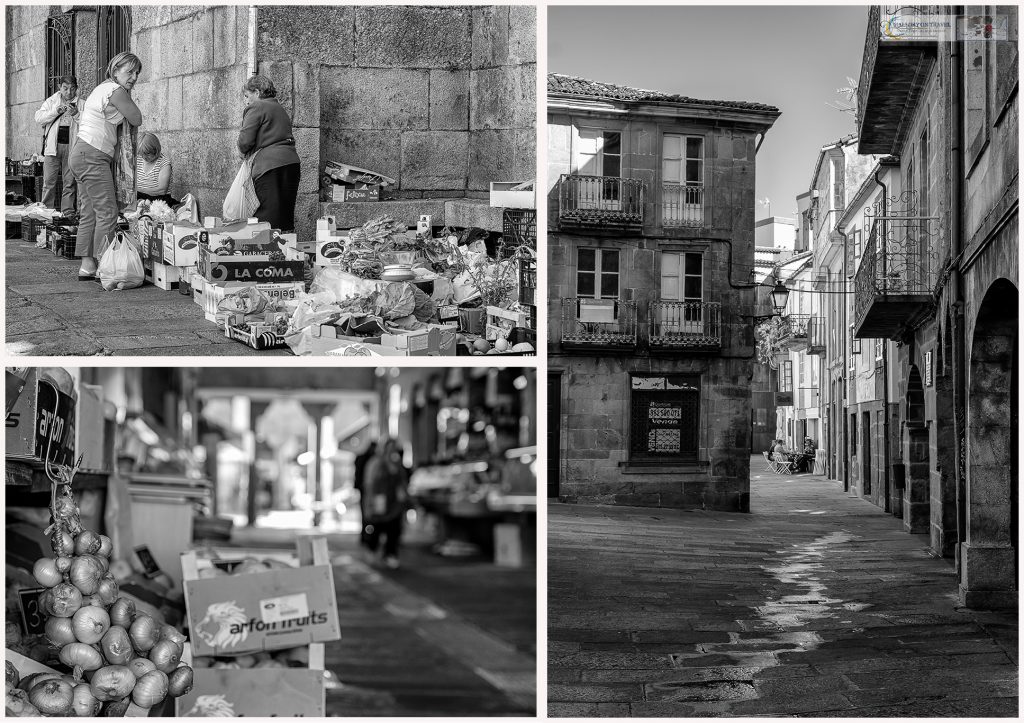 It may seem difficult to reconcile these modern, multi-coloured fleeces wearing and smartphone carrying peregrinos with the ancient traditions of religious pilgrims. However, religion is only one motive for deciding to complete the Camino, reasons for taking the pilgrimage are as numerous, personal and varied as the routes themselves.

Watching the steady stream of peregrinos arrive in Obradoiro Square, each with their own stories to tell and memories to treasure, keep and share is one of the city’s attractions. A vibrant community of travellers, which have completed their own Camino, for their own reasons and overcome their own challenges to arrive here for their own personal moment of triumph. 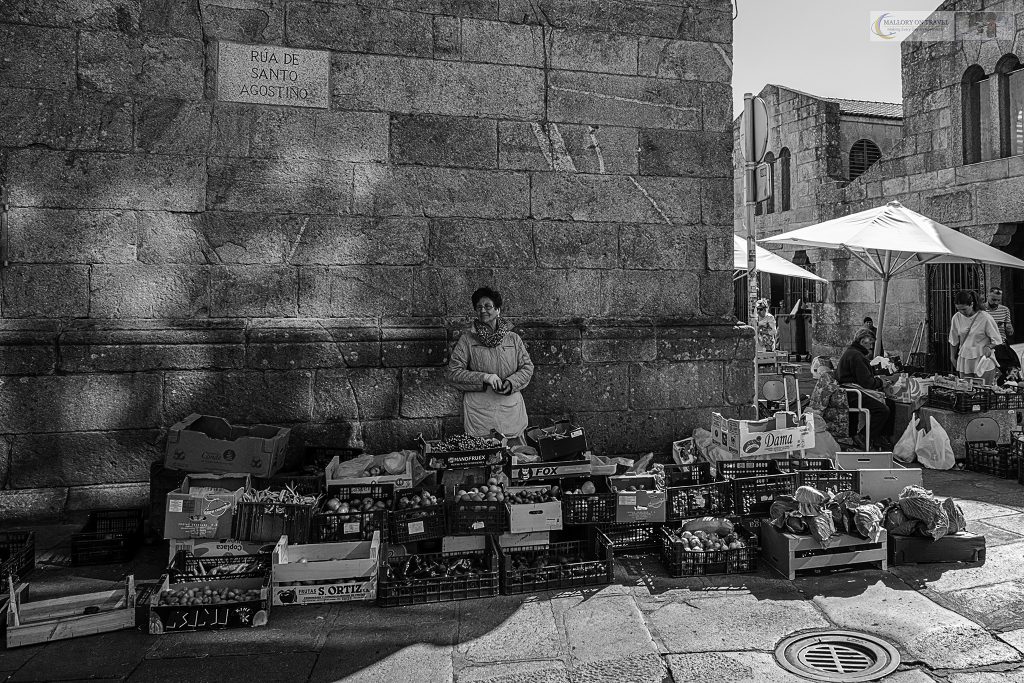 Guide to the Way of St James: Slideguide to the Camino de Santiago (Norte)

Whatever their reasons, this colourful, diverse group of comrades seems welcome in the city, they add to the vibrancy of this multicultural capital. Whether they hang up their dusty, worn boots or clean them off for another day, each peregrino brightens the streets and squares of Santiago de Compostela, deserving of their day in the sun. 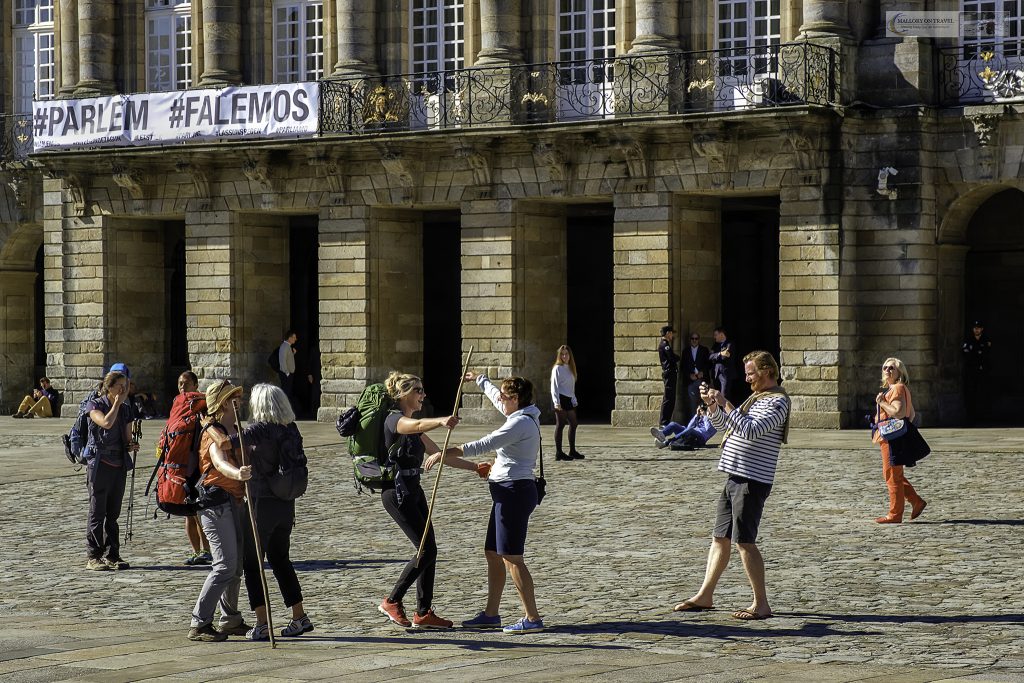 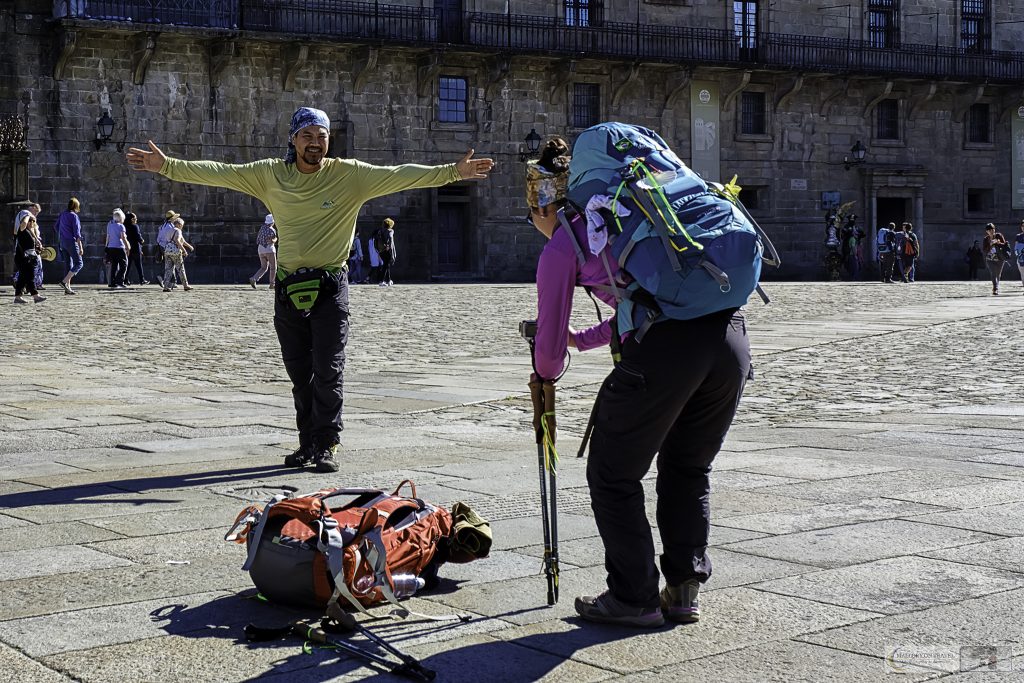