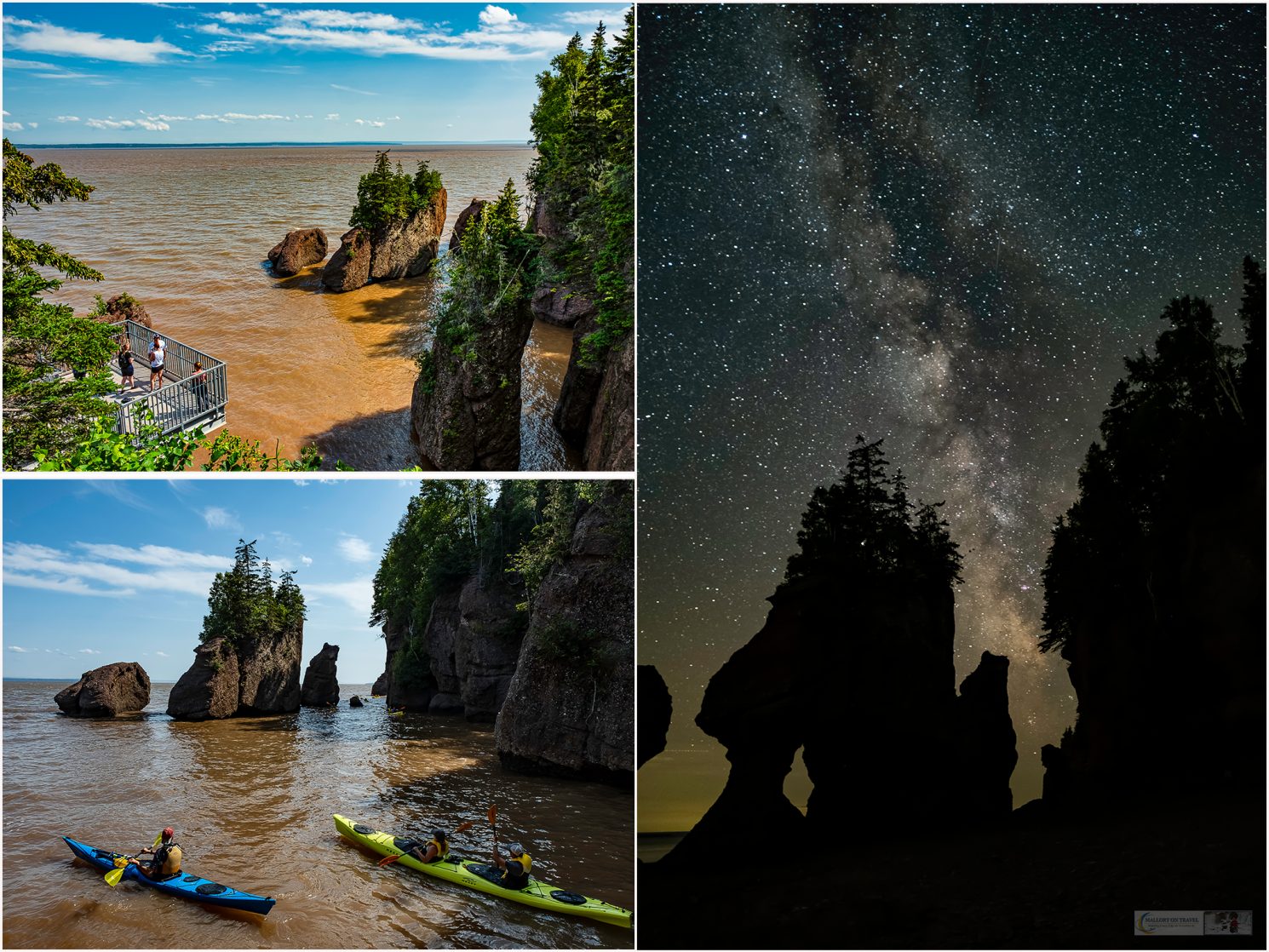 The night sky shone bright with more than a billion stars, so numerous it’s impossible to comprehend their number, twinkling diamonds in an inky black sky. My companions and I stood transfixed under the Milky Way open mouthed, trying to fully absorb the spectacle of the impressive galaxy which surrounds us. The sea stacks of Hopewell Rocks standing, silent and dark like sentinels as the waves of the Atlantic Ocean soothingly lapped at their bases, it was already an evening to savour.

Wandering in relative silence among these hulking rock leviathans under a ceiling of celestial splendour it was a night to inspire poetry, epic tales of adventure and endeavour or perhaps a song:

“City of stars, are you shining just for me?” – from the film LaLa Land

We were participating in a astrophotography workshop with Kevin Snair of Creative Imagery, and as soon as the sun sank from the sky it was evident we were in for a treat. Kevin is also an interpretive guide at the Rocks Provincial Park, so probably knows its moods and nuances better than anybody. He is well worth seeking out if you are visiting, even if night photography isn’t your favourite way to spend an evening.

However, with the chances of viewing the Milky Way on a clear night, anybody with a half decent DSLR camera and a tripod should consider this excursion.

Kevin knows all the tricks, and had us intrigued when he produced the Hopewell Rocks night photographer’s essential piece of equipment; basically, a modified bucket on a long stick. The wild guesses running through the minds of several highly imaginative photographers are probably best left well alone, but when he eventually used it to ‘douse’ a streetlamp which overlooked the beach we all laughed and nodded our agreement as to its usefulness.

It was also quite amusing, as although there wasn’t any reason for us to be quiet, everybody seemed to converse in hushed tones, whispering among ourselves as if in a place of worship. Which maybe as the columns of rocks surrounding us did appear to deserve some reverence, especially under their blanket of stars, the various constellations appearing to congregate overhead.

“When I start feeling that it’s gone too far, I lie on my back and stare up at the stars and wonder if they’re staring back at me” – Michael David Rosenberg, Passenger

Kevin was being ‘pestered’ by an Asian gentleman brandishing a smartphone with a magazine worthy Instagram image of the Milky Way, asking for advice on how to emulate the photo of his dreams. It was quite funny, but also probably quite annoying for Kevin, however the consummate professional he diplomatically pointed out that his ‘students’ were paying for his expertise and it would be unfair to pass on tips freely to anybody else. He also gave the gentleman his card of course!

All too soon the workshop was over, was that really two and a half hours, felt more like an hour. However, everybody regardless of skill level or experience had managed to produce at least one acceptable image of Hopewell Rocks sentinels under the stars.

The Bay of Fundy, where the rocks are situated has the highest tidal range in the world and can rise over 50 feet or 16 metres at times. Witnessing them at both high and low tide, when it is possible to walk on the beach among the rock spires is recommended. Therefore, checking the tide tables is necessary to fully appreciate the range of the tides and to appreciate the park fully.

Finding Whales in New Brunswick – A Whale of a Tale

It is also possible to kayak among the sea stacks at high tide, paddling in a group under the guidance of a qualified guide. Though as an experienced paddler I’d love an opportunity to kayak among them at night under a sky like the one we witnessed, it would be magical, but it only possible for the most experienced kayakers.

Of course, there are plenty of opportunities to kayak on this coastline, and for those that prefer to keep their feet firmly on dry land the nearby Fundy Trail is great to drive, cycle or walk providing some great views and plenty of fresh air. It is well marked with numerous viewpoints along the way, all of which are shown on the map provided at the entrance.

Photographers visiting the region however, give your camera a treat and book an astrophotography workshop with Kevin. You’re bound to discover a few new tips and walk away with an image worthy of gracing that space above the fire you’ve been saving for an extra special picture.

Hopewell Rocks – The Rocks Provincial Park to experience the highest tides on the planet and to walk the ocean floor. Email Claude Bourgeois [email protected]

Fundy Trail Parkway – hike, bike, relax, drive or walk along Fundy Bay, a UNESCO Biosphere Reserve, with tides higher than five storey buildings and a discharge of water equating to all the rivers of the world in a single day!