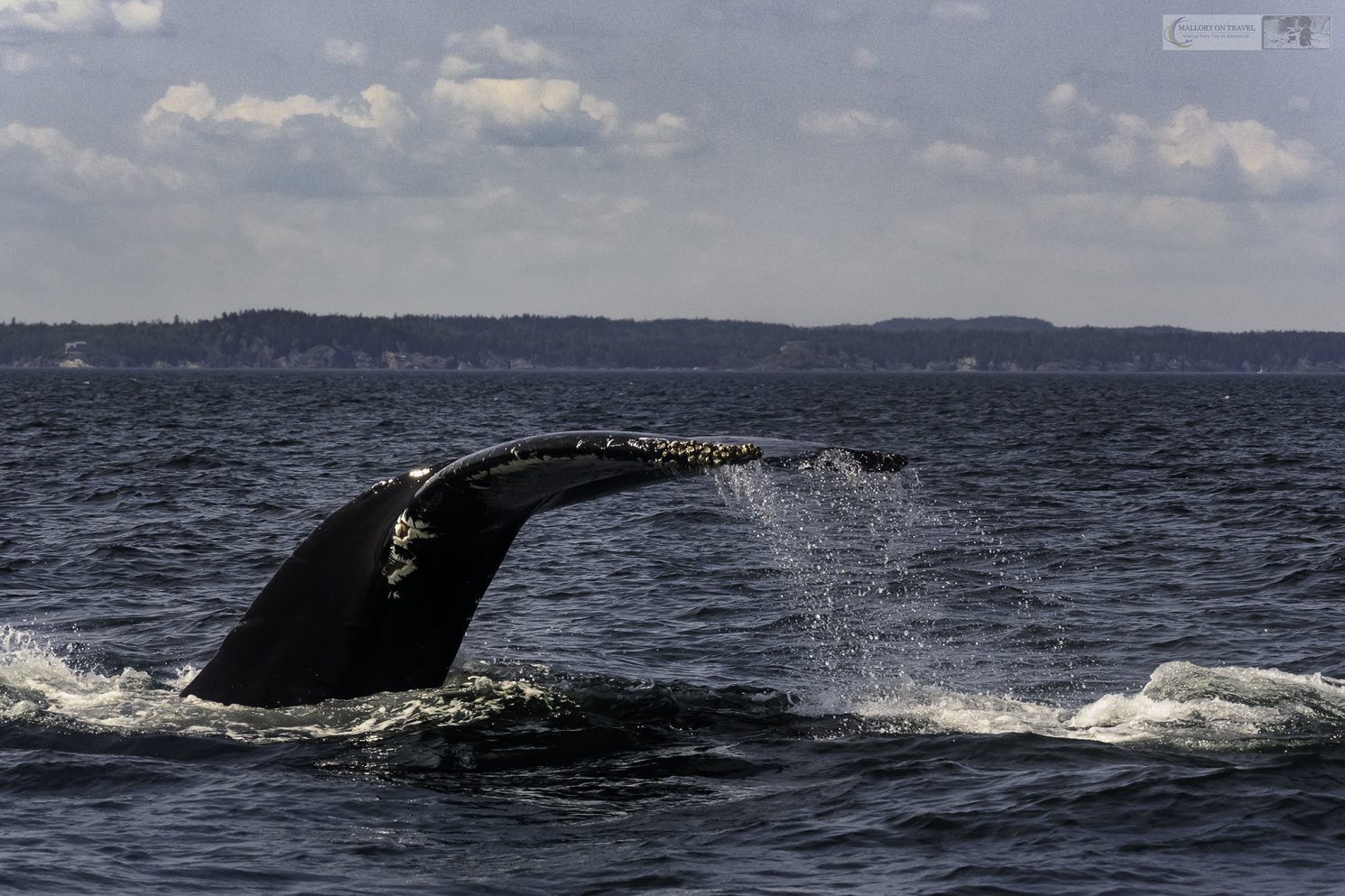 “Wow!” was the collective expression of wonderment as the giant leviathan crashed back into the ocean like a mammalian meteorite from inner space, displacing thousands of litres of water, less than 100 metres from our viewpoint. We were stood aboard a small whale watching vessel skippered by Mac, owner and captain of Island Cruises Whale Watch off Campobello Island, in New Brunswick, Canada.

It was the final act of an amazing two hours being entertained by several humpback whales, the ultimate performers among cetaceans. They had treated us to plenty of sightings, many glimpses of their magnificent tail flukes and two ‘breechings’, including this close quarter one just off our starboard bow. Yeah, I know, basically have seawater running through my veins.

A Whale of a Time

The breeching was over in an instant, and everybody aboard, including Mac and his first mate were so mesmerised, I doubt anybody got a shot of the spectacular event.

Our crew worked together, in perfect harmony, one spotting the tell tale ‘blows’ of a surfacing whale exhaling a jet of water 20 feet into the air, and Mac then chugging over to get us close enough to view these splendid sea giants. It’s basically a nautical game of cat and mouse, the whale steams along on the surface until the tail fluke signals a dive, the crew then have to try to estimate where it may surface again.

We steamed around the open water off Campobello for two hours, which passed all too quickly, as soon we were passing Head Harbour Lighthouse and back to the mooring in the harbour.

It had been a special day, aided by some beautiful blue skies, as everything is better in the sunshine. I’ve experienced many whale watching trips, this was in fact my second in a matter of days off Campobello, and my third in the region, but this was without the best, and will remain long in my memory.

There was a mixed group on board, a young family, an American couple and two young women, for some it was their very first whale watching experience. It’s easy to feel slightly envious of them, being so fortunate on their first opportunity, but instead I felt really happy for them, and it’s worth bearing in mind, subsequent trips may prove disappointing; the bar has been set very high!

“A whale sighting is always special, a rare experience to savour”

This experience was markedly different from the previous trip out of St Andrews, just two days before. Leaving the quaint fishing town, heading into the banks of mist drifting over the water in a speedy inflatable dressed in flotation suits, looking like a boat full of telletubbies.

While we did get a brief glimpse of a minke whale, one of the smallest of the great whales and common almost everywhere, even from the shore, this was our only sighting. This is nature, it is unpredictable, it does not perform on demand and does not appear just because we paid our money. It is rare however, that there isn’t anything worth seeing, plenty of seabirds, dolphins and porpoises and possibly the occasional sealion, it is still an enjoyable experience.

Just blasting over the waves, bouncing along at high speed is great fun, and an experience not to be missed.

The ribs of St Andrews are the fastest, they are able to get to the whales quickest and are usually spotting in the same areas as Mac, in fact they all work together to ensure everybody sees whales whenever possible, and everybody goes home happy. On both days, successful and not so successful, all the boats were looking in the same areas, and the passengers received the same experience.

“Whale watching, any nature watching is usually an unpredictable affair”

Fin whales are also common in this part of the world, the second largest and fastest of the great whales, yet not quite matching humpbacks for sheer excitement. The rare Northern Right Whale is also a possibility, but they are now so rare, even the fishermen and whale watching skippers have only seen a few.

The morning which followed my ‘special’ experience was capped by a comment by a local lady helping serve my breakfast. I was busy gushing about the trip and sharing a few images, which she spotted, immediately informing the group that seeing the shots she had changed her mind about joining her family for a whale watching trip that day, she was definitely going ……… the ultimate New Brunswick postscript exhortation!

NB: For the reasons of unpredictability of whale watching, and avoiding a negative conclusion, a link to the specific operator in St Andrews is not included. Just look for the telletubbies shuffling around and speedy inflatables.

Although I was a guest of New Brunswick tourism, all gushings in this post are a result of my genuine excitement!