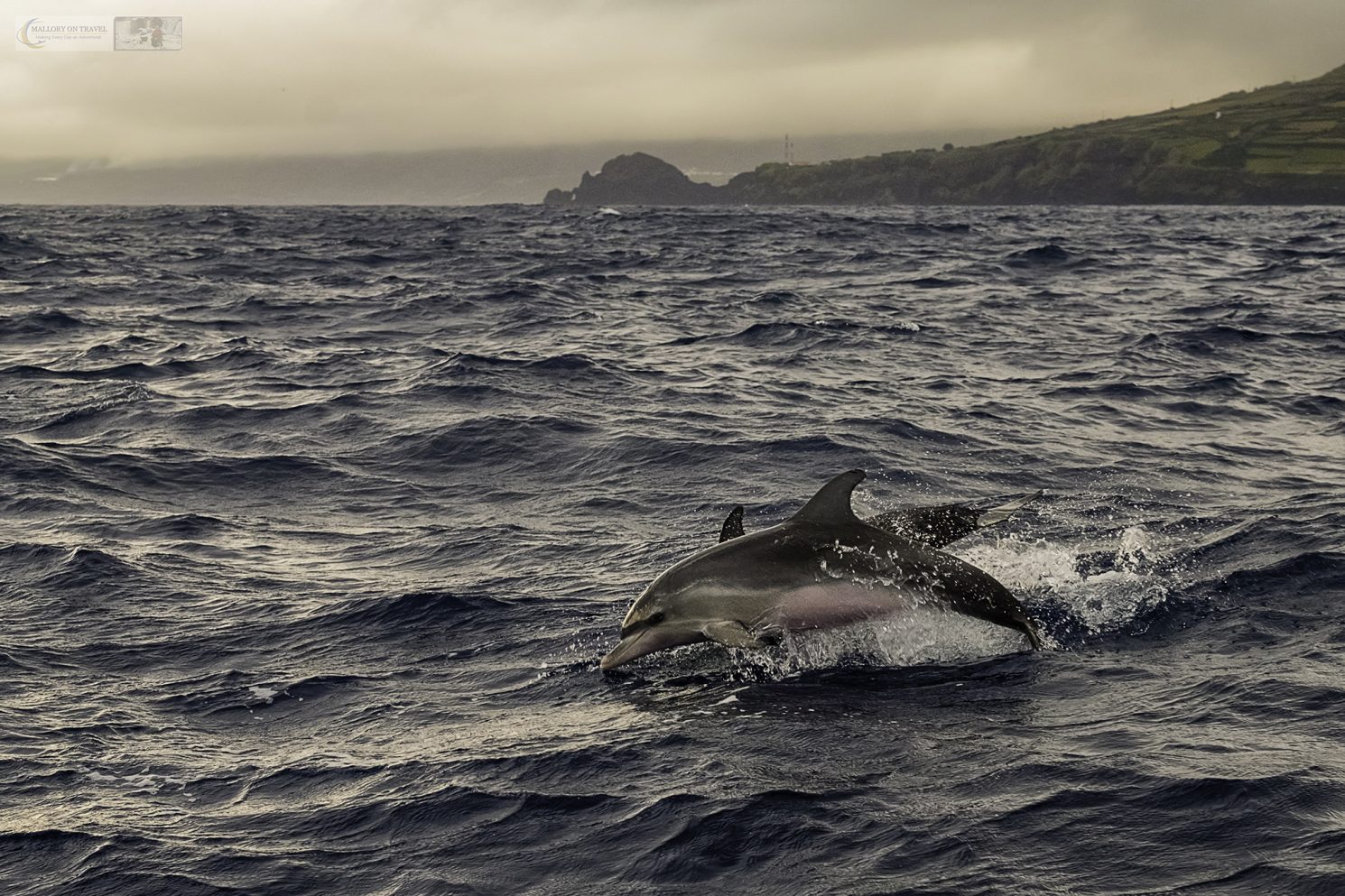 It had probably been less than an hour since the first dolphin had surfaced close to the speeding rib. Initially, the excitement had been intense, all aboard the inflatable craft gripped, even elated by this encounter. The marine mammal, so close we could almost reach out and touch it, holding our collective breath as it sped alongside the craft, easily matching it for speed. 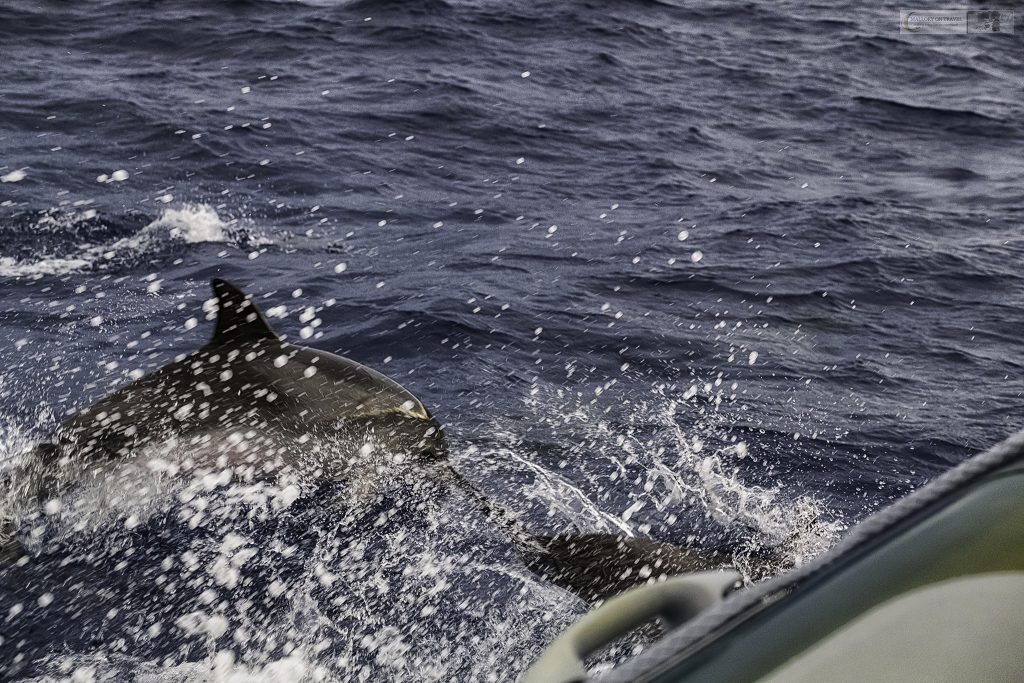 Close up and personal

However, this was such a common occurrence now, that we barely gave successive dolphins a second glance.

I was in the Azores, a popular whale watching destination and a major motivation for this visit to the Portuguese islands. I was of course hopeful of seeing one of the great whales. It was late season however, and although the chances of an encounter with the largest animal on the planet, a blue whale was unlikely, there was a slight hope that the mighty sperm whale could still make an appearance. 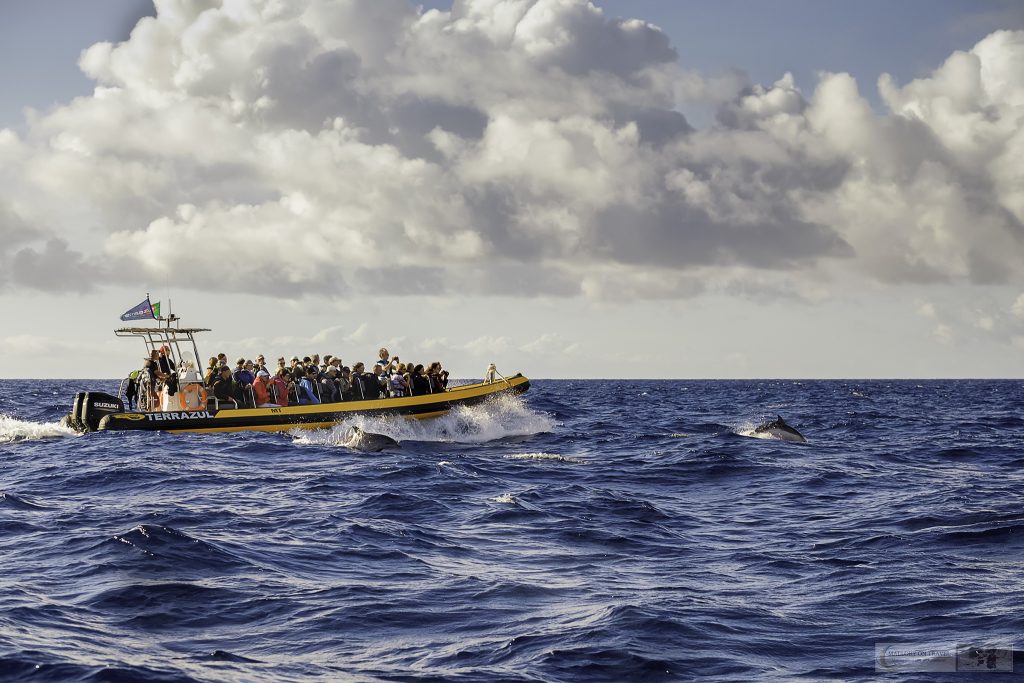 All aboard the rib

Views of the islands: Postcards from the Azores

The largest toothed whale on earth and the subject of the classic book “Moby Dick”, seeing one would be a lifetime ambition achieved. A video of these mighty creatures filmed underwater by one of the crew had been showing back at the harbour prior to leaving. It was stunningly beautiful, and although any encounter is unlikely to have been this impressive, the video certainly left me eager for more.

“It wasn’t to be our lucky day, although we did manage to see a couple of smaller minke whales, we had to be ‘satisfied’ with a superpod of dolphins. Trust me, that’s still damned exhilarating” 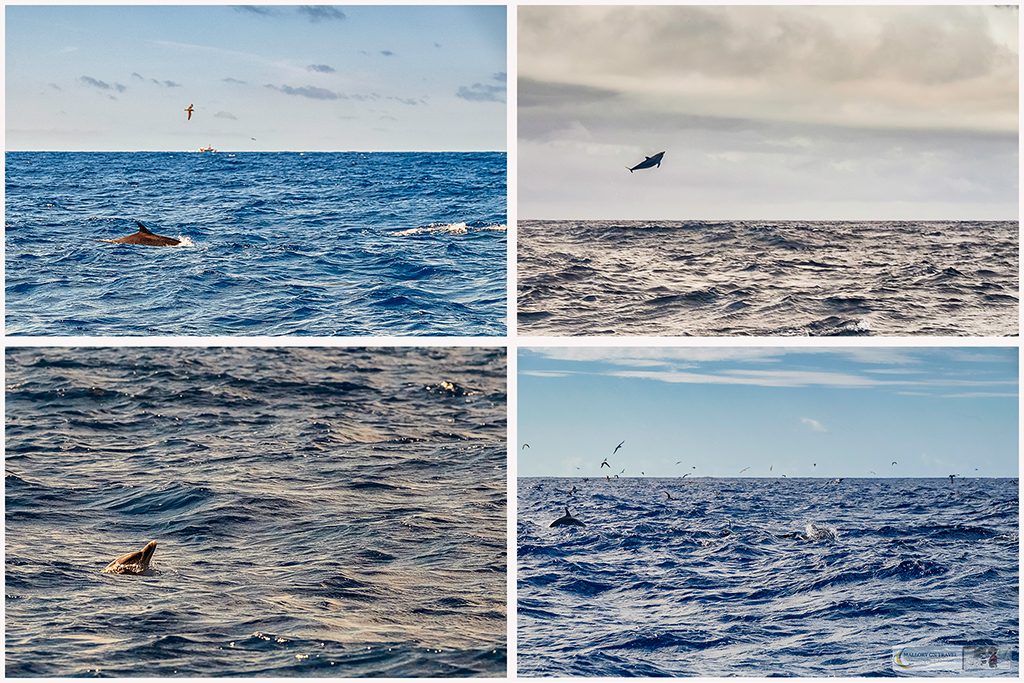 This was my second whale watching trip in the Azores, the first had been out of the picturesque harbour of Lajes do Pico, with Acua Açores on the island of Pico. Several days later I was back out, this time on the island of São Miguel, with Terra Azul out of Franco do Campo.

On both occasions we encountered a huge pod of dolphins, probably hundreds, if not thousands of cetaceans. The ocean a thrashing cauldron of mammalian torpedos, with flocks of seabirds circling above. 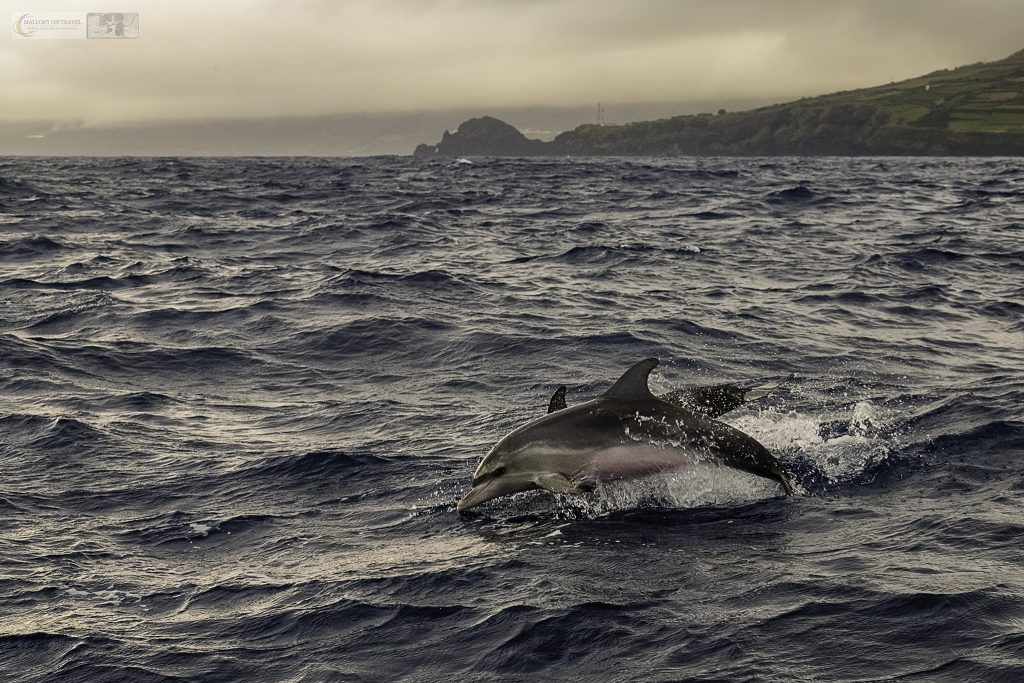 The first clue is usually these seabird squadrons, like duelling jetfighters circling above the waves, the cacophony of sound growing louder as we cruise closer. The sea appears to erupt everywhere, darting, sleek cetacean missiles breeching around the inflatable rib, surfing the waves, sometimes jumping clear of the water.

It may sound as if photography should be a cinch, with hundreds of dolphins causing the water to boil. Easy to get some good shots, however, they maybe everywhere, but it’s surprisingly challenging.

It is difficult to know where to point the lens, something seems to be happening everywhere, and they are extremely fast moving. Photography is often reactive, capturing disappearing tail fins as they slide away into the ocean. Discipline is required to keep the lens on a specific spot, patiently waiting for a dolphin to appear, rather than haphazardly reacting to every splash or sight of a random fin. 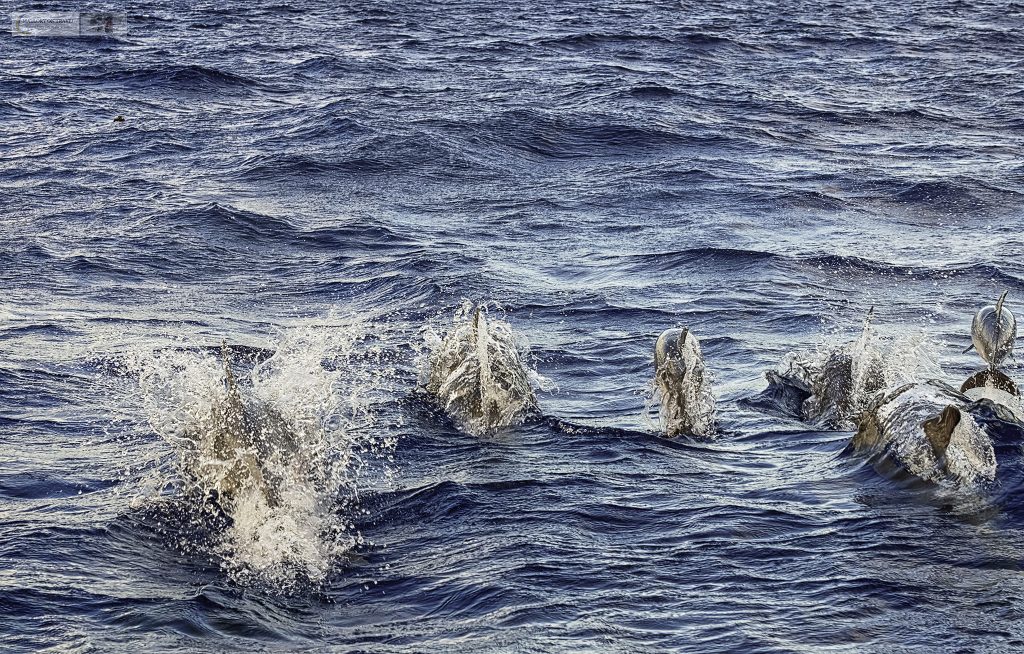 Fellow passengers try to help, pointing out where a particularly dramatic breech occurred, but usually it is too late; remain focused. I could mention the constant pitching and rolling of flimsy craft in a powerful swell, but you might start feeling sorry for me.

“At times they were so close, long lenses became useless!” 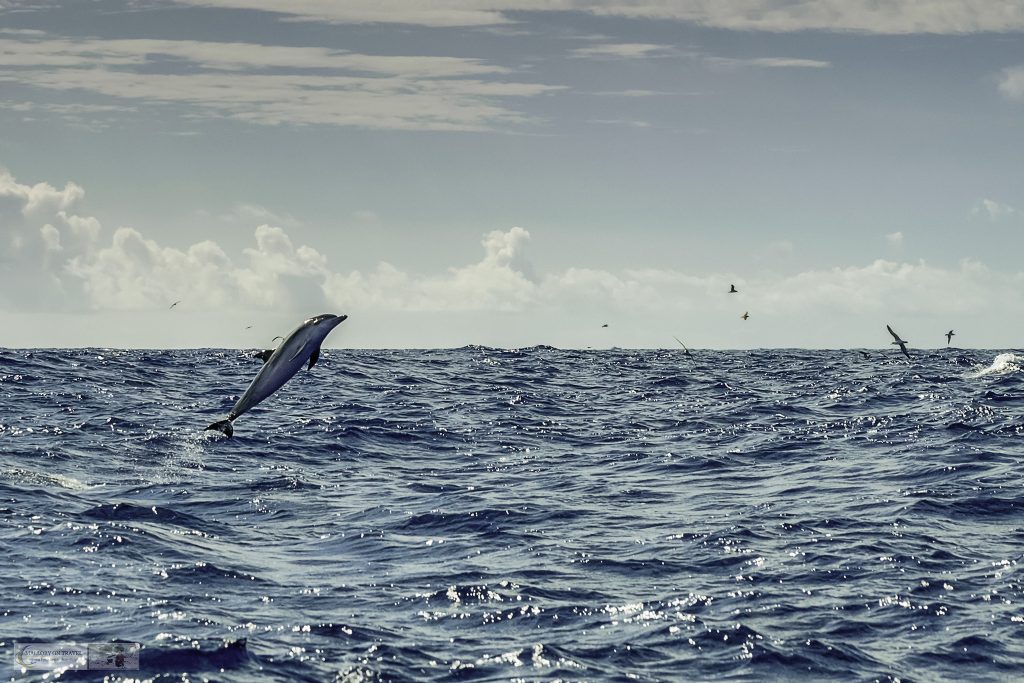 The captain informs us that it’s possibly the largest superpod he has seen, and later even starts discussing the need for culling. A difficult topic for the average tourist to accept, but this is a fishing community, where families rely on the sea for the livelihood. A bloated population of dolphins almost certainly seems a threat to their way of life, it’s a difference of perception. 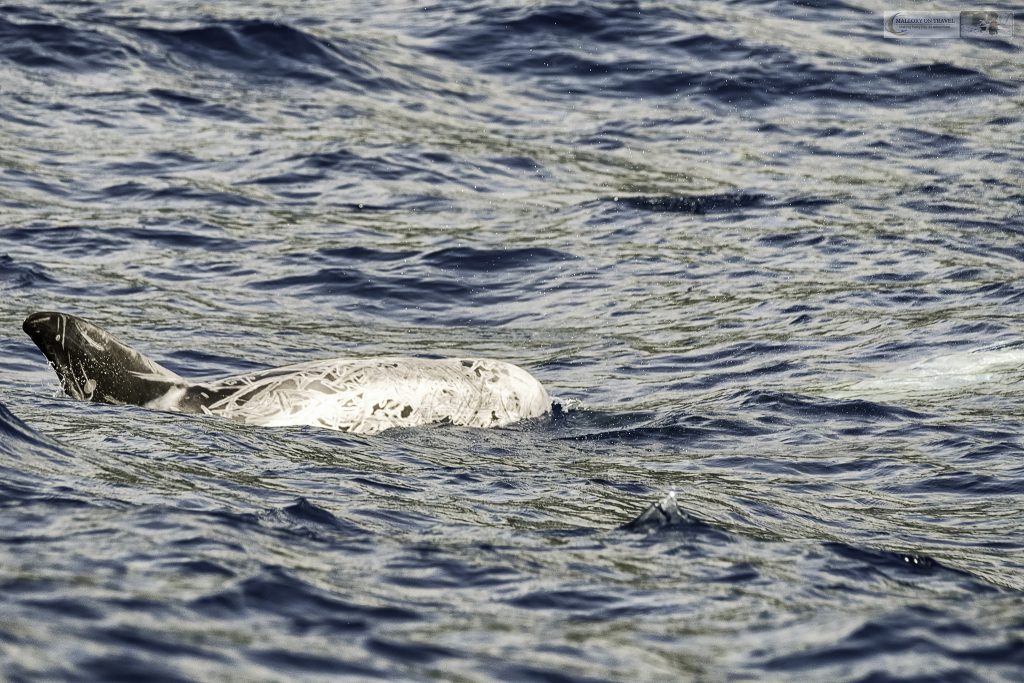 Whaling was a major source of income in the Azores for more than a century, using traditional sailing craft and spotters in towers on the shore. The last whale was captured in 1987 in Lajes, and whale watching became a major industry. The lookouts system is still used, but now they guide watchers rather than whalers to the leviathans.

There is a museum in Lajes, which has some exhibits and videos detailing the history of whaling in the Azores. The walls are adorned with photographs of local whalemen, many of whom are still living, they fascinated me.

It would be a lie if I claimed not to be disappointed to not witness the ‘blow’ of a sperm whale, yet this encounter with so many dolphins, not once, but twice was equally exciting. The fast-moving marine mammals are some of nature’s most charismatic creatures, continually smiling, they’re capable of bringing smiles to whale watchers on even the grimmest day. 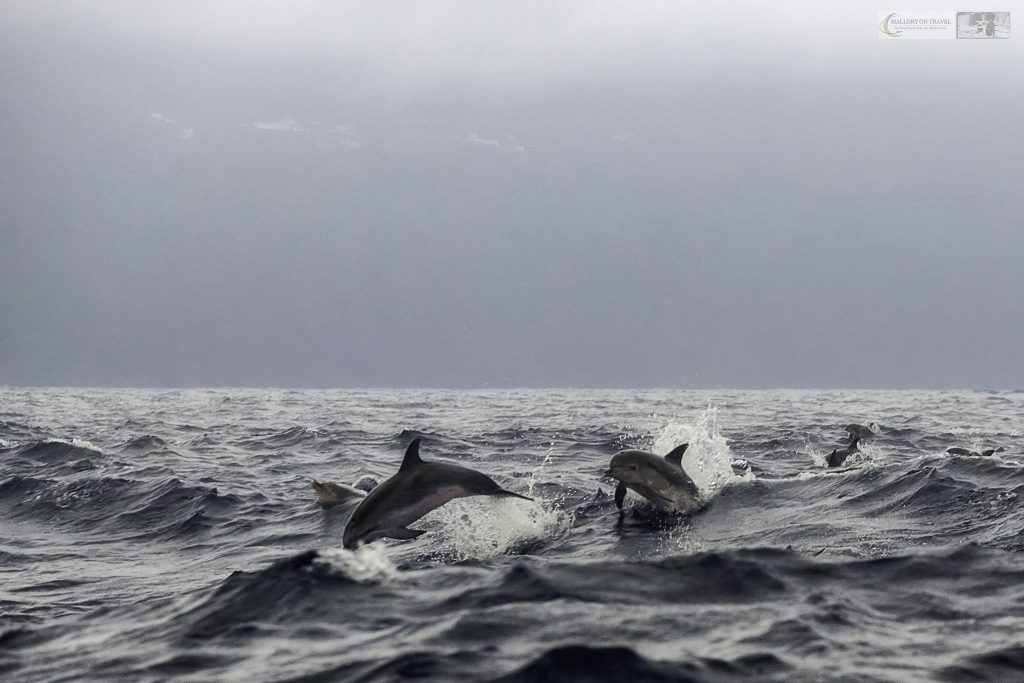 Each time a rib returns to harbour, its passengers are still excited, chatter continues about the encounter, not a hint of regret among them. Late September may not be the height of whale watching season, the blue whales may have migrated to their winter haunts long ago, humpbacks and sperm whales may not be around, but the dolphins most definitely are! 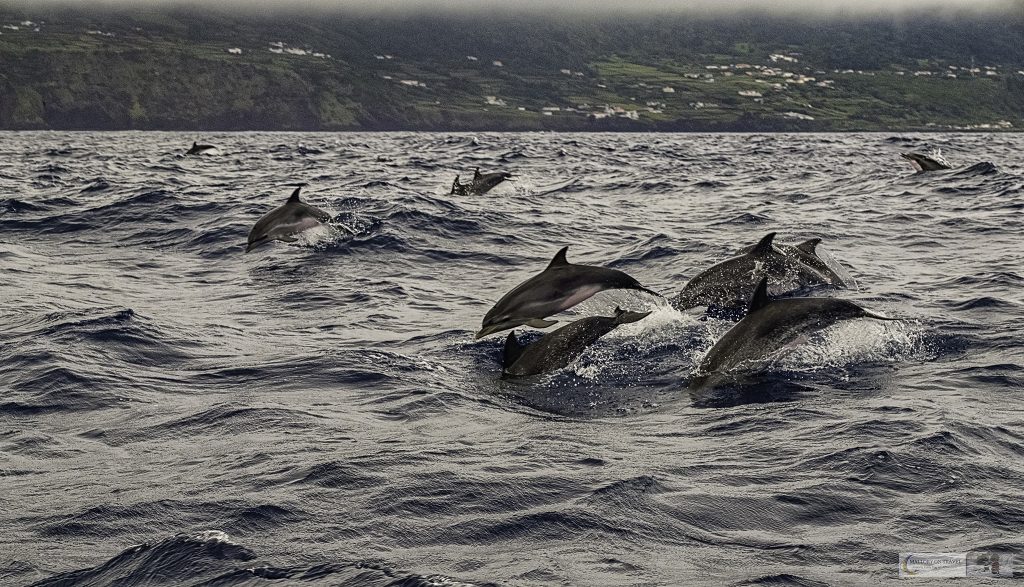 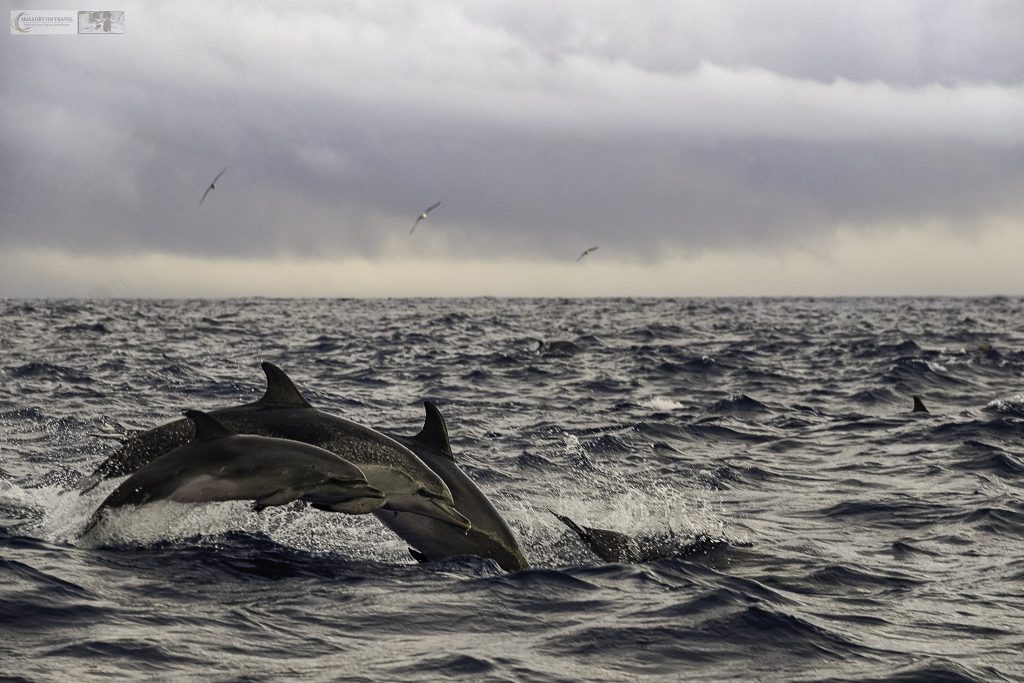 Had enough dolphins yet?


Getting there – Azores Airlines operates globally with flights from most of Europe, North America and northern Africa.

Getting around – Several car rental companies operate in the Azores, but Ilha Verde appears the most accessible, operating throughout the archipelago.

While flights are required between island groups within the archipelago, Alantico operate short ferry crossings between several islands.

Best time to visit – Sperm whales and some dolphin species are present year round, but the best time is Spring. April and May are especially recommended for blue, fin and sei whales.