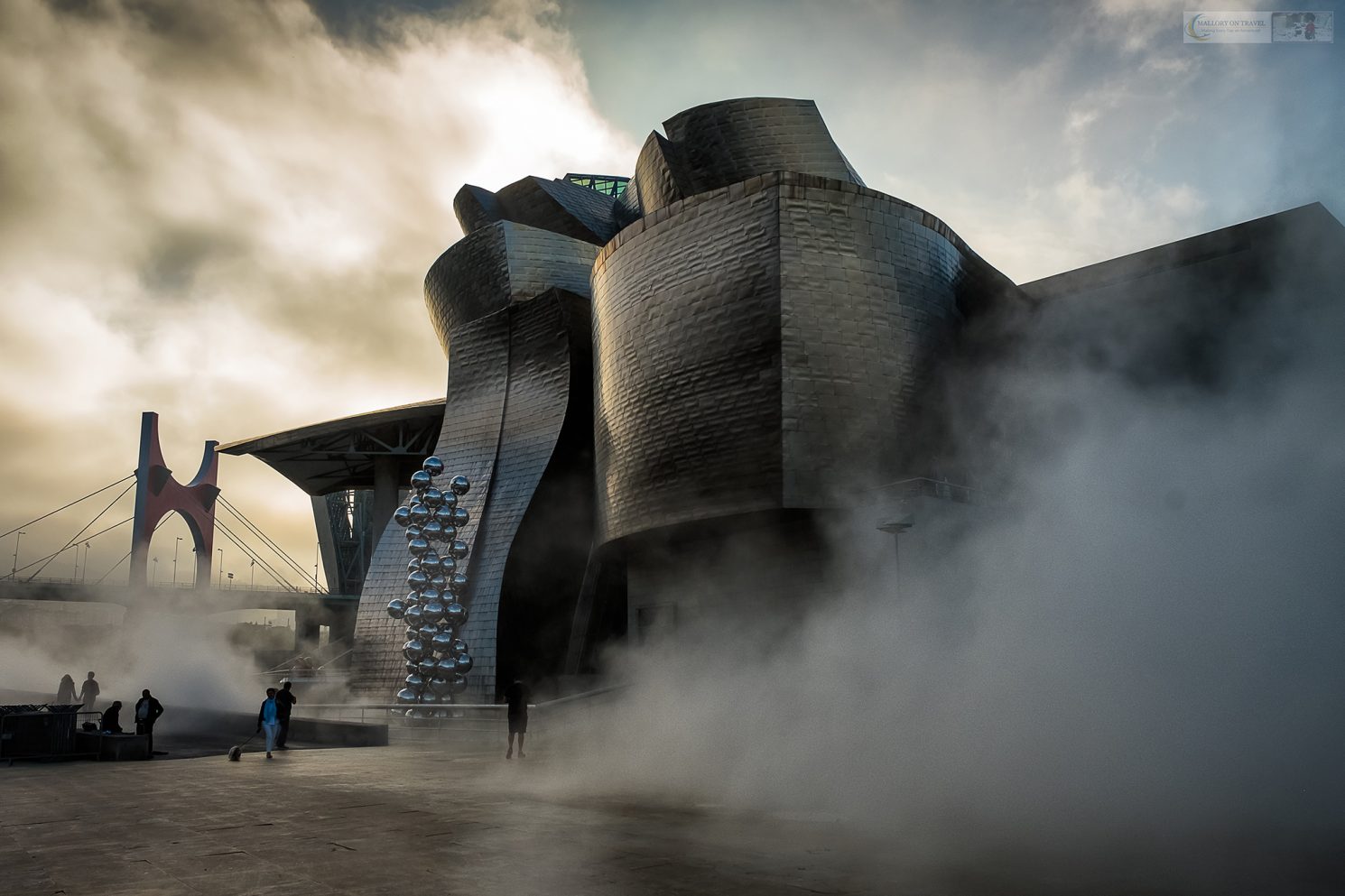 First impressions of the Guggenheim probably depend on from which direction you arrive . Whether passing by the huge floral puppy or wandering through the legs of the gigantic spider into a thick, artificially induced fog.

This is the beauty of the eccentric jumble of architectural shapes and eclectic exhibitions which comprise the cultural heart of Bilbao, the unofficial capital city of the autonomous region of the Basque Country, Spain. 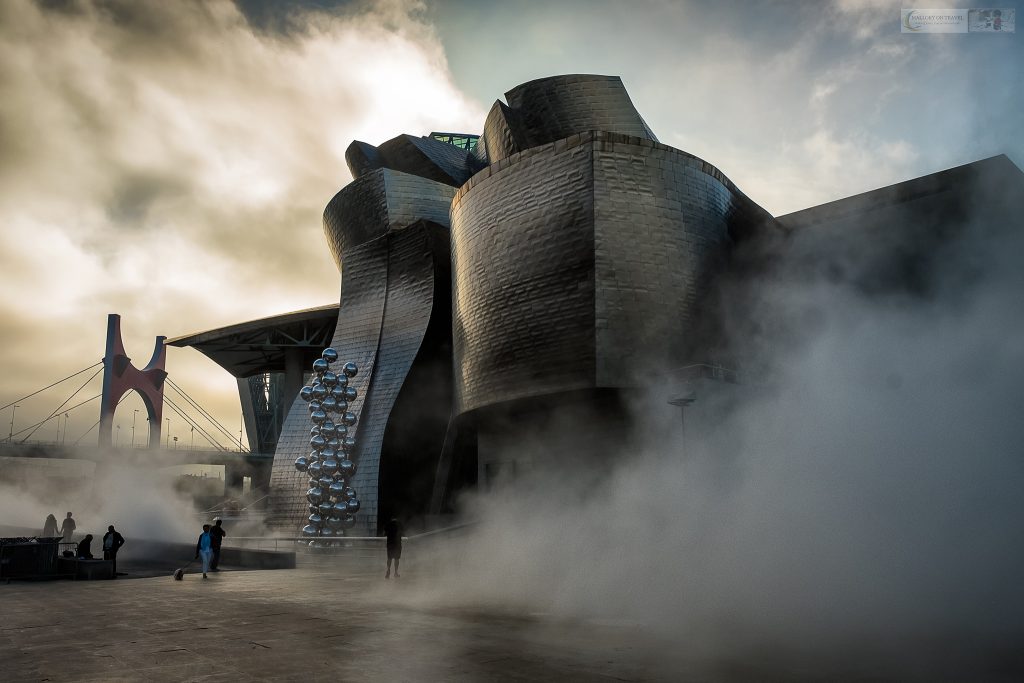 The Guggenheim in the “Fog”

Part of the Solomon R. Guggenheim Foundation, which also has museums in New York, Abu Dhabi and Venice, the Guggenheim was designed by renowned architect Frank Gehry. Built on the old, dilapidated area of the city port, on the banks of the Nervion River, it has transformed the run-down region into a vibrant hub of the city.

More from the region: Life on the Camino; Distractions in the Basque Country

Open since October 1997, it has been widely acclaimed as a success of contemporary architecture by all relevant aspects of society

“a signal moment in architectural culture” 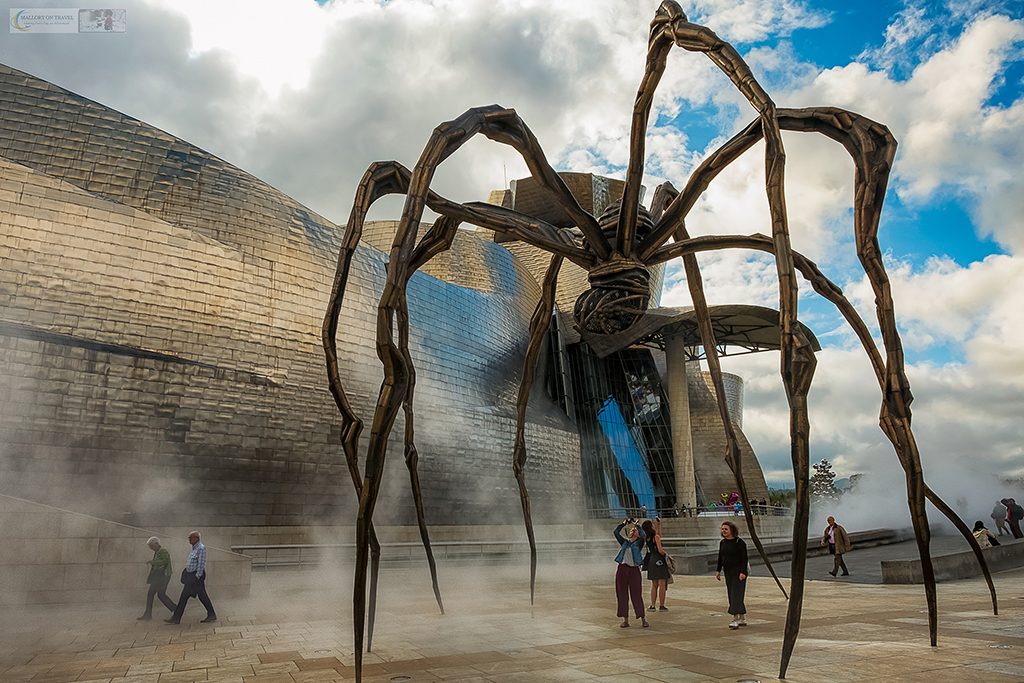 Gehry was encouraged to be daring and innovative, and anybody visiting the museum agree it is a building constructed with flair and imagination. Using glass and titanium, built around a large light gathering atrium he nicknamed “The Flower”, in a series of random curves, the materials are designed to reflect light, reminiscent of the translucence of fish scales.

Walking around the outside, whether viewing from the riverside promenade, the nearby bridge or the front boulevard, it’s almost impossible not to try to identify it. The randomness of the curves and structures, arranged in a series of levels; are they supposed to be the sails of a ship, maybe cloud formations or possibly the slopes of the hills of the region?

Looking at it once more, although there could possibly be a nautical theme, which would fit with the location on the old port, it seems more likely Gehry didn’t have anything in mind. Maybe, he really was just being random, daring and innovative. 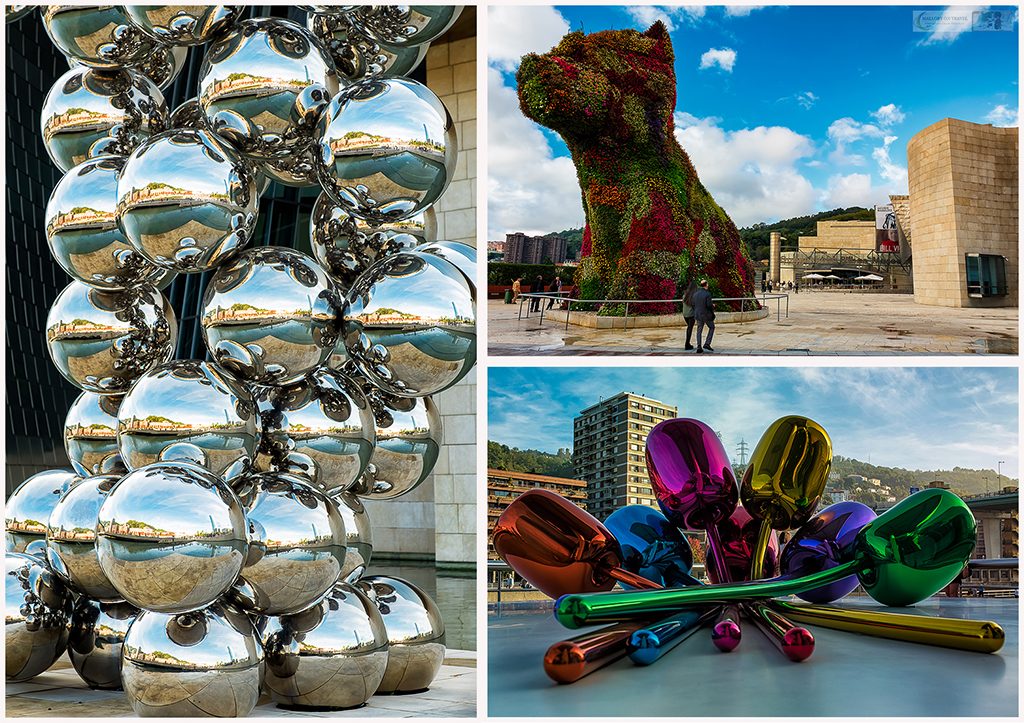 From left: Tall Tree & the Eye; the Puppy; Tulips

As already mentioned there are several exhibitions outside, possibly the most intriguing is the ethereal “Fog” sculpture, by artist Fujiko Nakaya. Generated by 1,000 nozzles, it drifts slowly and silently around the base of the museum, interacting with light and the other displays, ephemerally changing the appearance and visibility of each.


“It was amusing to hear one of my colleagues when we arrived the following morning declare that the fog was spoiling their photographs, their embarrassment on finding out the truth was more amusing!”

The exhibitions inside are as eclectic as the ones surrounding the museum on the outside, a series of permanent and temporary exhibitions. Arranged around the central “Flower” atrium, they include a variety of mediums, including video, photography and contemporary art. 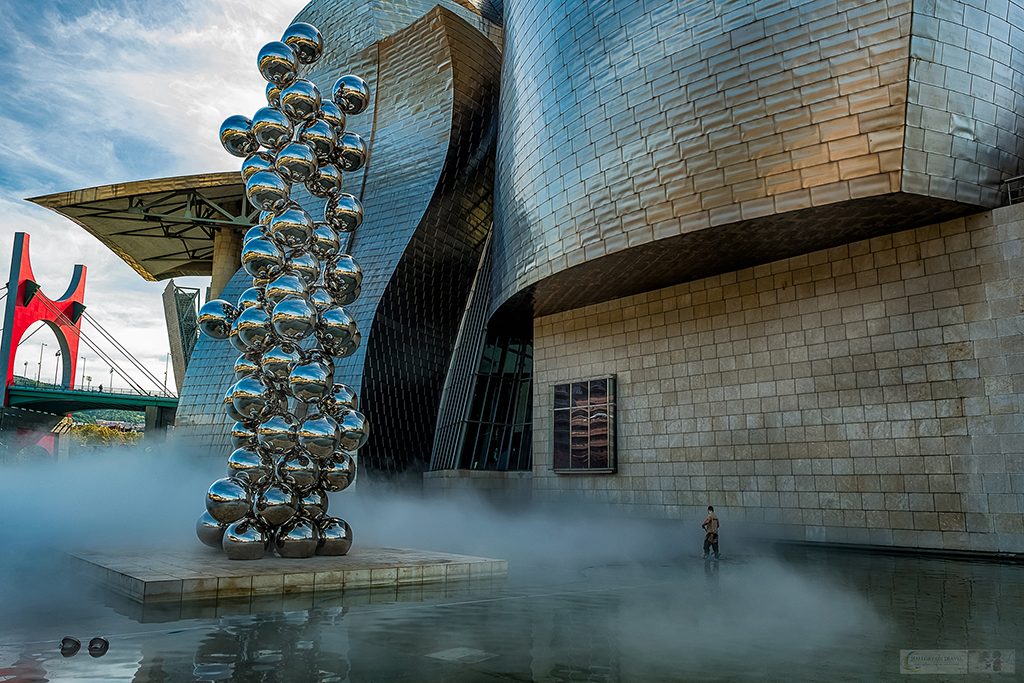 To be honest, I’m not a huge fan of some of the pieces; when a group of eight people all have a different interpretation of the same work of art, then I’d say it is too open to interpretation, but hey I’m a Philistine! There were some original and thought-provoking pieces however, and it is an enjoyable and impressive museum to visit.

“The Barge” by Robert Rauschenberg a fascinating and eclectic mixture of photographs and media on a large silk screen was one I could have studied for hours, finding something new every time I looked back at it.

The various works of Neo-Expressionist Anselm Kiefer, especially “The Land of Two Rivers” also held me captivated, seeming to mix almost violent brush strokes with the use of zinc-plate electrolysis, providing each creation with texture and depth. 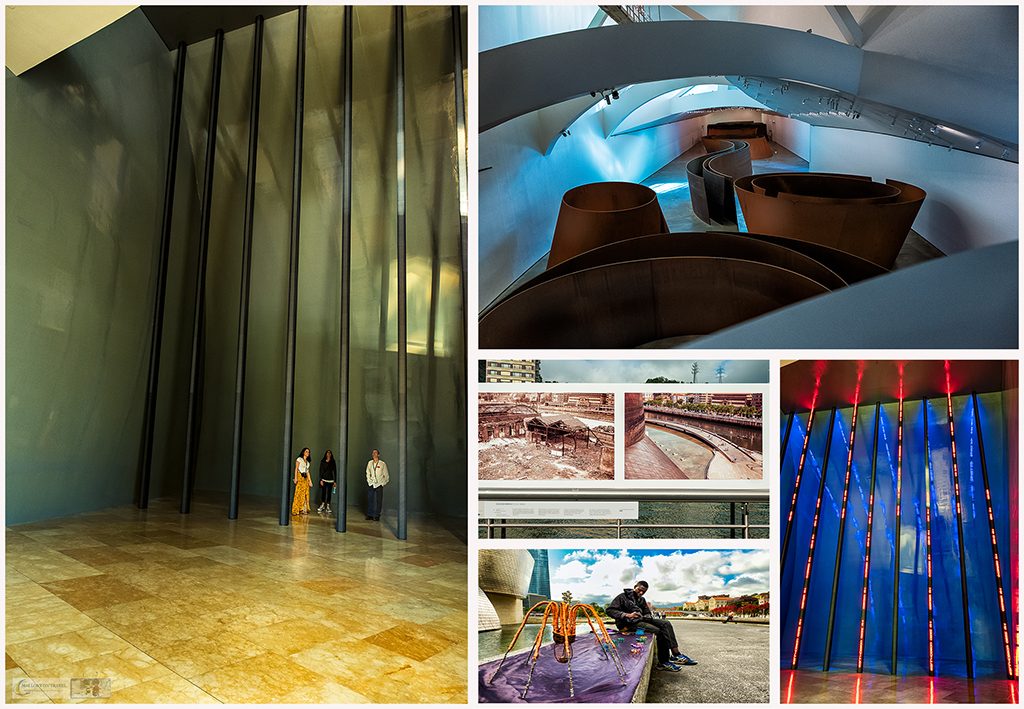 In and around the museum

As we left, there were still groups of people crowding around one of the most popular outside sculptures, “Maman” by Louise Bourgeois. They posed for photographs under the legs and egg basket of the giant, bronze mother spider; she appears familiar to me, sure I’ve seen her elsewhere. Enquiring with our guide he confirmed there were several more around the planet, including one outside the National Gallery of Canada, Ottawa.

Posing with the photogenic Maman

Like many creations there is a meaning, a story to her work, in her own words:

“The Spider is an ode to my mother. She was my best friend. Like a spider, my mother was a weaver. My family was in the business of tapestry restoration, and my mother was in charge of the workshop. Like spiders, my mother was very clever. Spiders are friendly presences that eat mosquitoes. We know that mosquitoes spread diseases and are therefore unwanted. So, spiders are helpful and protective, just like my mother.”

Even the nearby bridge, called the Arcos Rojos/Arku Gorriak by Daniel Buren is an exhibit!

There are also photographs and information boards illustrating the transformation of the area. Each board contains a before and after image, the run-down, disused industrial landscape before the restoration of the region and building of the museum, plus another after completion. They are fascinating, providing a remarkable glimpse of how one idea, when fulfilled correctly and creatively can completely transform, not only an area, but a city.

A guide to northern Spain: Slideguide to the Camino de Santiago (Norte)

The Guggenheim, Bilbao is the cultural heart of the city, yet it has become so much more than a museum. Surrounded by parks, recreational areas, other green spaces, bars and restaurants, bordered by the river and serviced by tram, bus and road links, it is a meeting place, a place to relax, to enjoy, to exercise, to spend a few minutes or several hours.

It is the beating heart of the city, attracting visitor and local alike; the Guggenheim, one of the largest museums in Spain is the pride of Bilbao.

*Photography is restricted inside the museum, so unfortunately there aren’t any images of permanent collections.

I visited Bilbao and the Guggenheim as a guest of the Basque Country Tourism Board, but as usual, all opinions are my own, formed while browsing the eclectic exhibitions of the museum.