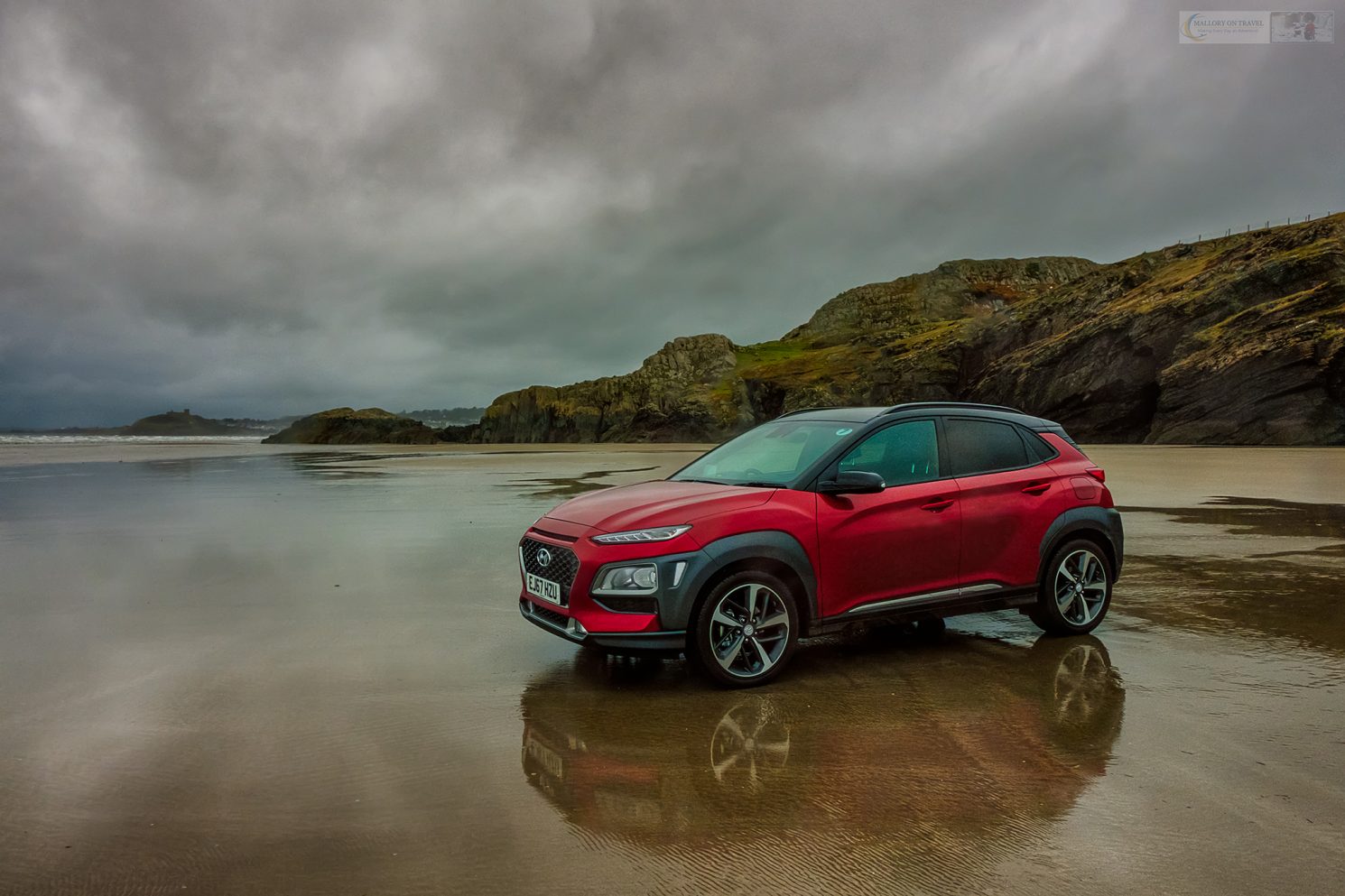 It was already dark and lashing it down with rain, but the lights from the Hyundai Kona behind us on the Miners Track up Snowdon showed there was a steep drop on my side of the car! The convoy had set off just before dusk, and due to the wet weather and heavy mist had almost been called off, yet we were disturbed from sipping our hot chocolates in Mallory’s (yes, honestly) coffee shop at the Pen-y-Pass hostel and told to jump into our vehicles. 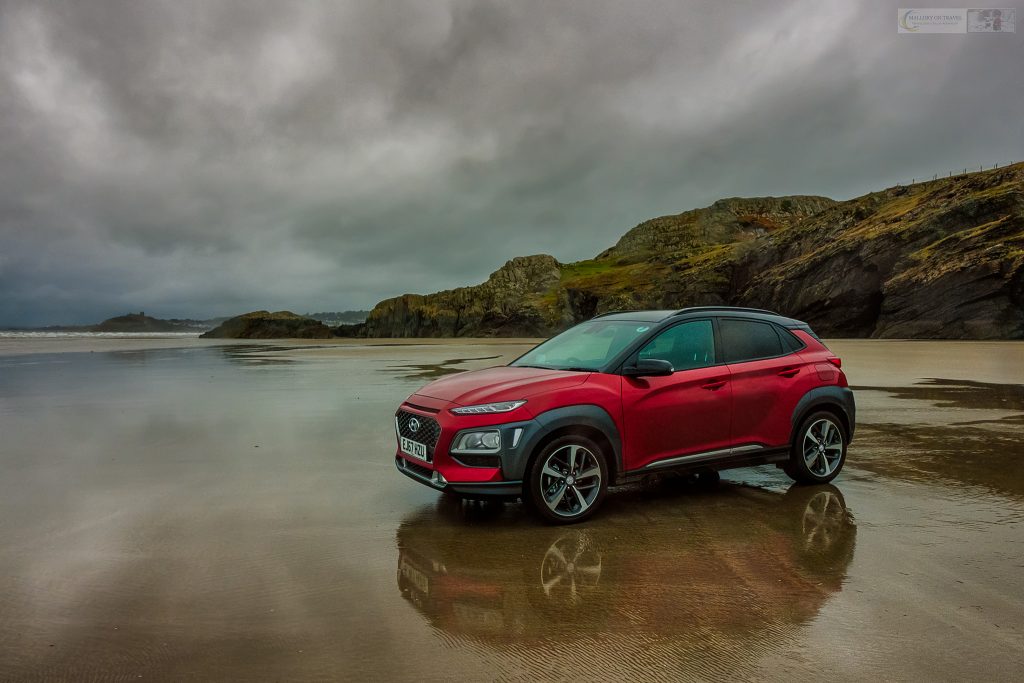 So there we were inching our way back down the track, after the drive up to Llyn Llydaw, keeping the Kona away from that drop. It’s not that I was worried about getting injured, but how would I explain all the scrapes and scratches to the man from Hyundai?

After a weekend on Anglesey, the day had started with a pleasant train ride from Bangor to Chester to meet up with the Hyundai PR team and an assorted group of journalists and bloggers. Covering the automotive industry, lifestyle and of course yours truly from the world of travel. After arriving at the hotel, we had the idea behind the concept and the itinerary for the day explained, before jumping into a brand spanking new Kona. 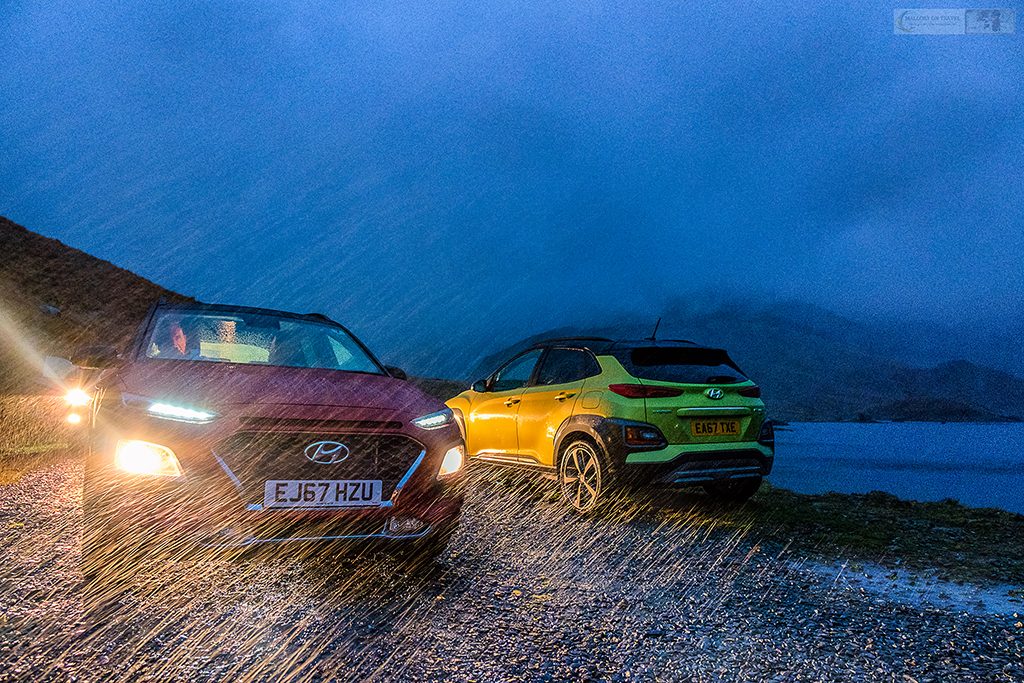 Basically, we were there to kick off the Hyundai Kona 10 Challenge, in support of Stand Up for Cancer. The challenge consists of a 72-hour adventure taking in 10 iconic volcanic landscapes of the United Kingdom and Ireland, including their highest peaks climbing over 12,000 feet in total.

Fortunately, we were just there to see young adventurer Sophie Radcliffe off, and wouldn’t be required to do any running up mountains, like Snowdon, Scafell and Ben Nevis in all kinds of inclement weather. We were just there to experience the Kona SUV in the lovely landscape of Snowdonia, even if the weather wasn’t playing ball.

Taking the Kona for a spin

The morning had been quite promising, setting out from Chester, into the country roads of North Wales in bright sunshine. However, by the time we were navigating the winding roads of Snowdonia the heavens had opened.

As well as some small country roads and the mildly disturbing drive up the Miner’s Track, we’d also had the opportunity to take the Kona for a spin on the empty beach at Black Rock Sands. Although we were supposed to keep the speed below 10 miles an hour, my speedometer must have been broken, enjoying splashing the SUV through some shallow pools on the beach, the spray flying high over the vehicle. 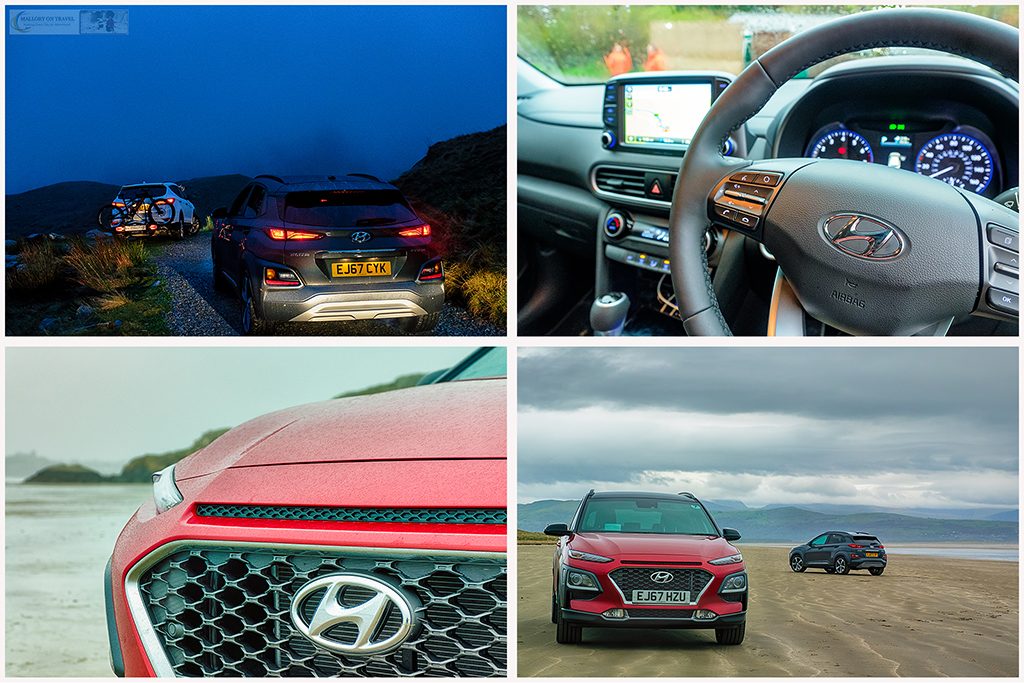 Driving the Premium SE model, the 6 speed Kona is a pleasure to drive, I really enjoyed it, surprisingly responsive and nippy for a 1.0 litre TGDi petrol engine. The trim is well put together and it is also extremely well equipped, with a premium in car entertainment system, satellite navigation and collision warnings all round. Anyway, I’m not an automotive journalist, so that’s the review! 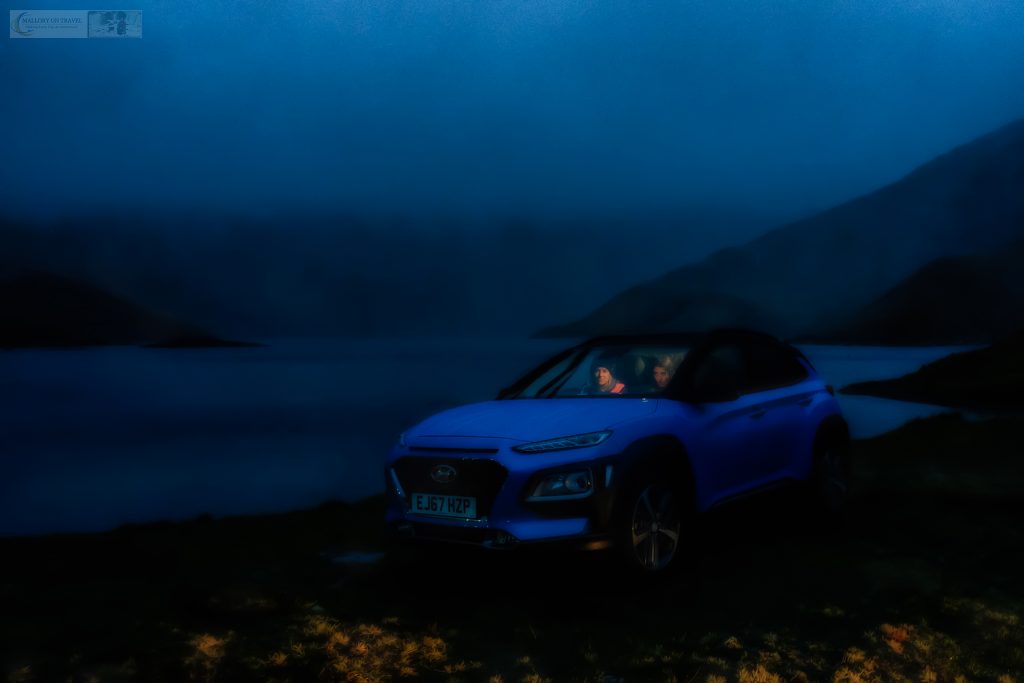 Having enjoyed an exciting day scooting around the roads, beaches and tracks of Snowdonia and North Wales we spent the night glamping in a tipi village at the campsite at Lyn Gwynant. There may have been a bit of a party with cocktails and Penderyn welsh single malt too, but that’s hardly worth mentioning.

Sophie is a remarkable young lady, who doesn’t consider herself an elite athlete, but if you look up some of her adventures it’s likely you’ll disagree. Her love of the outdoors is clear, and she considers one of her greatest achievements and challenges introducing other young people to the benefits of the mountains and the outdoors. She is a likeable young woman, with a steely grit which belies the usual blonde stereotype.

Yesterday, we received the news that she had successfully completed the Kona 10 Challenge, and that Hyundai had declared the challenge now officially open.

Here’s a summary of the press release from Hyundai:

Congratulations to Sophie on completing the formidable challenge the KONA 10. Pleased she had a stunning sunset on Snowdon too, which made up for our less than glorious ascent to Llyn Llydaw a week or so earlier.

London city worker turned adventurer Sophie Radcliffe has successfully completed the inaugural KONA 10 challenge, battling snow and 50 mph winds to climb a total of 12,000 ft. in an epic 72-hour journey across ten of the most iconic volcanic landscapes in the UK and Ireland.

The KONA 10 volcanic landscapes have been curated by historian Dr. Michael Scott to shed light on the little known volcanic history of the country and the extraordinary human activity inspired by these landscapes over millennia.

The KONA 10 challenge involved the all-new KONA from Hyundai, a compact SUV with bold design.

A stunning sunset on Mount Snowdon, Sophie drove the Miner’s Track, not normally accessible to the public for driving, before taking to her feet to reach the first summit.

A scramble up North Berwick Law, in the dark with rain lashing down, making the rocky conditions underfoot treacherous.

Reaching the summit of Ben Nevis, 52 hours into the challenge, eight locations down and temperatures of -10 degrees Centigrade with wind chill factor.

Tackling the Bla Bheinn on the Black Cuillins of Skye, then abseiling down to complete the challenge just 69.5 hours after the start.

Total miles driven: 1,046 – the equivalent of driving from North Wales to Paris and back again!

The KONA 10 route is now available to the public, for those interested in the volcanic history of the UK and Ireland.

I was invited to experience the Kona by the Hyundai public relations team, but did not receive any payment and all opinions are most definitely my own. 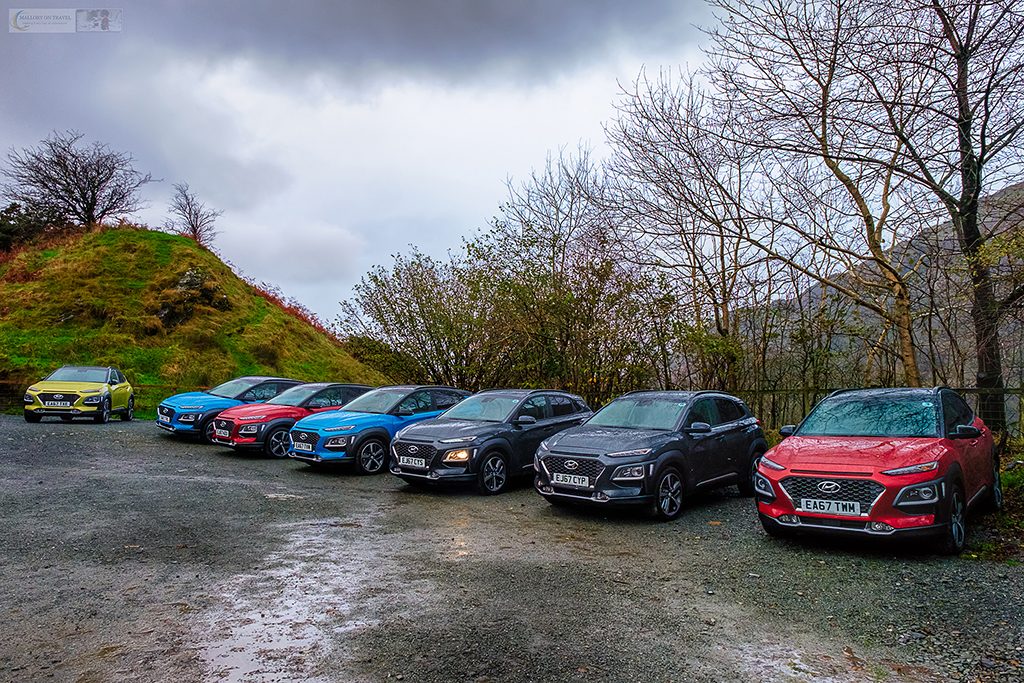