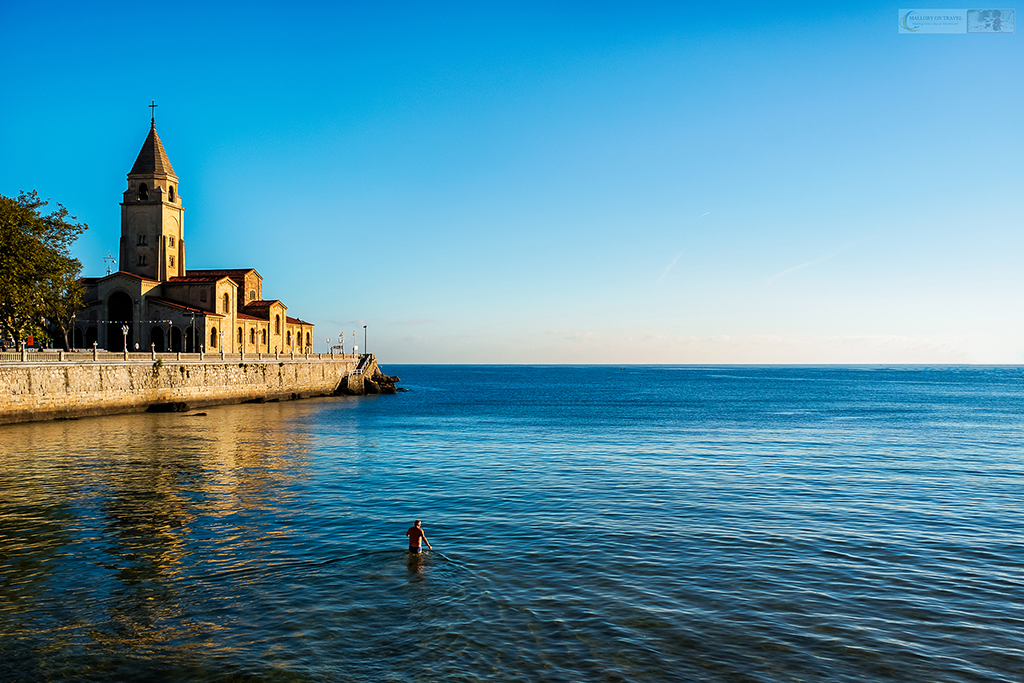 The four regions of northern Spain, known collectively as “Green Spain” are the Basque Country, Cantabria, Asturias and Galicia. Blessed with miles of coastline, there are sandy beaches, and spectacular cliffs, high mountains, attractive villages and some beautiful cities. Yet, in a place of great beauty, after a recent visit it is the people which will remain with me most; passionate, resilient, practical, enterprising and with a sense of humour. 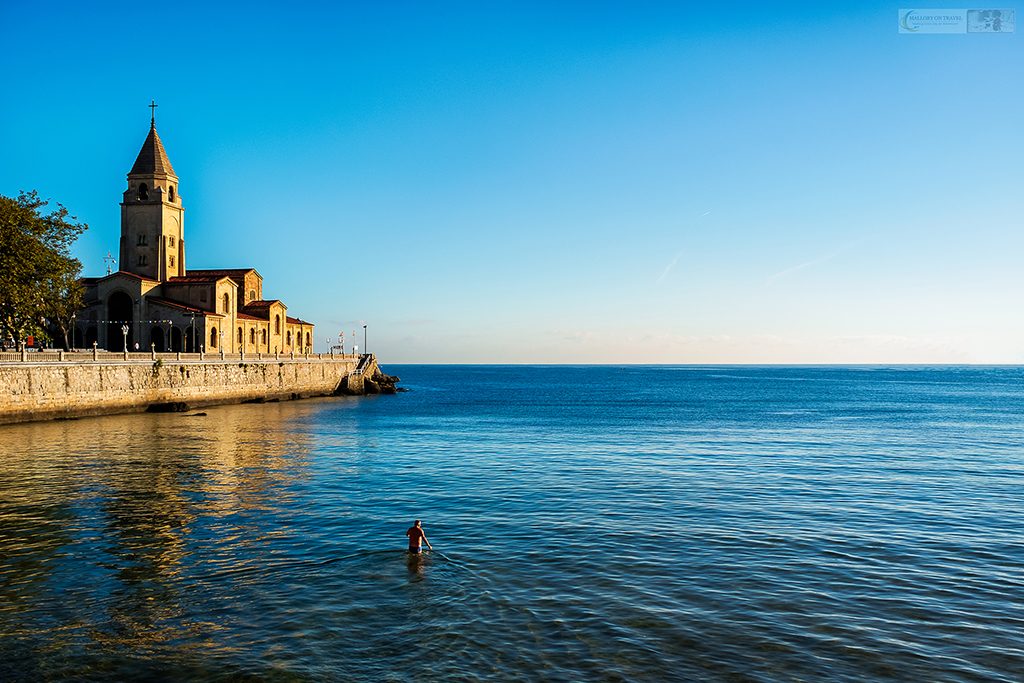 No mad dogs, but a brave Spaniard

Meeting people with a vision, the passion to follow a dream and the hard work ethic to make it succeed. Spanish people have a passion for food and wine, and we met several which had taken this a step further, working their own wineries, turning their passion into a livelihood.

Small affairs, that could almost be described as ‘craft wineries‘, usually using traditional methods and producing just a few thousand bottles annually. Family run, with the help of friends, lawyers, doctors and psychiatrists working the vineyards in their spare time, picking and selecting the best grapes, producing wine they can be proud of. Initially produced for personal consumption, but the more successful often beginning to produce wine which is in great demand. 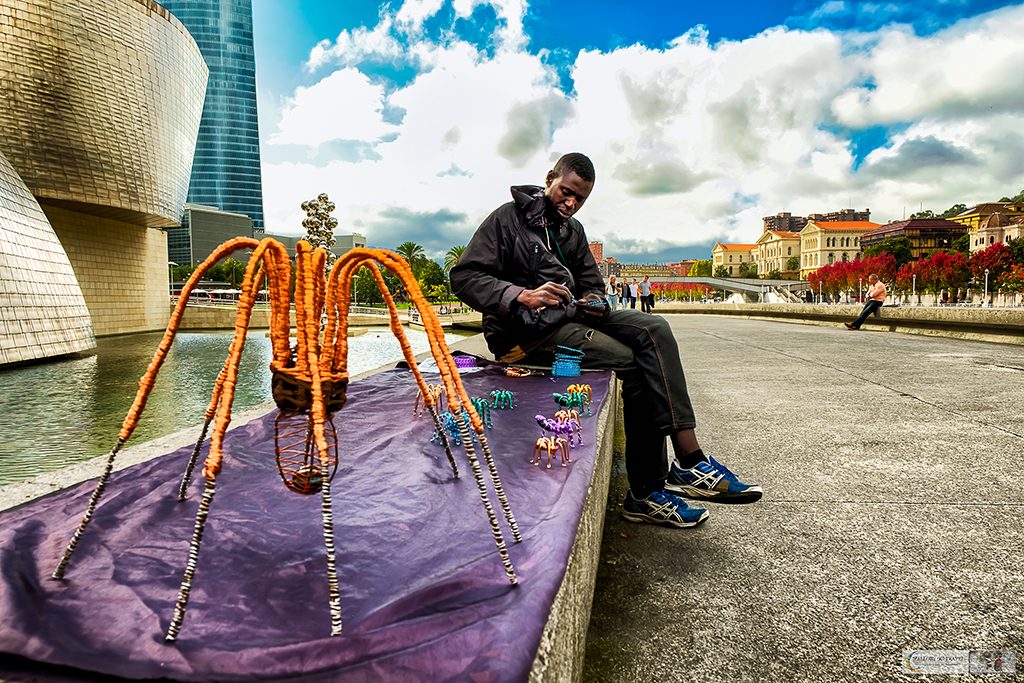 Artisan outside the Guggenheim Museum, Bilbao

We met a couple of brothers at the Bodegas Vidula winery in Cantabria, with an infectious enthusiasm for wine, they didn’t stop laughing throughout the visit. Dad dropped by too; the apples hadn’t fallen far from the tree, a character that we were all instantly drawn to. There was also a purple Volkswagen camper parked outside, which attracted plenty of attention, especially when the brothers explained their plan to turn it into a “wine wagon” at events throughout Spain. 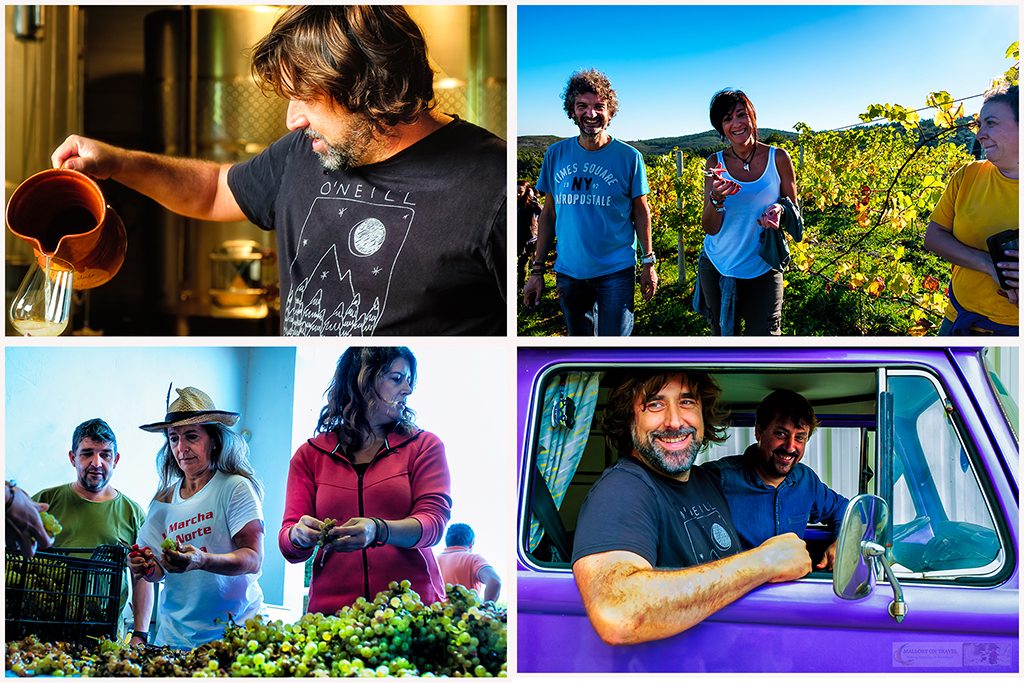 Among the grandiose furnishings of the Palacio de la Peña, Ajo we met the slightly eccentric architect and owner Jose Manuel. While guiding us around his ‘palace’ he explained how he came to own this one of a kind luxury hotel. 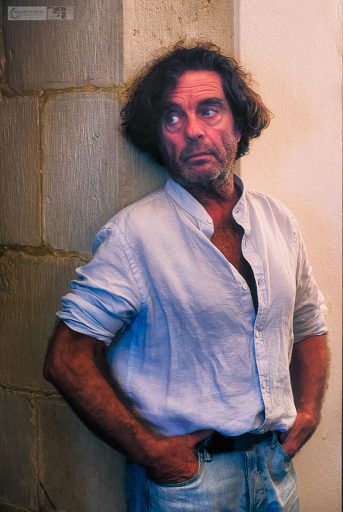 The story goes something like this; “One morning, hung over after a heavy night drinking he headed to a local shop for some cigarettes, where he found a realty magazine, with a small image of the palace. He instantly decided to buy it, and when viewing it repeatedly told the sellers they were asking too low a price, in fact, slightly irritated by them under valuing of the property. However, he did eventually purchase it, then subsequently forgot about it for a year, not even informing his girlfriend”.

A great story, that has almost certainly been somewhat embellished over time, but still quite a story and quite a character, the kind it takes to transform a rundown group of buildings into a palatial residence.

It wasn’t the only palace we visited, many were built by emigrants, that grew rich in the Americas. Fleeing conscription and poverty, they grew tobacco, mined for coal or traded in slaves, before returning home wealthy. Known as “Indianos“, they built lavish mansions, to display their wealth, planting a palm tree in the grounds, a “gateway sign”, as tribute to the lands which made them rich.

Despite some dubious origins of their affluence and one or two juicy rumours about uncles and nieces, they often overcame their colourful past with acts of philanthropy. Many a school, library or hospital once bore the name of an Indiano, who donated funds for it to be built, they are not cause for shame, but reason for celebration. 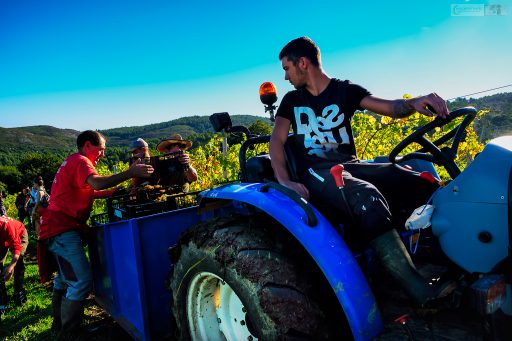 It should be clarified that not all Indianos became wealthy, many returned home penniless and most weren’t involved in slavery. Thankfully enough did, as their stories enrich the history of the region. For those interested in learning more, a visit to the Indianos Archive in Colombres is recommended.

The northern Spanish are a hardy breed, swimming is a popular morning pastime; I witnessed a lady wade into a cold bay on a rainy day at San Sebastian and a mature gentleman complete a thorough warm-up before entering the lovely water at Gijon. Singing loudly in the clear air of early morning once the water rose above the waistband of his flattering Speedos.

A fair dollop of the hardiness, some of the passion and most of the eccentricity can be attributed to their links to the Celts, especially in Galicia and Asturias. Along with the Scottish, Irish, Welsh and Cornish this region is sometimes known as the ‘fifth Celtic nation‘. They play bagpipes, which in this part of the world are called Gaita, and it is possible that Galicians were the first people to wear a kilt!

Cycling near Llanes: Life on the Camino; Cycling in Asturias 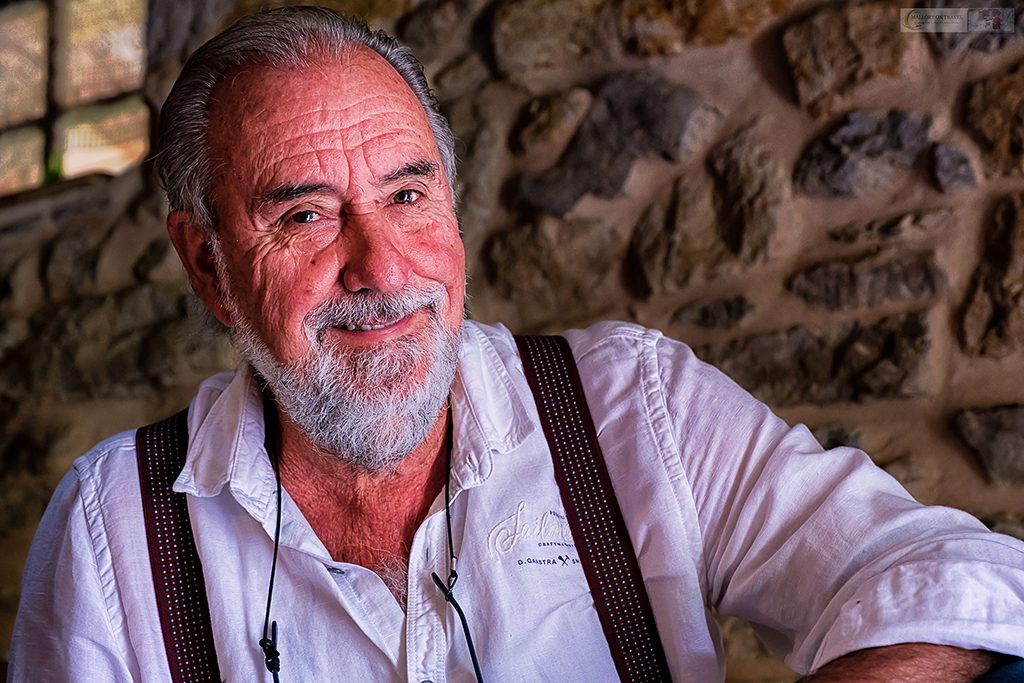 We were fascinated by the history lesson given to us in perfect English with a clipped accent by Manuel, owner of the Pazo de Galegos winery, Vedra in Galicia. The former residence of D. Antonio Lopez Ferreiro, an accomplished writer, Canon of the Cathedral of Santiago de Compostela and discoverer of the tomb of St James. Quite a guy and Manuel was obviously proud of the heritage of his winery.

He then guided us around the estate like a fatherly school teacher or perhaps a fatherly sergeant major!

From mothers shopping in markets to cider servers in traditional sidrerias, family run wineries to eccentrics in palatial hotels. Owners of wineries/museums with encyclopedic knowledge of local history to children playing in village streets, even the harbour cleaner in Gijon, we bumped into a variety of fascinating characters. Some were planned, most were by chance, but each left an impression. 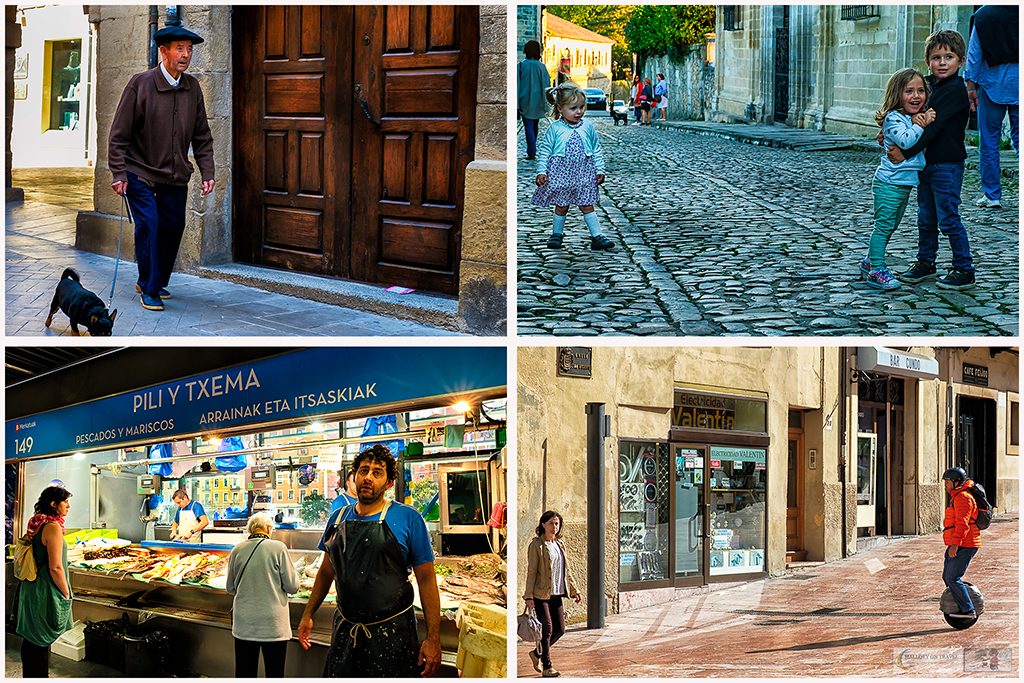 A day in the life of Green Spain

It’s easy to be drawn to passionate people, their enthusiasm, positivity and irrepressibility can be infectious, maybe we hope some may rub off on us just by being in close contact.

A guide to Green Spain: Slideguide to the Camino de Santiago (Norte)

The people of Green Spain are products their home, a mountainous landscape with mile upon mile of mixed coastline, yet it is the people that have shaped the character of this region of Spain. A proud people with a culture of passion. 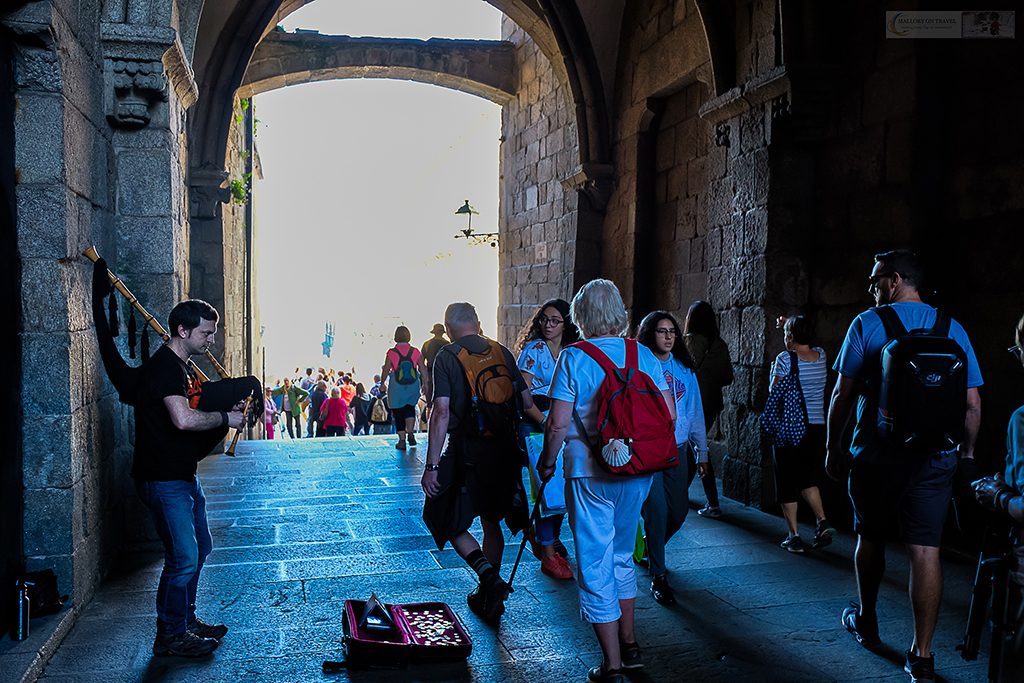