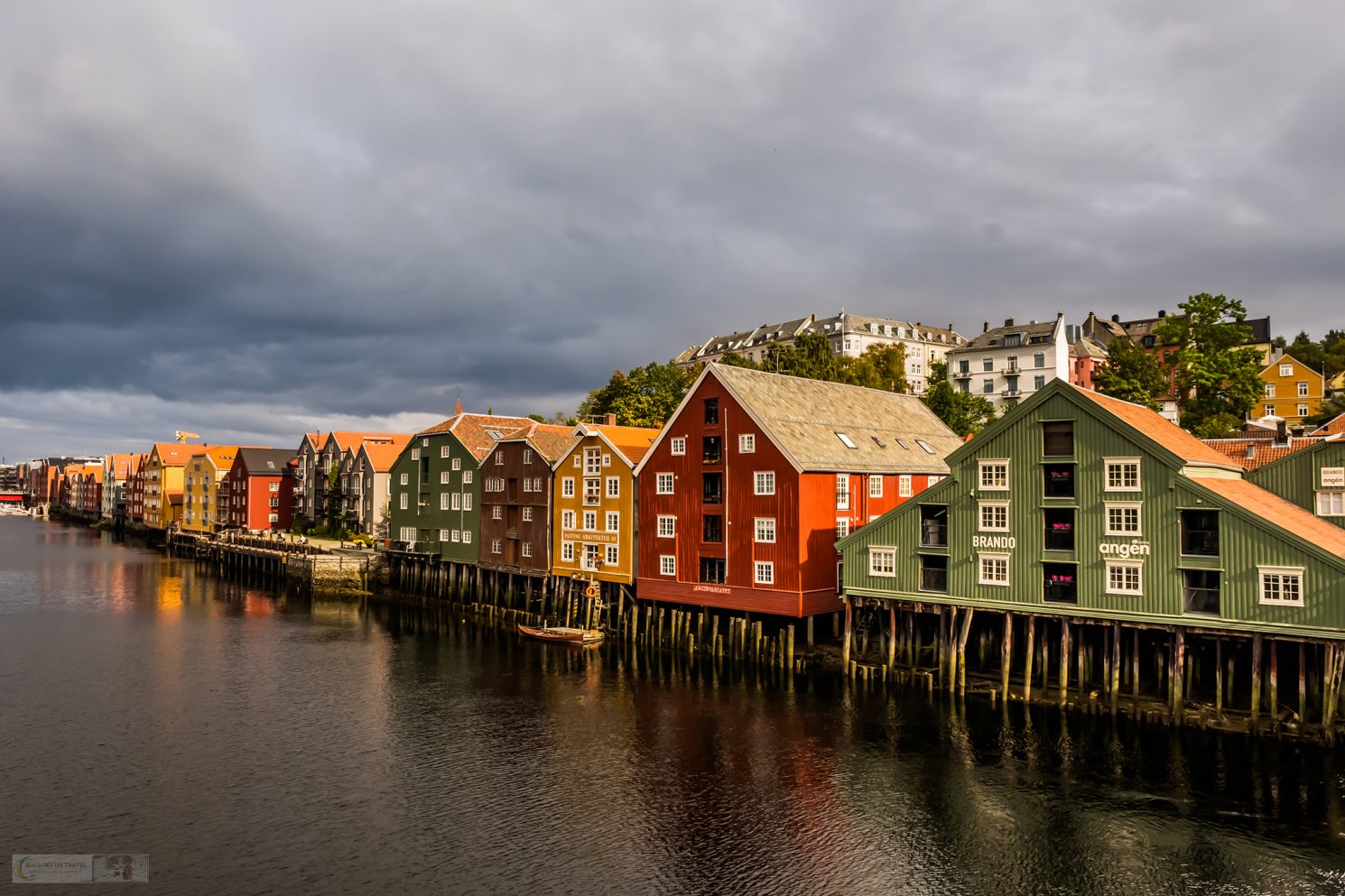 Strolling across one of the numerous bridges in Trondheim, a sign caught my eye, actually, a single word on the sign grabbed my attention “Pride”. In a colourful city of multi-hued warehouses, now converted to fashionable apartments, restaurants, bars and coffee shops, it seemed the perfect place to experience a gay pride parade for the first time. 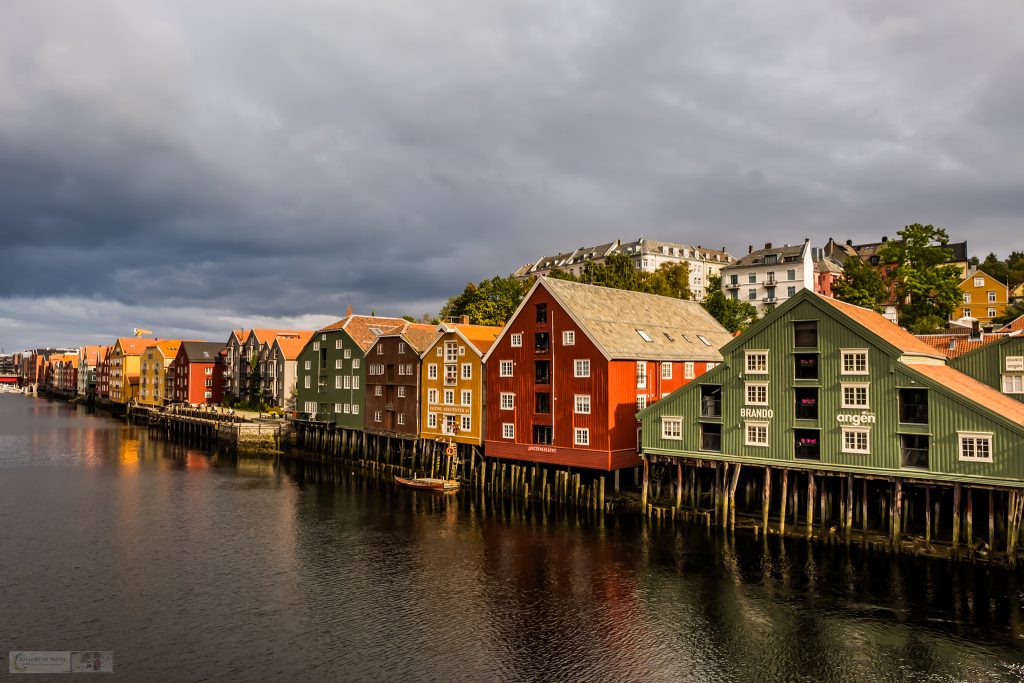 I set off down the main street in search of loud music and gaudily costumed people waving rainbow flags, generally having a great time. It didn’t take long to cat up with the revellers, holding their street party in the city centre. It probably wasn’t the largest pride parade on the planet, but size isn’t important, having fun while making a statement about sexuality and tolerance is! 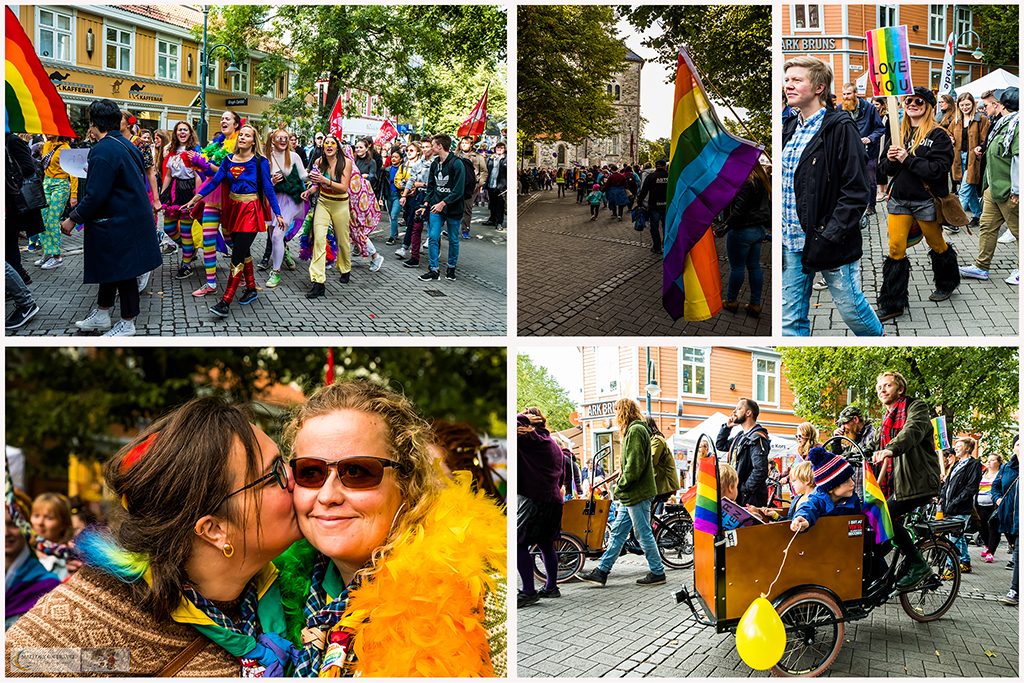 Discovering Norway by cruise ship: Confessions of a Cruise Virgin

Trondheim expressed its individuality and acceptance of the rights of everybody to choose in a joyous and vibrant parade which culminated in a raucous concert in the market square. The weather changed and a heavy drizzle descended, yet nobody seemed to mind, or allow it to dampen the spirit of the event.

I was extremely pleased to witness “Pride” in Trondheim, it’s a city with character, and history. One of the oldest in Norway, the original capital and believed to be the resting place of Saint Olaf, the patron saint of the country and the “eternal king“. To many residents it remains the capital.

Slightly later, I bumped into a couple, Bendik and and Em walking their wippet, Raoul. Looking resplendent in colourful woollen socks, he looked especially dashing in a top hat and tails, even Raoul was debonair in his city coat. They graciously obliged when I asked for a picture, posing patiently and explaining this was the way they dressed every day. Like I said, the city has character, if not slightly eccentric!

Eccentricity and character seem to ooze from every corner of Trondheim

Built on the side of the Trondheimfjorder, there are several waterways, and the River Nidelva, leading away from the small harbour and pretty lighthouse. It is along these quays and wharfs that the colourful warehouses are found, many built on stilts right above the water.

A City with a Colourful Character

They somehow seemed typically Norwegian, painted in a variety of shades, reds, yellows, greens and ochres, they are just so photogenic and I found myself drawn to them in all parts of the city. They were so captivating I didn’t find time to visit the famed “Rockheim” museum. Dedicated to rock music it was high on my list of places to check out, but although I made it inside, time was against a browse of the exhibitions.

Many have been restored and although some still act as warehouses, others have been converted to attractive waterside accommodation or chic bars and restaurants.

Norwegians drink more coffee per capita than any other country, so it isn’t surprising that Trondheim has plenty of fashionable coffee shops serving cappuccinos, flat whites and cortados to the cultured Norwegians and visiting tourists. Another reason perhaps that the city appealed to me so much, stopping regularly for my caffeine fix. 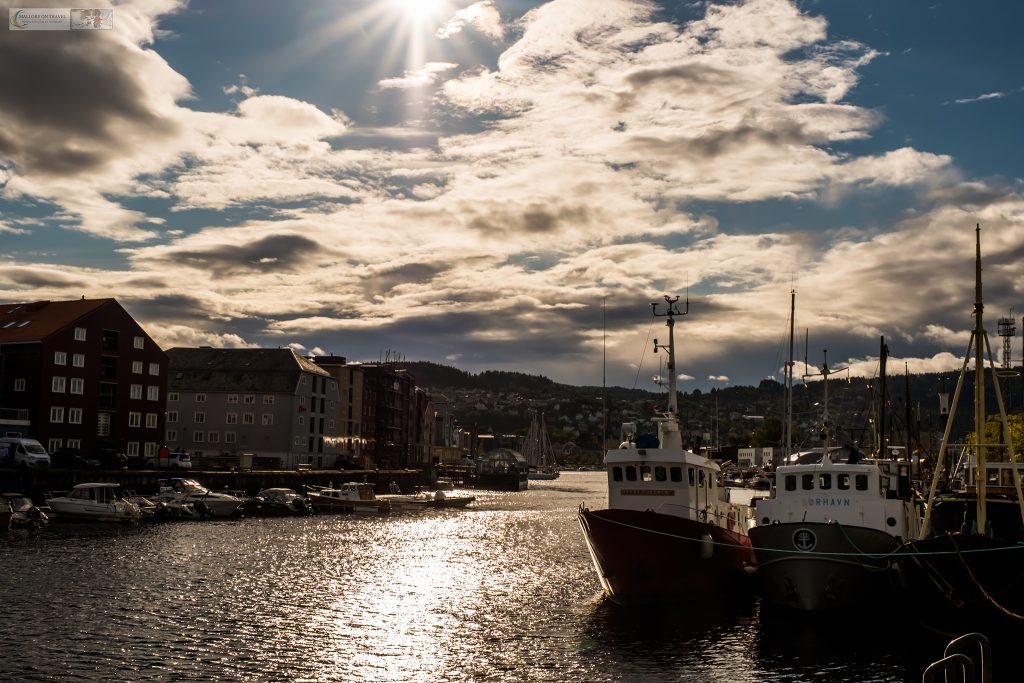 It is also quite spread out with numerous attractions and green spaces, but I still found myself wandering down narrow, cobbled streets or crossing quaint footbridges within a short walk of the main train station and the city centre.

Overlooking the city Kristiansen Fortress, built by the ruling Danes, in 1684, to protect Trondheim from attack from the Swedes, the two nations taking turns to occupy and rule over Norway until it gained independence in 1905. Joining my companions, I ventured up there for dinner one evening, enjoying a delicious meal and witnessing the strange bicycle lift in action; a quite unique contraction (I’ve never seen one before), which assists cyclists up the steep hill leading to the fortifications. Yet further proof of the eccentricity of the city. 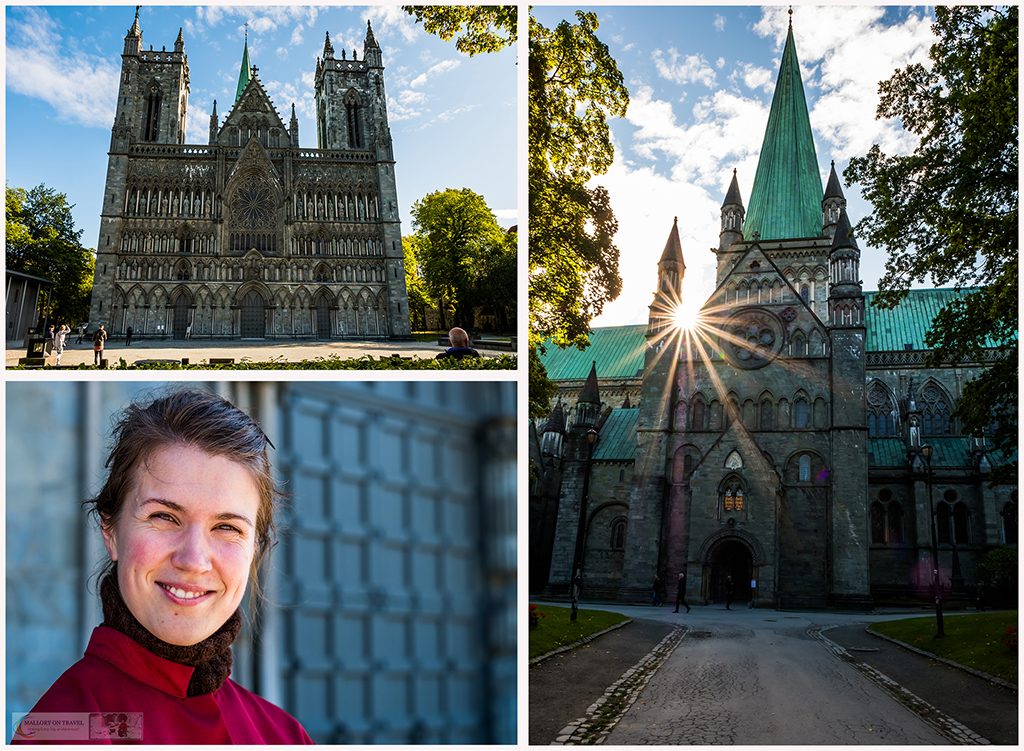 The Nidaros Cathedral grounds are believed to be where Saint Olaf was laid to rest, and is a centre piece of the city. It attracts plenty of tourists, many just wandering around, taking the odd selfie, but we chose to take a tour. Ingrid, our scarlet robed guide spoke perfect English, in a way I could only dream of emulating, clipped with the poshest of accents. However, she also knew her stuff, sharing some fascinating insight into the history of the cathedral, which is still being restored today, it’s worth taking the tour. 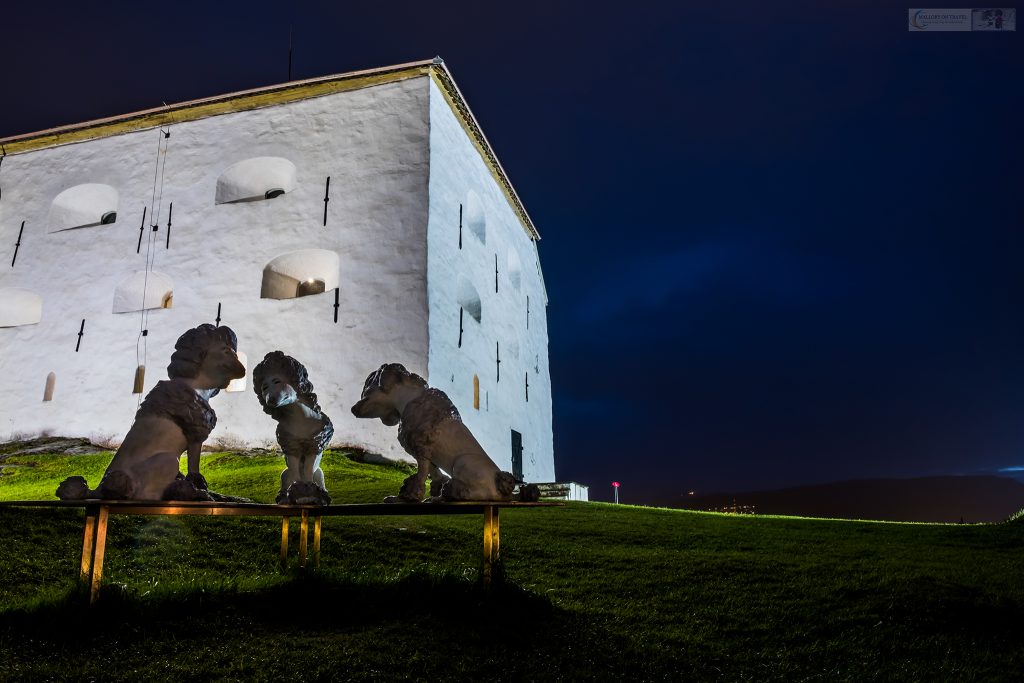 Messing About on the River

Returning to Trøndheim after spending a few days exploring the surrounding region of Trøndelag, which will be the subject of future posts, we enjoyed a relaxing kayak trip down the lazy River Nidelva. This provides a different perspective of the city, winding through some of the green spaces, with goldeneye ducks, herons and sea birds for company, before the numerous bridges and colourful warehouses come into view. A pleasant way to finish exploring Trøndheim.

Presentable, clean and rightly proud, Trondheim is a great introduction to Norway, easy to get along with and worth exploring to discover its true eccentric character. 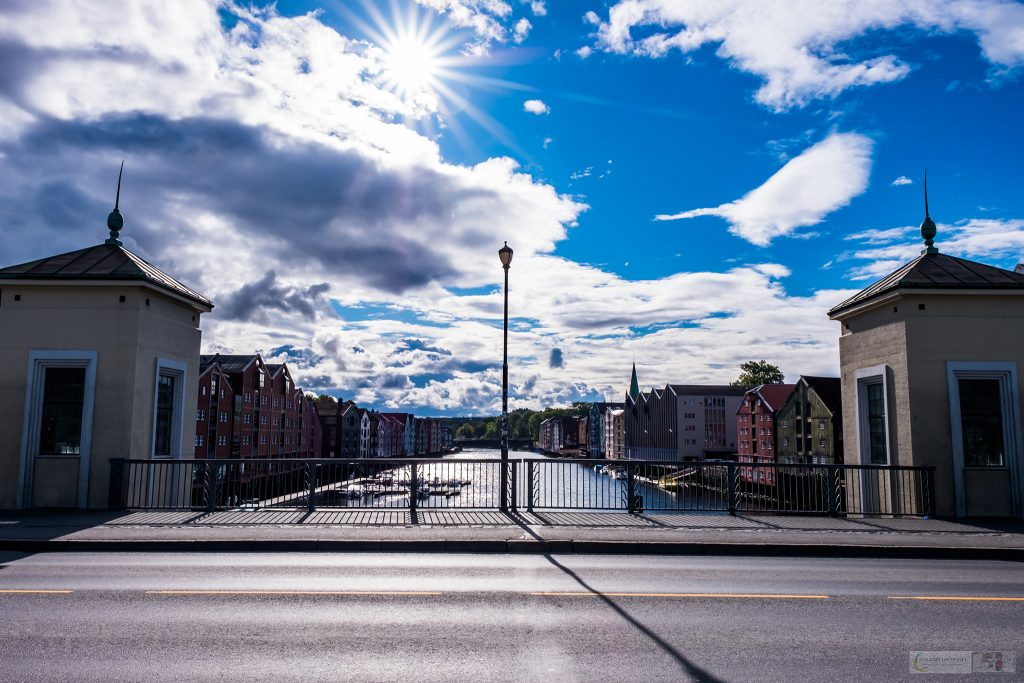 
Getting there – Norwegian, SAS and Klm all fly regular flights through hubs to Trondheim. A regular shuttle bus transfers to and from the airport to the city, stopping close to major hotels.

Sverresborg, folk exhibits and one of the largest open air museums in Norway.