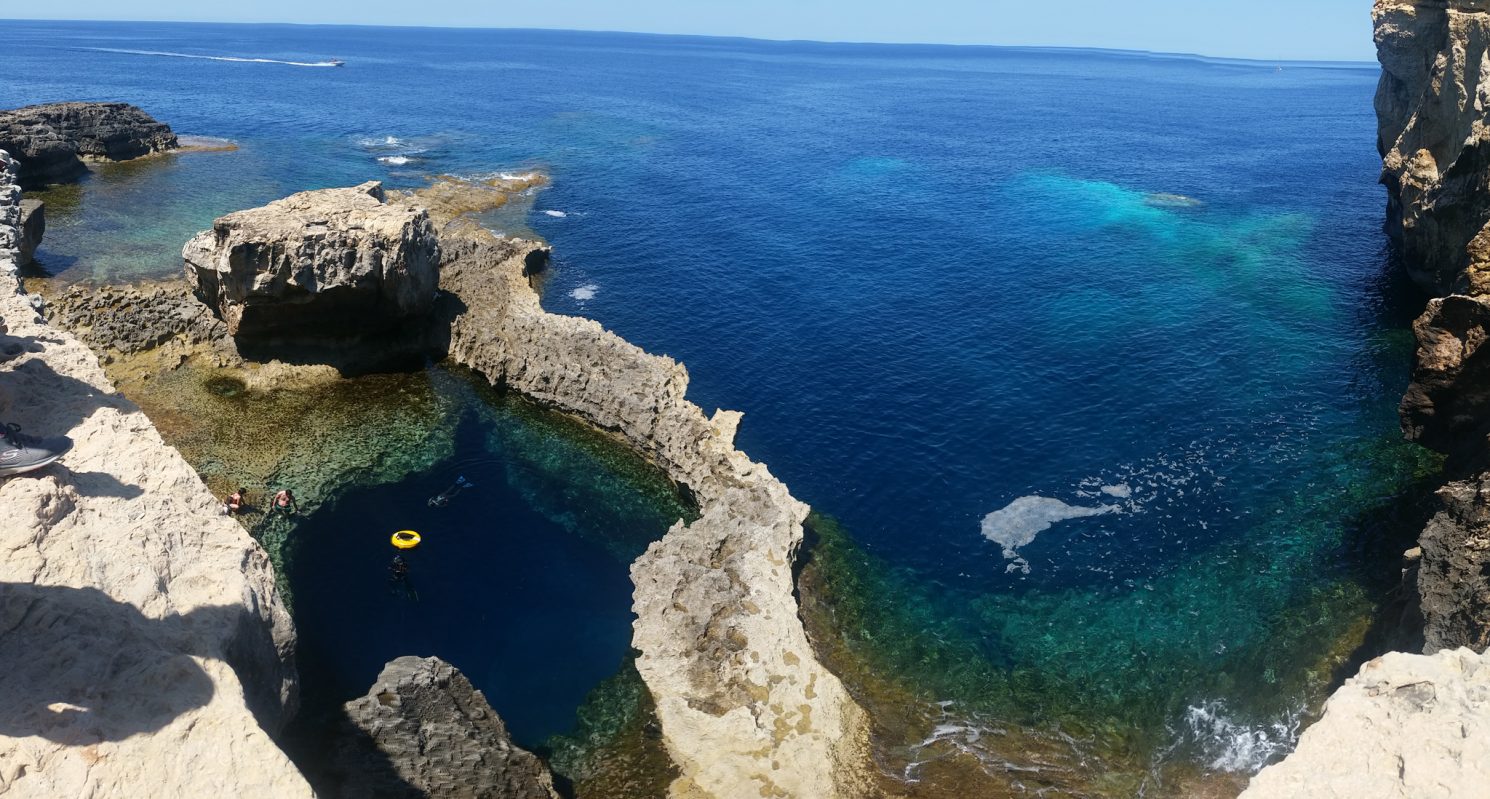 Malta is made up of three islands, Malta, Comino and Gozo. Our trip was focused on diving off Gozo but there was enough time for a walk round Mdina on Malta before heading for our ferry to Gozo.

The position of the island group in the Mediterranean Sea means that it has long been prized as a strategic asset. From trading routes to a military stronghold its unique position between the East and West, Europe and Africa has meant that it has been subject to many influences throughout its long history. Romans, Moors, Knights of Saint John, French and British. It has numerous fortresses, megalithic temples and the Ħal Saflieni Hypogeum, a subterranean complex of halls and burial chambers dating to circa 4000 B.C. The language is an odd mix of Arabic, with some French and the occasional Roman root word which can take it to almost Italian at times. Some place names on the islands have a distinct Arabian feel to them with Rabat, Zurrieq, Marsaxlokk, then you find St Julian’s, Victoria and yes, Slugs Bay. Paola, Floriana, Pieta. Its eclectic. 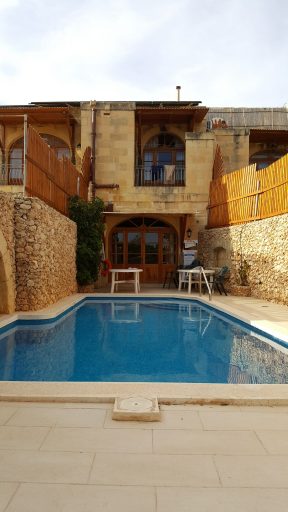 Malta is a clash of cultures, a clash of languages and clashes of architecture and food all in one place. I’ll be honest and say that my first impression was that of a dusty rock in the middle of a vast ocean. In May, the greenery of the winter months has already given way to the dusty, stony parched ground that Malta wears through to October, when the rains may come again. The fact that most of the buildings are also made from the same stone means that the whole island seems somewhat hewn out of this pale rock. If that was to be my lasting impression, it would be quite wrong. 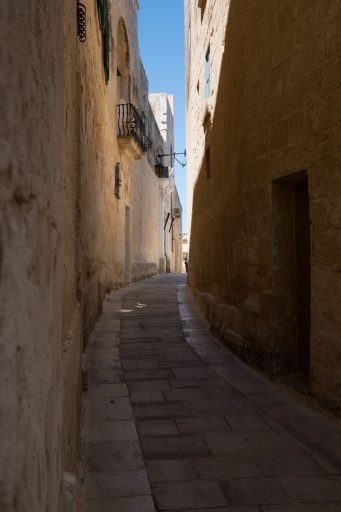 Our accommodation was in Xaghra on Gozo. The house is called Ta Salvu, we called it our “Big Brother house” Four journalists/bloggers and a representative of the Maltese Tourist Agency all thrown together in one house for a few days, what could possibly go wrong? The reason I mention our accommodation is that is it entirely representative of Malta itself. Very unassuming on the outside, a bare stone wall with a door in it was all that greeted us, but open that door, step inside and it’s a whole different world. What you see on the outside is most certainly not indicative of what is behind that door.

There is a simultaneous eschewing of the trappings of wealth whilst hoarding some of the finest wines I have tasted. Houses don’t appear much from the outside, it’s inside that they shine. Cars are the same, a means of transport, get you out of the dust and the heat. Most of them are covered in dust within a day anyway! There are some short stretches of smooth tarmac on Gozo but most of the roads are, yep, you guessed…made of dusty stone.

Did I mention the wine? Maltese wine is utterly, utterly superb! And for years they refused to export it! But the good news is that you CAN buy Maltese wine elsewhere on the planet now. The Marsovin vineyard adorns one of it’s ranges with labels of Carravagio paintings, so they are difficult to miss. Since Carravagio is my favourite artist (I love the lighting in his paintings) I’d happily plump for a bottle of that and admire the label as well as the wine. 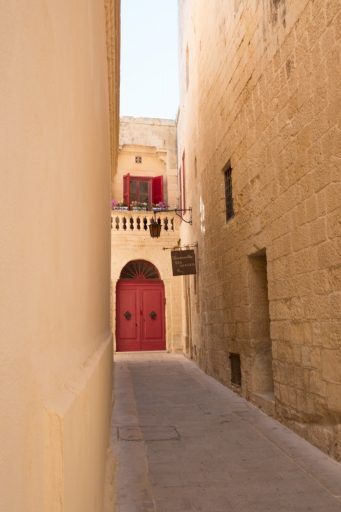 However, we were in for a real treat one night. After a full day of diving we are both tired and ravenously hungry. There is the dichotomy of getting back to the house and just wanting to relax but at the same time dinner is overdue. So a quick shower and pile into our transport and off to Ta’ Philip for dinner. Except we didn’t just get dinner, Philip Spiteri hosted us and explained his philosophy for his business. Already a successful manager, he decided that he really wanted his own place, done his way. A suitable property was acquired and a digger brought in to excavate beneath the existing building. Well, one needs a wine cellar for all those delicious Maltese wines! One temperature controlled cellar, one open kitchen with wood burning ovens and three levels of dining accommodation later and Ta’ Philip was good to go. 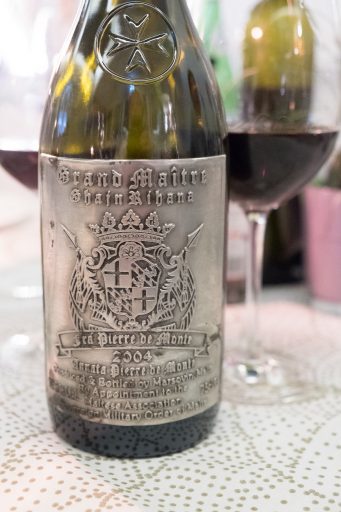 This is no ordinary restaurant though, oh no, Philip is the most demanding owner. The menu changes constantly using the very best local ingredients. He wants to bring “Made in Gozo” to your table and after several courses of simple but stunningly cooked food, all I can say is thank you to Philip for an unforgettable evening topped off with a bottle of this from 2004. WOW! If you are ever on Gozo and are looking for a special night out, book Ta’ Philip and budget for some good wine!

Almost everything you can find about Malta has one of it’s defining landscapes on it, The Azure Window. Even if you have never visited Malta, or never been to Gozo, you would recognise it immediately. At 9.40am on the 8th March 2017, after a period of heavy storm, the Arch, and the pillar supporting it collapsed into the sea. The Azure Window was gone.

You can see the light seabed where the Azure Window now lies, it was previously attached to the cliff on the right. The pool of water on the left is called The Blue Hole and you can descend in The Blue Hole and dive out under the rock and onto the site of the Azure Window. It’s a truly magnificent sight down there and we were extremely fortunate that the site has been declared safe to dive, huge chunks of limestone the size of a house moving about down there isn’t something to be desired! The difference between the existing seabed and the newly arrived limestone is amazing, as is the sheer size of some of the rocks. 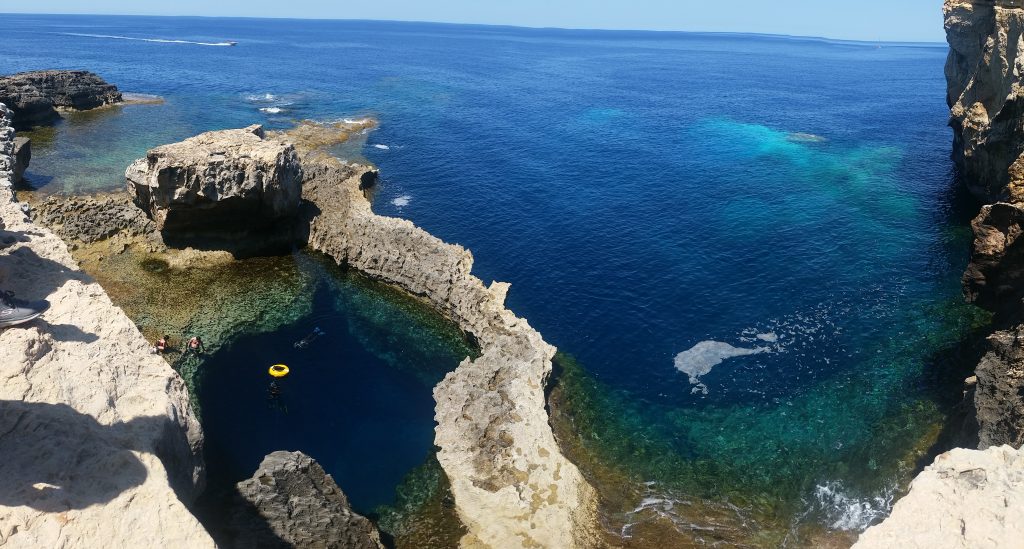 A diving expedition on the island – In at The Deep End, Diving Malta

So to sum up Malta, it’s an absolute gem of a place. You need to search, work hard for her affections though, it’s not simply on the surface. Whether that is the diving, the architecture, the culture or the food and wine. It is necessary to get below the surface and dive right in! 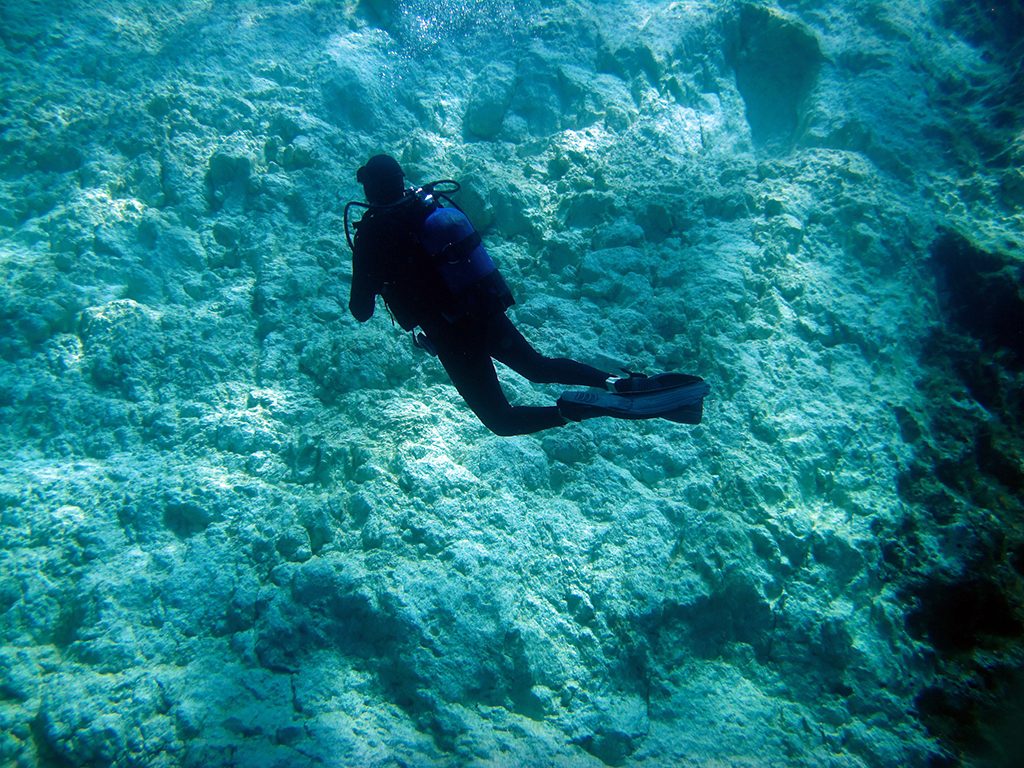 Diving over the collapsed Azure Window