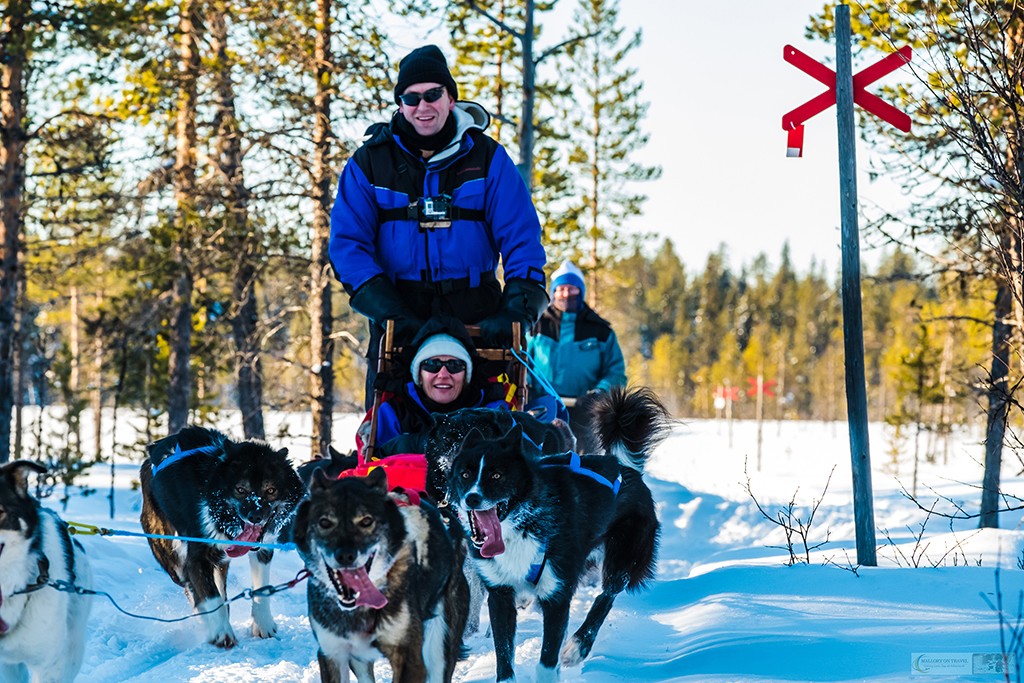 The remainder of the dog sledding group were huddled around the table, receiving the safety briefing from our guide, Brenda. Already ensconced in their thick, puffy over suits and woolly hats, like a meeting of Michelin people, conspiring to replace sled runners with tyres perhaps. Brenda explained what to expect from our experience, possible issues with the dogs and how to react. 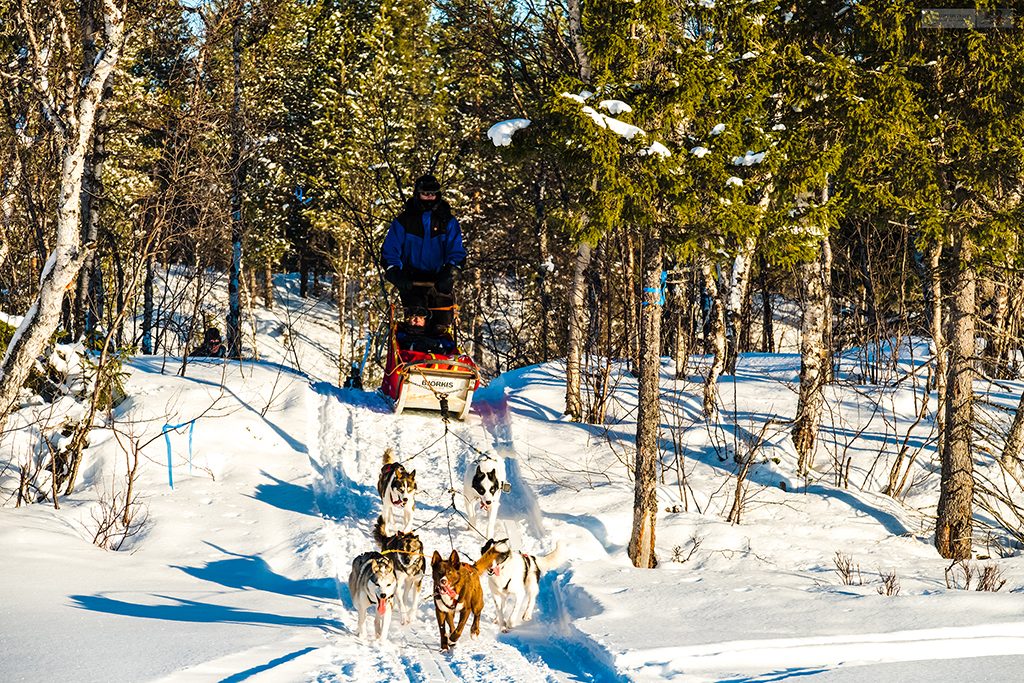 Out of the woods

She also informed them she had didn’t have any idea what I would be doing, quick confirmation was provided that neither did I. It seemed that my mode of transport would be a trailer behind Brenda’s snowmobile, which incidentally would also be carrying lunch. This was the compromise needed to ensure I could take some photographs, but it also seemed sensible to apologise in advance, in case lunch went missing somewhere along the trail!

It was time to meet the dogs, which are heard long before they’re seen, excited yaps, barks and even the occasional howl fills the clear winter air around Lapeasuando Lodge. By the time, we arrived some of the dogs were already jumping about, straining at their leashes in excitement, while others were the definition of cool, barely batting an eyelid, some yawning, while others slept in the sun. 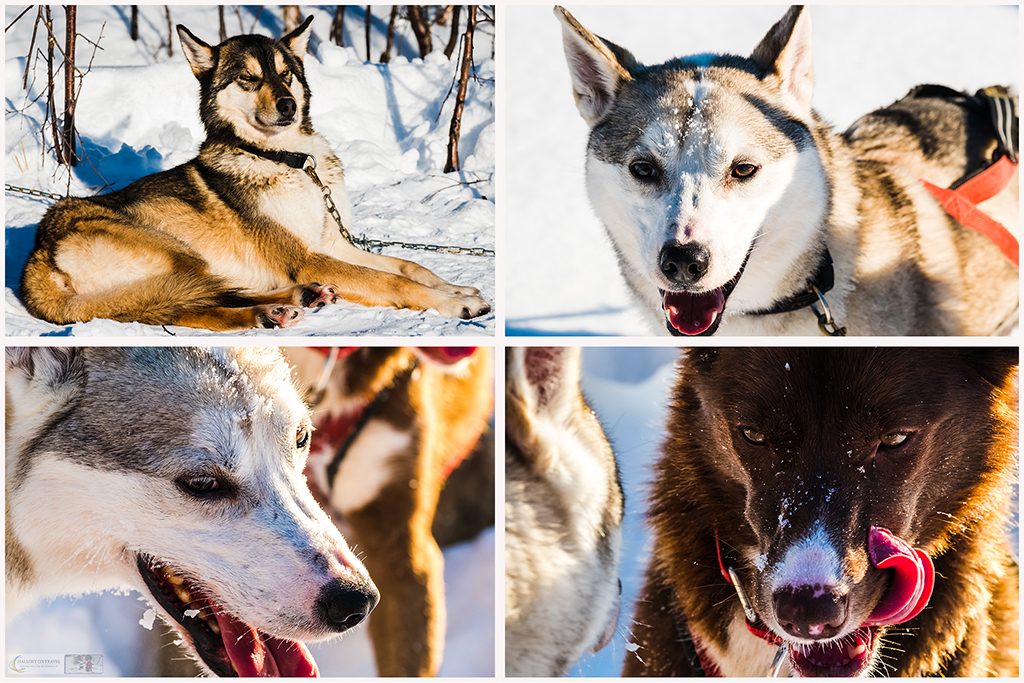 Bring on the hounds

Once the harnesses were fitted and they were attached to their sleds, they all seemed eager to get going. These beautiful dogs are built to run, showing disinterest when inactive, but as soon as they take the strain, feeling the weight of the sled, as they begin to overcome inertia the dogs come to life. This is when they are happiest.

It is believed sled dogs probably originated in Mongolia almost 35,000 years ago. Modern sled dog breeds were bred for transportation of goods, hunting and have played an important role in the history of exploration to both the North and South Pole.


Roald Amundsen is thought to have used 97 dogs in his successful expedition to the South Pole.

Huskies are prized for their speed and power to weight ratio, while Malamutes are considered the best for endurance.

Dog sledding is a great way to experience the beauty of the Swedish landscape, especially for the passenger. Without any responsibilities for driving the sled, there’s plenty of time to sit back and enjoy the scenery.

The snowmobile and sleds breaking their own trails through the pristine snow, following the fire breaks through the sparse forests. At times Brenda, chose to beat her own path, weaving a way through the snow laden trees, the branches sagging under the weight, occasionally dumping their load when nudged by a dog or rider. The dogs chasing her snowmobile, straining at their leashes, attempting to catch up.

Mile upon mile of pure white snow, our trails stretching far into the distance behind us. The only signs of man in this wilderness are the occasional log cabin or fire tower. 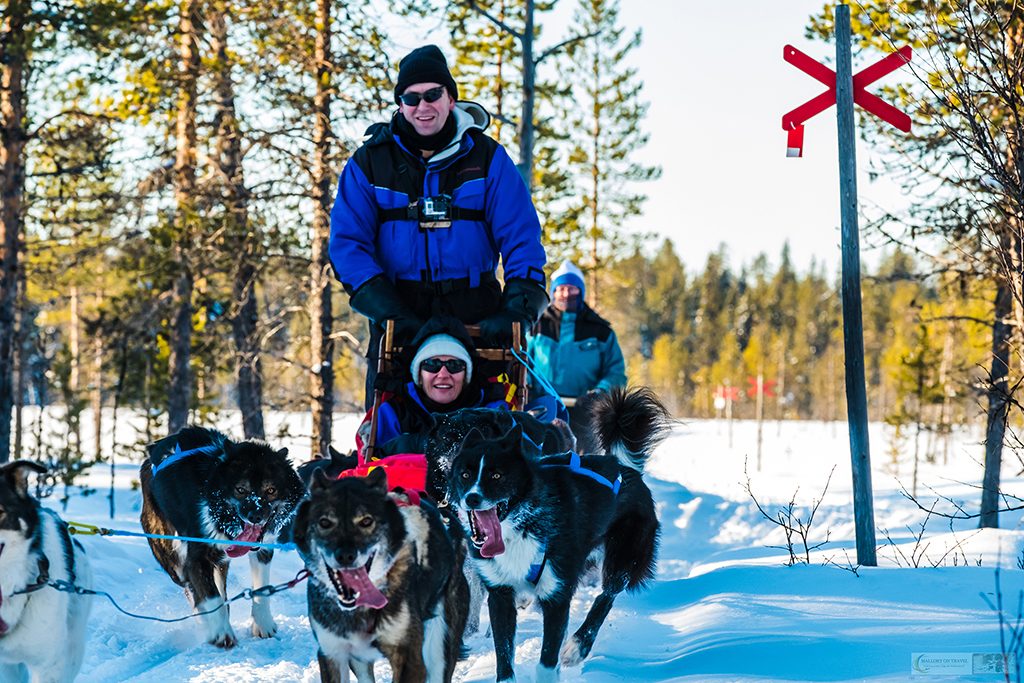 Snow dogs in Canada: Sleeping with Sled Dogs in The Yukon

Our dog sledding experience in the benign conditions of a beautiful winter day was probably relaxing, a bit of a stroll in the park, especially for the passengers. The drivers or mushers appeared to handle their dogs and sleds extremely well, coping with any challenges without Brenda having to become involved too often.

However, imaging some of the challenges that face the participants of such dog sledding endurance races such as the famous Iditarod, there’s a new-found respect for these hardy experts of the outdoors. Navigating, negotiating and surviving the hazards that a full on North American winter must through at you deserve the utmost respect.

The Iditarod dog sled race is described as the “Last Great Race” and is held annually with mushers and dogs racing from Anchorage, in Alaska, to Nome on the western Bering Sea coast.


Over 1000 miles, through some of the most challenging terrain on earth, over frozen tundra, rivers and through high mountain passes.

“You can’t compare it to any other competitive event in the world!” 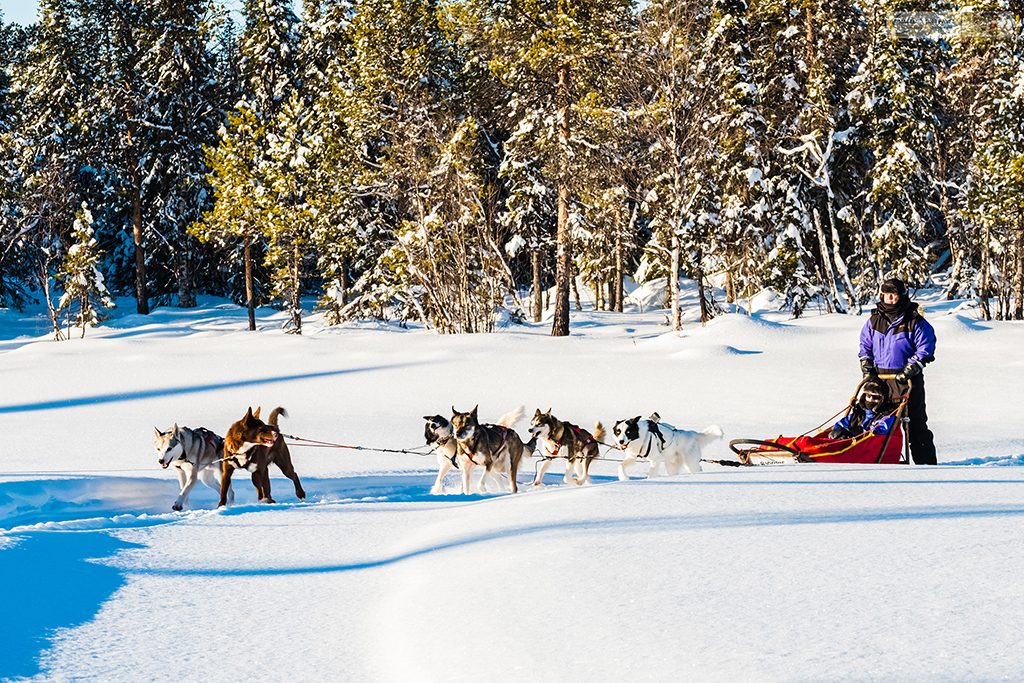 Dog sledding in the Swedish wilderness

In 1925, the town of Nome, Alaska suffered an outbreak of diphtheria, but had an insufficient supply of serum.


There were further supplies in the town of Nenana, over 700 miles away. A relay involving 20 dog sled teams was organised to transport the much needed serum.

It took six days for the final team, led by the now famous Balto to deliver the serum to Nome.

This is the origin of the Iditarod.

The dogs can create their own challenges, with a variety of characters. Brenda was especially concerned as one of the teams included a bitch in heat, which unsurprisingly can disturb the harmony of her team mates. Brenda listened carefully to the barking of the teams and could anticipate any sign of potential trouble, able to prevent it before it becomes an issue.

Our assured guide used the snowmobile to break trail, speeding off ahead of the dogs and then waiting for them to catch up. This allowed me to clamber out of the trailer and capture some shots of the teams as they arrived, choosing not to wear the over suit or boots for ease of movement.

Photography on the move is a bit of a challenge, keeping the fast-moving dogs in frame and focus while bouncing around in the back of my trailer. The bright light and whiter than white snow allowed for fast shutter speeds, which helped, but also meant the possibility of ‘blown’ highlights was increased. It’s not supposed to be easy though, right? 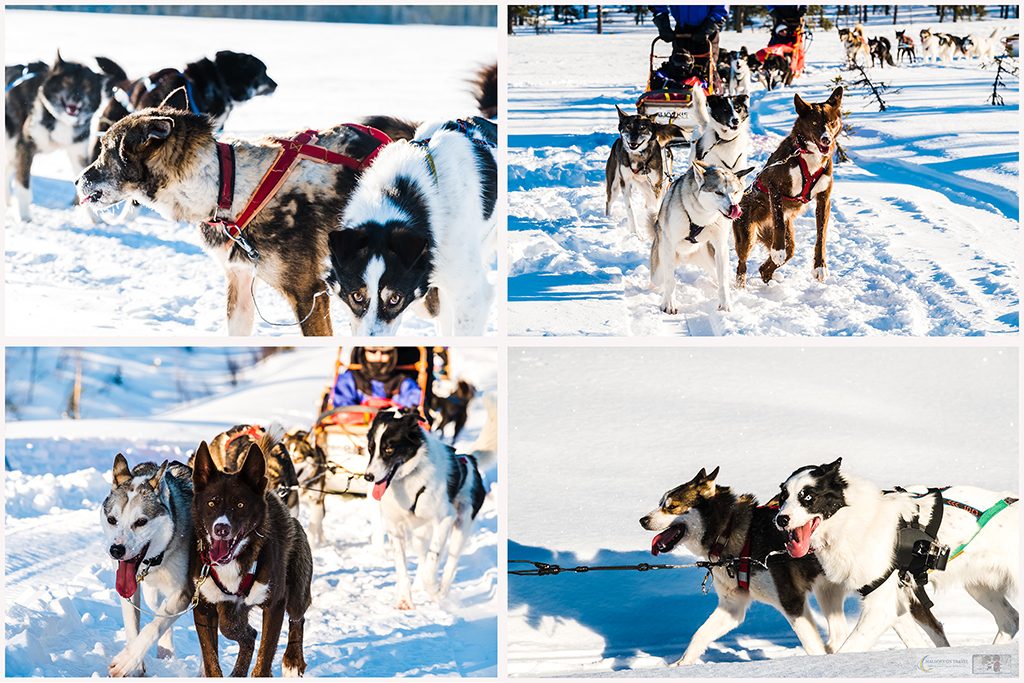 We were having such a great time, that it flew, before we knew it, the day was nearly done, there was just enough time to fit in a late lunch of a kind of fish bisque. Fortunately, the speciality of Swedish Lapland was still in plentiful supply and my companions still spoke to me as we huddled around a warm log fire. The day ending, almost as it had started.

Dog sledding in Swedish Lapland; it just has to be done! 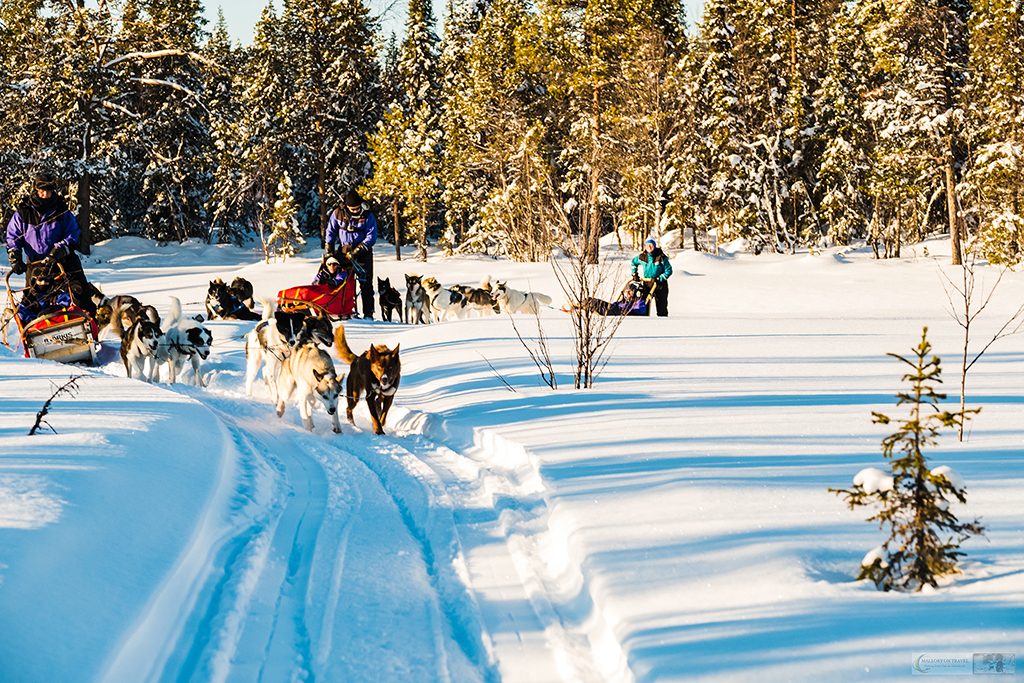 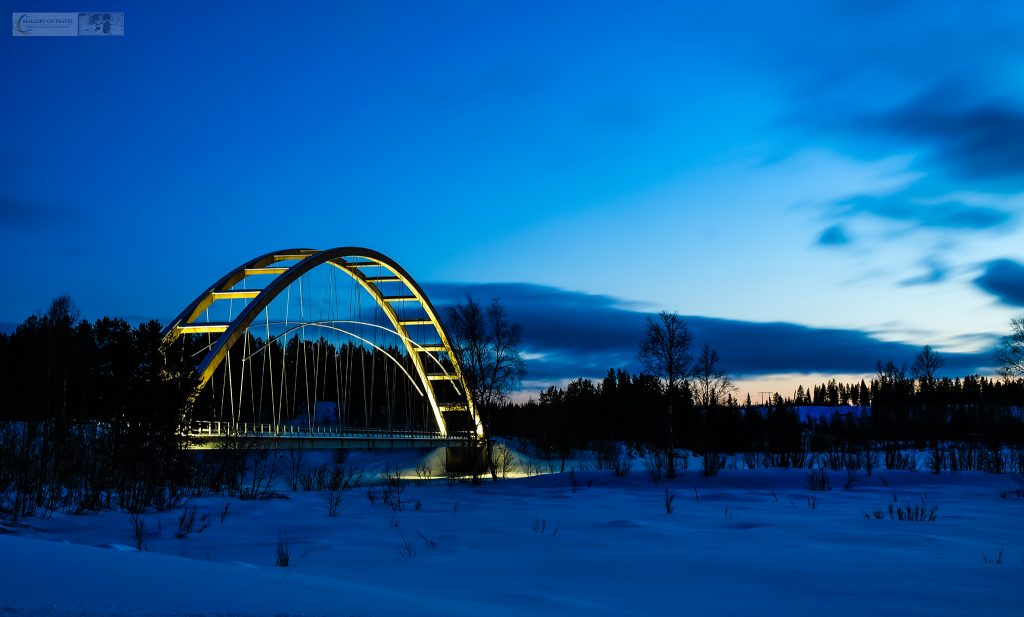