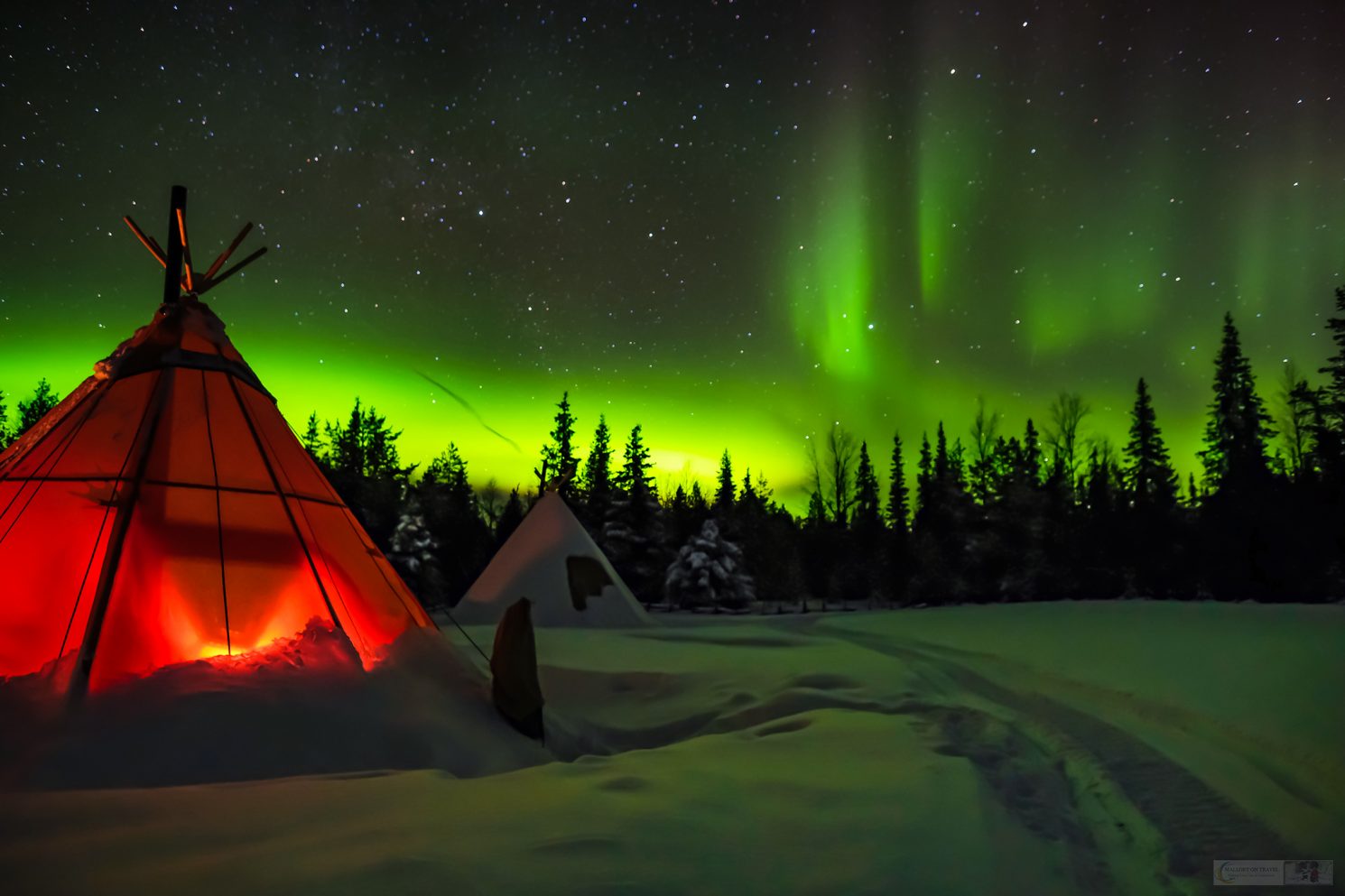 If you’ve ever been fortunate enough to see the spectacular Aurora borealis, known affectionately the “Northern Lights”, it’s difficult to imagine they’re caused merely by the collisions of charged particles from the sun as they enter the earth’s atmosphere. The explanations of our ancestors seem far more appropriate; a sky bridge built by the gods of the Norsemen, the Romans who considered “Aurora” the goddess of the dawn, or the Inuits believing they are the dancing spirits of the deceased. 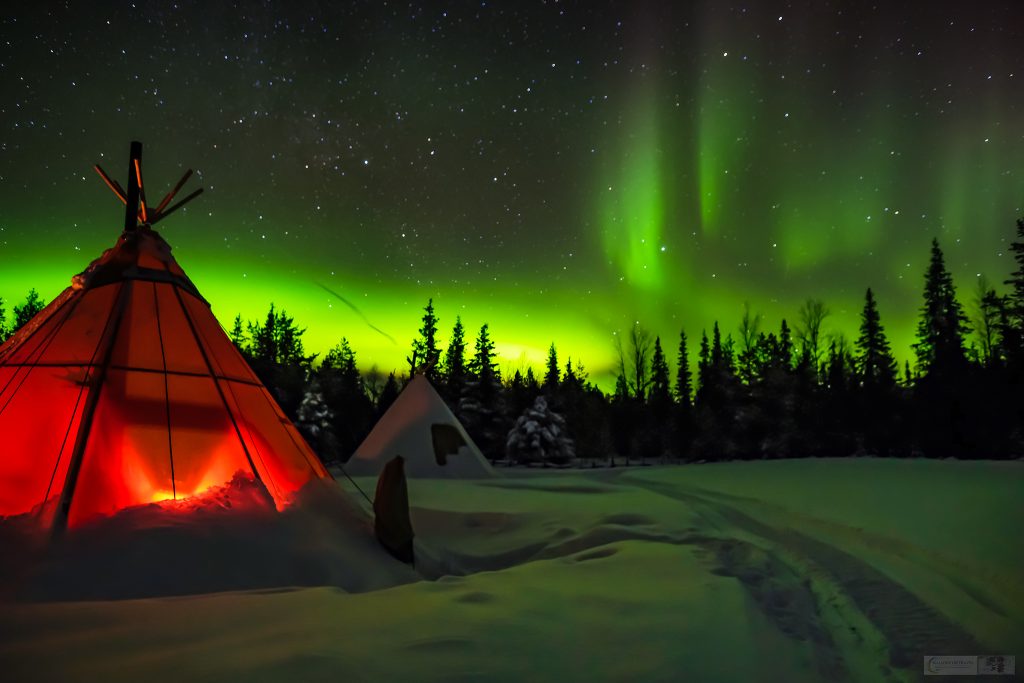 “Even the Chinese who, rarely witness the aurora, have a story, believing it to be a cosmic battle between good and evil dragons. It’s small wonder, just seeing them once is a lifetime ambition for many people”

When the sky becomes alive with dancing lights, it can be mesmerising and few things can be more exciting than witnessing a faint glow in the night sky develop into a swirling mass of green ethereal light. Add a few “curtains” or “pillars” of pink or yellow and they become truly breath-taking.

The Aurora borealis is most visible over the north pole, while its southern sister, the Aurora australis is equally strong over the Antarctic. It therefore stands to reason the best place to see the northern lights is far into the Arctic Circle. 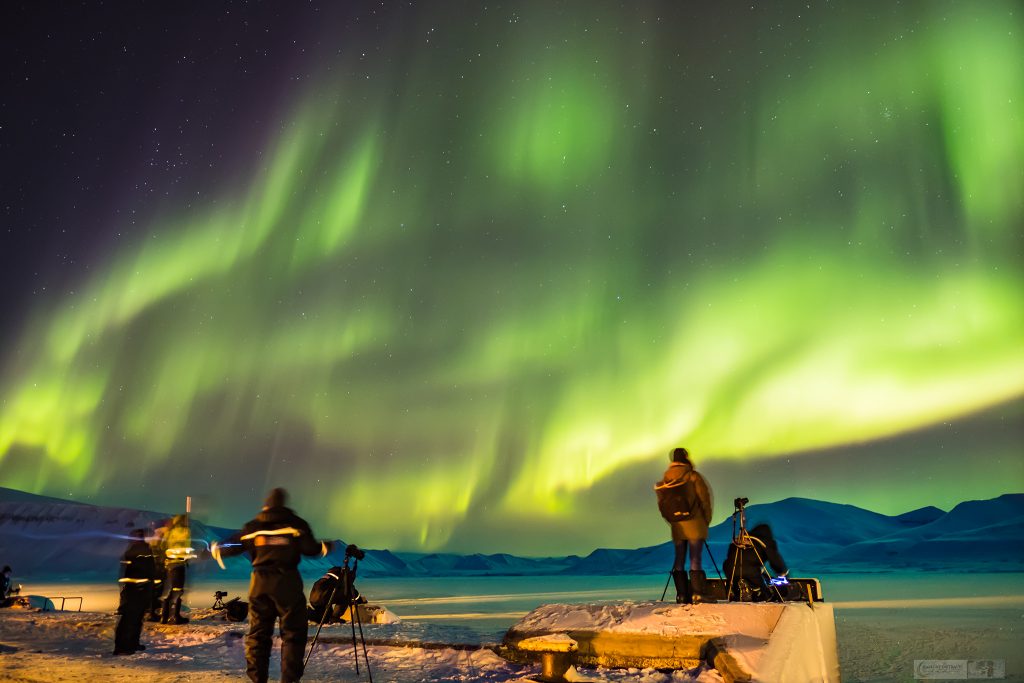 As if to prove this point, when spending two weeks at high northerly latitudes, within the circle I was treated to six displays, four of which can only be described as stunning.

The Aurora in Swedish Lapland

Each display of the dancing lights was as different as the story behind it. The first opportunity arrived on my very first night in Swedish Lapland, landing at Kiruna airport, and arriving at the IceHotel Sweden in Jukkasjärvi, I was quickly whisked off on a snowmobile to a nearby viewpoint. Even as guide Tummen and I raced across the frozen River Torne and negotiated the winding trail, through the trees to the hilltop the aurora was developing. 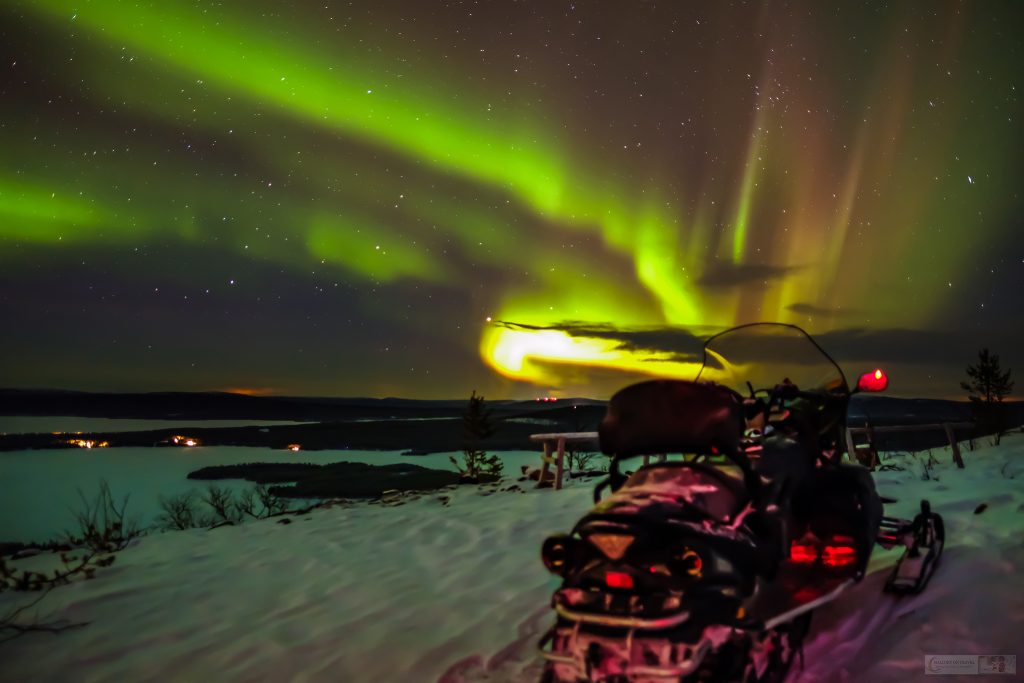 By the time we arrived at the top, the sky was a swirling mass of green iridescent light, like a huge illuminous cinnamon bun. Hues of pink and yellow joined the display, as the lights continued to spin and drift right across our field of view, even Tummen gasped. He claimed it was one of the best displays he’d witnessed, not bad for my first night inside the Arctic Circle!

Several days later, at the Sapminature campsite near Gallivare, a clear sky after dinner promised the chance of another display. Retiring to my tipi after dinner, the night was already showing potential, a ceiling of stars included the Milky Way and the faintest glow of green was already visible above the treeline. Setting up the camera on a tripod, I headed out to find it had already developed into a full-blown aurora.

It wasn’t as spectacular as the evening at Jukkasjärvi, the lights moved more slowly, almost static, but the tipis made the scene appear especially beautiful and interesting. 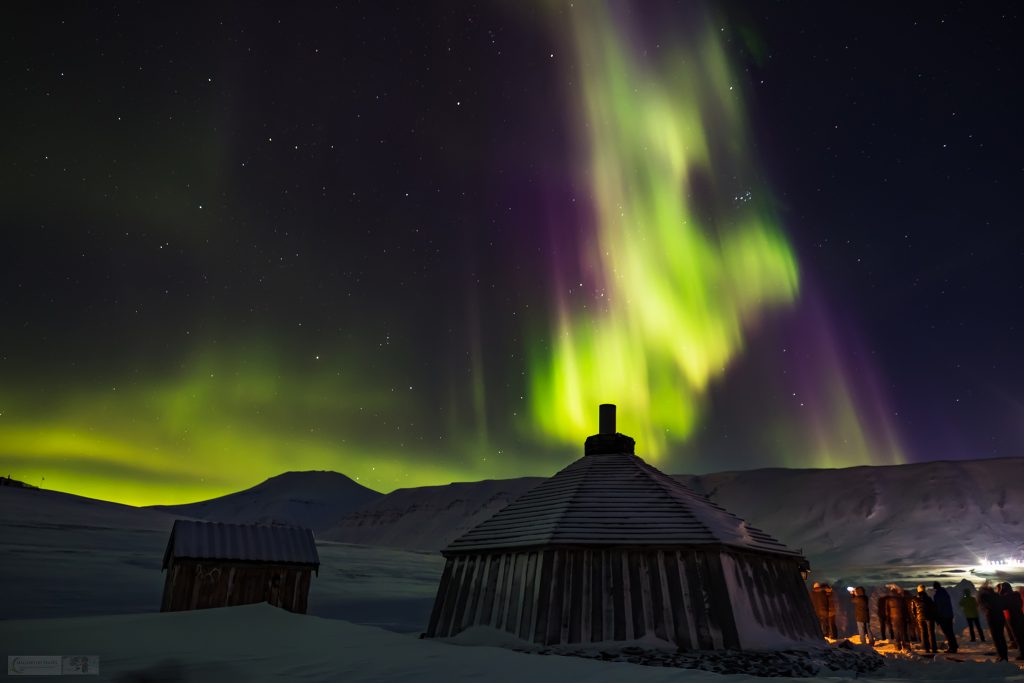 Swedish Lapland had treated me well, proving to be a great destination for witnessing the northern lights. Soon however, it was time to head even further north, to Svalbard with expeditionary and adventure cruising company Hurtigruten. 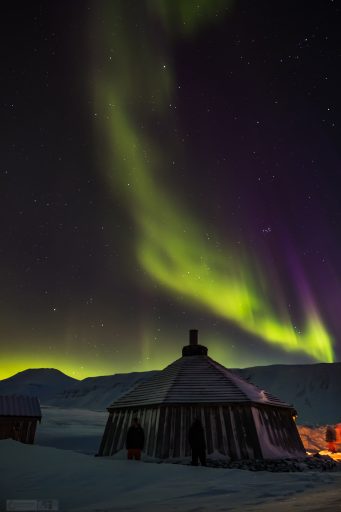 Camp Barentz and the lights

The Northern Lights in Svalbard

This time, I was travelling with an international group of travel writers and photographers as guests of Hurtigruten. The aim was to experience as much of the archipelago as possible during our short stay, and this included a two-day excursion by snowmobile to visit Svea. A full day of following each other’s trails across frozen fjords and short stopover at the ghost town, Colesburka and we arrived at the coal mining settlement.

More from Svalbard: Adventure in Svalbard; At home inside the Arctic Circle

After a surprisingly good meal, we ventured out by vehicle, accompanied by armed guards as protection against polar bears to the nearby fjord, away from the light pollution of the remote community. There was plenty of excitement and urgency, as even before we left Svea, the lights were enticing us with an impressive display right above our heads.

Almost before the van came to a stop, we eagerly spilled out clutching cameras and tripods to capture individual interpretations of the dancing sky. A short, but breath-taking display followed, but we were initially to feel disappointed, as it soon came to an end. 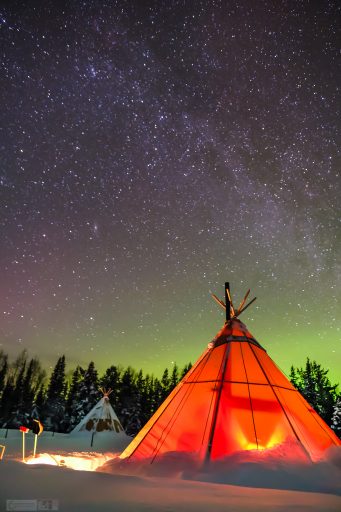 A starry night in Swedish Lapland

We remained optimistic and determined however, braving the frigid cold in the hope of a further show, fortunately our perseverance was to be rewarded. Soon, the sky was alive with another mesmerising performance, our animated little group searching for the best vantage points and whooping and hollering with excitement as the lights shimmered and danced over our heads. Constantly changing, each time seemingly more spectacular than the last.

The following evening, we were to feel even more fortunate!

We were seated around the large, open fire in a lodge at Camp Barentz, being entertained with tales of exploration about Willem Barentz and his companions who discovered Spitzbergen. Our host was not to finish her entertaining stories, as we were soon alerted to another aurora, immediately dropping everything and rushing outside armed with our photography gear.

“Witnessing one of these amazing displays of dancing lights is enough to make anyone believe in God. Surely the presence of a celestial being is responsible, not colliding particles!”

As if providing a finale, this was to prove the best display of all; a full performance of dancing lights, shimmering curtains and proud pillars in a variety of hues and shades, like a rainbow in the night sky. With the cabins and hills providing lovely subjects to complete the scene. The whole sky was alight, regardless of which direction we looked, the night sky was alive.

Every time I am fortunate enough to witness the northern lights feels like a privilege, but seeing four separate, spectacular displays within a fourteen day period appears good fortune beyond belief; maybe the gods of the Norsemen or the Romans are somehow involved after all. 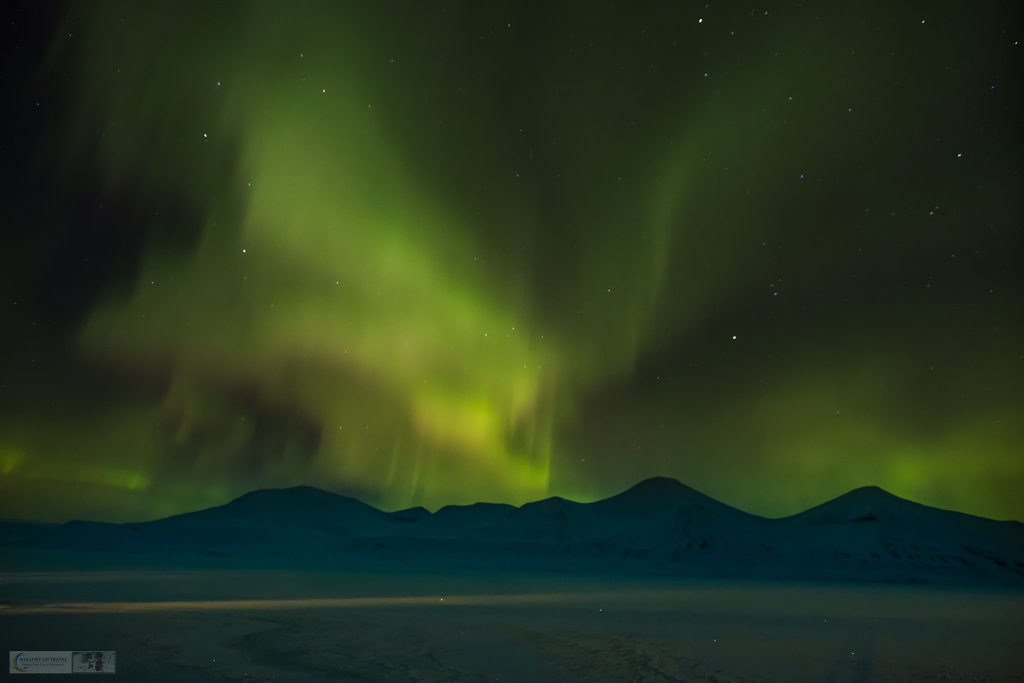 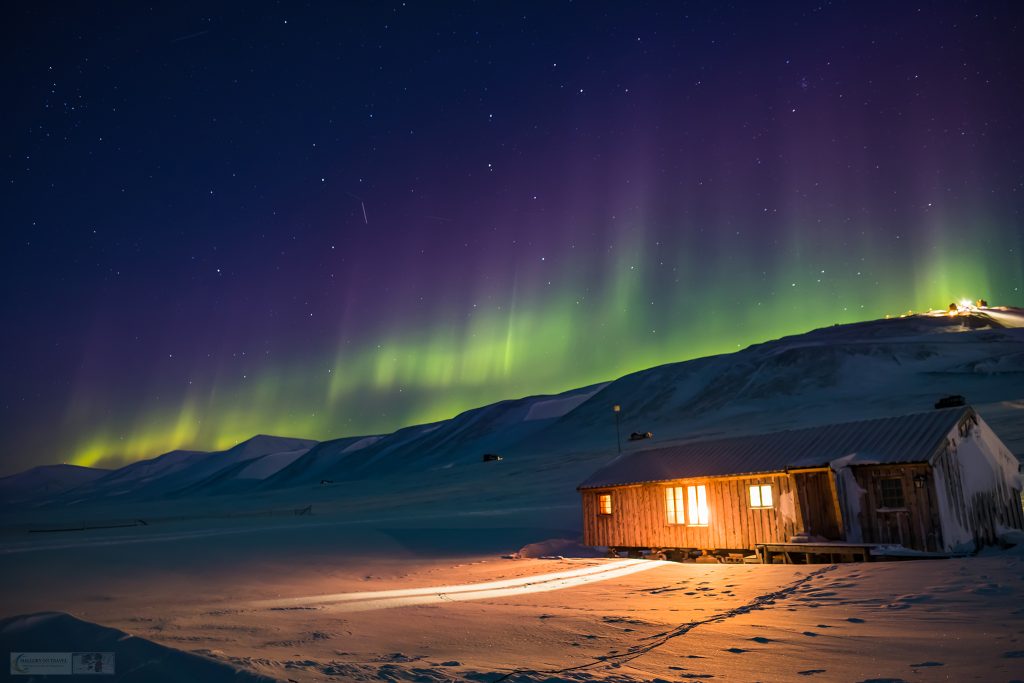 A curtain of light