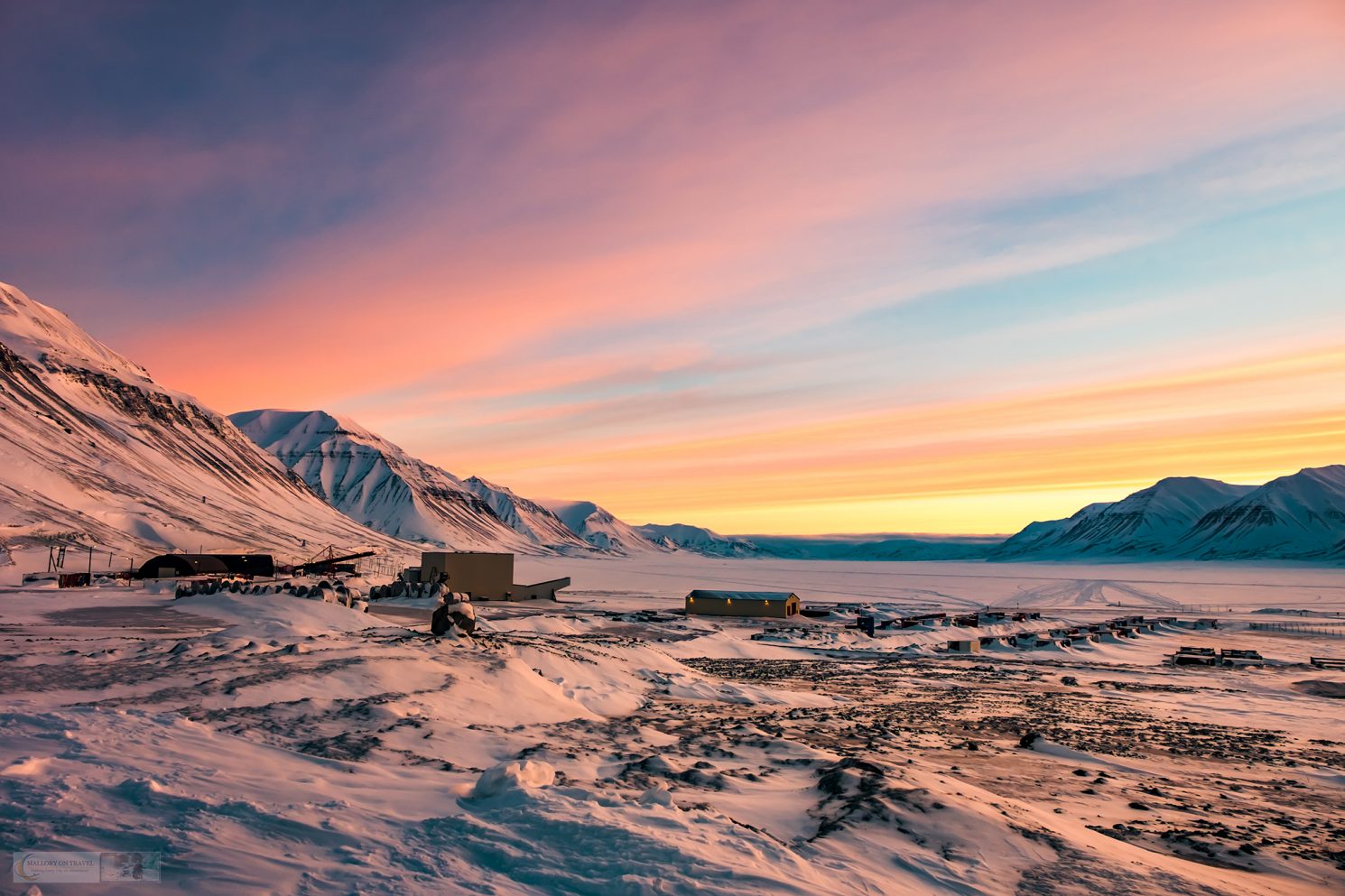 Svalbard is one of those destinations which appeals in a certain kind of way, an evocative place that is synonymous with adventure. The archipelago at 81° North, lies, deep within the Arctic Circle, it is sculpted by the elements, sea, wind and ice. Conjuring up images of polar bears searching for seals on sea ice, the dancing skies of the northern lights, the midnight sun, and mile upon mile of endless snow, a pristine wilderness attracting those with a pioneering, adventurous spirit.

Svalbard, a blend of industrial and pristine landscape

It’s a destination I’ve always been eager to visit and almost upon arrival in Longyearbyen, the main settlement of Spitzbergen it began to weave its spell. The transport had barely left the airport carpark before I was jumping out to grab some photographs. The frozen sea, patterned like huge ice water lilies, constant thawing, freezing and wave action forming geometric shapes along the shore.

The impressive machinery of the coal loader on Hotellneset, which was used to load coal from Mine No.7 stood brooding above the frozen sea, standing high over a wispy sea mist. Even before we checked into the luxurious, but understated Spitzbergen Hotel, I was hooked. 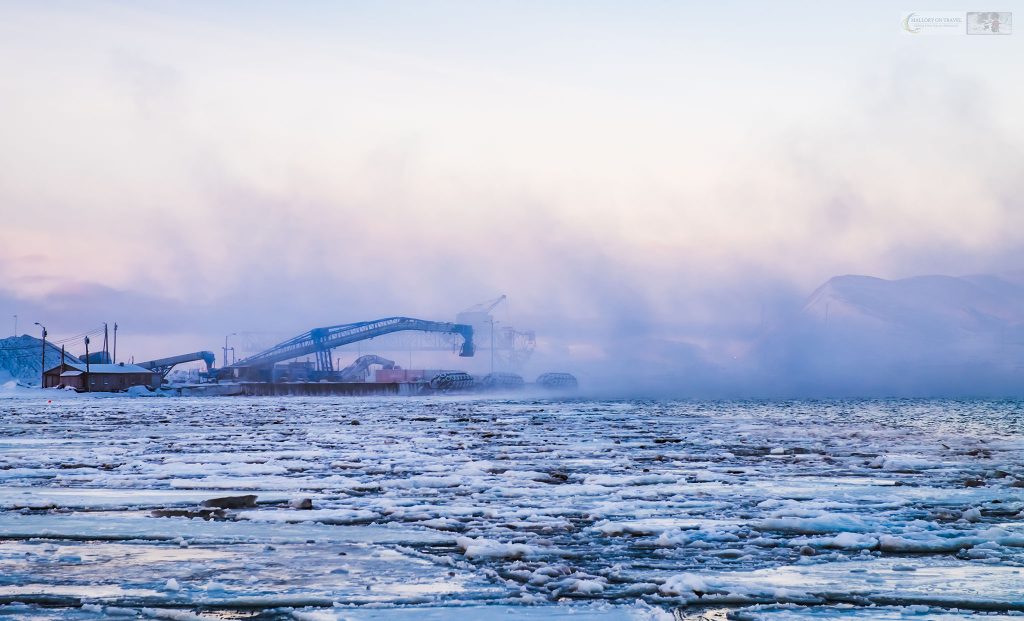 Massive machinery in the mist

The hotel located towards the top end of town provides outstanding views of Adventfjorden and Hiortfjellet Mountain. It has been decorated sympathetically, preserving the original character and seems to fit the pioneering spirit of Svalbard. Besides, each room even has a coffee machine! It’s also part of the history of Longyearbyen, as this is where the owners and high ranking officials of the Store Norske Spitzbergen coal mining company used to reside when in the archipelago. They enjoyed fine wines and champagnes while hosting influential guests, and it is still possible to have a champagne tasting session at the det gamle Nordpolet.

Outside of the settlements the only forms of transportation are snowmobile and dog sledding and these were how we got around, merely adding to the adventure. 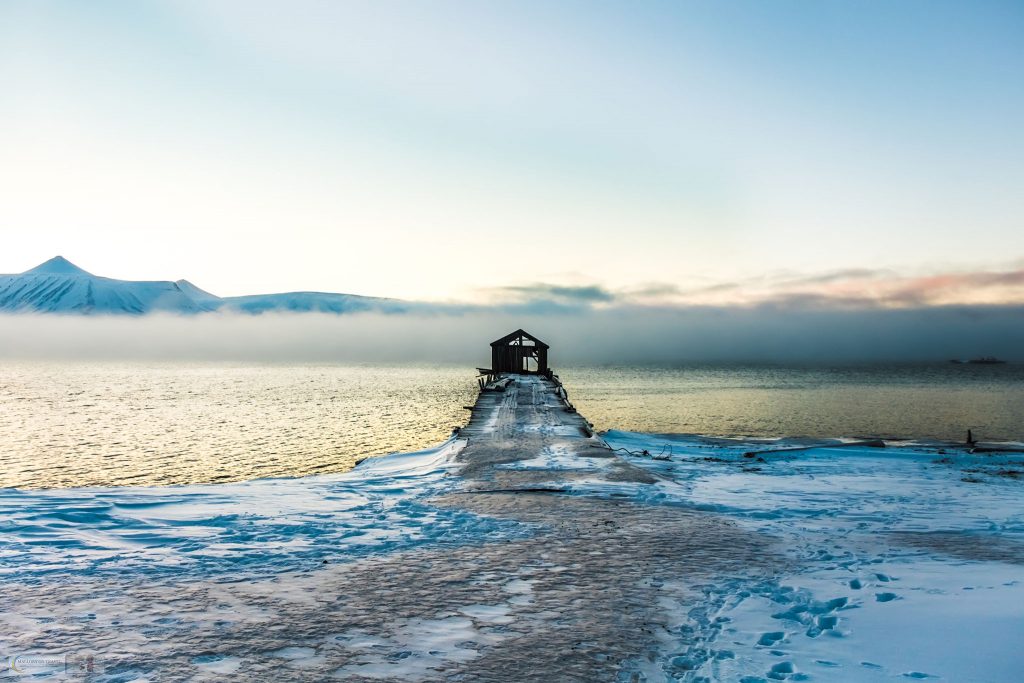 We dropped in on the ghost town of Colesburka on the way to the mining community of Sveagruva, by snowmobile, which was fun, rattling across sea ice and negotiating winding valleys or steep hills. The strange deserted collection of buildings seems to represent this remote archipelago, it was a place I wasn’t eager to leave, even though it meant several more hours snowmobiling to reach Sveagruva. 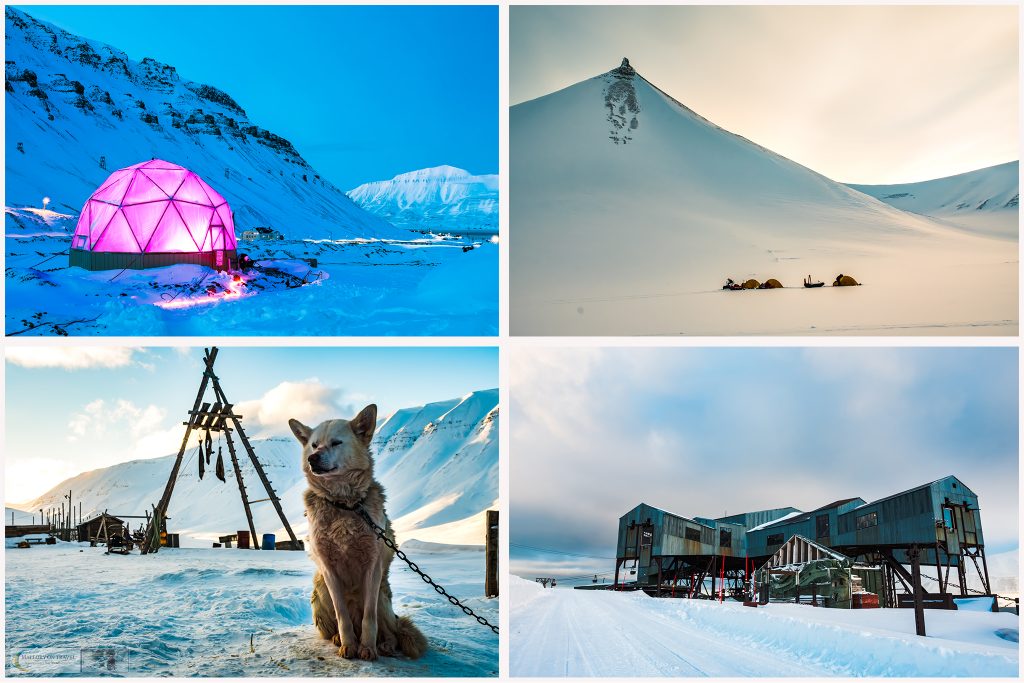 Around Longyearbyen, clockwise from top left; The ‘growing’ dome, Wild camping Svalbard style, The ‘ropeways’ hub and a sled dog

Also, known as Svea, the settlement is several hours from Longyearbyen, an isolated town which, as coal is currently not being mined, is attempting to reinvent itself. Mine tours are a relatively new yet, fascinating initiative, with actual miners leading the tours, somewhat reluctant in sharing their experiences, but with a little coaxing they did open up, telling us a few personal stories. It is a dirty, unpleasant world, difficult to imagine people working 10 or 12 hours shifts down there. As the mine could reopen, the machinery is still in place, incredibly impressive, giant rock munching drills, which churned out the rich veins of coal from right from the earth. It wasn’t my fondest memory of Svalbard. 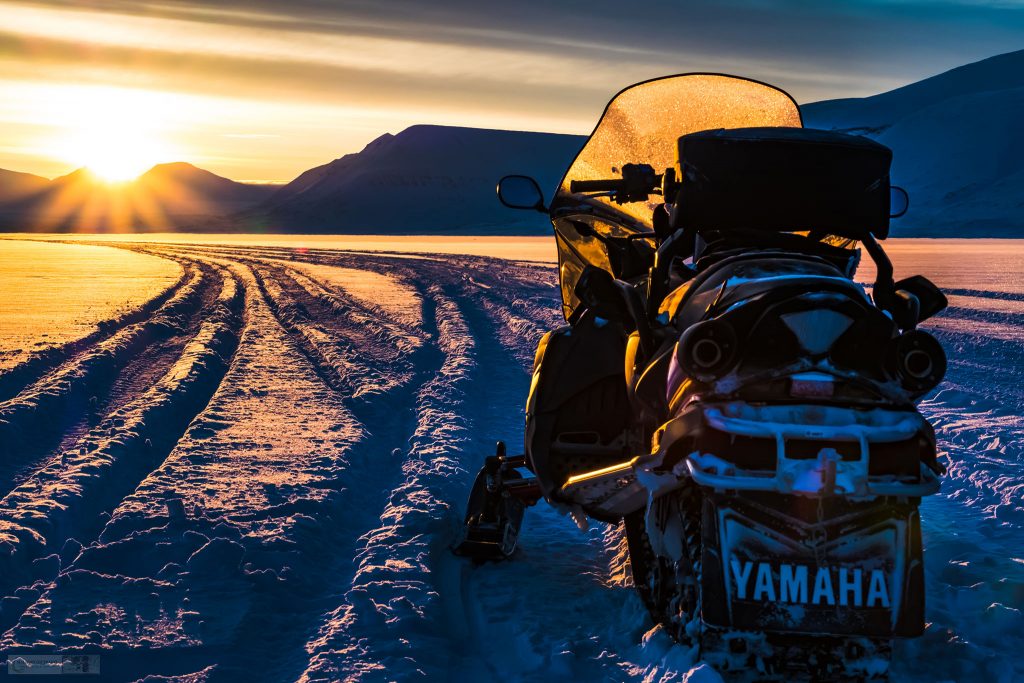 Back out on the snowmobiles, in the middle of this icy wilderness was much more exciting, honestly one of the most beautiful environments I’ve ever visited. However, even within the miles of pristine, snowy landscape, humankind has left its footprint, trapper huts, ropework pylons stretching far into the distance, crossing snowfields or following valleys, industrial buildings or machinery and ghost towns.

Yet, far from spoiling the landscape, it often seems to blend, the very contrast of the old mine workings or deserted buildings seems to accentuate the stark beauty of Svalbard.

Late February deep inside the Arctic Circle, the sun remains low in the sky throughout the day, never climbing above the jagged peaks of the surrounding mountains. This bathes the landscape in a lovely golden light, as if the sun is about to rise all day. This diffuses the harsh, cold blue which, this latitude is cloaked in most of the time. 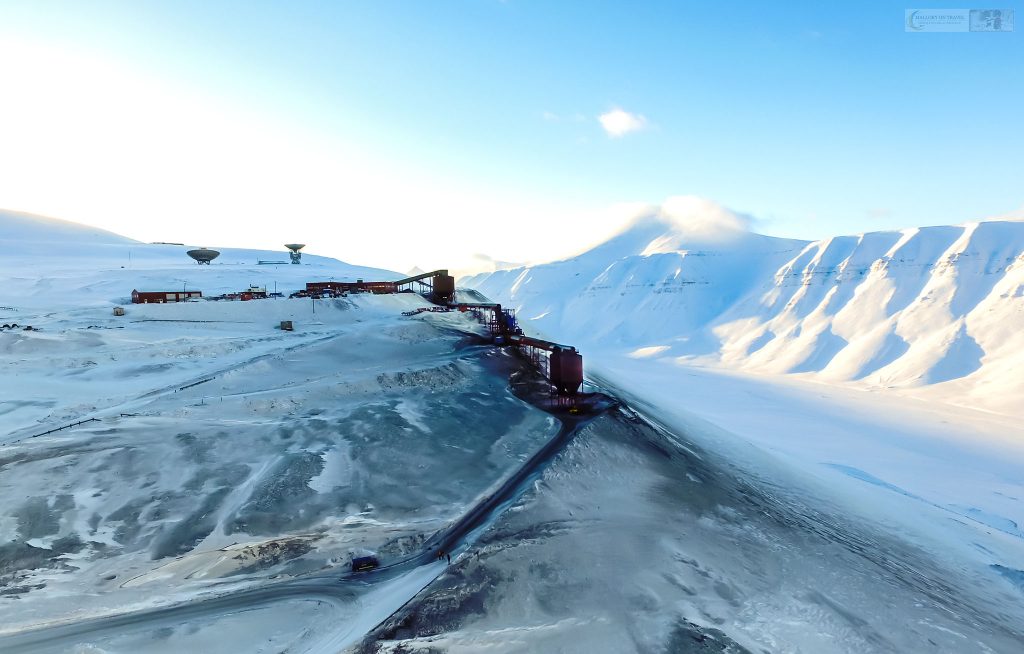 An aerial view of contrasting landscapes

Like many such places, despite the grandeur of the surroundings, a rugged mountainous terrain, smoothed out by masses of pure white snow under huge, expansive skies it is the people that leave a lasting impression.

It doesn’t come as any great surprise that they possess an adventurous spirit, living out here, quite isolated with short winter days and long summer ones, being independent is probably a given. Everybody seems friendly, but more telling is their determination, creativity and ingenuity. It takes qualities like these to decide to brew beer this far inside the Arctic Circle, or to become the most northern chocolatier in the world! 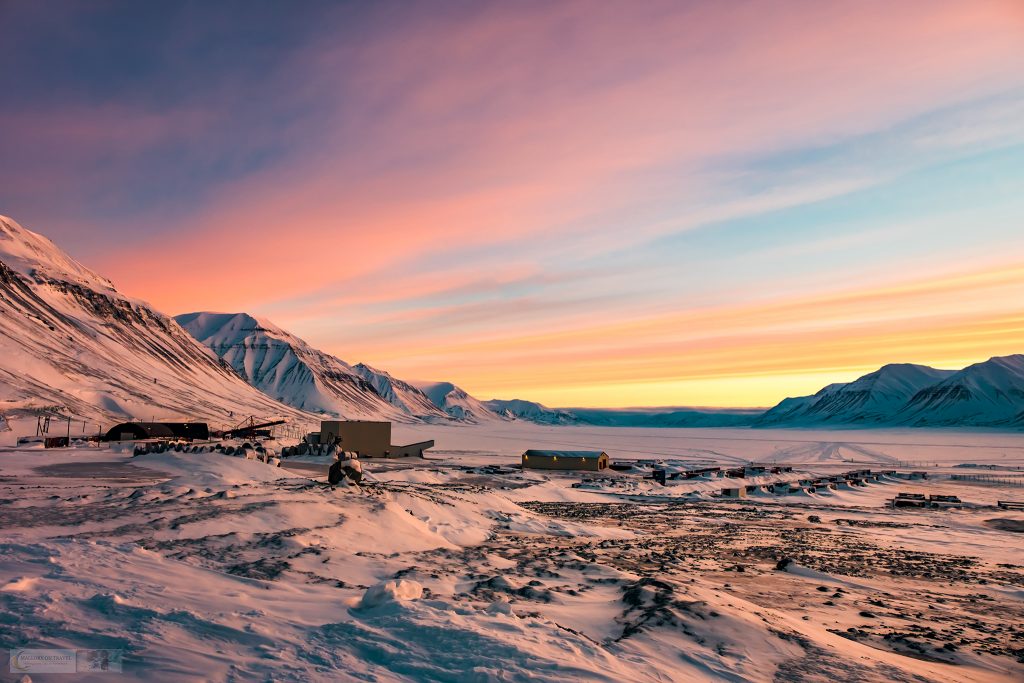 Just the fact that it’s possible to buy a flat white here is mind-blowing, hell, there are places back home that haven’t even heard of it!

The scientists looking after the “Seed Vault” are another example. Looking after samples of important and essential seeds from depositories from all around the planet. As one informed us:

“This is the most important room in the world!“ 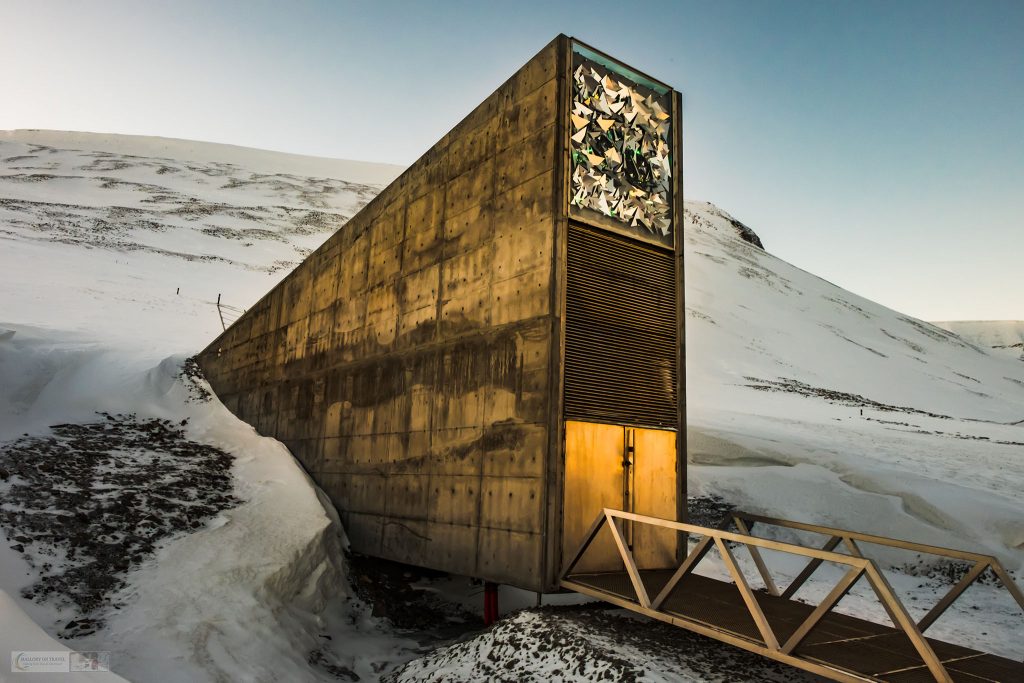 It may seem to be overstating the case; but they recently sent essential seeds to Aleppo, Syria because the seed bank there had been destroyed. This enabled them to replenish their crops, before returning seeds for storage again several months later. A fantastic story which emphasises the importance of the seed vault. 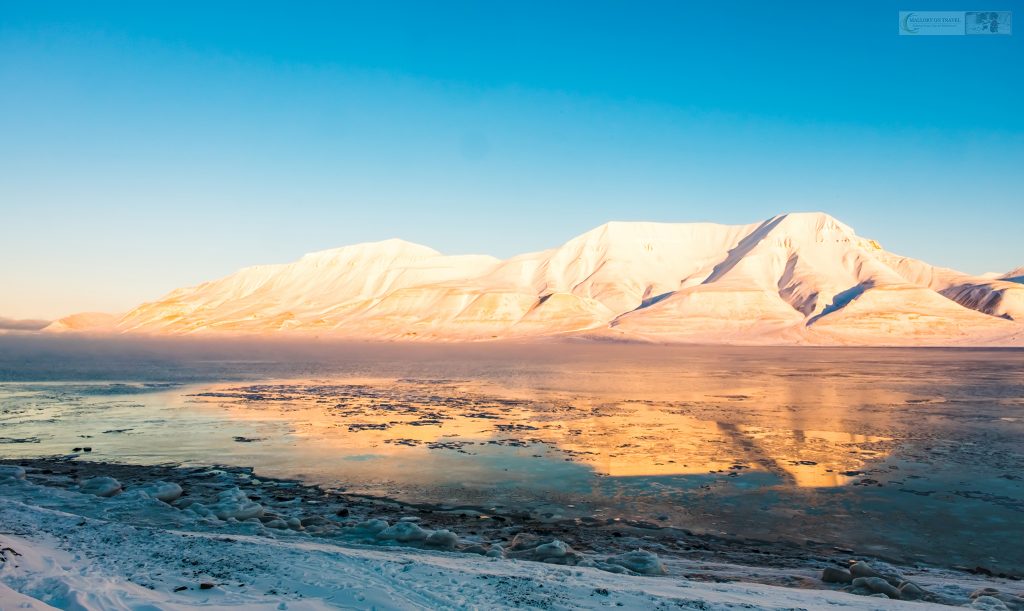 The residents of Svalbard tend to accept challenges, not taking no for an answer. We even met a guy using a specific worm to break down cardboard waste into a compost which enabled him to grow vegetables inside a special tented dome. He’s become a bit of a celebrity, I (along with many others apparently) likened him to Matt Damon in “The Martian” and his dome has become a landmark of the town.

Obviously, we hoped to see polar bears, but were not that lucky, however, just searching for them on the frozen fjords where we did find sunbathing seals was almost as exciting.

Besides, while taking the most northerly fjord cruise in the world to the Russian ghost town of Pyramiden, I did see several walruses! As this was a first, it was even more satisfying. 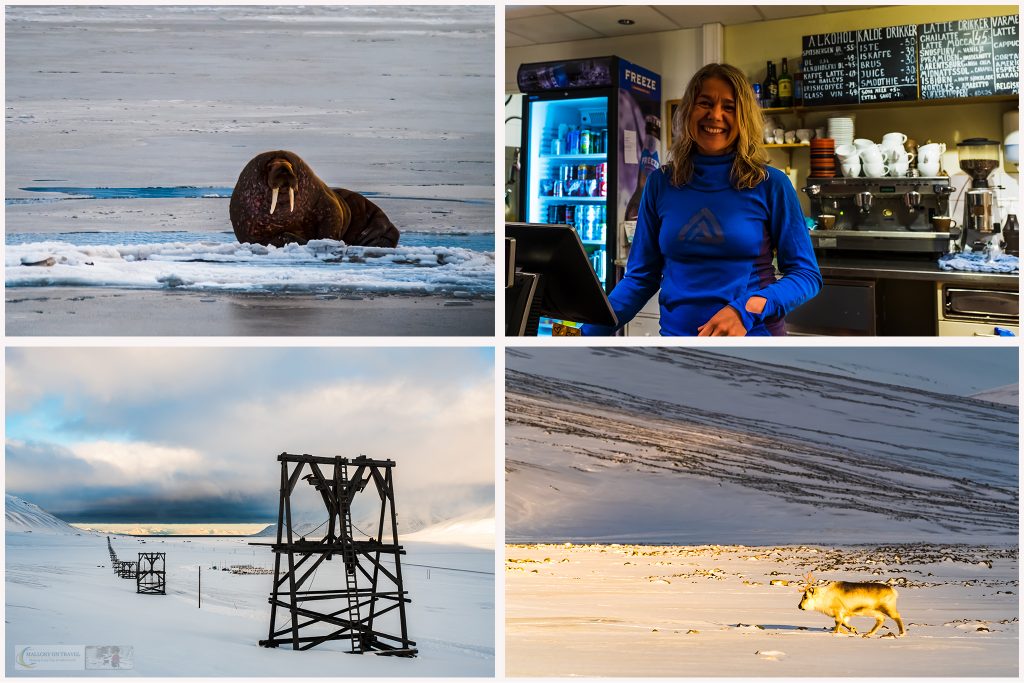 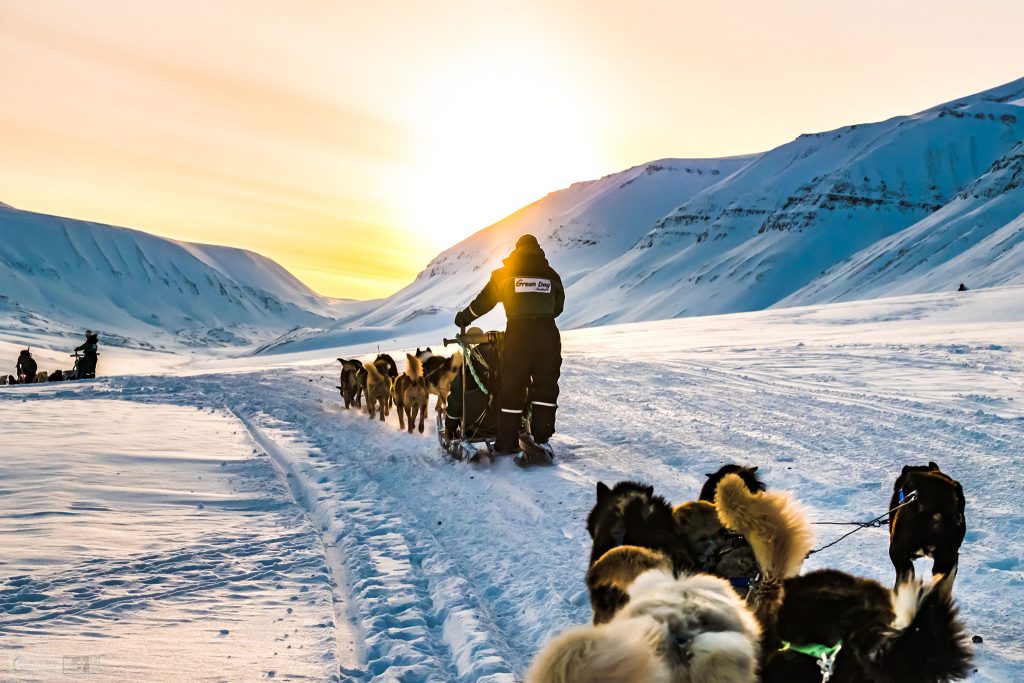 Sledding into the sun

How to photograph the aurora: Photography Tips; Photographing Northern Lights

The dancing lights of the northern skies, the aurora borealis did perform for us twice, two spectacular displays which even alone, made the journey to the Svalbard archipelago worthwhile. Watching them develop from single, thin strands of green light to huge colourful pillars and curtains of multi-coloured light was breath-taking.

Travelling by dog sled is slower than snowmobile, and to be honest, not as much fun, but as a lover of sled dogs, spending a day with these beautiful, exuberant animals is great excursion, and one every visitor to Svalbard should try. 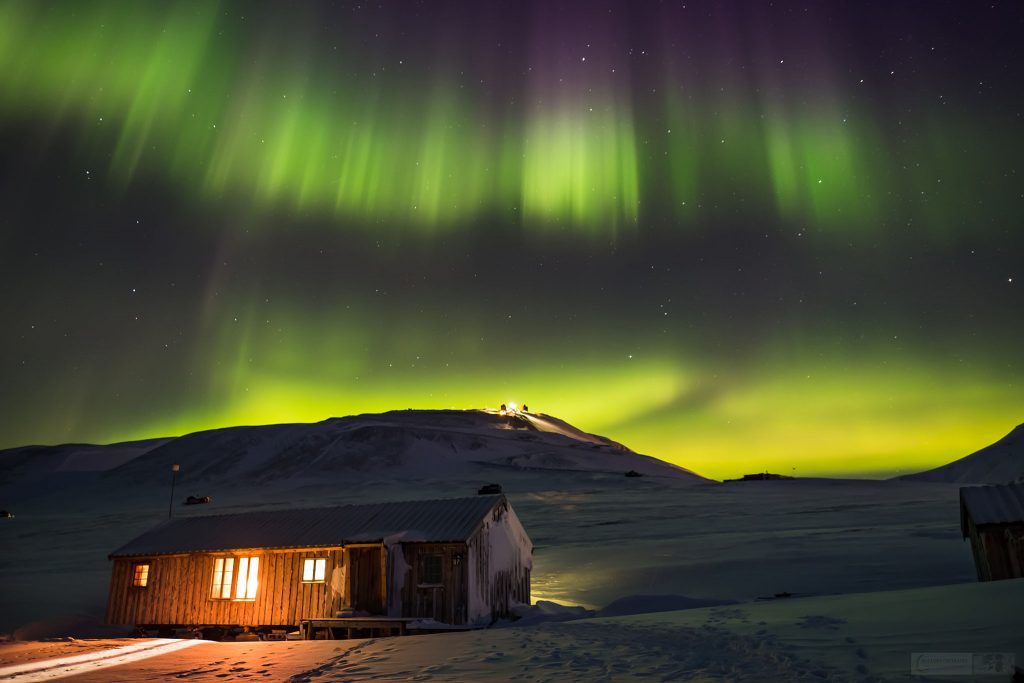 A day dogsledding: Postcards from Sled Dogs in Swedish Lapland

Leaving any destination is rarely a pleasant memory, but departing the Arctic Circle and saying goodbye to Svalbard was one of the biggest wrenches I’ve ever experienced. Now, back in my favourite chair, I’m beginning to feel slightly home sick!