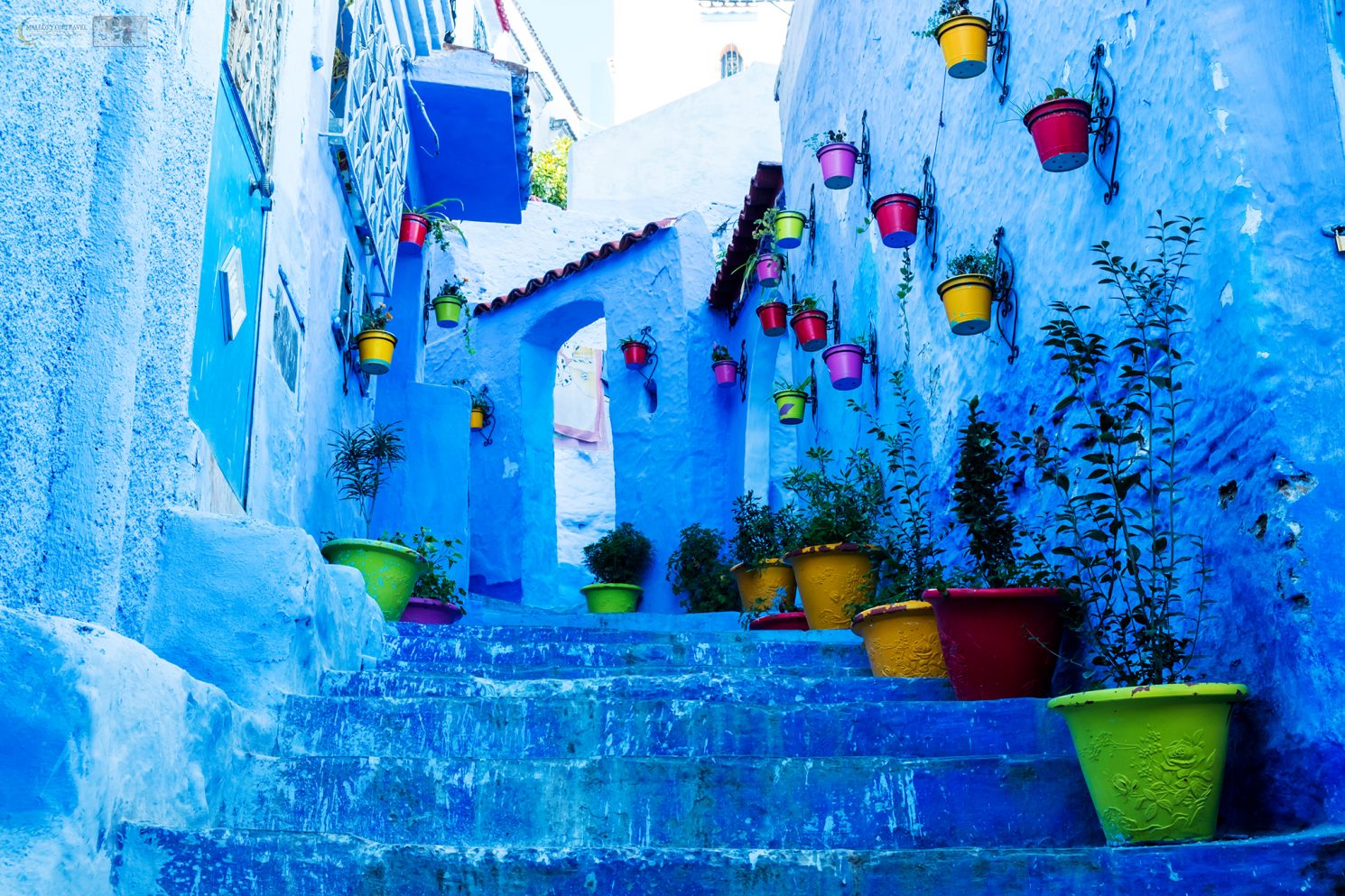 The taxi driver dropped me and my luggage at a low blue coloured archway, and gestured dismissively, “it’s up there”, this was as far as my fare took me, welcome to Chefchaouen.

Dragging a heavy bag over the rough cobbles of the narrow alley, smiling slightly ridiculously at the storekeepers and children who crossed my path as the hill steepened, I soldiered on. Reaching the Dar Meziana riad, which would be home for the next few days, within a few minutes. A greeting of mint tea and a warm smile made the minor challenges of the journey dissolve away to distant memory within a few moments. 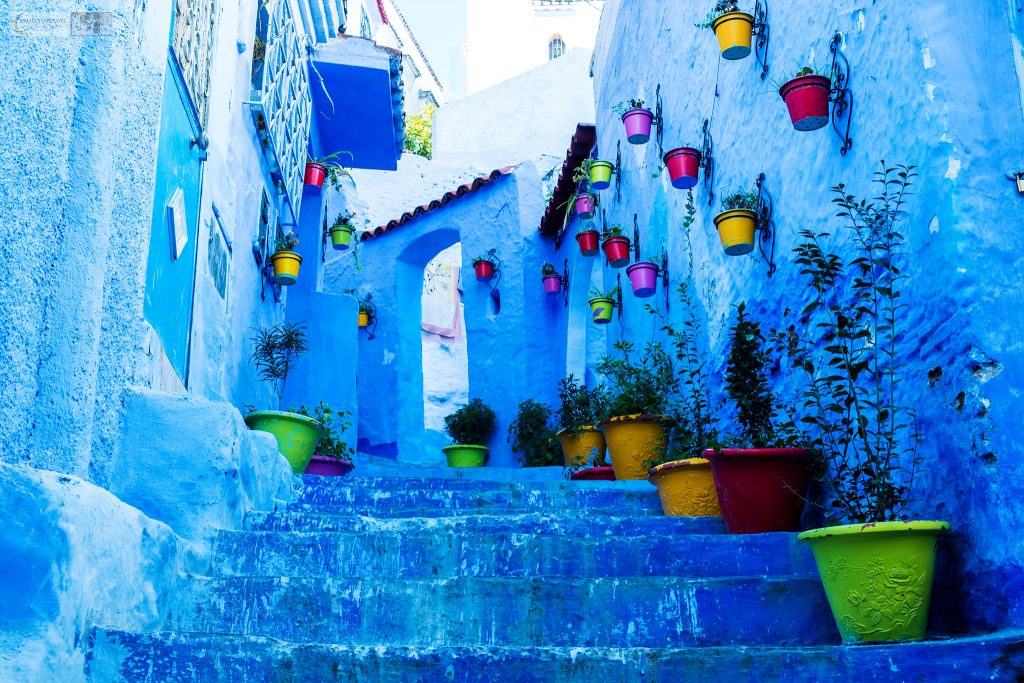 Probably the most photographed street in the Blue City

Chefchaouen, the “Blue City” is tucked away in the Rif mountains of northern Morocco is away from the usual tourist routes of the country, yet despite the challenges, many still make the journey. I had been planning to visit for some time and once the bags had been ditched in a small, but comfortable room I was soon out exploring the ramshackle streets of the blue and white medina.

I had travelled from Marrakech by train and bus, the small challenges along the way, reminded me how satisfying independent travel can be. It had been some time since I had needed to book my own transportation and cope with the little issues which make travelling so worthwhile. 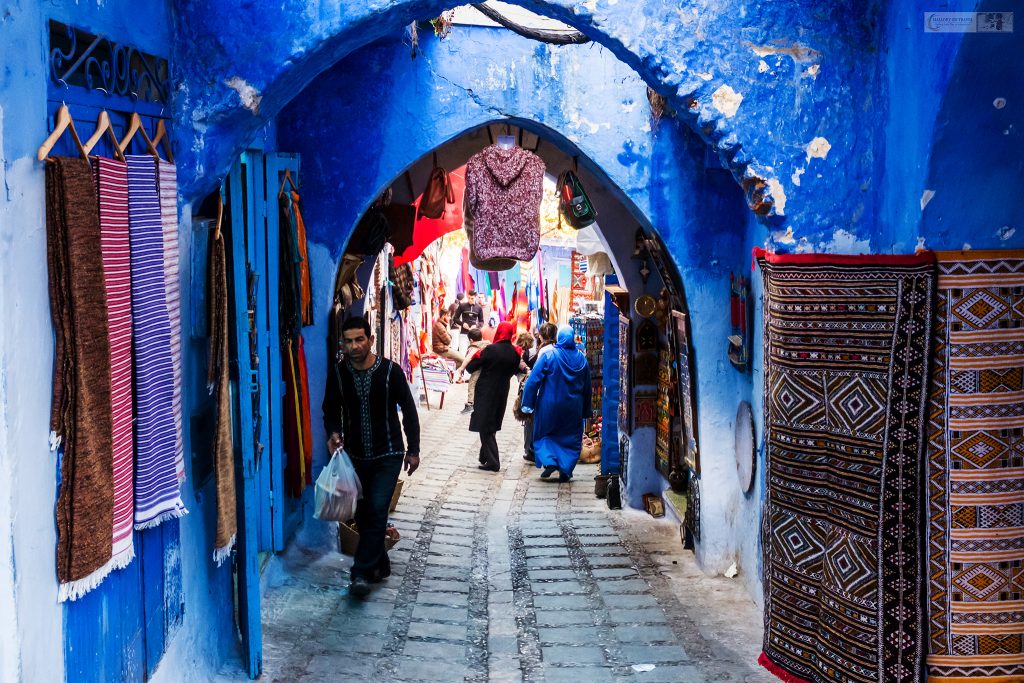 Read about another Moroccan train journey: Images from a moving Train – Photo essay

The uncooperative rail attendants at Casablanca, that seemed genuinely reluctant to provide any help to me or several other confused looking people bearing backpacks and speaking in a variety of foreign accents.

It was almost by luck that any of us managed to get on the right trains, mine heading to the small station at El Ksar el kabir. Standing on the platform without another soul around, in what appeared to be a town from a Hollywood western the imagination soon goes into overdrive.

“What if the train doesn’t arrive?”

“Is there likely to be any accommodation if I need to stay the night?”

“Hell are there even any people living here?”

“How cold does it get at night?”

All questions that even the most optimistic traveller can be excused for considering at times.

A helpful French guy had ensured I caught the right CTM bus in Tetouan, allowing me to sit back and enjoy the journey along the winding road to my eventual destination; Chefchaouen. 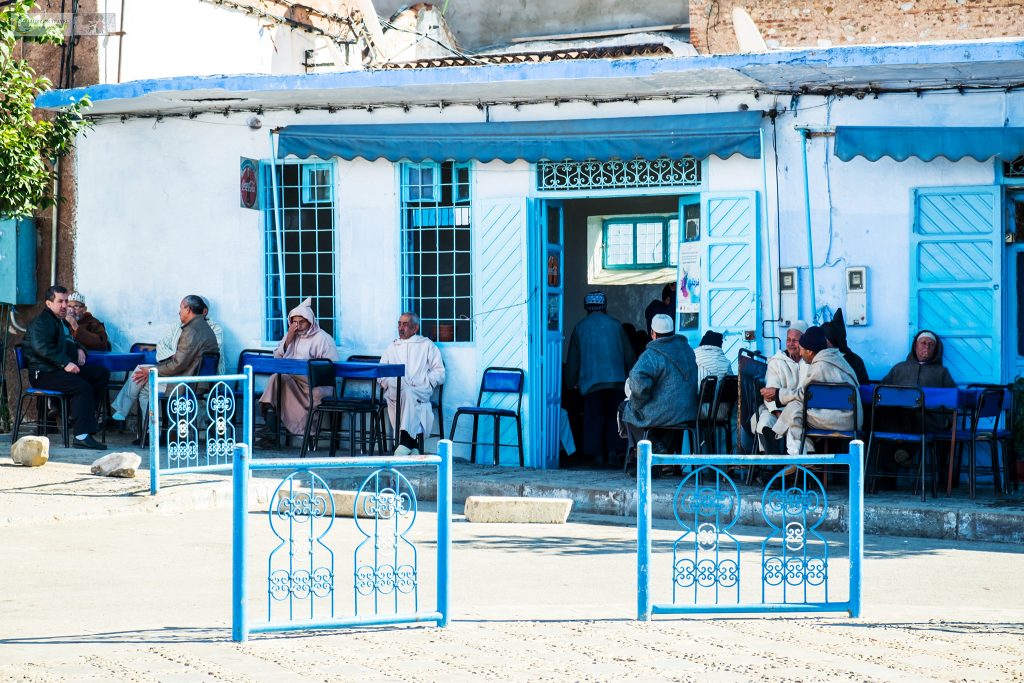 As it was already early evening I was provided a good recommendation for dinner, restaurant Aladdin, where I planned the following days exploring over some tasty, authentic Moroccan cuisine.

At breakfast, I created quite a stir, declining the coffee offered in preference to some kopi luwak which I’d been presented with on a recent trip to Indonesia. The young girl at reception was incredulous when I explained how it was produced, giggling uncontrollably and steadfastly refusing to try some. She was wise, it’s nothing special and now aware how cruelly the civets are treated, I won’t be trying it again. 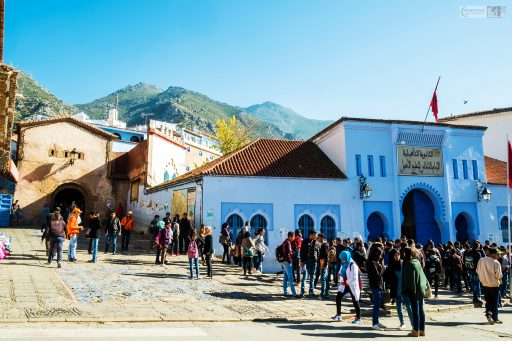 I was soon in the maze of streets, getting slightly disorientated and caring less, curiously stopping at every side street and open door to see what lay beyond. Rough, narrow streets descending towards the town square, each one lined with small homes, whitewashed or blue, giving the city its famous nickname.

“I half expected Harry Potter to suddenly appear from one of the stores, wand in hand, it was like a whitewashed Diagon Alley”

Passing several merchants dressed in djellabas sitting beside old wooden doors, their colourful wares decorating the walls of the medina. A variety of vibrant fabrics, splash colour over the pastel hues, rows of leather bags or sandals hang and where women, young and old, draped in delicate scarves browse for a bargain.

Strolling through numerous low arches, stained deep blue, following the fragrances of the aromatic spice or incense stalls which drift slowly along the passageways from one square to the next. Soaking in the medina, the beating heart of Chefchaouen.

It is a tactile town, it’s necessary to touch and feel the textures of the rough walls, which could almost be ceramic. There is a compulsion to run hands along the fabrics and allow the spices to drain through open fingers. The painted wooden doors, colour peeling through time and exposure to the elements giving them substance and character. 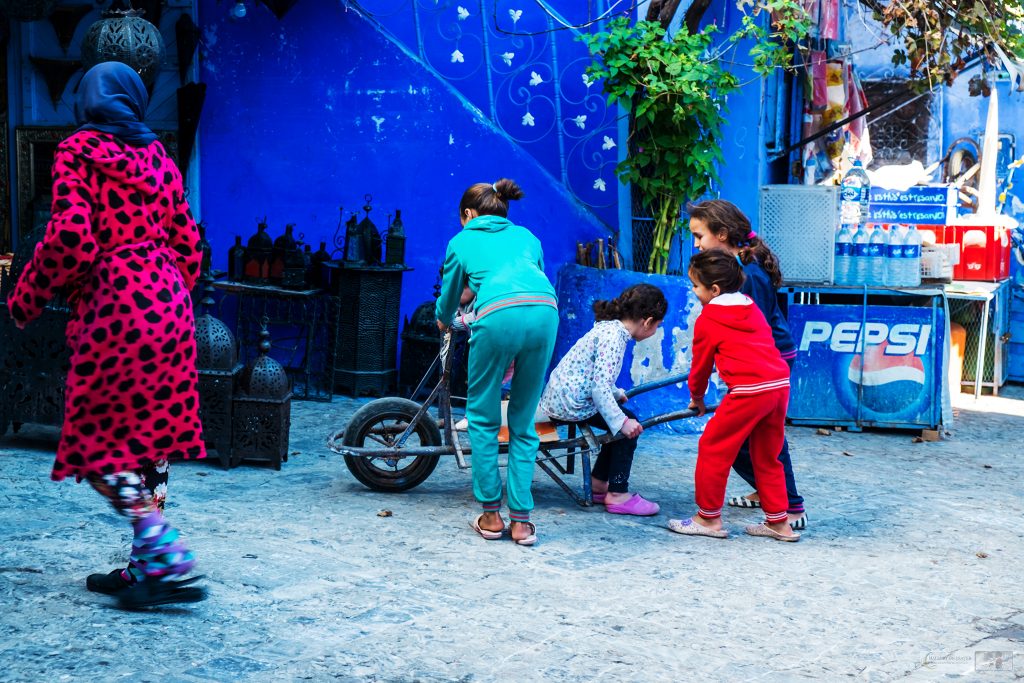 Playtime in the Blue City

Beyond the walls of the medina is a city, like many other cities, where modern Morocco snuggles up against the old town. Shops selling electronic goods and fashionable coffee shops replace the artisan stalls and traditional cha houses.

The small fort was worth a visit, but I soon find myself turning tail and heading up the hill taking me back into the sprawling maze where chaotic wandering is preferable to the order of the city.

This is the pattern of a visit to Chefchaouen, dawdling along the myriad of passageways, popping into small, blind alleys, peering through half-open doorways. Getting lost, passing the same place several times is not just tolerated, it is welcomed. 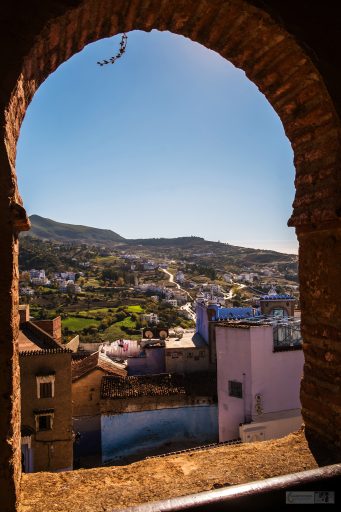 View from the fort

The people are more relaxed, less aggressive in their dealings with tourists, and although still reticent towards photography, the blue city is generally more chilled about its tourism.

Djellaba clad men sit around outside the main coffee house, sipping mint tea or the half milk, half coffee concoction known as nos-nos and smoking strong, unfiltered cigarettes, undoubtedly discussing politics, matters of the city and the demise of traditional crafts.

Women usher their young charges up and down the ancient shopping precinct, juggling heavy bags. Their own mothers often also shuffling alongside, sometimes three generations of Chefchaouen women.

Sun worshipping at the Spanish Mosque

Chefchaouen, at least the medina is an attractive city, whether strolling along the old streets of the walled city or looking down from above. I spent a couple of hours at sunset and again when the sun rose over the Rif mountains, watching from Jemaa Bouzafar or the Spanish Mosque, which is the best vantage point. Watching the shadow creep across the city one evening and the golden light of sunrise push it back the following day should not be missed.

Read about the cats of the blue city: Postcards of the Chefchaouen Cats

Early morning brings its own rewards, quiet streets save for the most business-like proprietor arriving before first light to prepare their stall. Otherwise, the alleys are only shared with the many feral cats which roam the medina, catching the morning sun, and searching for scraps in discarded boxes or unguarded bins. 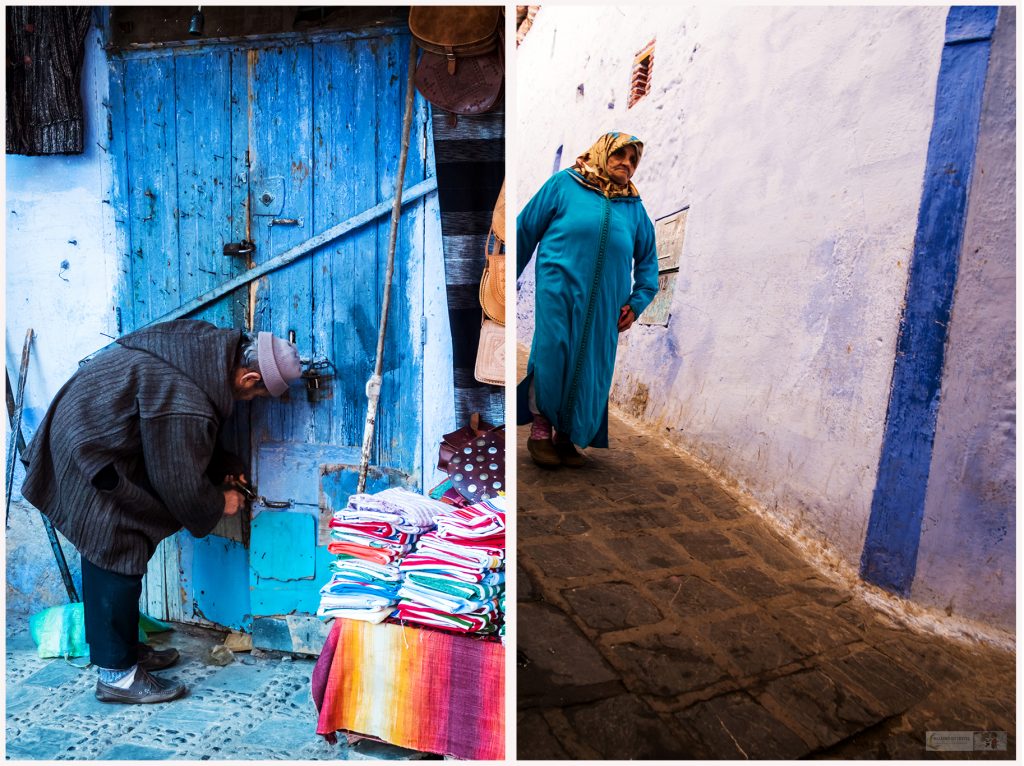 Streetlife in the Blue City

On each walking excursion to the mosque, I twice crossed Ras el-Maa, a tiny cascade which is referred to as “the source” by the residents. It is a meeting point and the local laundry, and had been recommended to me several times, as a waterfall, not to be missed. It seems not all waterfalls are born equal, as it was only on the second trip I realised this was the waterfall so wholeheartedly recommended to me. 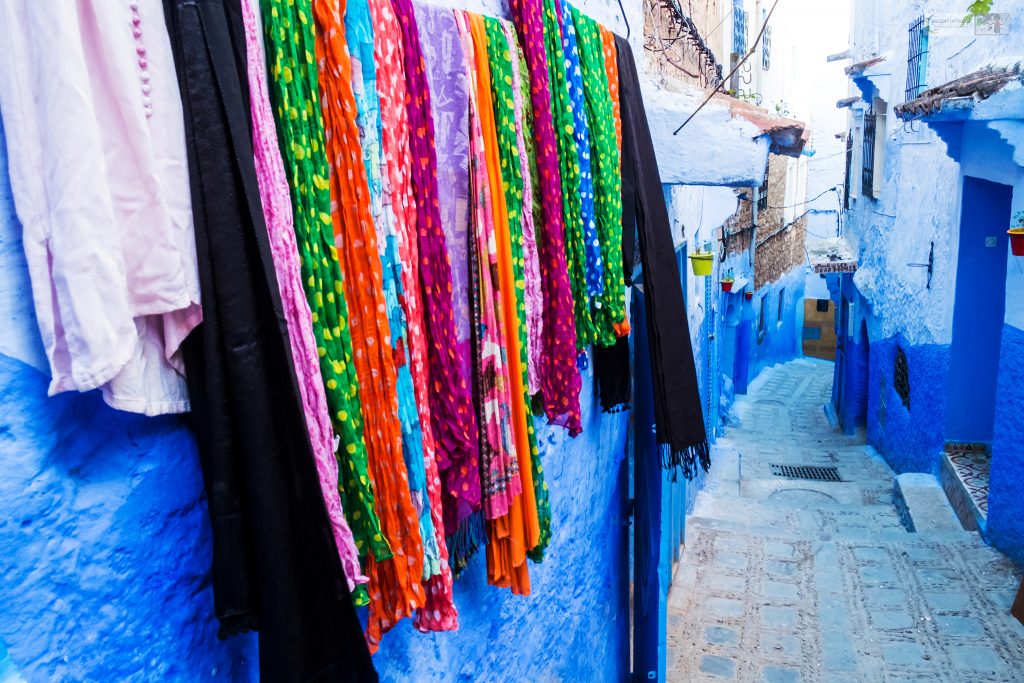 A splash of colour in the Blue City

Two days passed extremely quickly and it was soon time to head back to the souqs of Djemaa el Fna. The bus ride to Tangiers where I would catch a sleeper train to Marrakech was quite rustic in comparison to the luxurious CTM bus which had carried me to the blue city. I spent most of the journey sat on the floor, and there was even a surcharge for lifting my bag into the luggage space, which I could easily manage myself. They did make an unscheduled stop to allow me to disembark close to the station.

The return train ride was less eventful; however, I was almost disappointed, the small challenges of the journey had made Chefchaouen the complete adventure. 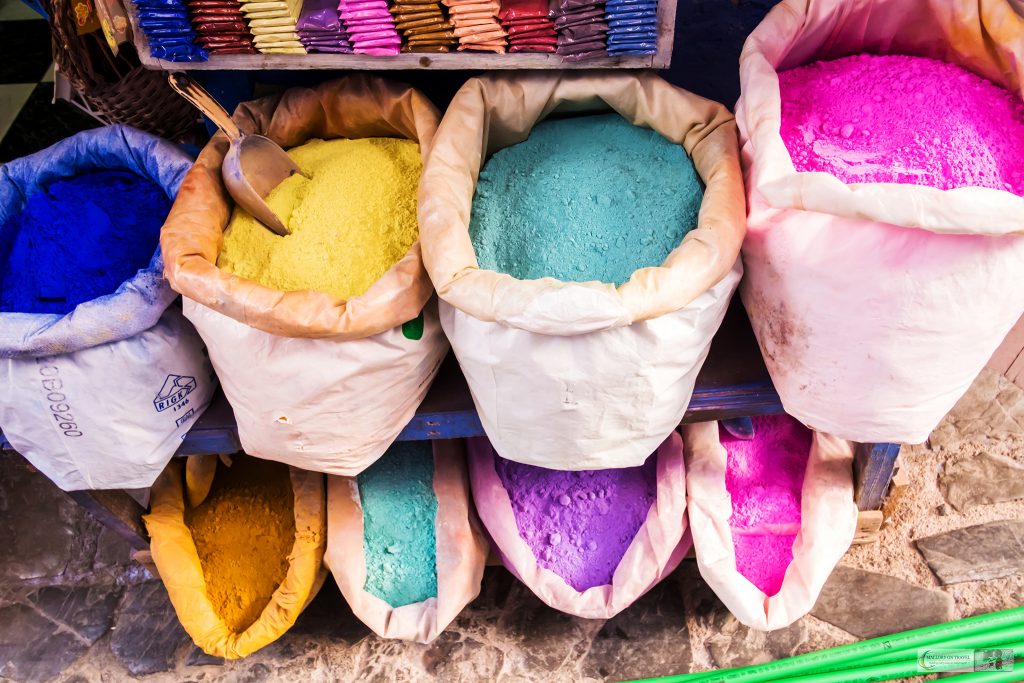 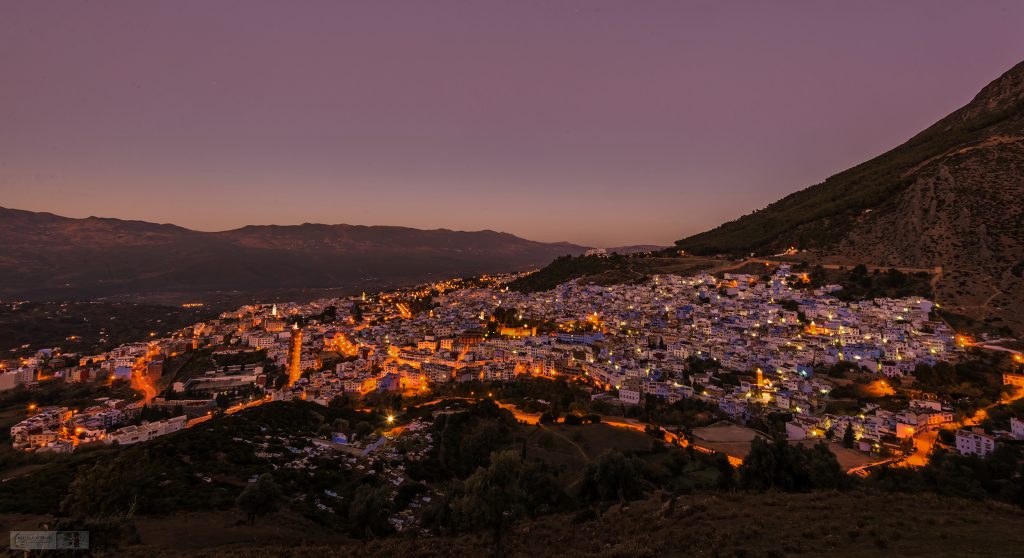 Sunrise from the Spanish Mosque