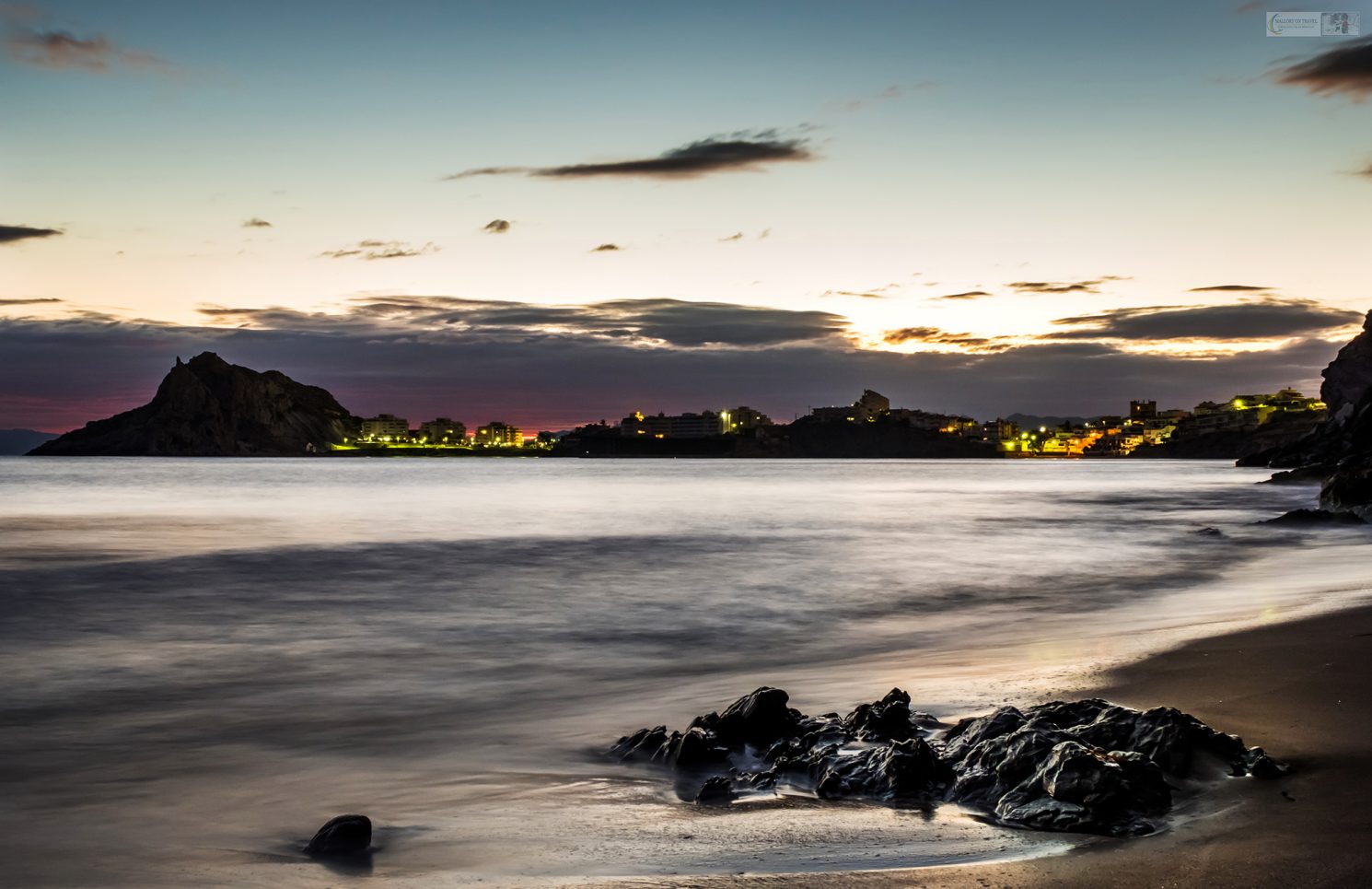 Exploring the pretty harbour town of Águilas in Murcia, Costa Cálida in an enjoyable, innovative and satisfying fashion, through a tapas tour, is recommended for all foodies. We were collected from our accommodation at the Hotel Puerto Juan Montiel, and the next few hours were spent munching our way through, fresh chicken, pork, fish and octopus on a guided tour of several tapas restaurants before finishing just below the Castillo de San Juan de las Águilas.

This fort is the high point of the city, and provides an outstanding panoramic view of the harbour, town and surrounding area. After several hours of tapas, the sun was already beginning to sit low in the sky, and when it wasn’t hiding behind some dark, brooding clouds doused the landscape in a rich golden glow.

Wandering aimlessly among the ramparts and disused artillery, we soaked up the warm autumnal weather, and views of the port. The rays of the sun escaped through gaps in the ceiling of heavy cloud, appearing to support the dark, candy floss like roof on golden pillars of light; just reward for our earlier tapas endurance. 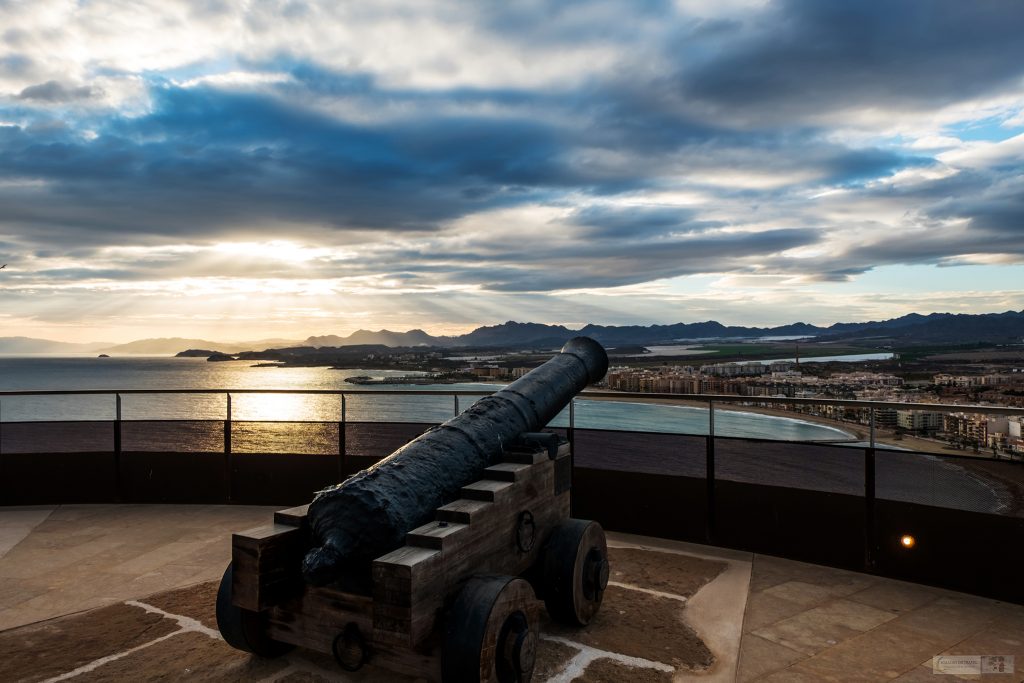 There was still time to drive to the far side of the port to witness sunset over the pier. Águilas has historical links to Britain; it is the British that built the pier and the railway which was used to transport iron ore mined in the region before being loaded at the pier for shipping. The attractive iron jetty, jutting into the Mediterranean stands tall above the waves, reminiscent of similar structures built during the Victorian era, when seaside resorts were popular in England. It’s a fitting gift to our Spanish cousins.

Sunset over Águilas and its pier

Following the coastline north for a few kilometres we were treated to another colourful sky, a vibrant palette of sunset hues over the city lights. Below our viewpoint, gentle waves lapped soothingly on the sandy shores of a shallow beach.

“After the earlier over indulgence I decided to give our first evening meal a miss, in fact, it didn’t seem likely I’d need to eat for the rest of the week!”

Fortunately, after a light breakfast we took an easy stroll along the coastline south of the hotel. The morning contrasted completely with the previous day, clear blue, cloudless skies stretched as far as we could see, while powerful waves crashed against rocky outcrops, solitary rocks and high cliffs.

More Spanish beaches: Postcards from the Beach of the Cathedrals, Galicia

There were still plenty of sandy beaches to enjoy, wandering through rolling waves, occasionally being chased up the beach by larger breakers. The cool water of the Mediterranean felt soothing, and although we were on a bit of a schedule, time didn’t seem to matter much. 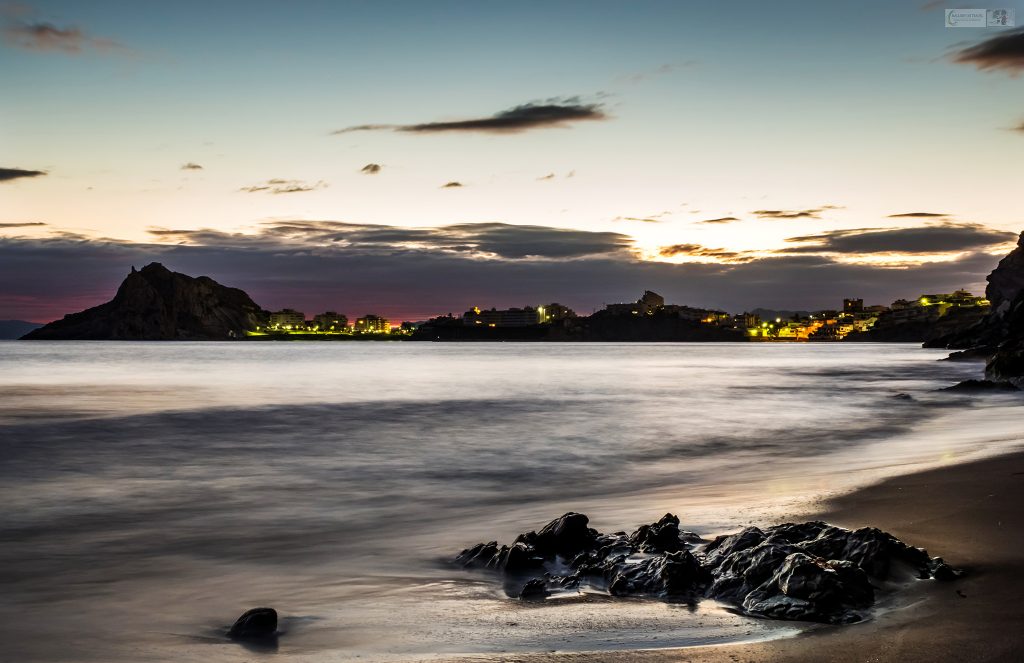 Throughout the winter months the region is popular with motorhome visitors, many from Scandinavian countries, as well as Germany and the United Kingdom, hoping to escape brutal cold or wet weather during the long winter season. Dozens of camper vans and other recreational vehicles park close to the popular beaches, such as Playa de la Cañada de Negro and Playa de la Carolina. 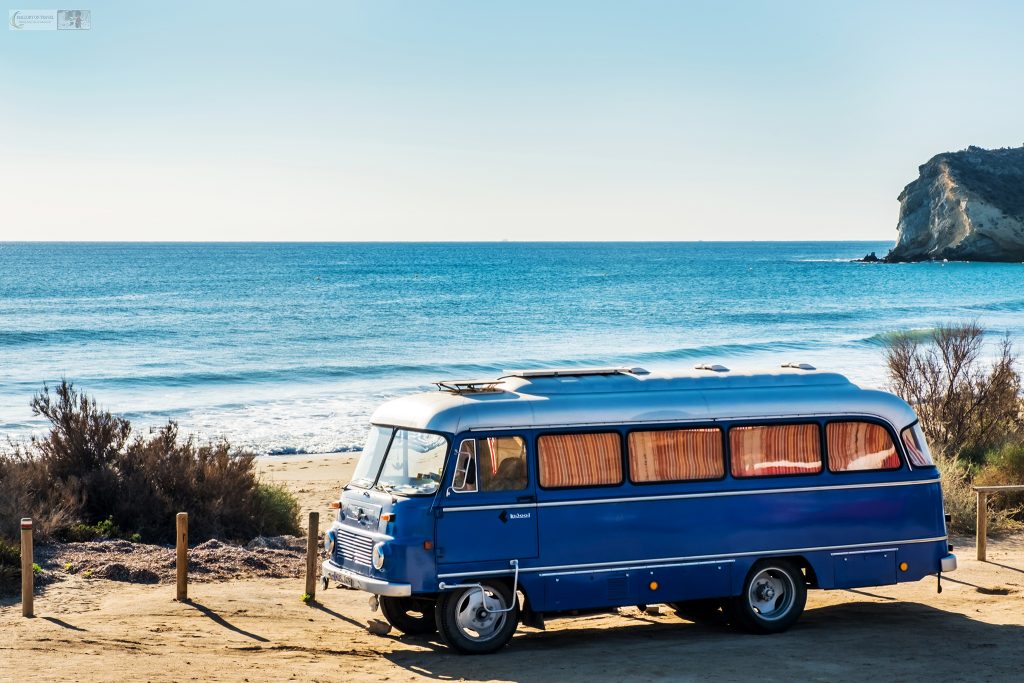 Campers on the Costa Cálida

Lycra wearing cyclists ride mountain bikes through the loose sand, ebikes are popular too, others prefer to run or walk from small inlet to rocky cove, taking in the sandy beaches which separate them. The less active set up camp chairs to enjoy the late autumn sun, possibly barbecuing frsh fish bought from the local food market. 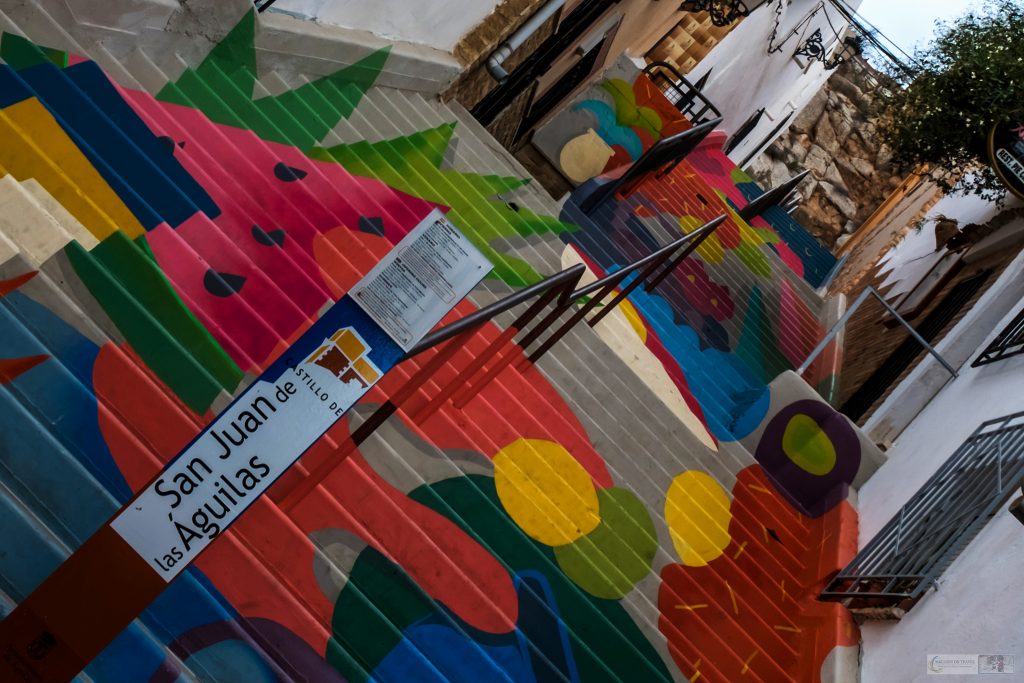 Colourful steps to the Castillo

Águilas was otherwise relatively quiet now, however, in late February or early March the city apparently comes alive. This is when it holds Fiestas of the Carnivals of Águilas, a festival of colour, masks and costumes, culminating in an egg battle, it is one of the largest carnivals in Spain. 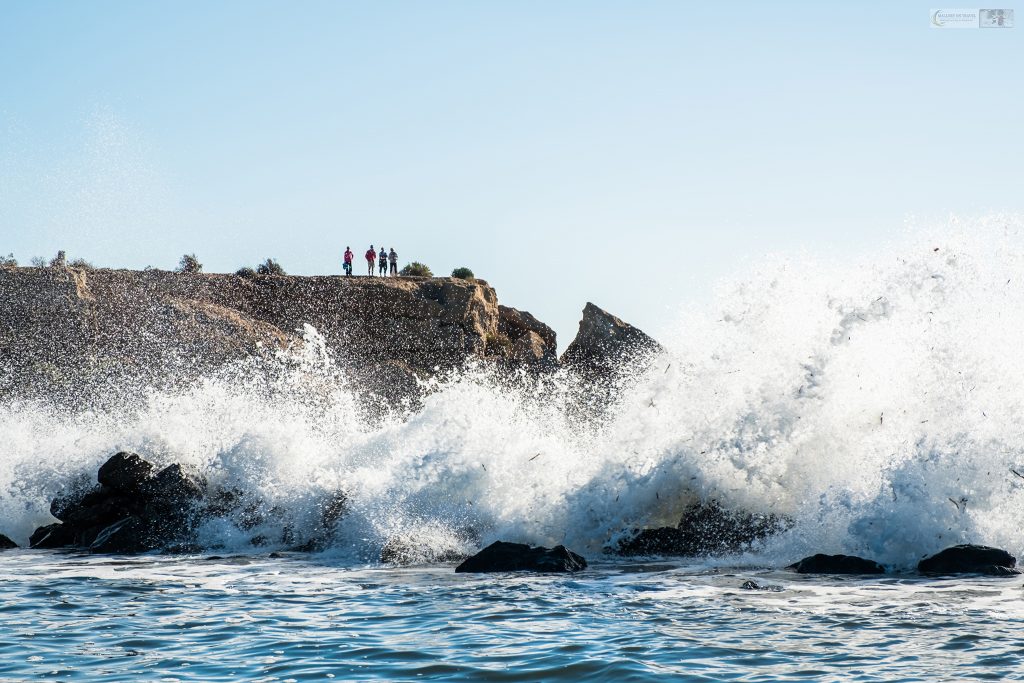 To sum up, Águilas is about tapas, a fortified viewpoint, sunsets, easily accessible sandy bays and beaches and an egg battle …… must see Murcia in a nutshell. 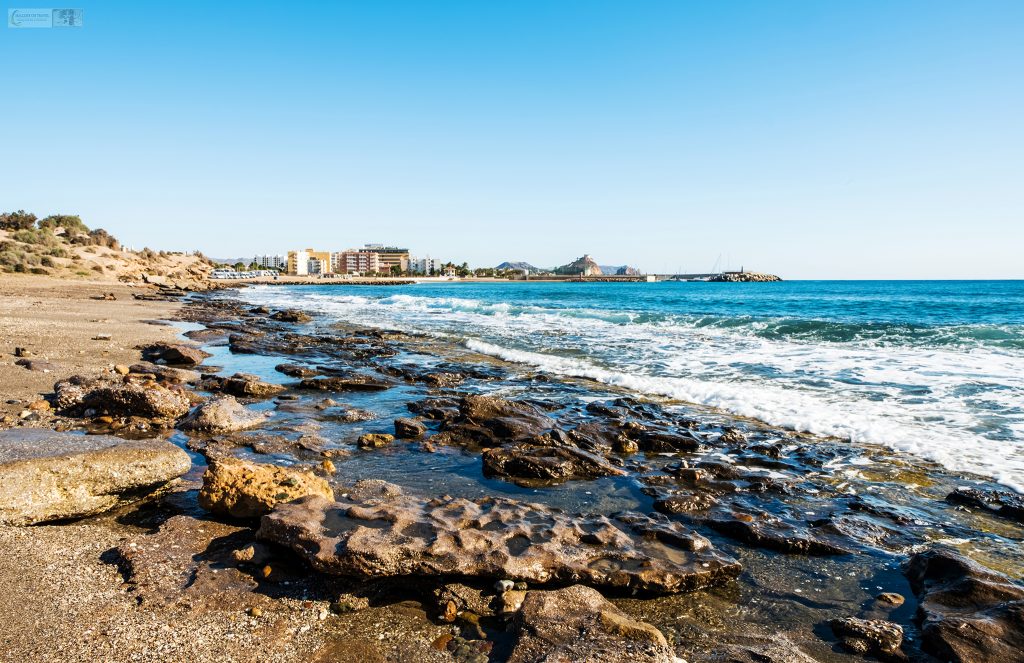 The view towards Águilas