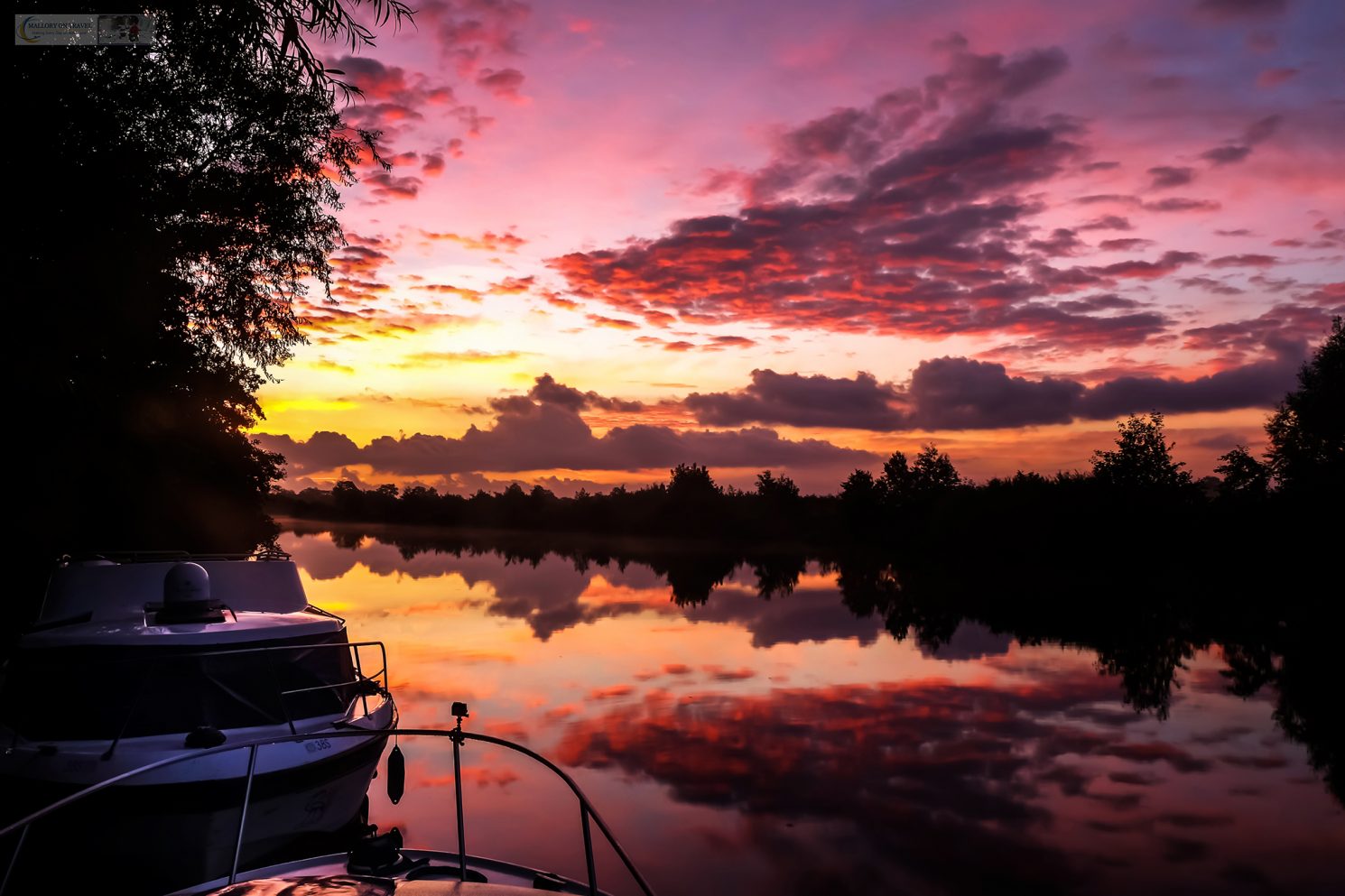 The motor cruiser chugged towards the setting sun, steering was easy once we’d realised it doesn’t react immediately and takes a few moments to respond. There had been a short familiarisation brief from Jason of Herbert Woods, where we’d learned how to steer, turn and moor the boat, now we were on our own, with the Norfolk Broads as our playground for the weekend. 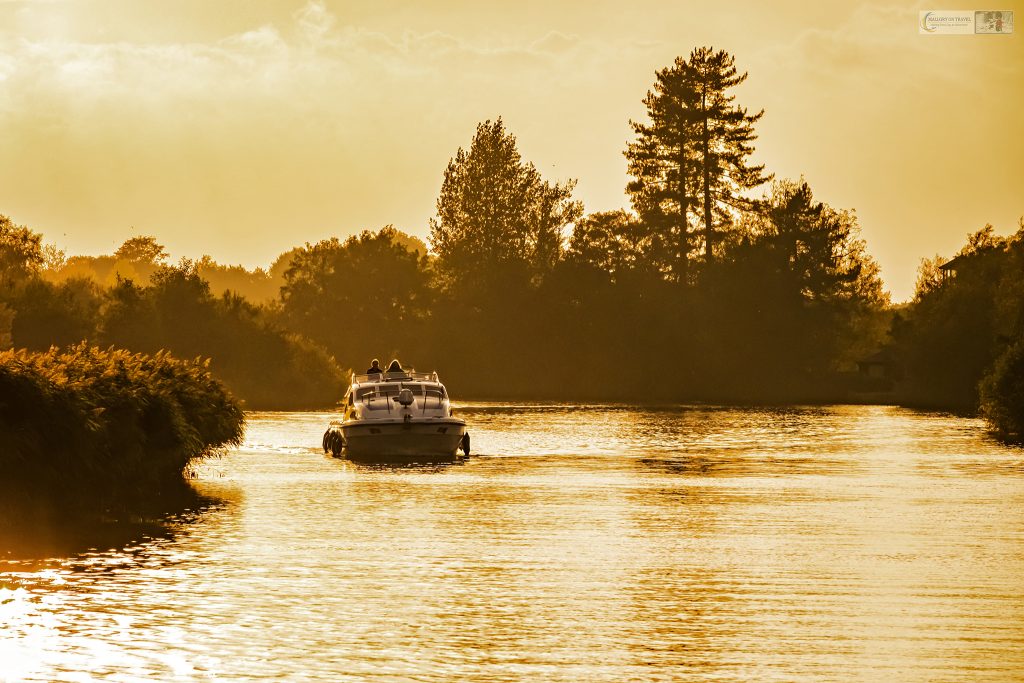 Autumn gold on the Broads

As it was late in the day and the light of day was already ebbing way, the suggested mooring for the evening was at a small mooring near the windmills of Thurne. The small community is pretty, however, we decided to travel on to St Benet’s Abbey, described as an icon of the Broads, it seemed a more suitable place to spend out first night in a motor cruiser.

“We had brought our best friend with us. Spike, our pocket wolf, but he didn’t seem to be overly fond of cruising at first. He seemed especially indignant about the lifting on and off the boat, he even took to crossing his legs rather than admit he needed the little pup’s room” 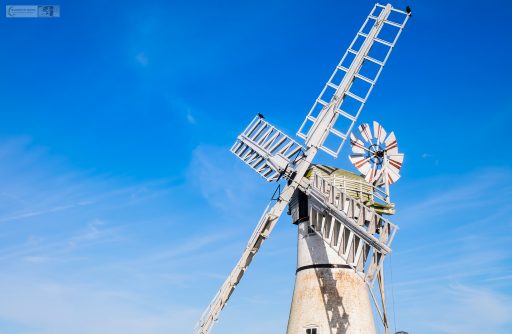 Sails against a marble sky

The following morning provided a gloomy, somewhat moody view of the abbey, a thick soup of cloud hung over the derelict arch and tower of the mill. The abbey however, looked particularly atmospheric under its murky ceiling, a watery autumnal sunrise with just a hint of colour and, the weather was promising to improve. In fact, this was the only morning the weather wouldn’t be kind to us.

“The Norfolk Broads is apparently one of the driest places in the United Kingdom, and this mid-October weekend, under blue skies marbled with streaky clouds, I wasn’t about to argue”

Chilled out in the Norfolk Broads

Cruising the Broads is remarkably relaxing, there’s a strict rule that the boats aren’t allowed to produce a wash and cruising speed is limited to 5 mph, basically a fast walk. There doesn’t seem any reason to go any faster anyway, so we happily chugged from sunrise to sunset along the picturesque waterways of Norfolk.

More from the Broads: Postcards from the Norfolk Broads

There was plenty of birdlife sharing the slow-moving waters of the Broads with us, swans, geese and ducks, along with grey heron and great crested grebe. The swans often seem oblivious to the boats, swimming almost directly at us, swerving at the last possible moment. Although I did witness a young cygnet miscalculating the path of a cruiser, and the necessary avoidance trajectory, causing it to bounce off the bow of the boat. It merely ruffled it’s feathers indignantly and continued its merry way. 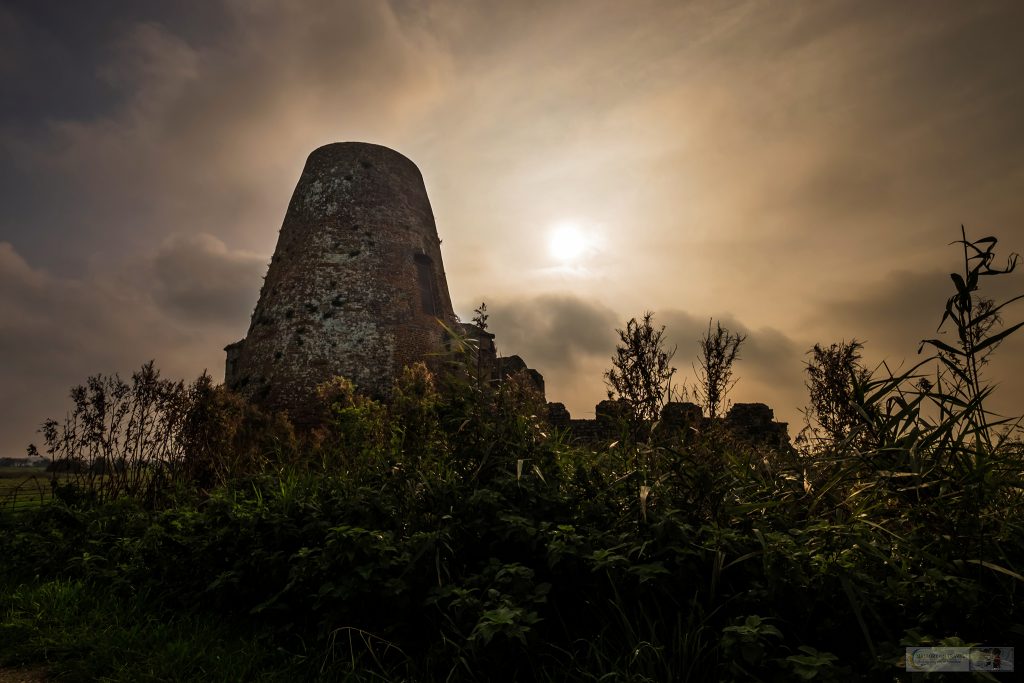 We passed through several pretty villages, but our intention was to stop at Wroxham, which appeared the largest town in the area. Moorings were to prove our undoing however, there didn’t seem to be any public moorings before the town bridge. As the tide wasn’t low enough for our cruiser to pass beneath the bridge, we were stumped. Our plans for a pub lunch and a chance to explore Wroxham were thwarted, which was a bit of a shame.

“Oh well, on we chugged, nothing to dwell on, cruising the Broads is too relaxing to get upset about anything for more than a moment” 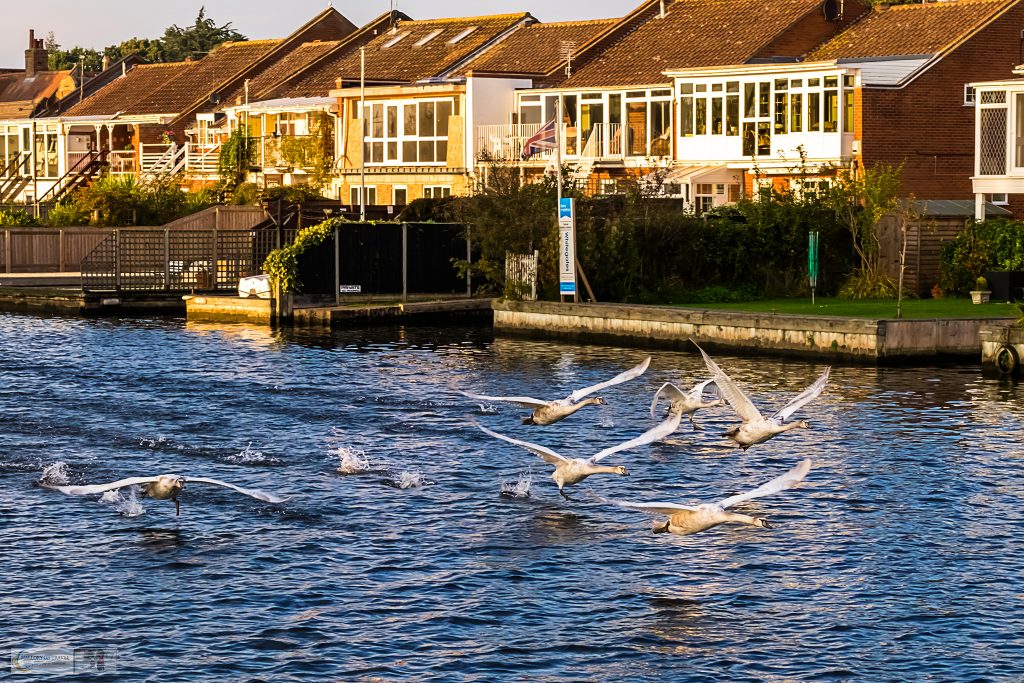 We were even provided an escort out of the town, a small squadron of swans, taking off and providing a feather filled fly past. Who needs the red arrows?

They do things differently on the Broads; we consoled ourselves with ice cream, bought from a floating ice cream boat. Like a traditional van on wheels, it was colourful, with a giant model of the product to ensure there was little doubt about what he offered. Just seeing it made me smile, the ice cream; a bonus. 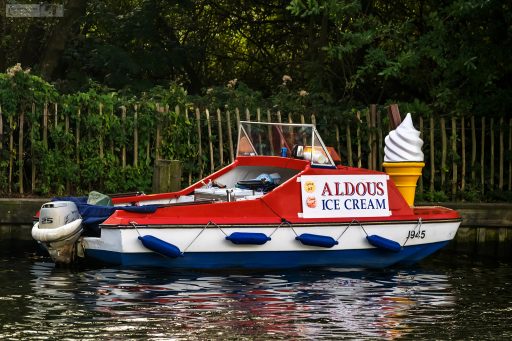 The living space on the cruiser was cosy, a double berth and two singles, plus a small kitchenette and two showers with toilets, still it means there isn’t much to clean, another bonus! It’s necessary to ensure the water tank is refilled daily, and there are a few maintenance checks to be completed too, checking the radiator, oil and the reed filter. Five minutes and it’s all done, plenty of time to relax then.

Our minimal experience of boat handling meant reversing the boat into rear end moorings was a bit of a challenge at first, but once we realised, using the bow thrusters isn’t cheating, both Alison and I found it relatively straight forward.

Just as well, because we needed to reverse into the mooring at the village of Ranworth, where we discovered a lovely village pub, the “Maltsters”. A real fire, friendly welcome and a delicious Sunday lunch of roast beef, our reward for persevering with our reverse cruising skills.

We were soon back to cruising the murky, slow moving waters of the Broads, contrasting against the yellow and brown reeds, green fields and the autumnal hues of trees just beginning to succumb to the change of season. Broad leaves turning yellow, through orange or even red, before drying out and falling to the ground forming a crunchy carpet. Some landing in the water, floating slowly on the gentle current, eventually sinking to the bed, possibly an explanation for the rusty colour of the water.

Fall Colour on the Norfolk Broads

The sun skated lazily across the October sky, never rising too high and coating the countryside in a golden shroud throughout the day. By evening however, the shroud seemed to have been given a good shake, throwing the colour into the sky and turning the ruddy coloured water to liquid gold.

Read about our highland adventure: Roadtripping the Highlands and Islands of Scotland

Cormorants used the sails of windmills as perches and small flocks of starlings seemed to tease with the promise of a murmuration. Flocks consisting of just a few birds joining together to swirl and dance across the fire filled sky, almost in choreographed unison.

Returning to the familiar surroundings of St Benet’s for our final Norfolk Broads sunset, we were treated to the most spectacular evening so far, as if the national park planned to send us off with a memorable finale. It seemed appropriate to pour a mellow single malt and sit out on the upper deck, sipping, savouring the fiery liquid, which warmed our bellies, while drinking in nature’s palette, slowly ebbing away until the big Norfolk sky seemed drained of all colour. 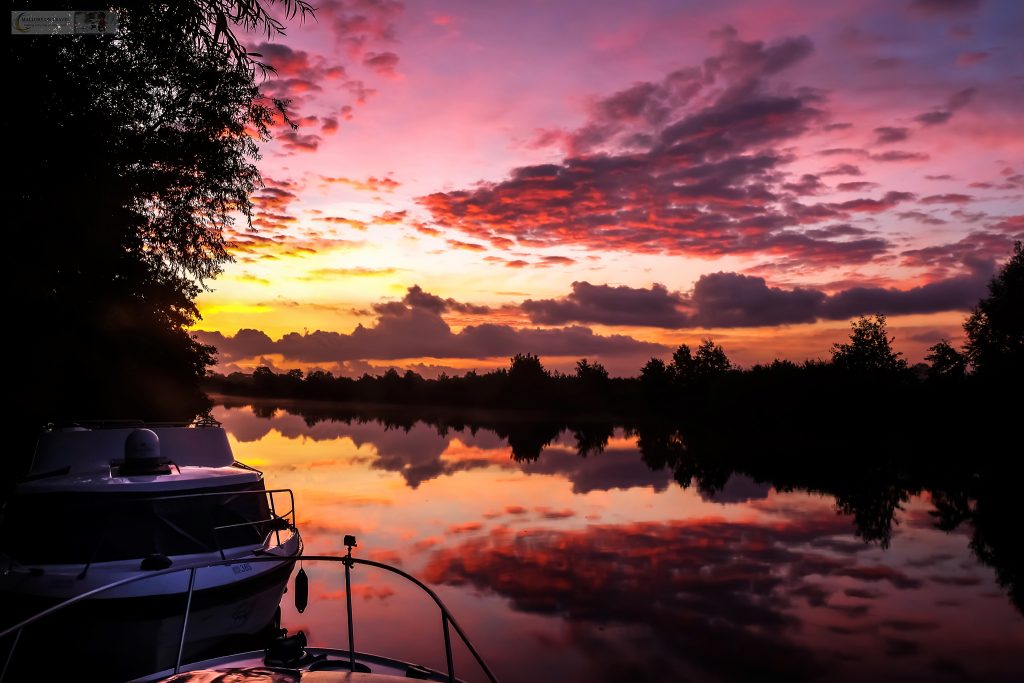 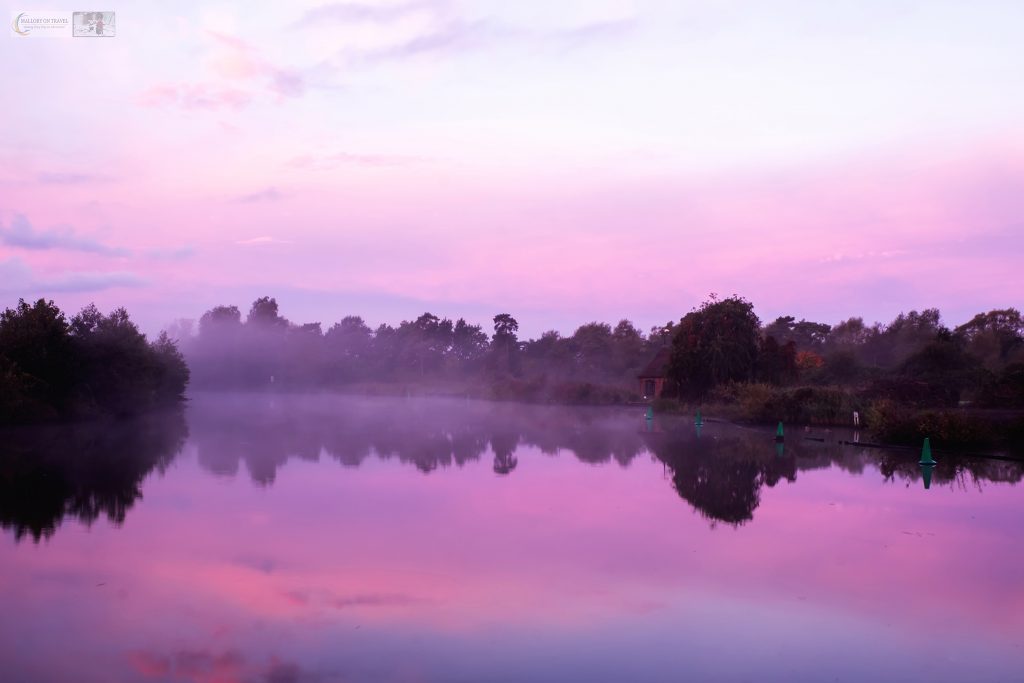