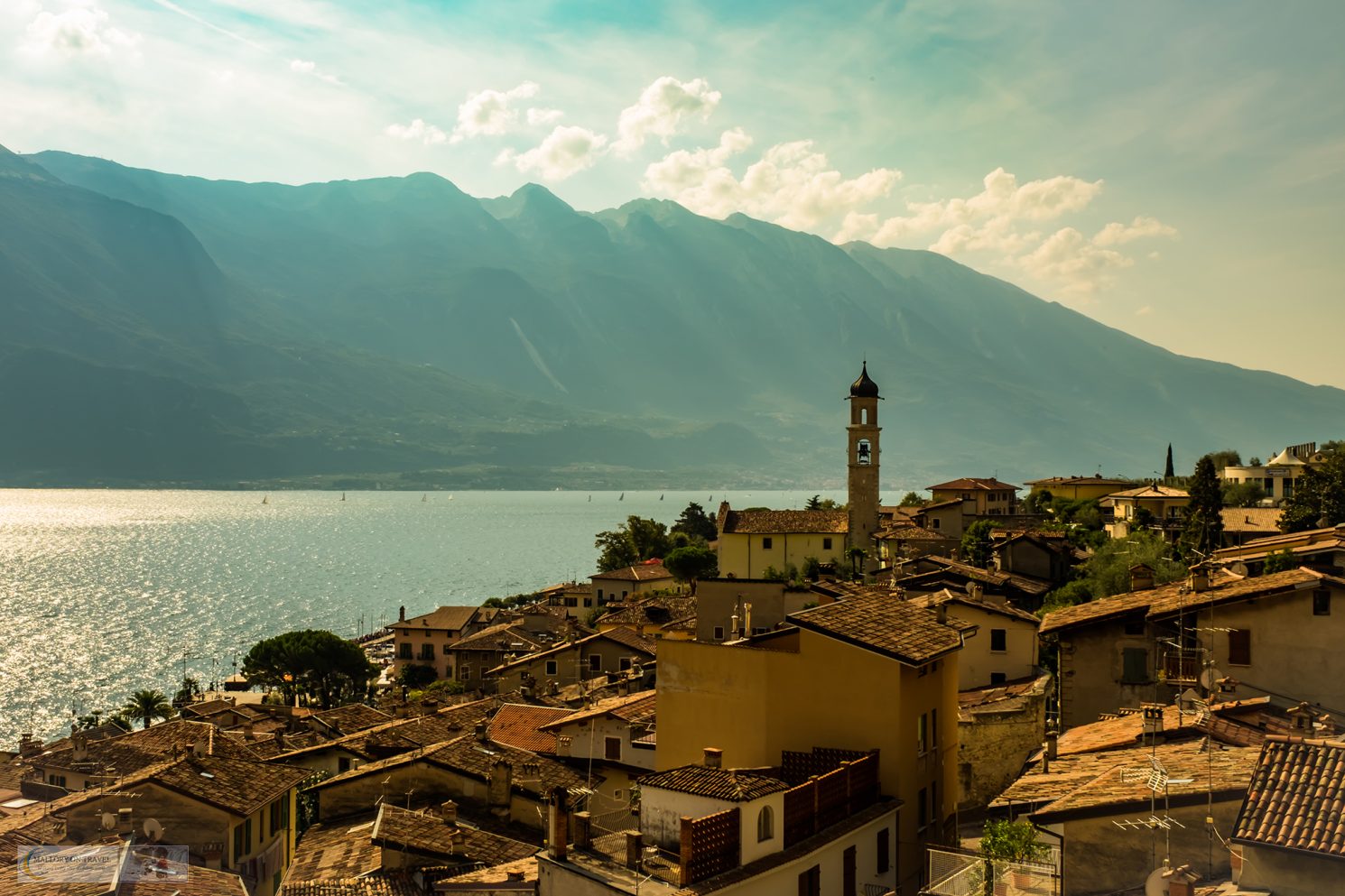 Lake Garda is the largest lake in Italy and one of the country’s most popular holiday destinations. Slightly longer than 50 kilometres and up to 350m deep, it is located in Lombardia, within the Dolomite mountains at the north of the country. It was once part of Austria, and the influences can be seen in some of the buildings and even the oldest yacht which still sails on the lake.


Small towns are dotted along the shores, distinct and with individual character, and ‘town hopping’ along the shore, enjoying the flavour of each is part of the appeal. Small lakeside markets, and chic restaurants or bars in redeveloped old buildings have an Italian charm, which provide good cause to linger.

Surrounded by the mountains, particularly in the north, the wind is channelled down the lake, making it ideal for watersports, such as sailing, windsurfing and kitesurfing. It is also the home of the Centomiglia regatta, an annual one-hundred-mile yacht race.

Among the cleanest lakes in Europe it has always been popular with Tyroleans and Bavarians, reachable within two hours from these mountain regions. Popularity has increased with the advent of cheaper flights, with visitors from all over Europe now discovering the charm of Lake Garda.

Capital city: There isn’t an actual capital city, however Desenzano is the largest by population.

Other principle cities: Riva del Garda, Garda and Torri del Benaco, while the towns of Salò and Gardone are known as the Gardone Riviera.

Read more about the Centomiglia here: Postcards from the Regatta; Centomiglia, Lake Garda

Main airport/s: Verona and Brescia are the closest airports, while the airports of Milan and Venice also service the region.

Principle airline: The national carrier, Alitalia, along with several other major airlines fly into Verona from destinations throughout Europe.

Visa requirements: Citizens of member states of the European Union can stay for an unlimited period. Those of Australia, the United States and Canada can remain for up to 90 days. All others should check with the embassy for requirements.

Language: Italian is the first language, while in some of the more remote areas of the Dolomites, German is also widely spoken. Understanding of basic English is becoming more common, while with so many German visitors, this is commonly spoken throughout the region.

Weather: Blessed with a Mediterranean type climate, balmy and sunny much of the year. The lake reflects the sun and the mountains keep the warmth in, it can be quite dry and hot during the summer months. The wind funnelled by the mountains often blows, providing a cooling breeze and is the engine for the many watersport users which enjoy the lake.

Currency: As a member of the EU single currency Italy uses the Euro.

Cash: ATMs are widespread, and any of the bigger towns are likely to have several available.

Train: There are stations at Peschiera del Garda in the south, while the town of Rovereto, near Riva del Garda is the closest rail access to the north of the lake.

Bus: Public buses link the towns of Lake Garda, tickets available at tourism offices, tobacco sellers and on the bus for a supplement. In the peak months and at weekends traffic can be heavy, so bus journeys can take several hours.

Car: The roads during quieter periods can provide a pleasant alternative to touring the towns by boat. Ferry services run between the towns of Limone/Malcesine and Torri del Benaco/Maderno. Hop on hop off tickets are available for full or half days and are available at kiosks by the jetty. Buy in advance or allow plenty of time as queues can be long at peak times.

Accommodation: The region is a popular tourist destination and therefore visitors are well catered for in most towns.

Eating out: Dining out is a pleasure, fresh fish dishes from the lake, pasta and pizza, along with excellent wines, after all this is Italy. International cuisine is also available, but excellent options include:

Nightlife: While the closest genuine night club is probably located in Verona, there are plenty of stylish bars on the Gardone Riviera and the other towns of Lake Garda.

Attractions: The lake and the towns which have grown up on the shores are the main attraction, but there are a few other places of interest worth seeking out

1. Gardaland – a theme park located at the south end of the lake, for white knuckle riders needing a fix.

4. Bardalino – is a centre for wellness and beauty therapy, with thermal spa baths.

5. Sirmione – is a medieval town with prominent castle and favourite of artists also has thermal baths.

6.Mount Baldo cable car – located in Malcesine, taking a trip to the viewpoint restaurant at the top provides outstanding views of the lake.

7. Peschiera del Garda – with its 16th Century walls, this is a picturesque town at the southern end of the lake worthy of special mention.

Tour Operators: This popular Italian destination is well served by the main and smaller tour operators; a quick search will discover plenty of choice.

Almost all of the towns boast market days with lakeside markets selling delicacies of the region and hand crafted goods for those who like to browse.

It is important to be aware of theft, in the markets and theme parks. Bag drop off points in the theme parks are left unattended.

Aperol Spritz is a popular summer drink of the region and locals or visitors alike can be seen sipping it at any of the lakeside bars.

Civic pride is means the towns are graffiti and litter free, anybody dropping litter in the streets are unlikely to make many friends.

Bike rental is popular and a good option for some easy cycling, ask at your hotel too, as several offer free bikes for guests.

There is a lakeside path which links the southern towns of Garda, Bardalino, Lazise and Peschiera del Garda. The ferry services also stop at these towns so it’s a great way to tour the southern shores.

Further Information: The inLombardia and Explora sites are great resources for visitors.

Don’t confuse the towns of Garda or Riva del Garda when making arrangements to meet friends or you will be late!

and finally……. Italians appreciate visitors making an effort to speak in their language, so take the time to at least learn the basics. Hello, goodbye, please and thank you will hold you in good stead.