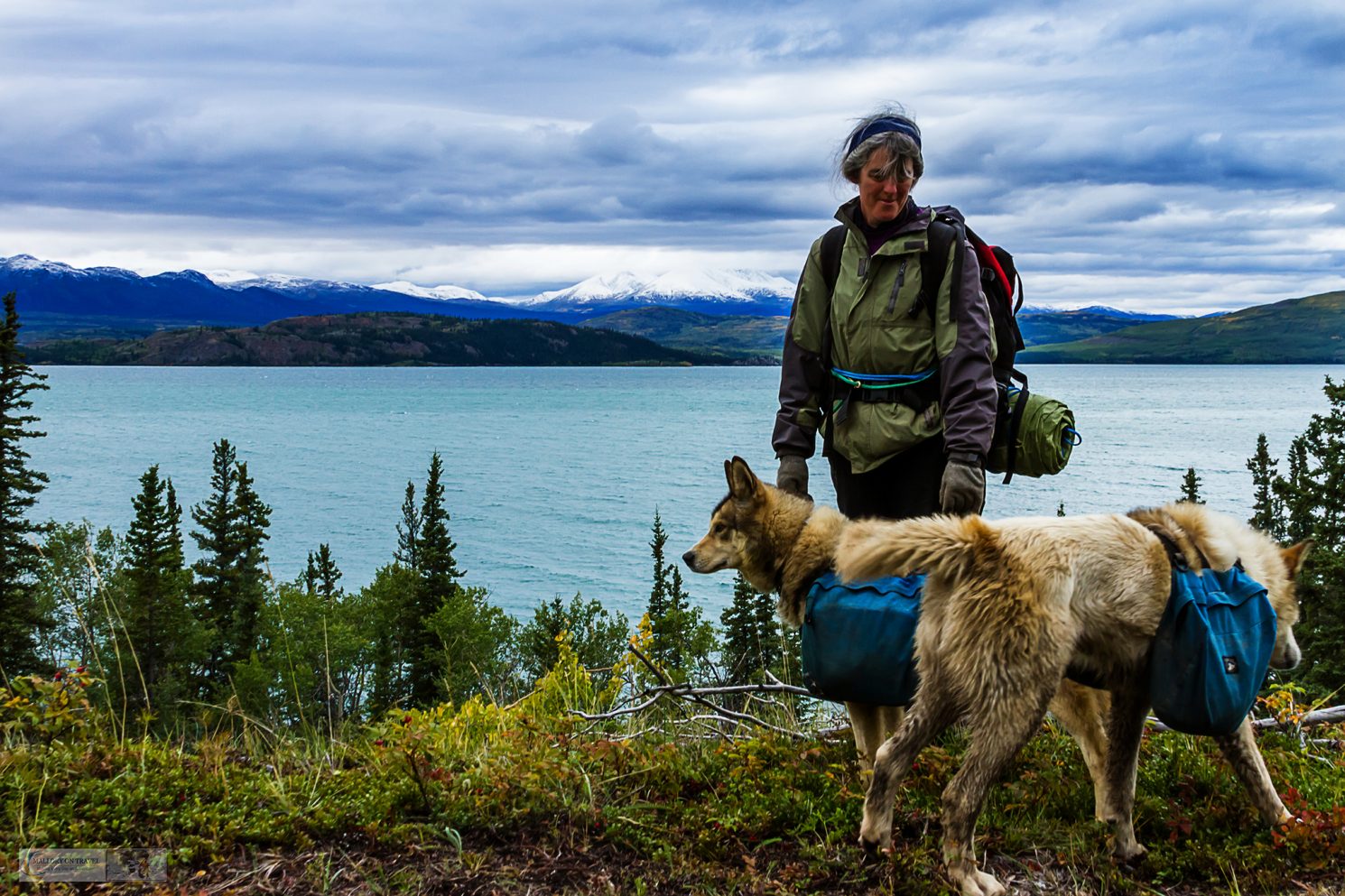 Have you ever slept with around fifty sled dogs? If so, you might be surprised to hear when I did, it was one of my most peaceful night’s sleep ever experienced. My humble abode for the night was a tiny little cabin on the shores of Lake Laberge, about an hour from Whitehorse, with a mixed pack of dogs less than a hundred metres away. Under the night sky of The Yukon, without a bark or howl, I slept soundly.

Call of the Wild

Anytime the directions to a destination end in the immortal words “stop once you hit the water of the lake”, an adventure seems likely. Soon after leaving the outskirts of Whitehorse, the wilderness closes in, and the normal rules of civilisation and navigation cease to apply. After a short wait Ned, the owner of family run business Cathers Wilderness Adventures arrived with his boat.

“We wanted more of a Bush experience, a race that would put a little woodsmanship into it” Leroy Shank

Read about the Northern Territories here: Inconnu Lodge – Serenity in The Yukon

Crossing the lake is the only way to get to their lodge, boat or kayak in summer and by sled dogs when it freezes over in winter. The main lodge is surrounded by several smaller guest lodges, and the Wendy house sized lodge which was mine for the night. Creature comforts were in short supply, without a shower or even running water and the lights required hooking up to a car battery; this is true wilderness living. 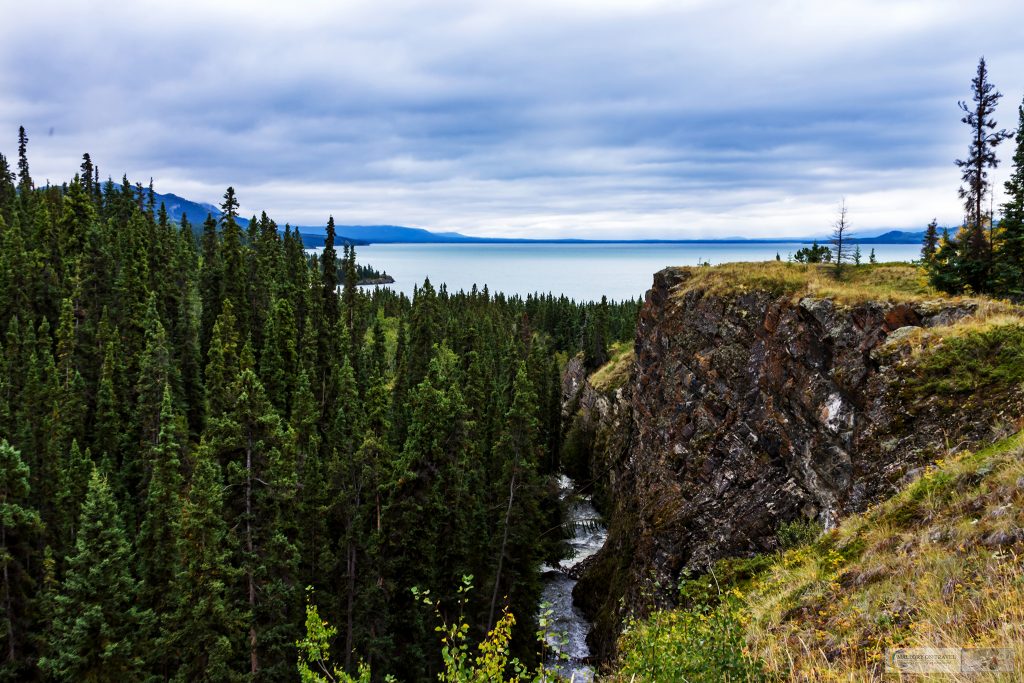 If You Go Down to the Woods Today

The early autumn weather didn’t look especially promising, threatening rain, but almost immediately after dropping my bags off it was time to lace up my hiking boots for a walk with the dogs in the woods. A small pack of dogs, sporting miniature saddlebags escorted us up a few hills, bushwhacking our way through some thick woodland, up to the high point which provided some impressive views across the lake.

It was late August, and yet there was already a dusting of snow on the high peaks in the distance. Summer is a short season here, autumn comes quickly and is then soon chased off by winter. Although there were plenty of evergreen conifers, there was also plenty of fall colour beginning to tint the leaves of The Yukon. 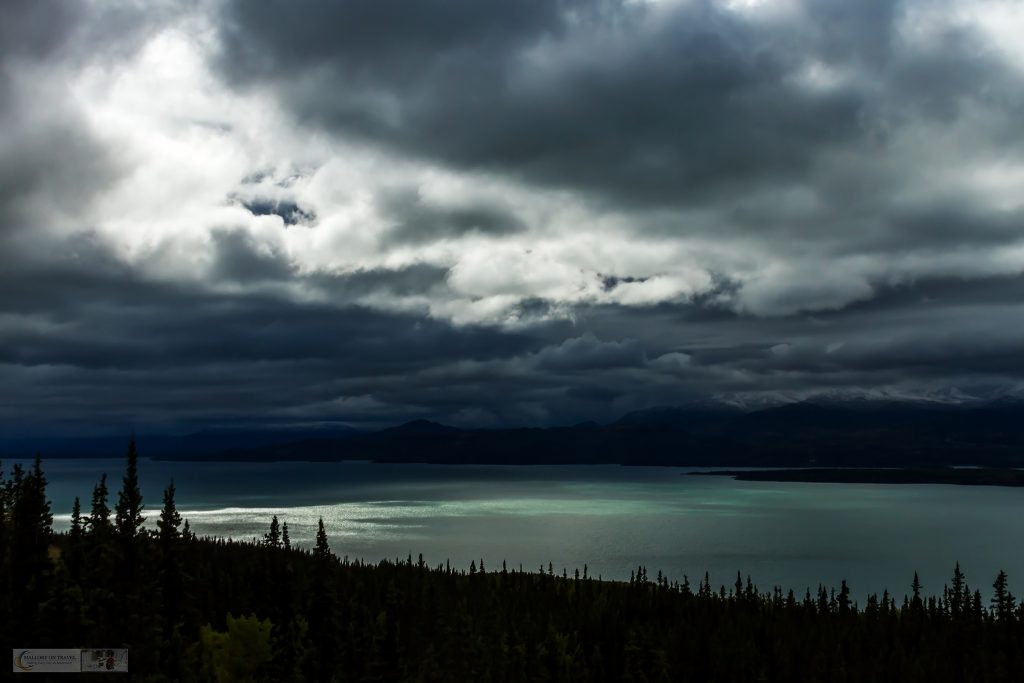 Dark skies of the wilderness

The rain remained at bay, but the clouds still threatened, thick and brooding, which is a shame as this far away from any light pollution, a clear night sky must be spectacular. Plus, there is also a very good chance that the sky will dance, lighting up with a stunning aurora.

Ned and his daughter Jeninne, look after the sled dogs, both are adept mushers and the bond between them is obvious. Jeninne is the youngest ever competitor in the notorious Yukon Quest, a one-thousand-mile sled race which follows “the highway of the north”, the Yukon River from Fairbanks to Whitehorse. Dad Ned, plans to become the oldest when he competes again in three years at the sprightly age of seventy-five!

“The Quest was conceived by four Alaskan mushers, LeRoy Shank, Roger Williams, Ron Rosser, and William “Willy” Lipps over a beer in the Bull’s Eye Saloon, Fairbanks in Alaska. They disdained the manner in which the premier sled dog race the Iditarod had developed. With stages and checkpoints, as well as the commercialisation of the event, they apparently craved an endurance race based on a survival skills” 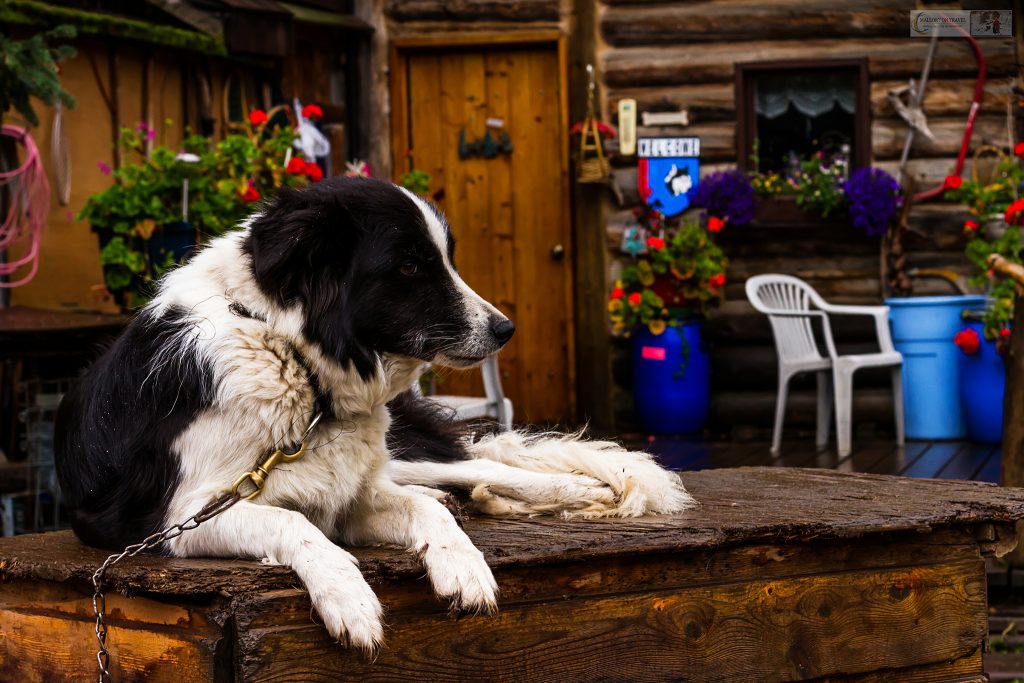 After enjoying an al fresco dinner, wilderness style, grilled at the side of the lake, I joined Jeninne in feeding the dogs. Chained to posts to prevent them wandering, the dogs barked and strained at their restraints, eager to wolf down their meal. The chances of a good nights sleep seemed somewhat remote.

Half the dogs are on an experimental special mix, and it was impressive that both Ned and Jennine not only know the name of every dog but the correct feed and the portion size individual to each one. Put me in a room with three people and I’ll soon be referring to them as mate or hunny, their names escaping me within minutes. 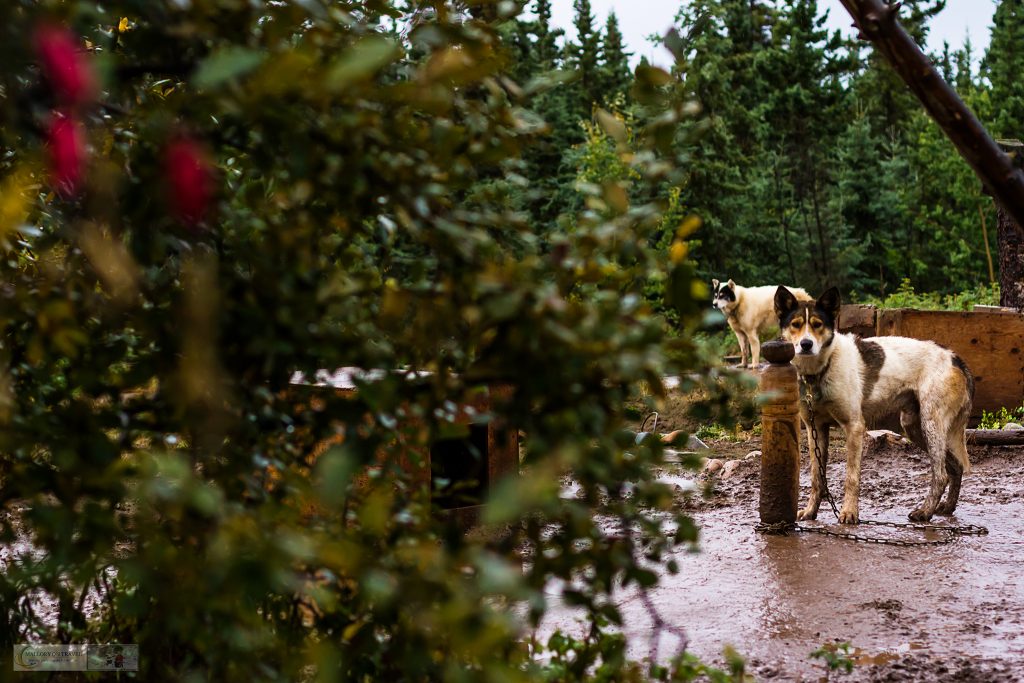 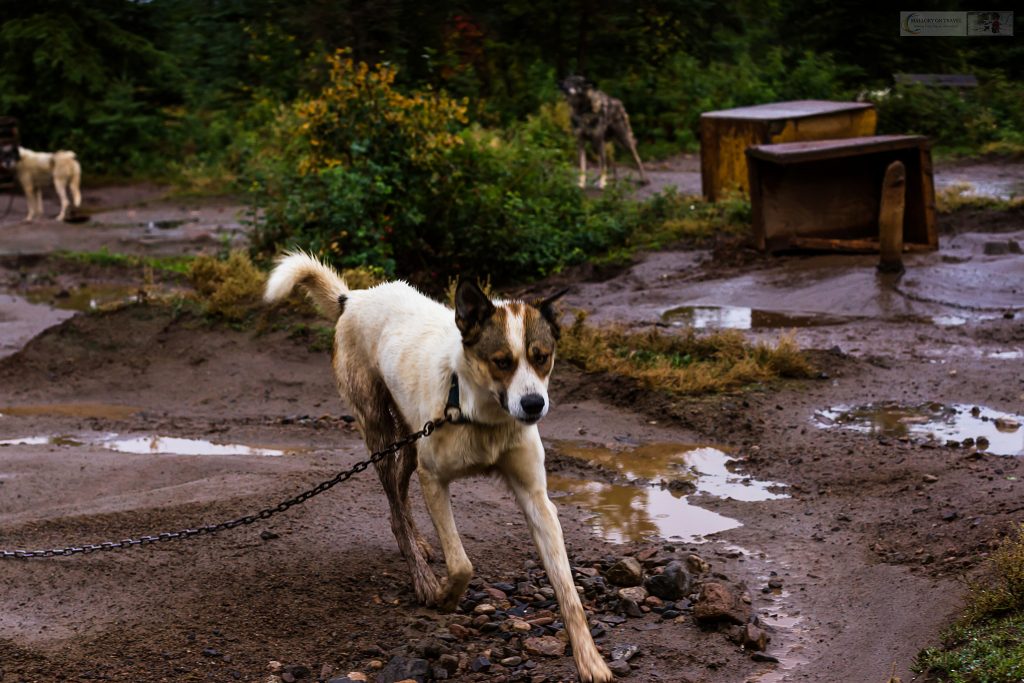 Then again, I’ve never forgotten the name of a dog!

The Cathers also keep a couple of good looking horses, which wander around the grounds near their stables grazing on the grass. A chestnut and black, they weren’t forgotten at dinner time, Ned ensuring they got some fresh hay before taking over dog feeding duties.

Read more from my Yukon roadtrip here: Tales from the Road – The Yukon 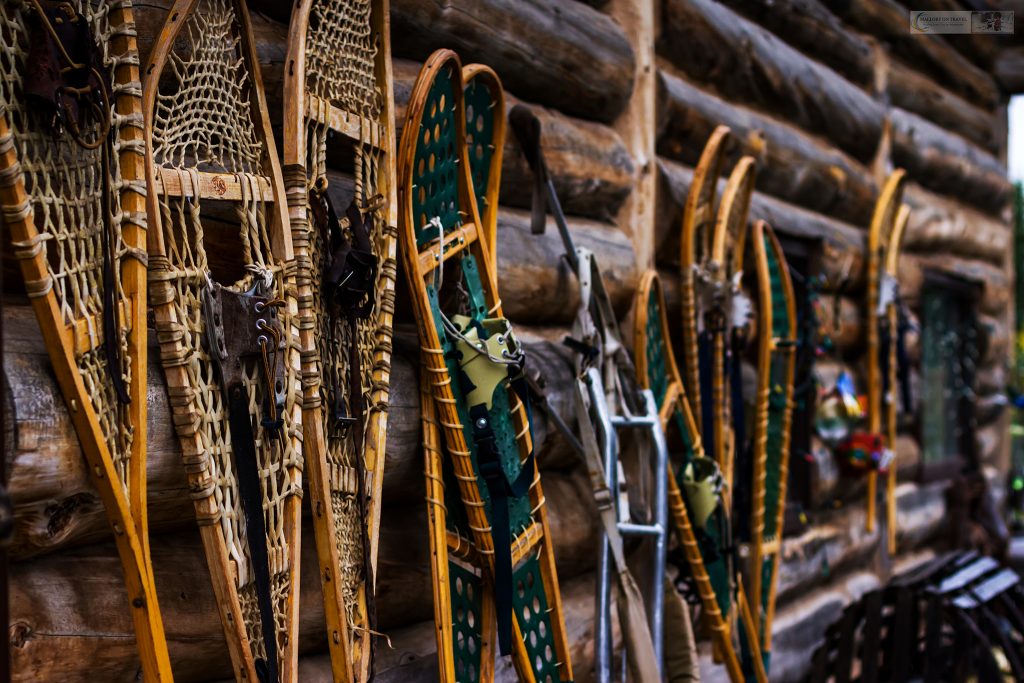 After feeding time the dogs soon quietened down, possibly settling in for a wet night. It was already dark as I made my way to the little hut, remembering that Ned had mentioned bears were often found close to the tiny lodge.

Fortunately, neither sled dogs or bears bothered me that night and the only noise which disturbed the silence of the wilderness is likely to be my snoring as I slept soundly. 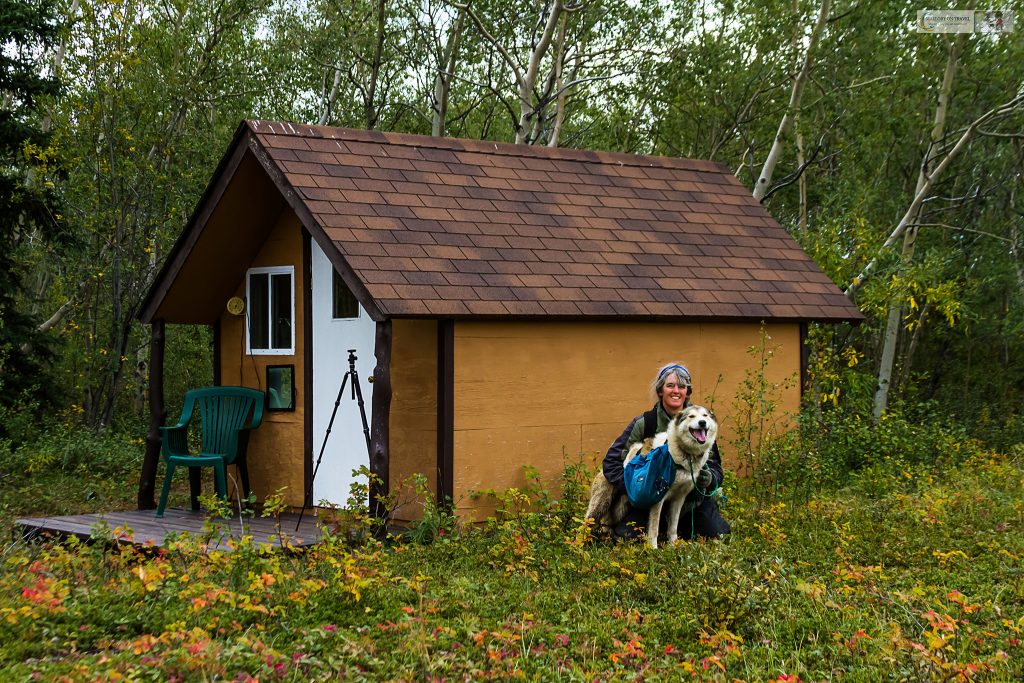 Jeninne and friend outside my little lodge 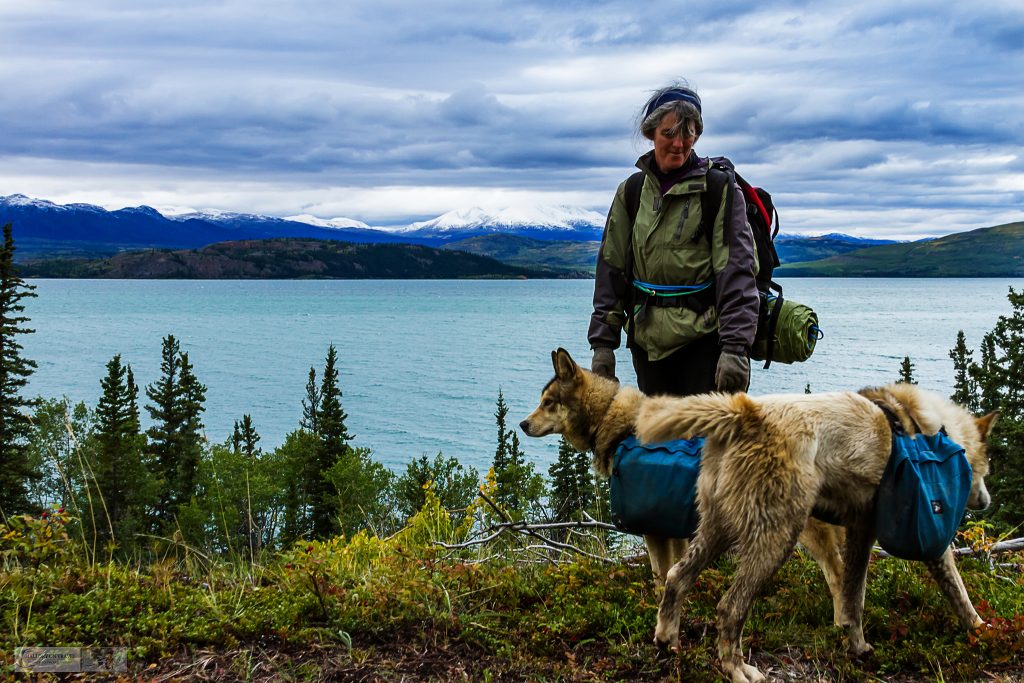 Jeninne with her best friends