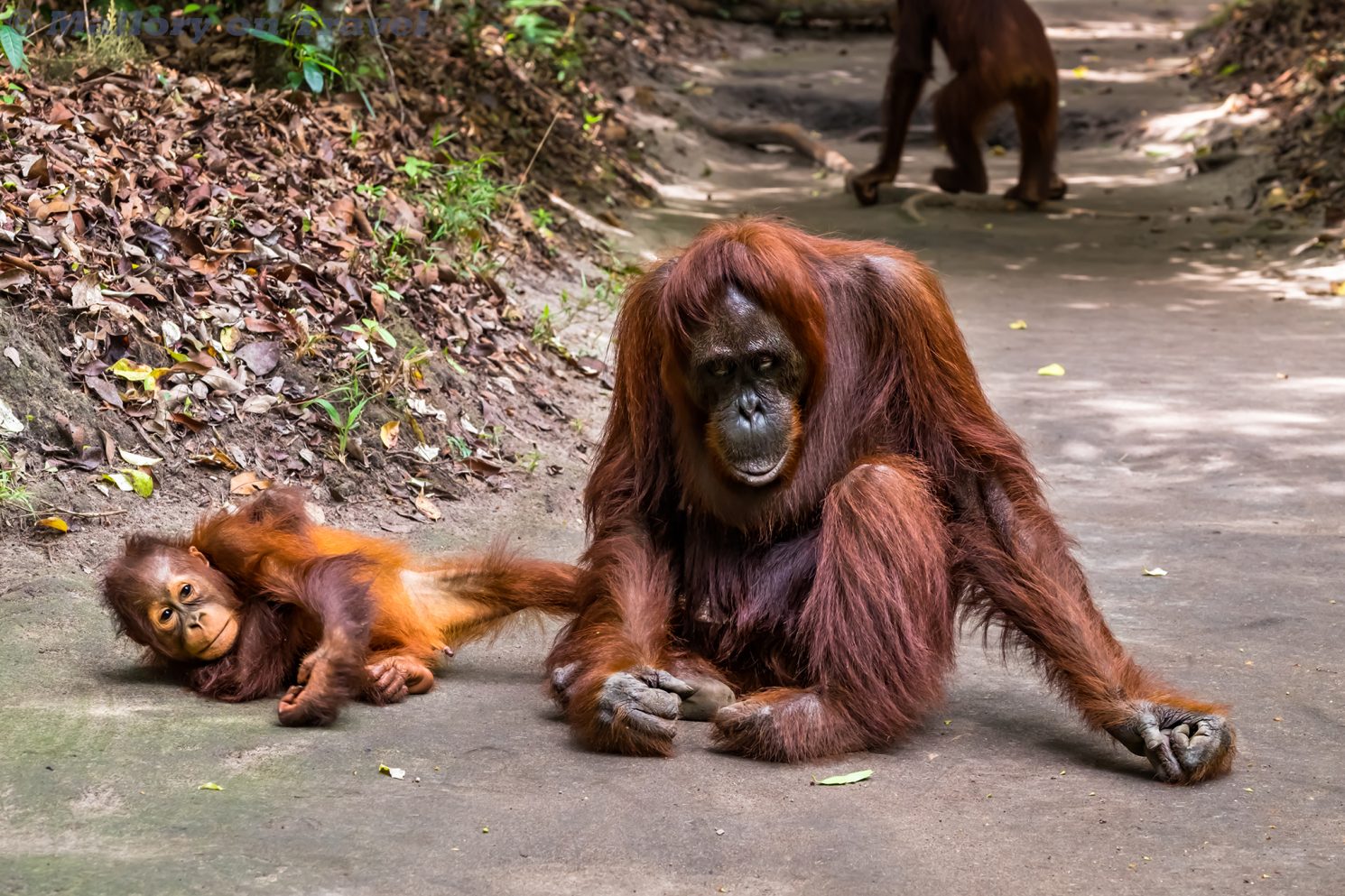 As the wooden ecoboat, known as a klotok chugged closer to the first station along the Sekonyer River in Tanjung Puting National Park, Kalimantan familiar emotions began to surface. Feelings of excitement, anticipation and elation began to well up at the prospect of coming face to face with orangutans here in the Indonesian forests of Borneo. 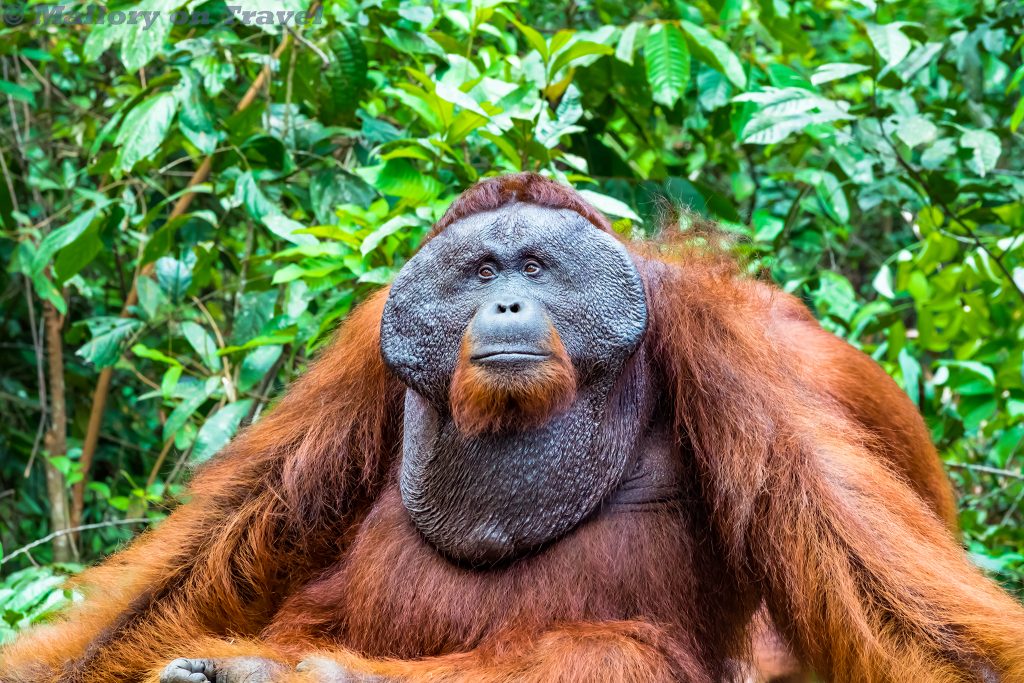 King of the swingers

Emotions I’m becoming more used to, but regardless of whether it’s with orangutans in Indonesia, wild guanaco (llama) in the Atacama or an Aruban whiptail it’s no less exciting. Wildlife encounters with all creatures great, and small enthrall me, thankfully it’s never become too familiar, and I’ve avoided becoming blasé about incredible and memorable moments.

This was slightly special however, an encounter with orangutans, one of the great apes and one of the planets most endangered species. Orangutan means ‘person of the forest’ and these powerful, but gentle creatures are some of our closest relatives, sharing around 96% of our DNA.

By the time we completed the short walk through the forest to the feeding platform at the first station, there was already a small crowd admiring the orangutans feasting on bananas. The gasps and hushed, but excited chatter from the onlookers, warned us that the apes were around, but there’s nothing that can prepare for that first glimpse! 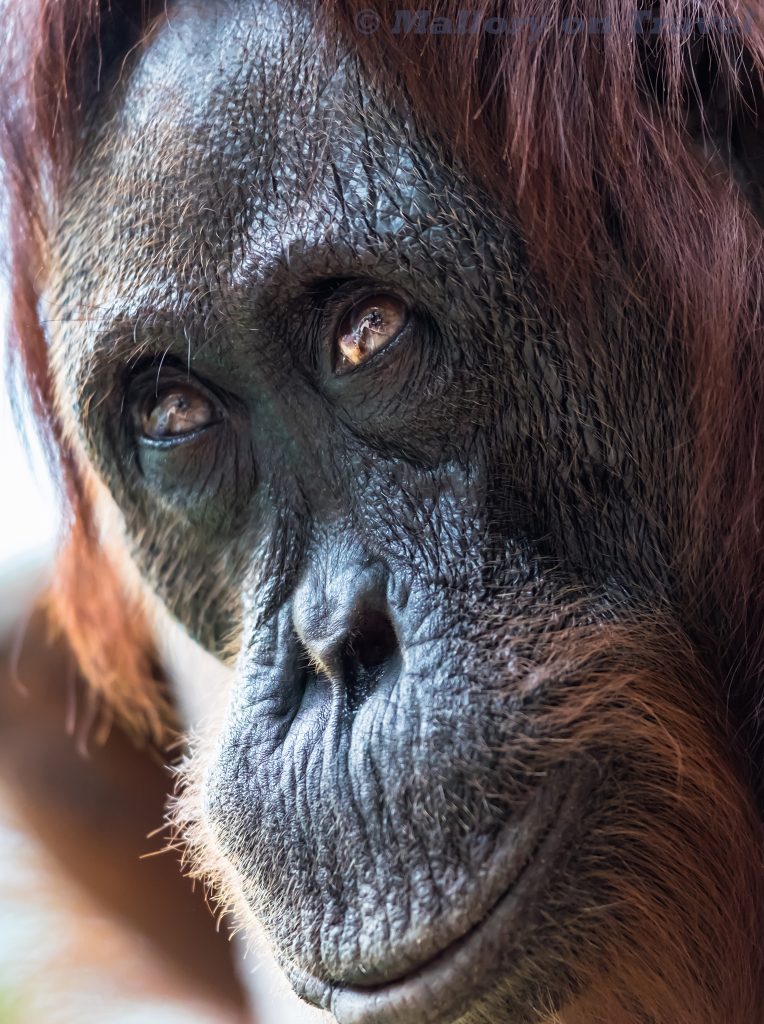 Arriving at the clearing, I looked up to be greeted by a female with young orangutan right above my head. Instantly exhaling sharply, as if all the breath had been knocked out of me, overwhelmed with excited elation, gulping rapidly in an attempt to catch my breath.

Catching a slight movement in the corner of my eye, I quickly became aware of two wiry, lumps of orange fur on the nearby feeding platform. A couple of juvenile orangutans were boisterously competing for the last remaining bananas, which the rangers had delivered earlier.

Further to the right, still another adolescent came into view, climbing out of the dense undergrowth and swinging onto the platform with the grace and power of an Olympic gymnast. The mother and especially the baby continued to draw further gasps, playing just above our heads, almost performing for the sake of the many cameras paying unwavering attention to their antics.

“This was worth travelling half way around the planet and several hours by boat on the river!” 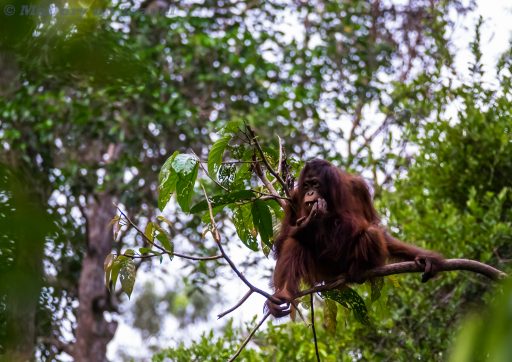 Keeping out of the way

Although this particular encounter came to an end all too soon, there were to be further chances to see these impressive great apes, including two wild orangutans feeding and climbing the trees which line the river. Our boat party watched in awe as one immensely powerful ape stripped huge fibrous leaves from a waterside plant, crashing through the undergrowth to escape once it realised we were present.


“If they weren’t so passive, their strength would be frightening; let’s just hope the fictional planet of the apes never becomes a reality!” 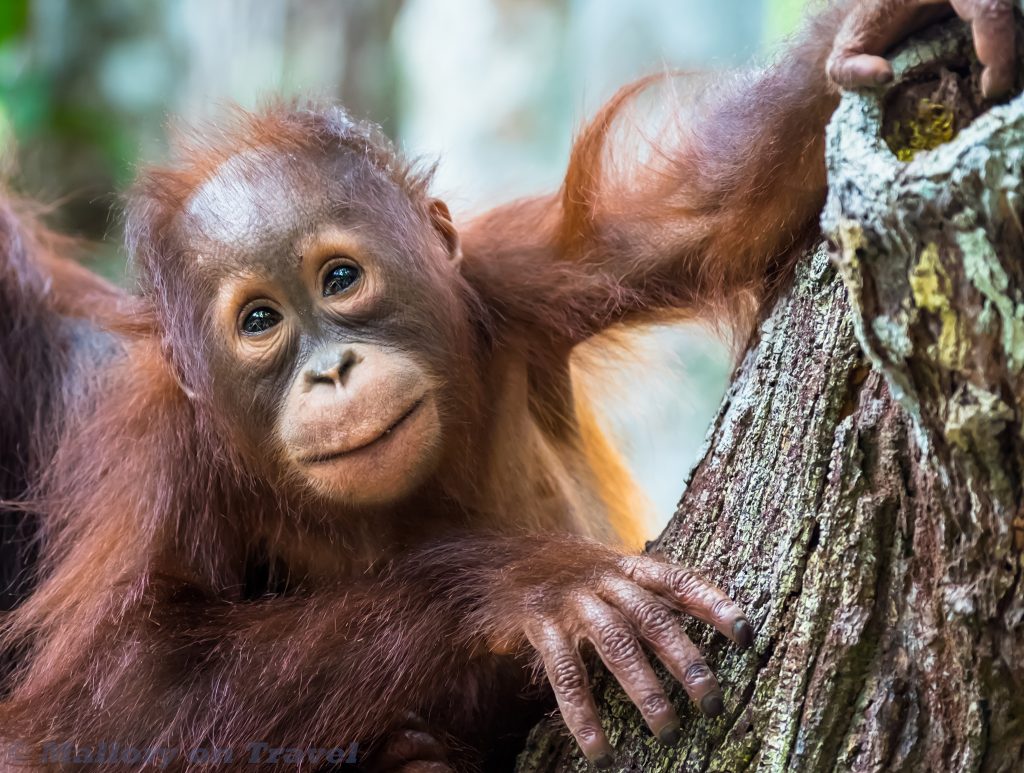 At the second stop, the power of an adult orangutan became still more clear; the ‘king of the swingers’ Dœyo, the local dominant male came to visit. Huge, muscular and probably around 100kg of raw arrogance, he was decidedly indifferent to our presence, lord of all he surveyed, languidly sitting upon the feeding platform, his wooden throne. It reminded me of an encounter with a silverback gorilla in Rwanda, which appeared equally aloof.

Read more about Rwandan gorillas here: Trekking for Gorillas in the Mist – Rwanda

Apart from a cheeky young ape who prowled and tumbled around the pile of bananas, most of the others had hurriedly grabbed a stash and retreated high into the nearby trees, hoping the king would soon have his fill and move on. Even a hopeful wild boar kept a respectful distance, nervously eyeing the pile of fruit and the formidable platform boss before disappearing back into the forest without so much as a morsel of ripe fruit. 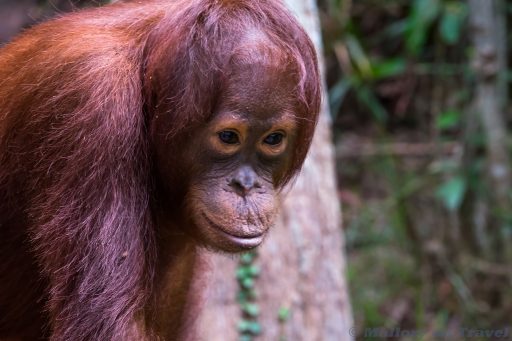 It isn’t just about the orangutans however, there is plenty of interest, a thriving culture of river use. Apart from the cooks cleaning their vegetables and plates in the back of other klotoks, the small boats of goldminers and fishermen stream up and down the slow moving strip of water.

Troops of proboscis monkeys clamber through the highest branches of the trees lining the river, the chance of sighting a kingfisher or hornbill ensure that most passengers keep a keen eye on the lower branches too. Crocodiles are difficult to spot, however, one boat was fortunate enough to catch sight of at least one during our voyage down the Sekonyer.

A lovely sunset, followed by a star filled sky provided a fitting end to the day. Without any light pollution the sky just lit up, the stars appearing gradually as if switched on by a time controlled remote, until even the Milky Way came into view, another chance to gasp.

Camp Leakey, named after the famed paleo-anthropologist Louis Leakey was the final stop on this journey along the Sekonyer River. Established in 1971 by Dr. Biruté Galdikas, who along with the equally legendary ape Jane Goodall and Dian Fossey was mentored by Dr Leakey the camp is now a research and welfare centre for rehabilitated ‘people of the forest’. 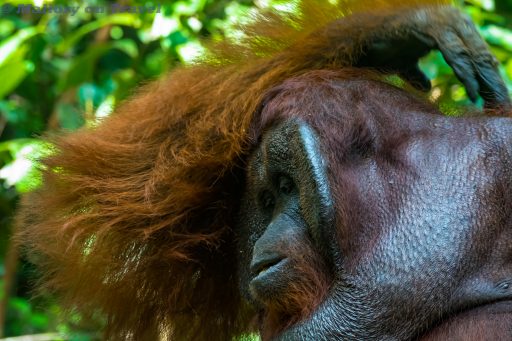 Is my deodorant still working?

There are ever present rangers to ensure visitors do not touch, get too close or unnecessarily interfere with the orangutans. However, the surprise at being met at the dock by a mother, infant and adolescent almost within touching distance had my heart racing once again. The excitement within the group of visitors was palpable, and a semi-polite scrummage ensued as everybody tried to get an even better view.

This small family group used the same raised wooden walkways and trails as us to eventually reach the feeding platform, the mother unceremoniously dragging and chastising her infant along to ensure they arrived in time. The apes appear to have an infallible internal clock, arriving punctually just as the first pile of bananas were tipped onto the platform.

After the unexpected greeting, feeding was almost an anti-climax, although a cheeky gibbon which swung in with admirable agility and sweeping up a handful of fruit before escaping with gymnastic ease provided some additional amusement and excitement. 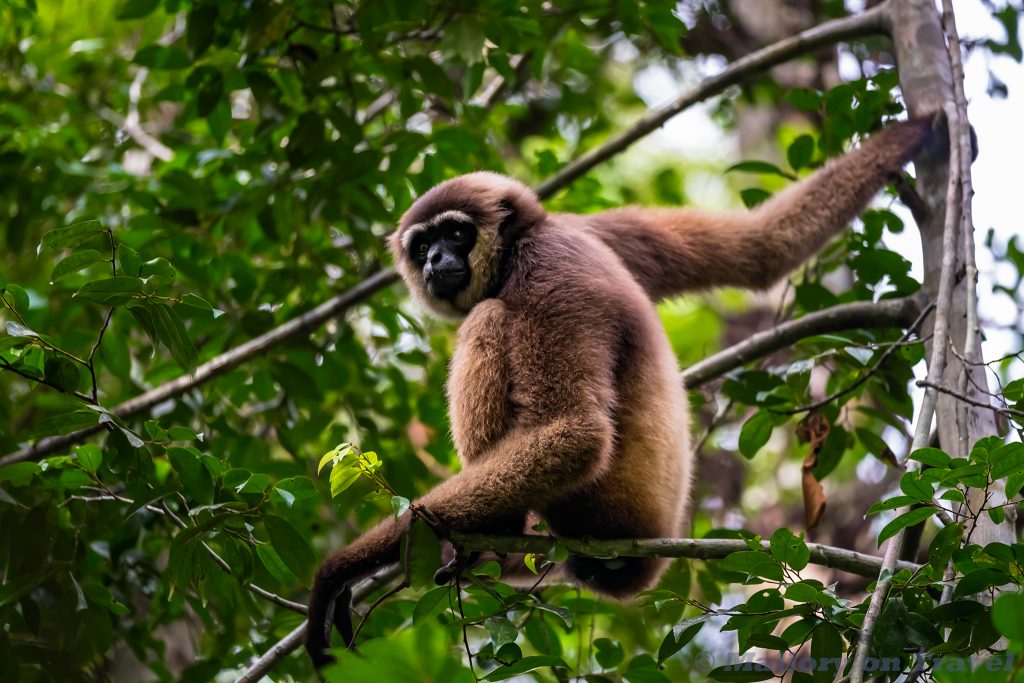 TOURISM AT A PRICE 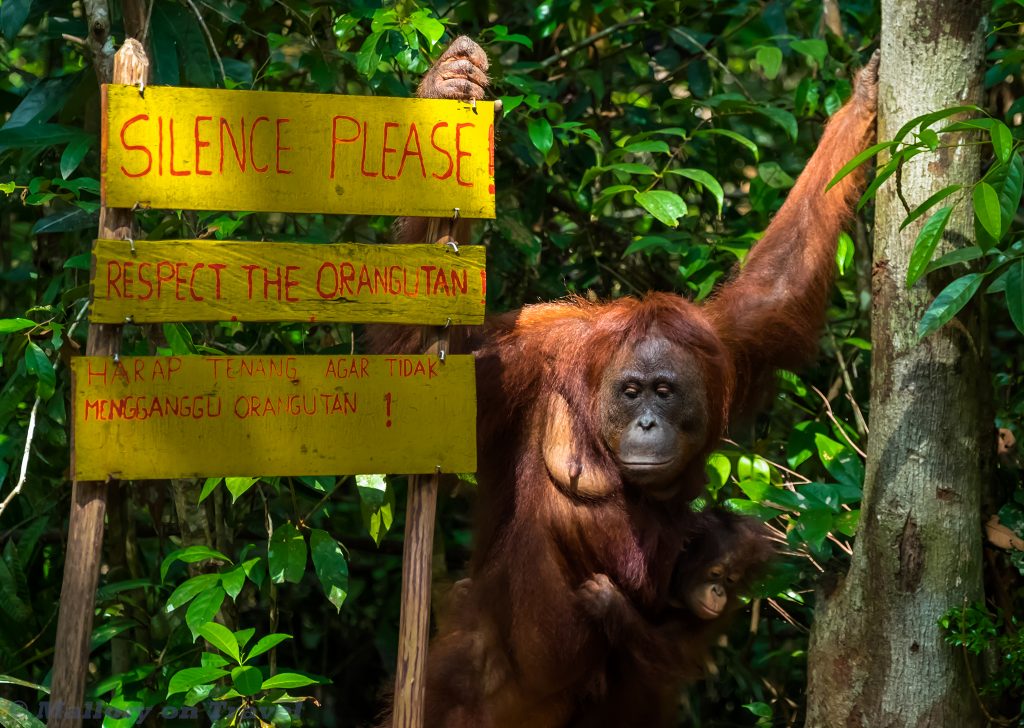 Respect where it’s due

Some may say these are ‘habituated orangutans’, part tame, a show for tourists and nothing like seeing orangutans in the wild, but let’s consider a few points:

Finally, the unmistakeable signs of excitement and emotion evoked in every single visitor to the camps on seeing our first orangutans are testament to how incredible an experience it is. The antics of the infants brought smiles and gasps, the proximity which we were afforded by the apes felt like a privilege and the power of the encounters shouldn’t be underestimated.

We did see wild orangutans too, and projects similar to the ones we visited will ensure that there are still some for others to see in future. 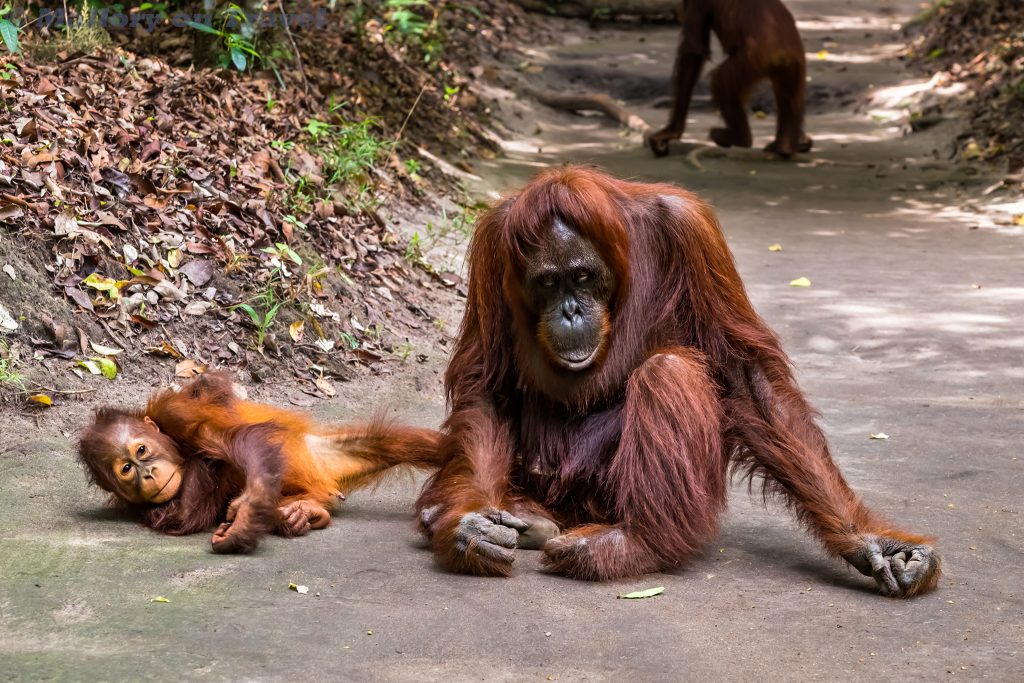