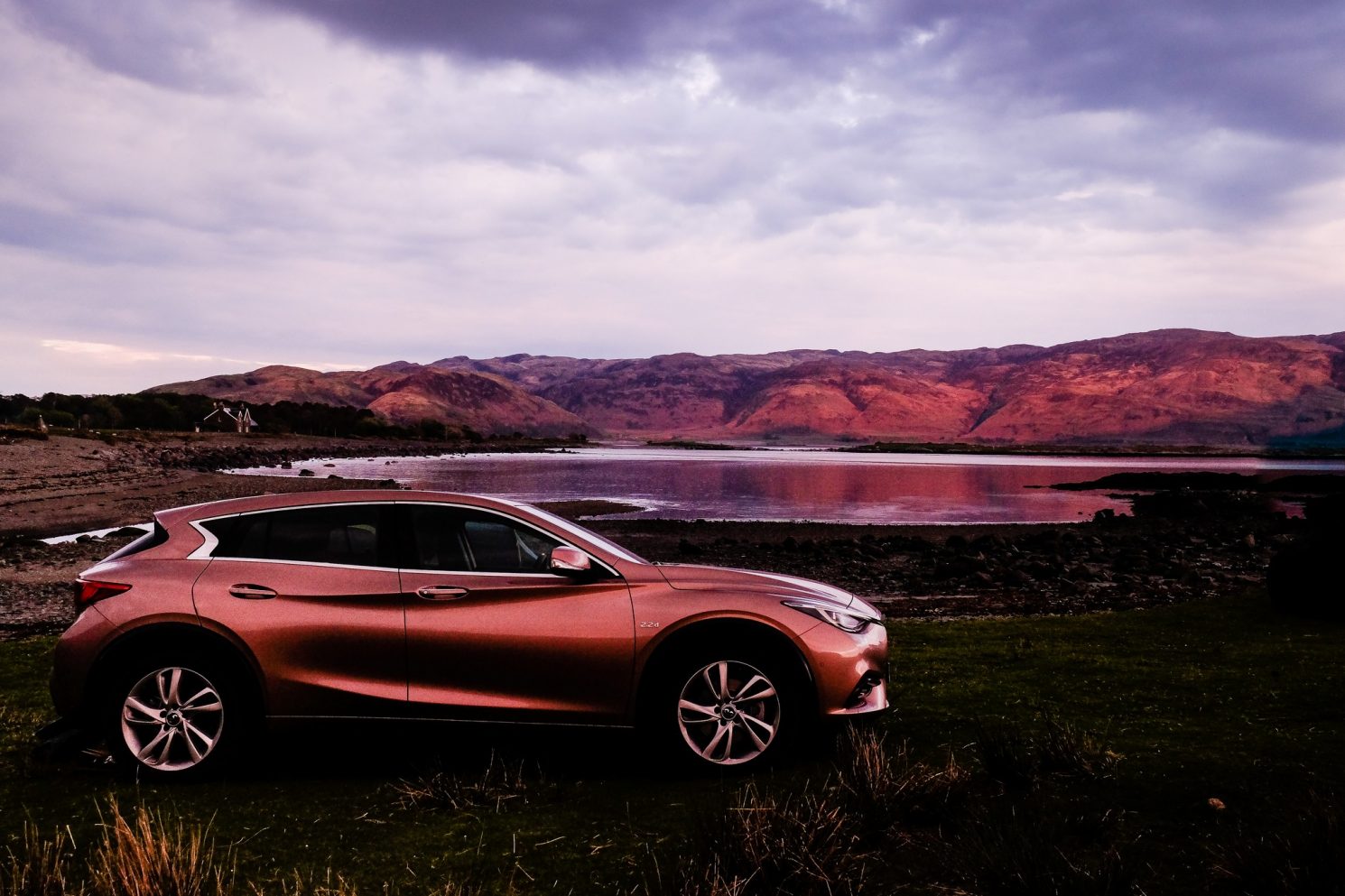 When I suggested a road trip round the Highlands and islands of Scotland in a convertible car, Iain raised an eyebrow slightly, grinned and said “Let’s do it….. less the convertible!”

Five months later and we were setting off up the M6, with an Infinity Q30 premium hatchback packed to the gunnels, (good call dropping the convertible) to one of my very favourite parts of the world. 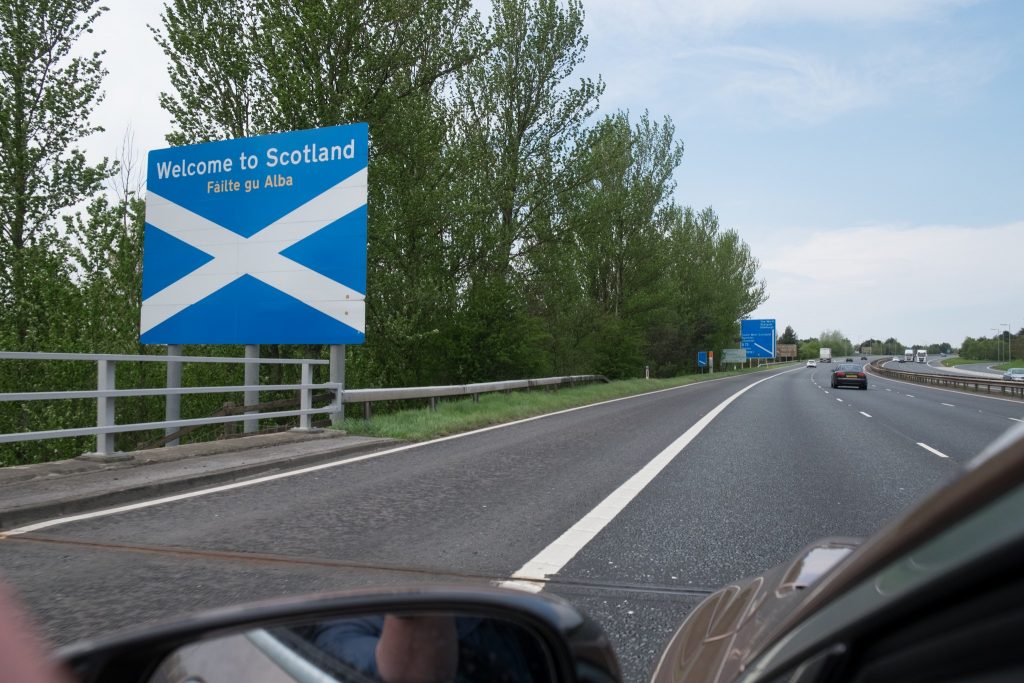 Scotland has much to offer, it has vibrant cities in Glasgow and Edinburgh and the lowlands of the Scottish Borders are a delight to walkers and cyclists alike. However, it is the Highlands and Islands that, for me, hold the real delights. The top end of Loch Lomond is where the smile really breaks out on my face.

The rolling, lowland hills become craggy, towering mountains, the lochs become numerous, deep blue pools in the landscape. Towns and villages full of character mark routes around the most engaging landscapes in Britain. The entrance to Glencoe, if encountered on a stormy day, is enough to make the hairs on the back of your neck stand up. The wildlife is abundant, the scenery spectacular and the driving an utter delight.

This promised to be a memorable road trip!

The planned route followed through Glasgow and north, branching off to Oban. From there we explored the island of Mull, back to the mainland and a ferry to Skye. Exploring Skye before returning to the mainland taking in Applecross and the Bealach na Ba. From there, the coastal route north through Ullapool before turning inland and north to hit the north coast at Tongue. Follow the coast to Thurso and the ferry to Orkney. Then another ferry to Shetland, returning to the mainland by boat to Aberdeen. Inland to Aviemore, down through Glencoe before returning home. Quite a route with some terrific coastal scenery and four major islands to explore. 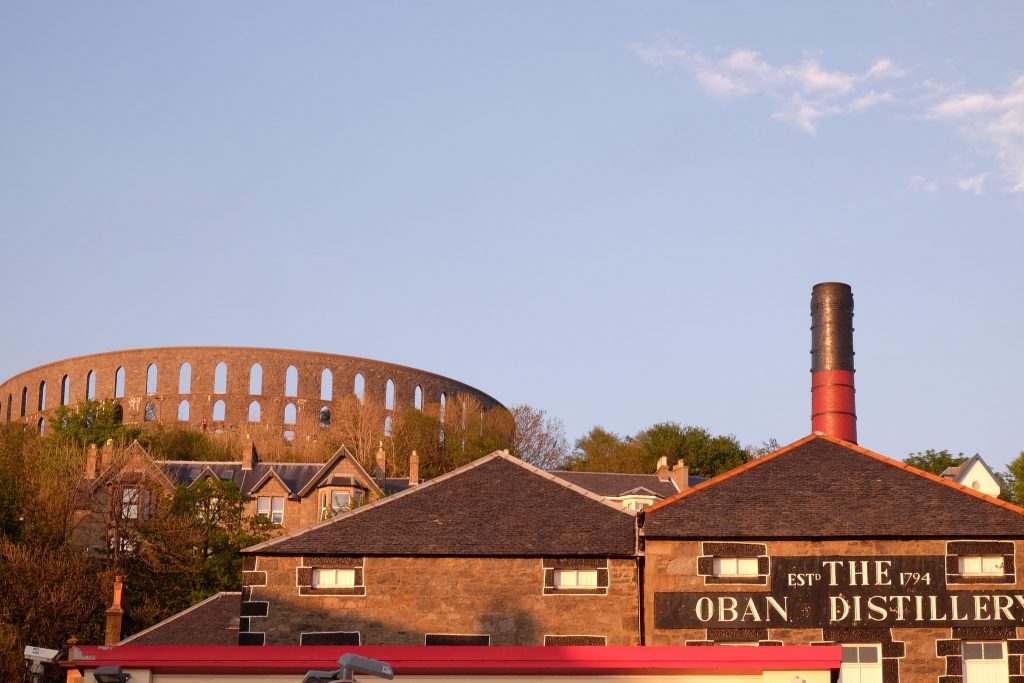 First stop though was Oban, a delightful little harbour town, where there are some seriously integrated transport solutions going on!

The railway station, bringing trains from Glasgow, is right next to the ferry terminal. It’s possible to literally get off the train and walk onto the ferry, enabling the islands to be easily explored on foot or by bike.

Oban is also the home of one of the first distilleries on our route and one of the best fish and chip shops around. Dinner on our first night in the Highlands, sorted!

While the fishing boats rested in the late evening sun, we headed off to put the tent up. The  first night would be spent under canvas. 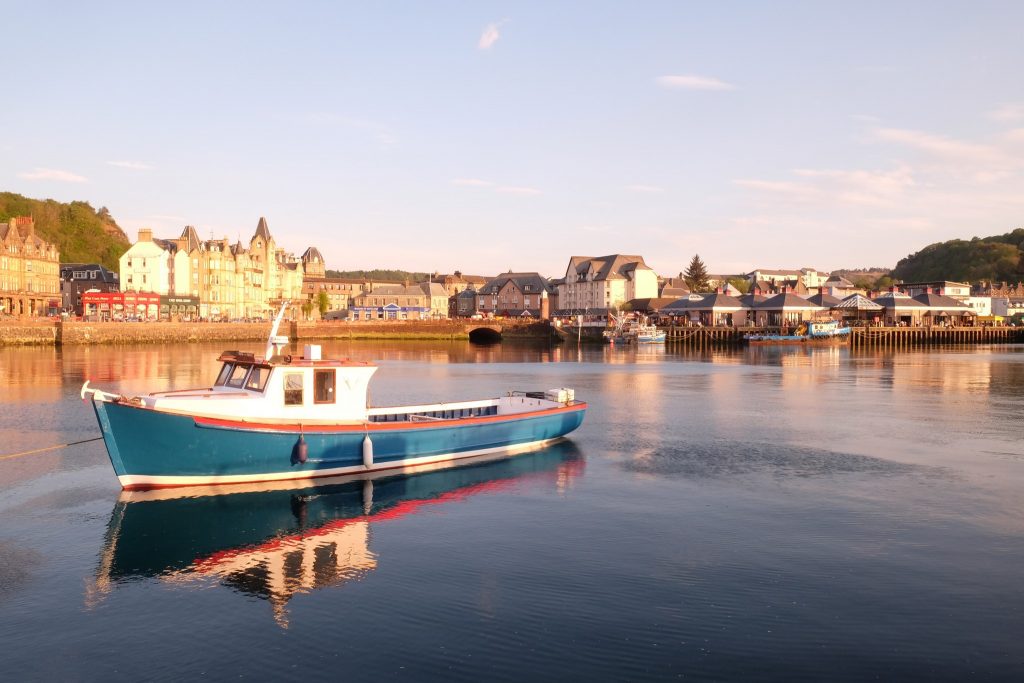 Morning saw an early start, packing the camping gear away to catch the ferry to the Isle of Mull. The famous sea eagles on Mull were a must see, especially in the company of a knowledgeable RSPB ranger. The nest is a distance away from the viewing station, for obvious reasons, so it is very much a case of scope or binocular viewing. Too far for photography, with the exception of those sporting bazooka sized lenses.

Alas, no photographs, but the preservation of the nest site is obviously the priority, so we hunkered down with the RSPB spotting scopes and thoroughly enjoyed a couple of hours of watching the eagles. Fingal hunting, while Iona took care of the newly hatched chicks.

Our campsite for the night was at Lochbuie. Scottish law allows free access for wild camping, meaning camping is permitted anywhere that is not obviously owned land. However, consideration is necessary and clearing up essential, leaving no trace of the overnight stay.

The estate owners of Lochbuie are very generous, having set aside a small area where camping is encouraged to prevent damage to the fragile grasslands found in the area. It would be churlish to not cooperate with such a request and so we made our way to the beach and set up camp on the grass with the door of the tent facing straight out across the water. 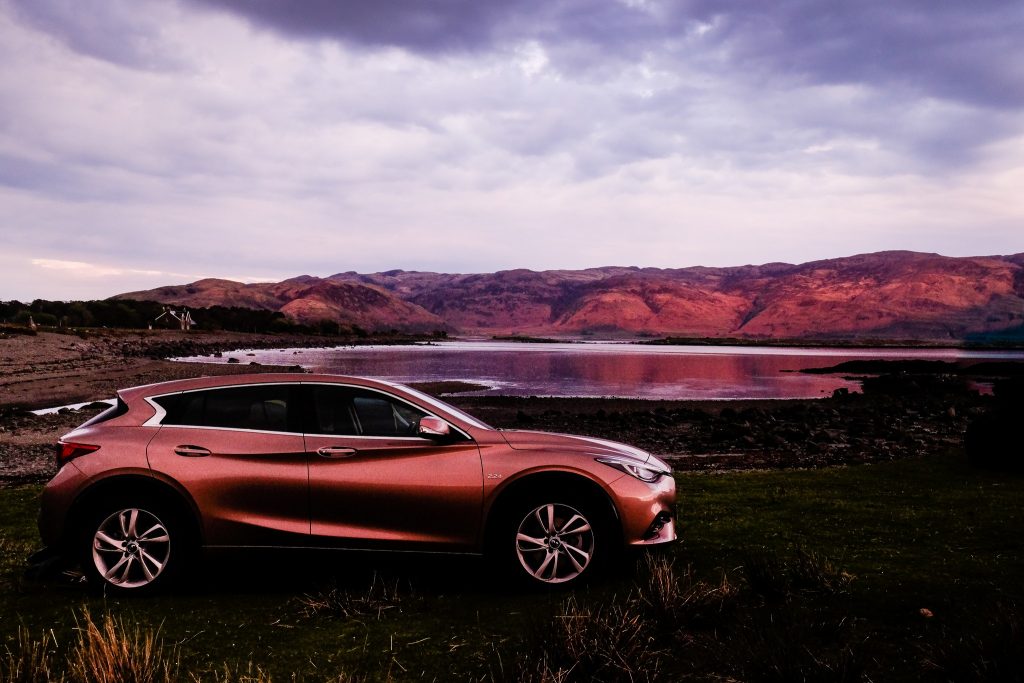 The sun dipped below a cloud layer before setting behind the hills and these colours are the result. The hillside lit up crimson, while dinner cooked on a barbecue on the beach. Does it get any better than this? We settled down in the tent for a good night’s sleep quite delighted with the start to our trip….. we saw eagles after all! 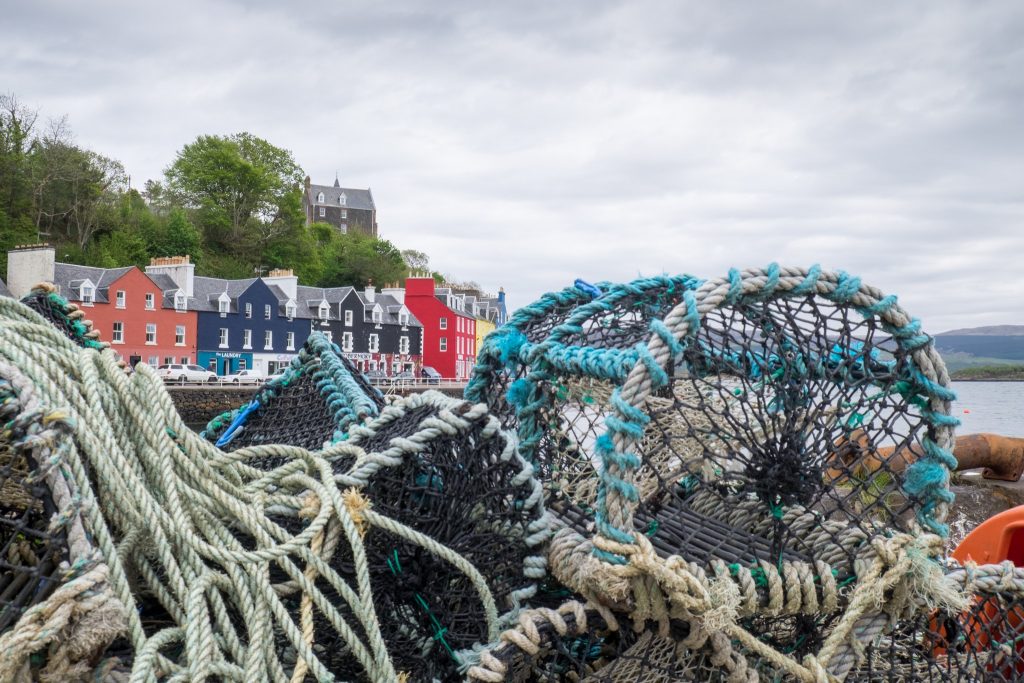 The next day dawned cloudy but we got the tent down in the dry and headed off to Tobermory, the location for the children’s series called Balamory. With quaint painted shops along the front it’s a very distinctive harbour town.

Driving around Mull, it was a pleasant surprise to come across these much photographed abandoned fishing boats. Once someone’s pride and joy, yet still, photogenic and strangely beautiful. 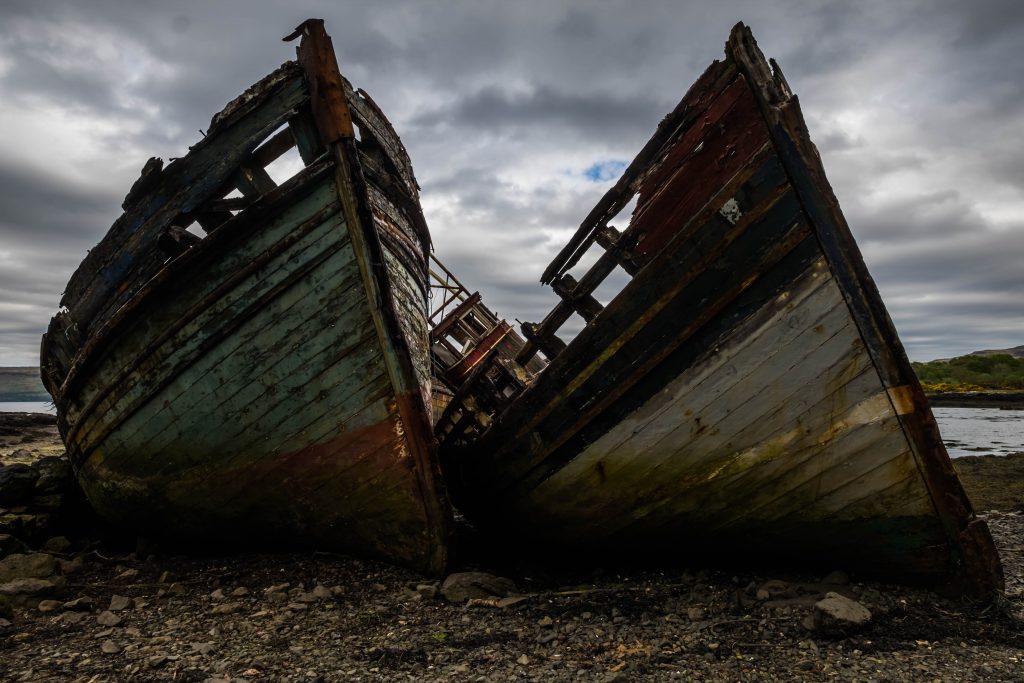 Catching the late afternoon ferry from Fishnish to Lochaline took us back to the mainland and heading to Strontian. This was the planned camping site for the night, but when we arrived the luxury camping pods called our names. 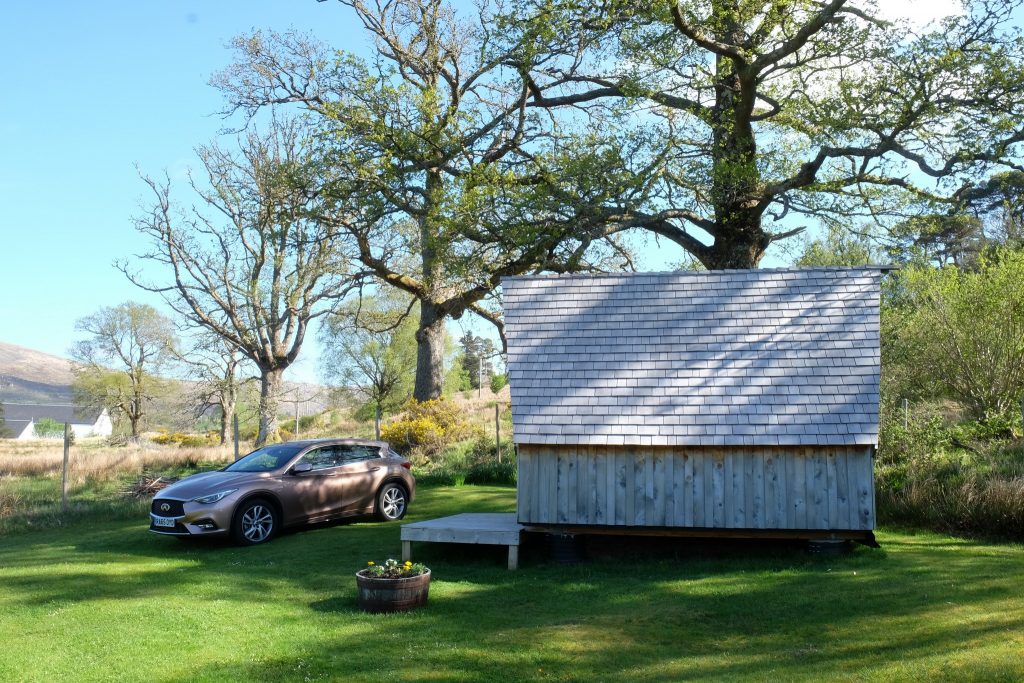 Dinner was home cooked paella, made on a camping stove outside the pod and an evening was spent stalking otters and grabbing some lovely sunset shots as the sun went down.

Otter stalking was to be an unsuccessful theme of the trip, although we had seen two at distance on Mull. 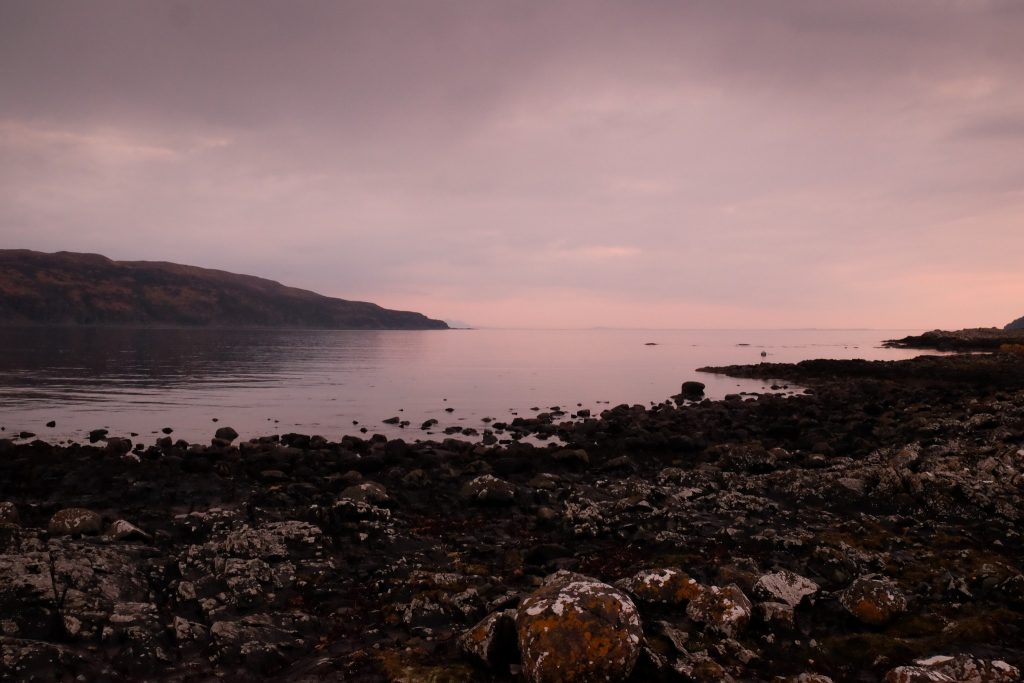 The amazing thing is though, the scenery was just starting to get seriously special, and tomorrow we were going sea kayaking.

Arisaig Sea Kayak Centre very kindly hosted us for a paddle around the skerries off the Ardnamurchan Peninsula. It is, without doubt one of the best ways to appreciate the clear waters and stunning scenery around the West Coast of Scotland.

It also provided an unaccustomed view of the impressive Black Cuillin of Skye, the next stage of the road trip adventure.