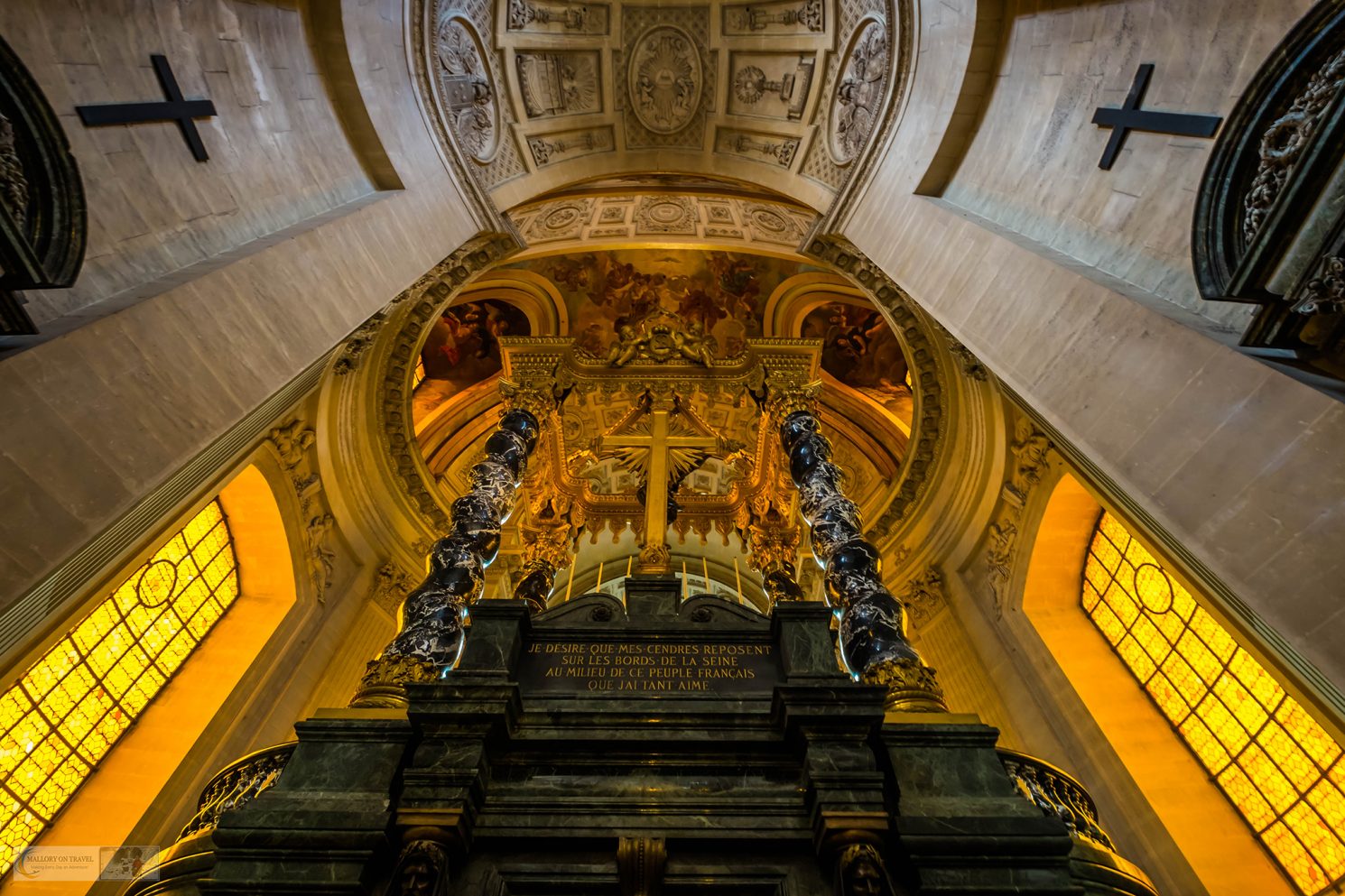 Stuck for something to do on a rainy day in Paris? The Musée de l’Armée Les Invalides may have the answer; Napoleon in St Helena. Conquering Memory. A fascinating exhibition detailing the last days of Napoleon, while in exile on remote St Helena.

In fact, for those that have run out of museums to visit in London, it’s even a viable option for a day trip from the capital. This is exactly what our group did, catching an early Eurostar to Paris, a good look around the museum, including Napoleon’s tomb, followed by lunch, a browse of the exhibition and back in time for a fish and chip supper. It’s remarkable to consider it’s possible to travel in comfort, reading, or getting some work done while travelling to Paris. 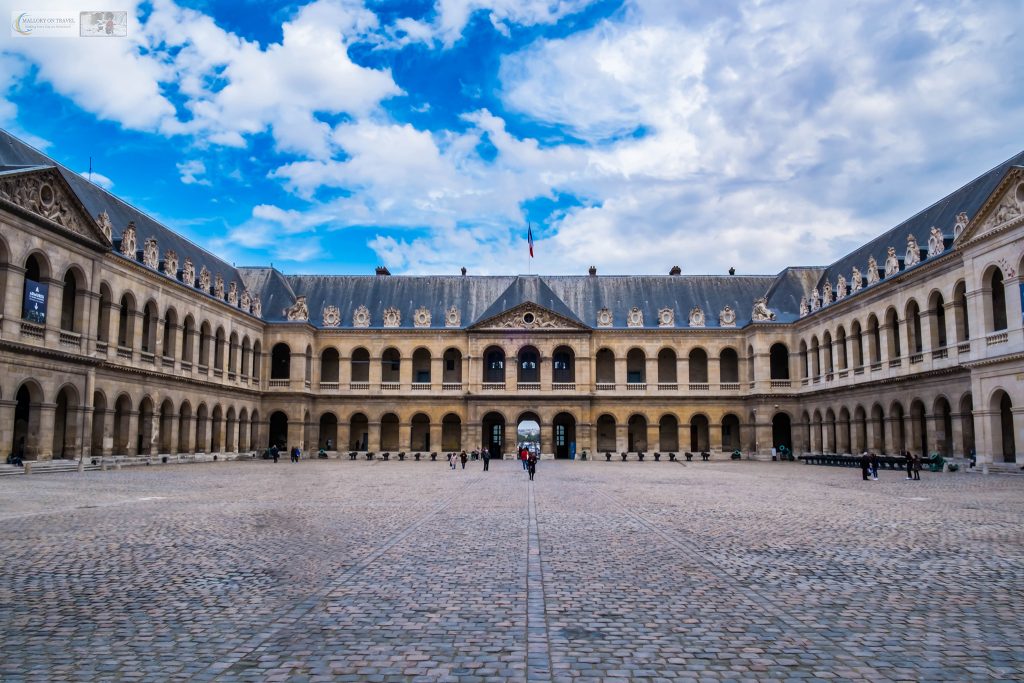 The museum has been loaned a number of genuine articles from Longwood House for the purposes of the exhibition. I was pleasantly surprised to be reunited with honorary French consul of St Helena and museum director Michel Dancoisne-Martineau. This gentleman is passionate about the history of Napoleon in exile, has almost singlehandedly been responsible for the preservation of his residence and had been my tour guide when I visited in 2014. 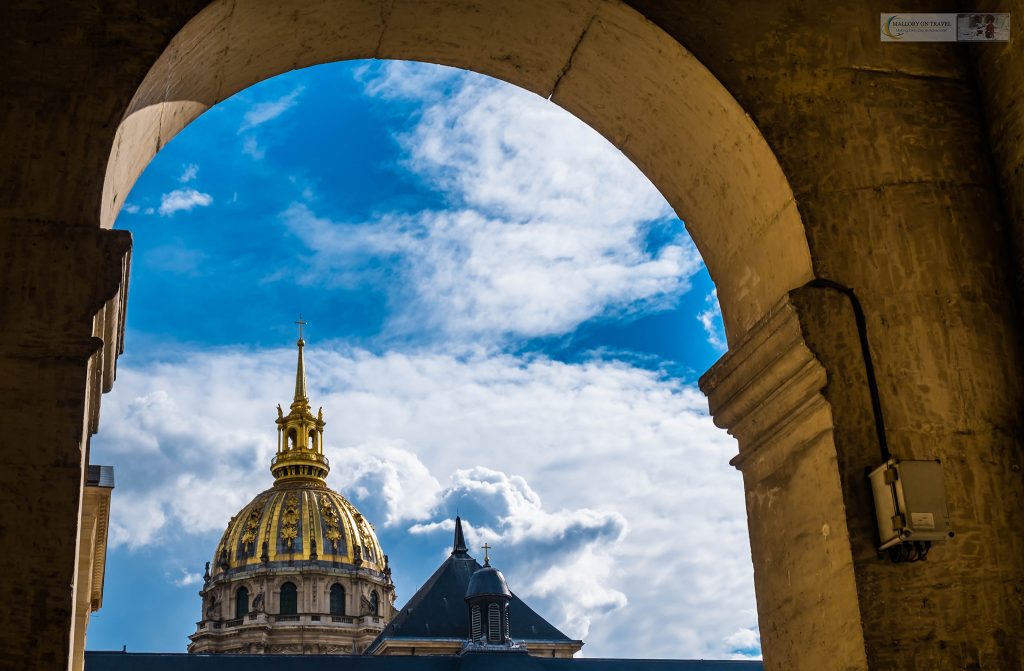 Read about my visit to St Helena: St Helena; Journeying to a remote South Atlantic Island

He has spent most of his years on the island researching, discovering and retrieving most of the objects on display. Most had been auctioned off after Napoleon’s death, were distributed around the island, needing recovery, many discovered in the attics or wills of “Saints”. 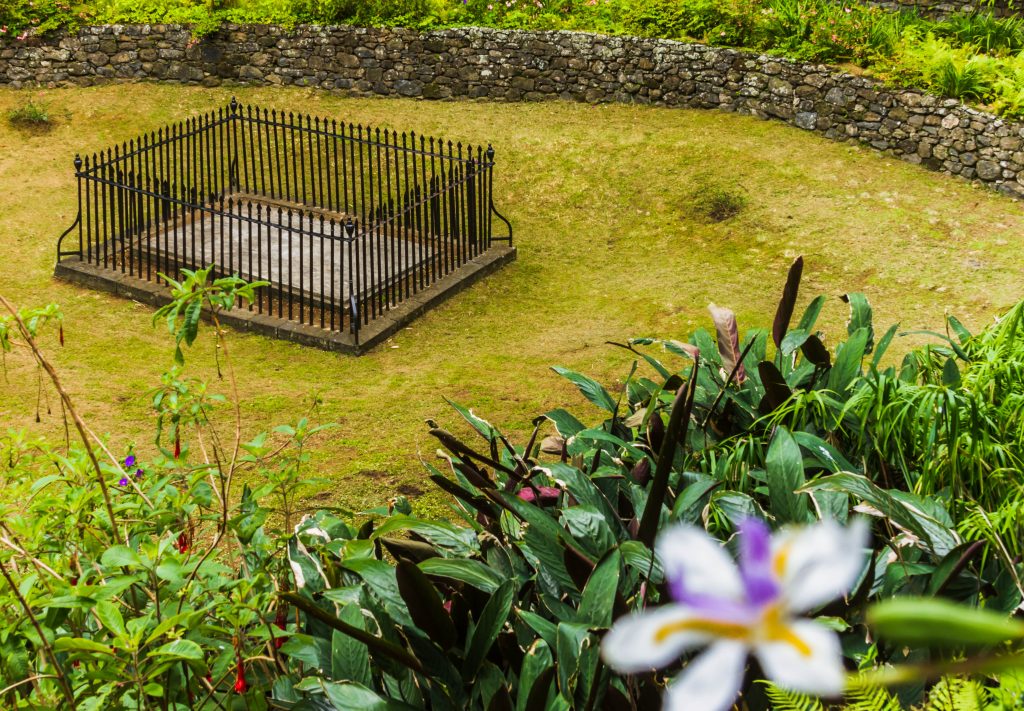 It was a great pleasure to meet him again and I was delighted to discover he would be our guide for the exhibition.

Stepping through the entrance doors, it was also pleasing to see that the exhibition was already proving popular, with several tour groups, families with young children, couples and single visitors browsing the various artifacts on display. 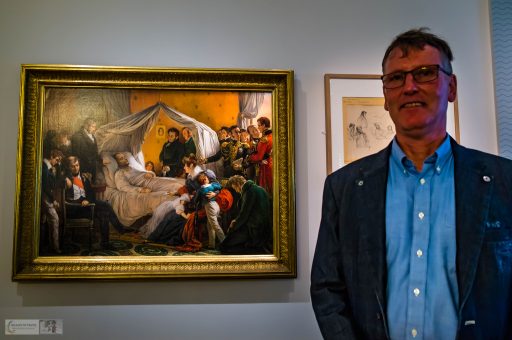 Michel Dancoisne-Martineau and the Death of Napoleon

A small screen immediately caught my eye however, there was a short video introducing the island to the uninitiated and despite Michel beginning to explain some of the most important pieces I was distracted. Having visited the remote South Atlantic island, it was great to see some of the recognisable landmarks and attractions.

We were soon mingling with the other visitors, enjoying the knowledgeable narrative of Michel, having probably the world’s premier expert on Napoleon’s exile to ourselves certainly added to the experience.

The numerous artifacts and paintings straight from Longwood House provide a fascinating insight into the character of “Boney” as he was apparently known by the young Betsy Balcombe, he befriended on St Helena.

From his plain, military camp cot which was his regular bed to the ornate silver cutlery and amazingly detailed china crockery, it seems Napoleon was a complex man. His pride, even arrogance is almost legendary, but although he obviously enjoyed some luxury items, he was also prepared to accept a simple life. It is also known he was popular with his men, and not just his trusted officers but the rank and file, often mixing with his men. 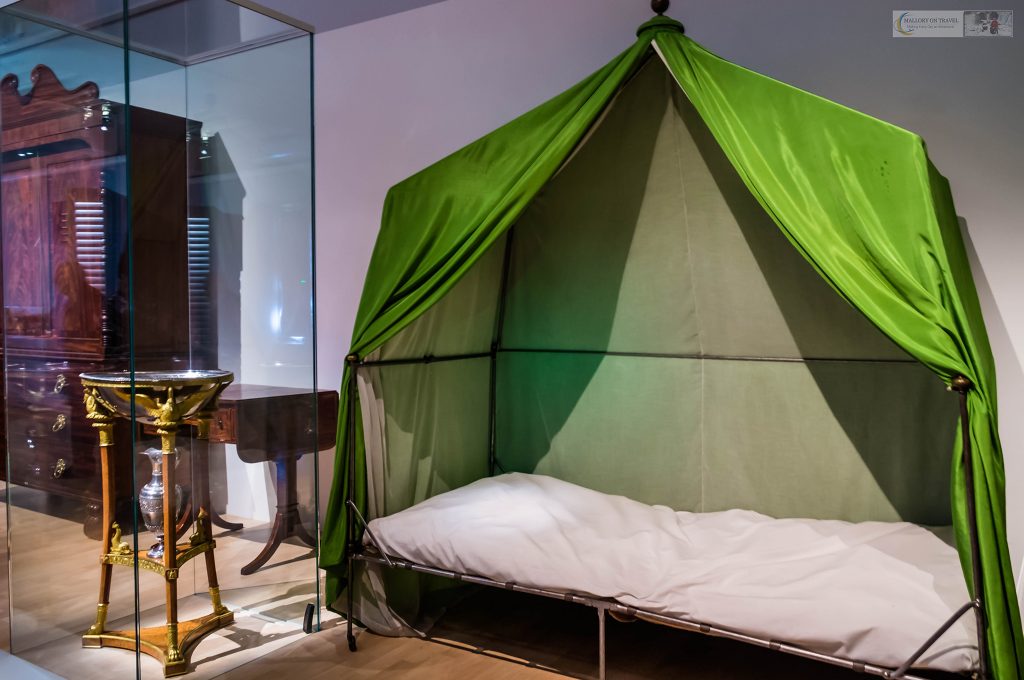 Michel explained his fractious relationship with the British government and the governor of St Helena. In Britain even after losing the Battle of Waterloo in June 1815, and eventually surrendering to the British in July of the same year, the public was fascinated by the “Little Corporal“. In 1815 his status was similar to modern day pop celebrities, and this concerned the government, deciding to exile him as far from the public view as possible; the other side of the world, St Helena.

This required some hurriedly made decisions and changes. This included temporary accommodation and eventually, an agreement to build a new more permanent residence to house Napoleon and his entourage. Throughout his stay, he remained at odds with the governor, who even had his doctor removed when he suggested Napoleon was in ill health. The judgement of his replacement was also questioned when declaring him dead, and verification was required before his death was eventually accepted. 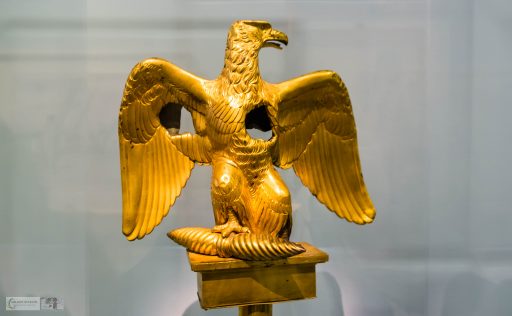 Michel finished his explanation, leaving us time to browse and discover the exhibition for ourselves. There are plenty of intriguing items on display, including several articles of Napoleon’s iconic uniform and hat (which emphasises his need for simplicity).

However, it is the paintings which seemed to capture the imagination of most visitors. Powerful works of art, such as the deathbed of Napoleon, another of him rising Christ like in resurrection. Yet another portrays some of the public fascination of the time. Showing hordes of fascinated tourists being towed out on a flotilla of small craft to witness Boney on the deck of HMS Bellerophon in Plymouth harbour.

A famous French eagle, the standard of the Napoleonic armies is also on display, drilled with holes, caused by the rounds fired from British muskets was a particularly poignant artifact.

There is apparently a rise in interest for Napoleon, and even Bonapartism, so the exhibition should continue to prove popular. It is also timely for St Helena, with the opening of its new airport this year hoping to attract more visitors. The exhibition should also fuel interest in the island and put it on the map for those interested in the history of the Little Corporal.

It was a great day out in Paris, and even a great excursion from London, but soon it was time to wish Michel well with the remaining time of the exhibition and head back to the station to catch our Eurostar home. Fish and ships anyone? 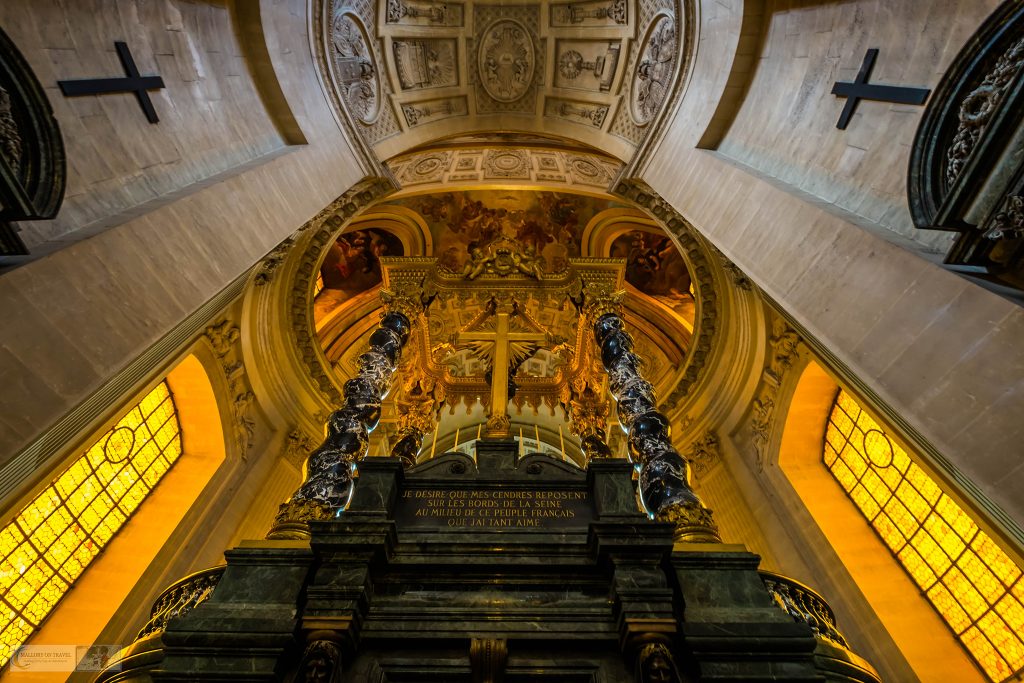