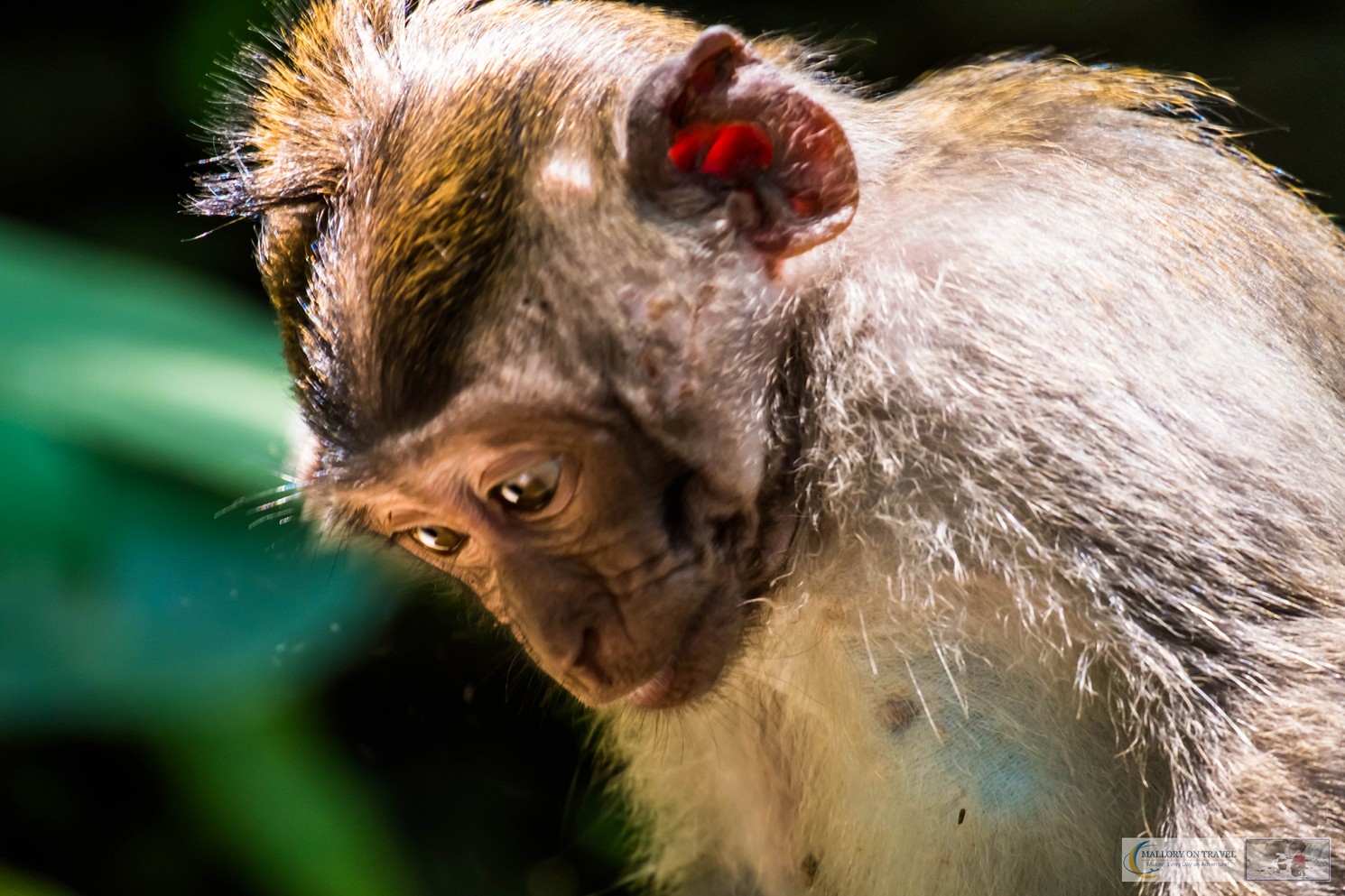 If you’d never had the pleasure of meeting with a troop of monkeys, perhaps seen the odd television programme and were looking through these images, you might be excused for thinking they’re cute. A few other words might spring to mind, curious, playful, maybe even endearing. Those that have visited places like the Sacred Monkey Forest Sanctuary in Ubud, Bali know a better description ….. hoodlums. 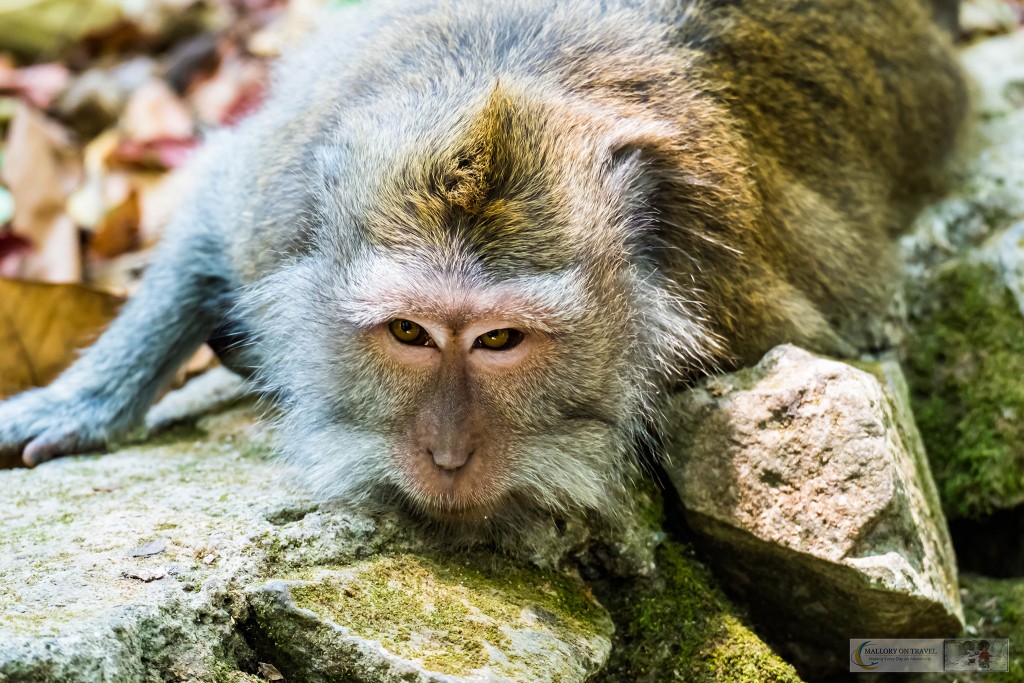 Watching, waiting and waiting to pounce

There are few creatures which can cause mischief like a troop of monkeys. They genuinely seem to enjoy tormenting each other and when they get bored of that, they often turn their attention to the visitors. 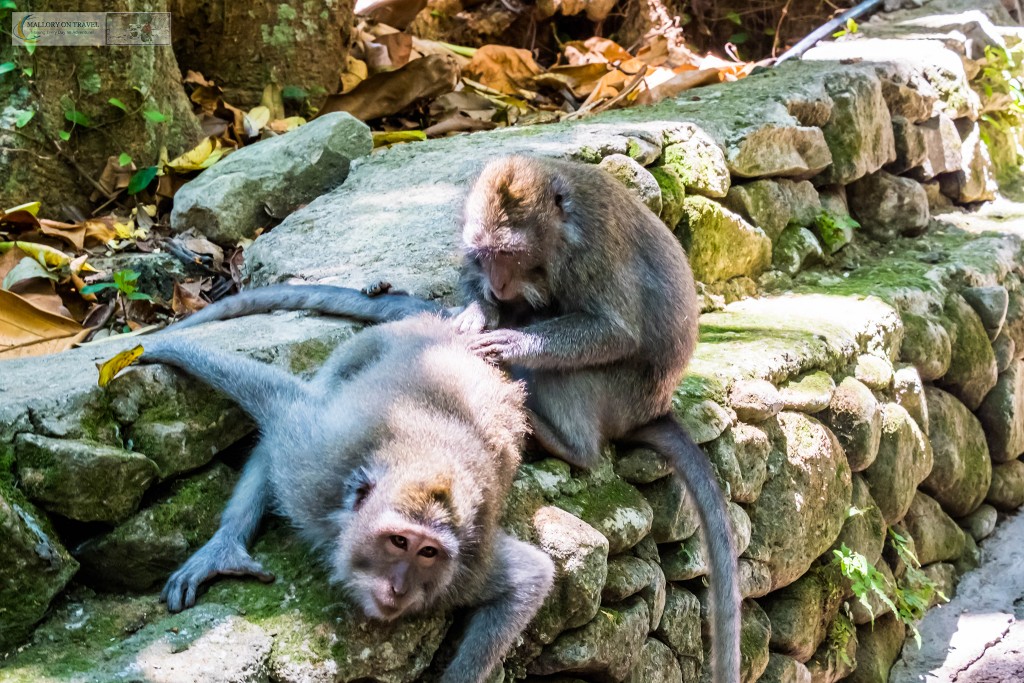 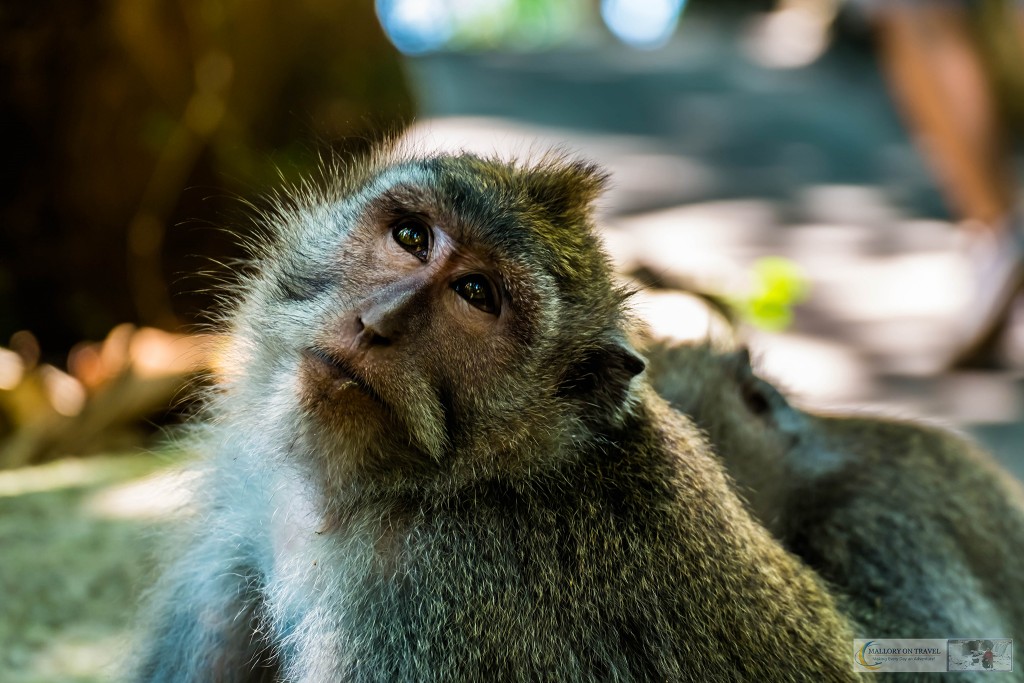 Attractions such as the Monkey Forest include warnings; take care feeding the monkeys, leave bags behind at reception, do not carry or wear anything loose. Trust me, it’s good advice; if it isn’t tied, fastened, locked or nailed down monkeys will get into it, exploring, even stealing and may get aggressive if foiled.

In the case of monkey encounters, resistance is futile! 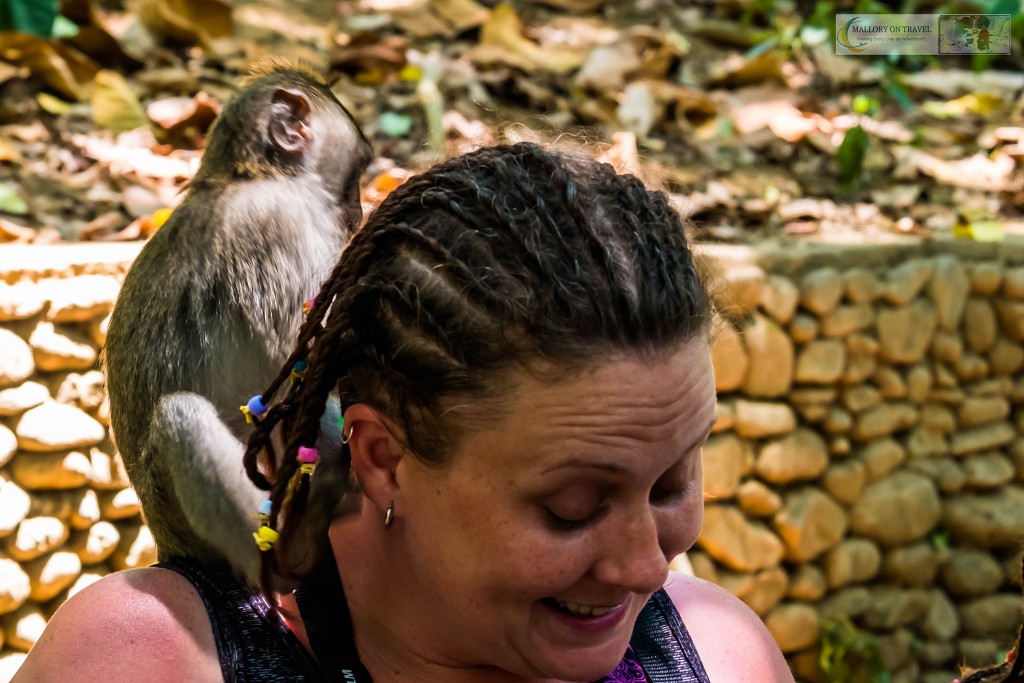 What style can I do for you today?

They are of course also extremely entertaining, whether chasing each other around, fighting over scraps of food or their funny, often hilarious interactions with the visitors. Climbing on the shoulders of groups of girls, attempting to undo their braids or crowding around their feet bewitched by their multi-coloured sandals.

Read about an encounter with contrasting primates: Trekking for Gorillas in the Mist – Rwanda 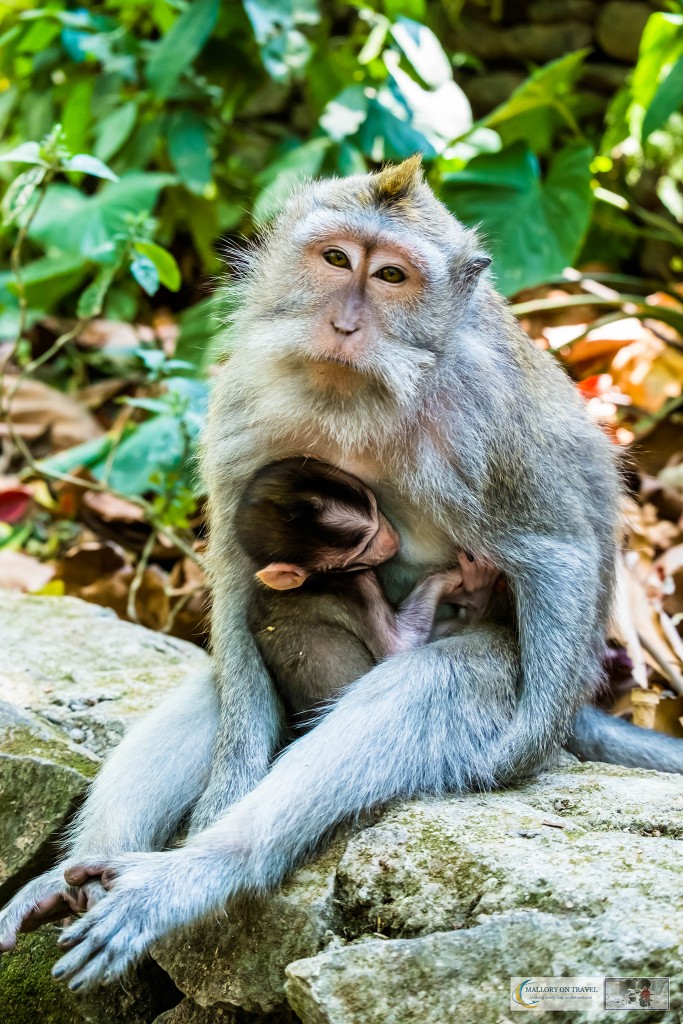 It’s tough being a mum

The funniest moments usually involved feeding these hoodlums, the generous visitor gingerly holding out a piece of banana only to have this gang of bandits fight among themselves before banding together to intimidate the titbit loose. Often they make a bid for the whole bag, causing the terrified tourist to drop the coveted stash like a live grenade, jump backwards and stumble away like an extra in “The Walking Dead”. Almost before the bag hits the ground the hoodlums are squabbling among themselves, there’s no love among monkey thieves.

There was one especially menacing looking bruiser, his mugshot really wouldn’t have looked out of place in “Bali’s Most Wanted” or maybe “Crimewatch Bali”. I’m not sure if he was the troop alpha male, but he was certainly top guy of the group around me, no monkey attempted to wrestle his swag from his grasp. He had a soft side however, passing some of his banana to the youngest, smallest member of the troop. 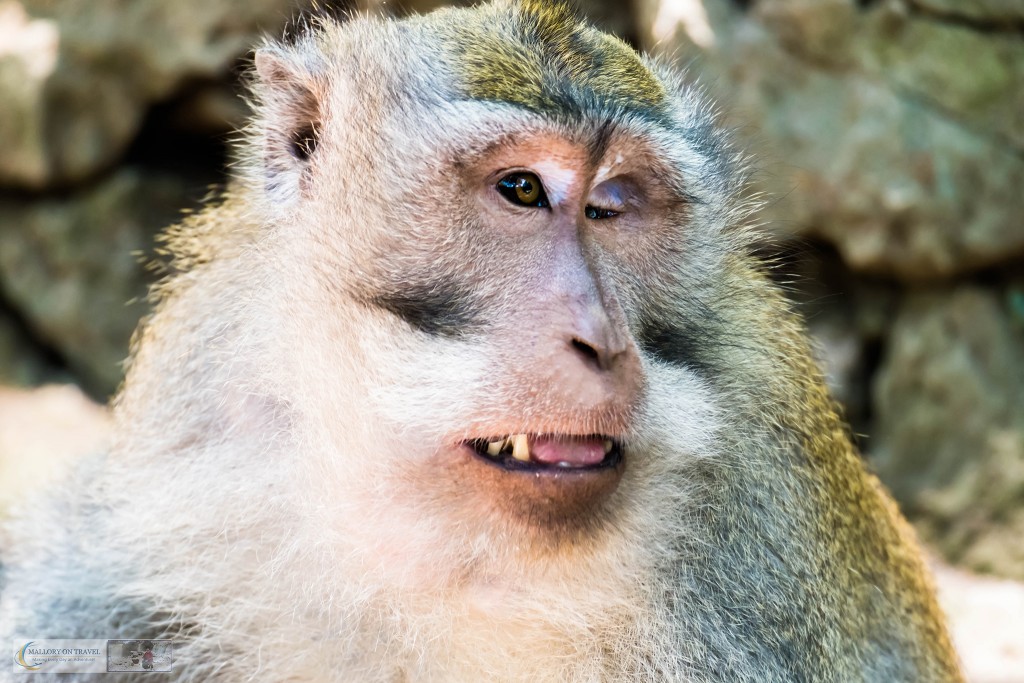 Mugshot only a mother could love

Their mischievous nature is a direct result of their intelligence. Smart and curious, putting these traits to good use whenever an unsuspecting tourist crosses their path. A young guy wandering through engrossed in texts or social media on his phone, was quickly surrounded by a small army of monkeys, reminding me of the scene from Jurassic Park II where one of the bad guys is attacked by a squad of tiny dinosaurs. Fortunately, he wasn’t attacked, but his face when he looked up was a picture and probably broke the world standing high jump record in his surprise.

Read about my unfortunate meeting with a baboon: Baboons on Crimestoppers in The Gambia

Monkeys are also the great entertainers of the animal world, strolling around in gangs like bored delinquents just itching for trouble. They remind me of groups of young teenagers that hang around on street corners waiting for something to happen, except monkeys usually make something happen.

The young ones are especially fun to watch, playing chase, fighting among themselves, mimicking the older troop members and coercing some food or affection from them. 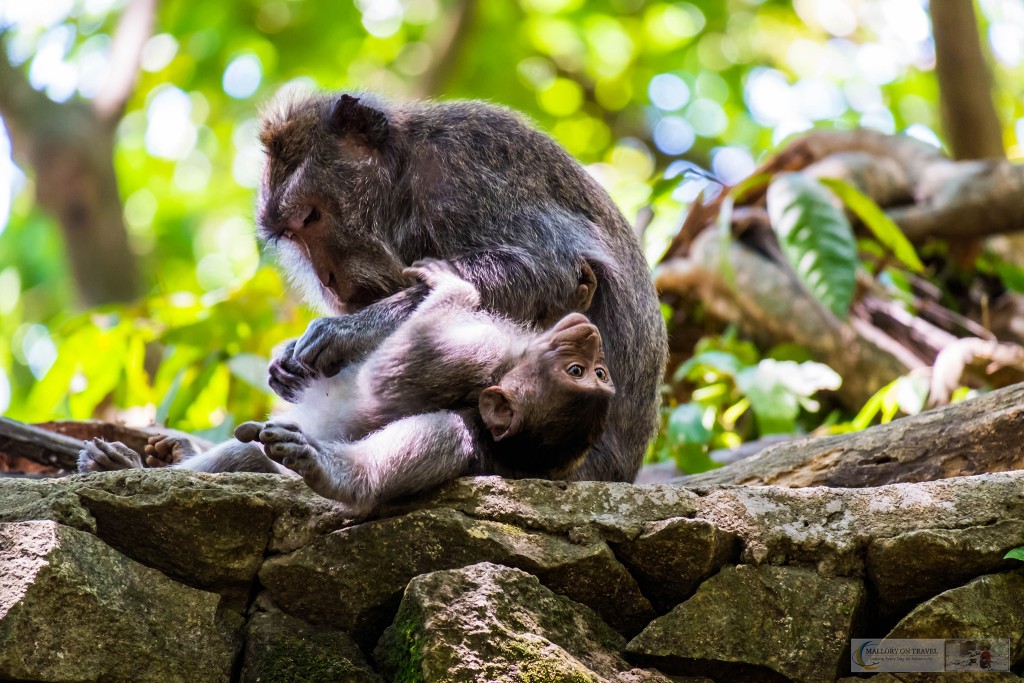 It often works too, as even the males can be quite tender, and the females seem to make great parents. They look after and protect their young ones from the most boisterous, hard playing teenagers. Comforting, reassuring and providing a safe haven when required. 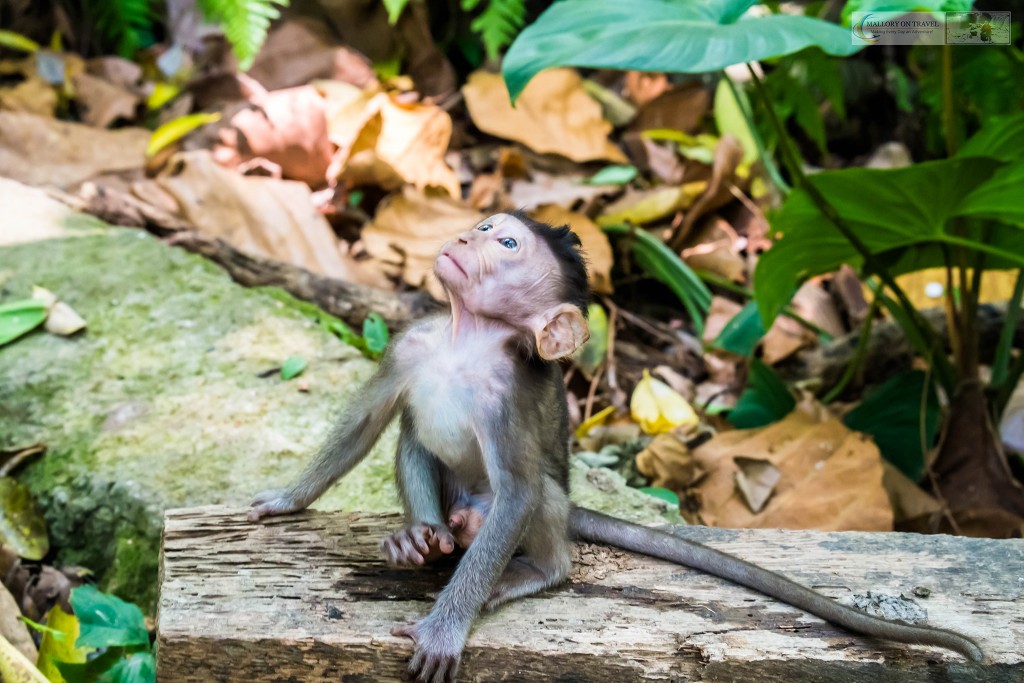 Ubud Monkey Forest (known as Mandala Suci Wenara Wana in Balinese) is a popular attraction and also a Hindu Temple. It is part of the village of Padangtegal, the villagers owning it, considering it to be of economic, spiritual, conservation and educational significance. 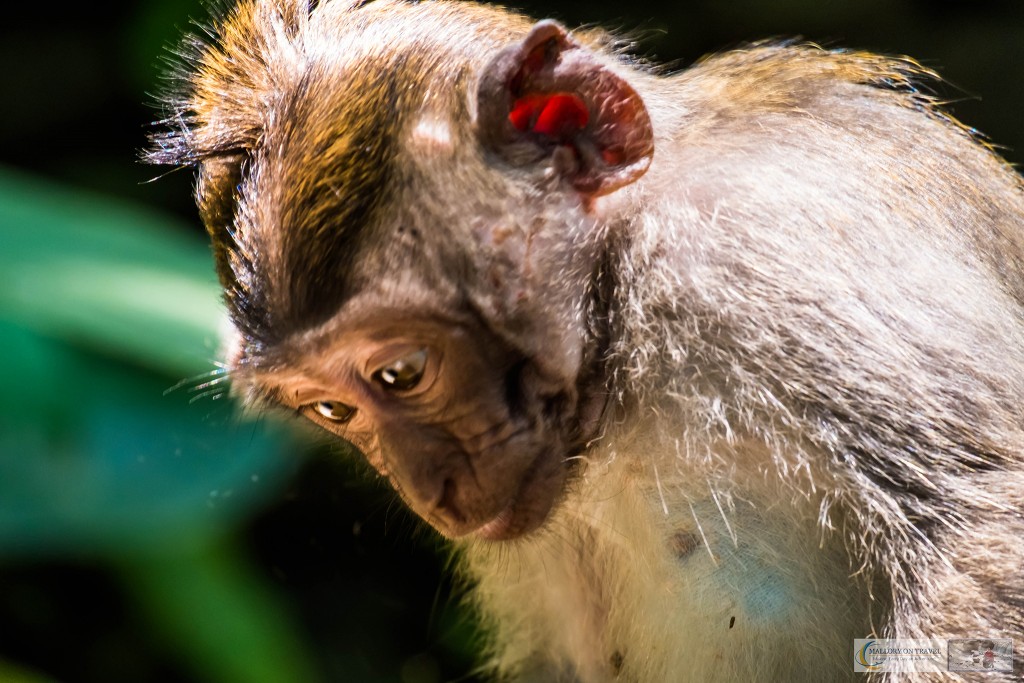 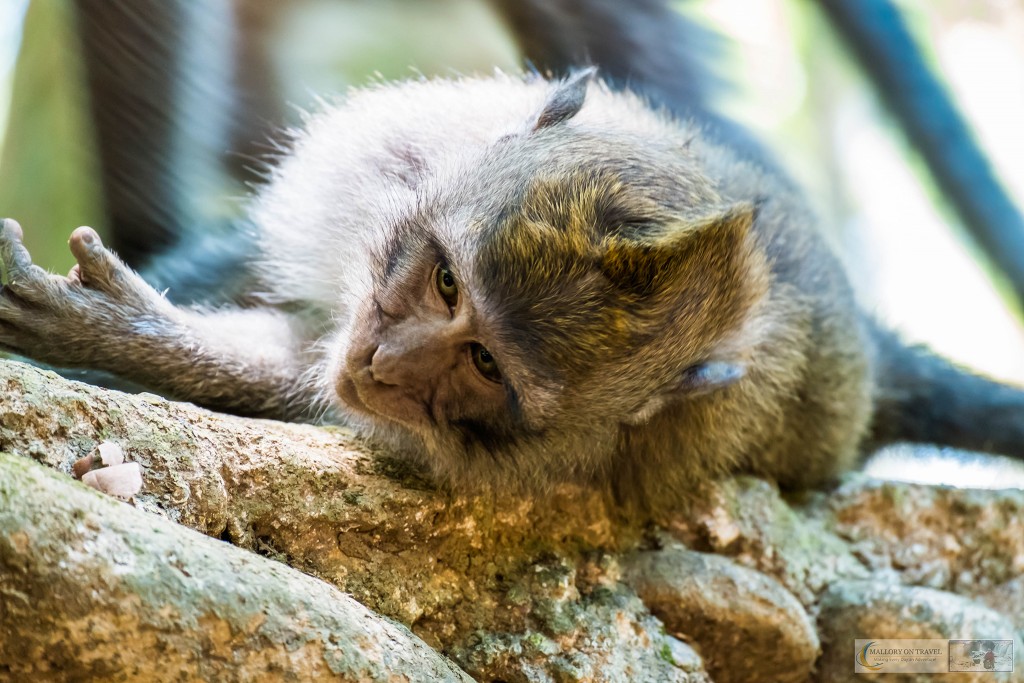 There are over 600 crab eating macaques, known locally as Balinese long-tailed monkey living among the three temples in five troops. The sanctuary is important for conservation and research with a number of programmes studying social interaction and environmental behaviour. 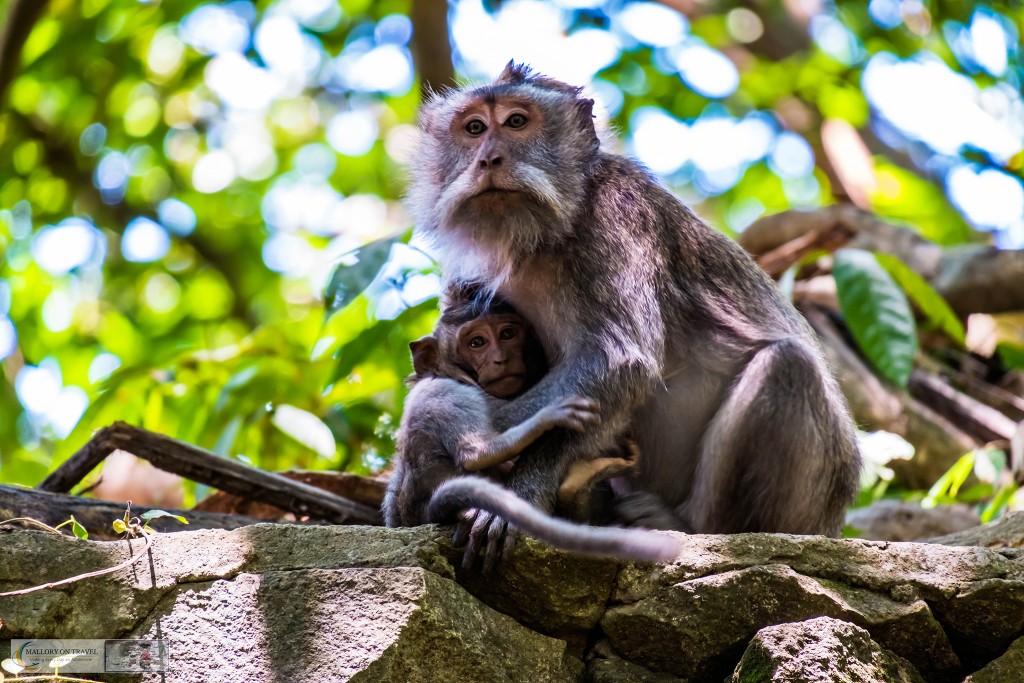 Save me from the primate paparazzi

It’s fantastic that a popular tourist attraction so important to our understanding of primates, after all it could provide huge strides in our understanding of delinquent behaviour. The Sacred Monkey Forest Sanctuary; the fascinating and entertaining study of hoodlums! 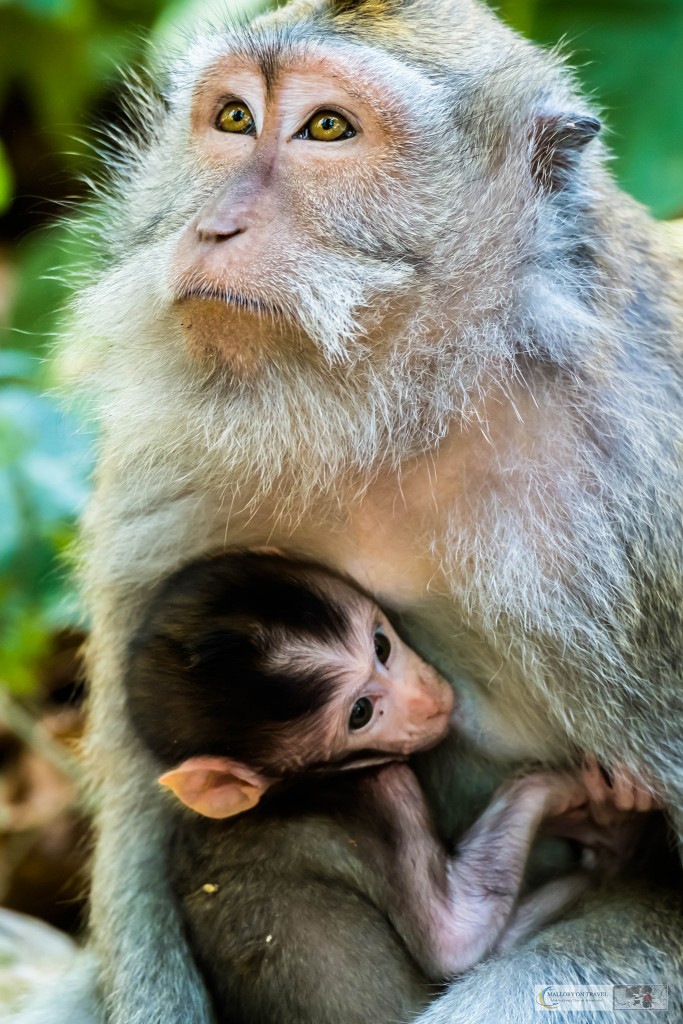 It’s a mother and child reunion