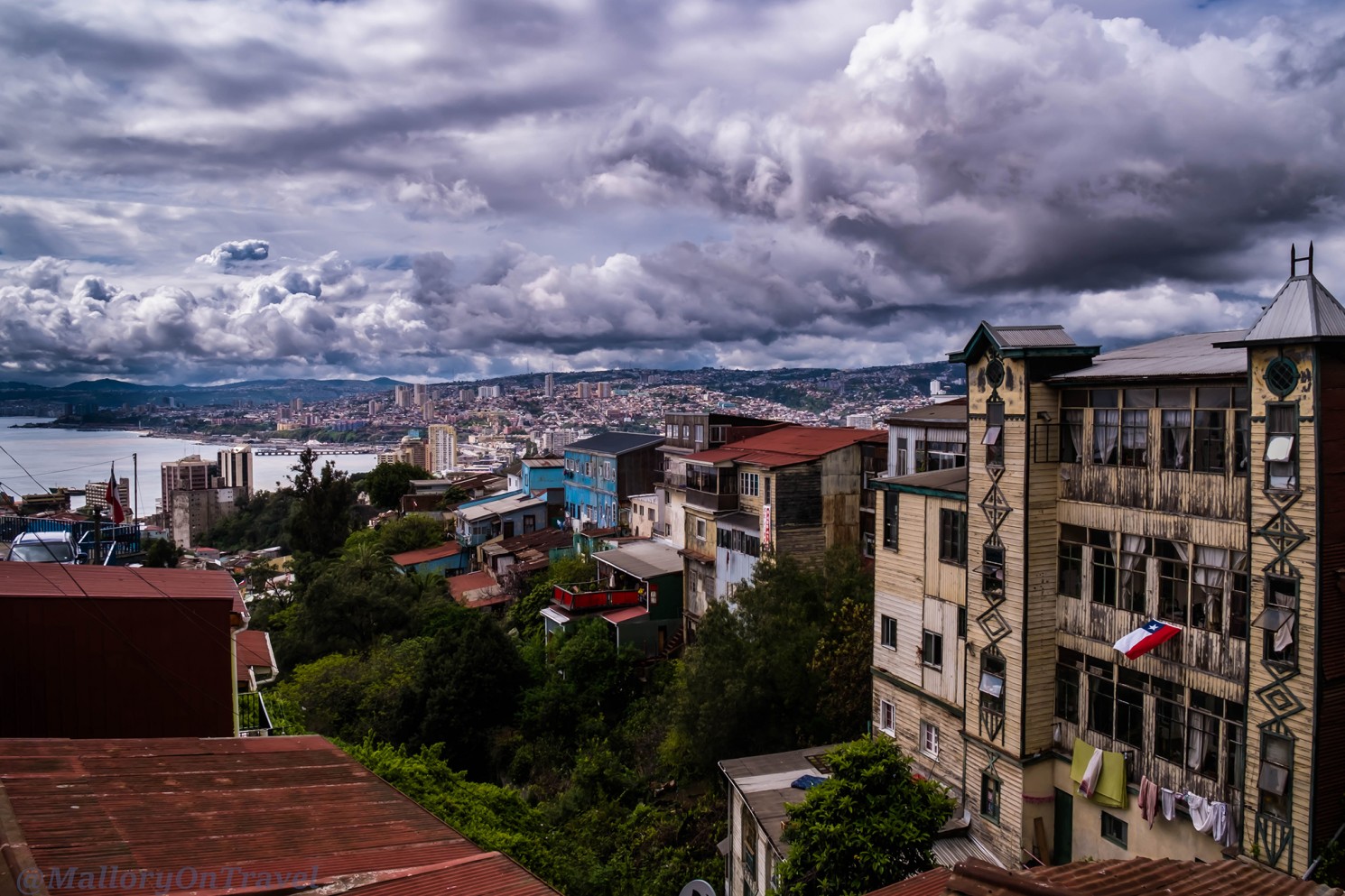 Valparaíso Chile, the colourful container port and resort lies about an hour away from Santiago on the Pacific coast. A wonderfully eclectic collection of brightly coloured and slightly rundown buildings and homes built on the side of a hill, a maze of side streets and alleyways which climb steeply away from the sea. 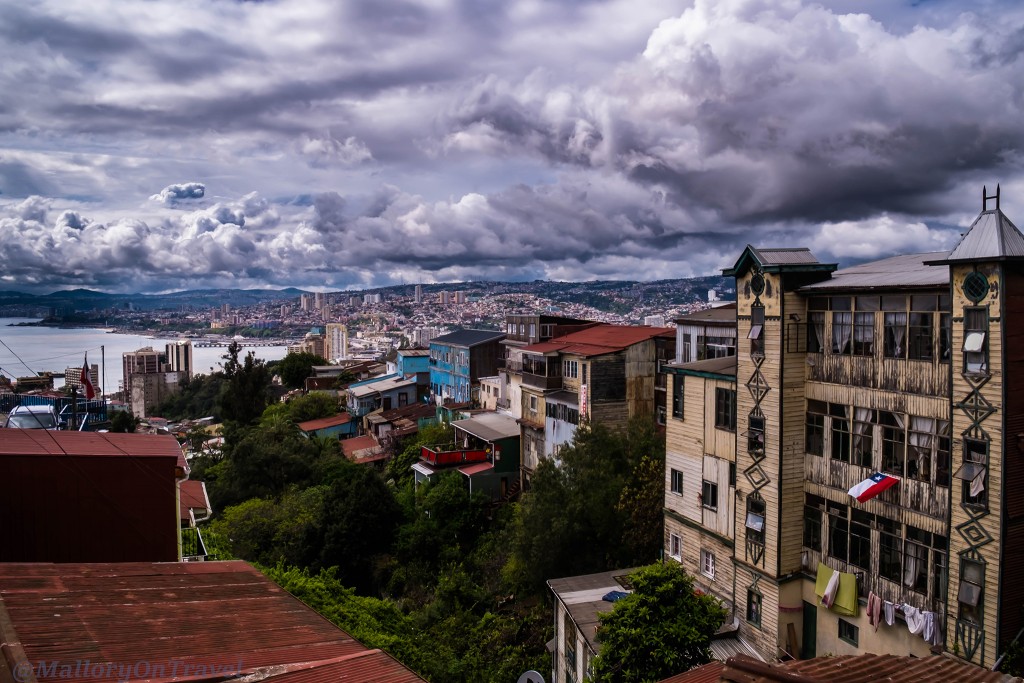 A thriving little harbour offers short excursions which are popular with tourists while the crashing breakers on the nearby shore attract not only local surfers but from far and wide to test themselves against the power of the surf. 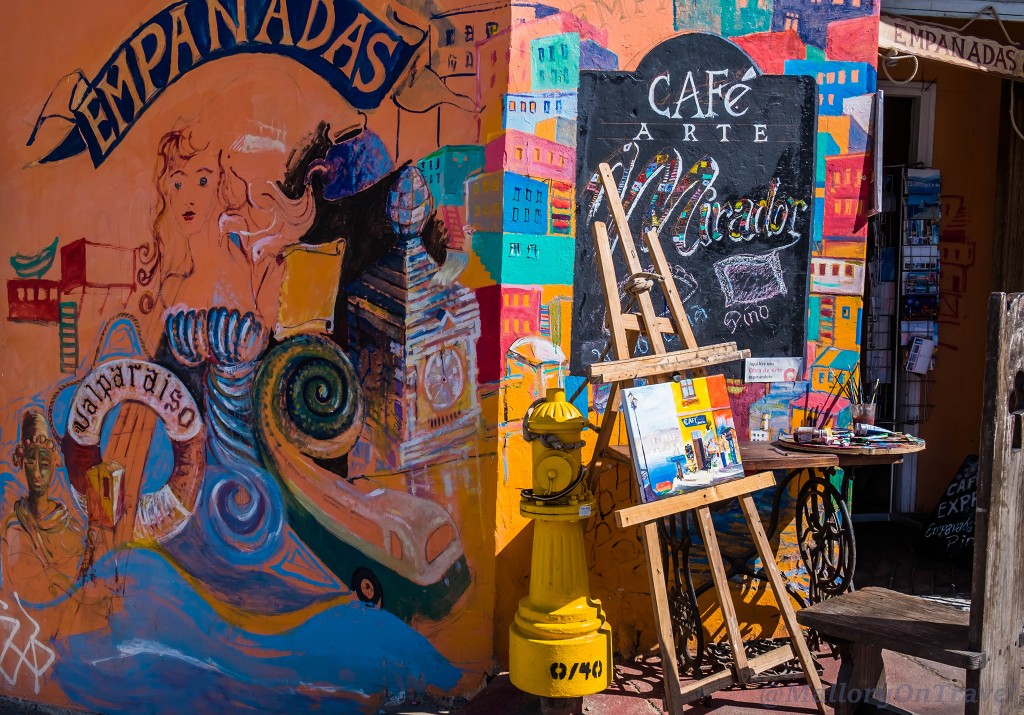 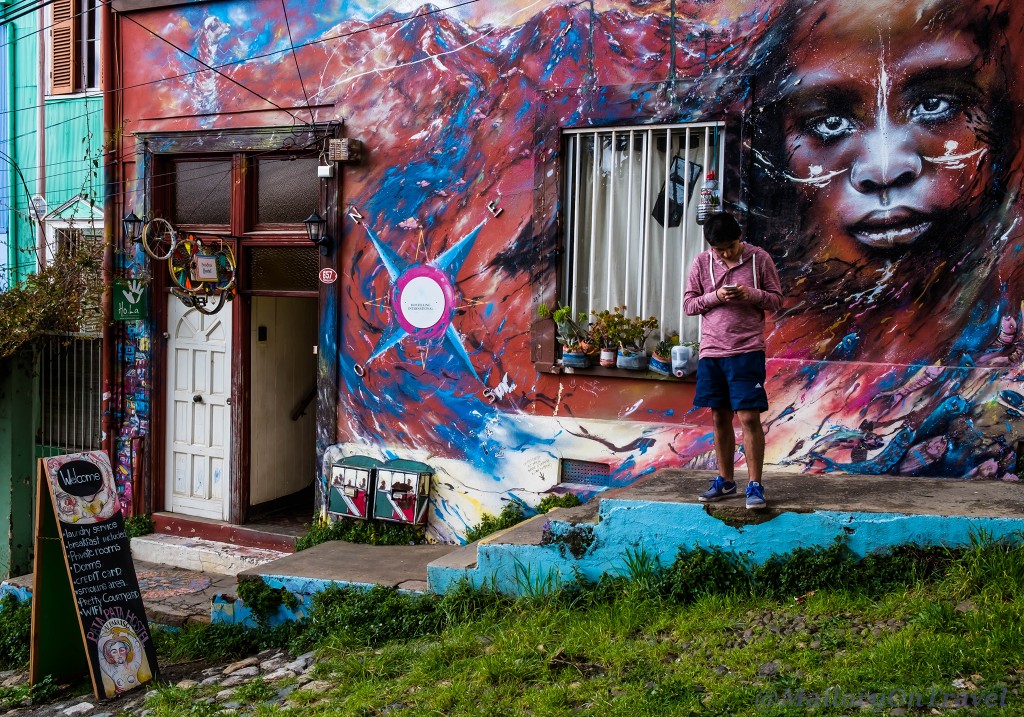 Even the containers in the port below being loaded onto huge ocean going cargo ships, transporting goods to the far reaches of the planet add their own industrial colour to the town. 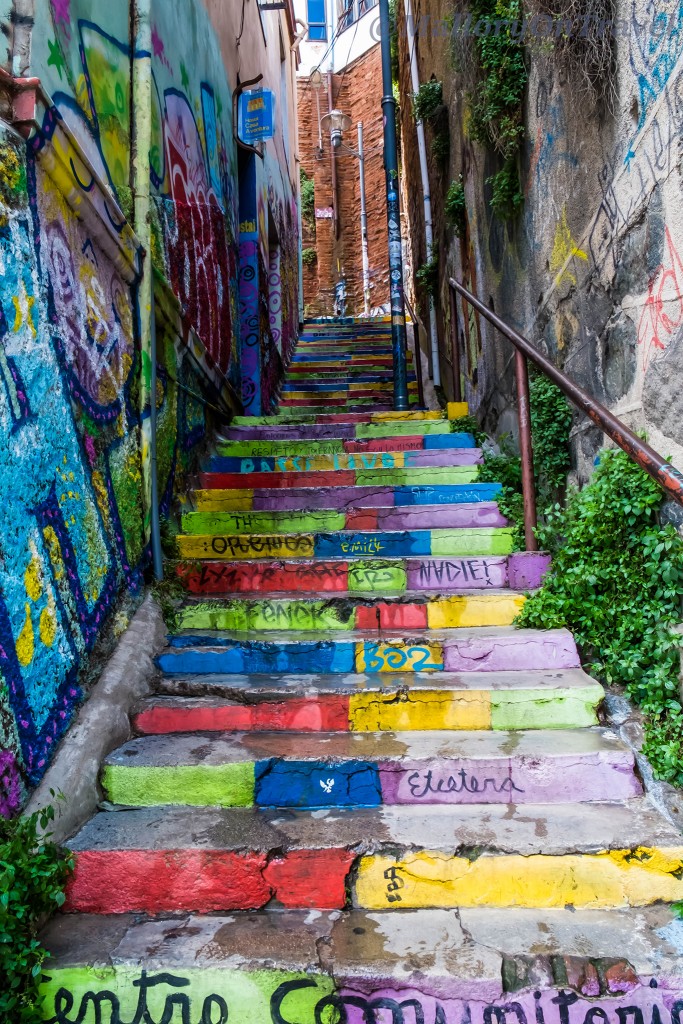 Stepping out in Valparaiso

It is a quirky place, with a bohemian feel, artists create in small town squares, or sell their creations on street corners. Small shops have been converted into tiny, boutique galleries distributed liberally among the multi-hued buildings which form the vibrant town.

Amidst the chaotic labyrinth of streets, it isn’t too surprising therefore to discover that the walls and buildings are painted equally brightly, daubed with the artistic creations of talented street artists.

Admittedly not all the art is of the highest quality, some of the work is little more than the graffiti and rough doodlings which plague cities and waste grounds throughout the world. 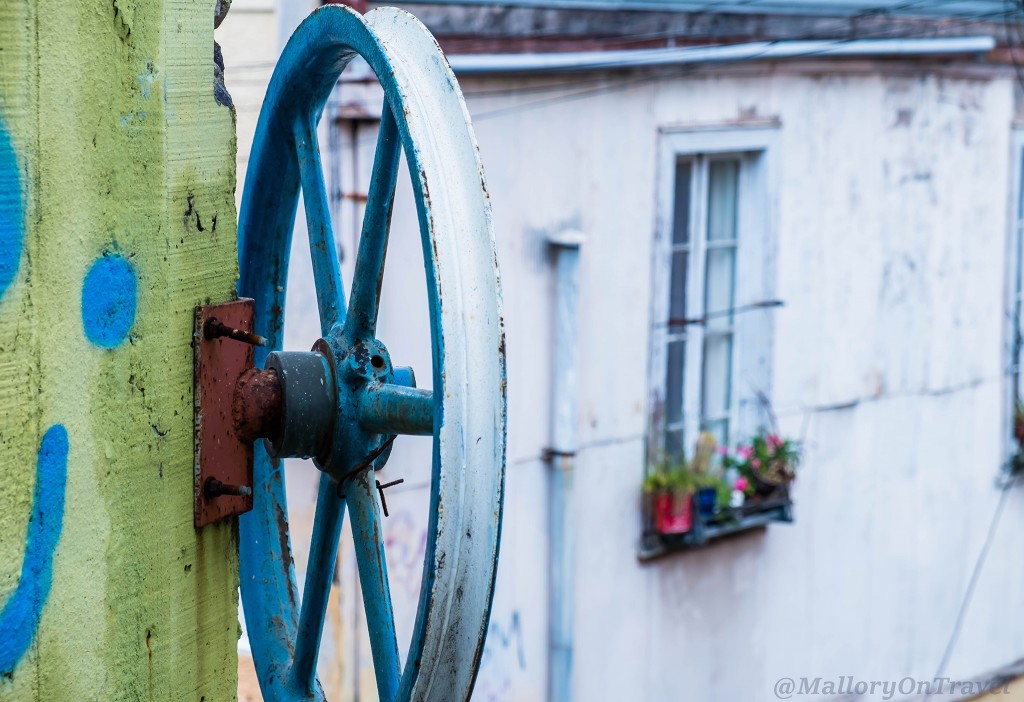 Bohemian Valparaiso, it’s all in the details

Fortunately, there is plenty of worthy art to admire, the vibrant, imaginative creations of talented street artists, Valparaiso is their canvas, and the streets their gallery. There is almost a surprise around every corner, each wall seems decorated in a mural more impressive, complex or detailed than the last.

Bright hummingbirds, character filled portraits, undersea worlds, chaotic scenes created by imaginative minds, some serious other almost cartoon like, with animated characters which should surely come to life at any moment.

Even alongside dilapidated, rundown buildings, or rubble piles where repair work is being carried out there is almost always some painted wall art.

There are other quirky little details scattered around the town, quaint old fire hydrants, pennants and even old fashioned, spoked wheels protruding from whitewashed walls. Being observant, and remembering to look up is essential. 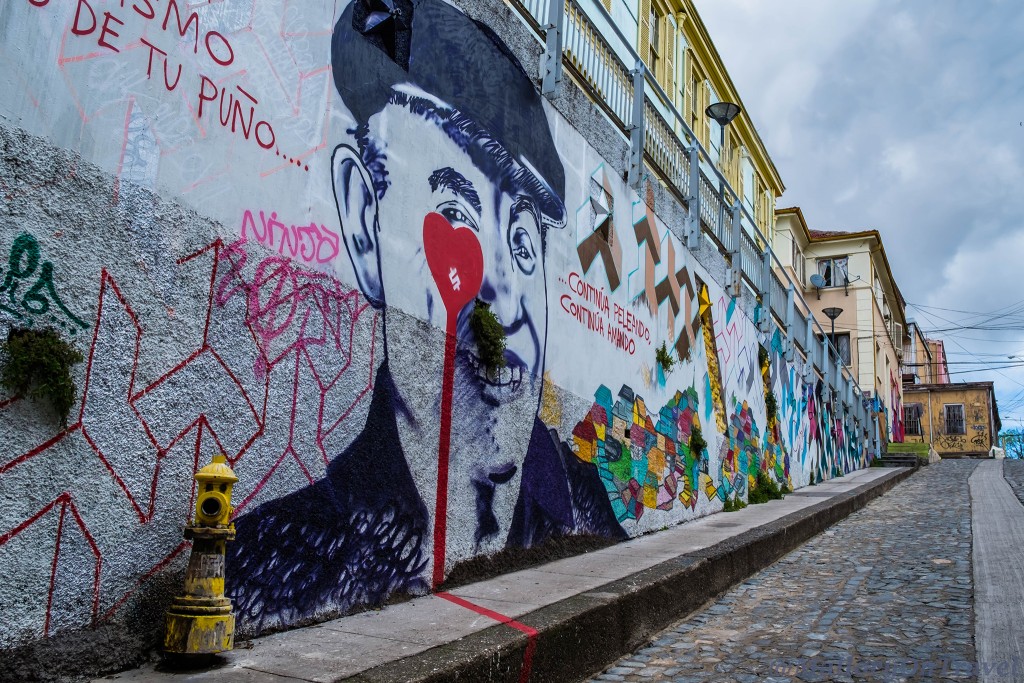 It would be easy to get lost, as the streets are a warren of twisting, turning back alleys which criss-cross this area of the town. Although this isn’t an entirely unpleasant way to wile away an afternoon or even day, it’s better to take a guide. I was grateful for their knowledge, ensuring that the best pieces were found, better to be lost than to lose out. 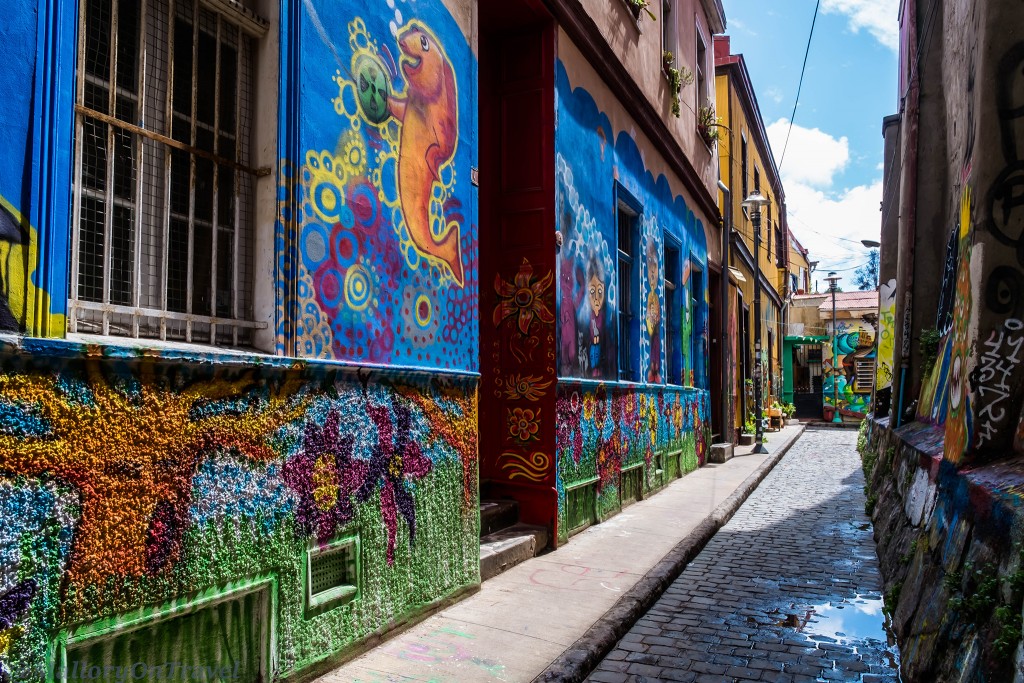 Despite the steepness of the streets it’s not an especially tasking walk around the resort, especially as it’s likely that anybody taking the tour will stop often to take photographs or just gawk and admire the many colourful creations which adorn the streets of Valparaiso. Fitness isn’t really an issue on this street art tour. 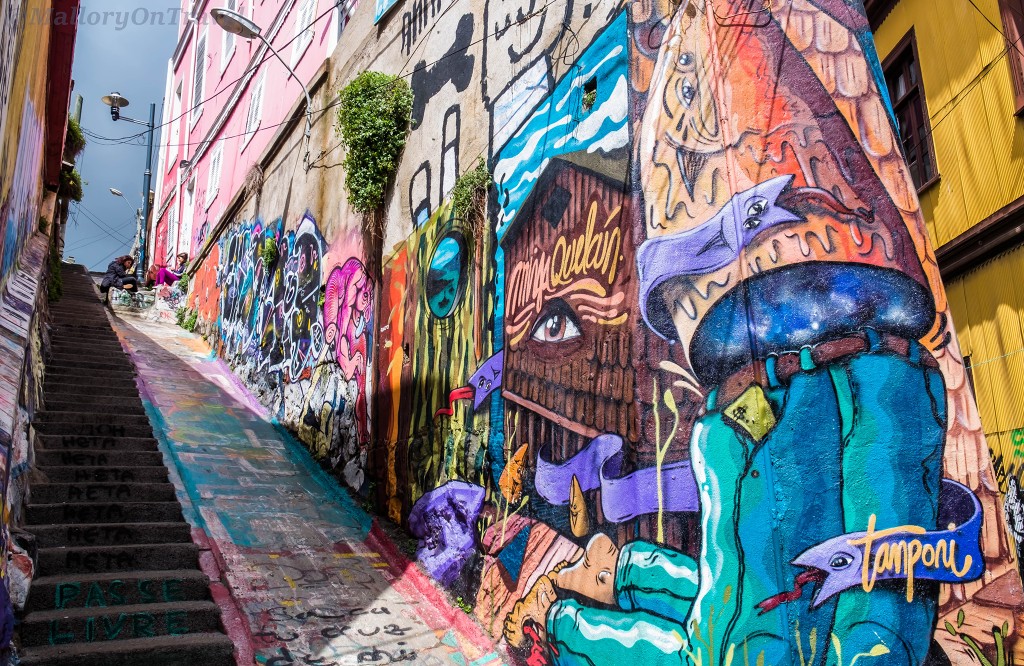 Once completed there’ll still be time to enjoy a coffee or pastry in a quirky or fashionable café, some of which will be selling canvases from the artists which produce their creations on a smaller scale. Finally, when the sun begins to set, it’ll be time to join the surfers catching the last waves and admire the fire in the sky, as colourful as the art in the streets, or the galleries.

Even the greatest artist of all uses Valparaiso to showcase her talent! 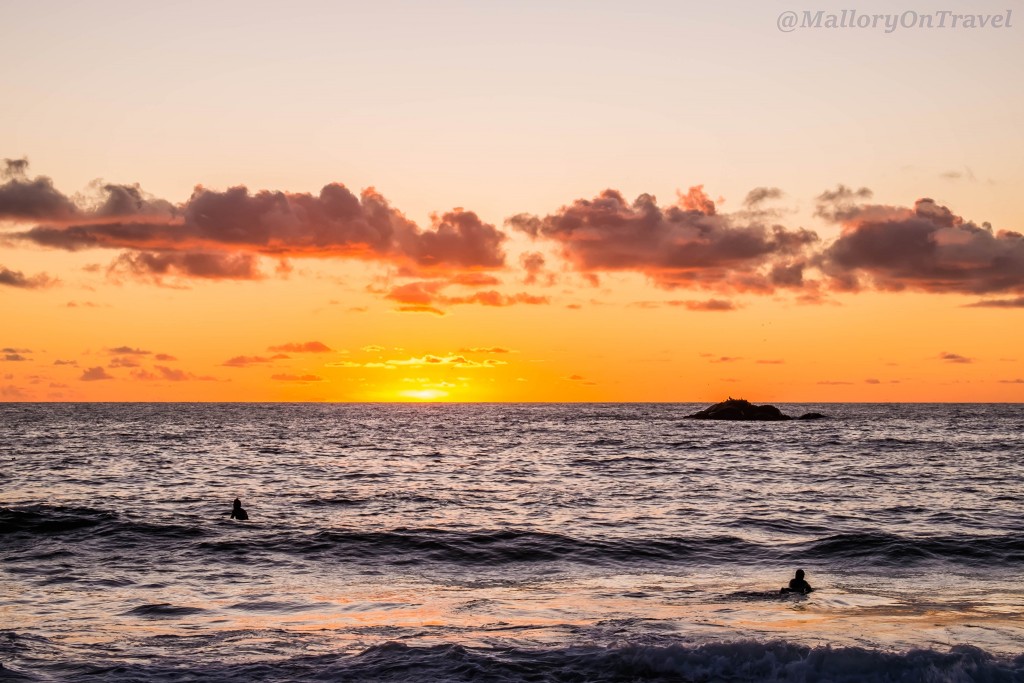 Colourful end to a colourful day