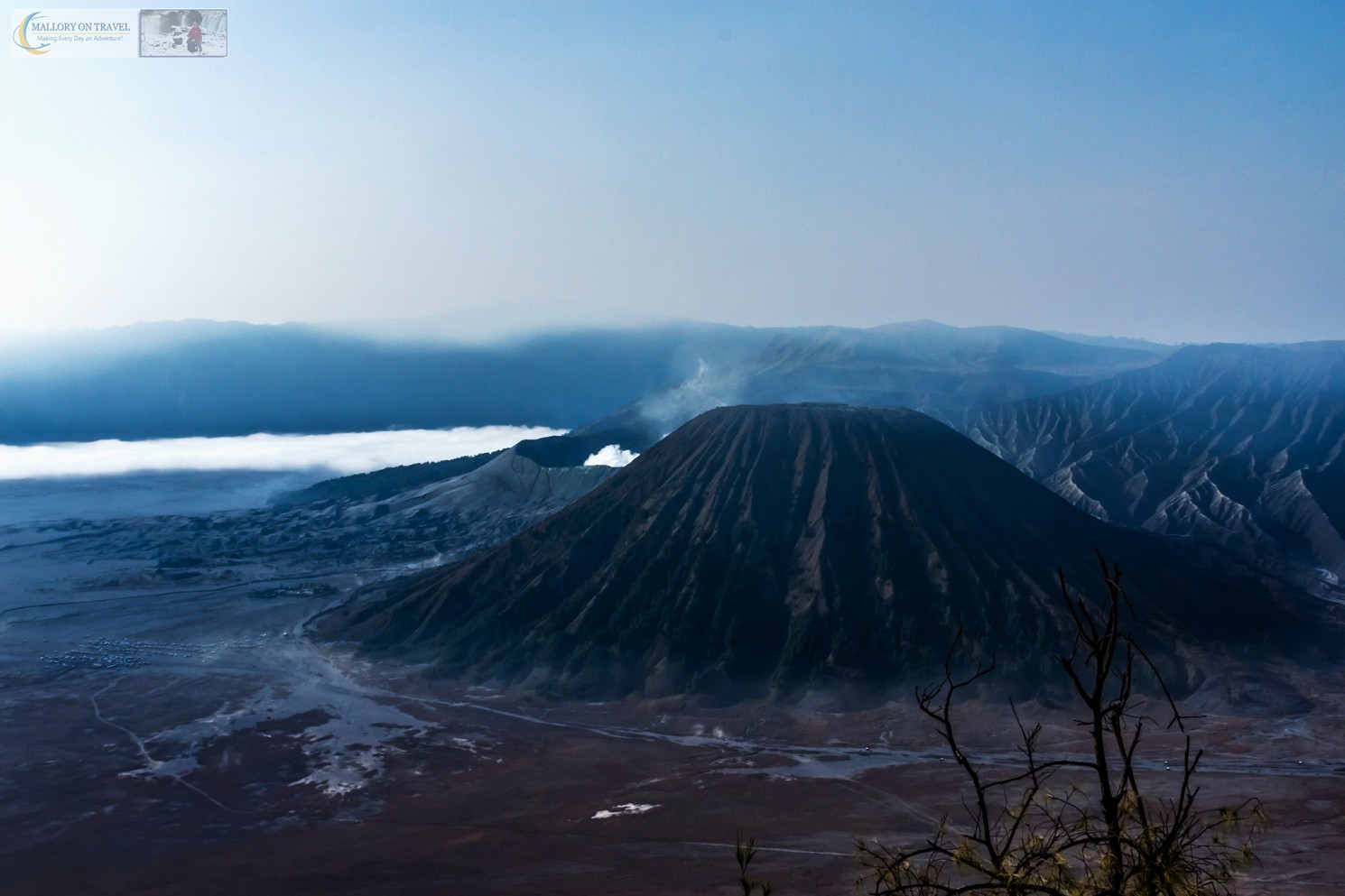 Never having been described as an early bird, friends may struggle to find a believable reason for me dragging myself from a warm, infinitely comfortable bed at the Java Banana Lodge, Indonesia at 2 am. However, the opportunity to finally get up close and personal with the smoking, active crater of a volcano was even more inviting than any resting place. Mount Bromo, possibly one of the best known of the country’s volcanoes was the early morning quarry. 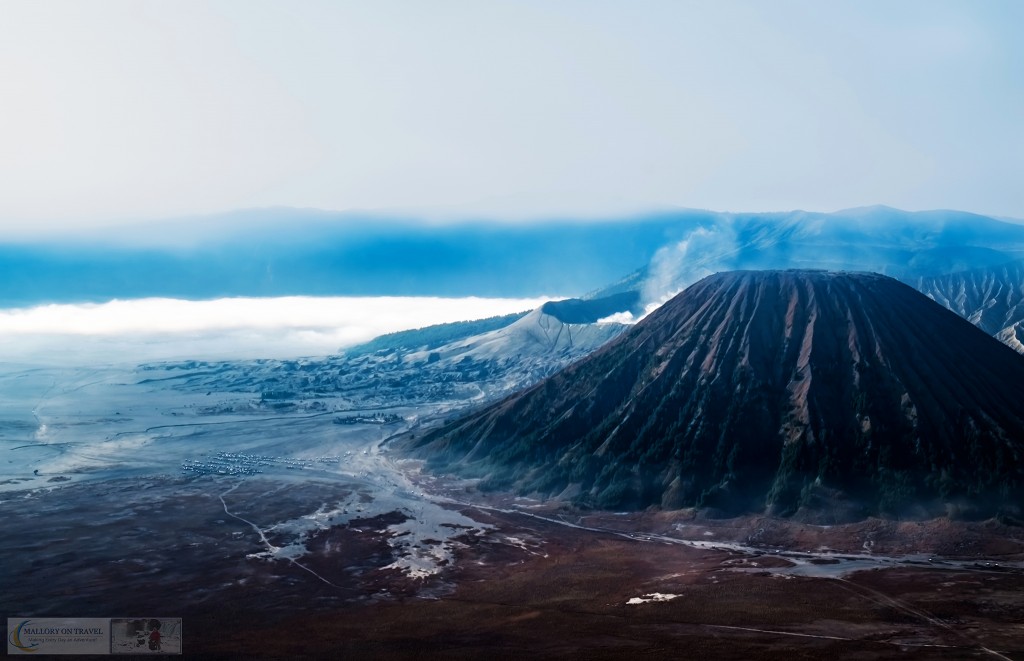 The steaming crater of Mt Bromo

The reason for the early start was supposedly to get the jump on other early risers and have a choice of spots to set up cameras and witness the spectacular sunrise over the smoking volcano. Tourism in Indonesia however, is seldom a solitary pursuit, and as we were soon to discover, the rising sun over Mount Bromo is also one of the country’s most popular tourist attractions. 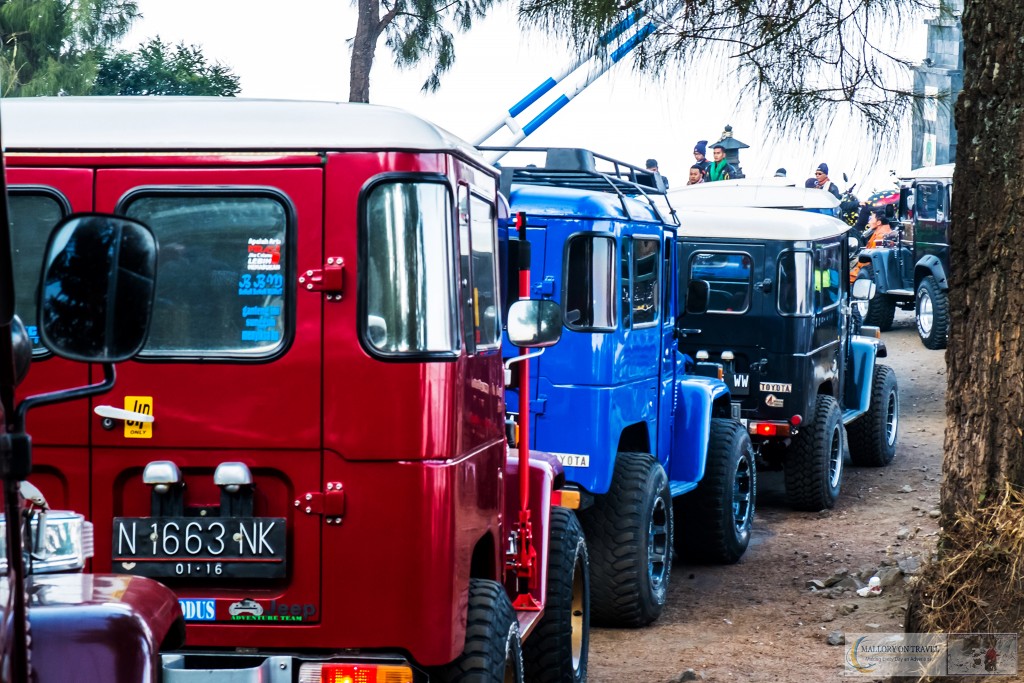 Our group split into smaller jeep sized parties, climbing into the small convoy of multi-coloured off-road vehicles which soon joined a much larger convoy of jeeps and motorcycles racing, dodging and jostling for advantage in the dash to the summit. It is a seemingly chaotic procession, with the smaller motorcycles weaving between the more cumbersome jeeps, carrying their passengers slightly closer to the top than the larger vehicles allow.

They are tested to the limits of their mechanical abilities, not always passing the test as some over heat or break down by the side of the road, their distraught owners attempting on the spot repairs, as a stranded motorcycle is losing money. Occasionally, they are beyond simple repair, and have to be recovered, usually precariously balanced across the back of another motorcycle.

We were dropped several hundred metres from the top, requiring a short hike, passing roadside merchants and a few low key places to eat before finally reaching the view point at the peak.

It seemed unlikely we’d have the place to ourselves but finding several hundred people already there was a less than pleasant surprise, Indonesia certainly believes in mass tourism. Most of the prime positions had already been taken, but most of us still managed to find an acceptable place to set up a tripod and wait in anticipation of the Mount Bromo sunrise. In the meantime, a steady stream of people continued to arrive, until almost every space was taken. 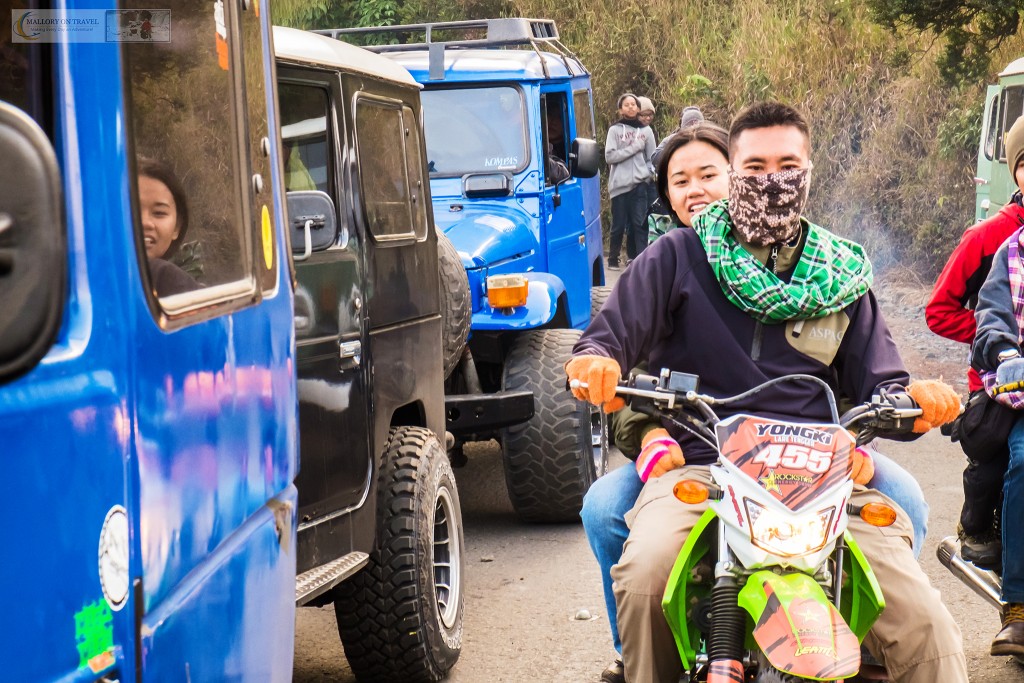 Contemplating the beauty of solitude in nature seemed unlikely, though possibly our insignificance seemed even more pertinent!

As the shroud of darkness began to slip, the cold light of morning started to take hold, but unfortunately, we were to be disappointed. Mount Bromo and the surrounding peaks were to remain hidden beneath a blanket of thick cloud. We waited patiently, expectantly, hopefully, but apart from the occasional break, providing a tantalising glimpse of the hulking shape of the volcanic mountain, it remained hidden.

The headlights of jeeps could also be seen moving far below on the plain known as the “Sea of Sand” beneath the heavy cloak of cloud.

People chatted amicably, cheerfully even, but the atmosphere was understandably heavy with disappointment. Eventually, people began to drift away, grabbing a coffee and a grilled corn before hiking back to their numbered jeep.

Fortune smiled upon us however, the sun beginning the shine, burning away the layers of cloud, until only wispy strands remained, floating around the base and crater, mixing with the smoke billowing from within. We may have missed the sunrise, but the view of the conical mount which almost shields the smoking Bromo rising from the Sea of Sand, still provided an impressive spectacle.

We paused as long as possible, soaking up the alien scene before us, apart from the ever present jeeps, it could easily be the landscape of the moon, possibly even the well-known “Sea of Tranquillity“. 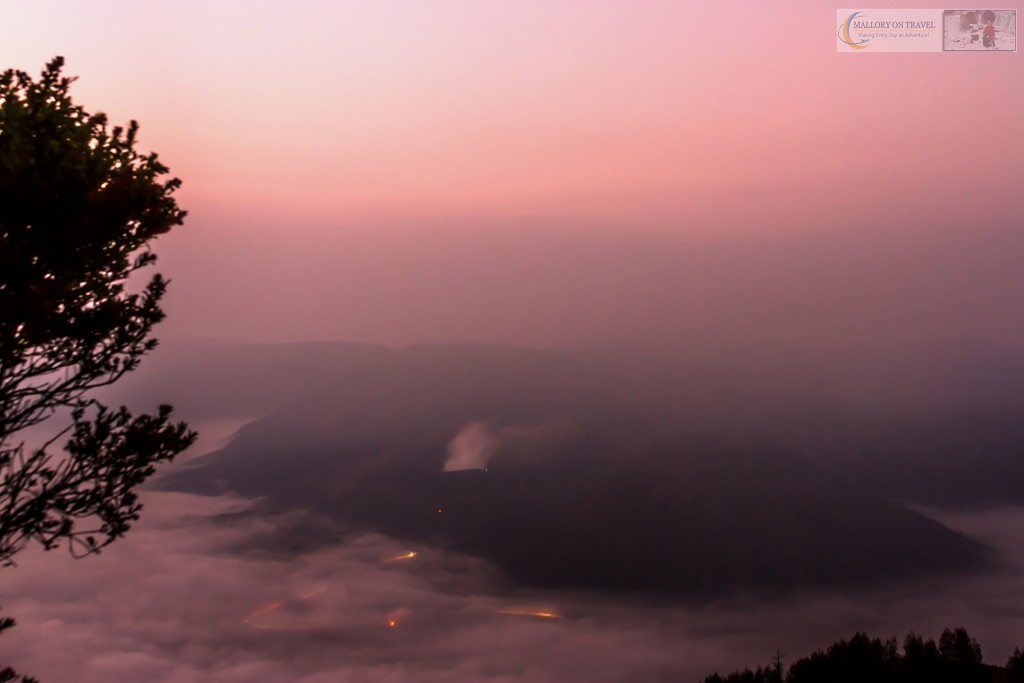 Another short jeep versus motorcycle race down to the plain and next stop the crater of Mount Bromo itself. Watching riders on scooters attempting to take their ill-suited two wheeled vehicles across the plain, sliding and falling in the soft sand was strangely entertaining.

The intended mode of transport across the “Sea of Sand” to the summit steps was horses, but on seeing the condition of some of the poor creatures, several of us decided to take Shank’s pony instead. 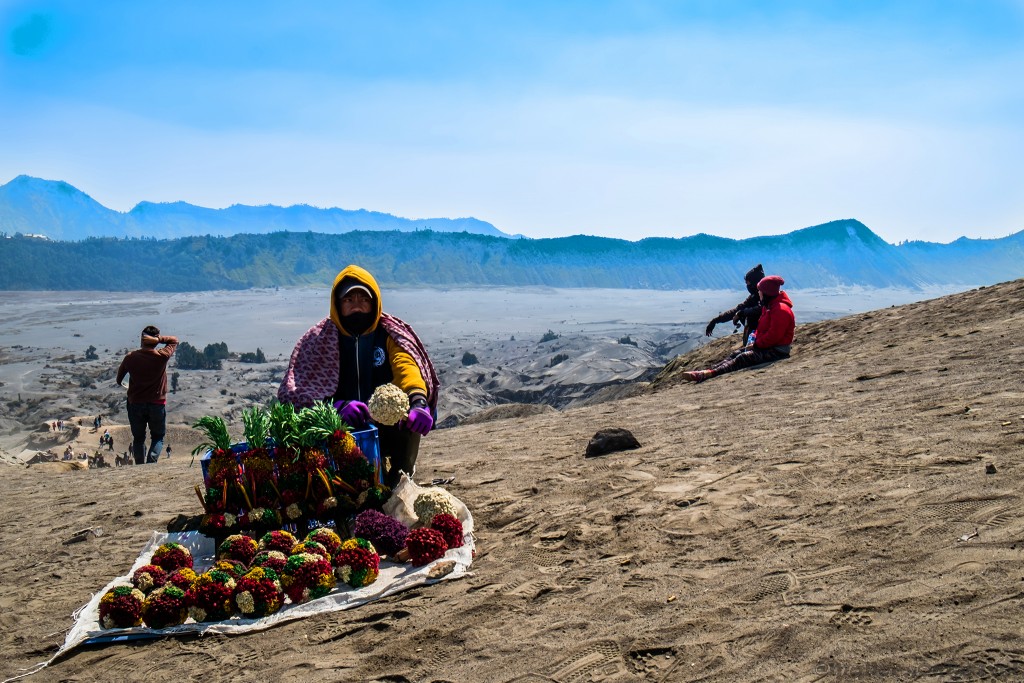 Merchant in the Sea of Sand

This turned out to be a pleasant enough stroll across the sandy plain, with plenty more ‘pilgrims‘ slowly making their way on foot to the steps which lead to the crater. There are also more merchants selling water, refreshments and handmade sacrificial objects to throw into the smoking caldera. 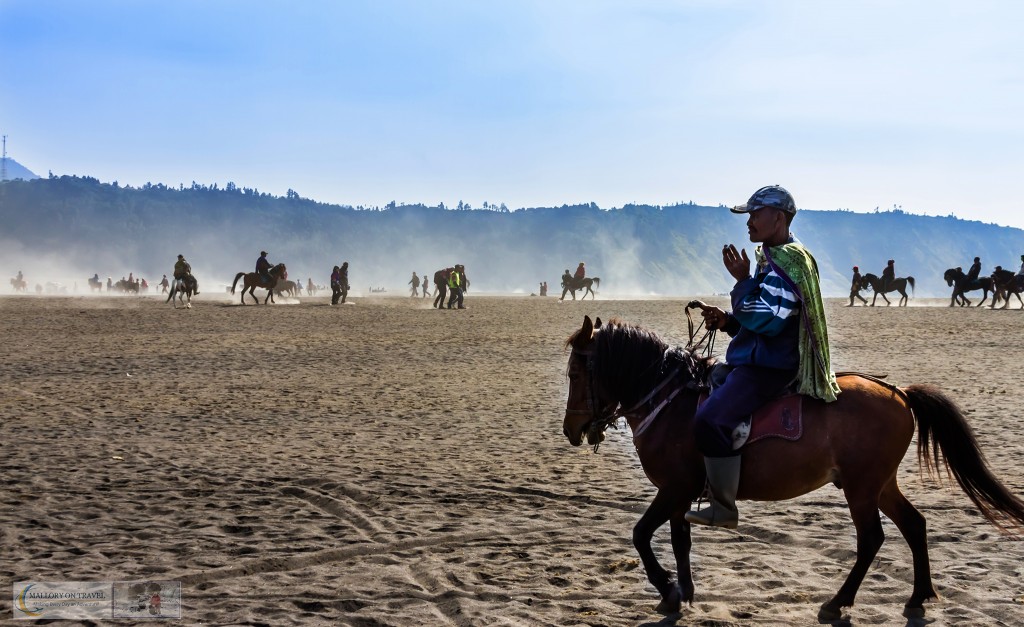 The Sea of Sand

Progress to the crater was slow, as a long line of visitors steadily made their way to the top of the steps to get a view of Mount Bromo, the stench of sulphur reaching noses long before the summit is reached. Once there the stench becomes almost overpowering, most visitors covering their faces and snatching a few quick photos before beginning the descent. 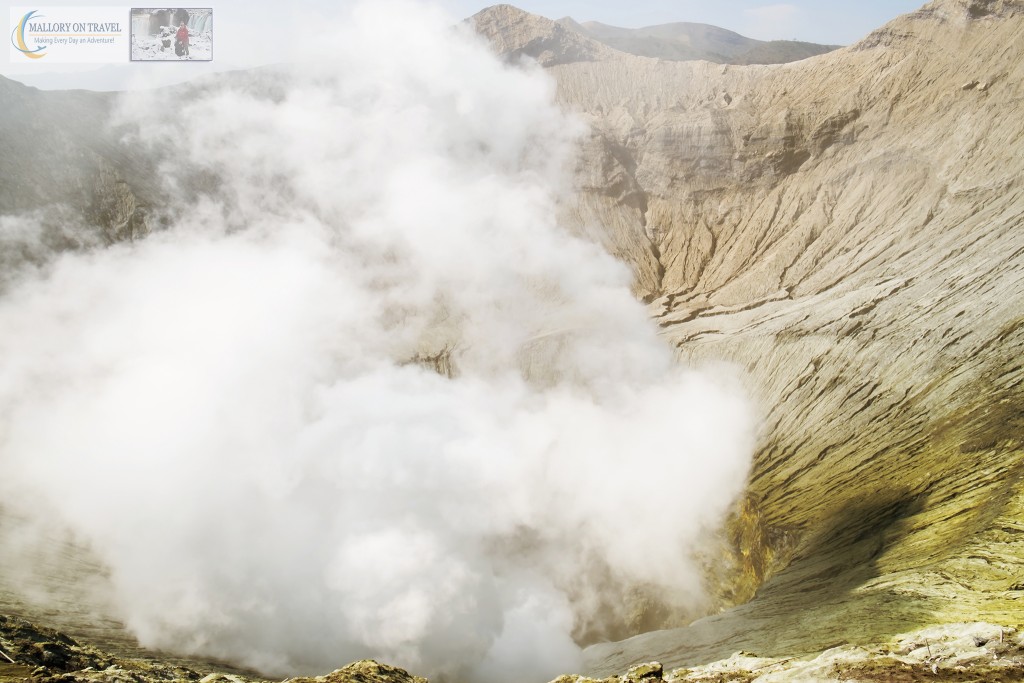 This was my first view of a truly active volcano, causing me to pause, dwelling on my good fortune and the impressive power that nature possesses. It was a sobering moment, despite the ingenuity of humankind, our innate ability and need to advance we are still largely powerless, insignificant against the might of nature. A volcano exemplifies the extraordinary and often brutal, irresistible force of nature.

Edge of the caldera

The spiraling steam billowed from the caldera like a small, but growing cloud, the air heavy with the stench of rotten eggs and hundreds of visitors, both foreign and Indonesian milling around the crater.

There wasn’t much peace and quiet, but I was still very grateful for the rudely early start and had totally forgotten about that infinitely comfortable bed! 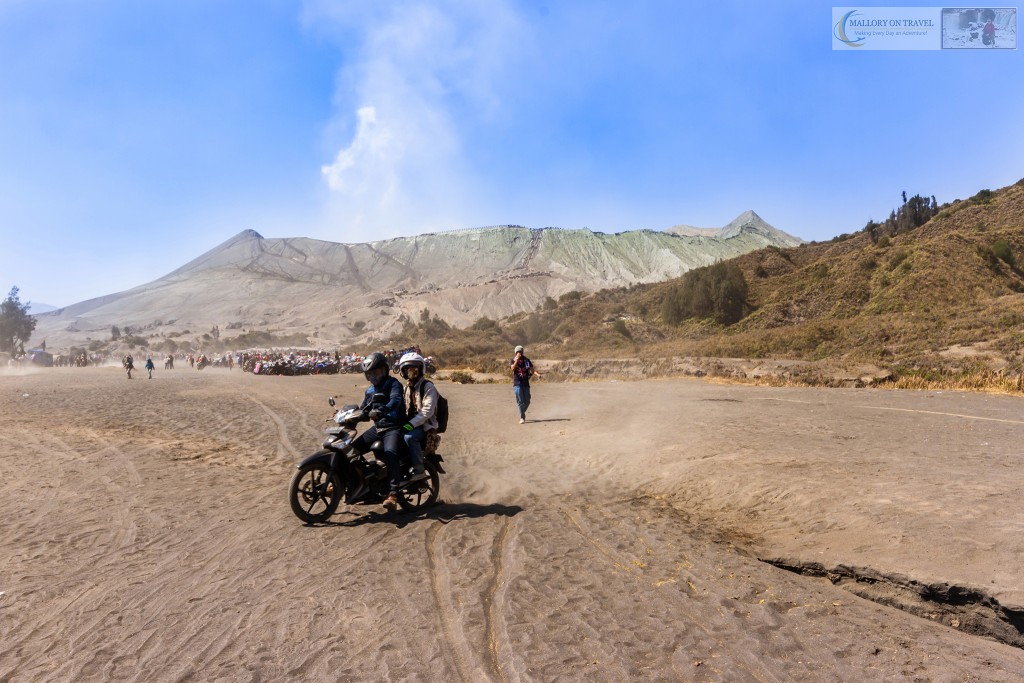 Mount Bromo began to erupt again in 2004, but has also erupted in 2010, 2011 and volcanic activity increased once more, resulting in the ejection of ash in November 2015, a month after our visit…… what do you think, a visit too early or perfect timing? 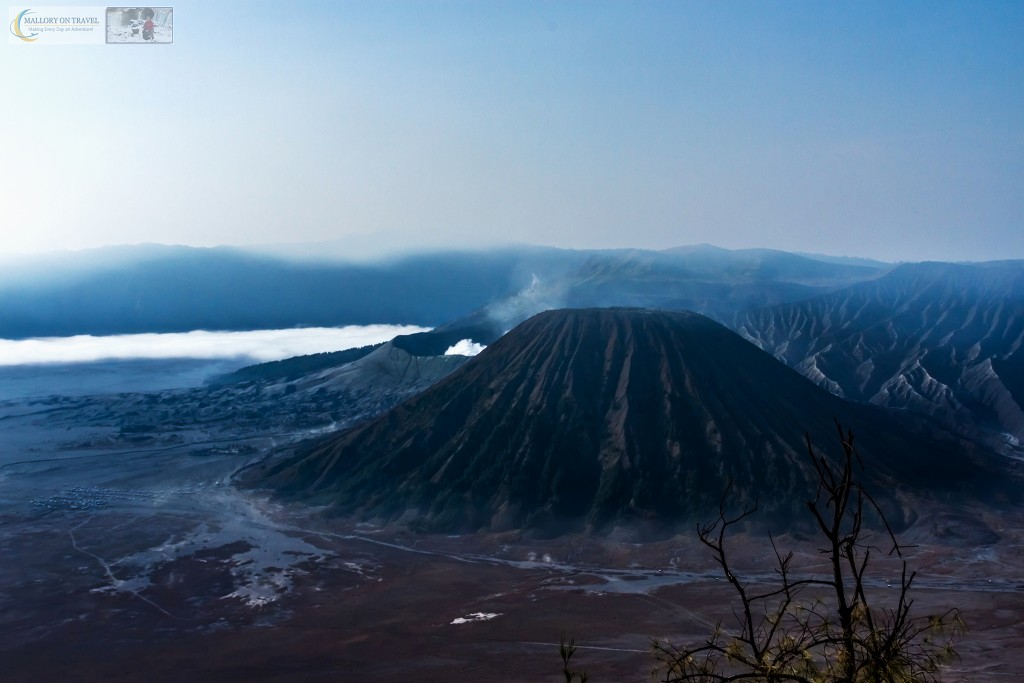