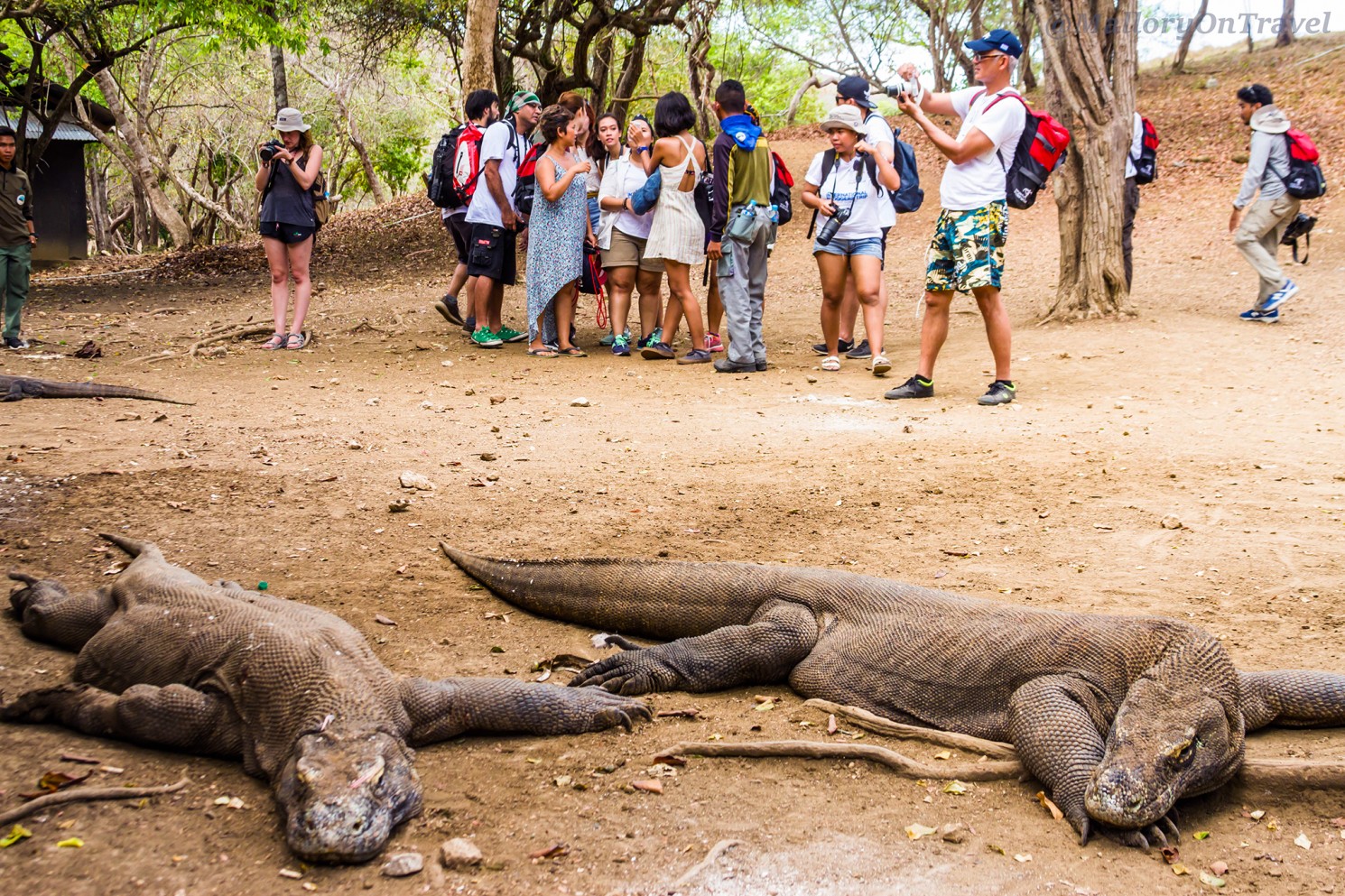 Having received an invite to visit Indonesia, with an opportunity to see impressive temples, an active, smoking volcano crater, and an exciting culture it was the promise of seeing dragons that was too good to refuse. Seeing the largest lizard on the planet, the notorious Komodo dragons had me emailing my acceptance by return of post.

Several months later, along with the other invited guests of the Indonesian Tourism board I found myself living the dream, almost within touching distance of dragons. A moment I’d dreamt of ever since seeing David Attenborough up close and personal with these huge reptiles. Watching a particularly determined and aggressive specimen chase the late Steve Irwin up a tree had only increased my interest rather than diminish it. 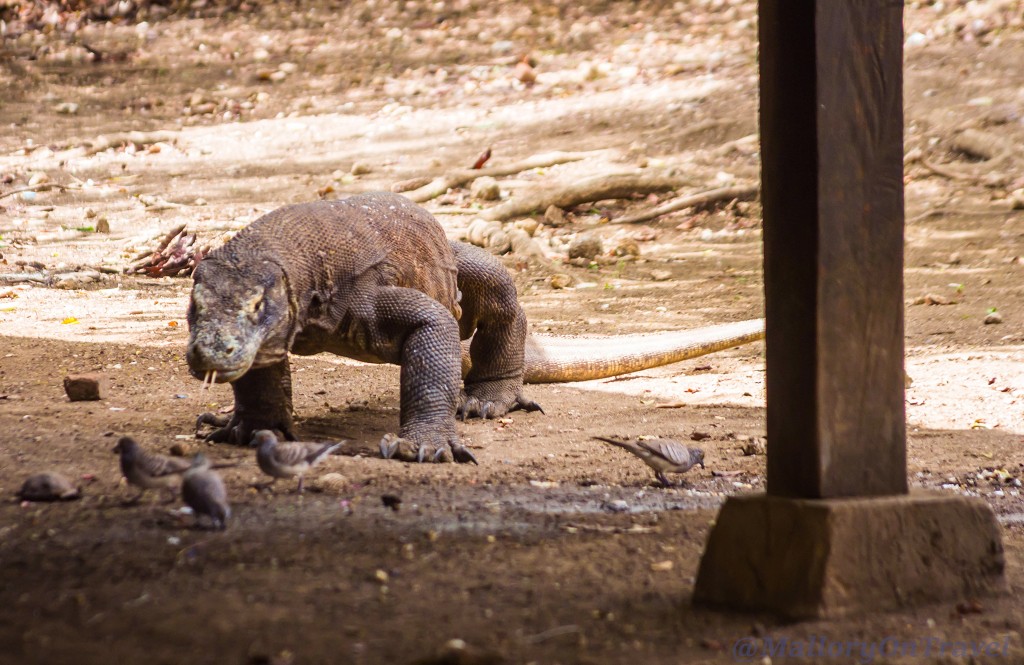 The largest member of the monitor lizard family grows to up to three metres and lives on the islands of Komodo, Rinca, Flores, Gili Motang and Padar. They are carnivorous, taking down prey as large as goats, deer, wild boar and even water buffalo, although birds, small mammals, eggs and carrion probably makes up most of their diet. Infamously, they have been known to attack people, and one of our rangers had actually been attacked! 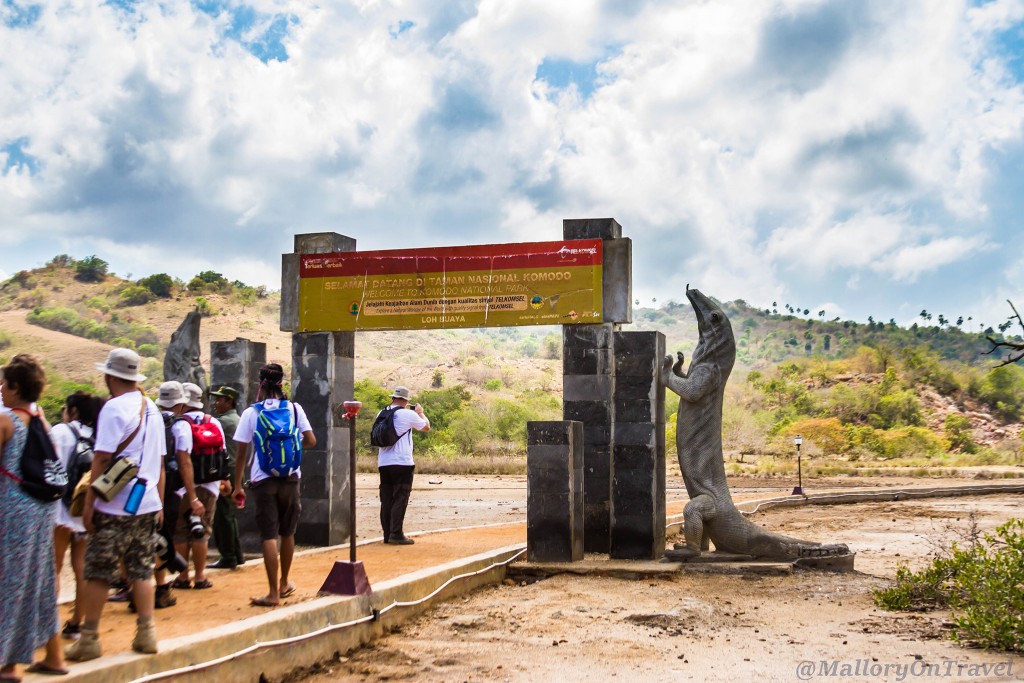 The entrance to Loh Buaya

It was believed that bacteria in the saliva caused infection in large animals until they eventually died of sepsis. Recent research however has proven that they actually have surprisingly good oral hygiene and that there was another explanation for the fatality of their bite. After being bitten, most large mammals tended to retreat to warm, fetid water, which they caused infection in the bite and hey presto a myth was born.

Their extraordinary size is attributed to having no other large predators present, allowing the dragons to fill an evolutionary niche, becoming the apex predator in the Komodo islands. 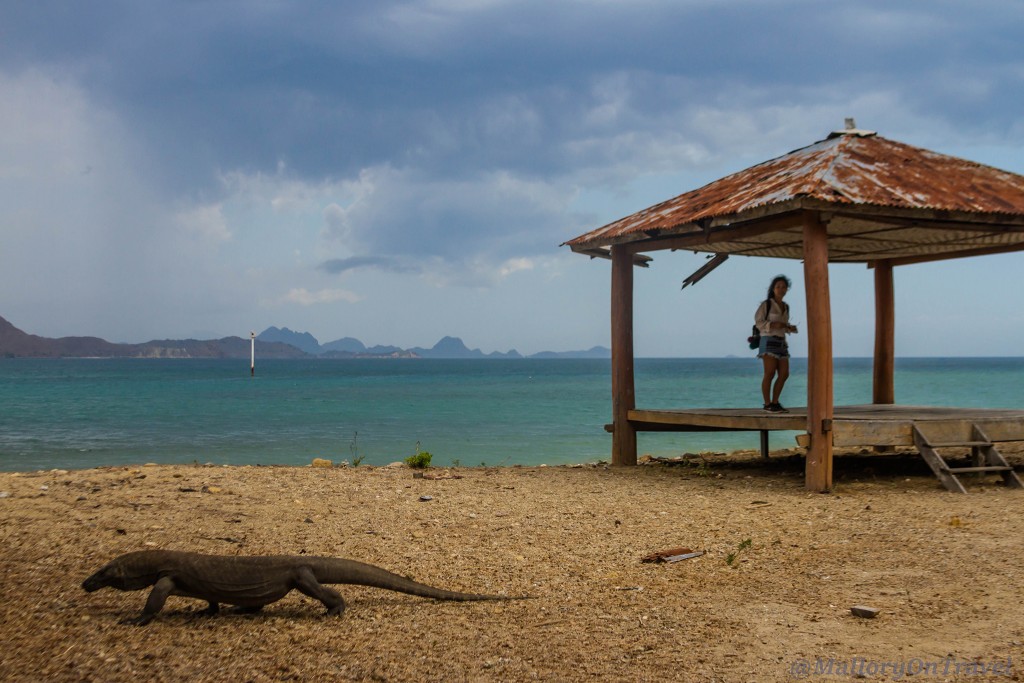 On arrival at Loh Buaya, Rinca, we received a detailed briefing from our rangers, like cabin crew they were for our safety and listening to their advice, often earned through hard experience.

We’d already seen dragons, they certainly weren’t shy or hard to find, we’d been immediately greeted by one strolling across our path and it was the first of many we were to see.

Most of the time, they just lazed around, hiding in the shade beneath trees or under the buildings, which are all elevated off the ground. The reason is probably to make access more difficult for dragons rather than to give them a place to lie out of the sun. 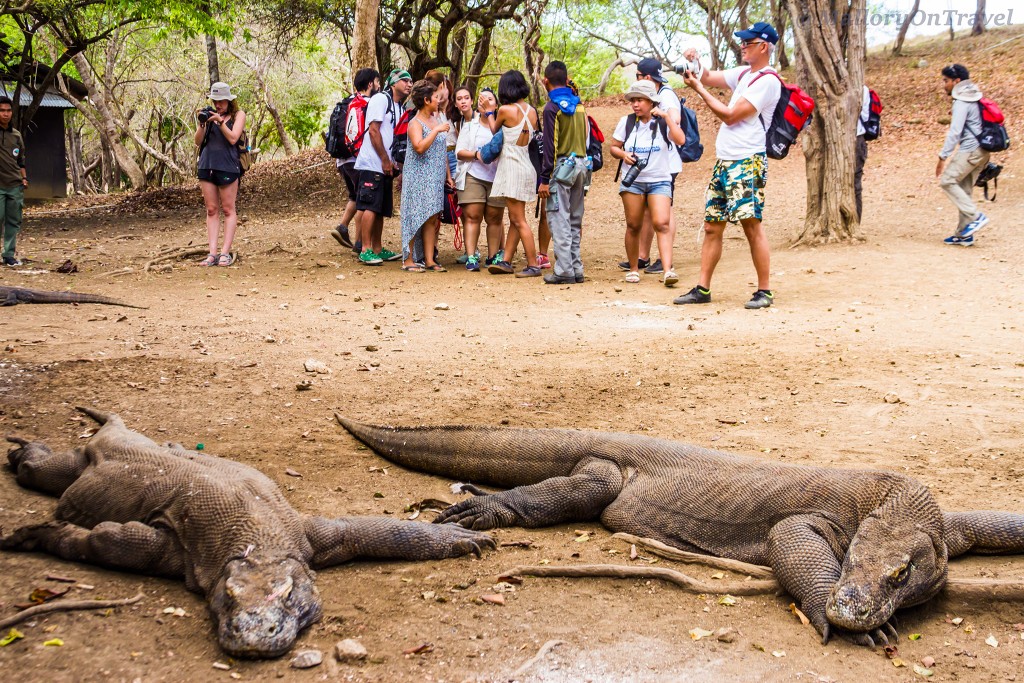 Apparently dragons can be much more aggressive, especially during breeding season, when unsurprisingly the males are also more active. During our visit however, they were generally passive, most of the time just sprawled out in the shade, making photography less of a challenge.

Despite their ferocious reputation, nobody appeared to feel threatened, either their passive appearance or the trust we had in the guides but there did not seem any reason to feel concerned. Even when our guide related the tale of his attack in the nearby woodland when he was a young man. 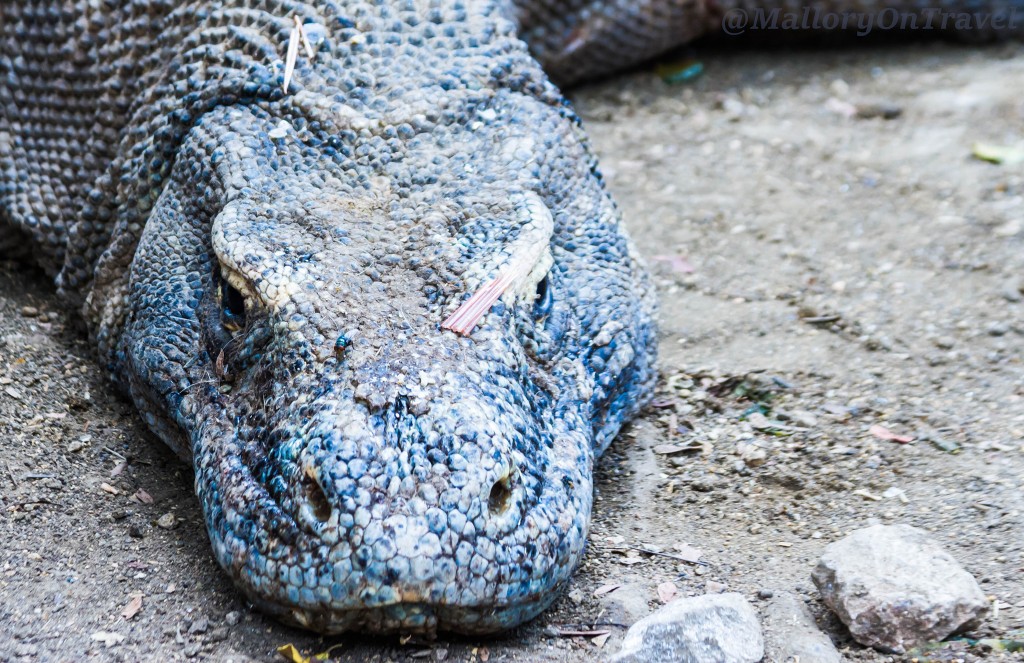 Portrait of a predator

They are a muscular creature however, their power is obvious and along with a formidable set of claws this would be a top predator in any ecosystem.

The visit included a short trek around the island, where we saw a couple more in natural surroundings, creeping through the undergrowth and in deep shrub like grass. There was also some wild boar and deer, the natural prey of this apex predator. 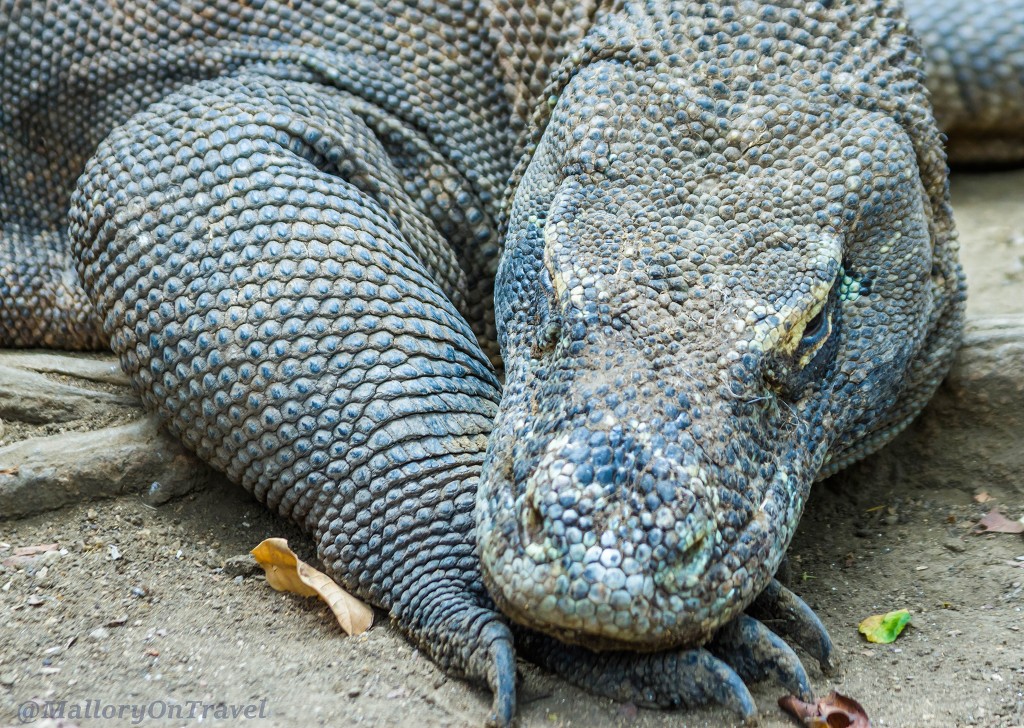 Although they weren’t the most animated subjects, it was still an amazing encounter with one of the planets most iconic creatures, another David Attenborough moment to be treasured and remembered forever.

There are hundreds of islands in the Komodo archipelago, which is just a fraction of the 17,508 islands which make up the Republic of Indonesia. Each island seems to rise straight out of the sea, with jagged high peaks above white sand beaches with gently curving half crescent bays. 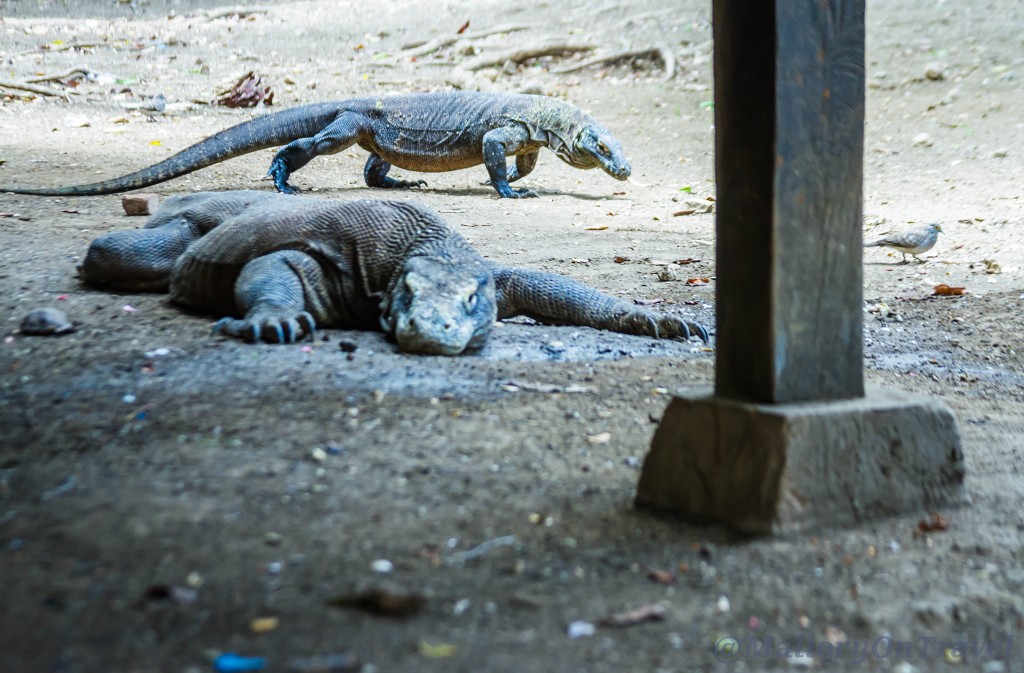 Look they do move!

Each island has its own distinctive character, bathed in warm sunlight or painted pink at the beginning and end of each day.

Manta rays frequent the underwater currents between the islands, and is popular with divers. It seemed an equally perfect place to go sailing, island hopping.

Our time in Komodo was over all too soon, a place to be relished which is one of the new seven wonders of the world, a place of dragons! 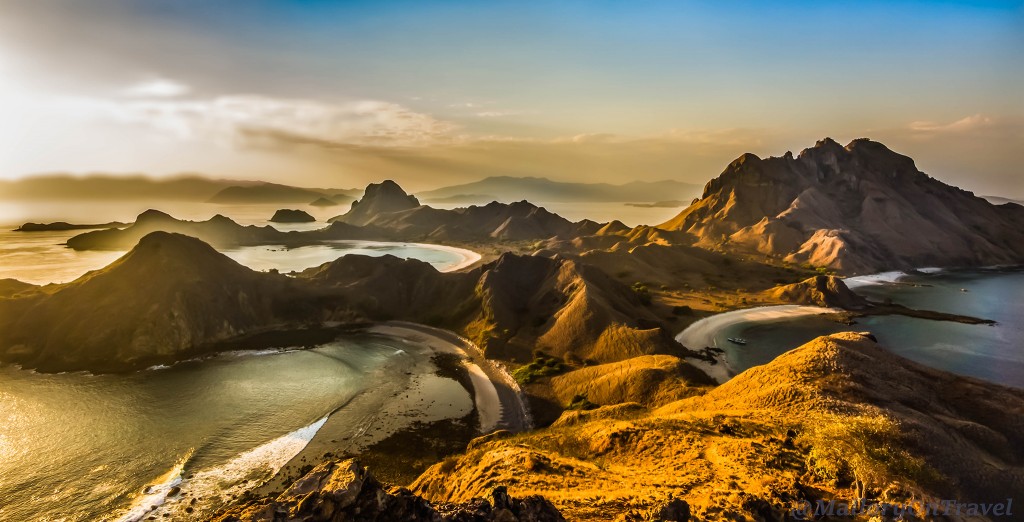 A wonder of the world