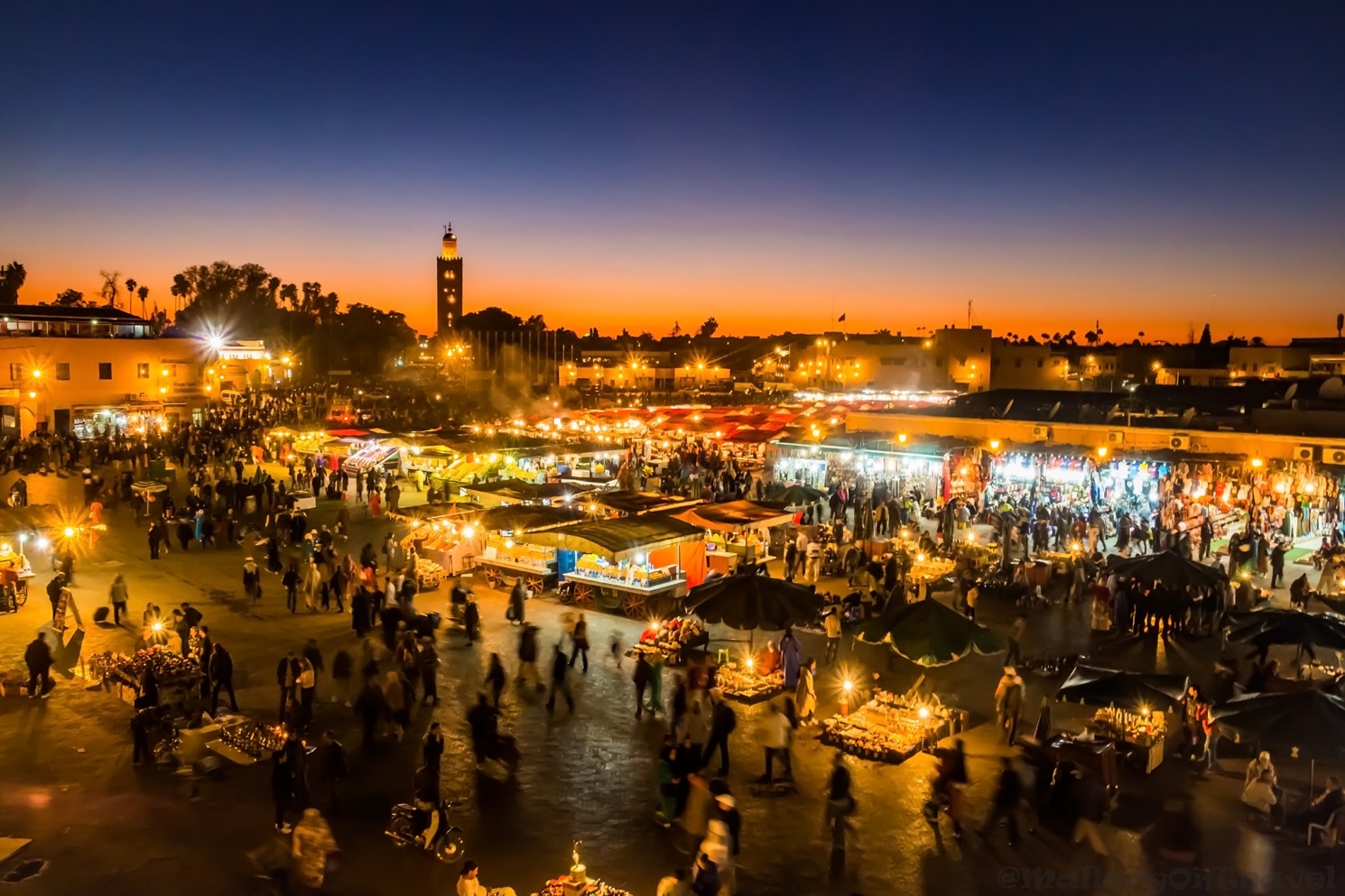 Marrakech, can hit like a hammer blow within minutes of arriving at the airport, but it really hits home, once the taxi parks in the ancient, narrow, side streets of the Medina. Most riads are located deep in the labyrinthine streets, where cars can’t reach, many visitors have heavy luggage and are unaware of how to reach their accommodation, so reliance on the assistance of barrow boys is usually necessary.

The trolley pushing luggage carriers are often the first contact after the airport taxi drivers, but they will be the first of a multitude of offers of assistance during the stay of any foreign visitor to the Medina. 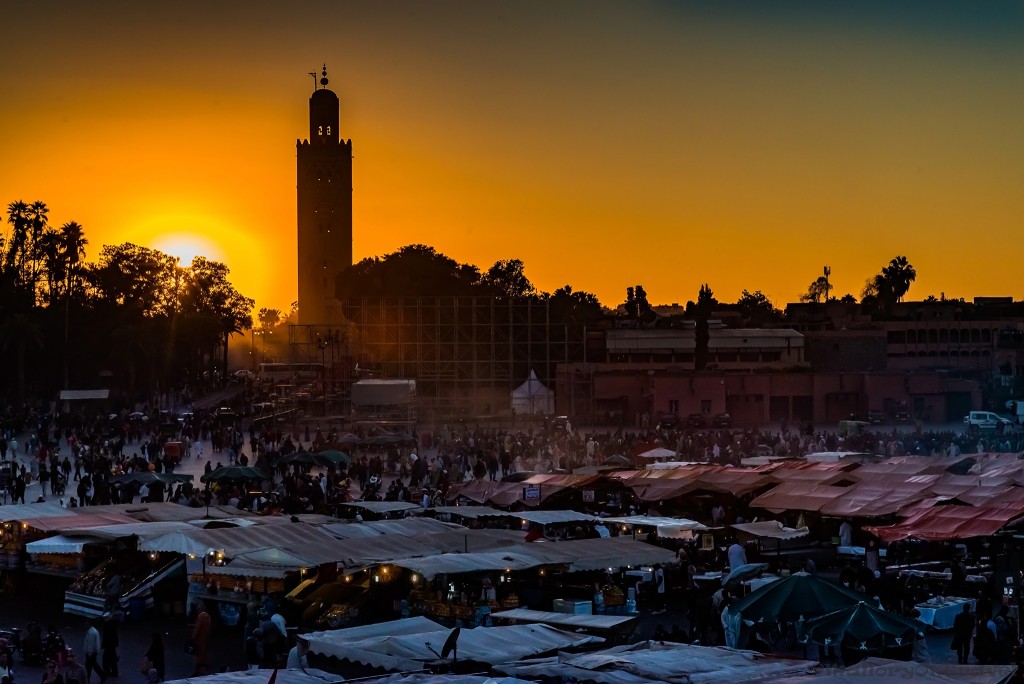 There is plenty to recommend about Marrakech, with a short three-hour flight from the UK including London Gatwick and Manchester it is the closest destination with a culture which is alien to our own.

Beyond the Medina there is a modern city, complete with fashionable hotels, western style residences, chic boutiques and McDonalds, but it’s the souks, artisans and street vendors of the old city, the authentic Marrakech which fascinate and appeal to most. 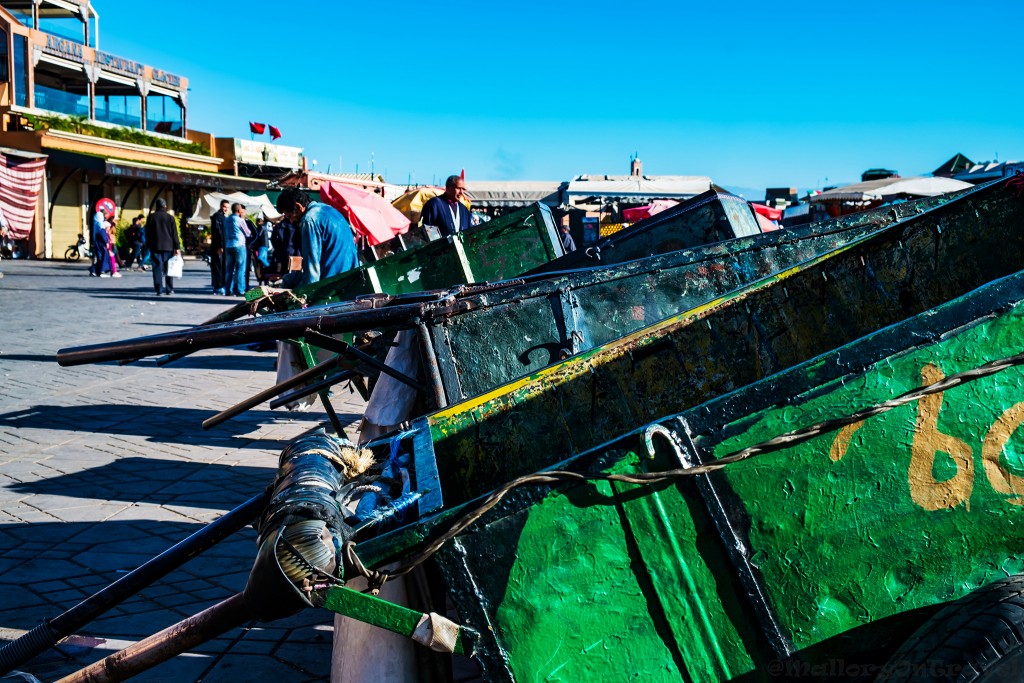 It is a pulsating mix of Berber and Arabian North African culture, where haggling and hustling is a way of life. A chaotic assortment of pavement level street sellers, trading in fruit and vegetables, colourful ceramics or leather goods produced by skilled artisans, backstreet workshops producing vibrantly patterned fabrics or sparkling, costume jewellery and the aroma of spicy tagines sold by vendors to tradesman, merchants and tourists brave enough to try them.

Grubby faced children wearing European team football shirts scurry up and down, some playing football, while others sell packets of paper tissues or pastries to passers-by, still others just hold out their hands for cash. Poverty is prevalent in the Medina, so unsurprisingly is begging, both are everywhere and impossible not to notice.

Being nimble like the cats which scavenge for scraps left out by generous residents, market stall holders or restaurateurs is necessary to avoid the many scooters or donkey drawn carts that travel the narrow streets. The occasional aroma of fragrant spices drift from numerous shops scattered in and around the Medina, with impossibly piled cones of colourful spice mountains, tempting tourists to seek them out. 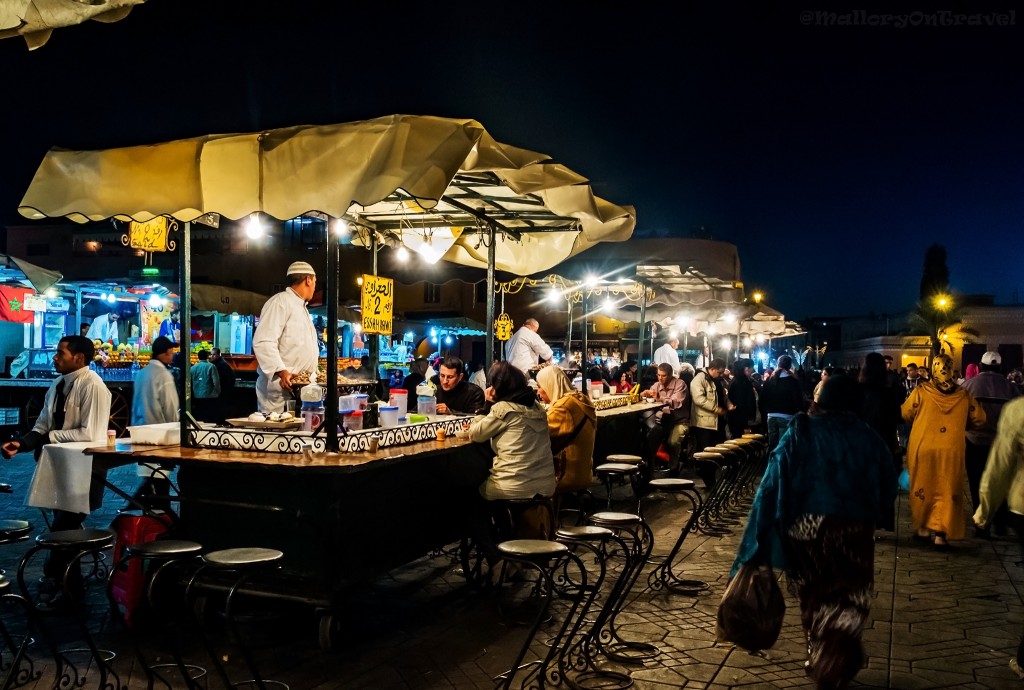 Snail soup sellers on the square

The UNESCO recognised Djemaa-el-Fna is central to the souks, they border it on three sides and it’s a natural over-spill as all routes and signposting eventually leads to the square. A cultural hub where more local vendors congregate to sell their wares, monkey and snake wranglers entice foreigners to pose with the captive animals. Random groups seem to form, small islands of people springing up huddling together and listening to traditional tales related by some of Berber cultures most esteemed members, the storytellers. 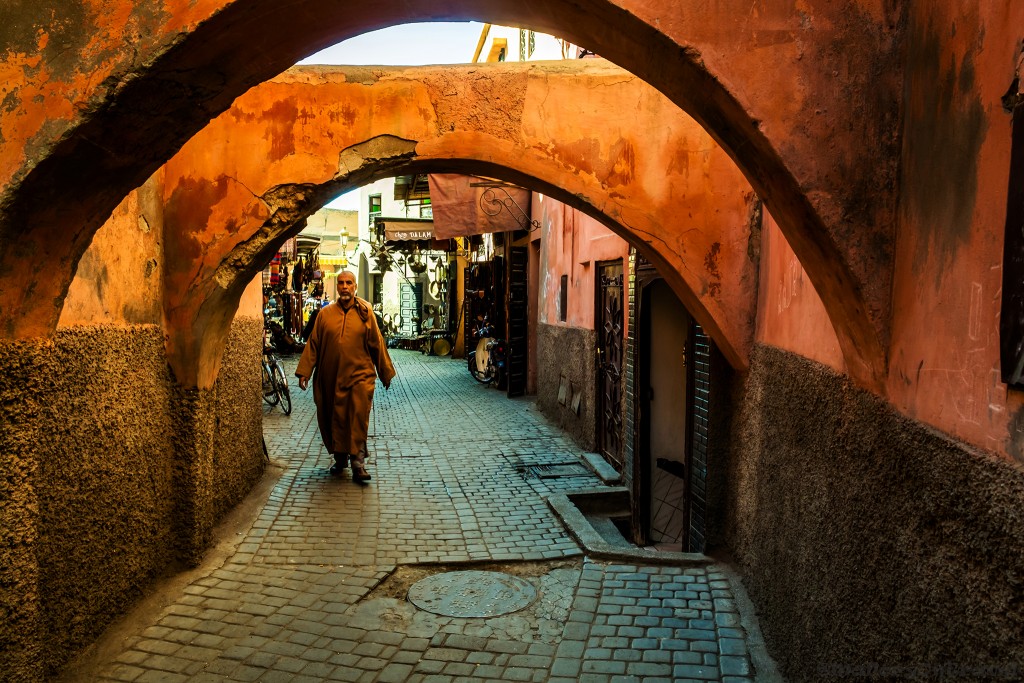 All Roads lead to the Square

Naturally tourists descend upon the famous square in droves, buying cheap, freshly squeezed orange juice from the lines of merchants which border the square, browsing the merchant’s stalls or taking refuge in the coffee shops from the constant barrage on their wallets.

Marrakech is an acquired taste however, there are plenty that suffer from culture shock, unable to cope with the poverty, and the persistence of vendors, beggars or those offering assistance even if it’s not required. 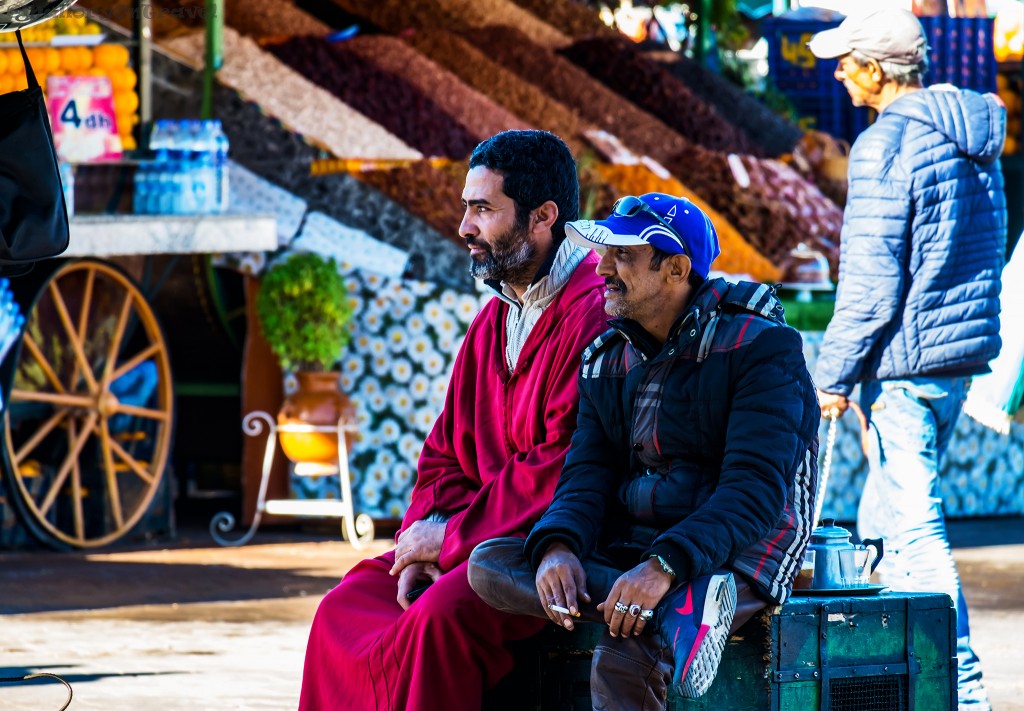 This can become tiresome, even for seasoned travellers, and despite legislation to protect tourists from aggressive merchants, their attention remains determined, in fact since my last visit the situation seems worsened. It almost seems that on every street corner, every turn there is a hawker or a local offering to help find the square or your riad. Remember nothing is for free here, despite their insistence otherwise, there will always be a charge. 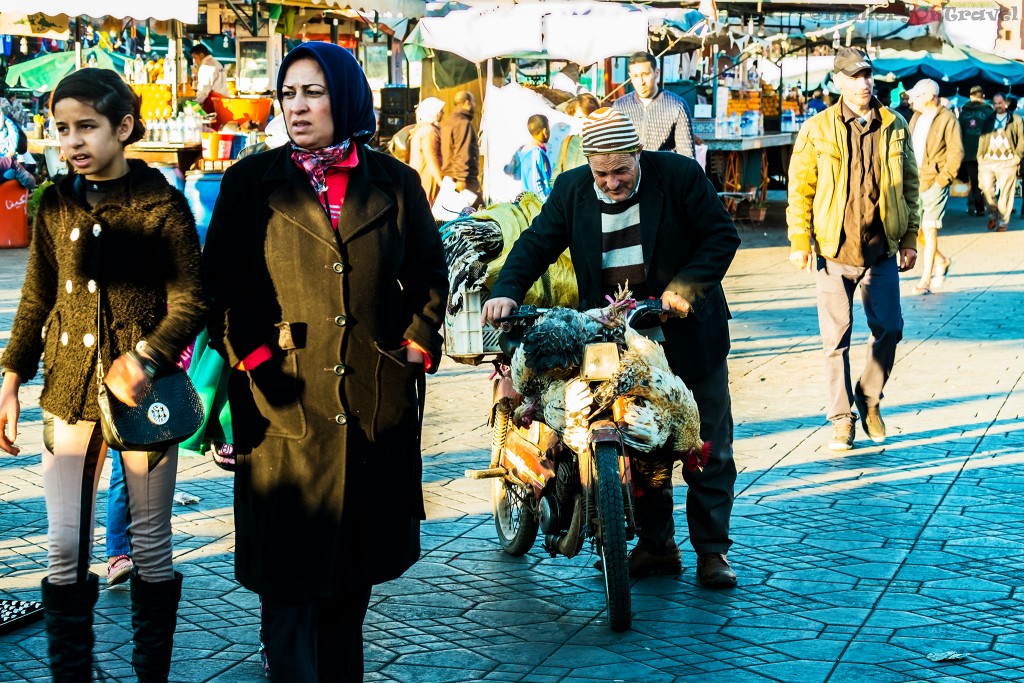 It is a shame, appearing to adversely affect tourism at least minimally. I met a couple that had booked two weeks in Marrakech, even paying for accommodation in advance, but after just two days were moving to Essaouira, unable to cope with what they perceived as harassment. There was also a young German girl, coming to the end of four months travelling around Morocco, but she’d only been able to cope with one night in Marrakech.

“Thankfully this isn’t typical, there are still plenty fascinated enough by the culture to find the attention little more than a necessary inconvenience. After a few days, becoming accomplished at shrugging off even the most persistent hawker.” 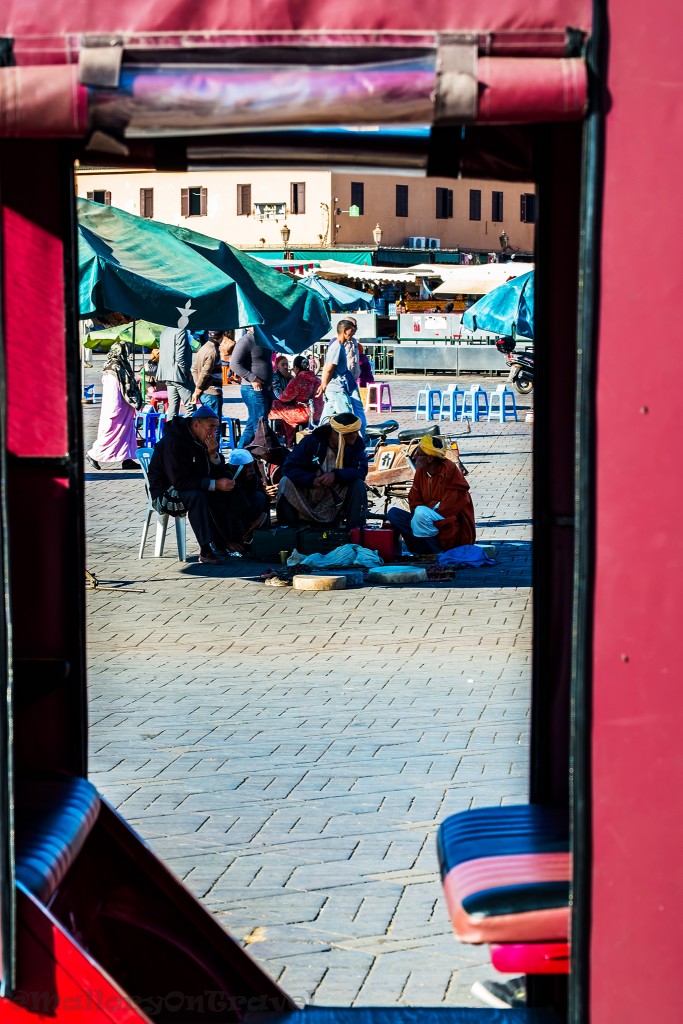 The best course of action is generally to continue in an equally determined manner, displaying indifference and replying in a polite but firm tone. Do not pause or dither as this will be interpreted as accepting their offer of assistance. Do not become abrasive or aggressive as this often escalates matters, with other locals becoming involved.

The riads are often a welcome sanctuary from the Medina, often hidden behind heavy, arched, wooden doors they are usually impressively luxurious but priced as budget hostels. I was fortunate enough to stay at two lovely hostels, Riad Star and Riad Cinnamon, which are part of the Marrakech Riad group. Well appointed, beautifully furnished with hamman facilities, rooftop terraces and a friendly, helpful team, they’re slightly above hostel prices but then they offer private rooms rather than dormitories.

They even provide guests with a local mobile phone in case they get lost, call the riad and a team member will come and guide you back, how cool! There’s also a very useful app, called Hip Marrakech it’s a great tool for navigating the Medina, finding souks, places to eat or attractions and worth downloading on arrival. It might even avoid that first encounter with the barrow boys!

It’s about Getting Lost

Getting lost in the souks is part of the charm of Marrakech, spending a morning or afternoon just dawdling around the Medina, wandering aimlessly down unnamed streets without any need to hurry or desire to find anything in particular. Just enjoying the culture, the surprises around almost every corner, there’s always plenty of time to find the square, why rush?

If a little more structure to the exploring is required, there are a number of colour coded tourist routes available. Each tour is designed to be walked and has a theme, following a circuitous route linking areas of interest related to a specific handicraft.

As the sun begins to descend, so do the tourists on Djemma-el-Fna as watching sunset over the square is an experience not to be missed. However, picking the café with the best terrace view and obtaining a front row seat takes a little planning. Visit the café early in the day and reserve a table, it’s not necessary to eat there, though often favourable, but drinks and a suitable tip will be expected, a small price for the best view in town. 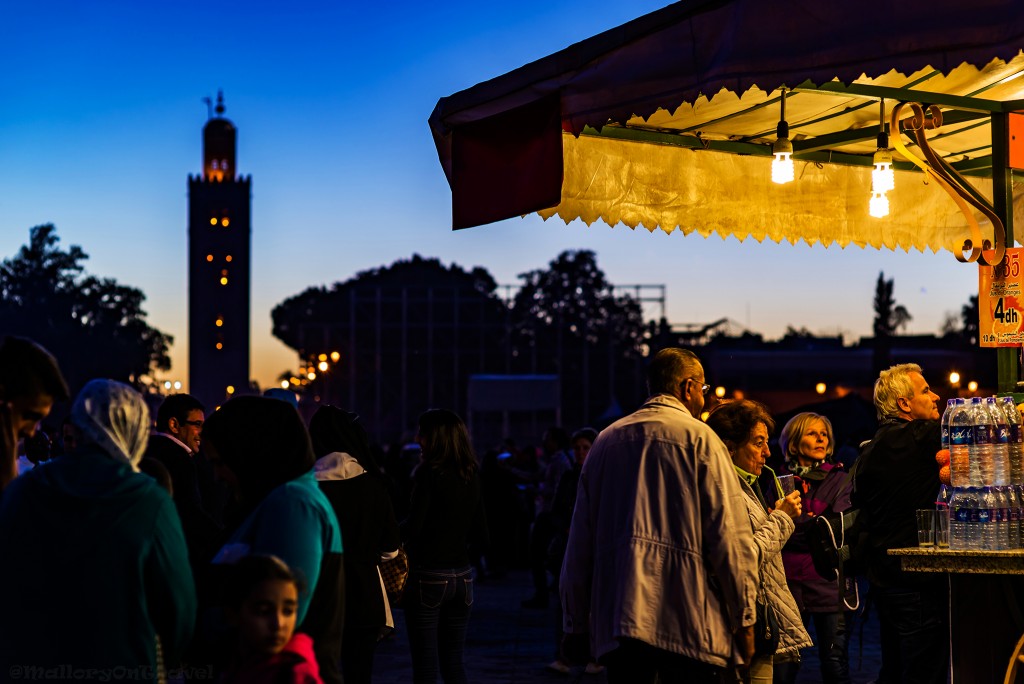 The Koutoubia Mosque at dusk

Photography is a challenge in Morocco in general and Marrakech in particular, which is frustrating as it’s the culture which we travel to experience, and yet cultural photography is the most difficult to obtain. Point a camera in the general direction of any local and it will probably be met with a rebuttal, a request for money or even anger, asking first is unlikely to be met with any significant success. 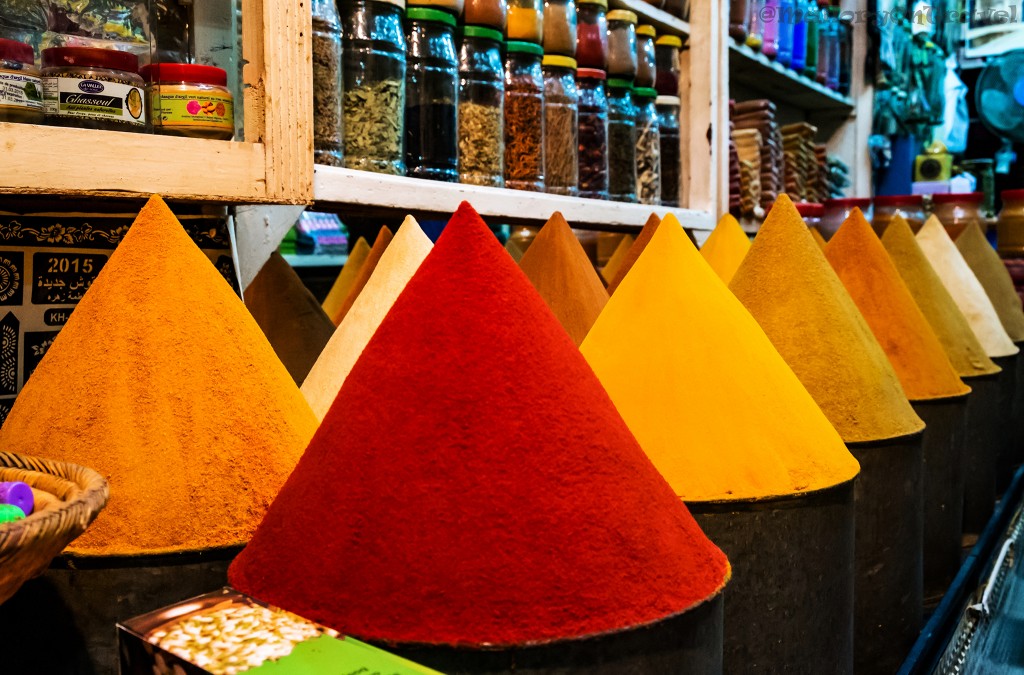 There are plenty of performers, professional ‘models’ which are happy to pose for payment, but the result is not likely to produce an outstanding street photograph! 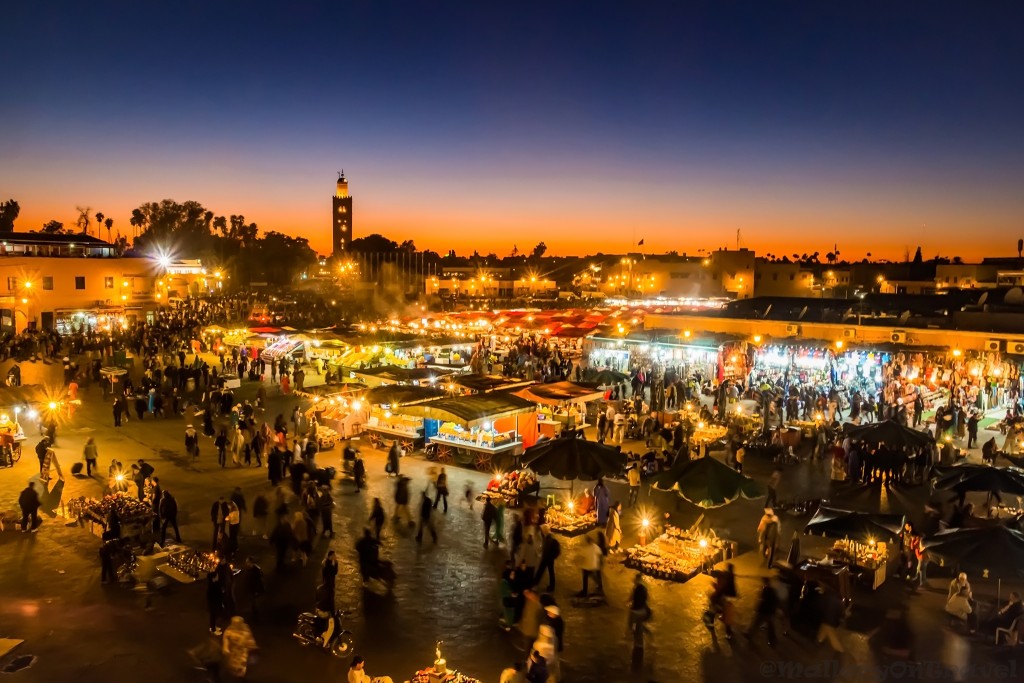 An active Djemma-el-Fna at twilight

Engaging a trader in conversation and making a purchase is one approach which often produces some positive results, and general photography in the souks is usually tolerated, but candid portraiture is certainly a challenge. Shooting from the hip can be a bit hit or miss, but sometimes it is the only way to capture some street scenes in a destination where resistance to photography is less cultural than financial issue.

The following video was shot on hand held or chest strapped GoPro.

Morocco offers one of the most stable and safe North African destinations to visit, a fascinating, vibrant cultural experience for those prepared to accept the challenges that this experience brings.

Marrakech is one of the most accessible Moroccan towns, with a number of historic and impressive attractions to visit, but ultimately the draw of the Medina and the joy of souks is irresistible.

A short break of two or three days is sufficient to fully appreciate a culture which has the capacity to enthrall, fascinate, excite and yes shock. Combine an excursion to the Sahara, a few days in Essaouria or for the more adventurous possibly Chefchaouen or Fes and enjoy the best of Morocco.

Check the terms and conditions prior to booking for baggage allowance and additional booking fees.