It wasn’t until the city of Whitehorse had long disappeared from the rear-view mirror and miles of pine tree lined open road stretched out before the vehicle that The Yukon began to feel real.

Whitehorse had been a fleeting layover, having arrived late the night before and, the following morning, with time against me enjoyed a small mountain of pancakes and a coffee for breakfast in the coolly named Best Western Gold Pan Saloon. Shortly afterwards, all the gear was thrown into the back of the huge GMC Suburban and the road trip was underway. 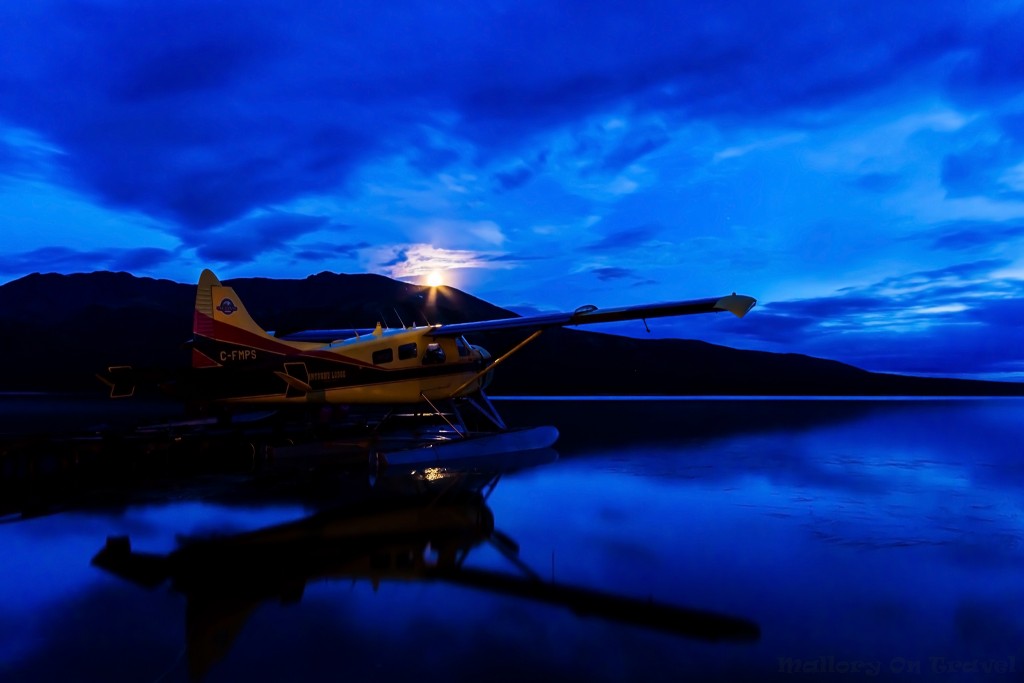 An adventure waiting to happen

The initial impressions when seeing the vehicle had been “why?” It seemed over-kill, just me and my gear for a twelve-day road trip. However, I’d soon appreciate the benefits of the huge tyres and grip on the many rough, often treacherous tracks in remote areas, where breaking down or a puncture would be a major disaster. Huge it may have been, white it certainly was, but white elephant….. definitely not in this country.

Although only a little over an hour from Whitehorse, it was necessary to refuel before leaving the Alaska Highway at Johnson’s Crossing, as there wouldn’t be any further chances on the dirt track Canol Road. This is an important consideration; fuel stops are few and far between, so refuelling whenever possible is just good sense. 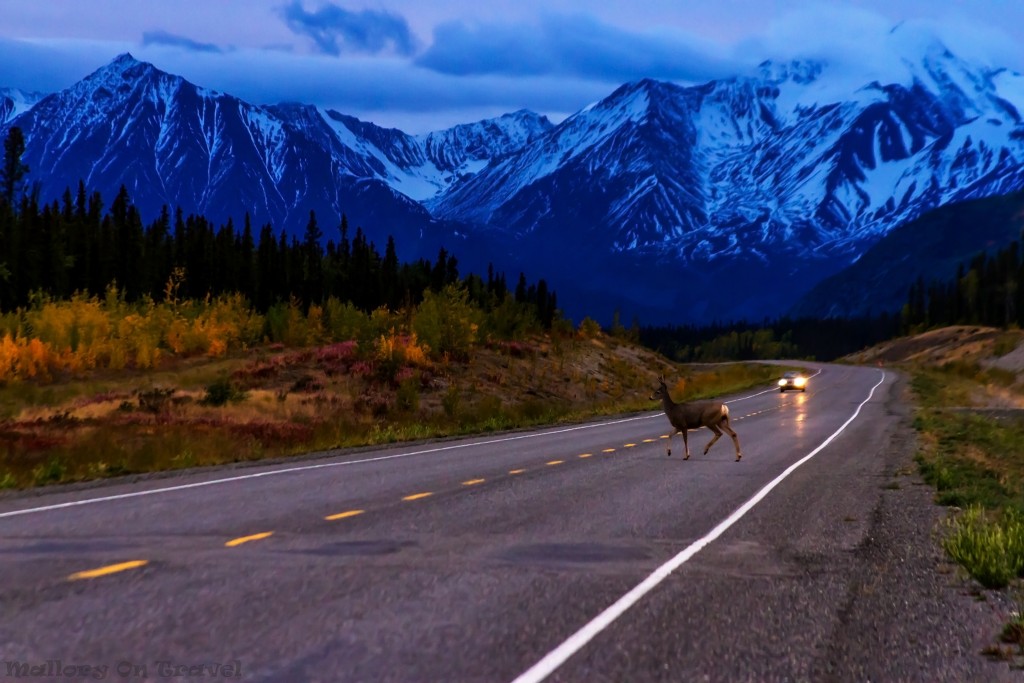 Not a zebra crossing!

Just before the road begins, a small graveyard of several long, abandoned vehicles appeared. They are the remains of military and construction vehicles which were left behind once the road was completed. Built during World War II, to service an oil pipeline, which no longer exists, the vehicles mark the start of the road. Rusting and dilapidated they have become a part of the landscape. Nature has claimed them, with colourful, wild flowers growing in and around them, The Yukon was becoming even more real. 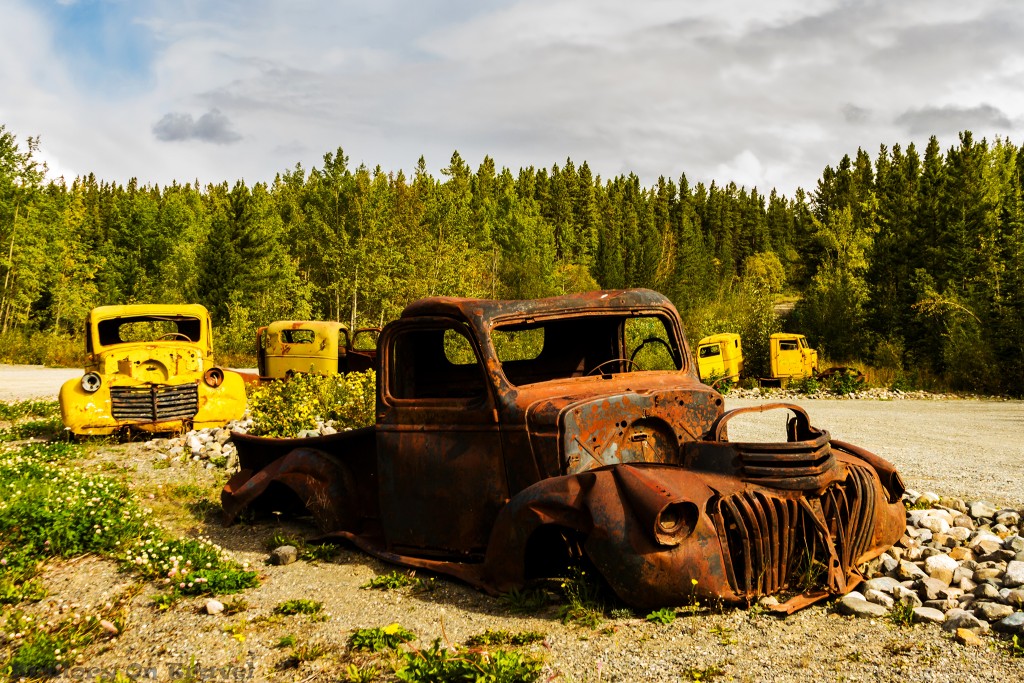 Also known as the “Canol Heritage Trail” cutting through the wilderness of the North West Territories heading towards the Ross River. A picturesque drive along a tree lined dirt track, usually with a lake or river alongside and surrounded by mountains it’s possibly the most pleasant seven-hour drive I’ve enjoyed.

However, I was on the clock, needing to catch a Beaver flight from Findlayson Lake to Inconnu Lodge in the early evening. Not sure what to expect, how big the airfield was or if there was an arrival or check-in time, so felt the need to step on the gas a little. 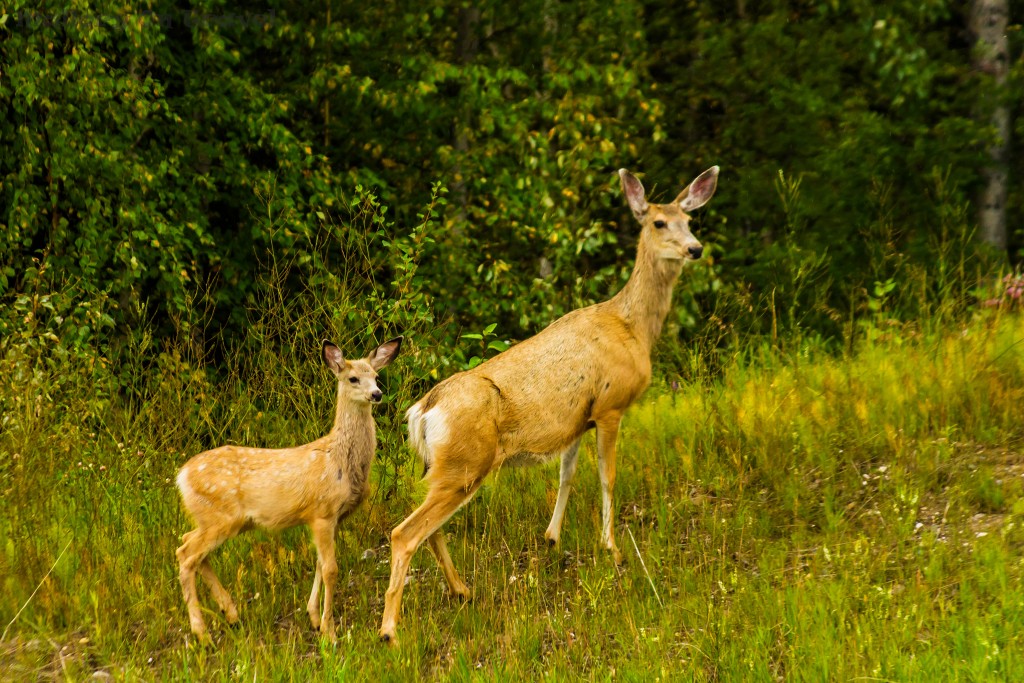 On arrival at the small Kluane airfield, these concerns were blown away by the words of my pilot “are you my passenger?”. This short sentence seemed to set the tone for the remainder of the stay.

I don’t claim to be any fisherman and certainly not a hunter, but felt totally at home as soon as the float plane landed at Inconnu Lodge on the shores of McEvoy Lake.

The North West Territories is a true wilderness, thousands of square miles dotted with freshwater lakes and criss-crossed by fast running rivers where trout and grayling swim. Mountains shelter almost every lake, some with precipitous cliff faces, including the nearby “Cirque of the Unclimbables“, which despite, or maybe because of its name is a popular, though remote destination for climbers.

Moose, bear and even wolves roam throughout the territory, and although it’s possible to hear howling wolves at times, seeing the elusive wildlife is an entirely different prospect.

An extremely pleasant, and restful stay in the company of owner Warren and his team will be the subject of another post.

Suffice to say, when it came time to take the final Beaver flight out several days later, it felt like leaving home behind, and it was with a slightly heavy heart I turned onto the Ross-Campbell Highway towards Watson Lake. 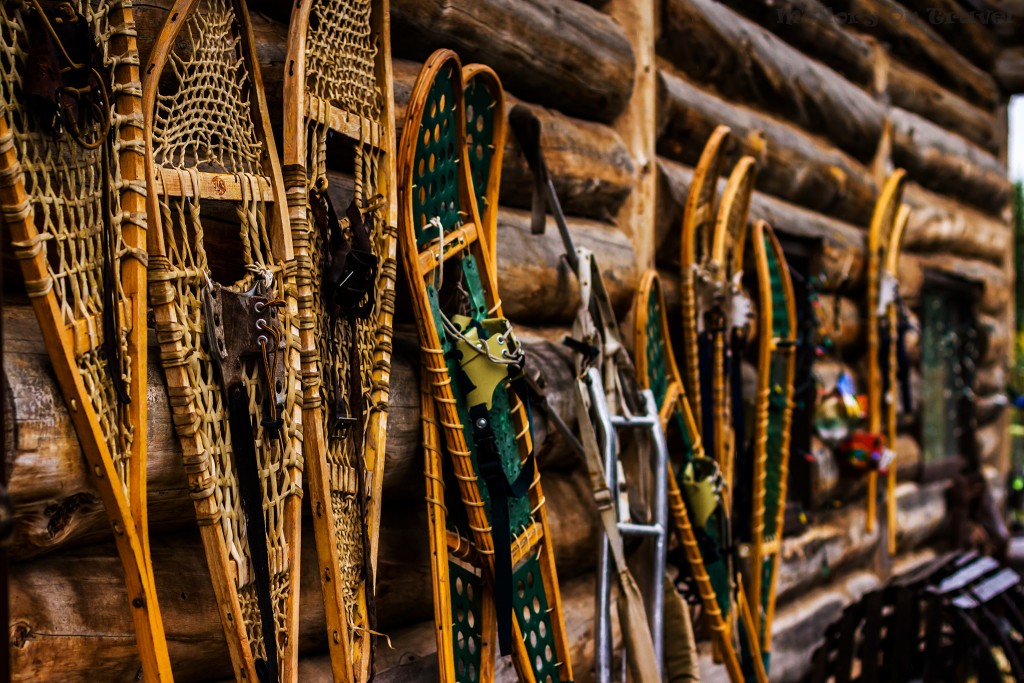 This community is famous for the Signpost Forest which was started in 1942 by Private Carl K. Lindley, an Army engineer who erected a sign from his hometown of Danville, Illinois. Since then, people have visited from all over the world, erecting over 72,000 directional signs from their hometowns.

I was graciously hosted by John Studenberg and his wife during my visit, even inviting me around for a tasty dinner on my first evening.

They appear at first sight a normal middle-aged couple, just like the neighbours next door. However, they have a trapping cabin, which is so remote it requires a float plane to access it, good job they have two then! A picture of Mrs Studenberg standing next to a huge moose which she shot adorns the wall. Probably a typical Yukon couple, but not sure my neighbours would feel at home here!

Taking the opportunity to sneak into northern British Columbia, supposedly to visit the Liard River Hot Springs, but in reality hoping to see some wild bison and other wildlife along the highway. It proved to be a worthwhile diversion, with dozens of bison along with a couple of whitetail deer next to the highway.

Before returning to Whitehorse via Teslin, with some improving weather it seemed appropriate to grab an image of the old, photogenic Watson Lake Service Station, while snapping away a guy in a pickup pulled up. Winding down his side window, he stated, rather than enquired;

“You must be the guy from Great Britain”, it seems I was the talk of the town, such is life in a small community.

The weather generally wasn’t always being kind and a few wet days were spent driving nearly five hundred miles towards Dawson City. Which included a muddy overnight stay at Cathers Wilderness Adventures on Lake Laberge. After a choppy boat ride to the secluded lodge, there was a quick change before hiking with dogs, followed by helping feed them, still can’t figure out how they remember which ones have been fed. Sleeping in a small, individual sized lodge near around fifty sled dogs was an experience to remember. 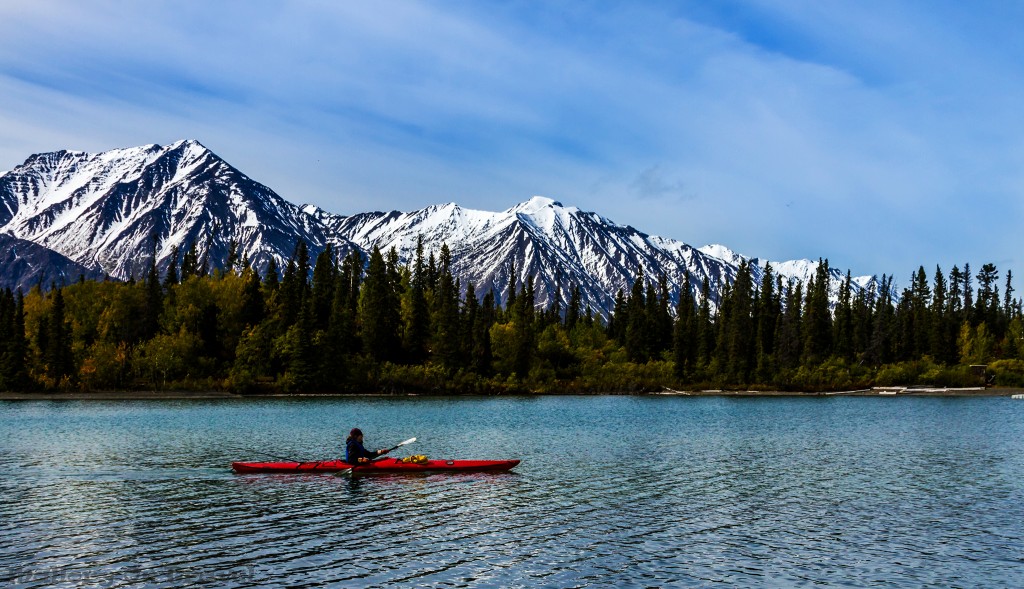 Driving into the old mining town of Dawson City had my pulse racing for more reasons than one, as a few miles out it had been necessary to swerve violently to avoid a large wheel, running loose and aimed directly at the Suburban. It was followed by a rundown pickup minus its rear axle, dragging its rear end down the other side of the road, producing a trail of sparks, like a tarmac comet!

Stopping to check the driver was uninjured, he informed me, totally unconcerned, “I’m ok, it’s not the first time it’s happened”. The mind boggling assumption is it’s a common occurrence!

The old frontier style architecture of Dawson City was the other cause for excitement, and staying in Bombay Peggy’s, one of the town’s old brothels only added to the appeal. The town has a fascinating history, most of which were discovered during a walking tour. An informative guide provided some valuable insight, entertaining anecdotes about the town and ample opportunities to smile.

The sunset view of nearby Tombstone Territorial Park and the Klondike River from Midnight Dome was another highlight of the road trip. The distant peaks glowing crimson in the dwindling light.

It was also worth taking the short drive to see Tombstone T.P. from ground level, even if I was wearing sandals and there was already snow on the ground in September. This provided some bemusement, or was it amusement for the sensible, heavy, hiking boot wearing visitors. 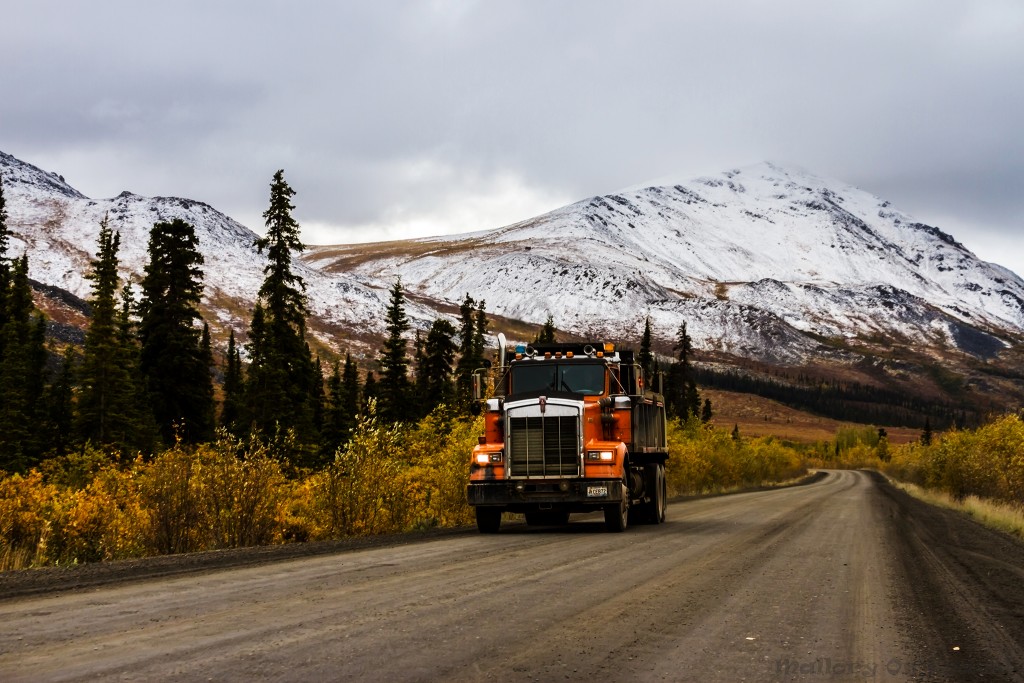 This was also to become a feature of the trip from here onwards, snowy covered mountains and autumnal colours in the valleys below. It made a pleasant change, provided some stunning scenery, regular stops and occasional detours to take photographs along the route.

Crossing into Alaska to take the spectacularly named “Top of the World Highway” lived up to the billing, and Kodak moments were impossible to resist. 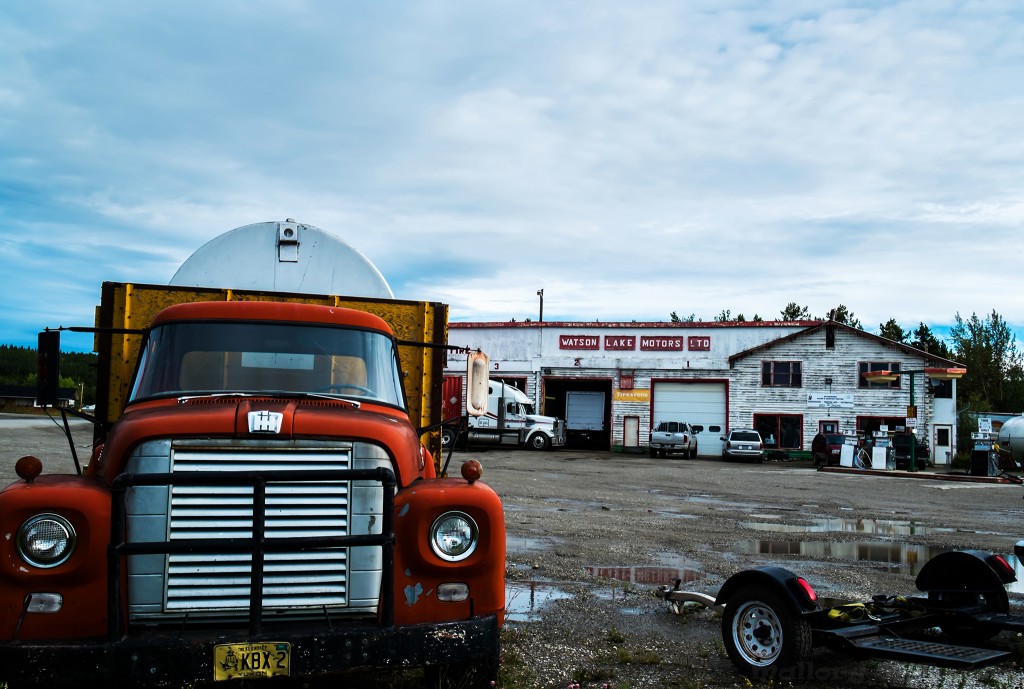 The border crossing required purchasing a visa, in US dollars, there wasn’t a card machine available and dollars of the US kind were equally unavailable. This caused a few anxious minutes until the border patrol officer relented and allowed me and several other travelers to continue on our way.

The highway is nothing like the miles of tarmac which we take for granted, barely more than a dirt track, narrow in places with some steep drops and without barriers, required some careful driving.

It was also noticeable how many hunters there were this side of the border, roadside campsites and lots of khaki clad, bearded men carrying rifles, it seemed a pretty serious place. Then I arrived at the town of “Chicken” Alaska, and all pretense at seriousness disappeared, I mean who admits they come from a town called Chicken?

The final planned stop was Haines Junction and Kluane National Park where some wildlife spotting was in the plan. So far, apart from some moose from the air, the bison and the odd scurrying porcupine it had been conspicuous by its absence. This is the way of the wild, it’s wildlife, which doesn’t appear on demand, it’s unpredictable, but in the grizzly capital of the world, optimism reigns supreme.

The drive to Haines Junction was broken up by the bizarre sight of a unicyclist struggling against strong winds along the way. It’s a long drive in a vehicle, on a bicycle ambitious, but on a unicycle, wow, hats off to the intrepid traveler. Apparently he’s Zero Point Sid who was making his way from Deadhorse, Alaska to Butte, Montana; crazy, but admirably crazy! 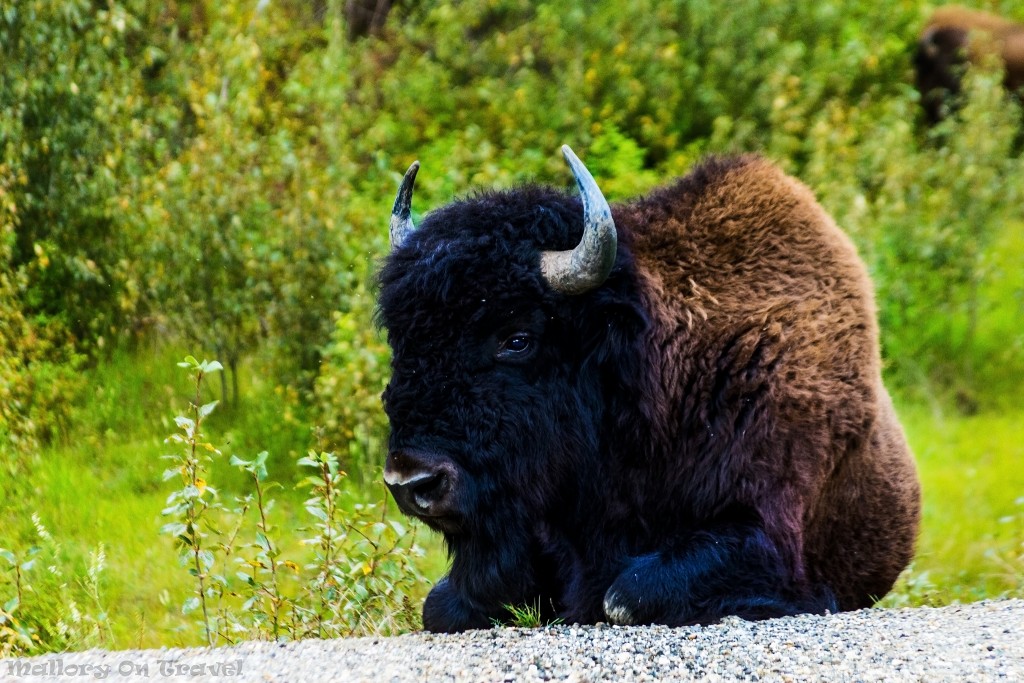 Unfortunately, my wildlife spotting optimism wasn’t to be rewarded, apart from a few spawning salmon and a kingfisher luck wasn’t on my side. Even cancelling a scheduled walk around a lake to take a trip to visit nearby Klukshu village, a seasonal southern Tutchone camp near the Klukshu River and off Haines Road. A ranger had helpfully informed me that bears had been spotted fishing for spawning salmon there. Putting myself in the right place, at the right time, seemed smart, but alas to no avail.

I did meet a man and his wife butchering a moose, not my preferred way to see one, but an unexpected cultural meeting all the same. Hunting may not be to everybody’s taste, but respecting their culture and that this meat would feed their family through the winter, it was ok with me. The villager was busily tidying up the head, but was happy to pose for his picture to be taken. 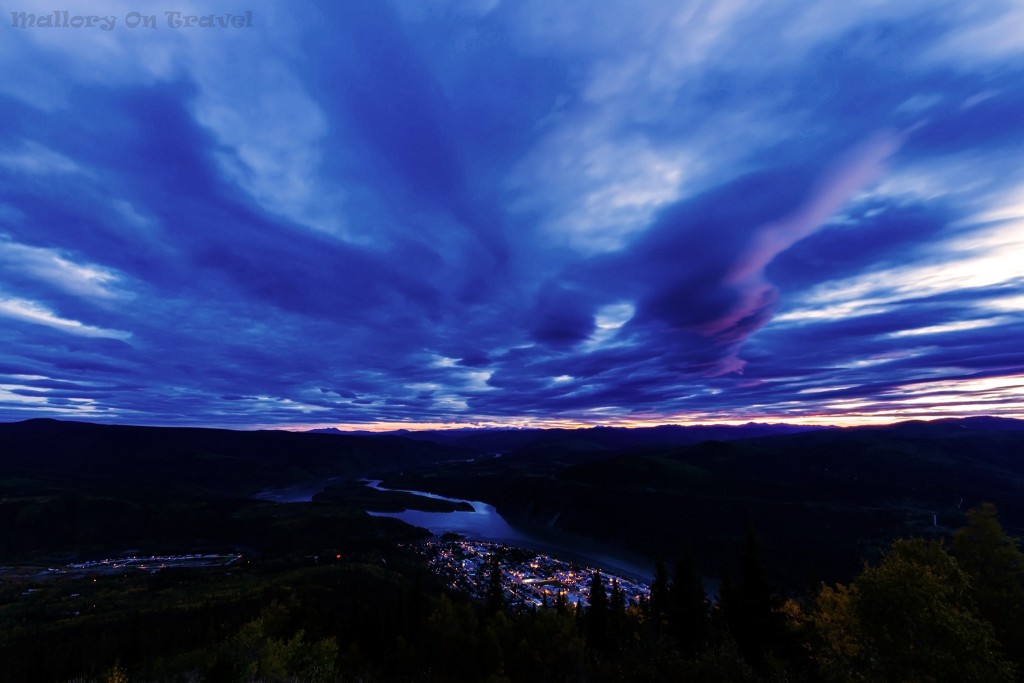 A live moose did finally cross my path on the final morning, having started early to fit in another diversion on the way back to Whitehorse. It ran across the road about fifty metres in front, diving quickly into the forest out of sight.

So, flushed with success, it was soon time to return the rental ‘bus’ and board a flight home, filled with memories of two great weeks on the road. 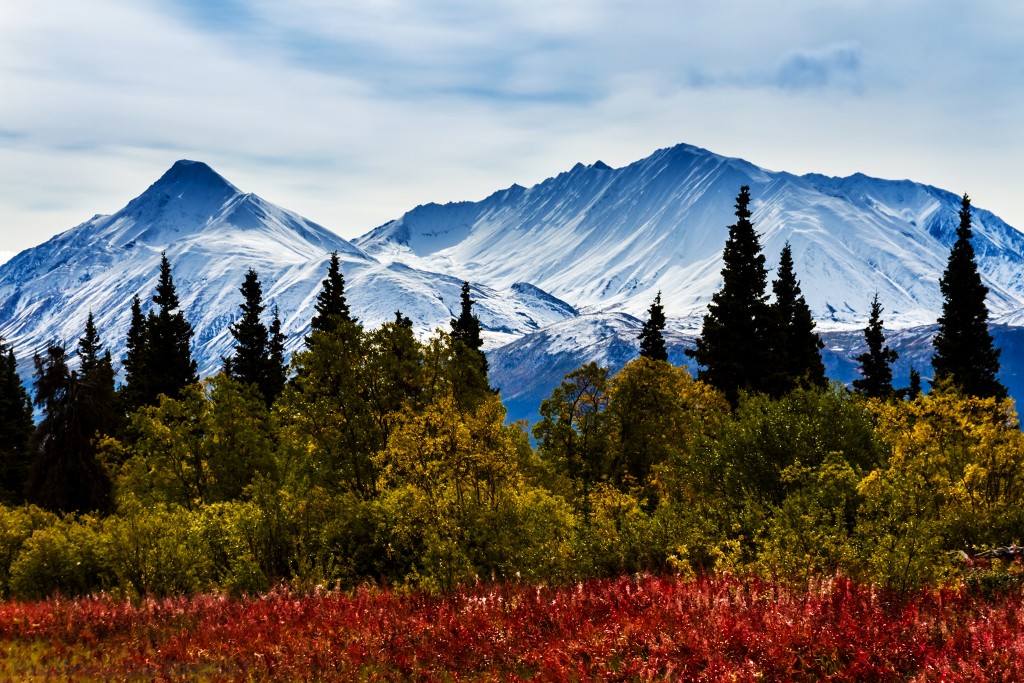 This is The Yukon

The United States may be credited as being the birthplace of the road trip, but its Canadian cousin has an extensive network of open roads worth exploring. The Yukon is a wilderness area, with relatively quiet tracks and roads which seem to stretch forever, stunning scenery, wonderful if elusive wildlife and plenty of tales to share; in fact, what else do you need for a road trip?

Oh, there are enough bars and truck stops to get beer too!

One man, one wheel, one adventure