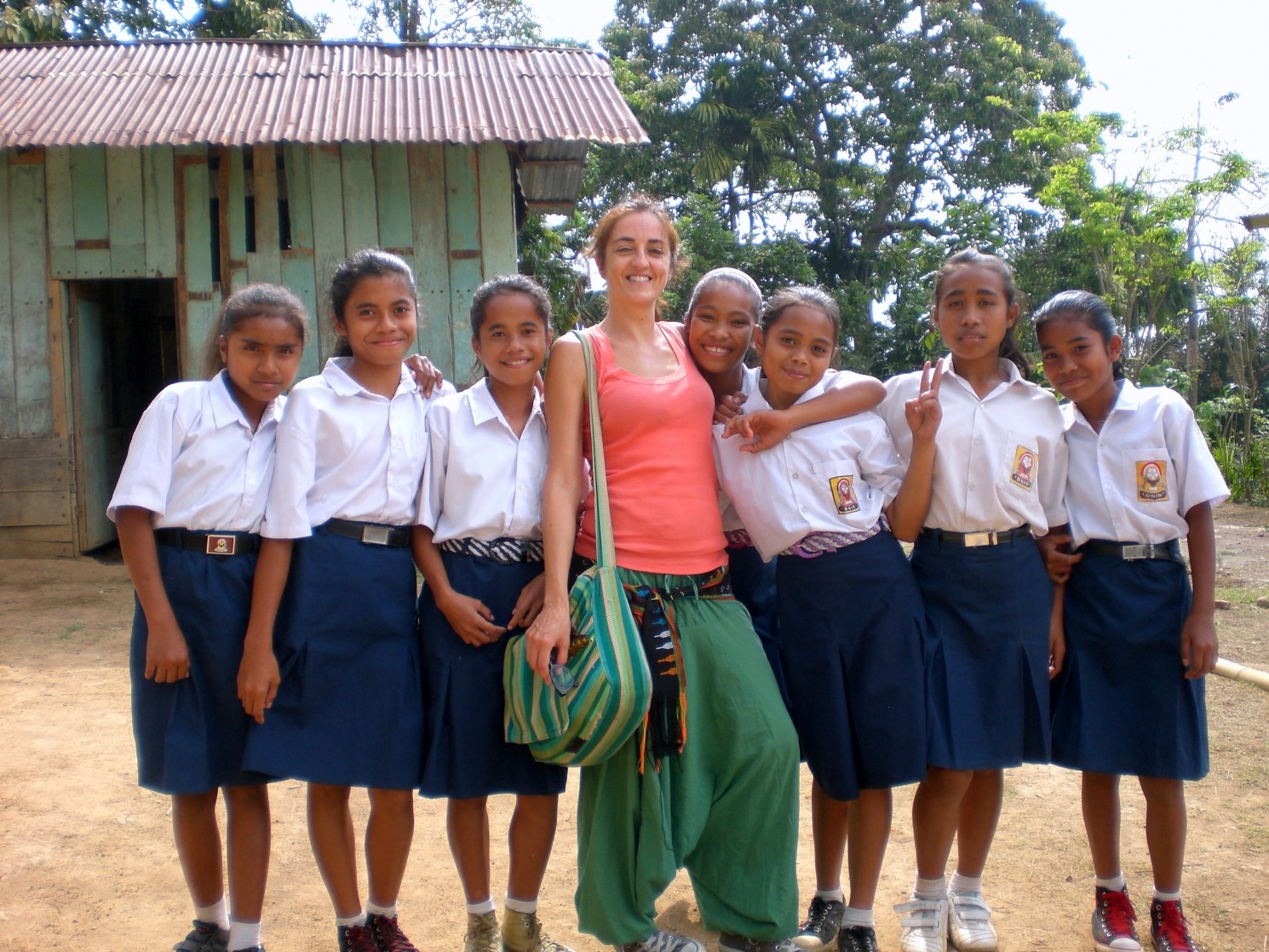 I could write numerous posts on the marvels of Indonesia, about the fantastic places visited there, on the many adventures and misadventures had.

Yet, after leaving this incredible country, it was the smiles of the people I brought back with me. Never, in my sweetest travel dreams, had I imagined that such warm hearted, kind and friendly people could exist; and I have travelled a great deal!

Regardless of the location, the crowded Bandung, the lively Yogyakarta, the wild Komodo Islands or in touristic Bali – I was made to feel welcome. Although, there was an element of culture shock throughout my time in Indonesia. 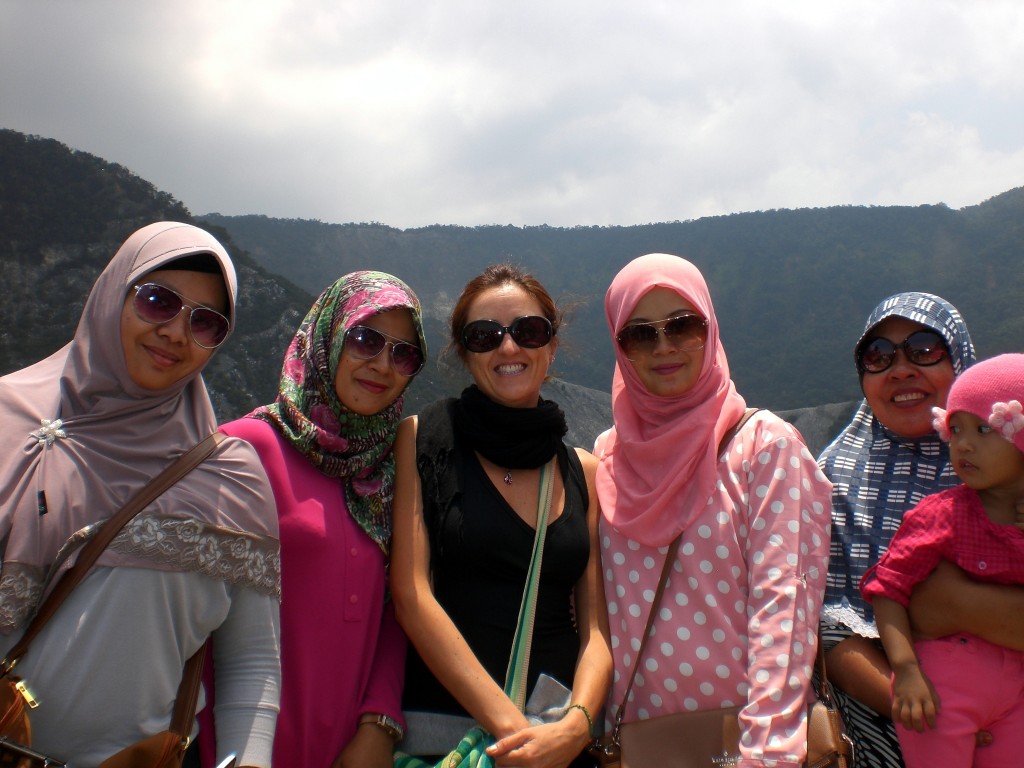 Me and my new girlfriends at Tangkuban Perahu

This was in fact my first time in Asia, and never having visited such a crowded country before. Prior to visiting, I was totally unaware that Indonesia is the fourth most populated country in the world; and let me tell you, it surely shows.

There are people everywhere. Traffic is insane, even when compared to Italy, my home country. Countless scooters zip and weave down every street and alley, carrying up to 4 passengers glued together, babies often strapped to chests.

So many people should have been overwhelming, even suffocating; I was indeed suffocated, but in an entirely positive way.

Everywhere, I was greeted by smiling, inviting faces of people who were eager to share the experiences of their daily lives. They politely asked questions, hoped I was enjoying their country and oozed affection.

My first encounter with the local people was at Tangkuban Perahu, the huge crater of a volcano. As one of Indonesia’s most popular attractions, thousands of tourists crowded there. Most were Indonesian.

Soon after stepping off the tour bus and making my way to the crater, a group of women stopped me. They pointed at their phone.

Big smiles as an answer. As I propped to take their pictures, they protested. I could not understand them.

Then a guide approached and said: “They actually want to take a picture with you.”

I thought it was really funny and even a bit weird, but was happy to pose with them. 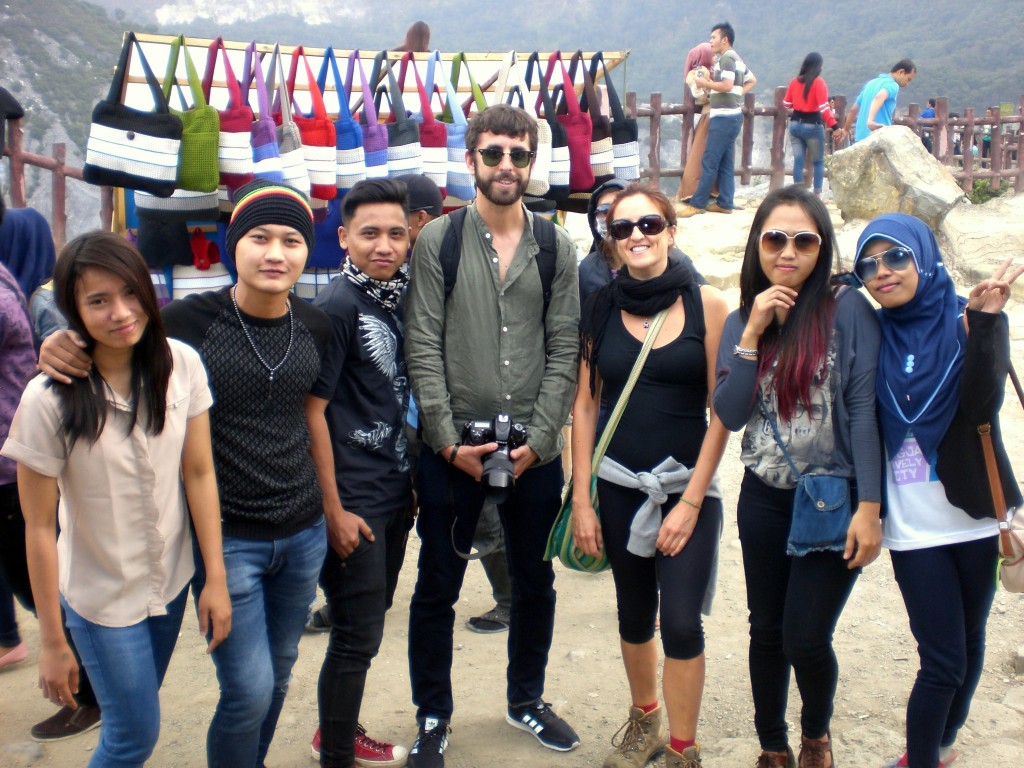 Kool and the gang

Remembering the many blogs and articles read which suggested an etiquette in photographing locals and provided advice on asking permission to take pictures. Yet, here I was, not only did these women want a photo, they wanted me in it!

The same scene repeated itself again a few times within the hour spent at the site. 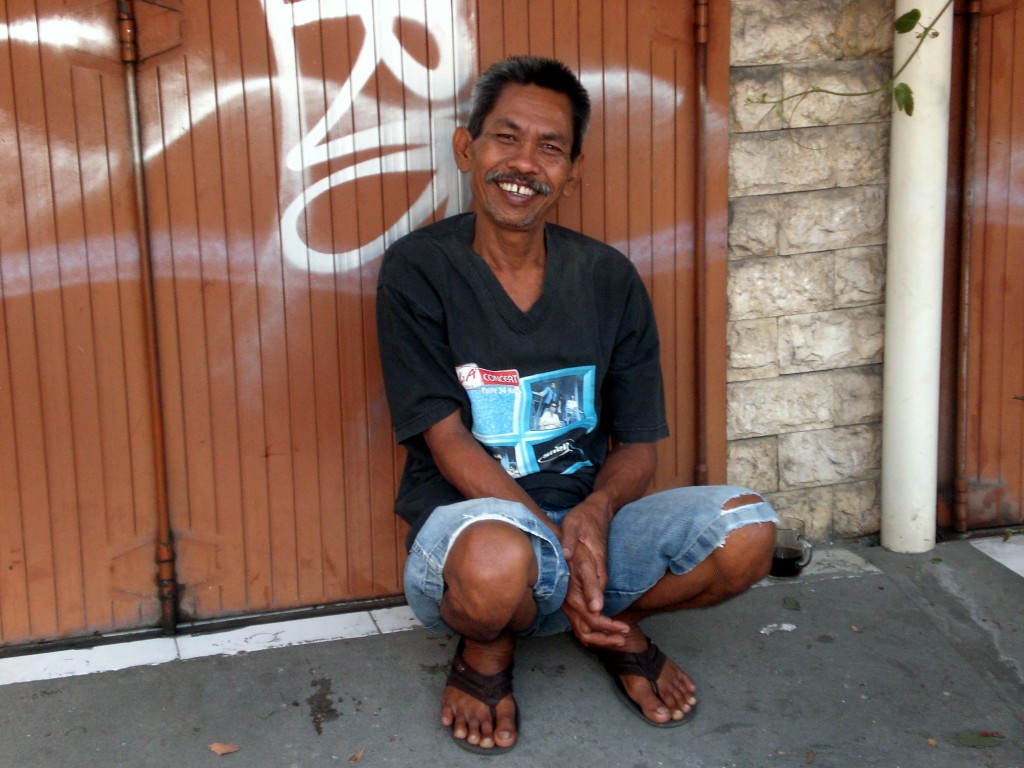 Feeling confident that photography was not a taboo, I was comfortable asking and every time the response was so positive somebody would come stand close, keen to have a picture taken with me on their phone.

In fact, this was usually their only condition.

One man asked me shyly “Miss, can I take a picture with you?” in the Royal Palace. The next thing I knew, there was a line of men waiting to pose for a photo with me. It was my time to shine and feel like a rock star!

A common aspect of the many cultures and ethnicities in Indonesia is the fact that all people are friendly.

“United in diversity,” these are the words used by the director of the Saung Angklung school in Bandung. I would also add “united in friendliness.” The show the children of the school performed, was a pleasure to witness and was a perfect representation of the diverse cultures of the country.

Dancing in regional costumes of Indonesia, and playing traditional instruments, the skilled children entertained a delighted audience with a captivating performance, filled with rhythm. Their sweet, genuine smiles were enchanting as they later invited us to join the show.

Arriving at the Komodo Islands, the cultural diversity of Indonesia became clear. An archipelago in Eastern Indonesia that, compared to the crowded rest of the country, seemed to be scarcely inhabited.

The Manggarai people of Melo, one of the villages not far from the main city, Labuan Bajo, still follow a traditional way of life with few comforts. Living in simple houses where electricity is generated through solar power and only available for a few hours each day. They still practice traditional occupations, most are farmers, others make a living distilling the sap of the aren palms, producing a liquor called sopi. 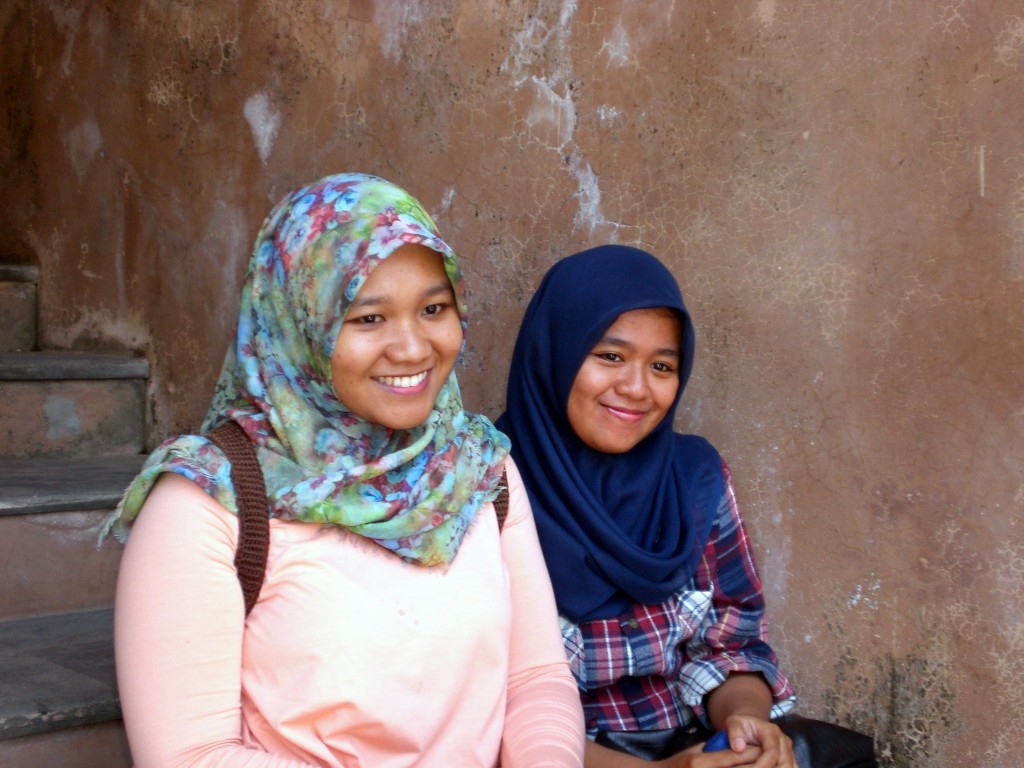 Yet still, the smiles of these hard working, friendly people struck the most memorable chord.

At the improvised visitor centre, our group was offered a welcome drink, a delicious home cooked meal, and an opportunity to participate in the Caci ritual performance. Men and women wearing traditional costume, danced to rhythmic tunes, our performances were less than hopeless

Later, walking down the street, even the betel nut chewing women smiled sweetly, their lips and teeth tinted purple by the nuts. Had I not known any better, it could have appeared almost threatening.

Elderly ladies peeked from behind their doors at the group of strange visitors. Children nonchalantly posed for pictures, apparently oblivious to the attention they were receiving.

A young man invited me into his home. “Come in, miss, where are you from? do you like it here? He enquired. “I still study” he then informed me.

You speak good English, I told him.

“I want to study tourism management” sporting a big smile, followed by a demonstration of how oil is extracted from the nuts that were drying in the yard.

However, it was when visiting the local school, where our group spent an afternoon volunteering that the full smile party got swinging.

The school is supported by Taman Bacaan Pelangi, or Rainbow Reading Gardens, a non-profit organization that aims to empower children by providing them reading books. Hordes of children came running towards us, grabbing our hands, eager to show they could speak some English and staring curiously at us. Their expressions saying it all: “Who are these strange people with pointy noses and thin lips?” “Look at the hair on the face of that guy, I want to touch it!” 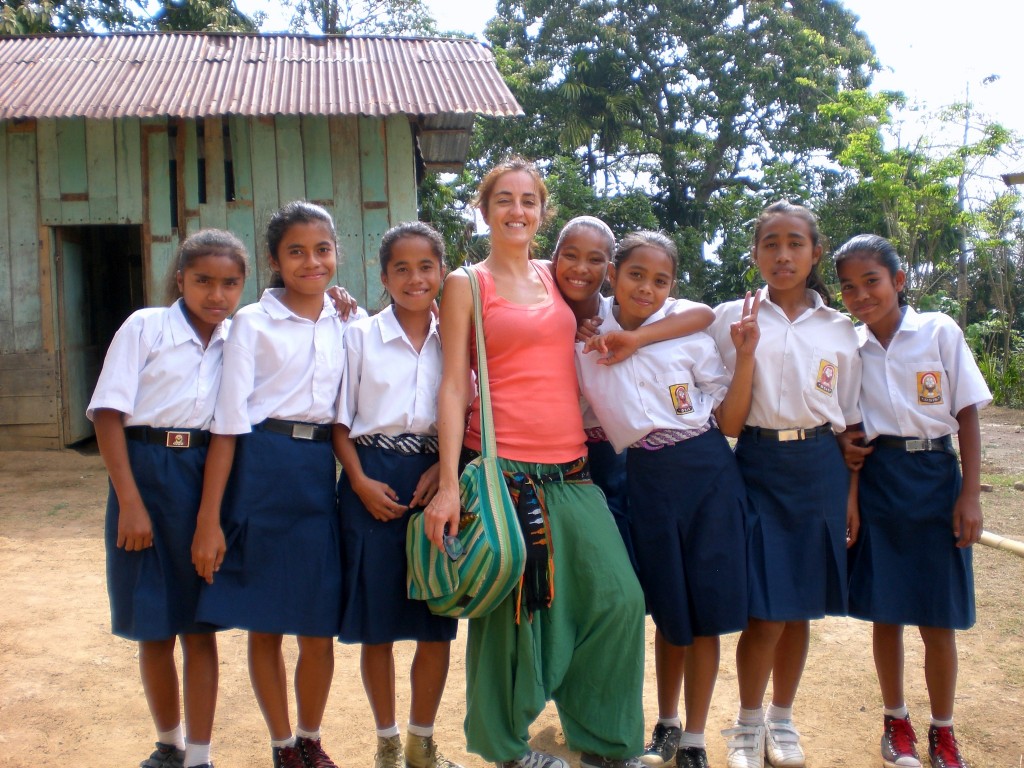 Hanging with the cool kids

They also had plenty of questions.

“Where do you come from?”

“What fruit do you eat in your home?”

“What are peaches?” laughs all around.

Then again: “What do you do in your free time?”

“Do you have a boyfriend?” More laughs.

The afternoon passed quickly – too quickly. As we waved goodbye to the children, I realised that this was the best souvenir that Indonesia could possibly offer; the sweet, generous, genuine smile of its amazing people. 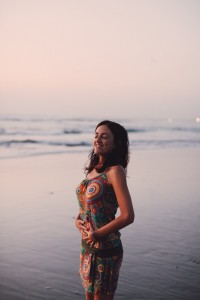 A former human rights lawyer and academic, Claudia abandoned her career to follow her true calling, which has taken her on many adventures and misadventures across the world. Including rafting down mighty rivers; hiking to hidden archaeological sites; zip-lining across canyons; mountain biking along dangerous roads; camping on desert islands and trekking to the craters of active volcanoes.

Through her blog, Claudia shares her inspiring stories, provides tips for other travellers and occasionally goes on a rant. Her mission? Hiking up all volcanoes in the world.