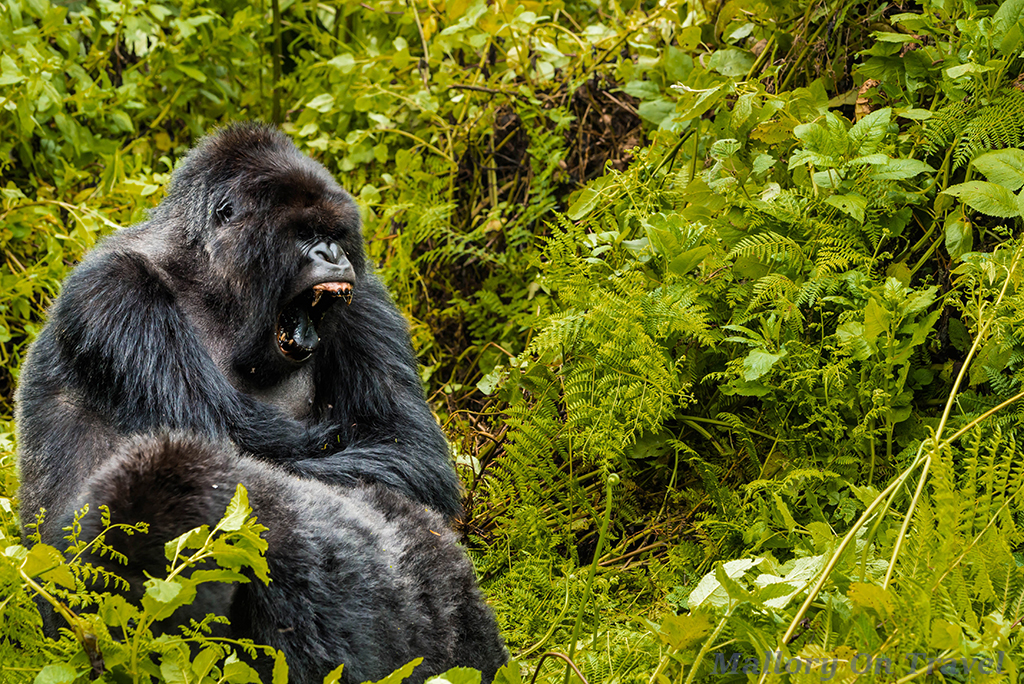 Visiting the mountain gorillas of Rwanda has been towards the top of my ‘list’ of desirable trips to make since a child. Ever since that David Attenborough television moment watched through young, wide eyes and later reinforced by going to the cinema to watch the film “Gorillas in the Mist” about the life of primatologist Diane Fossey. Inspiring moments, which produced the germ of desire which has been nurtured ever since. 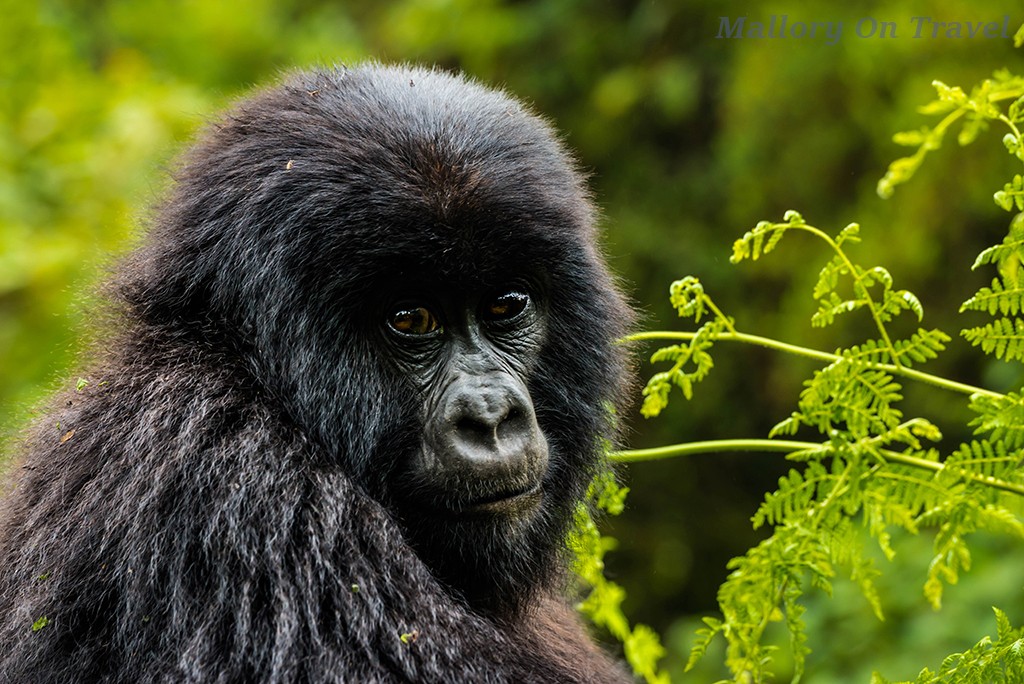 Cheeky, but no monkey

Rwanda, the country has also left an indelible mark though the human tragedy of genocide in 1994. In a horrific 100 days, from May to July, one million people lost their lives, the news of which most of us received through occasional and disjointed news broadcasts. The Hollywood film “Hotel Rwanda” bringing the sorry episode in the country’s history to public attention some years later. Visiting Rwanda, in east Africa was a must.

Staying a short drive away at the Mountain Gorilla View Lodge, our trekking group after collecting *permits was soon being introduced to Francois Bigirimana, possibly the best known guide in the Volcano National Park. He and his colleague explained the life cycle and social etiquette of a gorilla troop, before passing on some useful tips for trekking through the dense forest between the Karisimbi and Bisoke volcanoes. 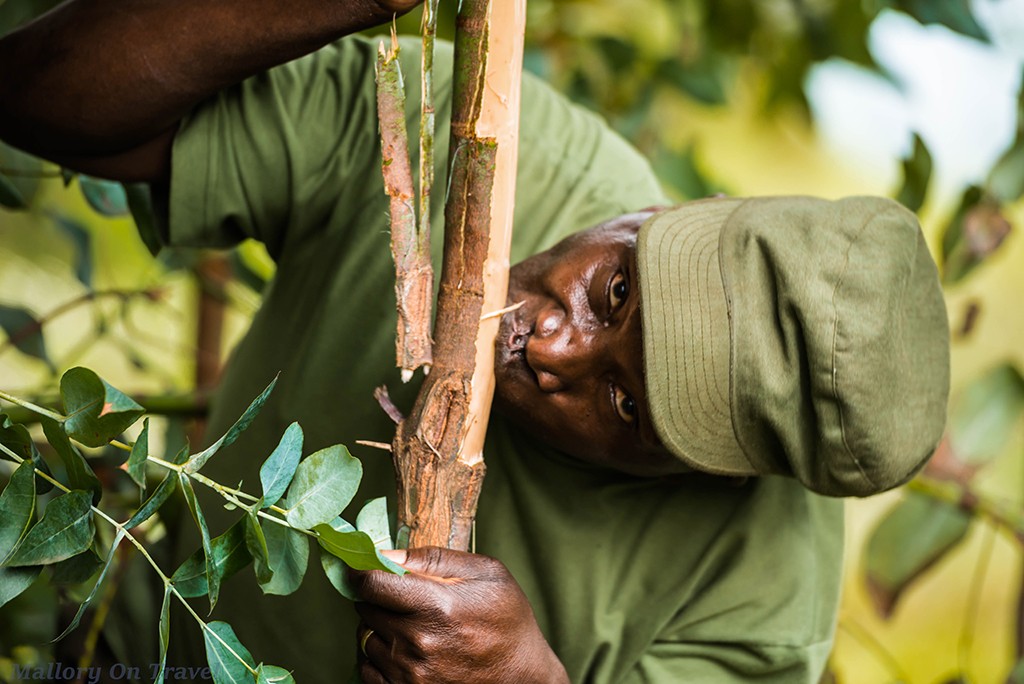 After another short drive to the starting point of the trek we had the option of hiring a porter. Initially, this may seem extravagant, but it’s a small cost of around $10 US and puts a little money back into the local economy, maintaining the sustainability and conservation objectives of the gorilla trekking project, Diane Fossey would approve! The tracks are often steep and muddy, without a heavy pack to carry, negotiating these much easier, it’s a win-win situation.

To be honest the mist was a bit wispy, but it adds a little romance so employing some poetic licence.

Francois makes the trek interesting, and entertaining, the gorilla sounds he imitates, are uncannily accurate as are his displays of behaviour; he’s a gorilla trying to break out of his human form. He also forages along the way, describing various edible plants from which the vegetarian gorillas derive both nutrition and water. Watching him strip the bark from a eucalyptus tree with his teeth was an unforgettable sight. 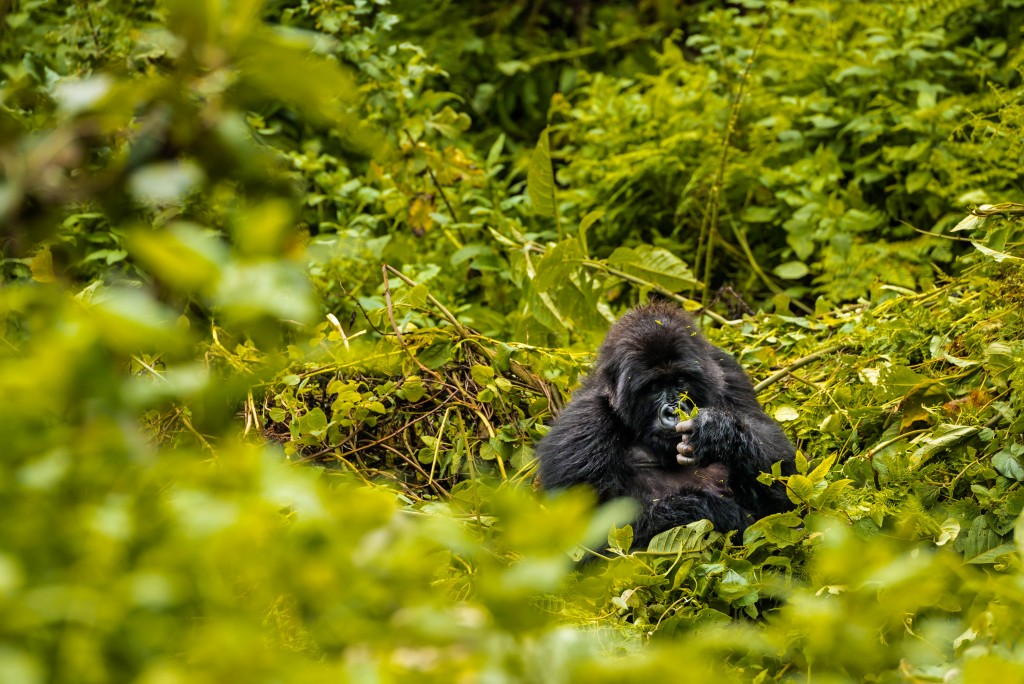 First glimpse of the Titus troop

The gorilla troops are tracked overnight by a group of rangers to ensure the guides know the location of each individual troop as it forages through the forest. They are also armed, providing a deterrent against the possibility of poaching.

The first sighting of a gorilla is one of the most incredible feelings, an emotional moment, as happiness, excitement possibly even spiritualism well up inside. I had to catch my breath, pulse racing as a juvenile stripped leaves from nearby plants around fifteen metres away. If that had been the only view on this trek, it wouldn’t have been too disappointing, however, we were about to get much, much closer.

Treading carefully through the thick undergrowth, speaking in hushed whispers we closed to within a few metres of the Titus troop. Six gorillas were casually lazing around in a small clearing, obviously gorilla made. The group included the main silverback, plus a secondary silverback, a pregnant female, juveniles and a youngster, just a year or so old. 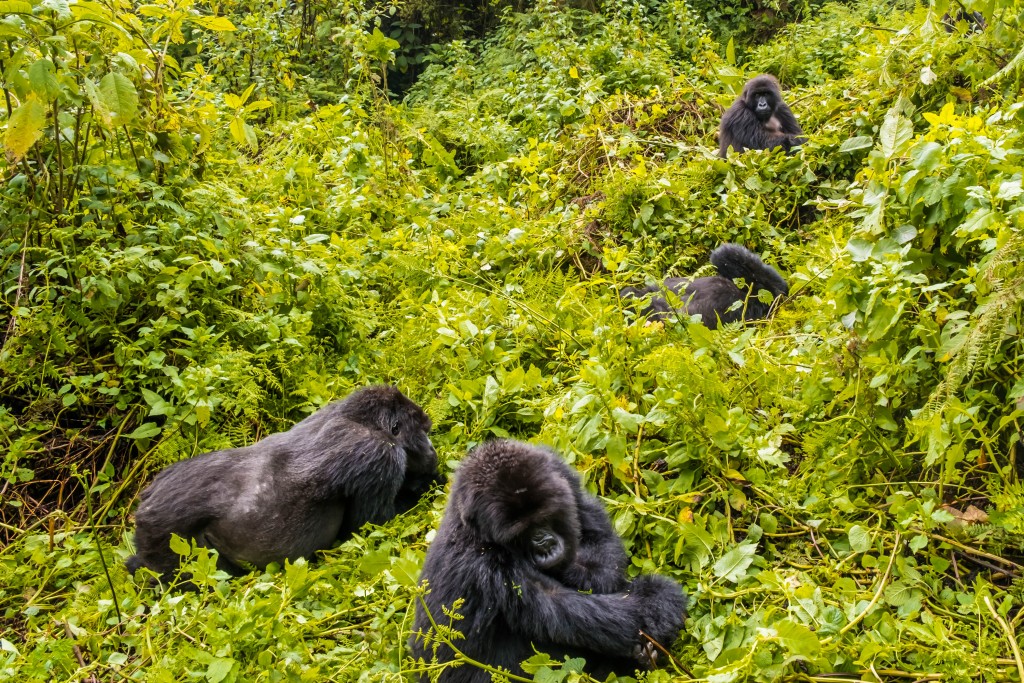 Initially ‘the’ silverback remained just out of sight, on slightly higher ground and hidden by vegetation, but later he would grace us with a few minutes of his time, sitting majestically to allow us a few photographs.

We chattered excitedly every time one of these gentle giants moved, looked at us or actually did anything and the staccato sound of several camera shutters would sound almost like machine gun fire.

It was rapidly becoming an incredible experience, and it was a privilege to be spending an hour in the company of these magnificent primates. Just watching them, their facial expressions and mannerisms, so many of which are common to us, it is easy to understand that we apparently share 96% of our DNA with them. 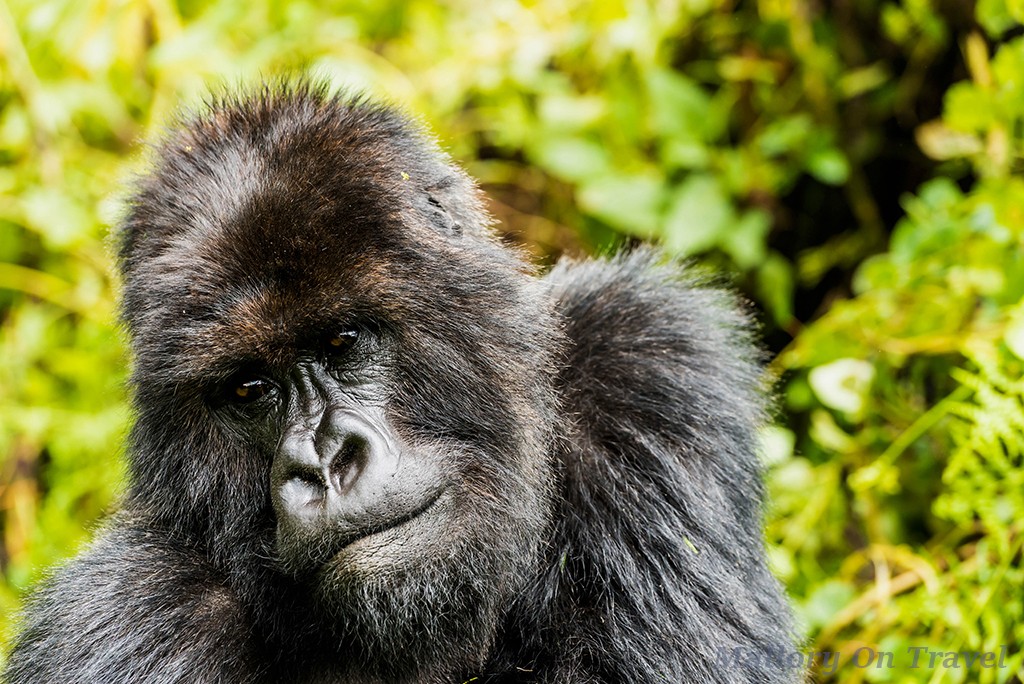 They were completely indifferent to our presence, in fact most of the time they seemed bored. There is a rule that trekkers should remain a distance of seven metres, however the gorillas haven’t read the rule book, often coming much closer and most of the time they were only two or three metres away.

The youngest member can only be described as a furry bundle of trouble; bouncing around the group wanting to play. Most of the adults ignored him, with a remarkable display of indifference towards his boisterous playing up, though at times their tolerance would be tested and he’d receive a mild scolding. 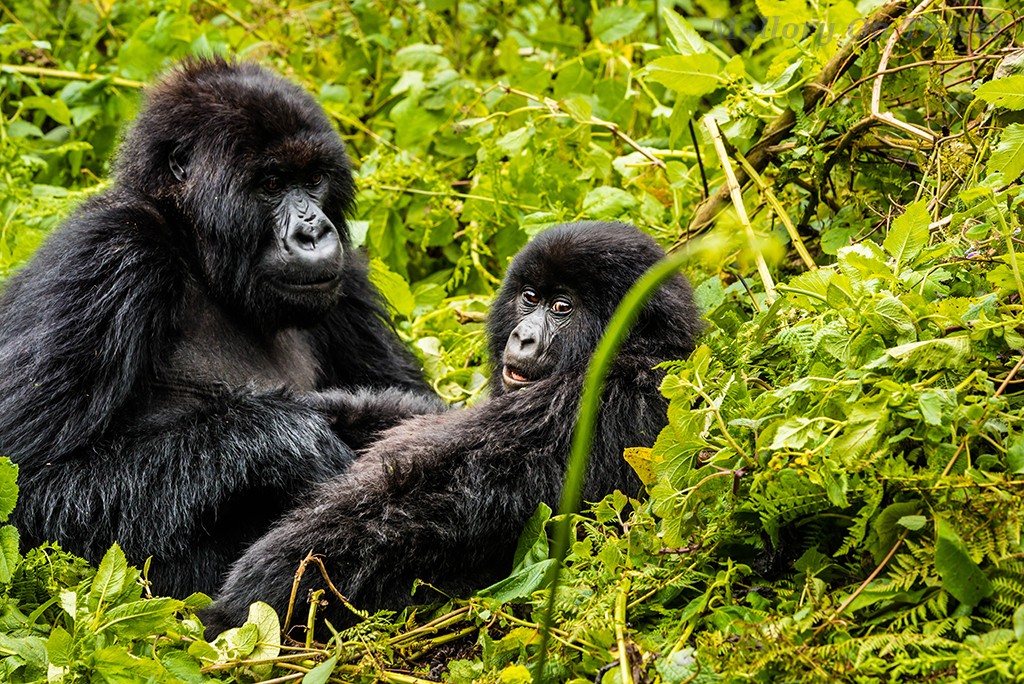 Calm before the storm

So, like any bad boy, he would then go and find a willing ally, enrolling his elder sibling, a young blackback into his mischief making. He was already an accomplished sociopath, knowing exactly which buttons to push to get a reaction from his brother, play fighting, clambering all over him and rolling around like a circus acrobat were the master tactics of his playground strategy.

His antics kept us amused for the whole of our visit, laughing and smiling at each interaction with his elders. 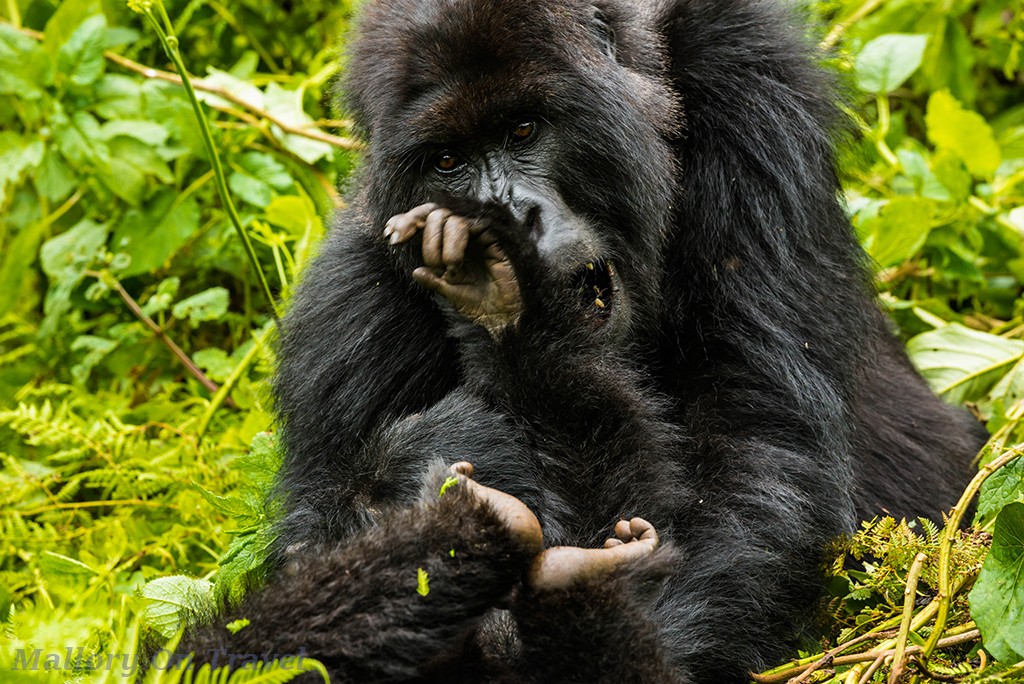 The young blackback got quite agitated and excited however, posturing and play rushing us several times, there wasn’t any real aggression, but twice he ‘tapped’ my ankle, the immense power of even this juvenile was immediately apparent. Francois and the other rangers kept him at bay, slapping the ground with branches of vegetation and mimicking sounds of warning.

Shortly before it was time to leave the silverback graced us with his presence, sitting regally for a few moments, allowing us to take his portrait. Although there was a second silverback in the group, the authority of the leader was absolute and obvious, this handsome primate had an air of superiority which was impossible to mistake. 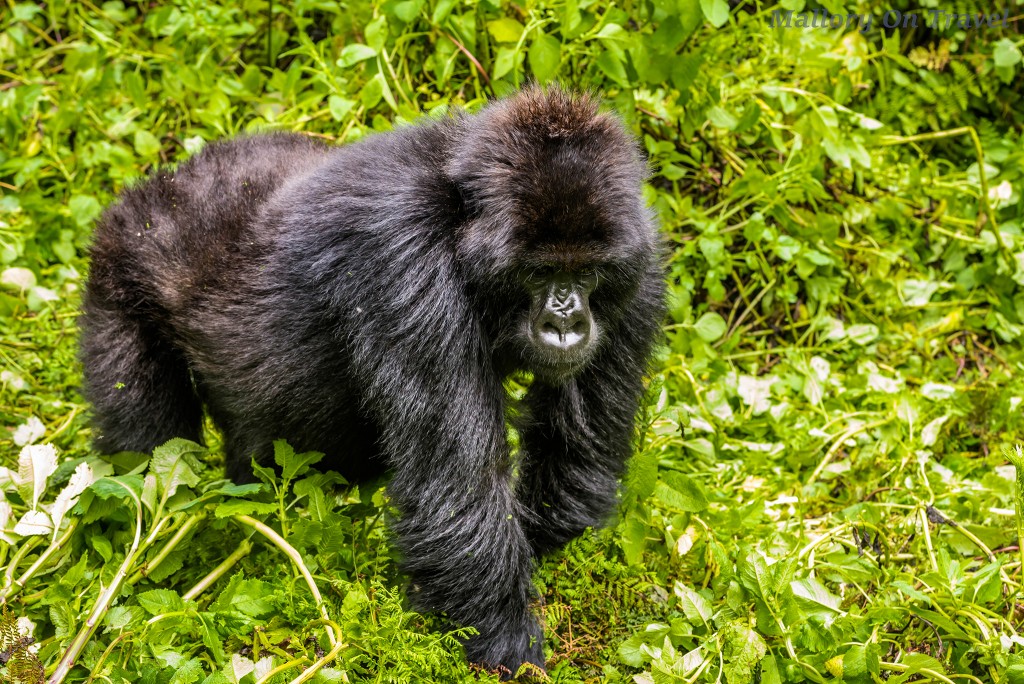 “Dinner was dominated by excited tales of amazing gorilla encounters”

All too soon our hour was up and it was time to say our farewells, our David Attenborough moment coming to an abrupt end. The experience produces an incredible high however, which can take several hours to dissipate, our group was certainly buzzing throughout the return journey. 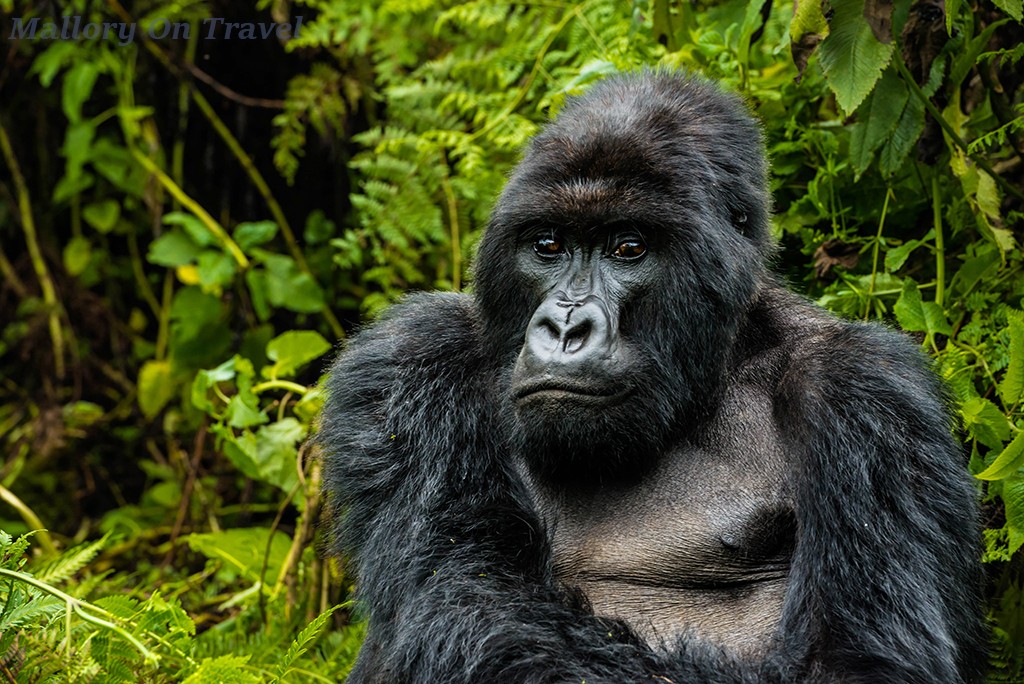 The mighty silverback and leader

Dinner was dominated by excited tales of amazing gorilla encounters that the separate groups had experienced. Listening to the individual tales describing their trek, from their perception merely helped each of us relive our own experience, bringing it all back in a flood of emotion and memories.

Gorilla trekking in Rwanda was merely a dream before, now that dream has been realised, it was even more special than expected, one of the greatest travel experiences. 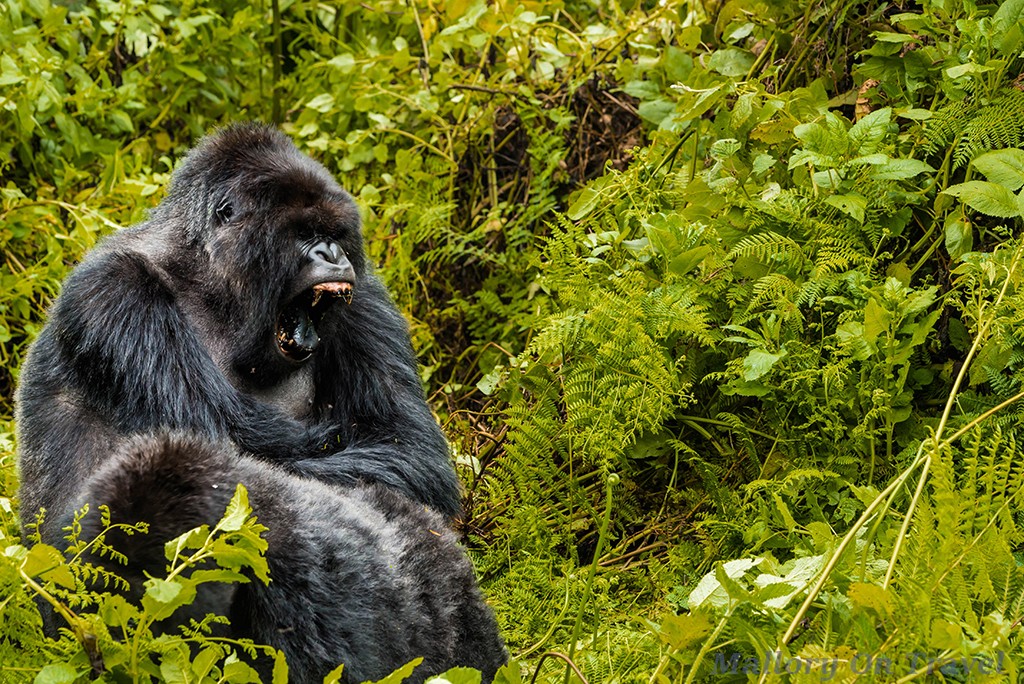 Ferocious …. no, just a yawn

*Permits cost $750 with most proceeds assisting with research, conservation and the wages of guides and trackers.