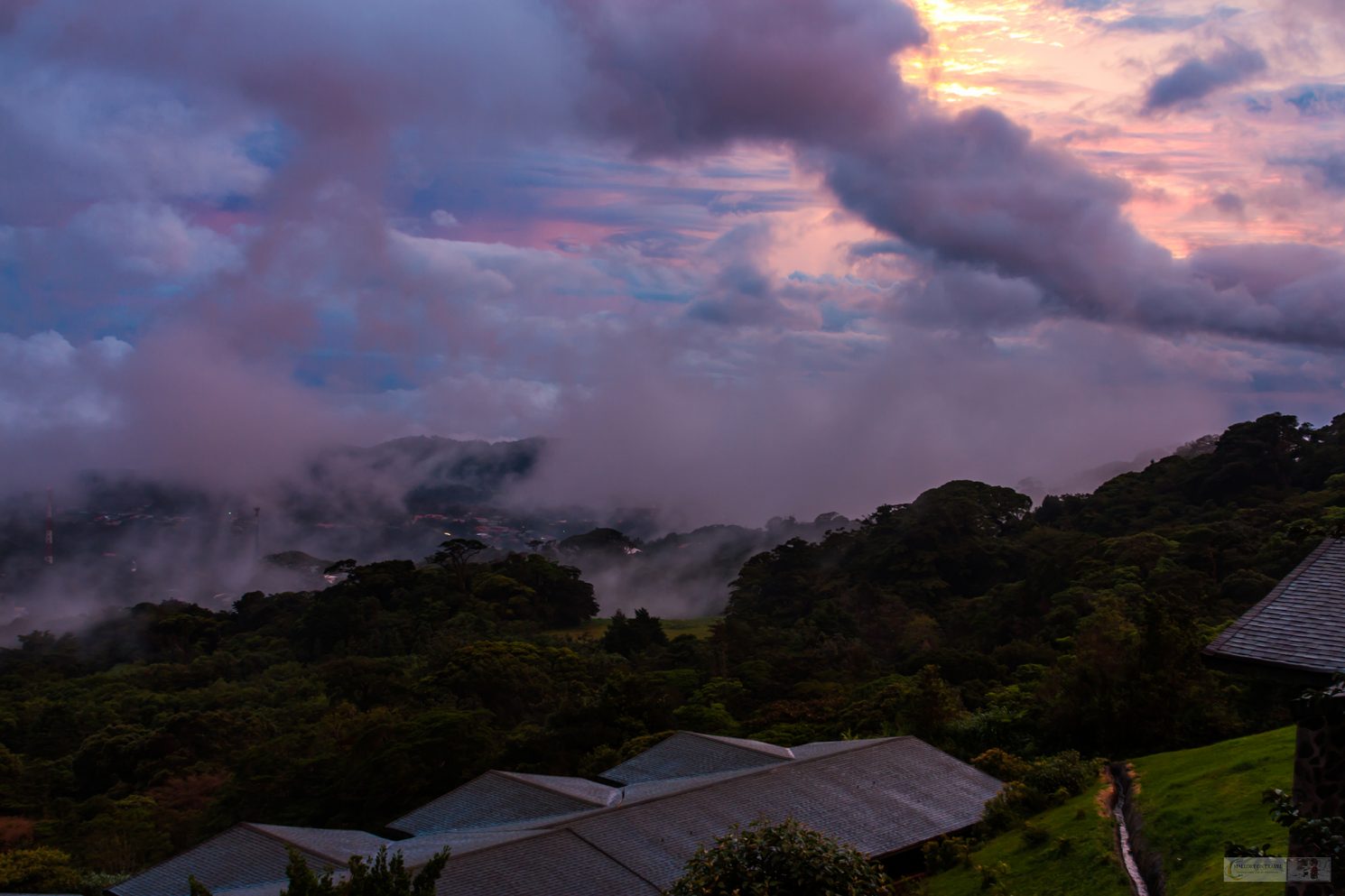 The clouds that give the forests of Monteverde, their name were rolling in, as the last drops of colour leaked from the evening sky, the first rumbles of thunder were heard. The sun had played hide and seek in the dense clouds, providing a spectacular light show, as it peeked out from every gap, adding rich hues of burnt orange, and even crimson. Adding soft shades to the dark clouds, and lighting up the blackening sky, this is storm watching in Costa Rica. 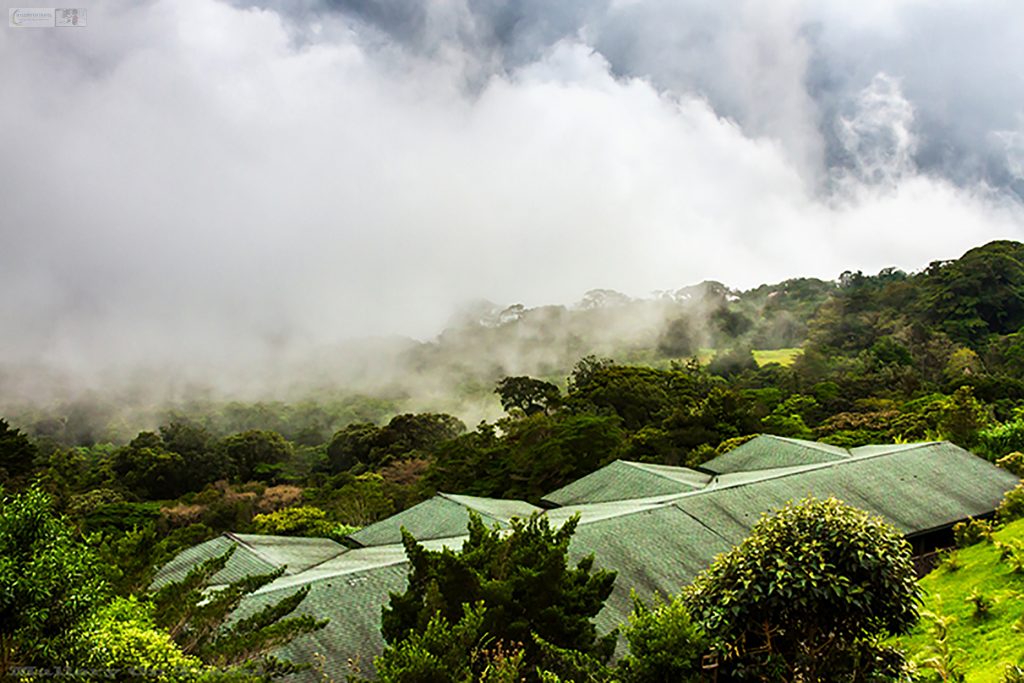 The cloudforest of Monteverde

The colour from the cloudforest slowly drained away, as the vibrant shades in the evening sky seeped away too, leaving the rolling, thunder laden clouds to deepen, and darken. Far from losing its vitality however, the landscape seemed to come alive in a different way, it appeared to gain texture.

Contrasting against the storm laden sky, the bright green of the forest gave way to a velvety, olive-green, until it was finally overcome by the oppressive black shadow of night. Losing its depth of shades, a uniform inky blackness swallowing it up. 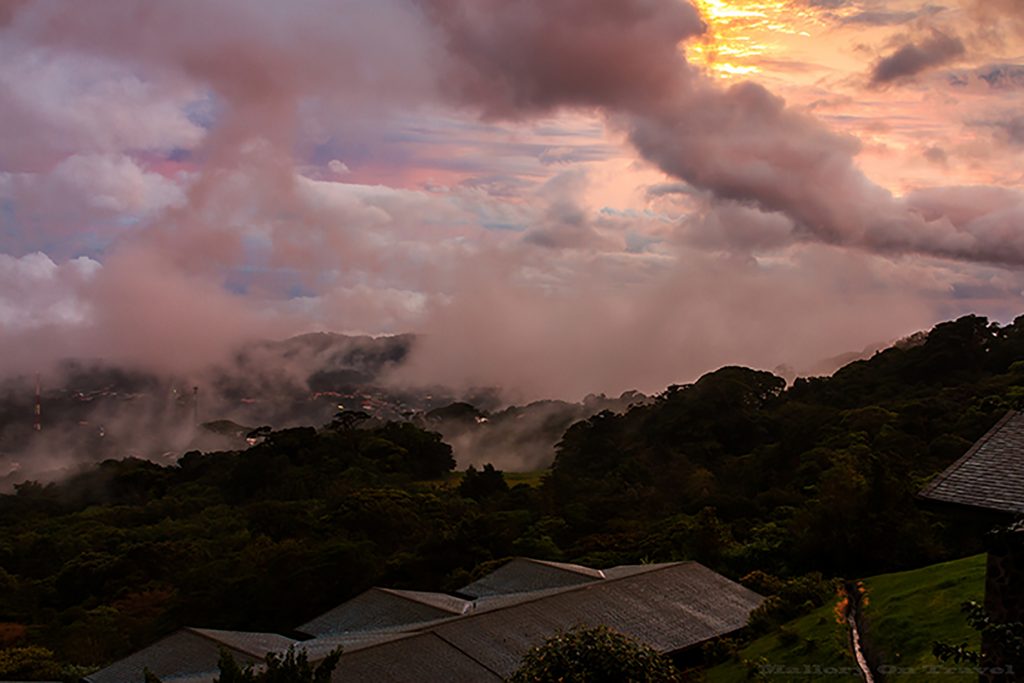 The red halo of a nearby town was sandwiched between the forest, and its shroud of low-lying, dark blue-purple clouds. The lights from warm homes twinkled like stars against the blue-cold sky. Far away the storm teased with pyrotechnic brilliance, and accelerating regularity. 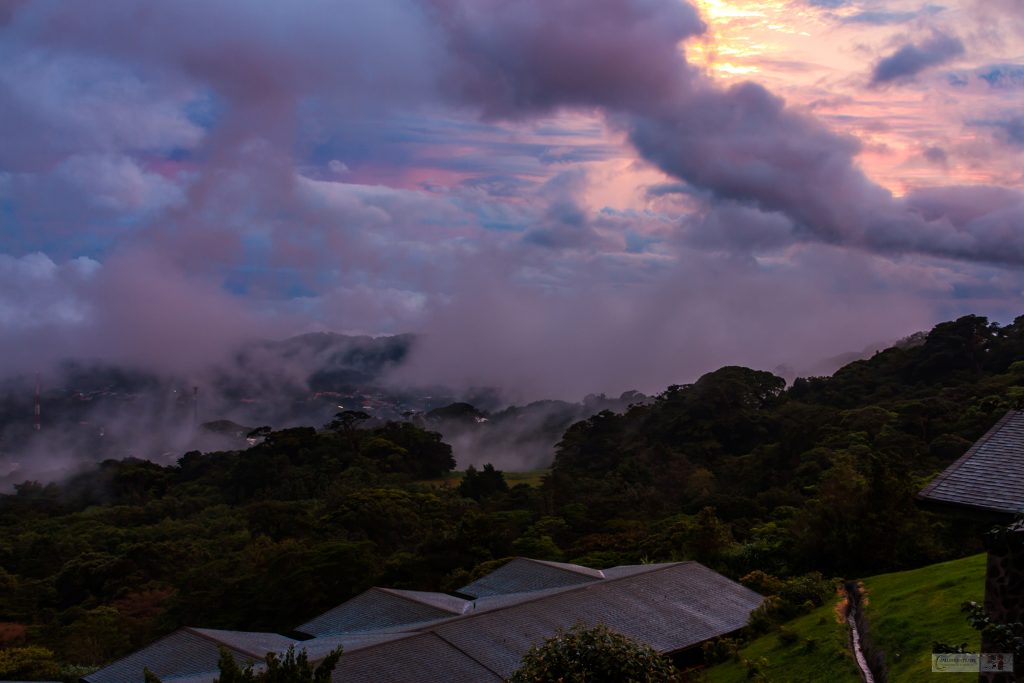 The colour of the day draining away

The eternal battle between night, and day was finally coming to its daily end, the distant grumble in the skies, and occasional flash of lightning accentuating the feeling of conflict. The loud claps of thunder, sounded like the titanic clashes of celestial combatants, the lightning seemed like sparks from swords of the gods, a battle lost, but the war yet to be won. 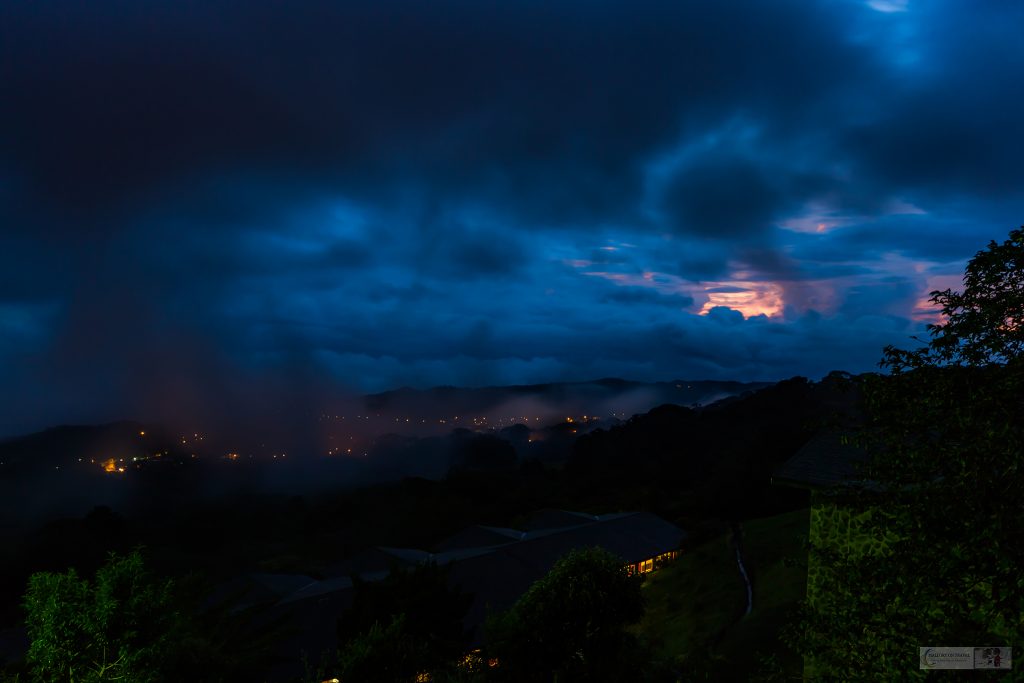 I would have preferred to find a good spot to continue storm watching, As it developed, and intensified all night, possibly creeping closer to the viewpoint. Unfortunately dinner was already booked in a treehouse in town, that’s right, a treehouse.

Several hours later, having returned, somewhat delighted that the storm, while still distant was continuing it’s battle. Long, low rumbles, like the voices of celestial leviathans followed by sudden flashes of natural electricity, cutting brightly through the black shroud of night. 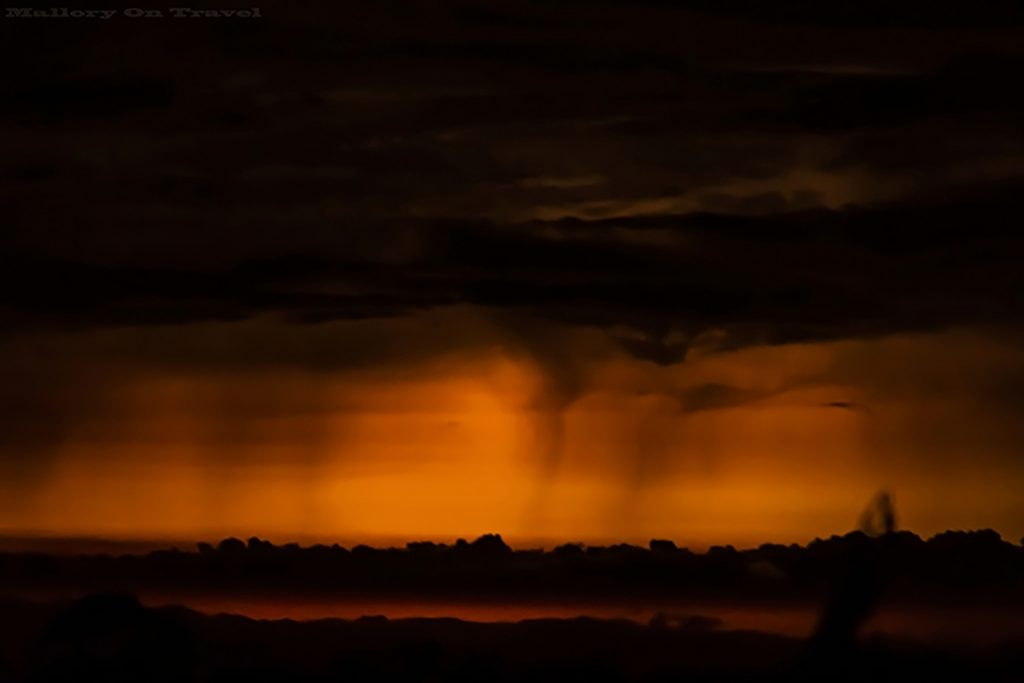 Sheet lightening and a sheet of rain

Regular sheet lightning separated by powerful forked lightning strikes, the shadows of heavy rain clearly standing out against a backdrop of golden orange. The electrical storm powered the Costa Rican night sky, like a flashlight on the horizon.

Standing out, watching nature’s pyrotechnic display for more than an hour, attempting to capture, a spark of it’s power, I was mesmerised. Experimenting with shutter speeds, while watching in silent awe. Traditional storm photography advice is to take long exposures, but upping the ISO, and taking relatively short exposures seemed to provide the best results. It meant the lightning strikes needed anticipating, and some fast reflexes. 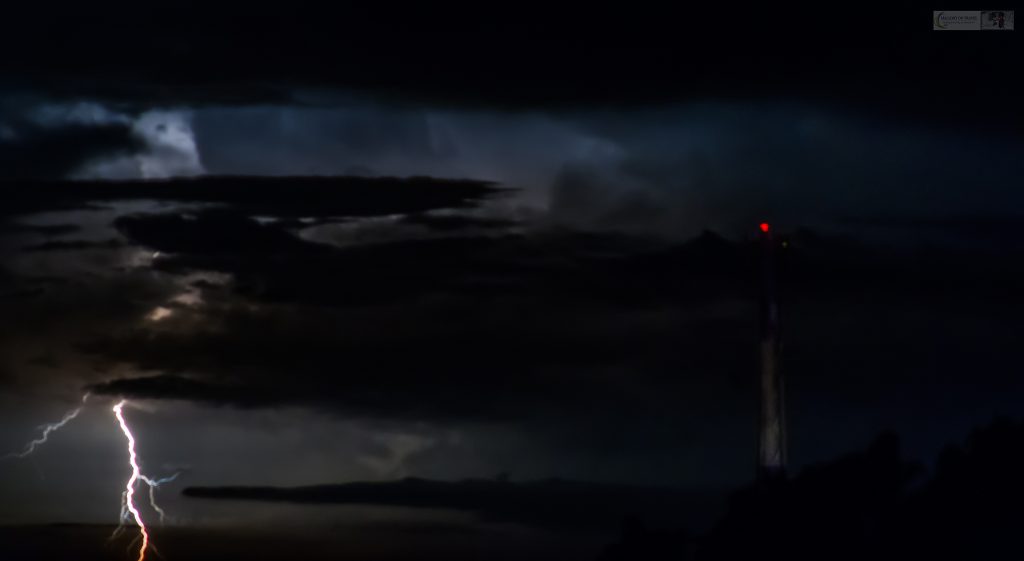 Storm watching has always fascinated me, cranking up my imagination with every flash of heavenly light, and each lingering rumble, like a percussive orchestra playing high above earth. Witnessing their symphonies often has me almost willing that the weather forecast be ‘unfavourable’. Along with the aurora, storms are probably nature’s most spectacular shows, truly the fireworks of the gods. 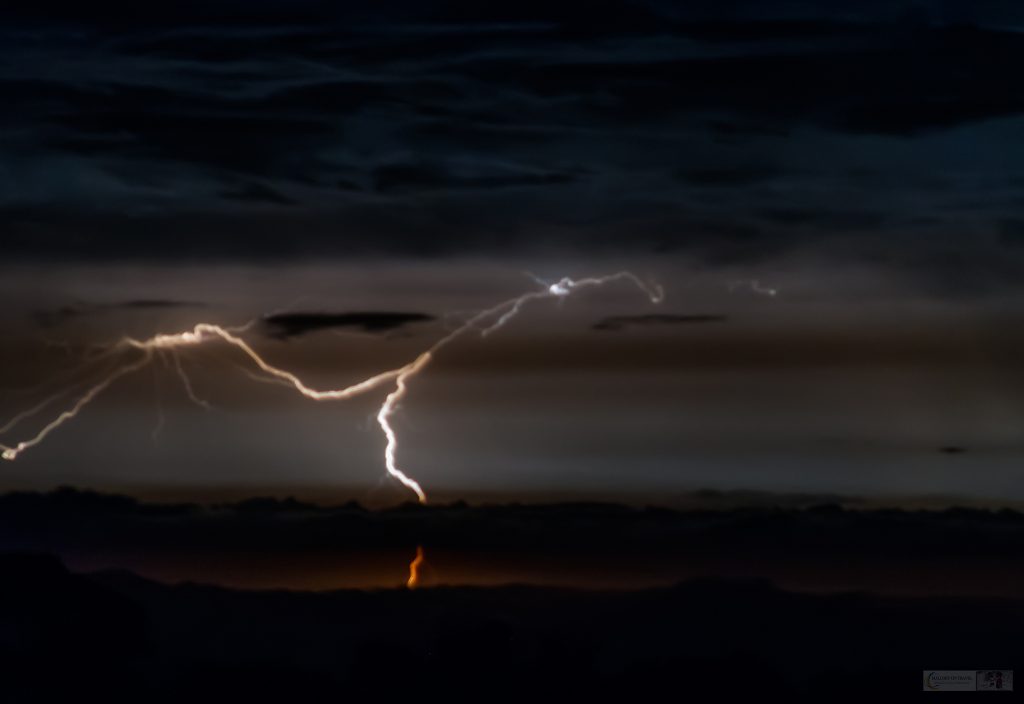 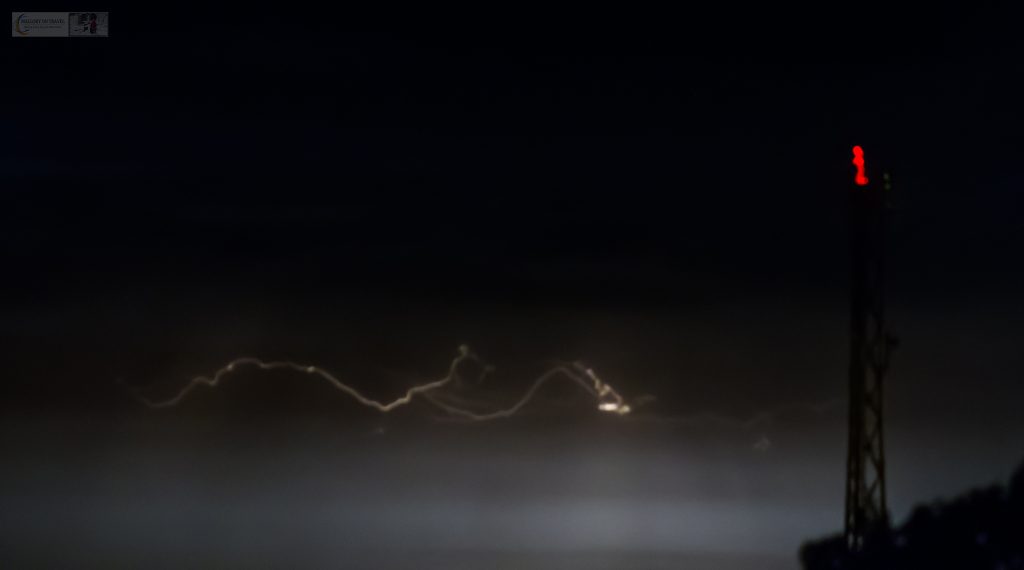