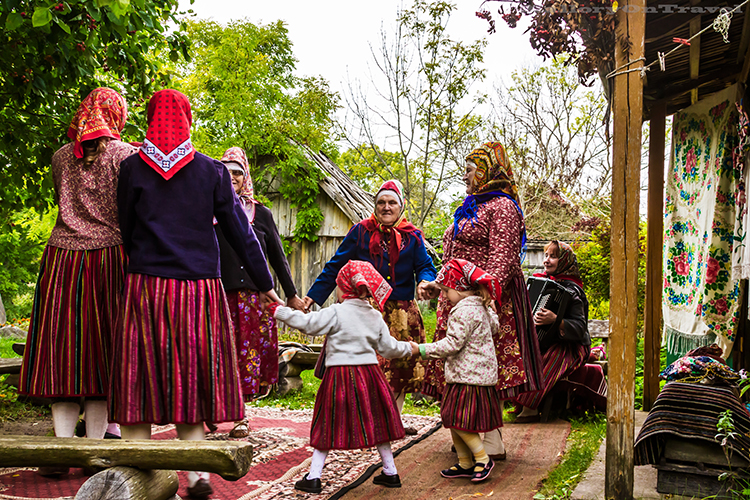 Waiting at the small ferry port of Munalaid, Estonia for a boat to take me to the island of Kihnu in the Gulf of Riga, the tone seemed set for the visit. Asking around, the few people present didn’t speak English, and weren’t able to offer any advice regarding the journey to the island. Eventually a small boat arrived, but again we couldn’t communicate, until the harbour master intervened, confirming it was the ferry. 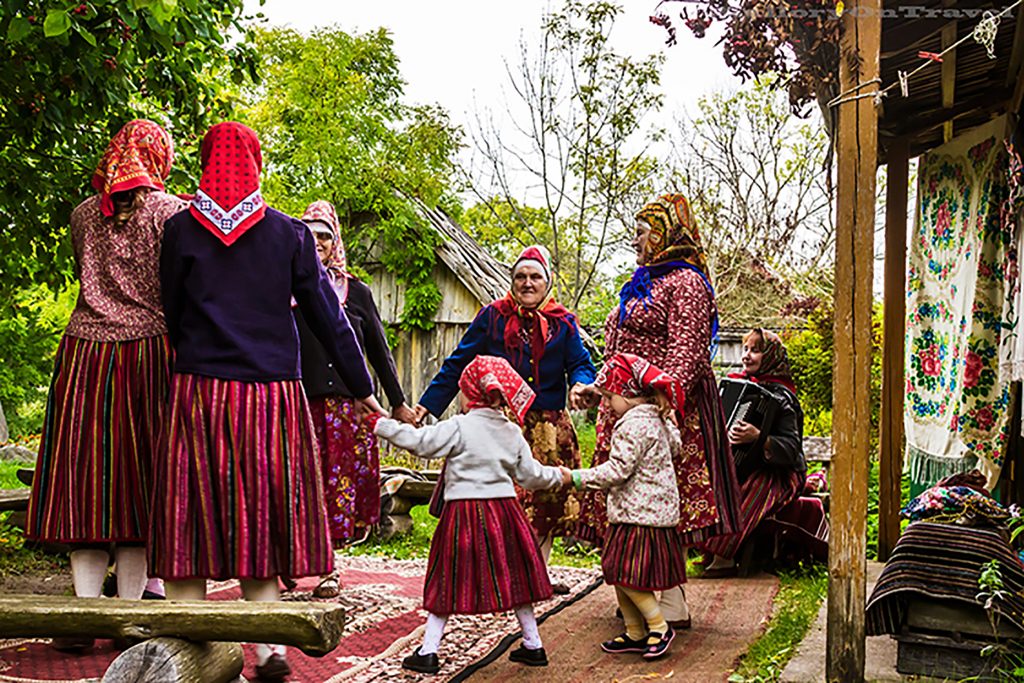 A short boat ride later, I was stepping on the dock at Kihnu port, and being greeted by my guide for the day, Mare Mätas. She dressed traditionally, wearing brightly coloured striped skirts, and apron with a matching head scarf, and floral jacket. The women wear these all the time, and it is one of the reasons I had been so keen to visit. 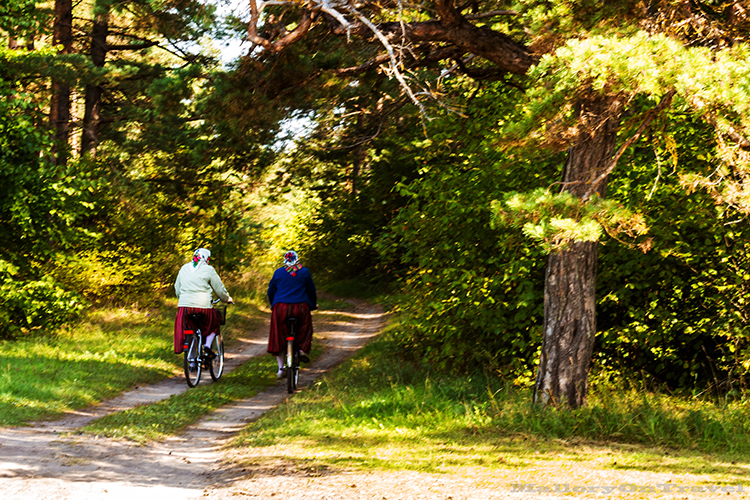 Where are the motorcycles? 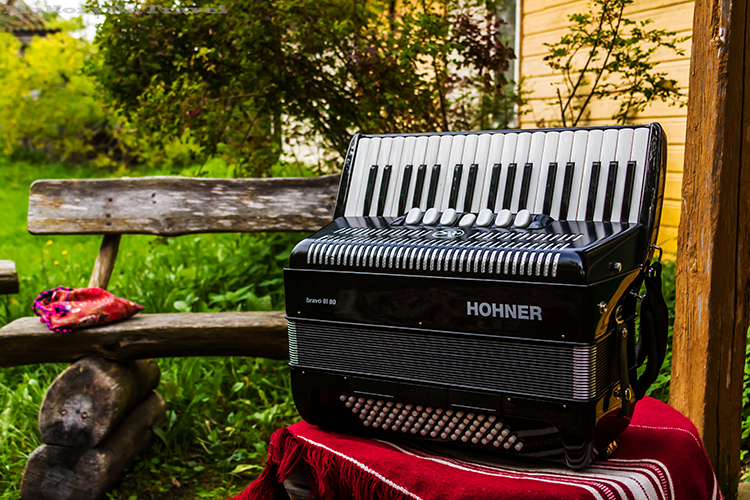 Alive with the sound of music

Every woman has dozens of skirts, and at least one hundred aprons. The skirts are usually predominantly red, but they can actually communicate messages within the community. After a bereavement, the stripes will be mainly black, and after a time, replaced with blue, communicating the stage of mourning to others. Kihnu women also love to sing, and dance, but dancing is forbidden whenever black stripes are worn. 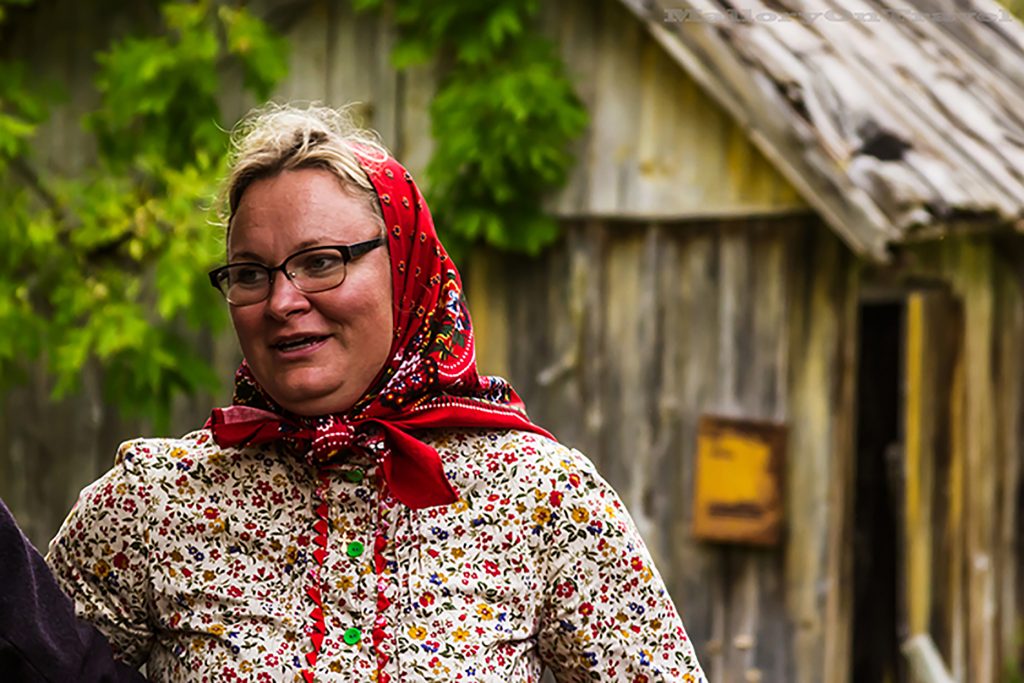 Mare, my guide to Kihnu

Women are the primary decision makers of the island, as the men are usually away. Fishing, and working on cargo vessels are the main industries which employ the islands men, often taking them far afield, and away from home for many months. This leaves the women taking care of their families, and as leaders in the community. 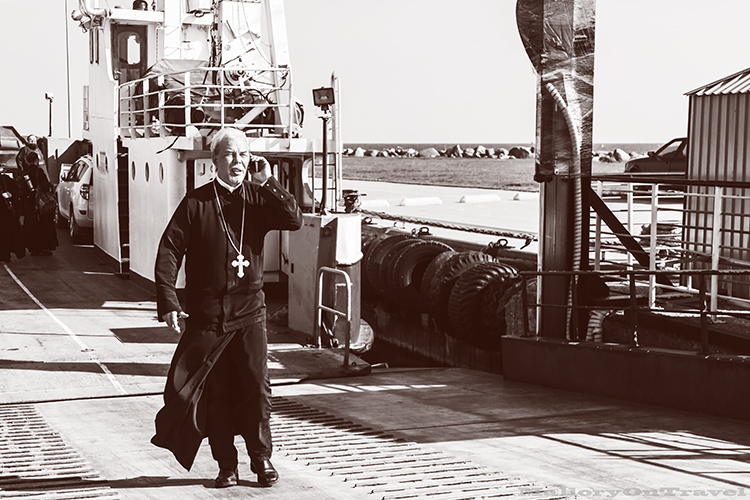 Father on the ferry 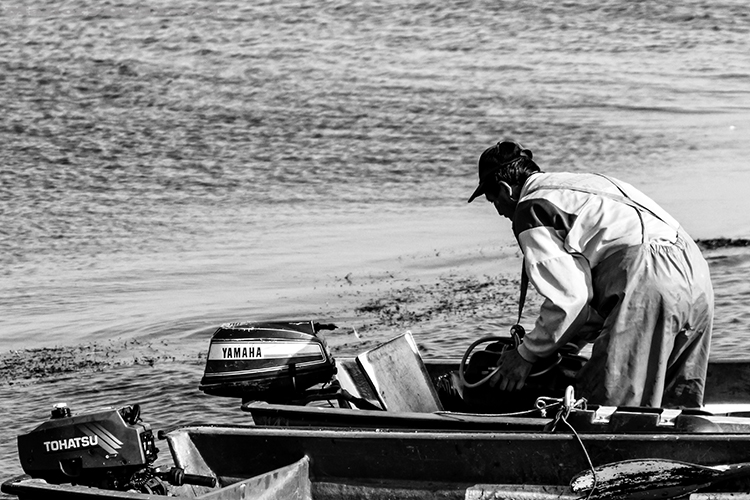 The colourful nature of their traditional dress demonstrates their love of vibrant shades, and they almost dismiss the interests of men as dull, ‘only’ fishing, sailing or seal hunting. The islanders take around sixty seals a year, feeding their families, using all the animal, it seems sensible, and sustainable. They also collect seabird eggs during breeding season, an activity enjoyed by families for generations. 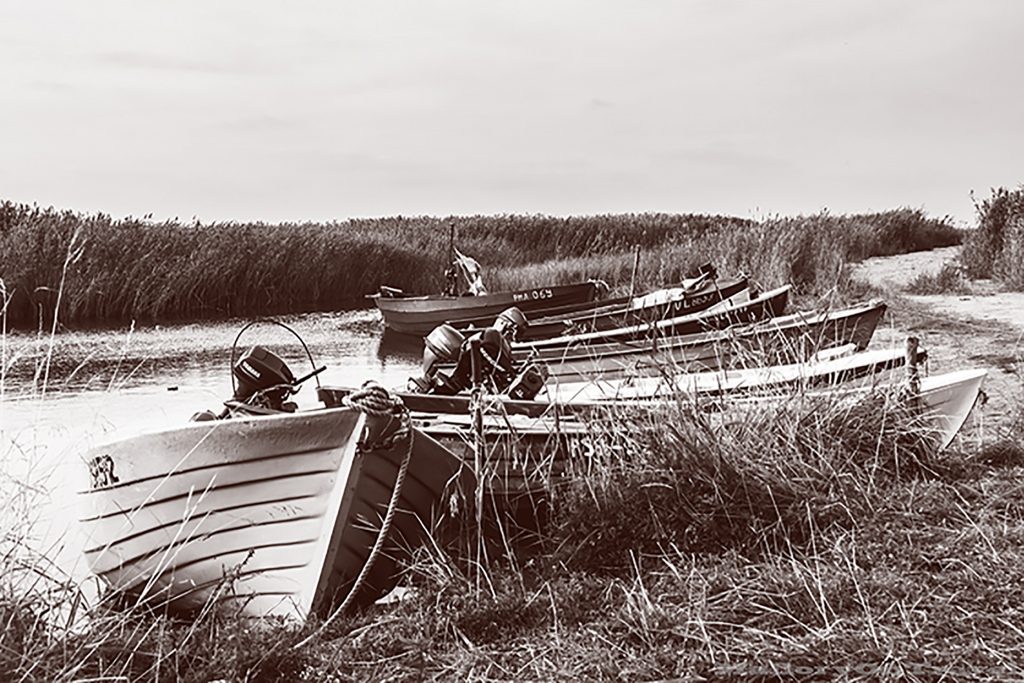 Are there any men here?

A picturesque lighthouse is popular with visitors, but possibly feels slightly out of favour with the women, another of the men’s toys. It’s manned by a keen birdwatcher, a private man, who seemed more than happy that most people left him in peace. 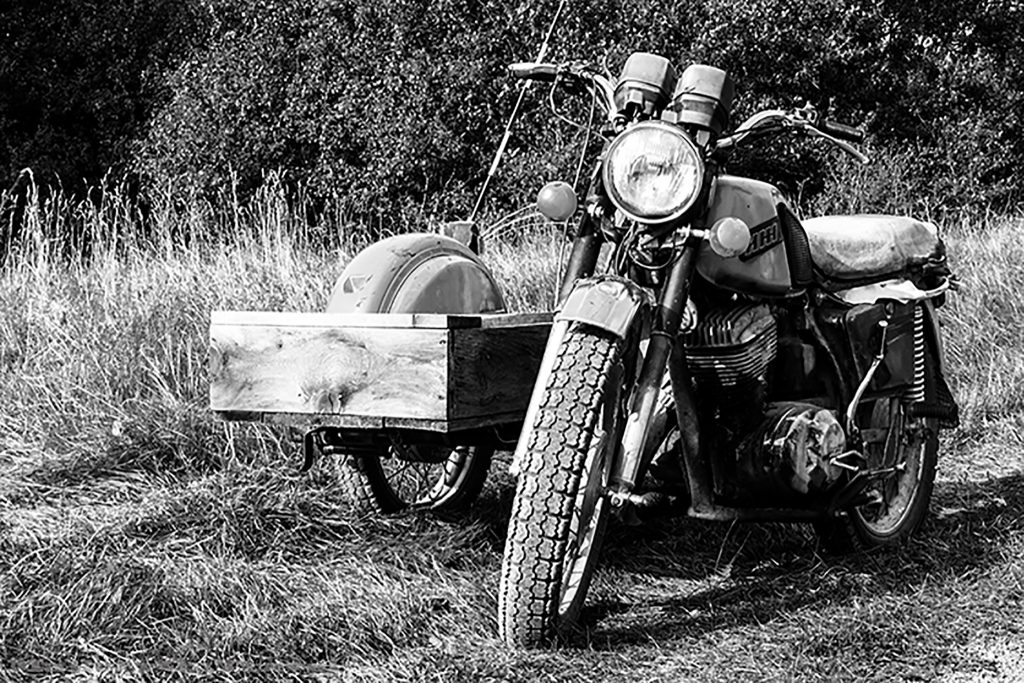 Touring the island, passing through the four villages of Lemsi, Linaküla, Rootsiküla and Sääre the number of wooden farmhouses is striking, most included several outbuildings. It feels almost like stepping back in time, and very agricultural. It’s easy to imagine this is how much of Europe was at the turn of the twentieth century. Although many seem ramshackle barns, others are well maintained, and brightly painted, often yellow. 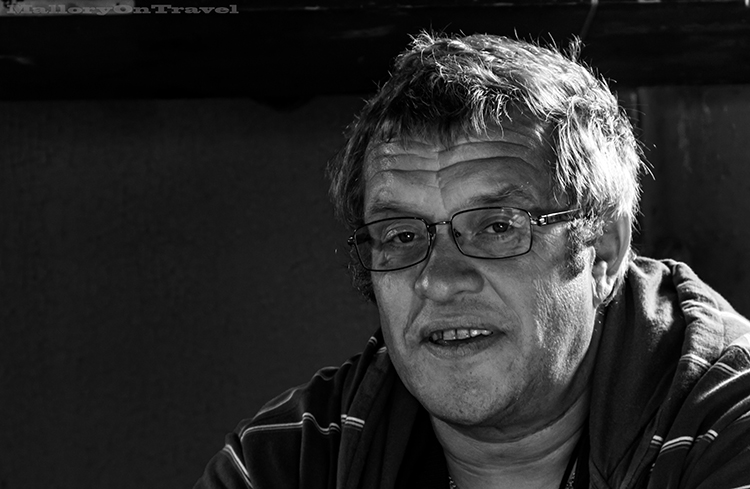 Happy in the lighthouse 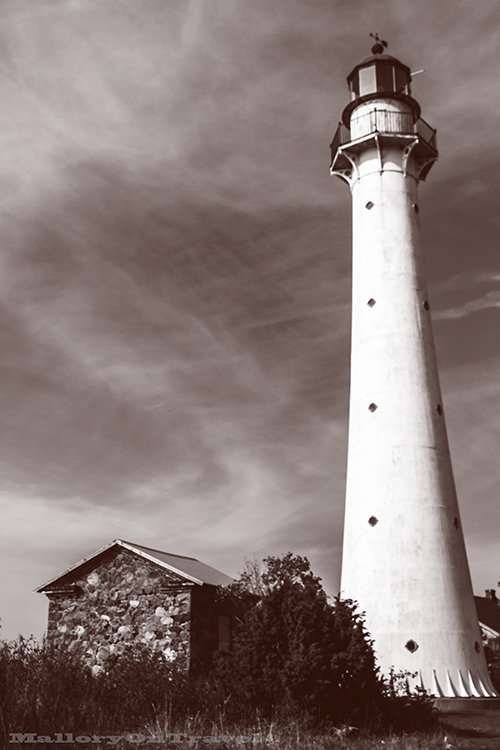 The islanders manage to retain their cultural identity, while still enjoying the benefits, and technologies of the modern world. The outbuildings of almost every home include a storeroom, and a sauna, and I spotted at least one hot tub, flat screen television, and espresso machine. This isn’t any third world society,  struggling with poverty; retaining important aspects of their culture is a matter of choice.

I was desperate to witness women riding around the island on motorbikes with a box sidecar, while wearing their striped skirts, and bright aprons. A quirky cultural characteristic of the UNESCO recognised island. Due to the arrival of more cars, this is becoming less common, and unfortunately I wasn’t lucky enough to see any motorcycle riding ladies on this visit. 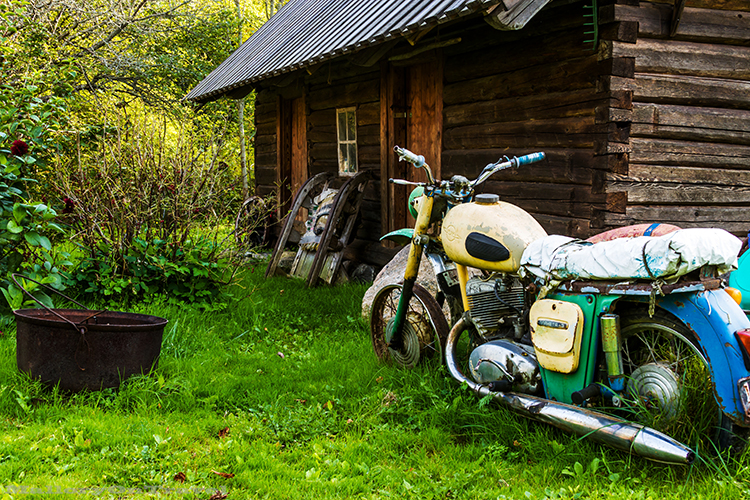 Not sure this one is on the road 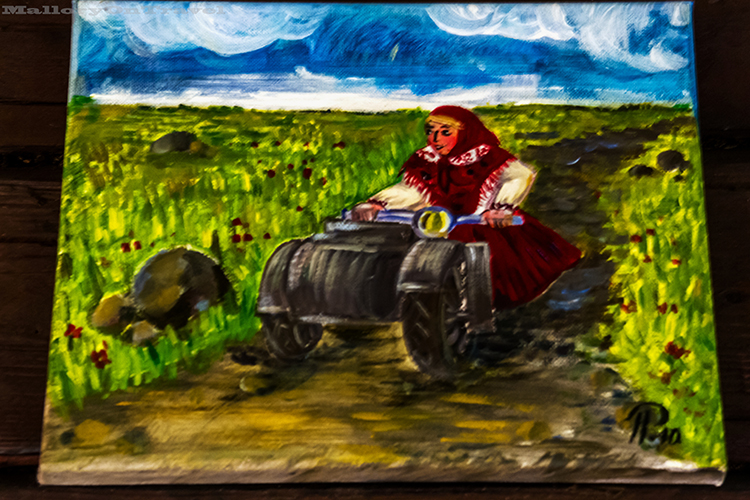 Several island women, and a couple of young girls were kind enough to demonstrate, and explain a little of their culture. They used songs, and dances, to the melodious notes from an accordion, clearly showing how important these are to the islanders. It seemed right, as music plays a major role, all children learning at school one of the preferred instruments, the accordion, or violin.

The wedding ceremony seems especially fascinating, involving singing, dancing, lots of feasting, and drinking, it takes place over three days. Almost everybody connected with the bride, and groom receives an invite, meaning often more than three hundred people attend. The ceremony, is held in the both the home of the brides family, and the grooms house, the party moving between houses at various stages of the wedding. 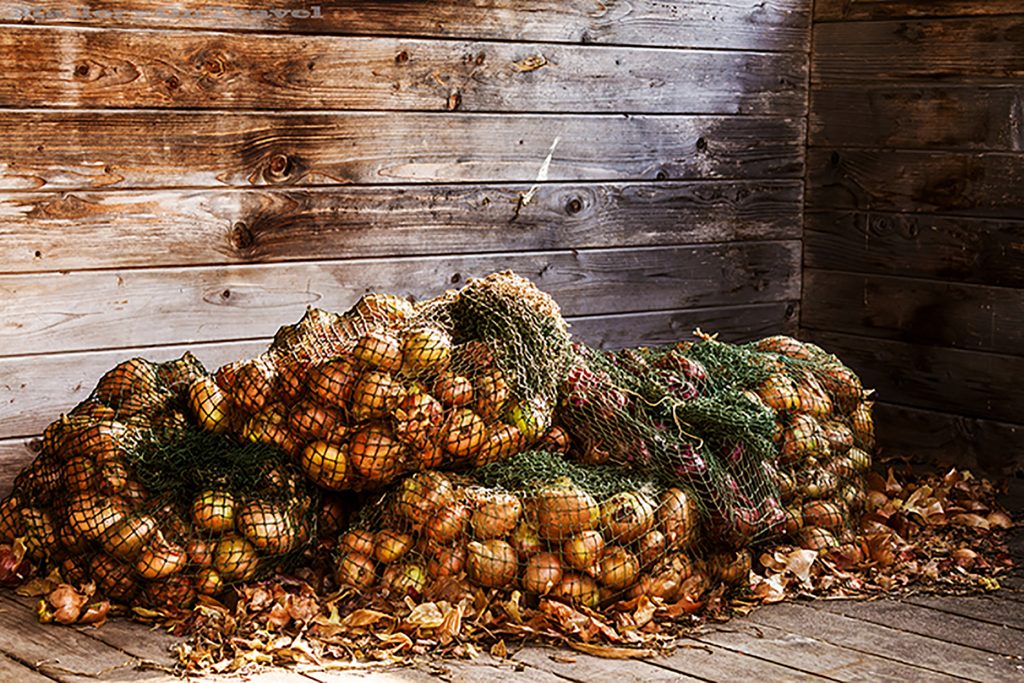 They know their onions in Kihnu

It culminates with the bride presenting items of her dowry, to wedding guests in their future home. This can consist of several hundred items of clothing, including knitted stockings, gloves, and belts. There is often a degree of humour involved, with older bachelors receiving gifts which remind them it’s about time they found a girl, and settled down.

The last of these traditional weddings took place in 2009, the sheer numbers involved, and organisational difficulties making them less common now. It is a part of the culture, which they may be at risk of losing. 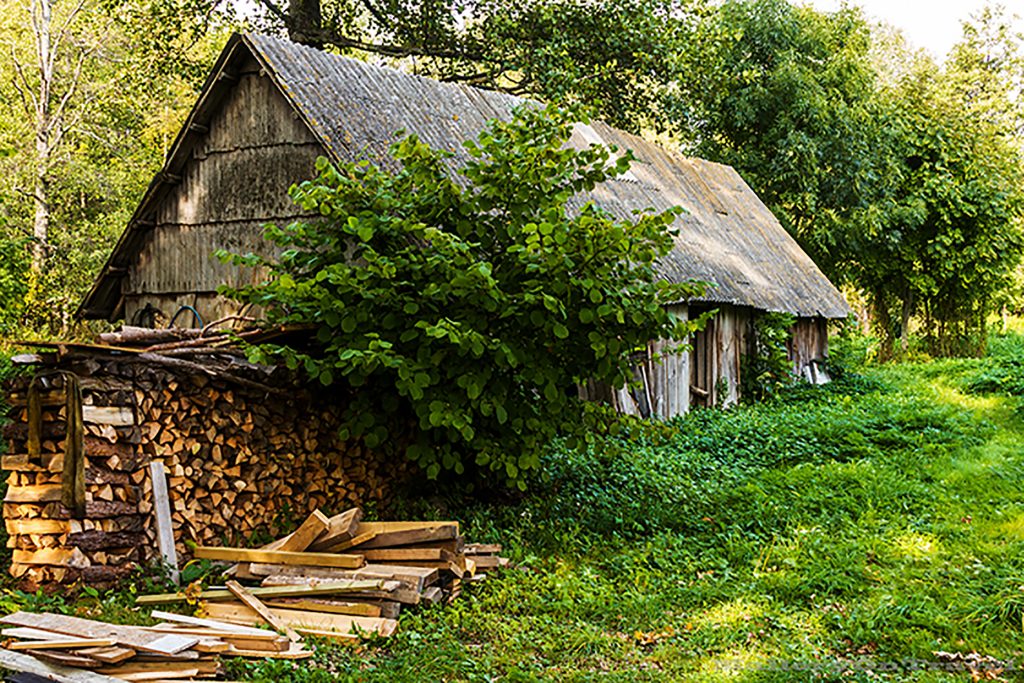 The cotton aprons are also difficult to come by now, they were originally produced in Russia, and finding a new source is proving challenging. Any company producing paisley patterns on red cotton, there’s a market here!

The gifts usually take many years to produce, and most brides are helped by family members, and friends. The women are proud of their traditional crafts, and keen to share the skills with their children, and visitors. This willingness attracts female visitors from all around the world, hoping to learn from the skill of the Kihnu women. I met master craftswoman, Rosie, who is not only an inspiration to her own people, but has written patterns, and books used by avid knitters worldwide. 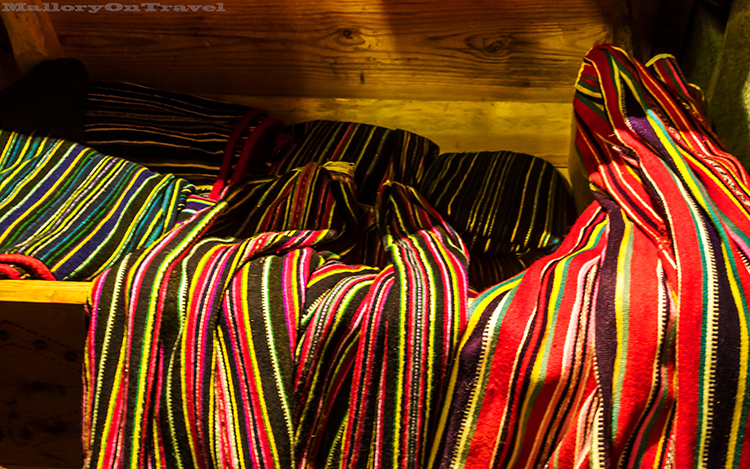 A cache of striped skirts 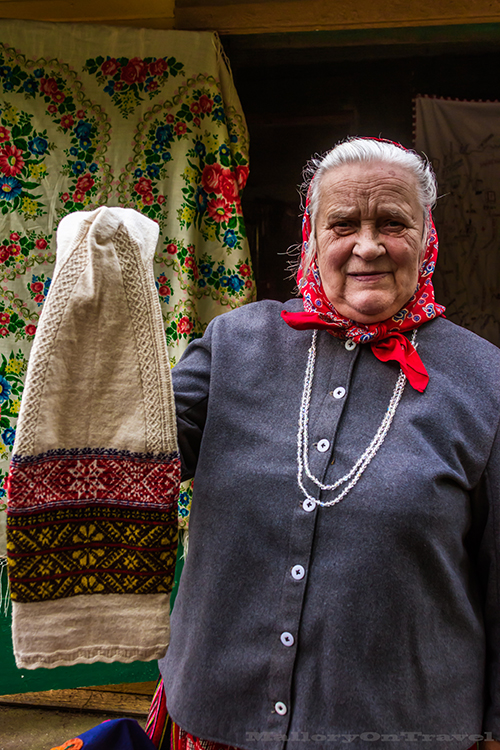 Rosie showing off her stocking

There had also been an opportunity to try some of the local food, simple, hearty fish soup, and a meaty casserole. The kind of food I really enjoy, a far cry from Michelin starred restaurants, just a good, honest meal. There’s several of choices for accommodation, from guesthouses, and campsites, to homestays. Meals like this will be served daily, visiting the island has plenty of options, for every budget. 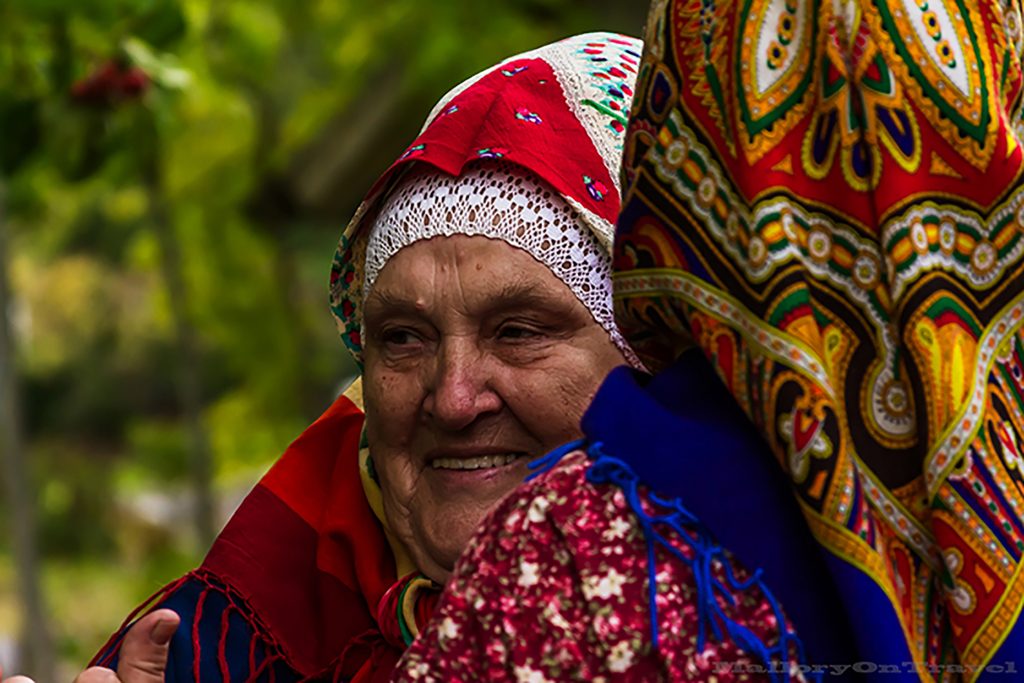 All too soon it was time to take the small boat back to the mainland, leaving me wishing there’d been time to stay at a homestay. This would have provided a fascinating insight into the way of life on the island of Kihnu, where women are the cultural heartbeat. 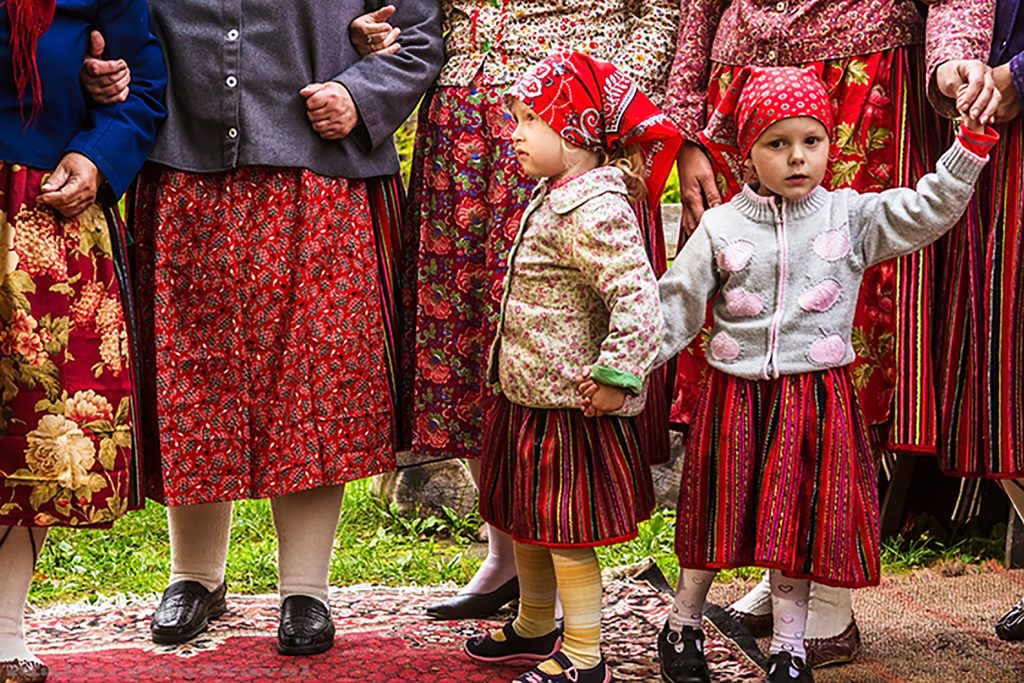