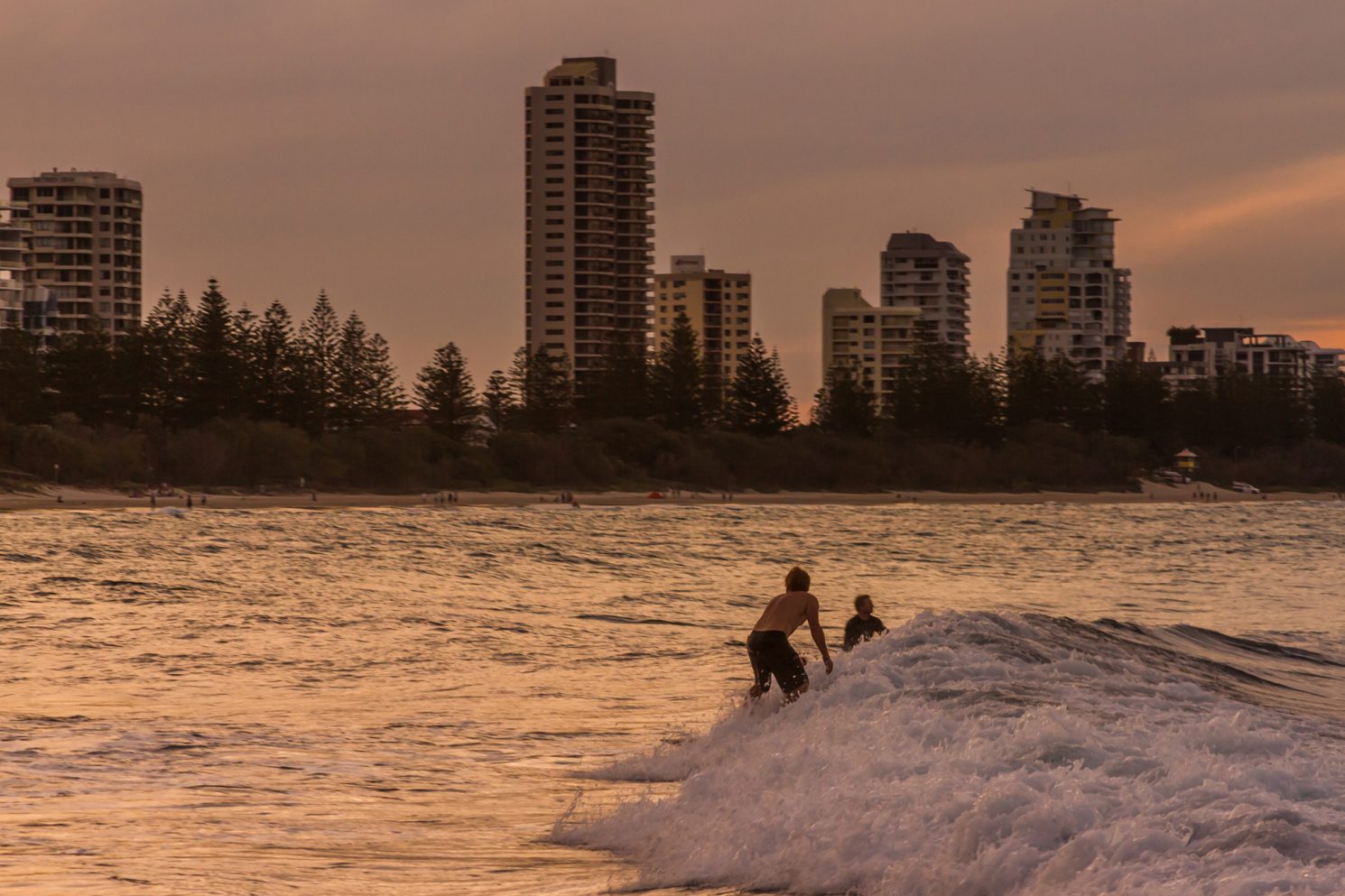 As the sun begins it’s gradual daily climb above the horizon, breakers crash on the shore, and their wash creeps up the Gold Coast beach. The resulting froth caresses the feet of neoprene, or boardie clad onlookers. Clutching their favourite board tightly under an arm, or tethered to an ankle, allowing it to bob gently by their feet with each encroaching wave. The irresistible power of the surf dissipated over a seemingly endless stretch of wet sand, reflections of the fiery orb as it mounts the morning sky giving the sand a rich golden hue. 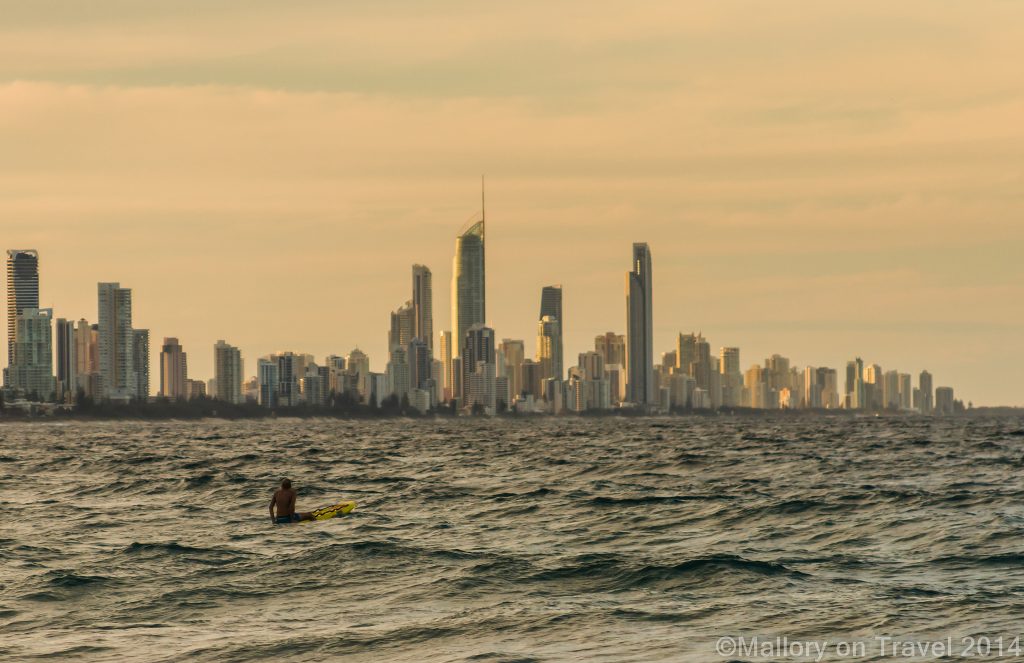 They have answered the “call of the surf”, climbing out of beds in darkness, grabbing light breakfasts, and hitting beaches like Burleigh Head, before completing a full day at work. The promise of a powerful surf, pumping waves, and the almost spiritual high of charging a rolling tube of saltwater gives meaning to the morning. This is dawn patrol, on the Gold Coast of Queensland. 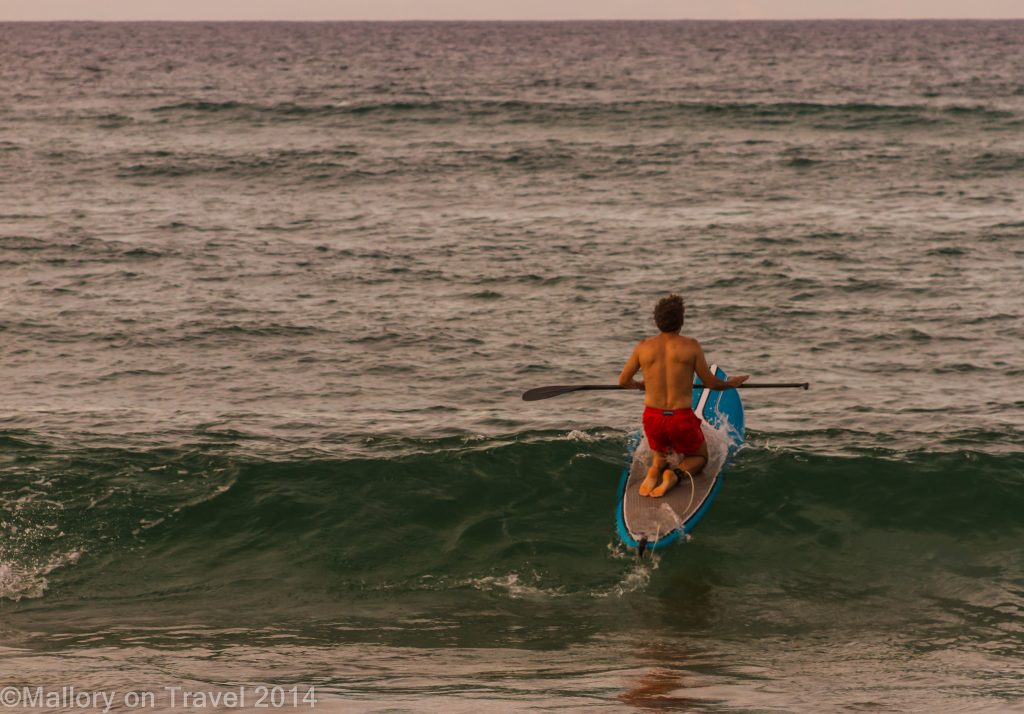 Paddling beyond the breakers

They arrive with surfboards, paddleboards, kitesurfers, boardsails, kayaks and boogie boards, or maybe just a swimming costume. An early morning swim is often as appealing as riding the surf on any wave chariot. 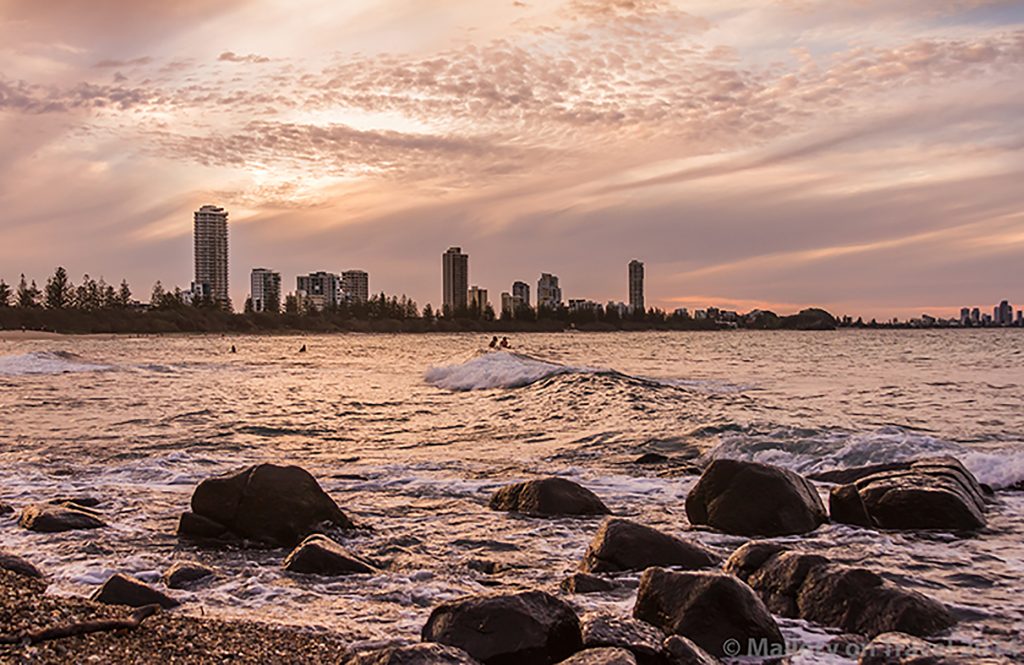 Surfers paddle out to the line up, beyond the breakers, sitting, or lying on their boards, waiting patiently to carve the perfect wave. Acrobatic kitesurfers and boardsailers use the power of the wind to coax their boards high above the crest of each wave, attempting to hang in the air a moment longer than last time. 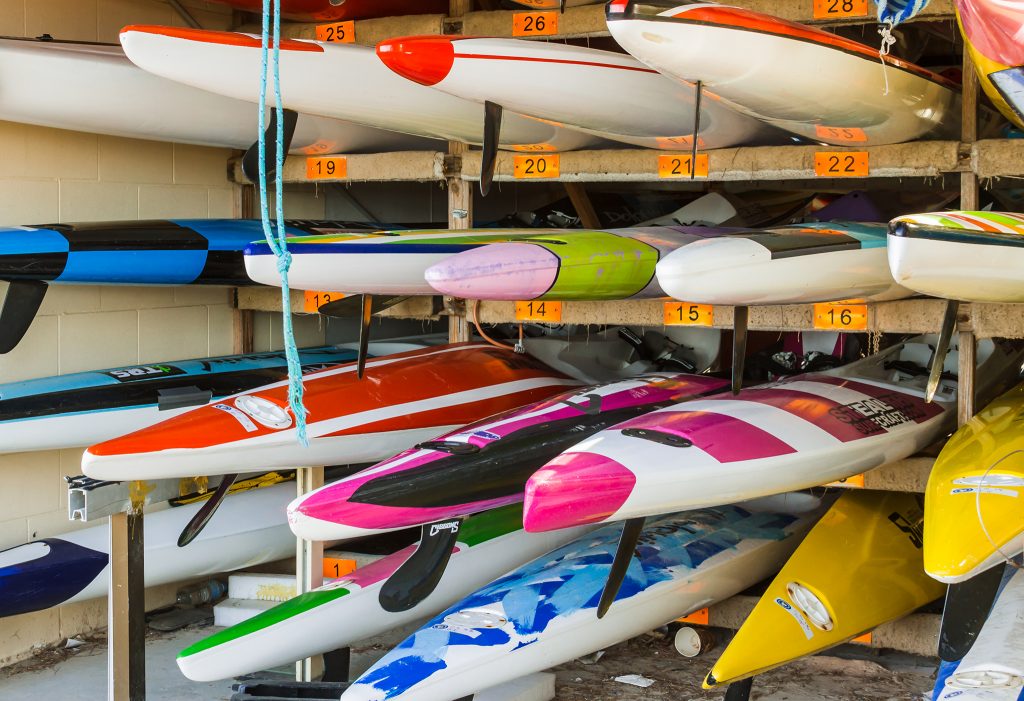 Stand up paddle boarders muscle their wave rider beyond the breakers, either heading parallel to the shore, or turning and paddling furiously, using momentum to catch some surf time. 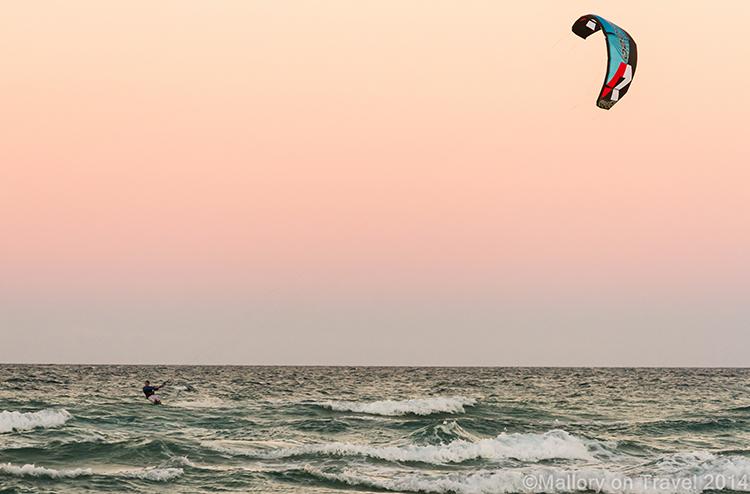 Another rider of winds 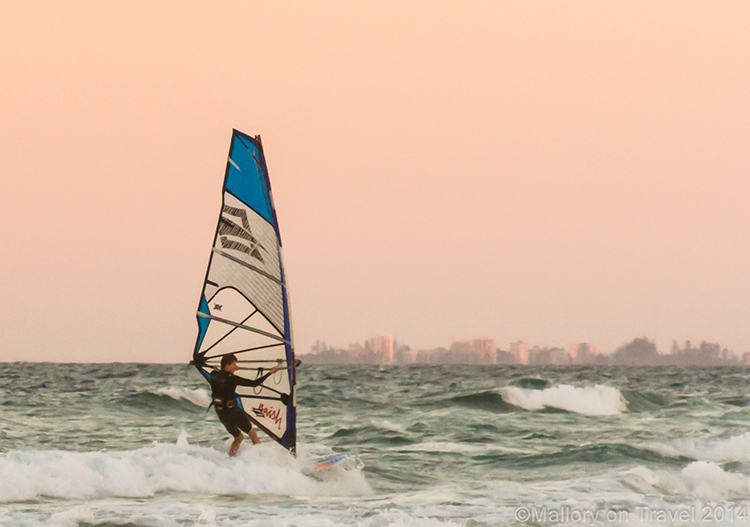 All worship the surf, revelling in the untamed, irresistible force of the ocean, capable of providing a thrilling ride one moment, or knocking the wind out of the unwary with a slamming, unforgiving wall of water another. 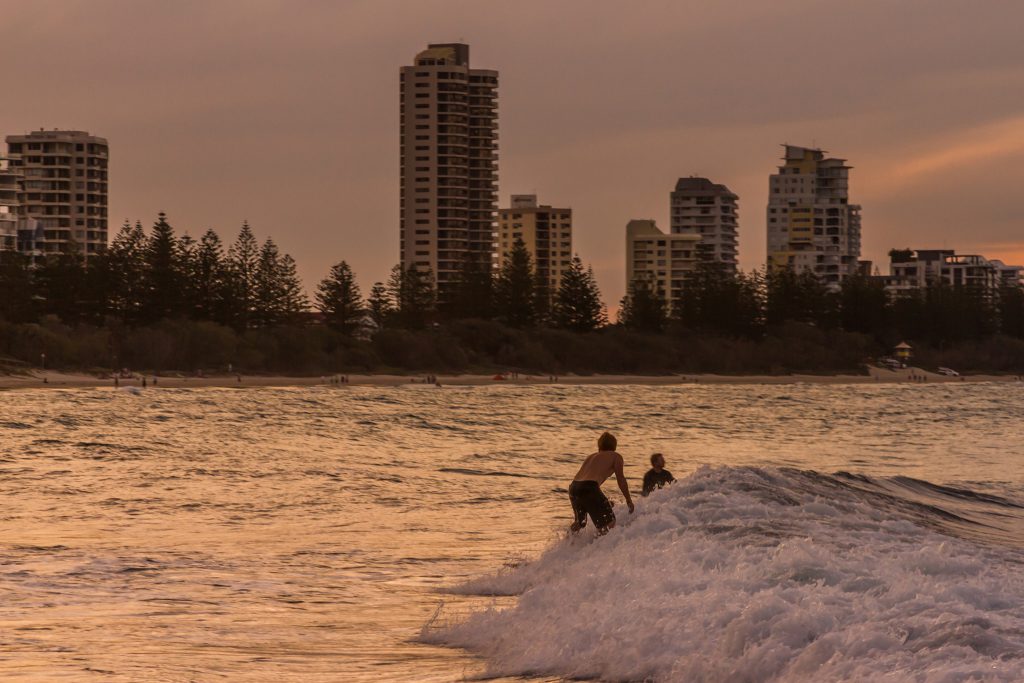 They will stay as long as possible, eking out every possible moment, hoping for the ecstasy that one last perfect barrel, showing no wish to leave. Then, when the sun descends once more below the horizon, many will be back, eager for an epic end to the day, maybe hoping to spend sometime in the *green room.

This is Queensland’s surf culture; Australia’s fraternity of the waves, Gold Coast style. 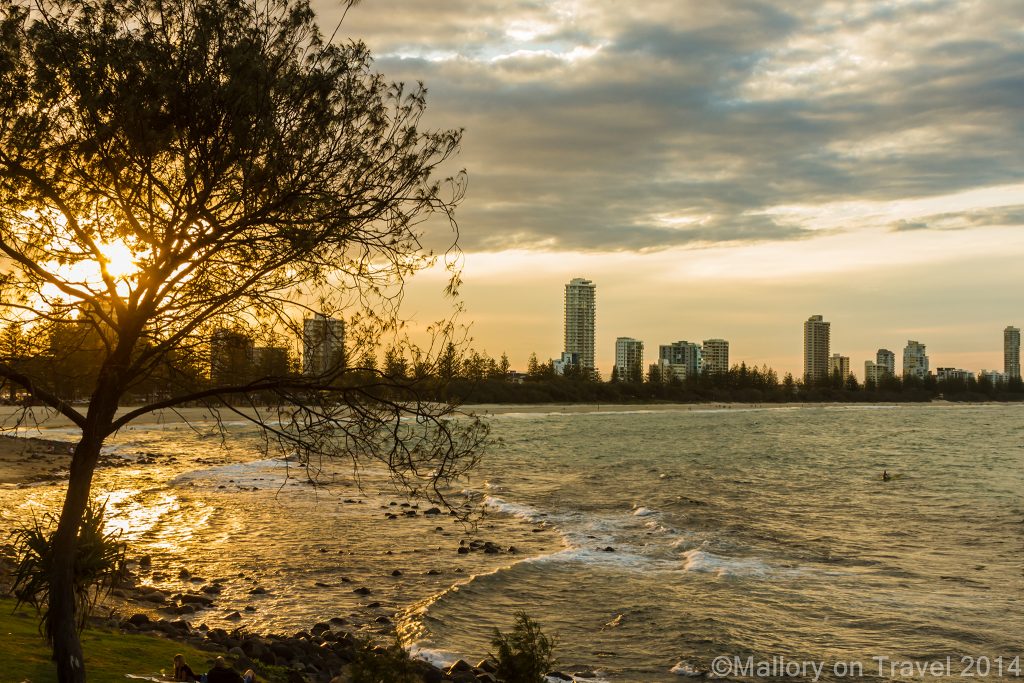 *green room – riding inside a tube or barrel.