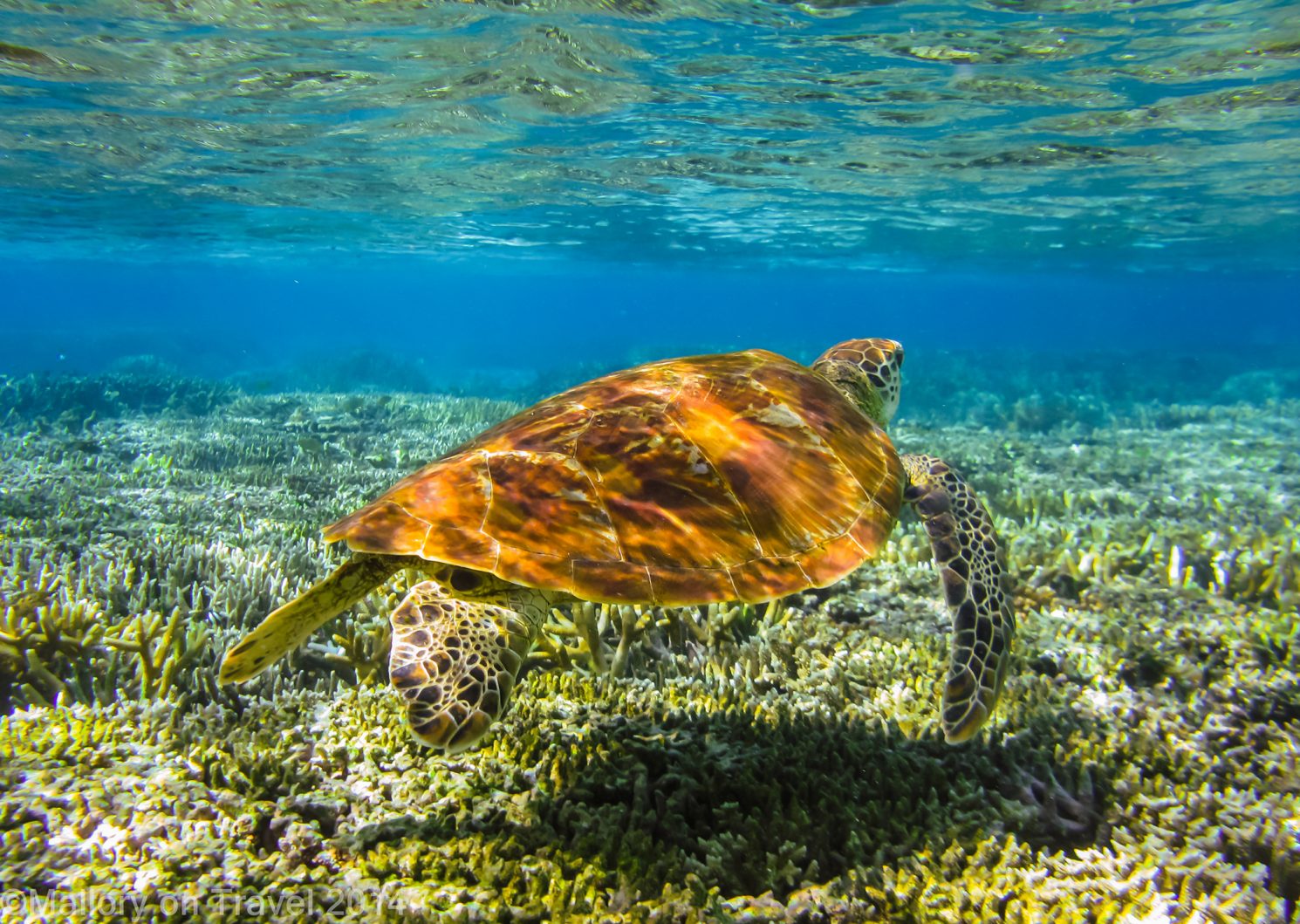 As our pilot circled the small atoll of Lady Elliot Island in our Cessna Caravan, we strained to get a better view of the patch of vegetation in the middle of the endless blue of the ocean. Amid Queensland’s Great Barrier Reef,  it was easy to spot the ‘halo’ of fringing reef which surrounds the island, before long we’d be snorkelling over the drop-off and between the isolated outcrops dotted over the sandy seafloor. 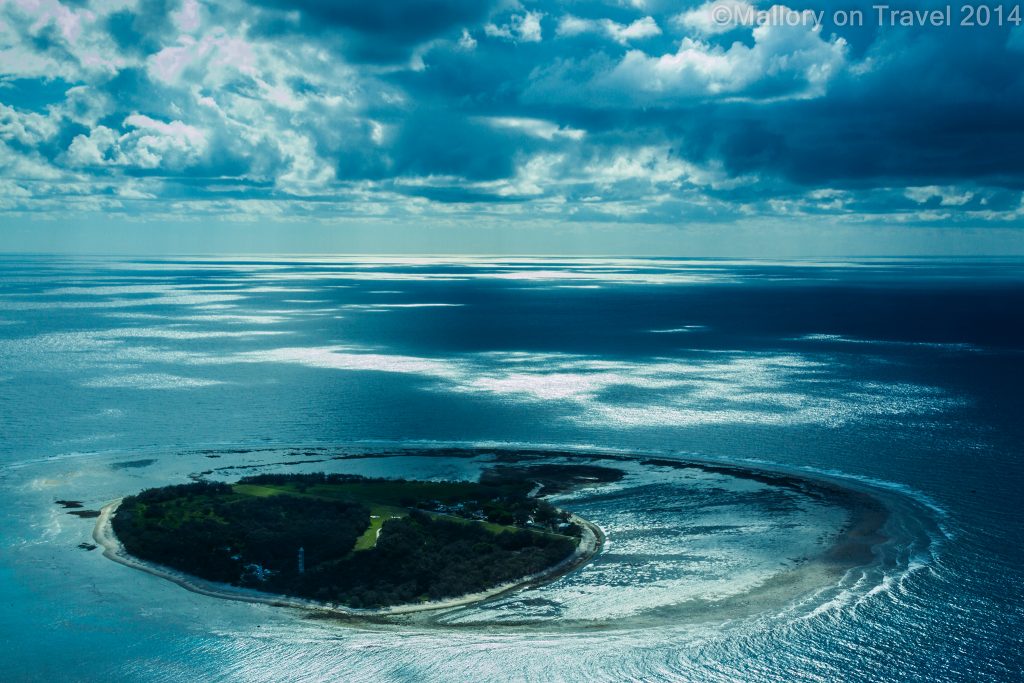 Lady Elliot Island is known locally as the home of the manta ray, because they are relatively common, and visit all year round. This is due to it being a huge cleaning station, many smaller fish tending to their larger brethren at various, smaller ‘stations’ all around the island.

Seeing a manta ray gracefully ‘flying’ through the water is one of diving most exciting experiences, and I was certainly excited at the prospect of this. Though hanging with equally graceful, and enigmatic turtles seemed just as appealing, everybody seemed keen to get wet. 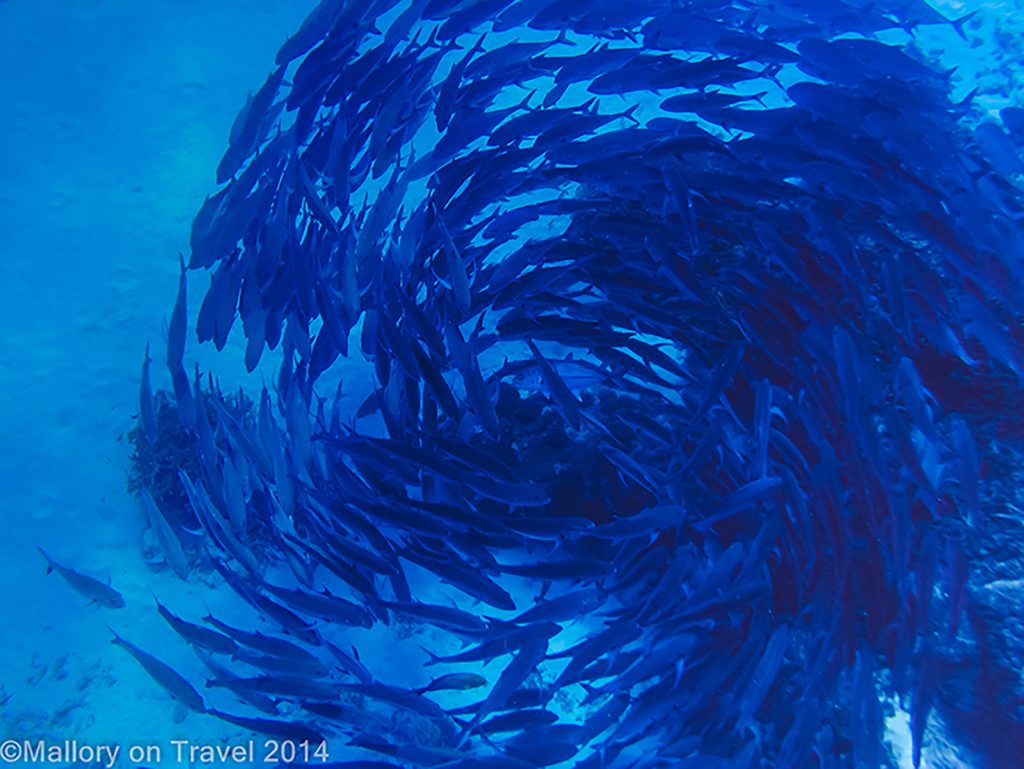 After short safety, and orientation briefings we were wading out to the glass-bottomed boat that would take us out over the drop-off, and provide a glimpse of life beneath the waves. There was an enormous variety of healthy corals, brains, table tops, antlers, and fans, which was only surpassed by the numerous species of fish that teemed over the reef. There were also hundreds of soft, elongated shapes lying on the sea floor, types of sea cucumber, but watching through the glass was merely fuelling my eagerness to get into the water.

Fortunately we didn’t have to wait long, the boat anchored and a dozen or more excited swimmers, fitted fins, spat into masks and jumped in eager to at last explore the Great Barrier Reef for ourselves. 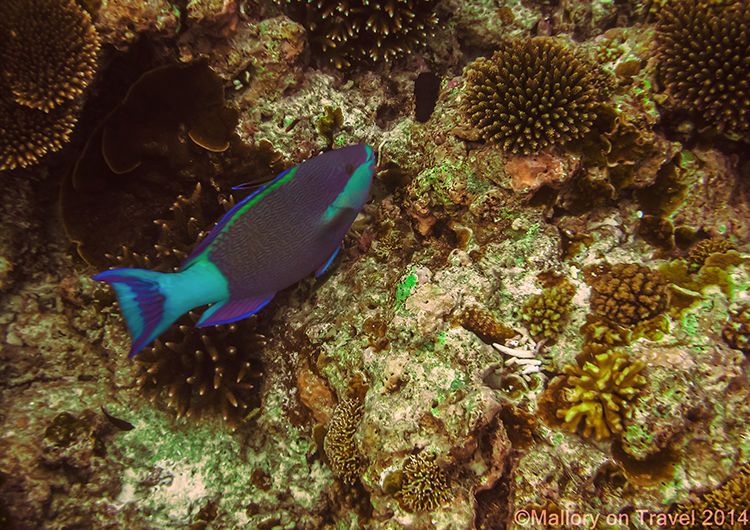 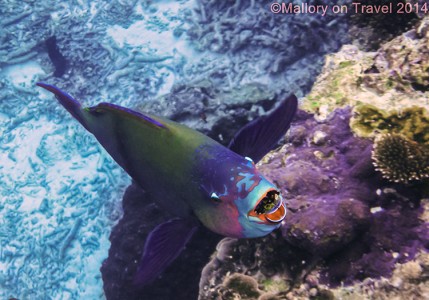 Vibrantly coloured fish darted, hid, searched for food, and fed among the brittle, razor-sharp branches of the corals. The were brilliant blues, iridescent yellows, and oranges, dainty damsels, elegant angels, and strange looking parrotfish. They ranged in size from tiny banded clownfish, hiding among the protective arms of anemones to regal groupers, several feet in length, hanging, as if suspended in the water, waiting for cleaner fish to finish their maintenance tasks. 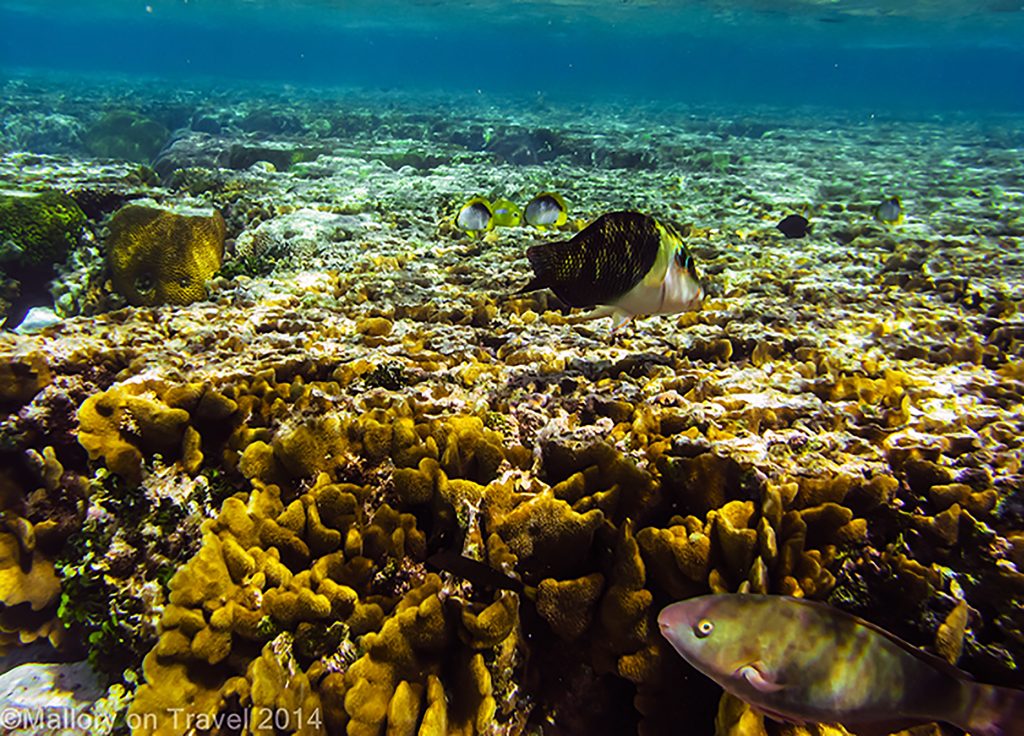 At one point there was a large shoal of circling fish, tightly packed like the bait balls often seen on natural history programmes, but there did not currently seem any predators for these particular big fish near a small atoll. Eventually they broke off from their circling and streamed across the open sand, still tightly packed, so it did seem a defensive strategy. 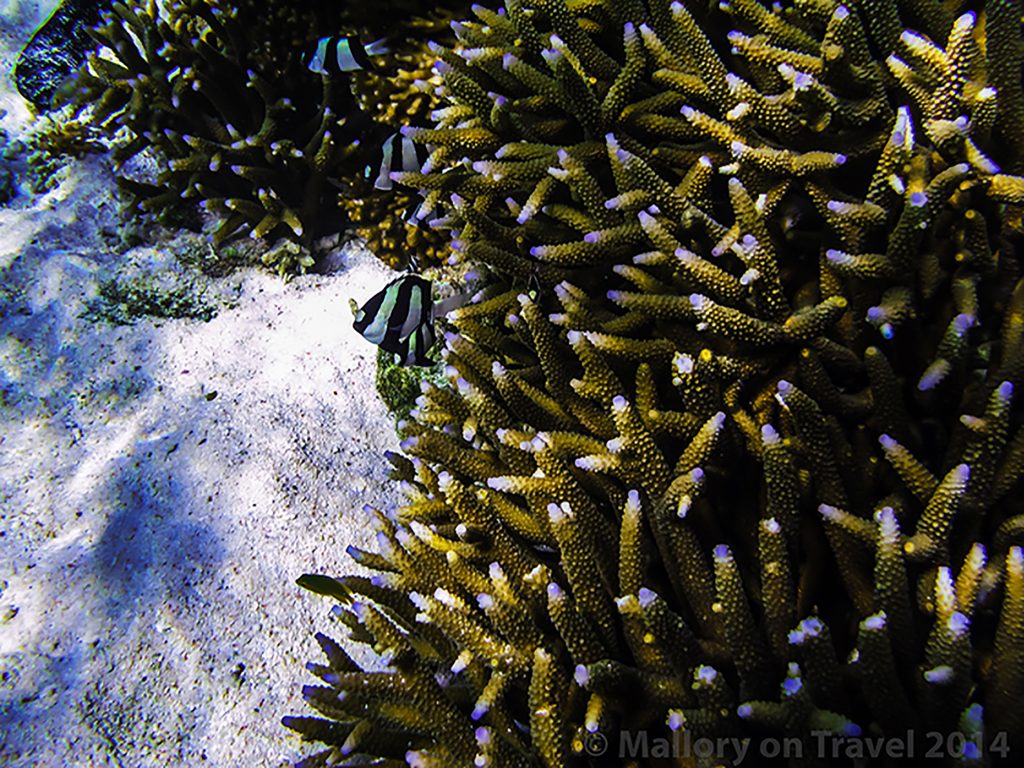 Hide and seek in the branch coral

The time in the water was all too short however, we were soon back aboard the boat and heading back to shore. There hadn’t been any manta rays, and I was one of the few aboard that hadn’t seen a turtle.

Determined to see at least one of the reefs iconic creatures, once ashore, I grabbed my fins and mask and entered the water once again. There were plenty more fish encounters, including another huge grouper and a tiny box-shaped puffer fish. However, mantas and turtles were conspicuous by their absence, maybe today wasn’t to be my day. Eventually with skin wrinkled like a prune, it was time to head ashore once more. 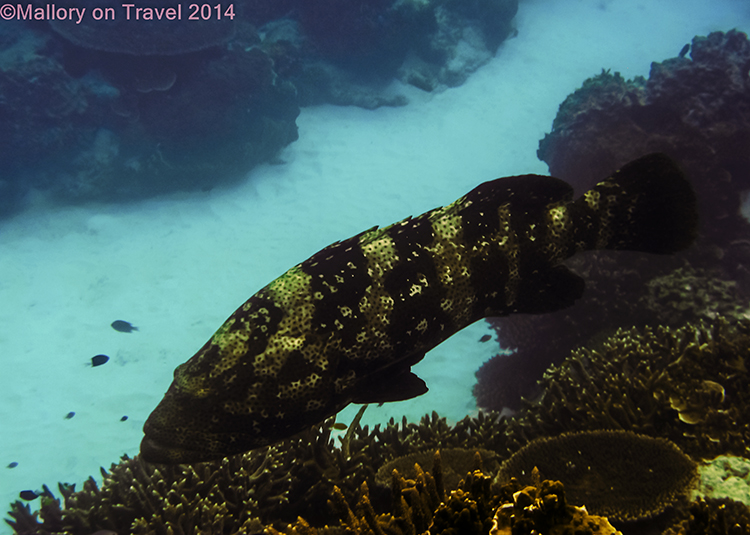 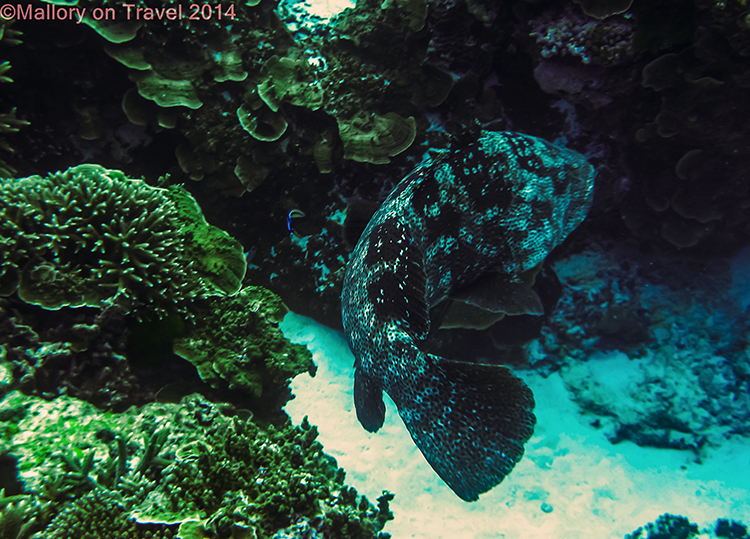 After a hastily grabbed lunch, my stubbornness kicked in again, and soon I was getting wet once more. This time, as tide was on the rise, the lagoon on the other side seemed likely to provide some success, if not for mantas, at least for turtles. However, it was not until just before we had to get ready to catch the flight back to the Gold Coast that I finally got to hang with a turtle. 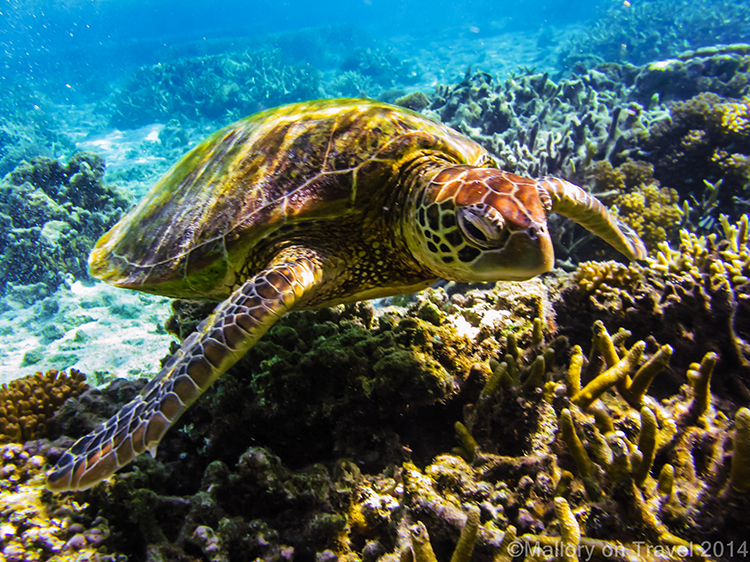 Up close, and personal 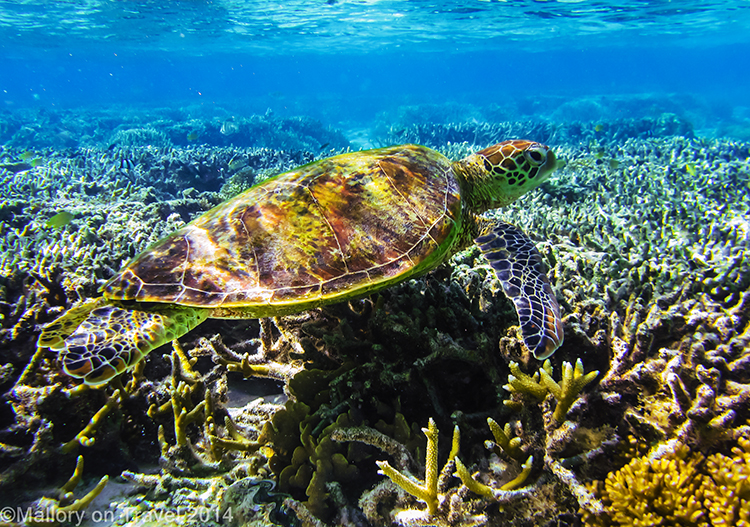 Glider on the currents

I spent a magical few minutes swimming within touching distance of the graceful creature, absolutely enthralled, as it glided above the coral reef. It seemed to fly in the channels between the plateaus of coral, riding the currents of the shallow, warm water in the lagoon. The turtle did not seem distressed by my close attendance. However, after several minutes it seemed fair to leave it in peace, grateful for it’s patience, and that my persistence had eventually been fruitful.

It was a happy mixed band that flew back to the Gold Coast airport sometime later, but one, sat in the front seat wore a particularly large, cheesy grin. 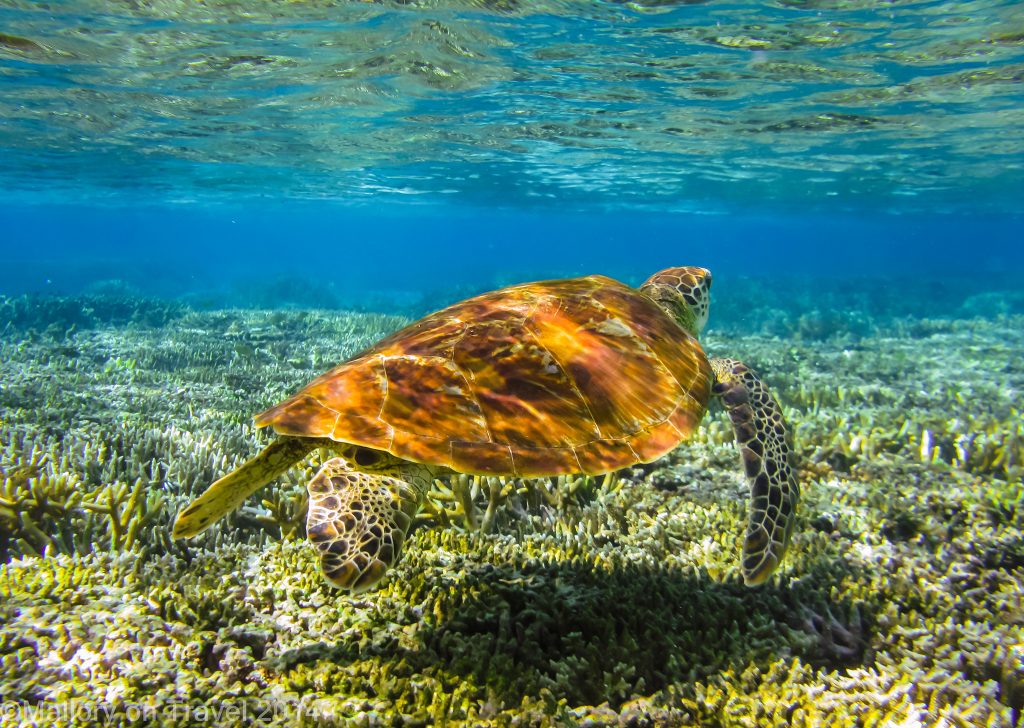 Off to the deep ocean

*This trip was organised by Lady Elliot Island SeaAir