“These rocks are quite hard” was the immortal statement made by Doug one of my trekking companions on the Larapinta Trail in the Northern Territory of Australia. We were sitting on several of the mineral culprits at Counts Point, and while I understood what he meant it made me chuckle for rest of the trip. His comment is especially understandable as there is plenty of sandstone around his home of Sydney, one of nature’s softest rocks. 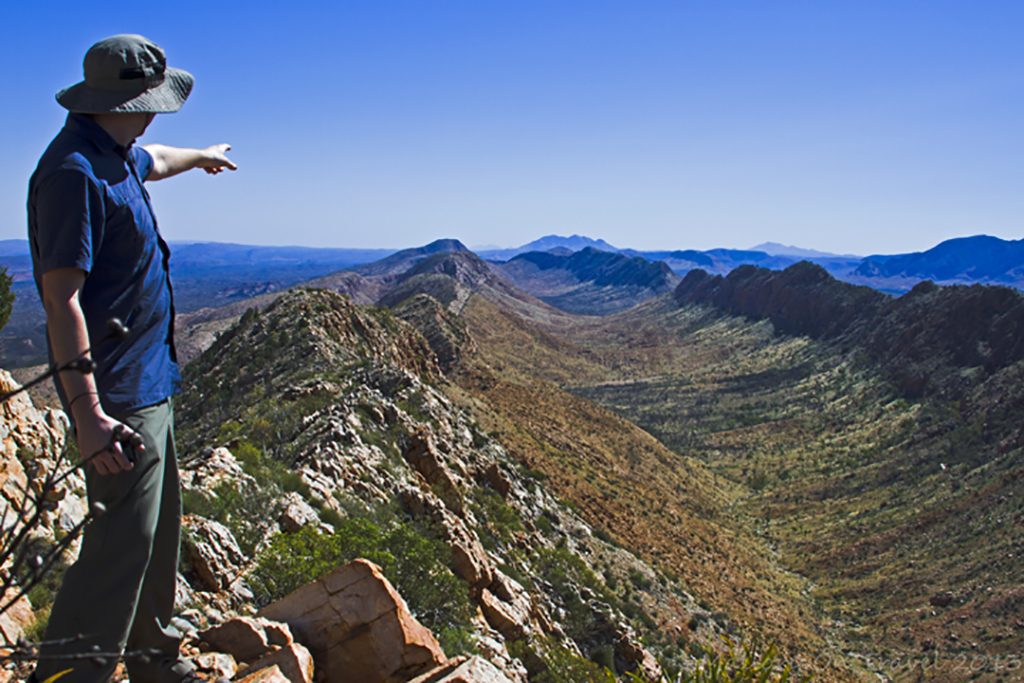 Our little mixed group was spending three days experiencing the highlights of the Larapinta with World Expeditions. We were midway through our second day, and were just beginning to feel comfortable with each other. I appreciate how a group of strangers, can so quickly bond and feel at ease enough to share some banter. It’s possibly a result of sharing great experiences, or maybe just human nature, we really are sociable creatures. 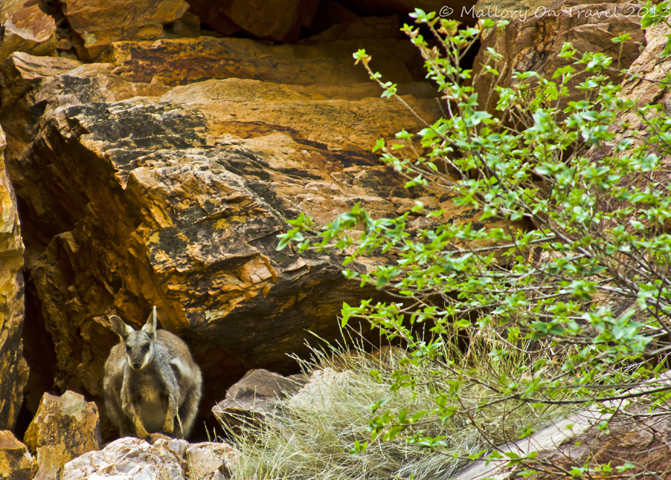 The Larapinta is one of Australia’s great hiking trails, 223 km long it follows the West MacDonnell Ranges, split into 12 sections, taking up to 19 days to complete. It offers bushwalking along rough trails, with spectacular scenery, and has a growing reputation among trekkers worldwide.

Our guided tour treated us to the highlights, but setting out along the first section from the Telegraph Station near Alice Springs, we would visit Simpson’s Gap, rock wallabies and Standley Chasm.

We spent two nights camping in comfortable sites with shower facilities and the added bonus of a series of stunning sunrises and sunsets. These were certainly a highlight, skies filled with orange hued clouds, changing before our eyes, cloaking the surrounding landscape in a shroud of soft, glowing light.

Getting hot water for a shower from a ‘donkey’ is an experience in itself. I’m not going to say anymore, you’ll have to do some Google research.

The second day was the longest and toughest, taking us from the evocatively named Serpentine’s Gorge to the view from Counts Point, it was well worth the effort. Even if the rocks didn’t provide the most comfortable spot to witness it from. Looking down from the lookout, the narrowing ridge-lines of the West MacDonnell ranges are impressive. The lookout is so named because it was the point from which they surveyed and counted the mountains of the region. There are several peaks in view, including Mount Sonder in the distance. 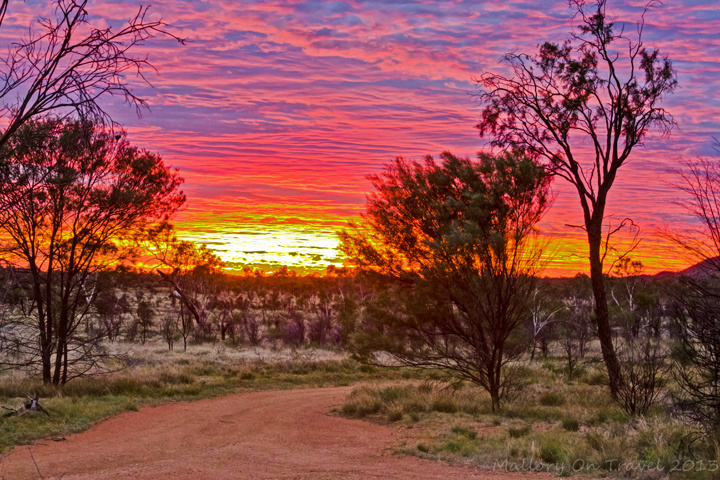 Up for the rising sun 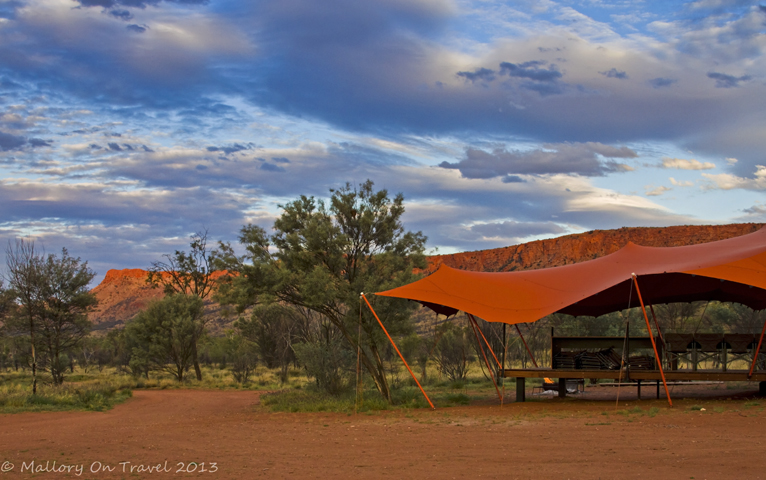 Moody skies on the Larapinta

Our last day hiking a circular route around Ormiston Gorge, known as the Pound Walk. There are a couple of waterholes to visit along the way, and even a chance to swim in one near the finish point. The perfect way to end any trek, it wasn’t the end of our experience however, there was one final highlight. after a short drive we were soon suitably impressed by the Ochre Pits.

The Ochre Pits are a sacred site to the western Arrente people; they are an important source of the mineral, used extensively in ceremonies and traded with other clans from other ‘countries’. Only certain men are permitted to collect the highly valued ochre from these pits, which is especially soft, vivid and with a sheen absent from other ochre. Evidence of quarrying is clearly visible, and the colourful rock which appears crimson and even gold in appearance. 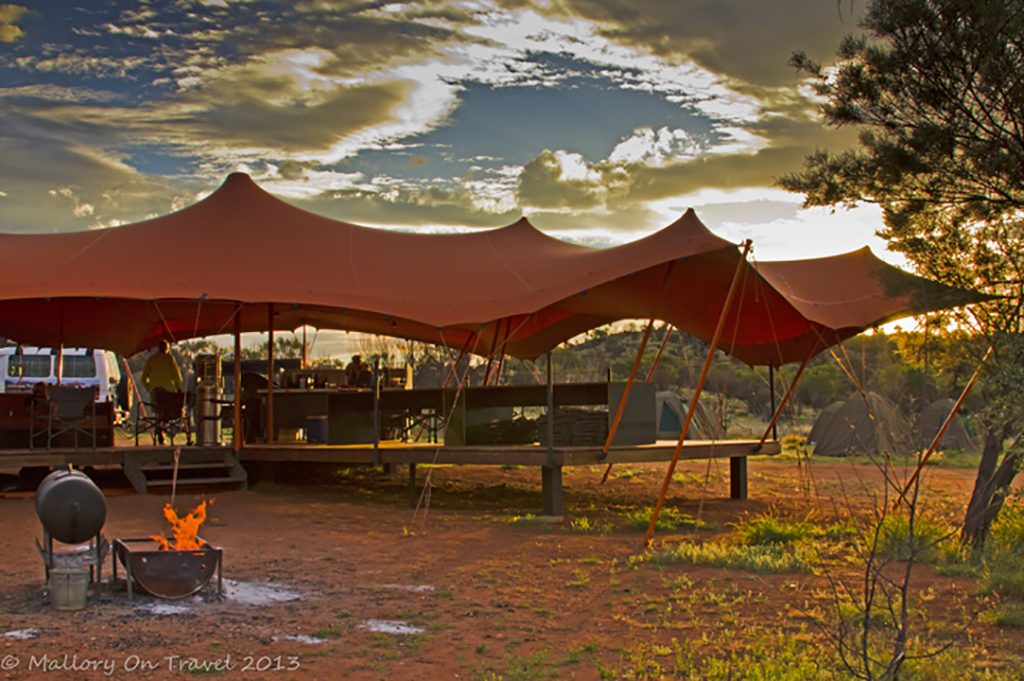 Our guides were two young Tasmanians; their typical Australian exuberance enhancing the experience. They were a fun pair, looking after us with some surprisingly good meals, driving us between trekking points and of course on the  trail. It is completely different from mountain guiding in the United Kingdom and Europe, that require a great deal of expertise; mountaineering skills, navigation and an in-depth knowledge of the flora, fauna, geology and history of the region. 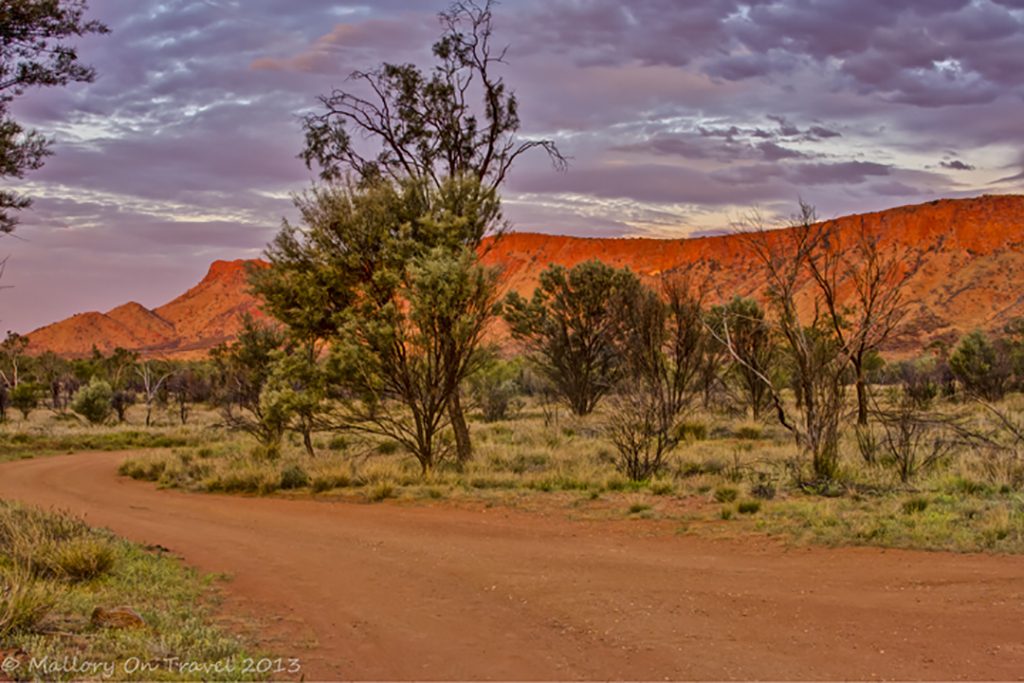 The information provided while hiking was often limited, in fact, at times there were relatively long periods without being any commentary. This is trail walking however, a different culture of guiding, there is little need for navigation as the trails are well-marked and it’s even less likely mountaineering skills are ever needed.

More commentary would have been useful along the trails, learning about the surrounding landscape, which we passed through. We often chatted within the group, learning a little about each other. There were also plenty of opportunities to simply enjoy the trek, soaking up the landscape, retreating into some introspective thought. 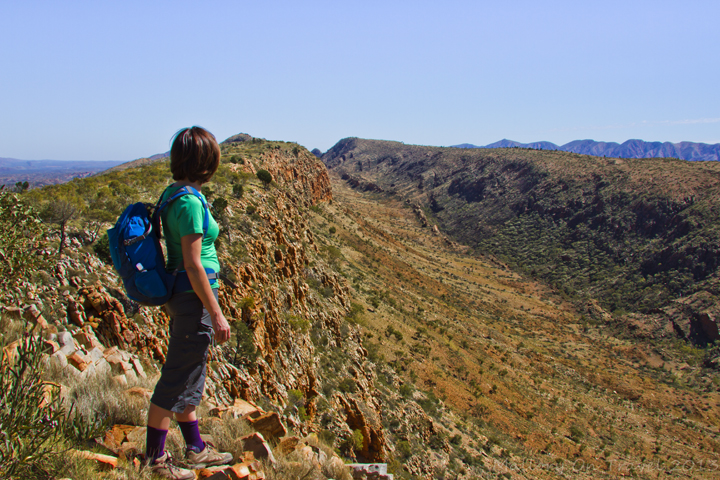 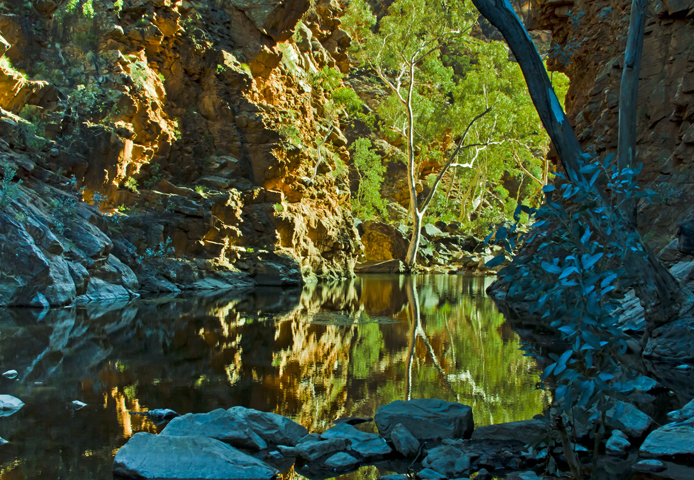 Reflections and shadows in Serpentine Gorge

I was slightly surprised that we didn’t see many lizards, just a handful in the three days. They were probably just beginning to emerge from their winter hibernation. Our guides warned us at one campsite about “Monty” a large monitor lizard that had a fondness for sharing camper’s tents. This led to a variety of jokes about ‘spooning’ with Monty, mainly from me. 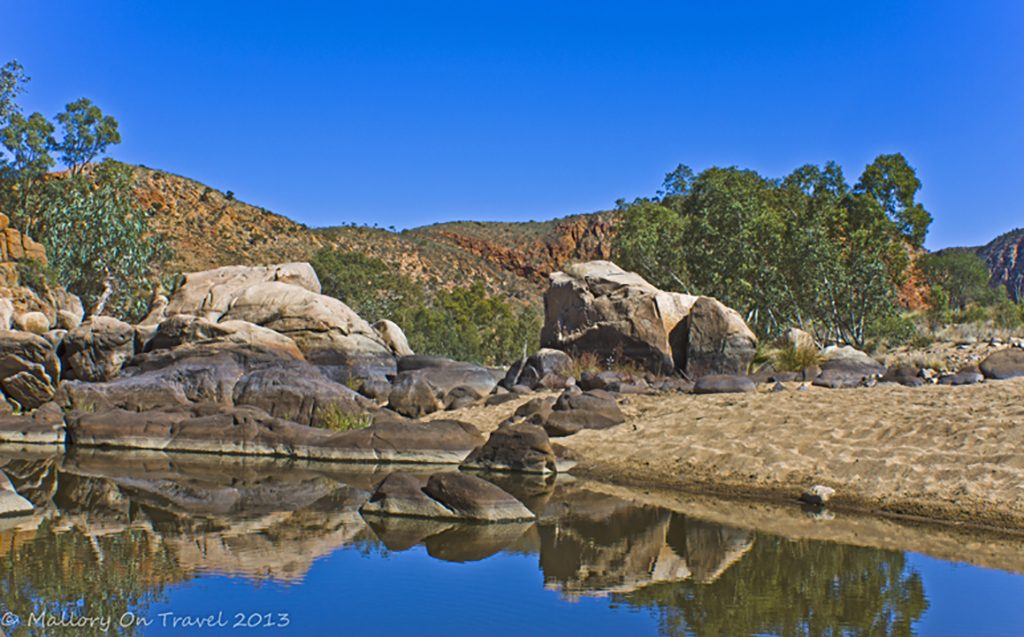 The only problem with taking a highlights tour is that it leaves the trekker hungry for more. The sights are great to witness, but it’s difficult not to think about everything missed. I can remember looking from Counts Point lookout towards Mount Sonder, and hoping one day to reach it’s summit just in time to experience a special sunrise. 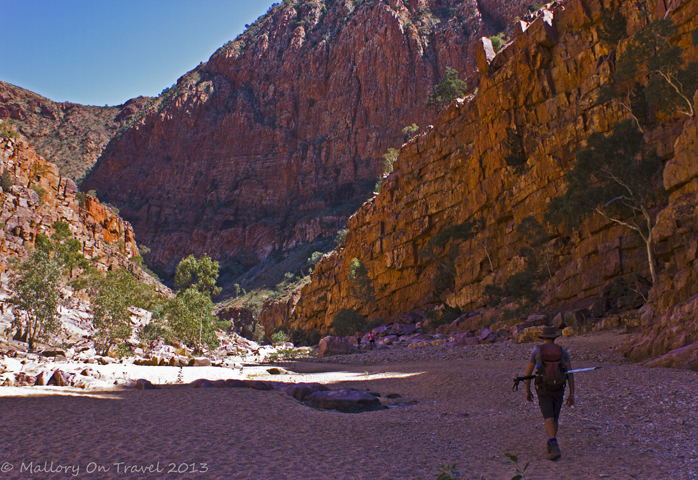 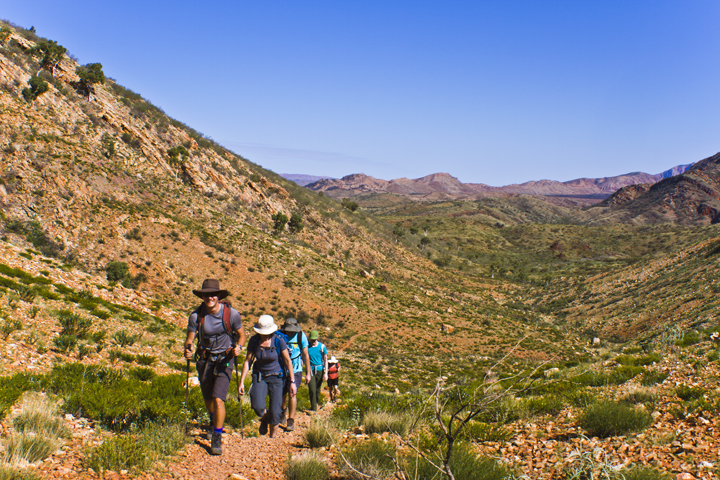 An early morning ascent of Mount Sonder is the usual finale of  more than two weeks of trekking for those completing the Larapinta. It’s an ambitious project, requiring trekkers to carry several days of rations and all their equipment with them. Clean drinking water is the biggest challenge in the arid region, it will need boiling from the sparse waterholes and many have support teams which provide food and water caches along the route. 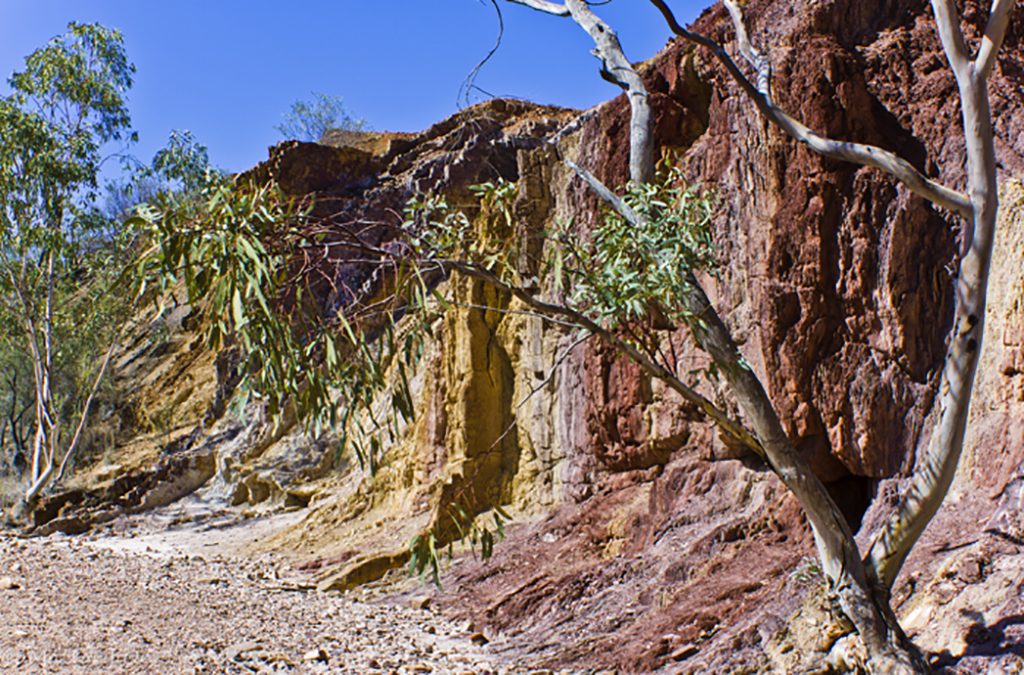 Colourful rocks in the Ochre Pits

Even in winter, a tent isn’t essential however, the dry conditions allow for nights spent under the stars with a suitable sleeping system. A good hammock seems a great lightweight option, but sturdy footwear and a first aid kit are essential. Temperatures in summer can exceed 45°C, so any of the other seasons is a more sensible time to attempt the traverse.

Are you a ‘donkey’ veteran, or completed the Larapinta? I’d love to hear about it, share your experience in the comments. 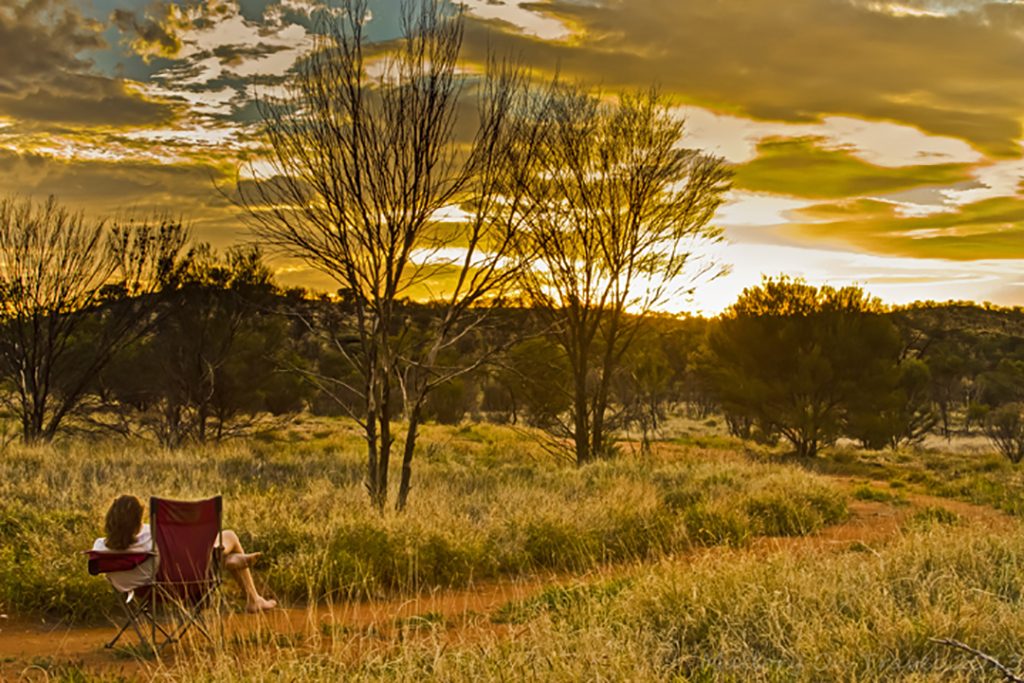 Sunset and a good book