Photographers maybe described as modern-day hunters, thankfully only shooting with a camera. Touring the Bay of Fundy this week despite plenty of talk about iconic moose the only chance to see one had been on beer bottles, coffee cups, bronze statues or stuffed trophies hanging on walls. 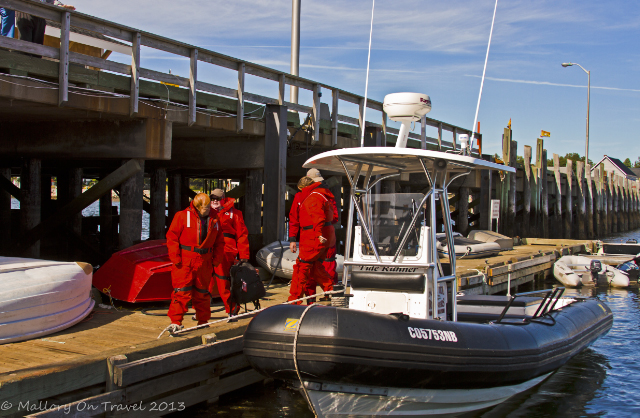 Fashion statements and a water chariot

Bald eagles had made themselves available for photo sessions, and for a European they’re majestic and exciting, but are fairly common here. Any animal encounter is exciting, the circumstances often making a difference.

Fortunately whale watching, offers some animal attraction. I never tire of the hunt, spotting a whale in the distance, trying to anticipate their behaviour, and aiming to be nearby when they resurface  again.

Our group were guests of Fundy Tiderunners. Operating out of St Andrews, they play cat and mouse with great whales in a zodiac several times daily. We wore fashionable, bright orange survival suits to wear while enjoying an exhilarating ride out to nearby islands. We were hopeful of an opportunity to view fin, humpback, minke, and if very lucky even right whales. 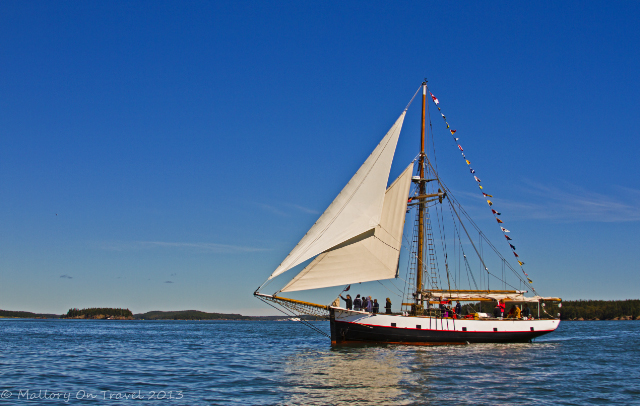 There are five boats operating out of the town, all the skippers know the likely spots but the best will anticipate the possible direction and where the whales are likely to surface again. It’s still pretty hit and miss though, these are wild animals and haven’t read the script, close-up encounters are often sheer good luck.

Most of the trip consists of every member of the temporary ‘crew’ scanning the horizon intently. We were all hoping to be the first to spot a tell-tale blowhole. This is usually the first sign, followed quickly by a broad back-breaking the surface, suddenly everybody on board jumps into action, snapping away, hoping to get the ‘money shot’. As the whale is usually way in the distance, the skipper soon guns the engine into action trying to get ahead of the huge animal for a better view. 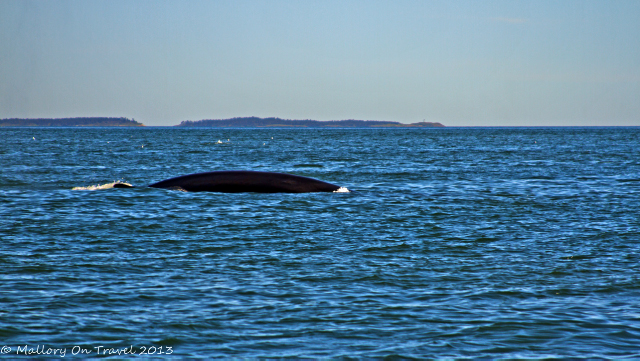 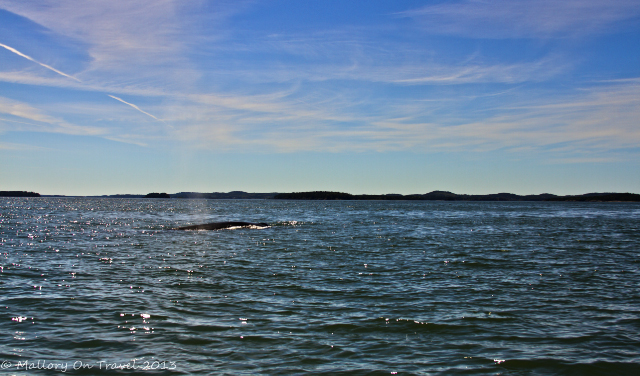 Our usual view of the whales

It’s great fun, even when the whale is especially coy, only surfacing far away from the boat, just zooming around in a zodiac is an exhilarating experience. It helps if the skipper is also entertaining, and Dave our host for the day was a comedian, keeping us amused throughout the trip. His jokes got progressively more corny, but that just seemed to make them even funnier. My personal favourite; a pirate sporting a ship’s wheel as a belt buckle, which was “driving me nuts”. 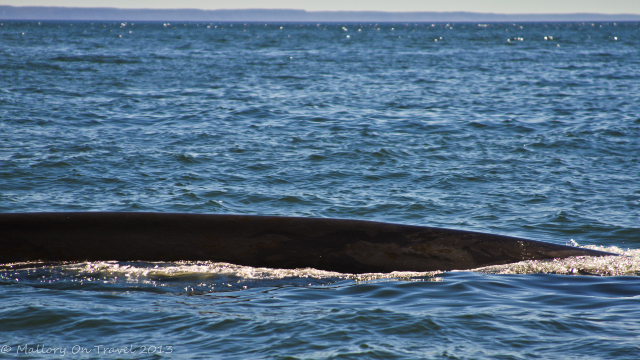 Close encounter of the giant kind

We saw a small minke, dozens of leaping porpoise pods and several fin whales, one of which we stalked for about an hour. These are the second largest whales and the fastest, as big as a small submarine, they are the greyhounds of the sea. Most of the time we would witness a large back effortlessly slicing through the water as the whale took a few breaths. 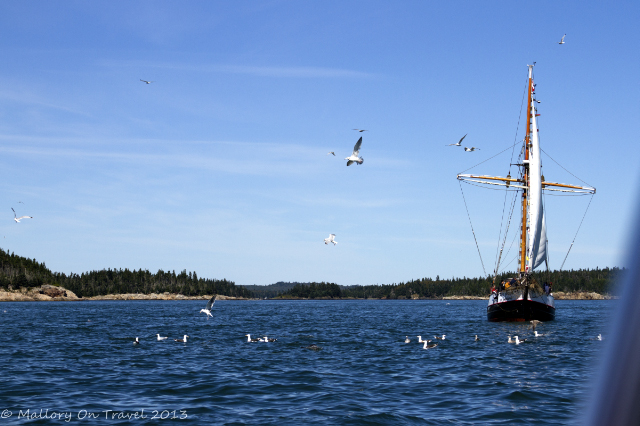 Almost to emphasise their unpredictability on one occasion our model surfaced within ten metres of the boat. This resulted in a chorus of gasps and excited shrieks from everybody on the boat. It was actually too close, I was still zoomed out expecting a distant view!

There weren’t any spectacular breechings, no signature tail flukes as the whales dove deep. Blowholes and broad backs were the order of our whale watching day. Our whales were much too dignified for crass, flashy displays, teasing us with occasional glimpses.

Speeding from sighting to sighting in a zodiac is part of the experience, usually smoothing out any waves, but sometimes crashing through any especially large rollers.

I appreciated that unlike Iceland the boats seem compelled to remain a sensible distance away from the whales, and after awhile Dave decided we’d pestered this particular animal enough and went in search a different leviathan. We failed to see anymore whales, but I thought this was the right attitude. It was still a boatload of happy watchers that offloaded to the dock at the end of our two-hour adventure. 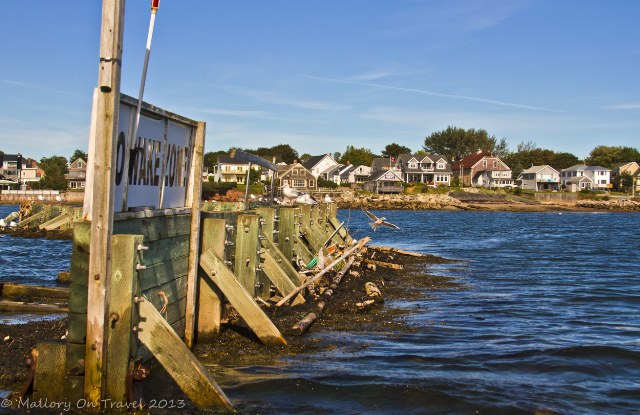 We’d also witnessed a thousand ladybirds being released. They will act as a natural pesticide, controlling the aphids, which they prey upon. This occurs every day during the summer, with the help of the Kingsbrae mascot, a five foot tall, furry ladybird. We followed this with a relaxed stroll, enjoying the other attractions, which included impossibly cute alpacas, a Dutch windmill and a sculpture garden filled with several quirky but often cool works of art.

It is also home to a Wollemi Pine, which is one of the oldest and rarest tree species in the world. Growing when the dinosaurs ruled the earth, and presumed extinct until a bushwacker stumbled across them near Sydney in Australia. The one displayed here maybe the only ‘caged’ tree I’ve ever seen, it protects the precious plant from visitors taking cuttings. 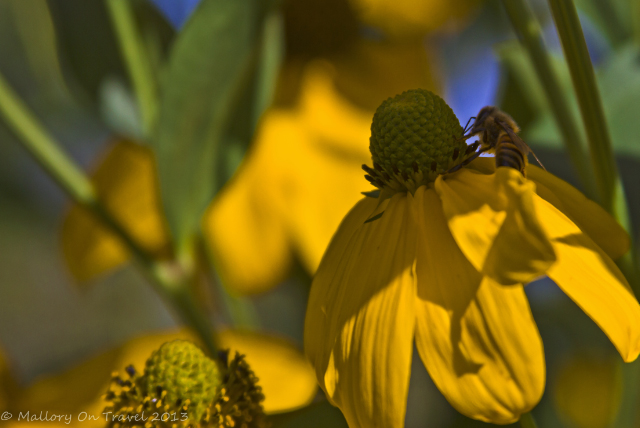 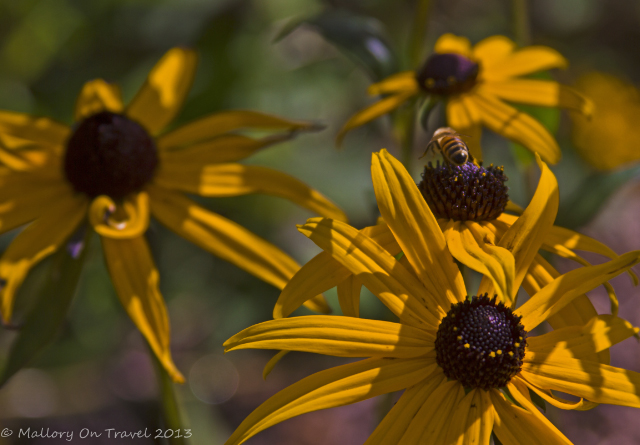 The many flowering plants attract many bees and other nectar loving insects. I spent several minutes stalking various hovering beasties in search of a good photograph. This may seem less exciting than whale watching, but involves most of the same anticipation and yes even excitement. The bees are more visible, but  rarely make more co-operative models than the whales. As perfect composition and focus is achieved, the bee usually decides it’s had enough, and moves to the next flower.

Modern day hunters, armed only with a camera enjoy stalking their quarry regardless whether they are great or small; besides all things are bright and beautiful. 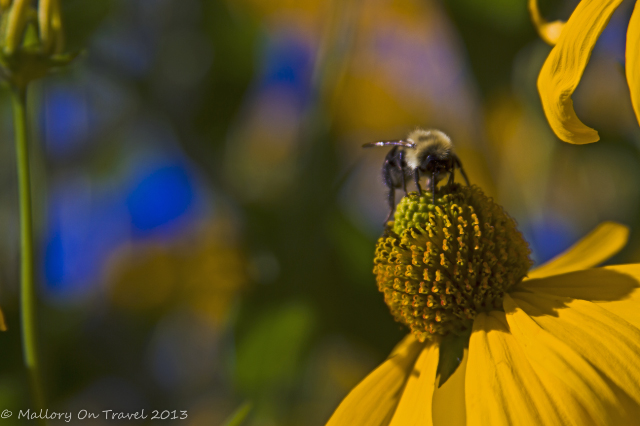