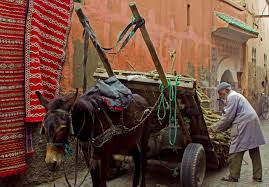 This might seem to be a surprising choice of image to represent the bustling Moroccan city of Marrakech. Maybe an image of the amazing Djemaa el Fna square, perhaps a colourful fabric or spice stall from the surrounding souks may seem more appropriate.

These seem to be the foundations of the North African culture, hives of frenetic activity and tourism, the reason that most travellers visit both Marrakech and Morocco. Djemaa el Fna is the cultural epicentre of the medina and a recognised UNESCO site that numerous visitors seek to experience. Tourists amble between the many islands of story-tellers, street performers and hawkers attempting to avoid the attentions of tenacious monkey wranglers and snake charmers.

“the pungent reek of the nearby tanneries”

The souks which surround the square on 3 sides can provide a welcome diversion from the constant harrying and overcrowding of the famous plaza. Seemingly haphazard but actually arranged into separate souks selling leather ware, jewellery, and vibrant fabrics where the aroma of fragrant spice stalls drifts between the labyrinthine aisles. Delicate saffron, cumin and cinnamon permeate the air. More powerful perfumes from ginger and turmeric which may even expunge the pungent reek of the nearby tanneries producing the raw leather from which the skilled artisans produce their finely crafted products.

Merchants here seem slightly less determined than those in Djemaa el Fna. The Moroccan government has introduced legislation to protect tourists from over zealous salesmen. However if provided the merest whiff of encouragement will eagerly pounce upon any opportunity to open a negotiation.

I’ve always perceived Marrakech has always one of the romantic destinations, to be included along with Cairo, Zanzibar, Timbuktu or Kathmandu evocative and iconic names bringing a faraway look in the eyes of travellers. The reality may not always live up to the dream, many suffer culture shock in these destinations. Tourists can soon get overwhelmed in Marrakech, escaping within a few days of arriving to other less frenetic towns. 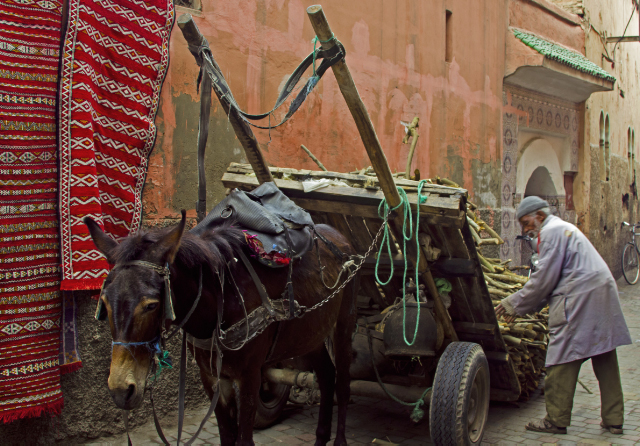 A common scene in the medina

This image does seem to represent the city. This industrious gentleman, with calloused hands and sun ravaged skin loading up his donkey drawn carriage within the narrow confines of the maze like medina. His equally hard working donkey waiting patiently, somewhat forlornly to transport it’s increased load along the narrow backstreets to the next collection point. These beasts of burden seem to criss-cross the city incessantly, often with improbably large loads either carried on their backs or towed behind them on carts. It is impossible not to feel pity for them, even those that aren’t mistreated still seem to be destined for a life of hard labour.

“well past what we consider retirement age”

Poverty is not difficult to discover within the city and travellers should be prepared to witness distressing scenes. Women begging while holding their babies and very young children selling paper tissues or small baked morsels are common but upsetting sights. Cultural immersion can  often be shocking, poverty, disease and hardship are facts of life in many cultures. Alongside the hard working donkeys are their owners, usually male struggling to provide for their families and often well past what we consider retirement age.

Marrakech still has plenty to offer travellers, many other attractions within the medina beyond Djemaa el Fna and the souks. It is well worth experiencing and suffering the unwanted attentions of the many merchants, performers and beggars. If this becomes tiresome it is always possible to spend a few hours in the new city, with modern bars and quiet parks away from the madding crowd before returning refreshed, to the full on experience of the medina.