Iceland, the Land of Fire and Ice is one of the most spectacular landscapes on the planet. Having read numerous posts and articles about the geothermal island I have yet to find a negative post. All visitors seem fond of it and almost every intrepid traveller has an ambition to spend some time on Iceland.

The main island which is located just outside the Arctic Circle and one of the most active volcanic regions in the world. It is one of those destinations which epitomises adventure, a landscape that has been forged by the harshness of it’s environment, resembling a moonscape. The coastline is punctuated by deep fjords,  the interior by active volcanoes, glaciers, powerful waterfalls and geothermal geysers.

It is also one of the world’s most sparsely populated countries with most of the population living in the coastal cities of Reykjavik, Kópavogur and Akureyri. Due to isolation in the winter the interior of the island is only inhabited by extremely hardy farmers and buildings are often few and far between.

The famous Þingvellir National Park is a meeting point of two continental tectonic plates where the Eurasian and North American continents are drifting apart. It is apparently the only place on dry land where this phenomenon can be witnessed. The rift is clearly visible, in fact it is impossible to miss and a spectacular landscape.

Iceland could equally be described as the Land of Whales and Waterfalls as it is ideal for seeing both. Dentifoss is the most powerful waterfall in Europe but there are numerous other impressive cascades including Gullfoss and Háifoss scattered throughout the rugged landscape. Whale watching is another popular tourist activity especially from Husavik in the north. A number of species of great whale can be spotted off the coast including the blue, minke and humpbacks, as well as charismatic orcas.

The opportunity to witness one of the most spectacular phenomenon on the planet is a huge draw. Iceland is regarded as a destination where the Aurora Borealis, “Northern Lights” often make unannounced and breathtaking appearances. This alone is reason enough to visit for me. 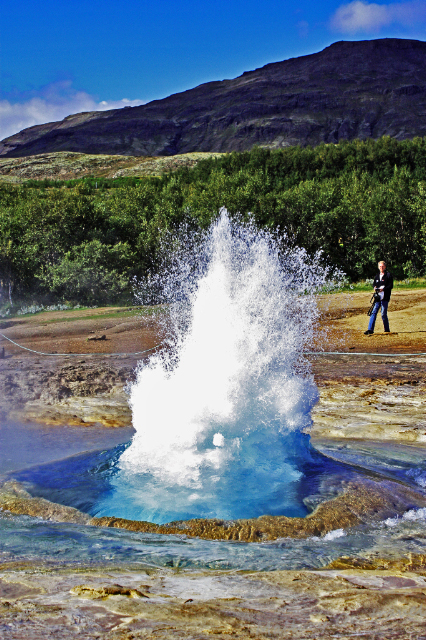 Those that are especially blessed may even see an arctic fox which is the only indigenous mammal which still survives here, the introduced Icelandic horses are somewhat easier to spot however.

The capital city of Reykjavik is an eclectic mix of architecture and fortunately a colourful Nordic influence remains evident. There is a selection of restaurants which unsurprisingly sell great seafood dishes but also traditional Icelandic dishes like lamb though unfortunately whale meat and puffin are popular on several menus. It is a city which is well known for it’s lively nightlife attracting party loving travellers from all over the planet. I preferred Akureyri in the North of the island however as it seemed more of an attractive community town. It is also home to one of my favourite coffee shops, a great colonial looking building with an equally impressive choice of pastries and cakes.

One of the Iceland’s most popular attractions the Blue Lagoon is indirectly a result of the island’s geothermal energy but it is the natural attractions which seem more appealing.

Volcanic Iceland can justifiably be considered the home of the geyser. The landscape is pockmarked with them and the name is actually derived from Geysir, one of its best known. Eruptions of Geysir are currently rare but fortunately nearby Strokkur portrayed in these images does so every few minutes. It attracts multitudes of tourists, keen to witness an explosion where the hydrothermally heated water and steam literally ‘gushes’ into the air. Each eruption is eagerly anticipated, the water begins to reach boiling point, becoming more pressurised, forming a seemingly bottomless green-blue dome of mineralised water until a plume of super heated water dramatically shoots high into the air.

The surrounding ground has been discoloured by more than a millenium of mineral deposits, the earth becoming a montage of differently hued muds. Sulphur emanates from deep within the earth and hangs heavily in the air, the frequent eruptions providing spectacular diversions from the smell.

Geysers do seem representative of Iceland, a country forged in the bowels of the earth and moulded by active geology and powerful elements. Mother Nature is a creative and impressive sculptor which uses an potent array of tools including fire and ice to perfect it’s creations. Iceland is surely one of her most impressive works of art.