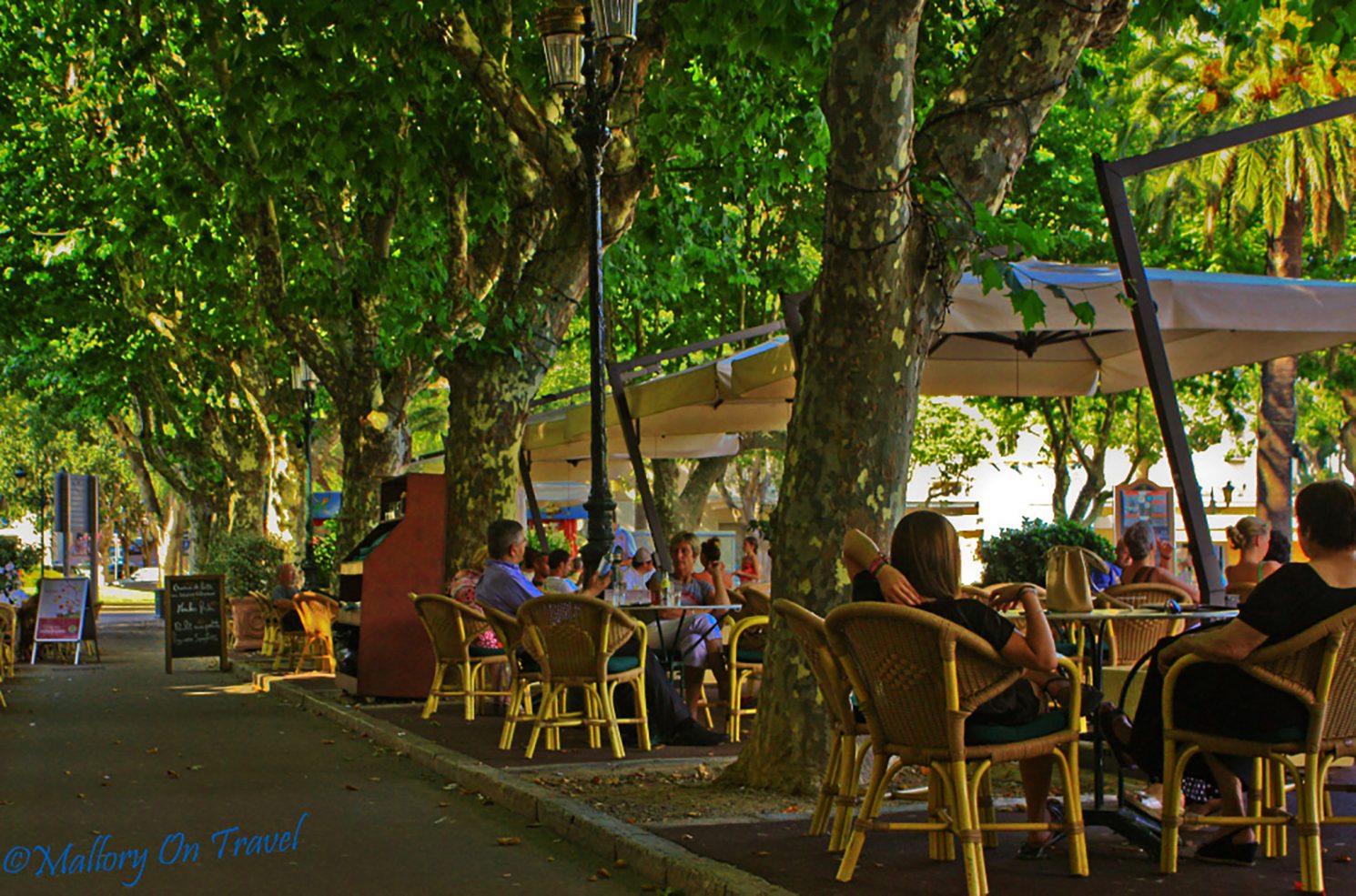 “My blood group is exceedingly common C 8H10N4O2….found in every coffee cup”

Adventures are great, exploring a new destination is amazing, browsing a souk or market fascinating these are some of the reasons we travel. However just relaxing is equally rewarding. Café culture is one of my favourite ‘chill out’ pastimes when visiting a new or even familiar destination. 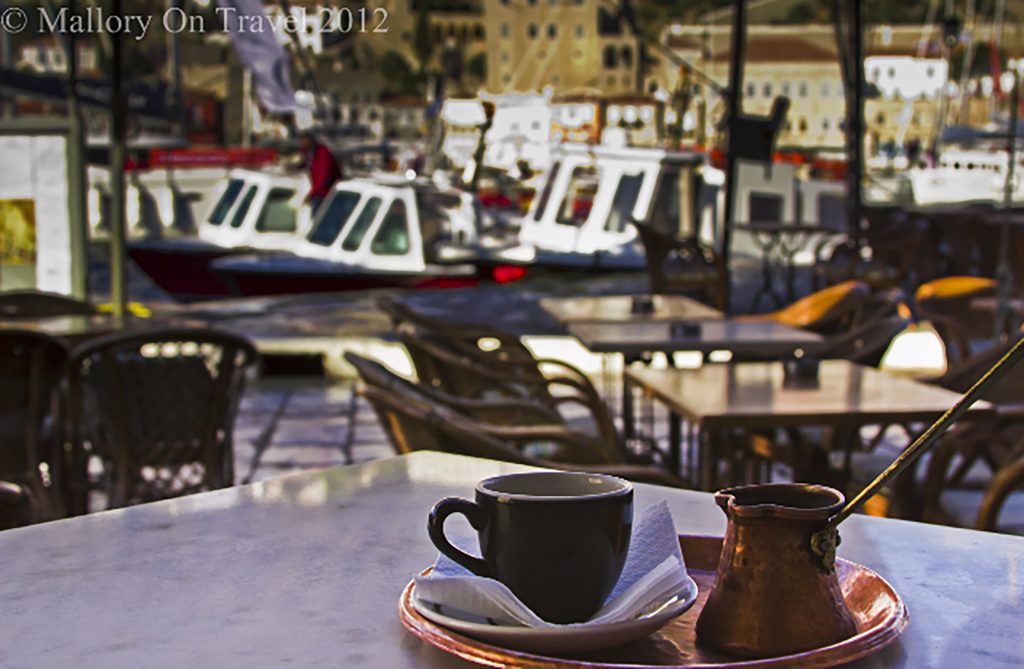 Relaxing with a Greek coffee on Hydra

Regardless of the location, Paris to Marrakech, Cairo to Vancouver the culture of enjoying a coffee is exported throughout the world and is a great way to  waste a few hours. It has become so popular that even in relatively cool climates such as the United Kingdom it is possible to enjoy a drink and perhaps a meal with some friends. 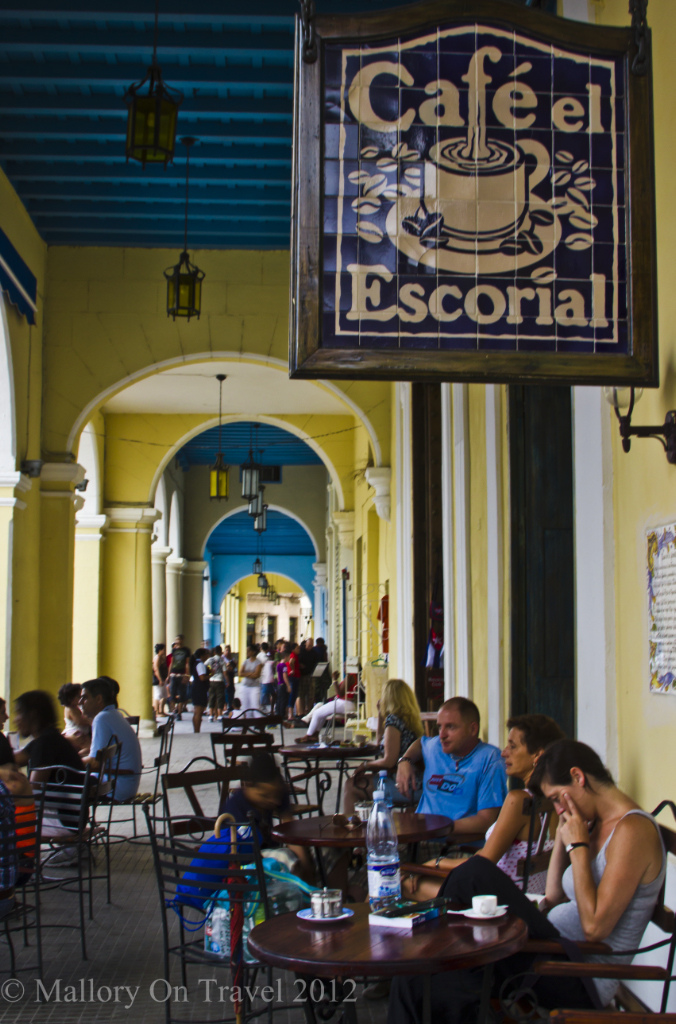 It’s origins are traced back to 14th Century Turkey, the Ottoman scribe İbrahim Peçevi detailed the opening of a coffee-house in Istanbul. As coffee shops spread throughout Europe they became the hangouts for the creative and intellectual. Theoretically they were available to all regardless of social status, even considered the “seats of English liberty” but at one time they banned women. Coffee houses such as Caffè Greco in Rome became the meeting point for artists, writers, publishers and diarists boasting an impressive clientage list which includes Mendelssohn, Wagner, Liszt, Stendhal, Goethe and even Casanova. 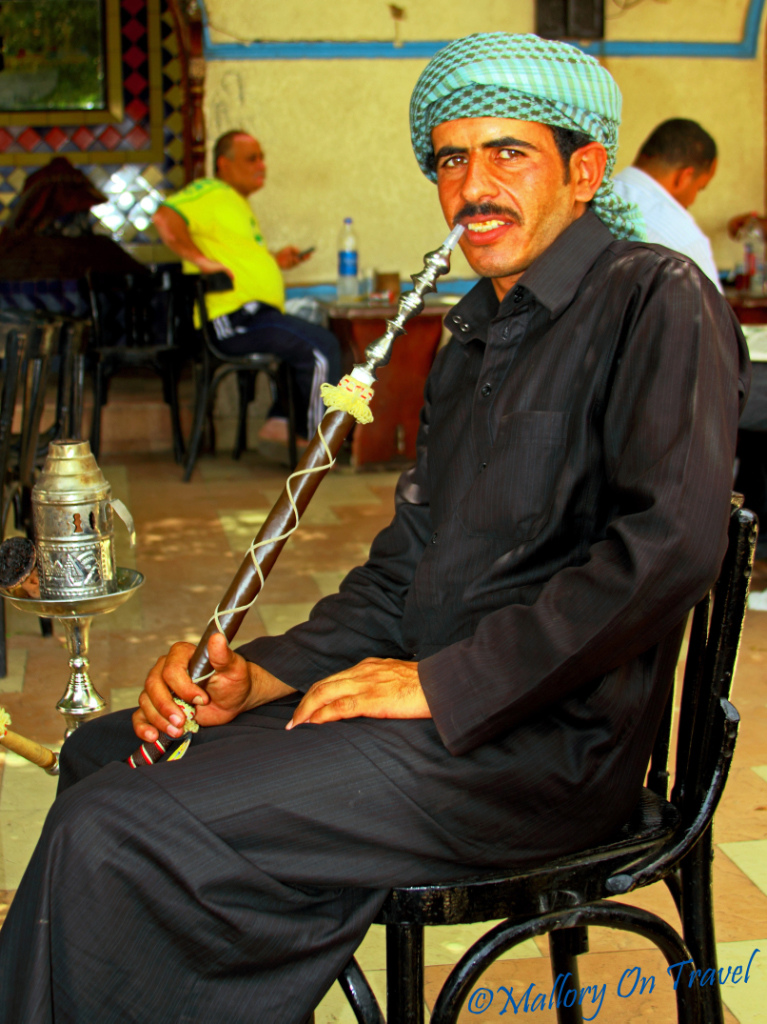 It often appears a French concept which the rest of Europe adopted later but the first English coffee-house was established in Oxford’s Queen’s Lane, in 1654. By as early as 1739, there were 551 known coffeehouses in London. Café Procope, the oldest known coffee-house in Paris, established in 1686 while the famous Café de Flore did not open until 1890.

Enough of the history lesson, the ability to enjoy a coffee or something stronger is something we can now all enjoy. Paris seems to have almost taken it to an art form. Mentioning café culture and images of a cosy table for two, somewhere off the Champs-Élysées possibly in springtime, when horse-chestnut trees in full blossom are conjured up.

Vienna and Rome are also top spots for the culture of coffee but possibly every city of the world has suitable places for enjoying a caffeine fix. North America has led the way, developing big brand coffee shops and Australia has a similar modern take on the culture. Havana not only offers a great cultural experience but the Old Town is home to one of my favourite coffee houses; Café el Escorial, though that may have something to do with availability of mojitos.

Purveyors of coffee also offer some insight into the culture itself. Shisha pipes are popular additions in throughout North Africa, Morocco or Egypt and they are often male dominated establishments. I rarely saw any women in the coffee shops frequented in Egypt in particular, patrons were exclusively men sipping their strong coffee while playing cards or dominoes and solving the problems of the world. 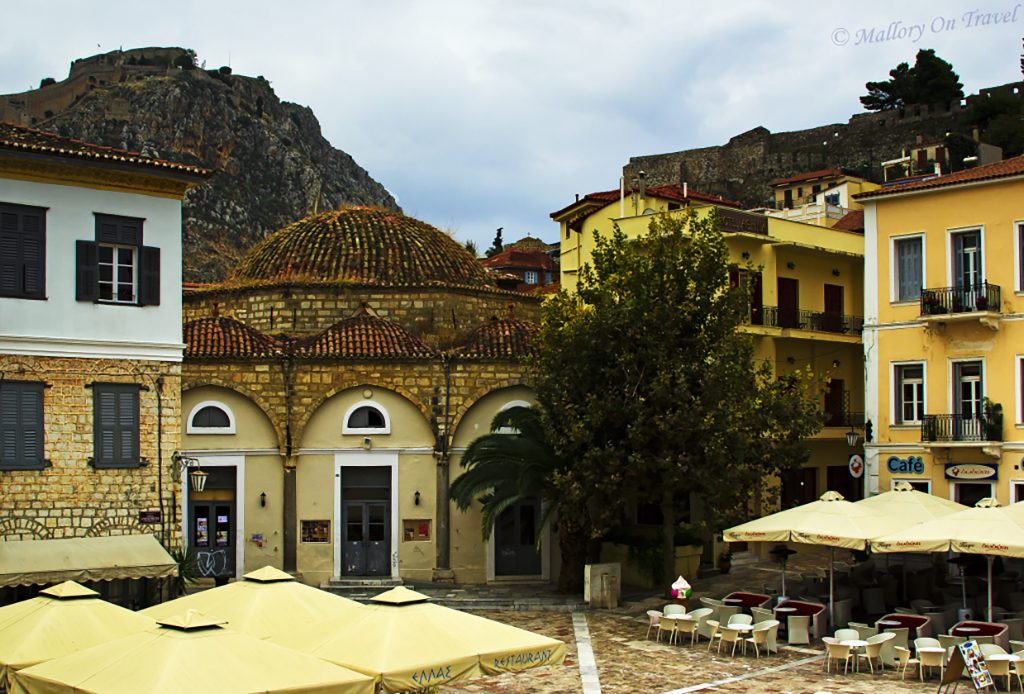 The great thing about café culture is that those that don’t even drink coffee can enjoy it. Tea, wine, cocktails or something to eat it is immaterial, it is usually the atmosphere that matters. It is not even dependent on friends, it is great to enjoy good company but sometimes just watching the world go by alone is equally pleasant. I have often started with a coffee in the afternoon and found myself still there late in the evening enjoying a glass of wine. 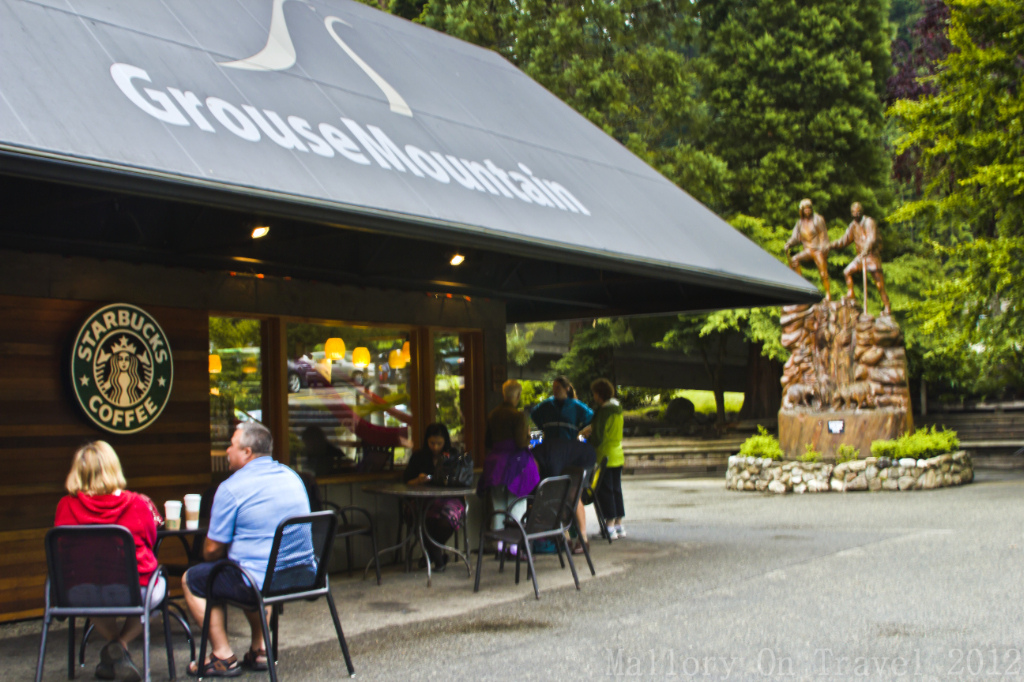 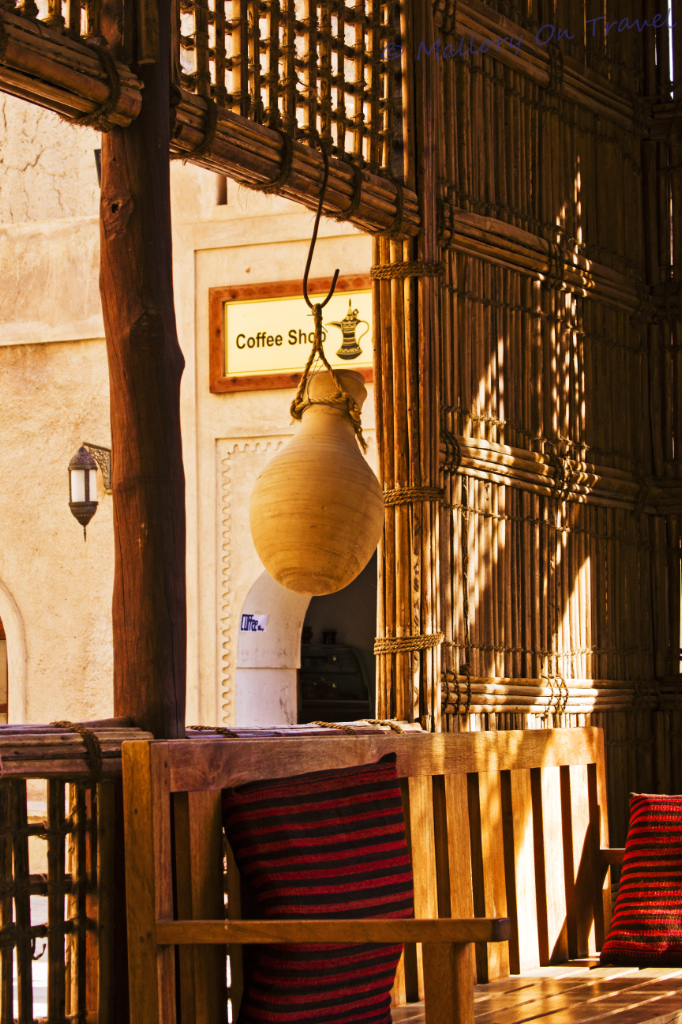 Coffee house in the fort at Nizwa, Oman

Parisians seem to have made the best of their surroundings and located their coffee shops well, marketing café culture more effectively than the rest of the world. However it is enjoyed anywhere and not just in coffee houses, one of my favourite places to people watch is the ‘Newquay Arms’ in the English town of the same name.

Café culture is universal, the social habit  that  is enjoyed by anyone, anywhere anytime. I feel it is relaxation in a cup.

“I have measured out my life with coffee spoons”  T.S. Eliot 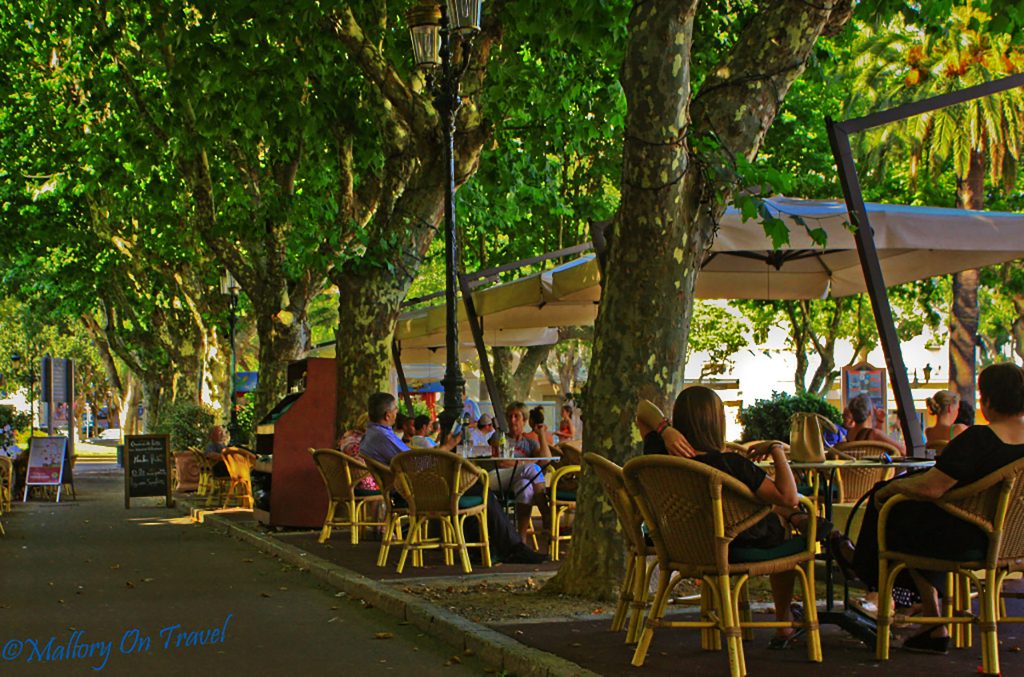