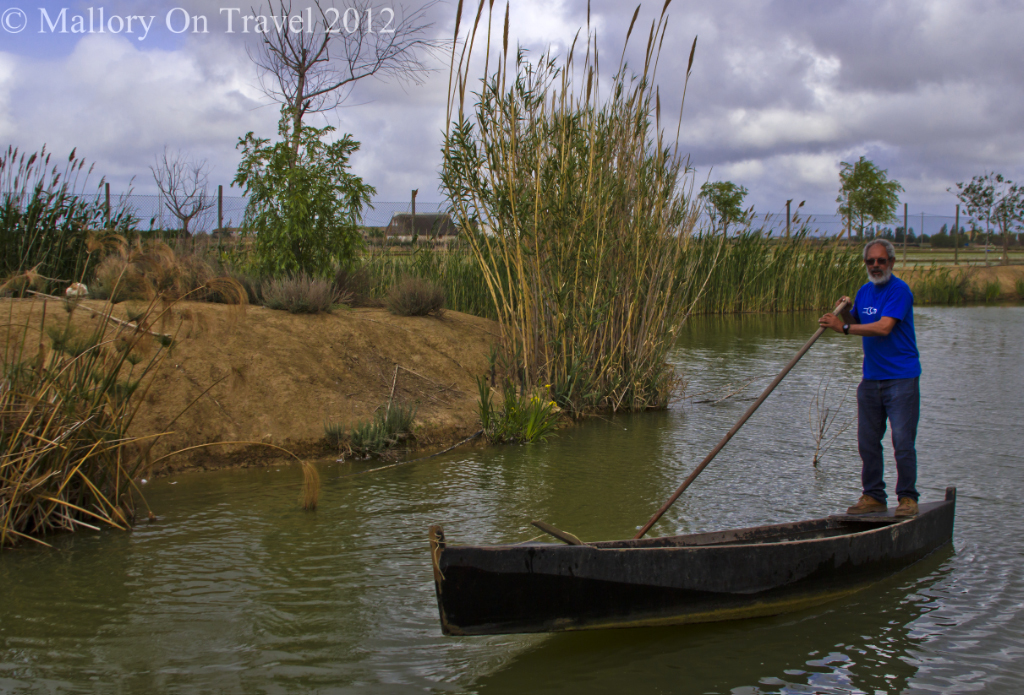 Meeting people is a travel highlight; those that live in a traditional manner unchanged for many generations using associated crafts and skills are particularly fascinating. I have the utmost respect for them, continuing to fight the irresistible tide of technological advancement and reliance. 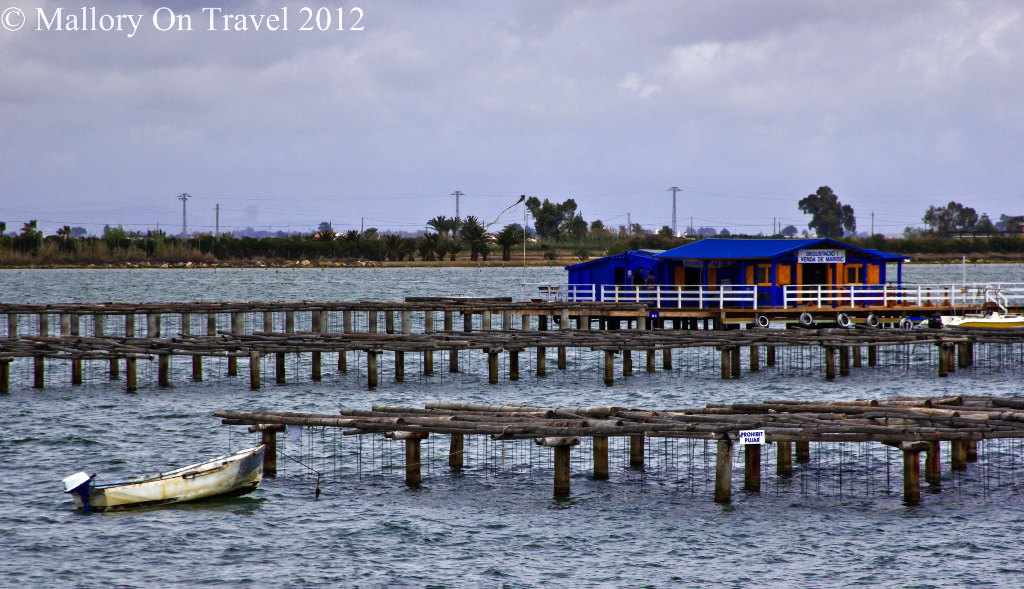 Arriving at our fresh mollusc delicatessan

“a prime example of a people that value their culture”

Retaining community ties and preventing the inevitable drain on the youth of the society that often leave to seek a modern lifestyle with an office job and the convenience of appliances and gadgets requires commitment and an effective long-term strategy.

The communities of the Delta de L’Ebre in Catalonia are a prime example of a people that value their culture and continue to work and live in a traditional manner. 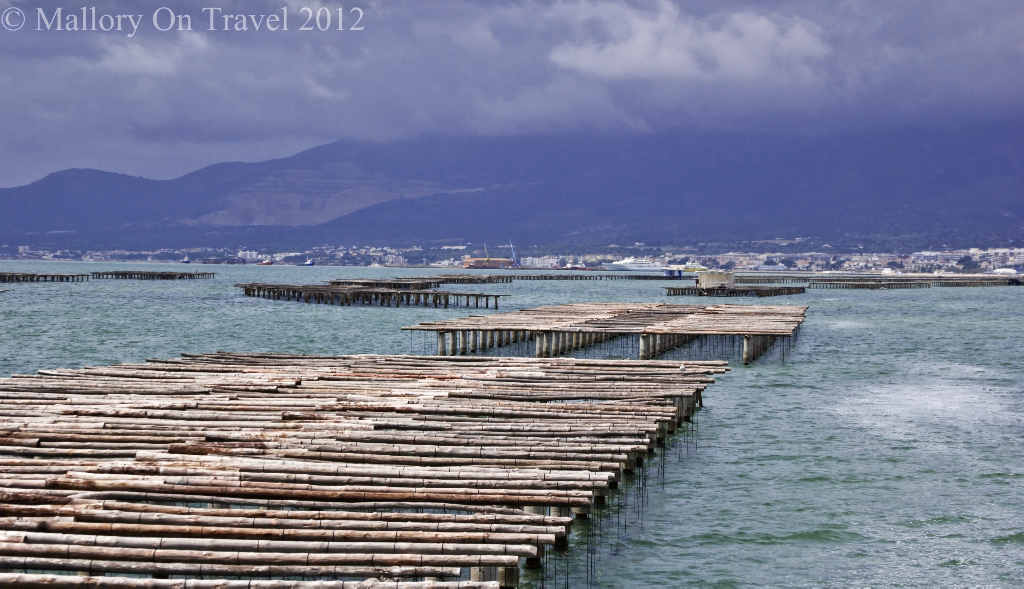 There’s a lot of shellfish under here

The River Ebro is Spain’s largest river, starting its long journey to the delta from way up in the Pyrenees it produces the second largest area of wetlands in the Western Mediterranean and one of the most important in Europe. 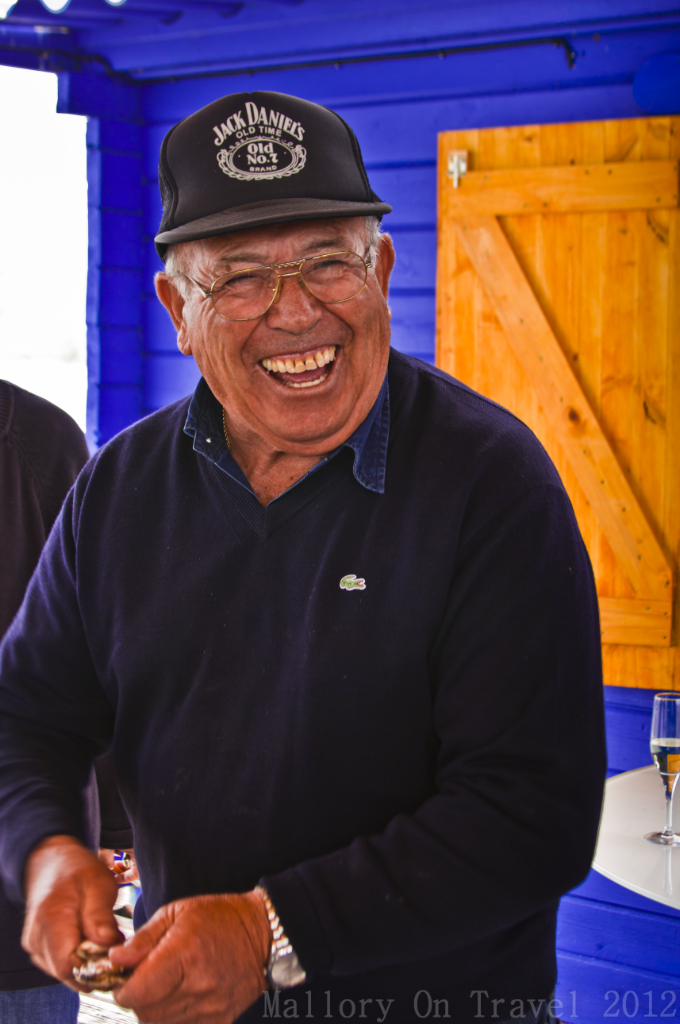 It is this mix of fresh Ebro and salty Mediterranean waters which is credited for producing the flavour of the excellent shellfish particularly oysters which are farmed here. Rather than beds they are hung in 4m of water below row after row of trellises which appear like long log built jetties lying offshore in Alfacs Bay.

Championing the production of this fruit of the sea is Agustí Bertomeu, President of the Union of Producers of Molluscs known affectionately as El Parrillo. A jovial looking elder statesman of the region, he appears to have made his livelihood from the ocean all his life, his skin is tanned with a leathery appearance from prolonged exposure to the sea air. 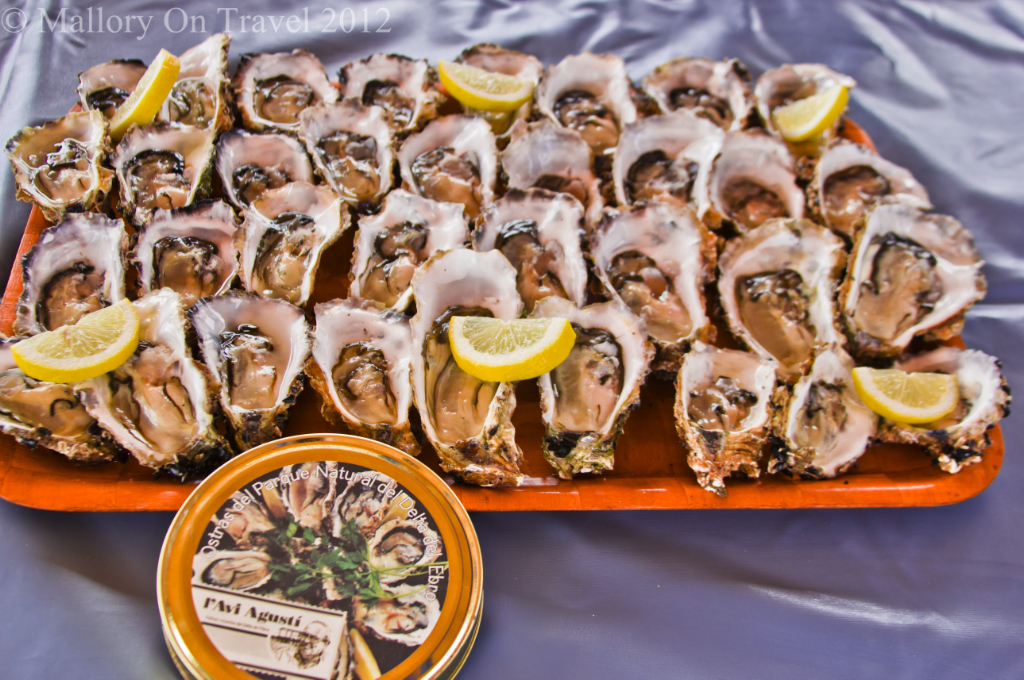 This is what we came for

Despite the services of a translator it often seemed that his mischievous sense of humour was being diluted in the retelling as he explained the importance of shellfish harvesting in the region.

“80% of the oysters farmed here are exported to France”

He is passionate about the delta and especially about the production of oysters. His pride in the quality of the shellfish produced is unmistakeable, regardless of translation. We were already busy gulping down the freshest molluscs imaginable while he informed us that nearly 80% of the oysters farmed here are exported to France, a momentary pause to absorb that snippet, then pop in another shellfish. 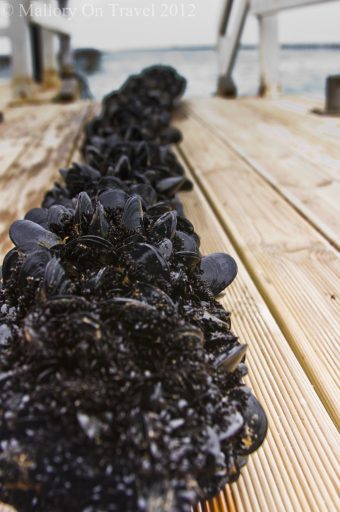 As I wolfed down my 5th or 6th oyster au natural El Parrillo expanded on the success story by explaining that often they were then repackaged and ‘exported’ back for sale to the restaurateurs of Catalonia. The irony was not lost on any of us, but most of us were too busy exporting them down our gullets, we must have appeared like large, flightless seagulls hungrily demolishing every scrap as if they were about to be whipped away at any moment.

There is an art to eating oysters properly, being able to savour the flavours but still retain some dignity. Loosening the flesh will allow it to slip easily from its shell and onto your tongue, for purity of flavours it is advisable to leave the lemon alone. I confess to having a few with as well, purely for research purposes you understand but at one point El Parrillo caught me dousing a prized mollusc in lemon juice, his face said it all but it did not prevent him gently admonishing me in Catalan.

“Our oyster surprise was washed down with cava”

Allowing an oyster of any kind to merely slip straight down is a mistake, but shellfish of this freshness and quality are seldom encountered and it would be a crime. It is important to relish them; allow them to dawdle awhile on the tongue to really soak up all the flavours both strong and subtle, I promise you will not regret it.

Our oyster surprise was washed down with cava and then followed by several heaps of mussels fresh out of the Mediterranean, steaming hot, the fragrance of the herbs temporarily overwhelming the salty air. I had lost count of the number of oysters consumed and within a few moments the same could be said of the delicious mussels. Breakfast is the most important meal of the day after all! 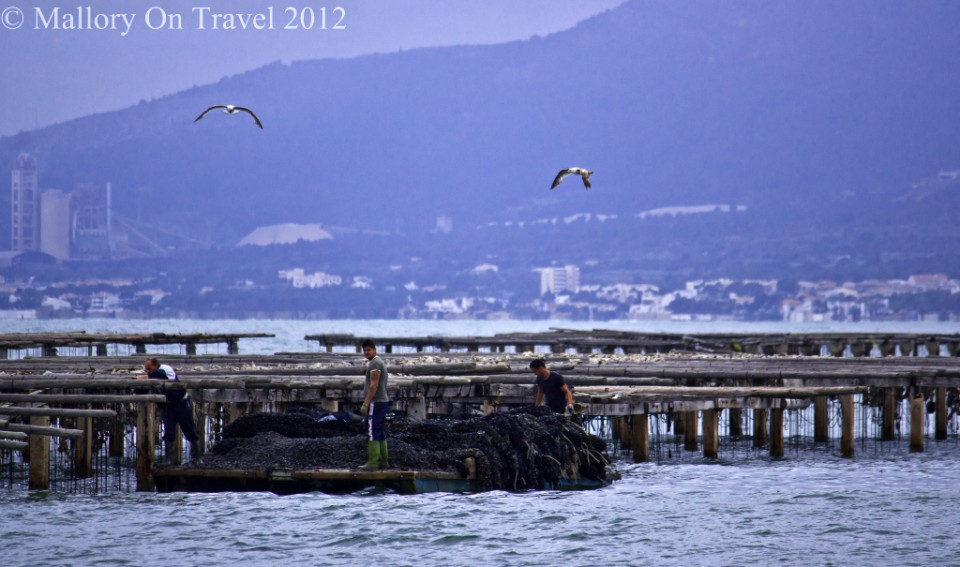 hallow water almost beneath our feet, the babies at the top were tiny, like beads on a necklace. Our host then demonstrated the correct method of opening an oyster. After a couple of demonstrations he allowed me to have a go and with his expert tuition I eventually managed to dispatch my own. Letting it go to waste would have been a crime so I immediately slipped the succulent flesh into my mouth, savouring the sublime fresh, saltiness that made my day complete. Yes, I do love oysters!

After bidding El Parrillo a fond farewell and thanking him for his hospitality it was back to shore. Boats and rafts were arriving at some of the nearby trellises, hauling up the thick cords of mussels and piling them on the decks of their marine vehicles. It is evident this industry ably supports a large proportion of nearby communities. 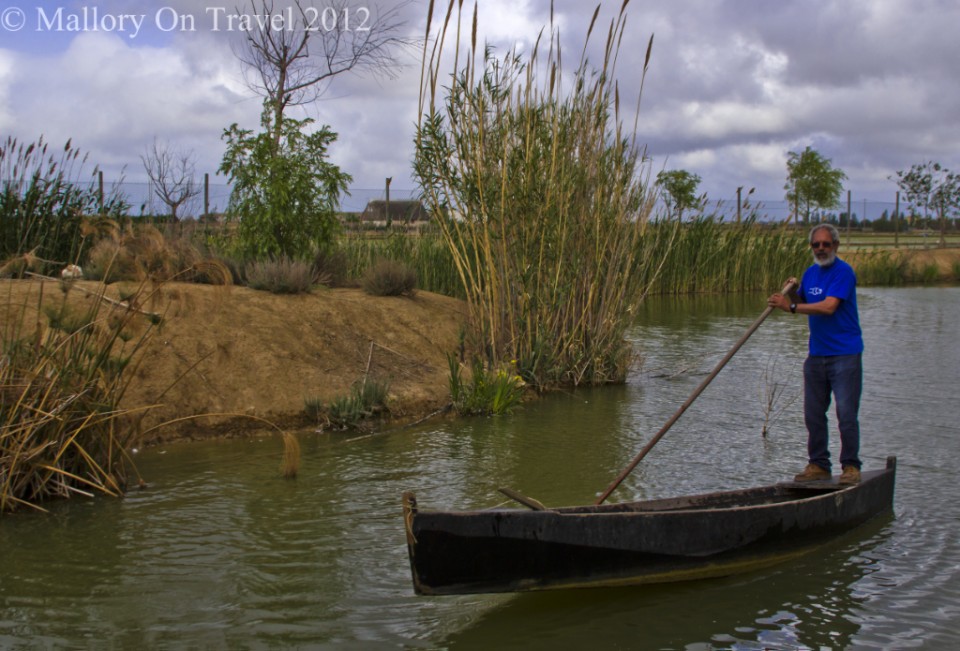 Traditional boating with a pole

The wetlands are also ideal for growing rice and miles of paddy fields stretch beyond the horizon. It is another traditional crop from the delta and is still picked by hand though now some assistance is provided by paying tourists.

This demonstrates the ingenuity of the people, not only are they managing to retain their cultural identity they are promoting it. It is possible to stay in cottages built from locally produced materials providing basic but comfortable accommodations. Guests then get to experience not only rice picking with its therapeutic mud between the toes quality but try fishing with various nets, organic cuisine and boating skills. Allow a long stay to fully master the punting technique with a pole though. You may even get to kiss an eel! 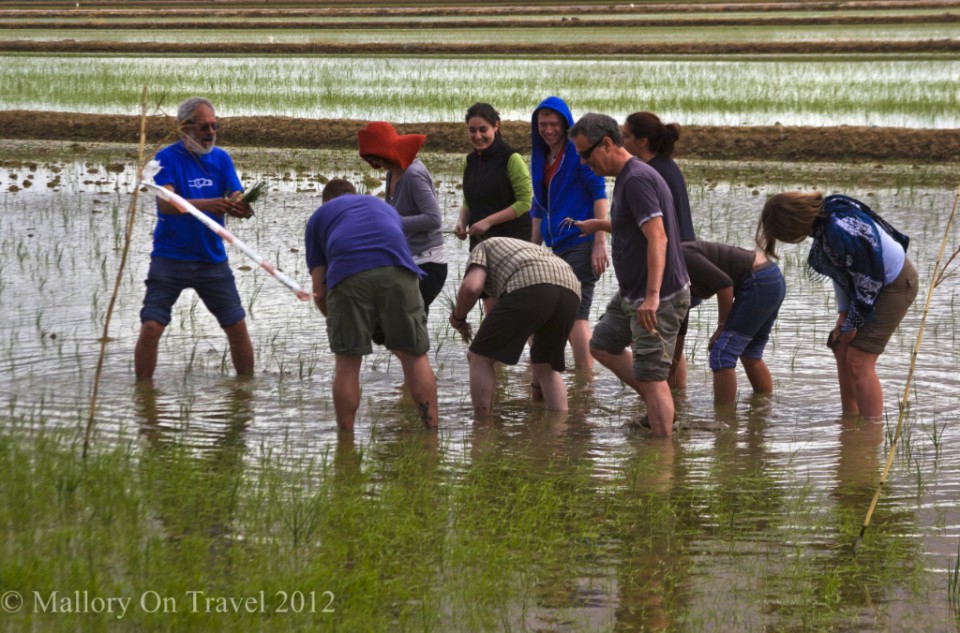 I have commented on the passion of the people of Catalonia on a previous visit, my return has not diminished this opinion, in fact it has reinforced it. They have a strong national identity and are proud of their heritage and culture, I learned a great deal from spending just a few hours with them absorbing the humility of their passion. 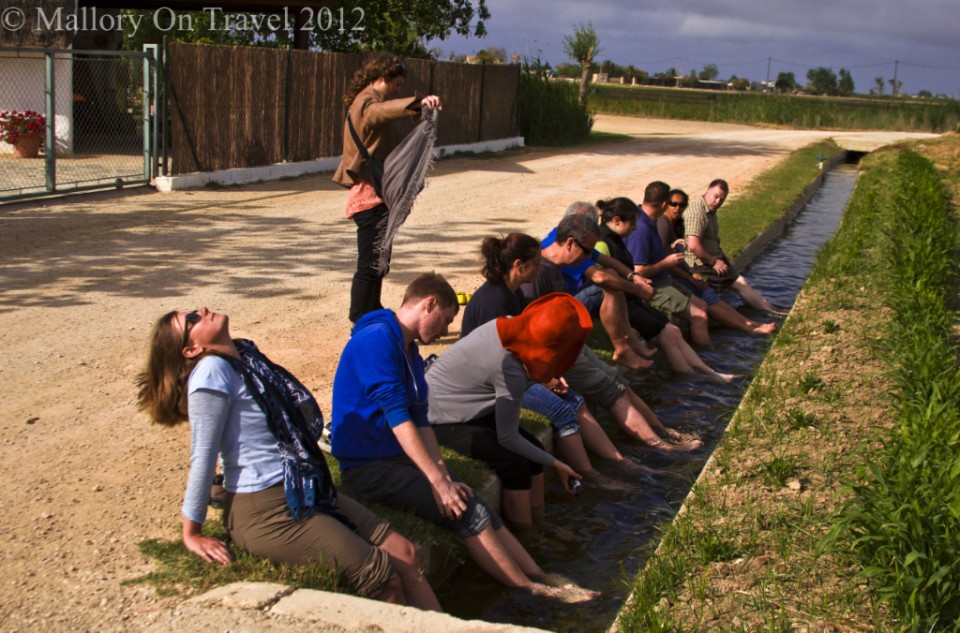