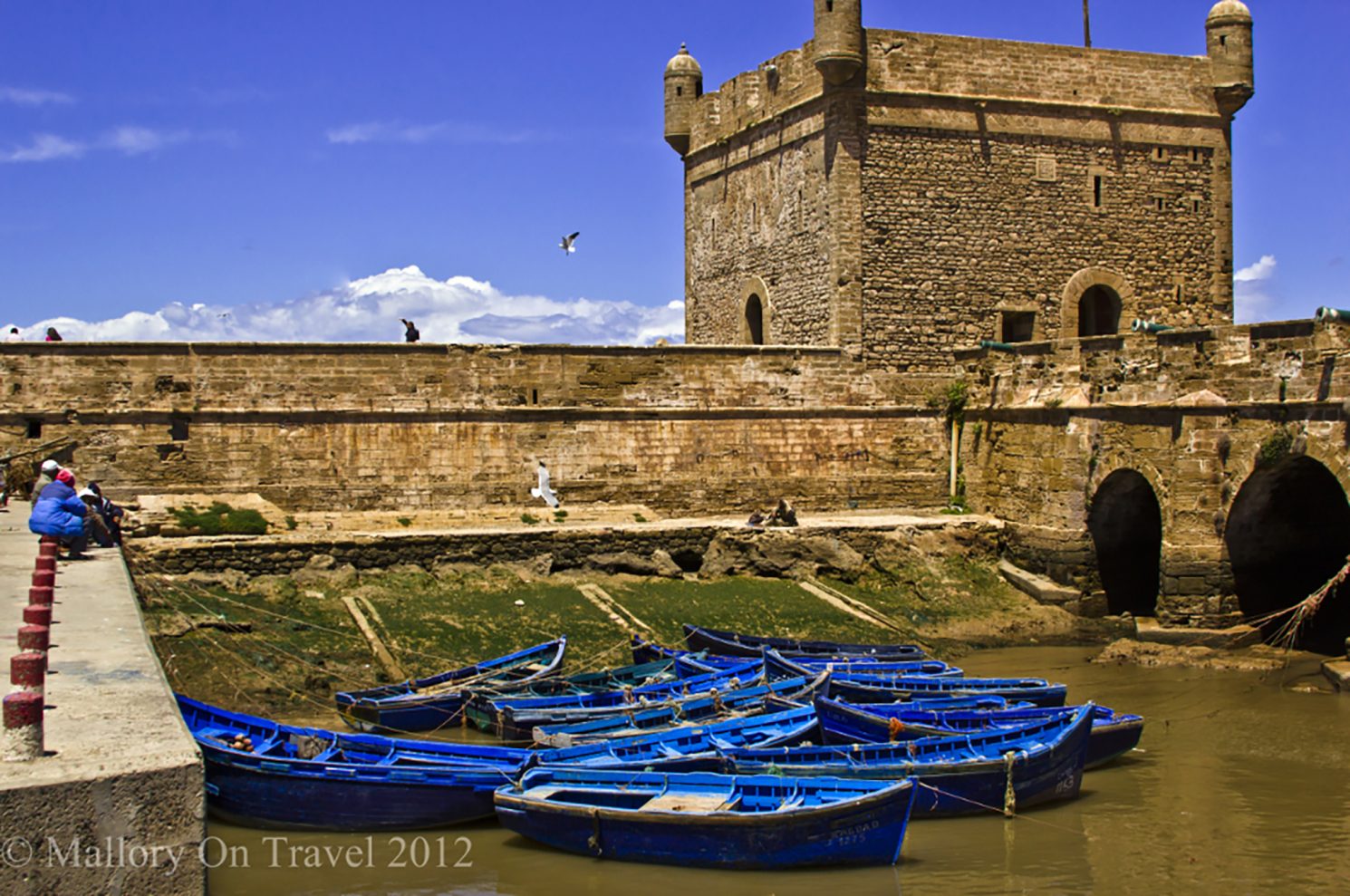 Essaouira on the Atlantic coast of Morocco, is known as the ‘Windy City’, and it’s not difficult to understand why. Even when there is little more than a breeze, it gusts through the streets, market places and along the beach. Its touch caresses the sand and reaches every hidden space within the town. 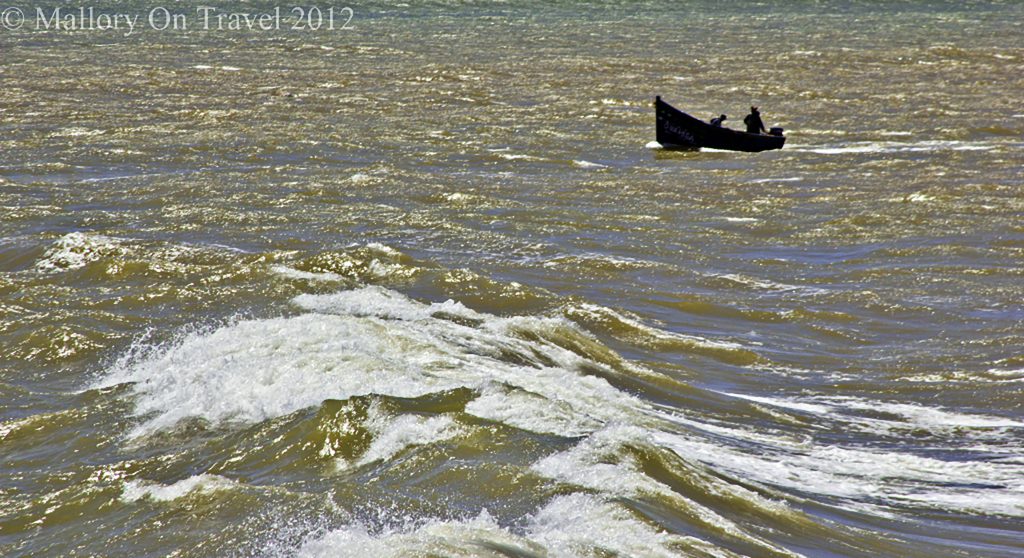 “shark and other fish, simply sold off the pavement in the fishing port”

That Essaouria s described as a city is a little more difficult to comprehend. Despite the many exclusive hotels, riads, bars and restaurants it’s still little more than an ‘overgrown’ fishing village. It is this feeling of authenticity absent from some other larger Moroccan cities which  appeals to me.

I enjoyed several hours in the harbour, watching the fishing boats arrive with their catch, to be unloaded onto the wharf. Some of the fish makes its way to the nearby market but plenty of it, is merely sold off the pavement in the port. 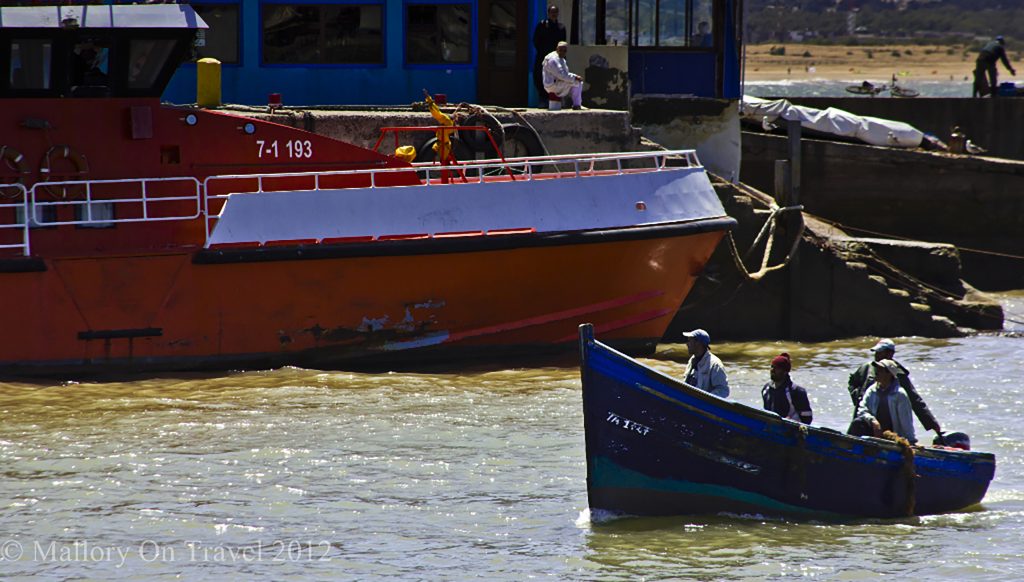 Last of the fleet

The small boats are for long-lining, all coloured blue they make a striking sight when docked together. They use fishing lines which are several kilometres in length and catch the bigger fish such as red tuna, rays, bass and sharks such as blues.

There are larger boats; trawlers which drag nets for catching the smaller fish such as sardines, mackerel and shrimp. Fishermen buy and sell their catch along the quay and in the fishmarket along with the live lobster and spider crabs caught in traps.

The fish selection on display in front of individual ‘fishmongers’ is quite startling and a little sad, especially the obviously juvenile blue sharks which are probably the prize catch for the fishermen. 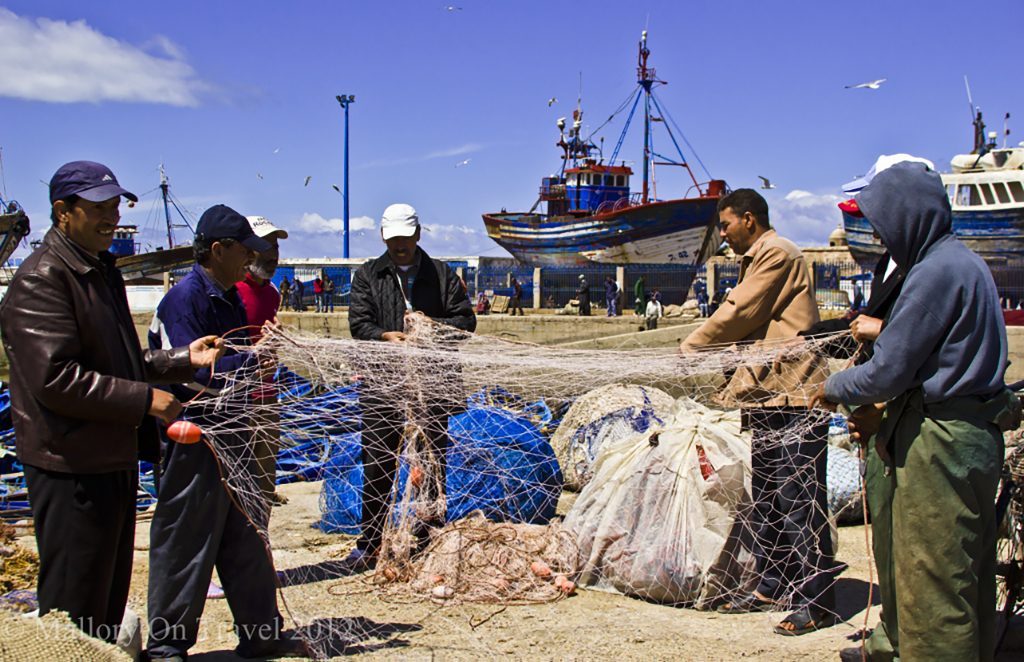 It is a little surprising that the Essaouira air is not filled with the stench of fish, in fact the market area is much more pungent. Fishermen tend their stalls gutting and filleting their catch whilst bartering the best price with the restaurateurs of the city. It seems likely that it pays to buy in bulk and there is some collaboration between restaurants or street food sellers, guaranteeing to buy the entire catch of certain fishermen. 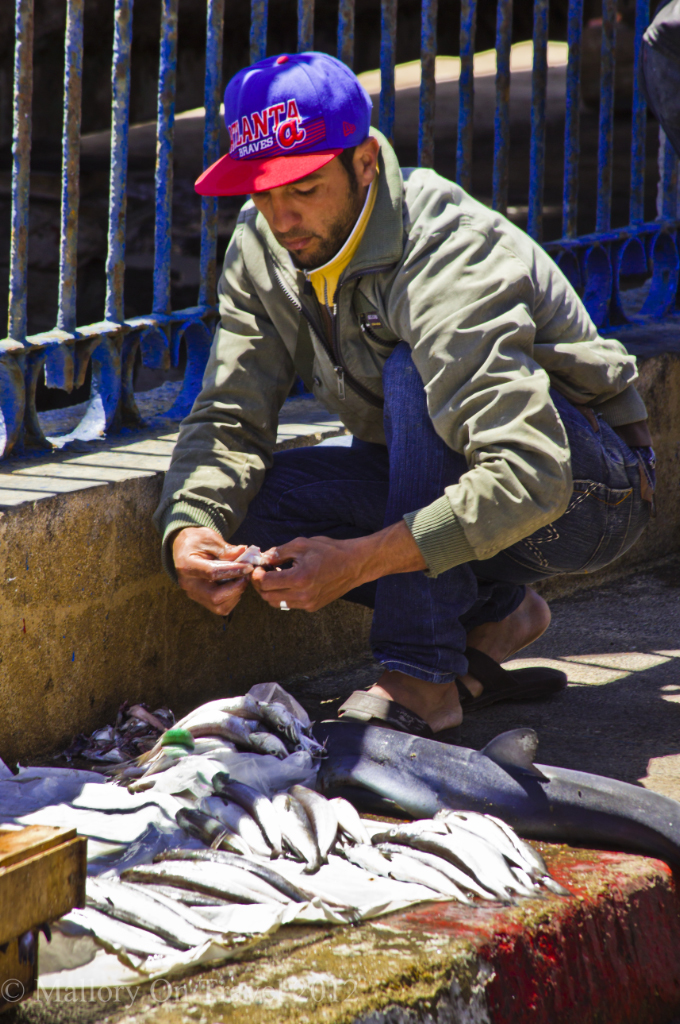 Once the days catch is sold, possibly enough being retained for dinner, preparations for the next fishing expedition take place. Rough hands weathered by the sun, wind and sea spray work on nets, often in teams , repairing any holes. Other fishermen work on the trawlers cleaning decks, and still more lay out long lines along the wharf ensuring hooks and fishing lines are ready for action. 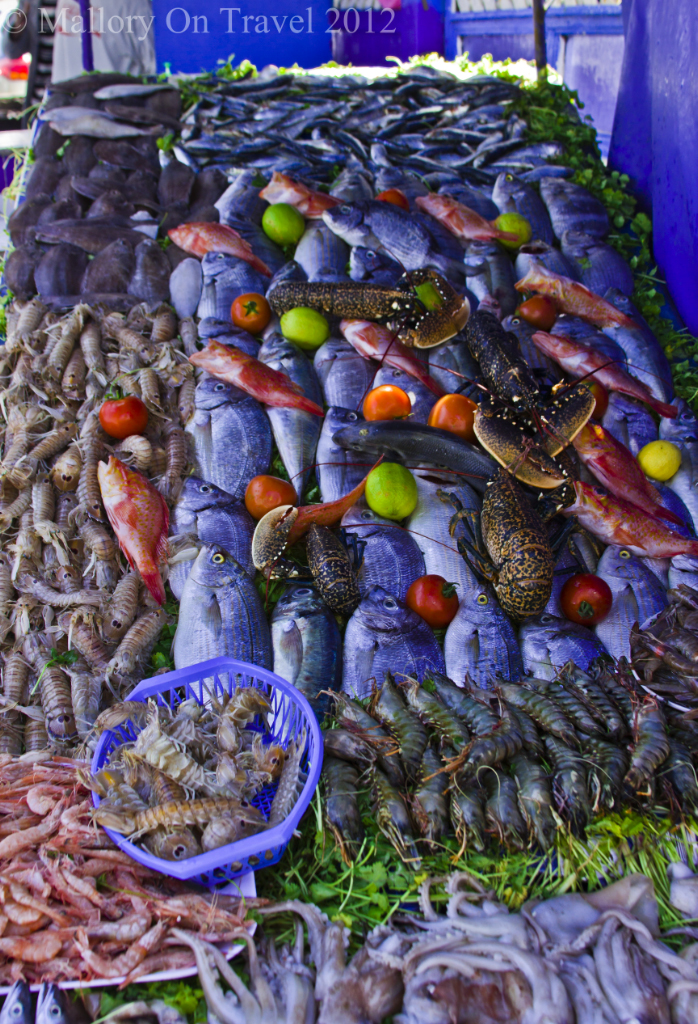 Tourists mingle with those working in the port and parents looking for something to feed their family that day. The docks throb with the comings and goings of those that make their living from the sea. Character filled faces etched from a life spent in the glare of the sun and the unforgiving power of the ocean lean against boats and discuss best practice.

Seagulls fill the sky with aerial warfare, avian fighter pilots performing ‘dogfights’ in search of the best scraps. Their piercing cries fill the air, high-pitched squawks, if they cannot wrestle anything from their adversaries then possibly scare tactics is another option.

Occasionally the odd over aggressive bird may ‘divebomb’ an unsuspecting two-legged adversary and avoiding their less sociable ‘shares’ is one of the hazards of the port.

Although the blue which is prevalent throughout the Essaouira medina is only visible on the long-lining boats it is still an attractive harbour. Protected from the elements by the fortified ramparts and a long breakwater. Built for practical and historical defence from the ocean and marauding pirates of foreign enemies they also add charisma to the port.

Strolling away from the wharf towards the city the nearby street food sellers are found, providing yet fish dish options. The displays are dazzling and the hawkers responsible for attracting customers will happily poke the crustaceans into displaying just how fresh they are, pincers raised in aggressive defence. 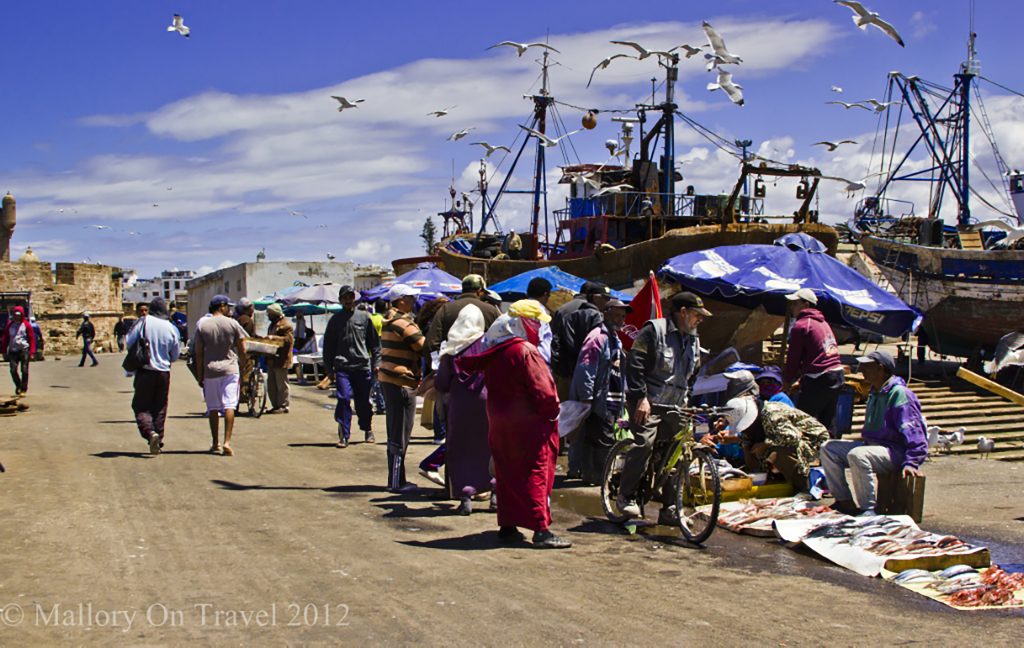 Market on the wharf

Feeling hungry, merely select a fish, it will be quickly prepared and cooked to order, how’s that for bespoke cuisine?

After enjoying a meal of the freshest fish possible, perhaps with some rice or salad and a local wine there is plenty of time to watch the everyday comings and goings of Essaouira. It is easy to imagine little has changed here, in truth little has, the fishermen still leave the port early each day, although now they use motorised engines and not the power of the ever-present wind. 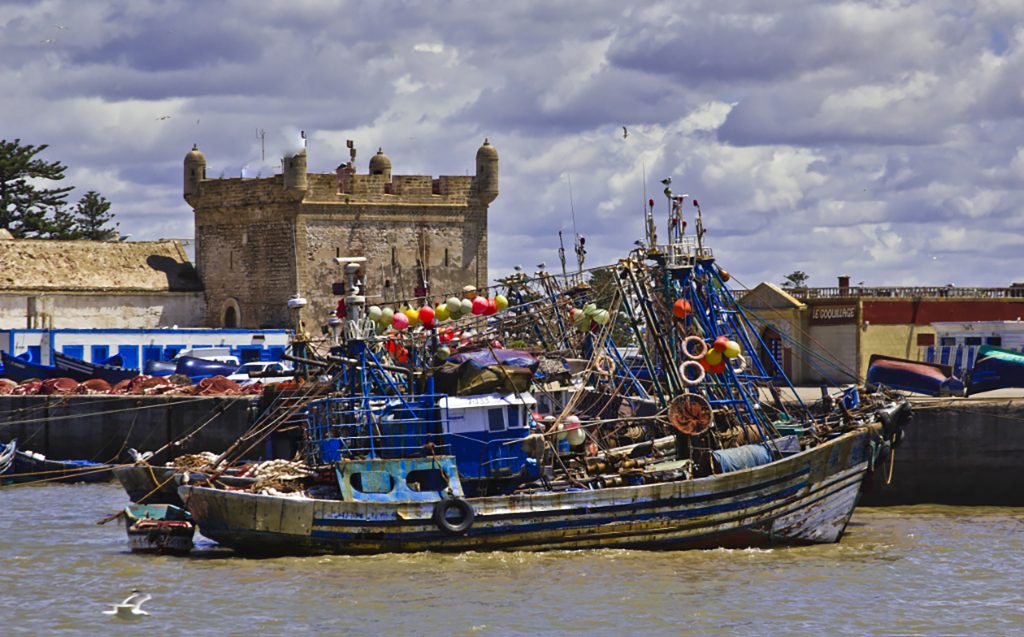 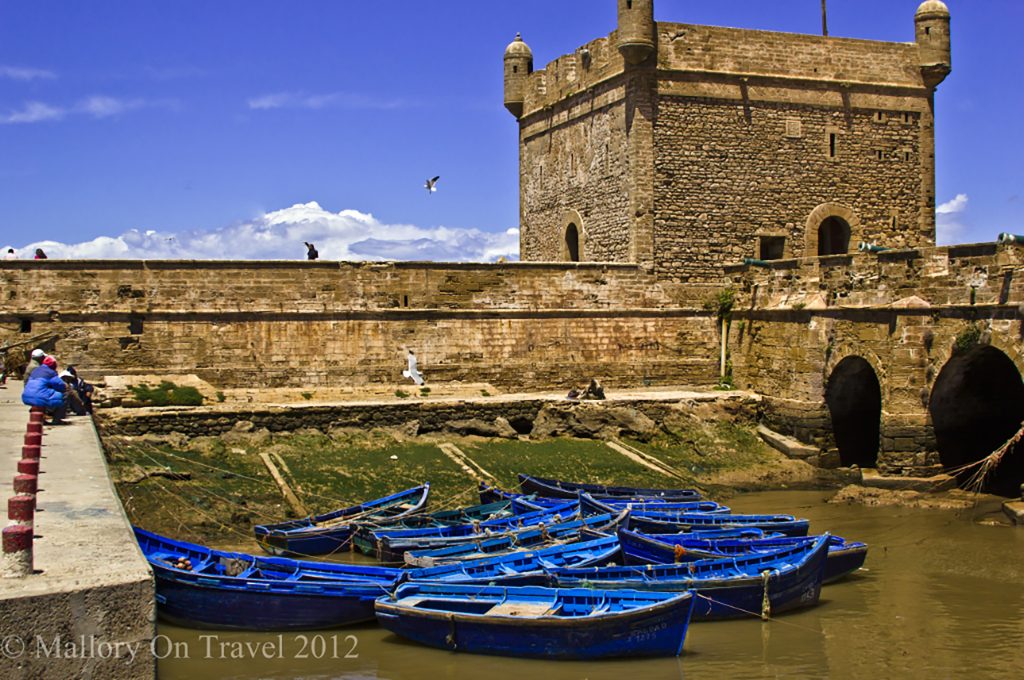 The reserve fleet of the Blue Harbour?

Fully satiated and yet only half the day has gone, it’s time to head into the narrow back streets of the medina but that’s a whole new adventure.