There are some projects that when first encountered appear extremely impressive, but when the details become apparent it is difficult to imagine anybody even conceiving it. The construction of the Hermione in the attractive coastal town of Rochefort is one such endeavour. 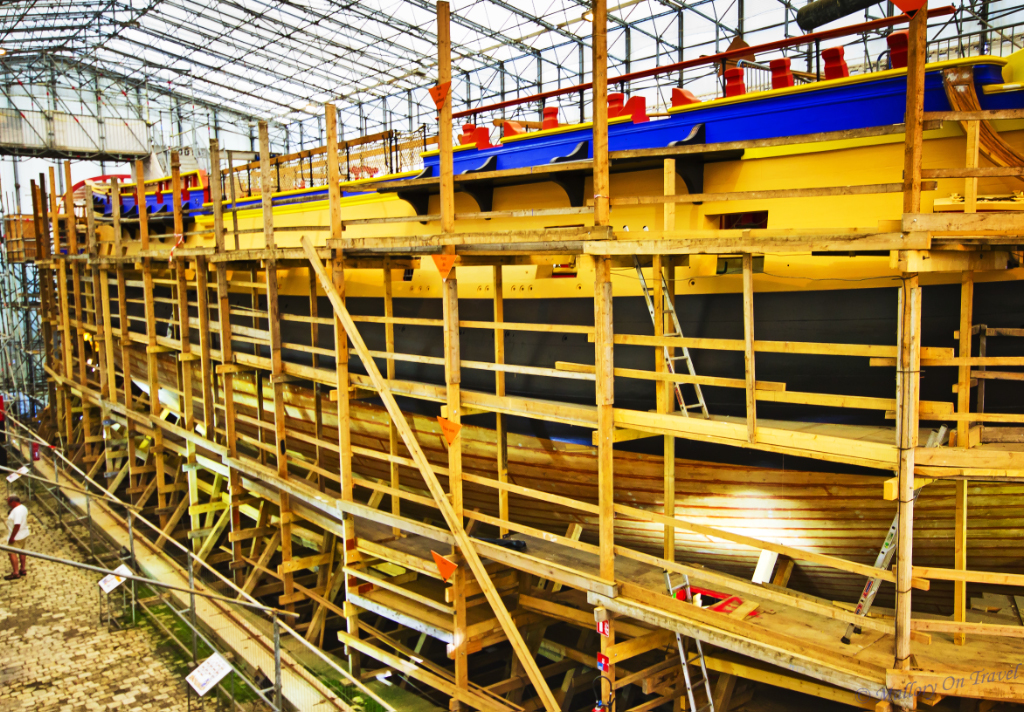 The original Hermione was constructed in just eleven months in 1779. One year later she famously transported the Marquis de La Fayette with reinforcements to America to aid in the War of Independence against the British. This was an important mission as La Fayette had been entrusted with a message from the King of France to George Washington.

A short but illustrious career was ended when she ran aground off Le Croisic in 1793 and was wrecked in heavy seas. 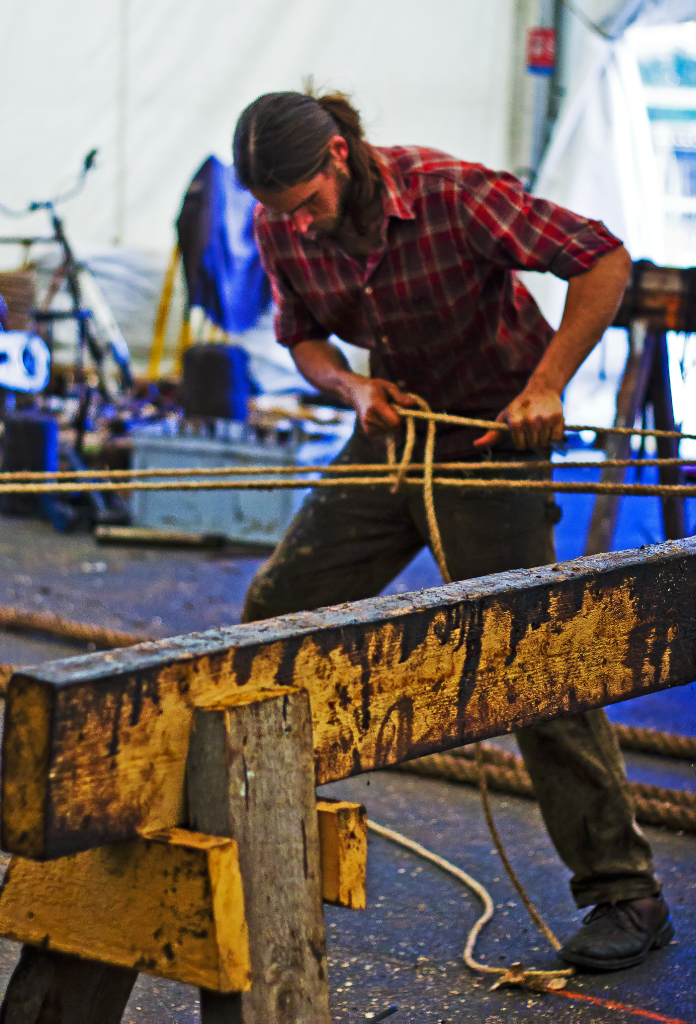 She was rediscovered 200 years later and the ambitious project to rebuild her conceived in 1997 by the Hermione-La Fayette association and was scheduled for completion in 2008. The choice of Rochefort as the location for this challenging project was a logical one; it was where the original was built on a bank of the River Charente.

The town has a long history of naval connections and was the site that Jean-Baptiste Colbert decided to build the French navy’s base and armoury when commissioned to do so by King Louis XIV. 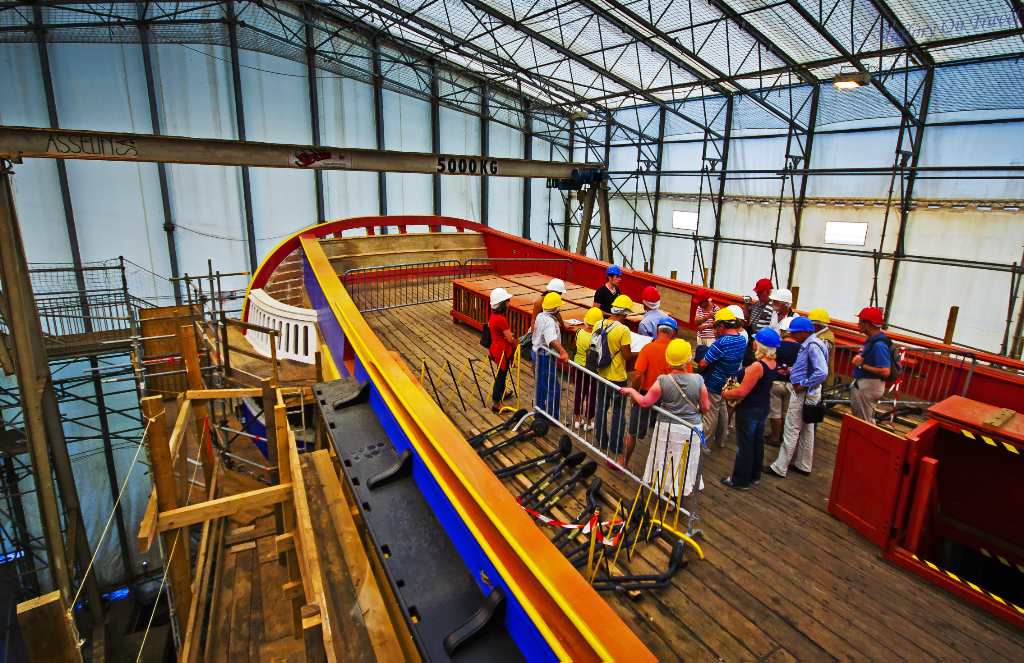 The obvious question is why the project is so long overdue when the original was built so quickly. The reasons are probably many and complex but it is likely that the sheer numbers involved are vastly different. Today the challenge is being carried out mainly by a small specialist company and a team of volunteers. The building of the original required employing a large manpower team of highly experienced craftsmen at times numbering 8000.

It is probable that health and safety issues that all major construction sites have to contend with in the modern era have played a part too. Shipbuilders in the late 18th century did not have H&S executives to deal with.

There has been a great deal of collaboration from a number of countries where similar projects have been completed. There are volunteers from as far afield as the United States and Sweden, their experience as ship builders varies but all seem totally committed to seeing the project through to fruition.

The original plans for L’Hermione are not available and the ‘old enemy’ the British Navy even provided her log-book and the plans of her sister ship La Concorde. These were essential to ensure the rebuild is as true to the original as possible. 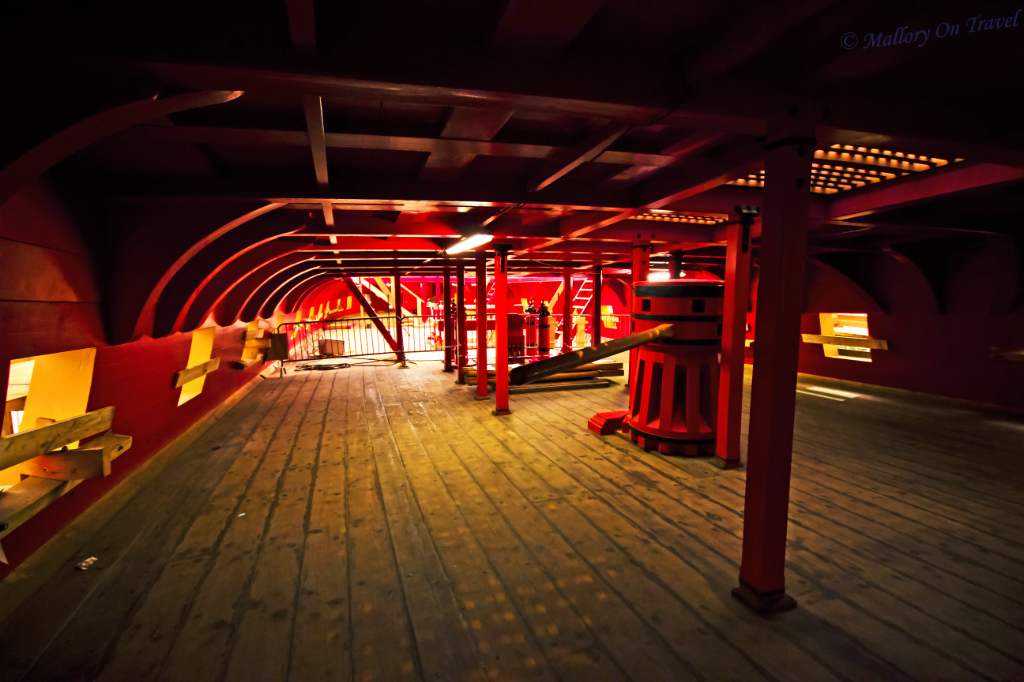 The scale of challenge is quite mind-blowing, the separate parts numbering almost four hundred thousand in total. The Hermione-La Fayette association decided the reconstruction should be entirely with original materials using traditional methods wherever feasible.

This is a time consuming process, witnessing two ladies stitching the 16,000 square feet of sails on hand machines indicated the enormity of the task being undertaken here. The material being used for the sails is ‘synthetic linen’ and is stitched with a nylon thread. 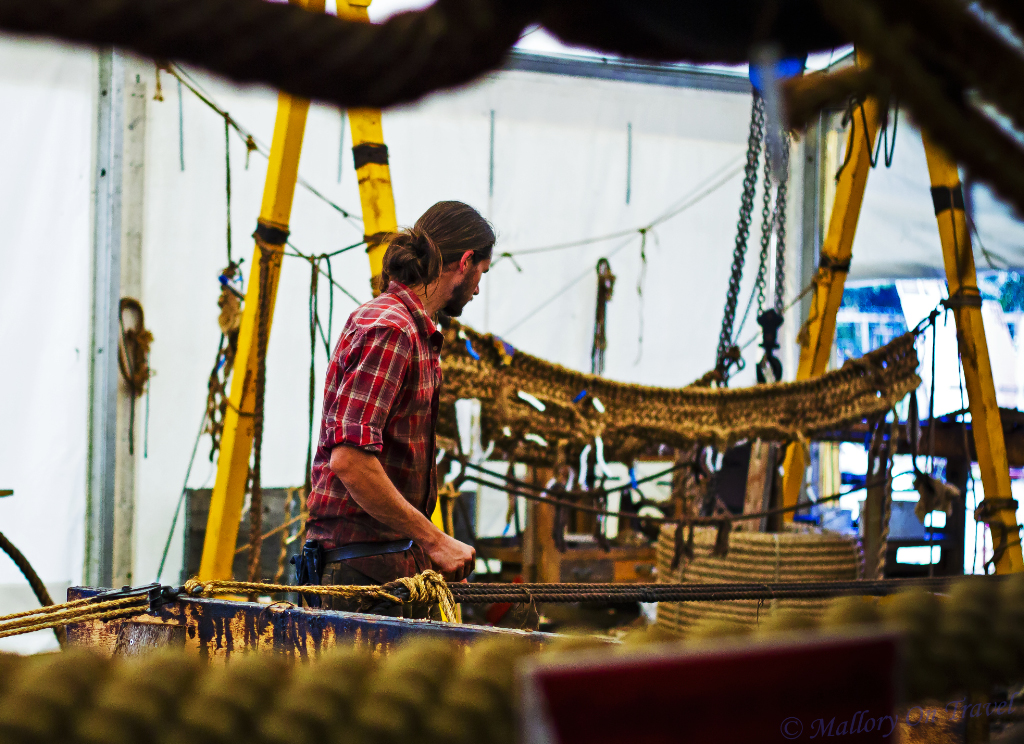 Trees are being felled from renewable sources but even so 2,000 oak trees have provided the timber for the vessel. It is a phenomenal project which must have had the organisers sometimes doubting themselves, but as it begins to take shape their satisfaction must be immense.

The near perfect replica also known as ‘La frégate de la liberté’ or ‘freedom frigate’ when finished will be 210 feet long with 3 masts. There will be some modern touches, the 34 cannon has been estimated as the actual number is uncertain and they will be of a lighter weight. An engine will be fitted for safety and a generator for the comfort of the modern crew which will be reduced in size. 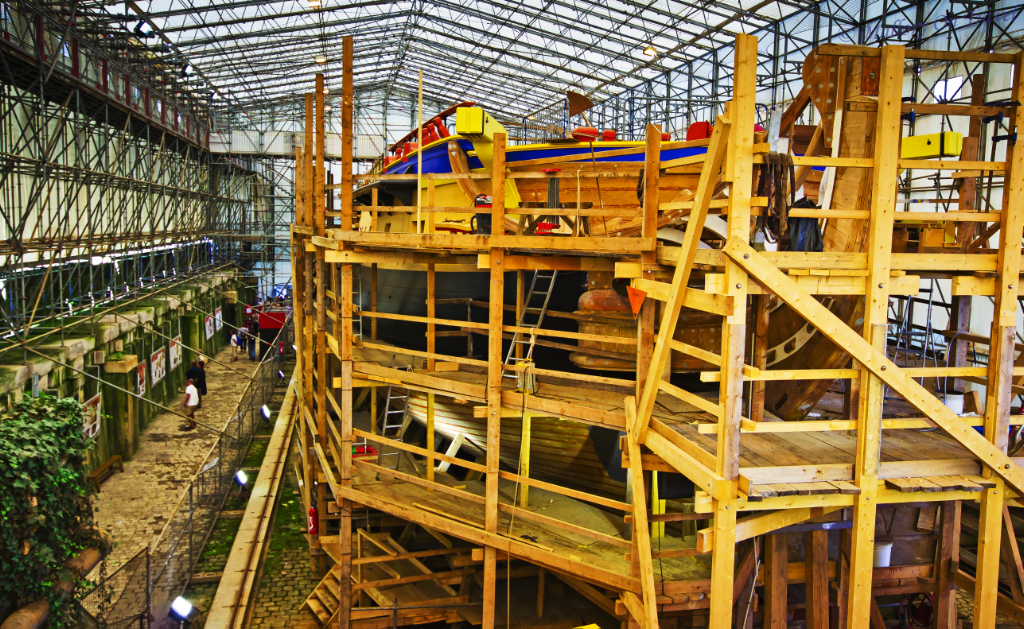 The delays may have been problematic for the organising association but has provided many more visitors with the opportunity to witness this amazing project in various stages of its development. I was fortunate enough to have a detailed tour around the site with Isabelle Georget, one of the knowledgeable ladies that have been with the project right from the early stages.

Witnessing the attention to detail which is being employed, the loving care that each ‘craftsman’ skilled or volunteer demonstrated left an indelible impression. Every painstaking task required to be completed in laborious fashion, yet all appeared enthusiastic and determined to ensure that the replica remained as true to the original as possible.

This is exemplified by the sculptor working on the figurehead. This is being carved in 2 pieces for ease of fixing to the ship; he explained the research required for its design and the process and time taken to complete each piece. He was very patient in his explanation and answering of any questions, he was obviously proud of the whole project but equally eager to get back to his work. 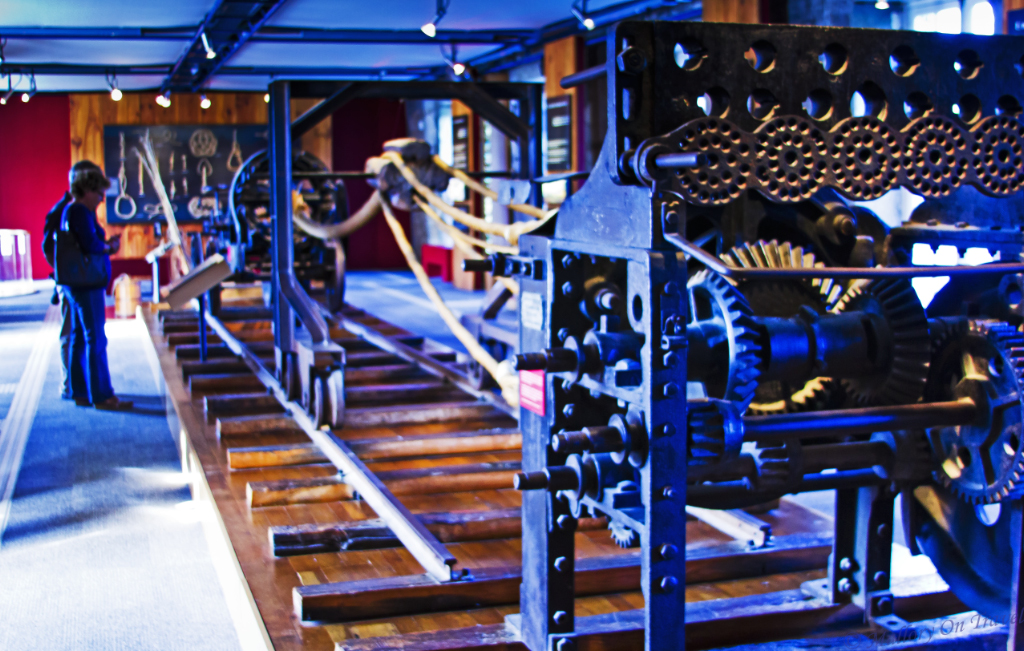 “even the smell of the timber or unaccustomed lacquers”

The goal is that the finished ship will live up to its illustrious predecessor’s reputation. The association has the stated aims of, authenticity, seaworthiness and sustainability building a vessel which is an exact reconstruction of the original, capable of sailing in deep oceans for the optimum period of time.

Visiting the shipyard of the Hermione next to the restored Corderie Royale Museum where the ropes used to be made is a great experience. It provides visitors with a glimpse into the traditional workings of a wooden shipbuilding yard, with skills and material rarely used anymore. The sights and sounds are probably unique and even the smell of the timber or unaccustomed lacquers all add to the experience. The milestones of the reconstruction are also being celebrated throughout each building phase.

Revised dates for completion of the vessel are sometime in 2013, flowed by sea trials. The final voyage which will retrace the route of the original to the United States is planned for sometime in 2014 or 15. 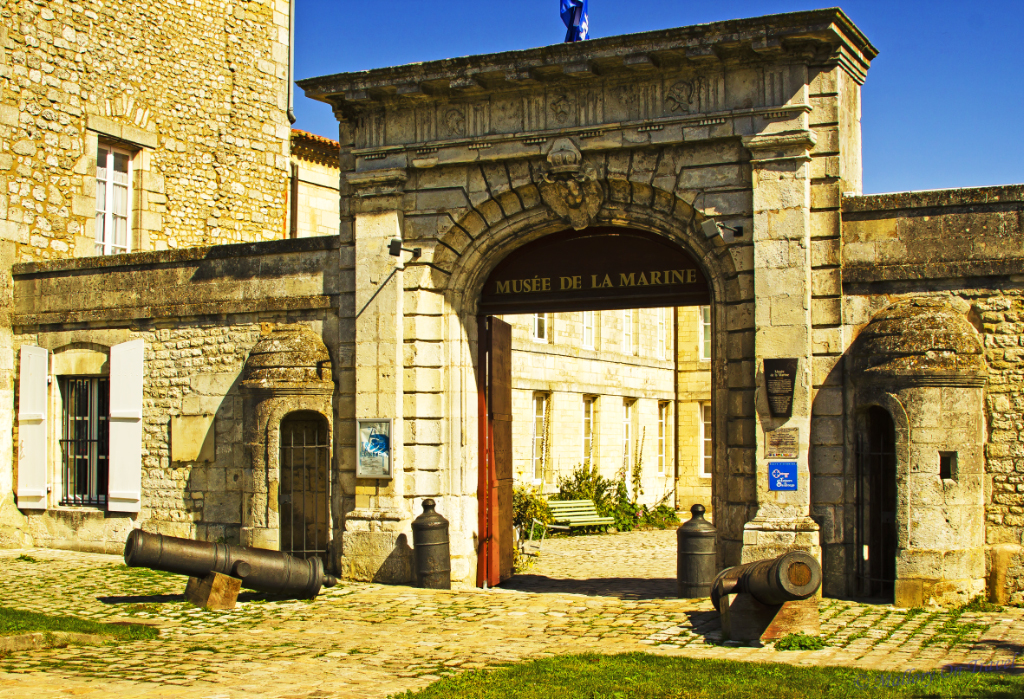 The ship is already beginning to take shape and it will be amazing to see it completed, set off on its sea trials and eventually sail into one of its stopping off ports in the United States. I really hope that it is possible for me to be around to see just one of those events.

L’Hermione really impressed me, it is an inspiring project and I am glad there are still people around that conceive ‘impossible’ endeavours.