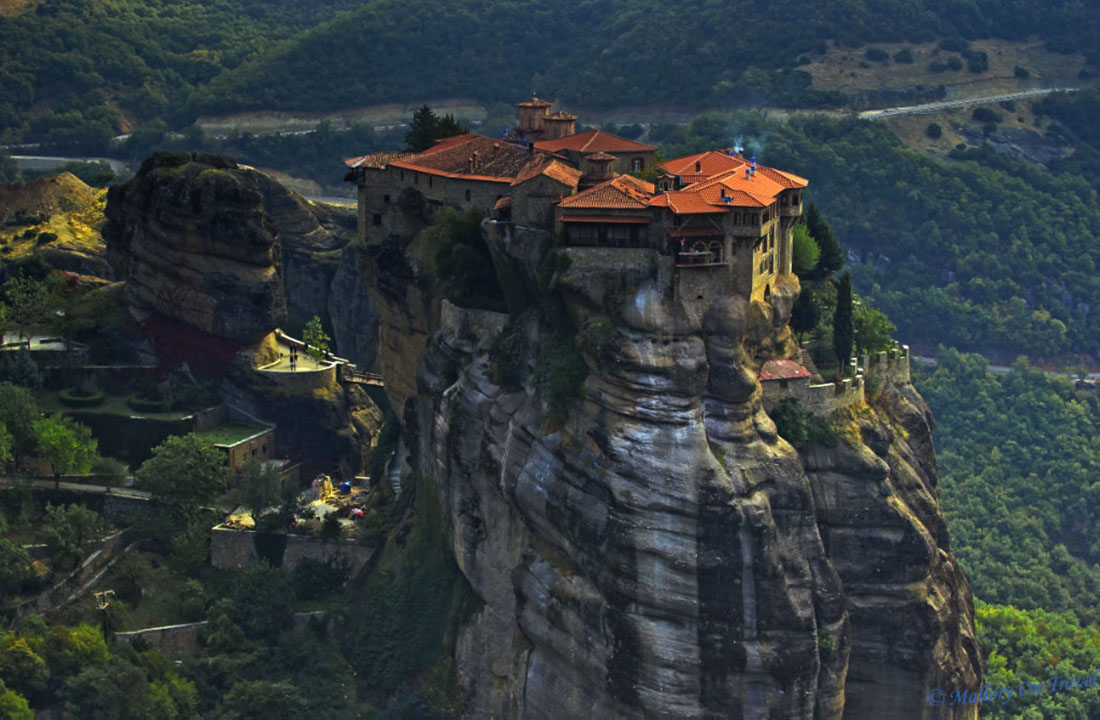 Meteora has held a special place in my imagination for as long as I can remember, having seen pictures of it in a now defunct travel magazine. It was whilst sitting in a dentist’s waiting room as a child, the article pictures blew my young mind, capturing my imagination, taking my thoughts off the current situation and leaving a burning desire to visit ever since. 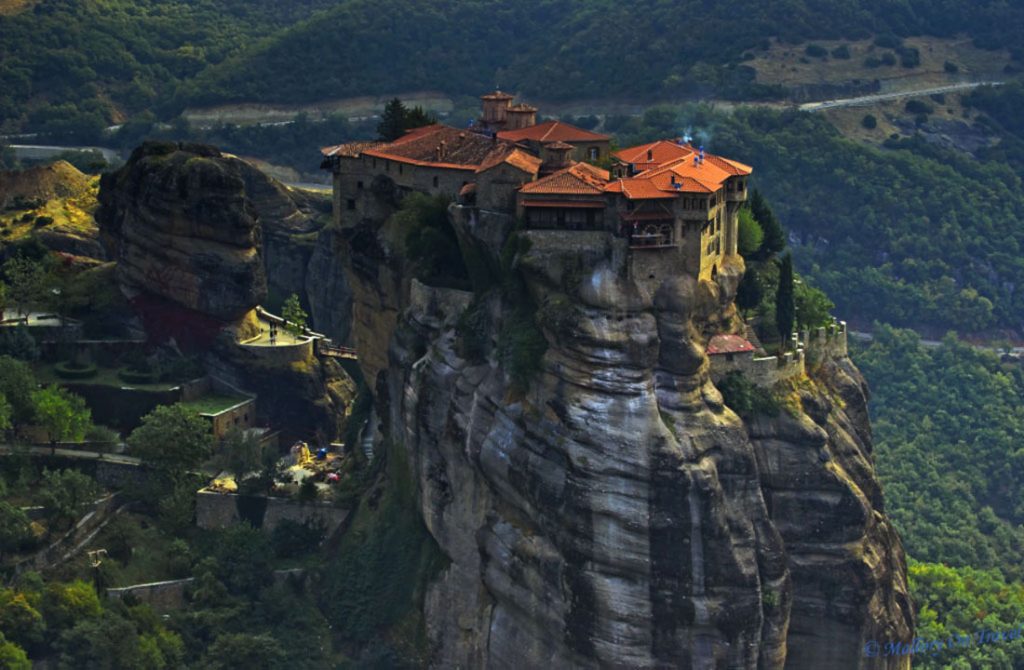 Sometimes the problem with anticipating visiting a destination for so long and with such desire, finally experiencing it can be an anti-climax.

Fortunately in this case there was nothing to fear Meteora was about to deliver in spades. The excitement of my initial view of the rock spires and monasteries has already been detailed in a couple of other posts. Suffice to say a basket of puppies can be more restrained than me at times.

It seemed appropriate to just stop the car for several minutes and soak up the scene, huge towers of stone rising like enormous rock spear points from floor of the Thessaly plain. Some of these pillars have impressive monasteries perched right at the top of them; these transform a remarkable scene into an incredible one. Seeming to defy gravity, almost ‘wedged’ into the very rock and epitomising the Greek meaning of Meteora “suspended in the air.” 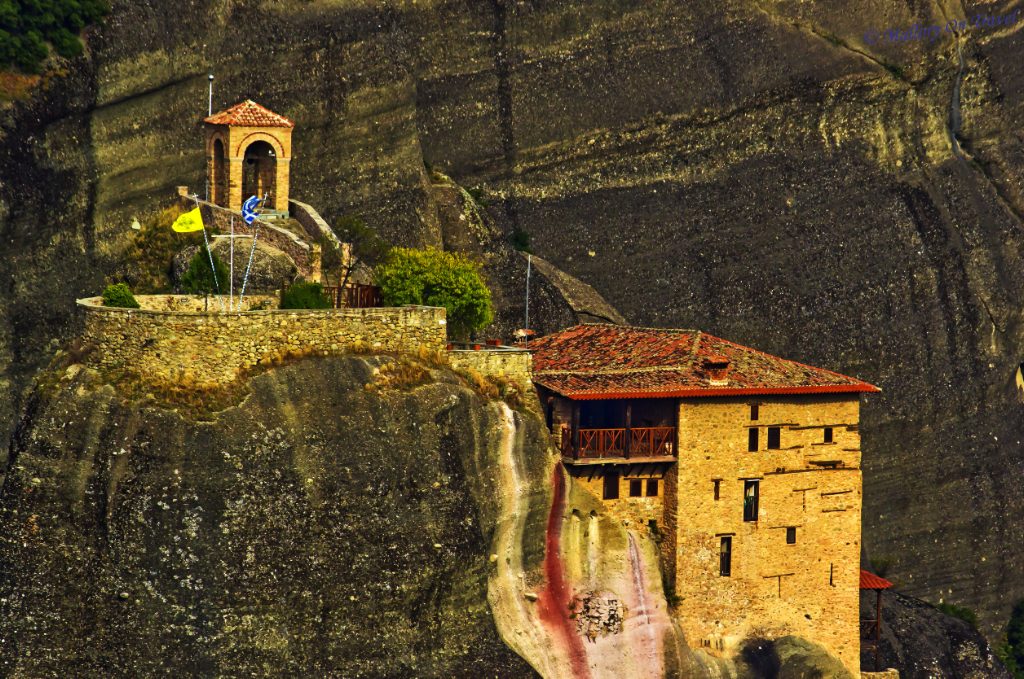 The unscheduled stop was probably longer than it should have been; taking plenty of pictures I eventually dragged myself into the car and set off for my rendezvous point. Driving across the plain which used to be an ancient seabed towards the village of Kalampaka dwarfed beneath the rock monoliths it’s almost certain I was wearing a huge silly grin.

The theory is that the original sea was pushed up by earthquakes and then eventually drained possibly through fissures created by the same movements. Weathering and further earth tremors then eventually left the current sentinels of the Plain of Thessaly standing tall. 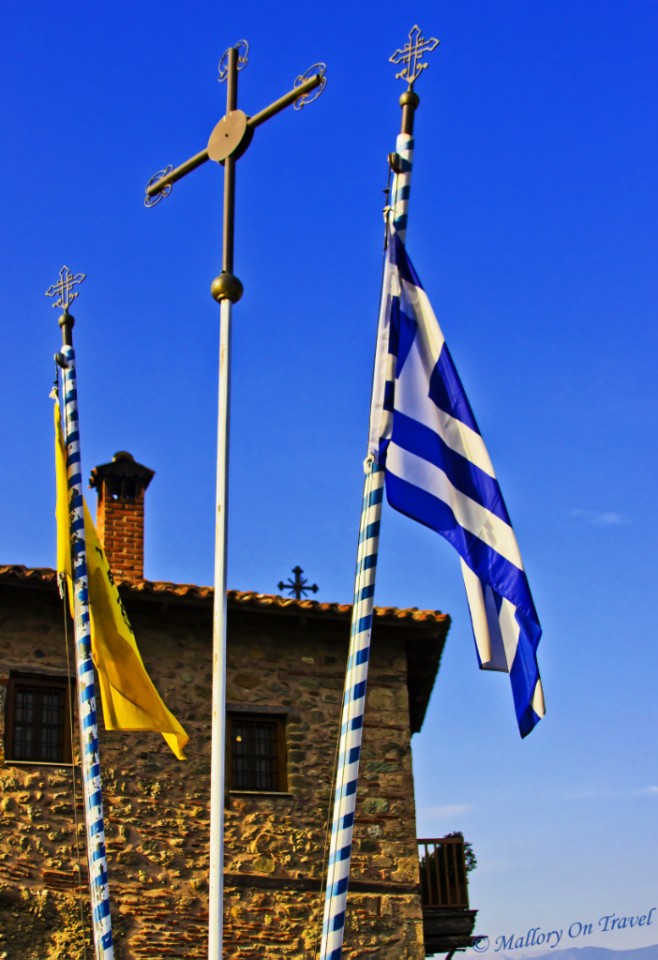 Kalampaka is sometimes described as a city but is little more than a village, with a selection of shops, some hotels and restaurants. It is pleasant enough, but in the context of the ‘floating’ monasteries, the construction of which seems almost impossible even today, it is a little anonymous.

“a monument of Humanity that has to be maintained.” 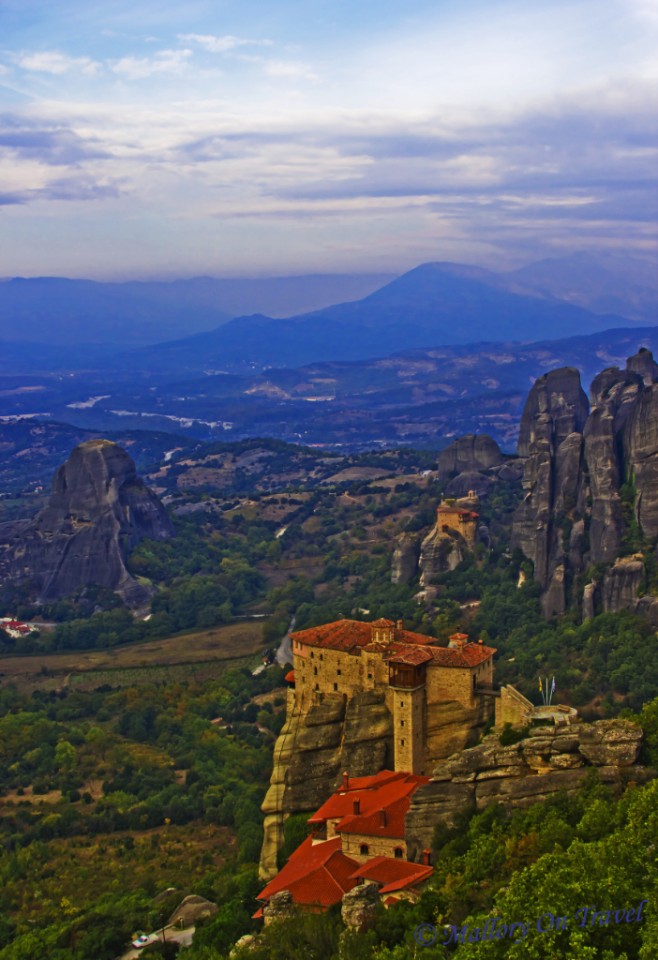 Monasteries high above the plain

Getting out and exploring seldom seemed a more attractive prospect and to find myself climbing up one of the smaller rock pillars within an hour of arriving saw the return of the grin! Despite not having climbed in a quite awhile the friction of the rock is superb. My guide Lazarus was experienced enough to have selected a testing ascent but not one that was so difficult as to leave me a quivering wreck. Even so I found myself hanging onto the tiny finger holds and having to trust minuscule indentations to hold my weight. An even wider smile emerged at the top though whether it was relief or due to the views is not totally clear.

Meteora is a UNESCO heritage site, described as “a monument of Humanity that has to be maintained.” This is an extremely photogenic destination; the landscape of this region adorns the pages of an abundance of travel literature. Every direction provides another jaw-dropping vista; my only regret was that there was not a mist in the valley. Images of the rock towers climbing out of the clouds are some of the most evocative I have ever seen, time to pray for some low cloud tomorrow.

Standing on just one of the rock pillars is an experience, they are extremely steep and being close to the edge where the rock just falls away is not for the faint-hearted. The ground is a long way below, most are over four hundred metres high and those suffering from vertigo may want to stand well back! 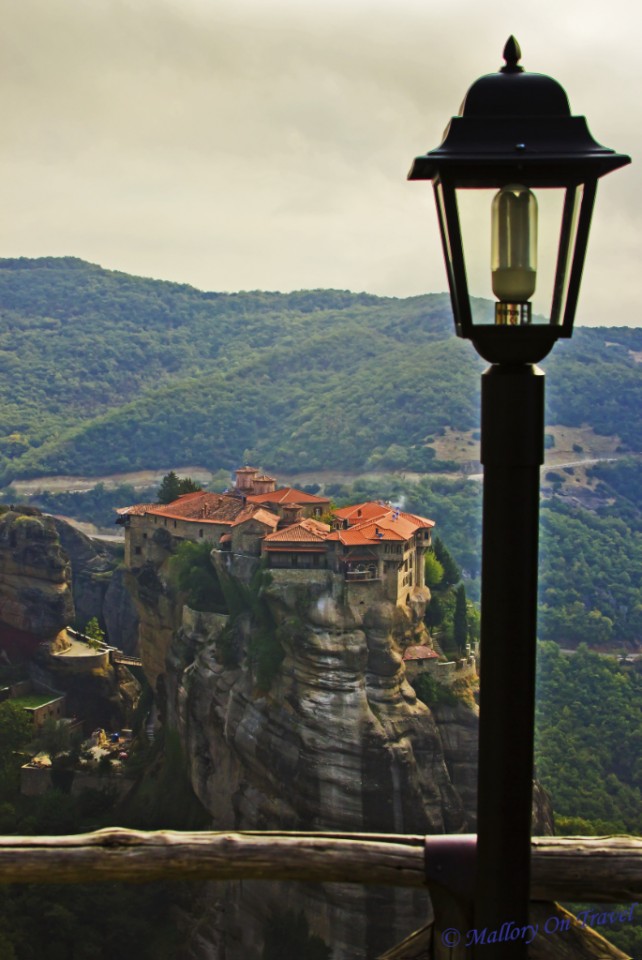 The view from Great Meteora

There have been monk hermits living here since the ninth century, living in caves. The monasteries were built for protection from bandits and there are twenty four monasteries in total, although apparently only six now have active religious communities. Two of these are nunneries and none of them have more than ten inhabitants, now they are mainly tourist attractions.

“Today called for a blanket of fluffy cloud”

In common with many visitors my trip was only fleeting spending just one night in the region. This barely provides enough time to have a look around the main monasteries and there is not any spare time to explore the surrounding region. It would be great to base here for several days not only taking a look at the less accessible monastic buildings but also to take a drive to other nearby sites of interest. 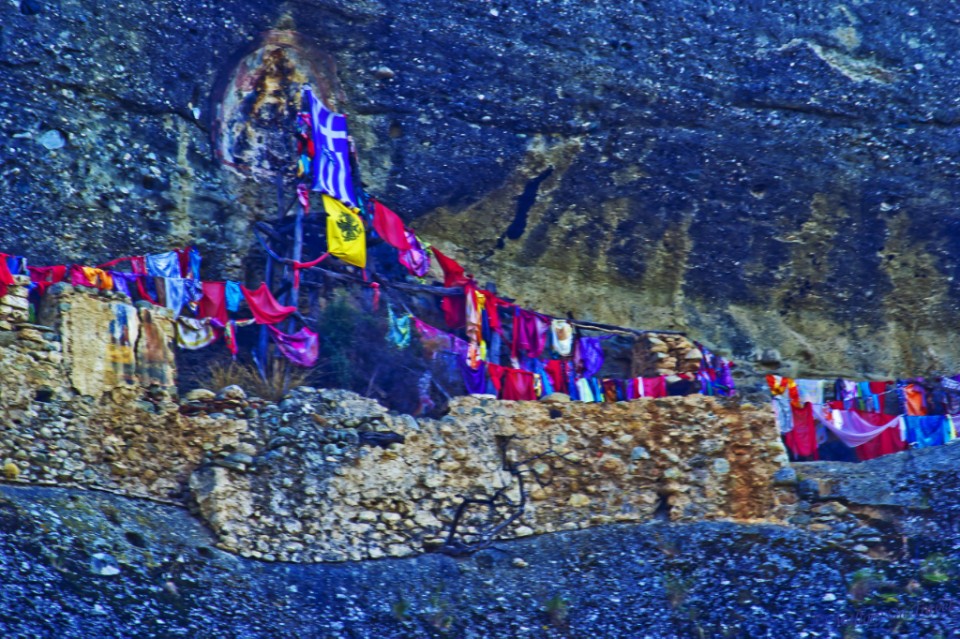 Banners and pendants high on a rock face

It was a little disappointing that the next day turned out to be a little overcast with plenty of sunshine, not a statement that is uttered too often, at least by the sane. This day however called for a blanket of fluffy cloud to swirl around the base of each of the pillars, alas my imagination would have to suffice. The USB cable would not fit in my ear so apologies I was unable to upload those images.

I had the benefit of two impromptu local guides that had offered to show me around, finding the best viewpoints for photographs and the most interesting monasteries to visit. Access requires climbing up stone flights of steps cut directly into the rock and puts off a few visitors, but it is well worth the effort. 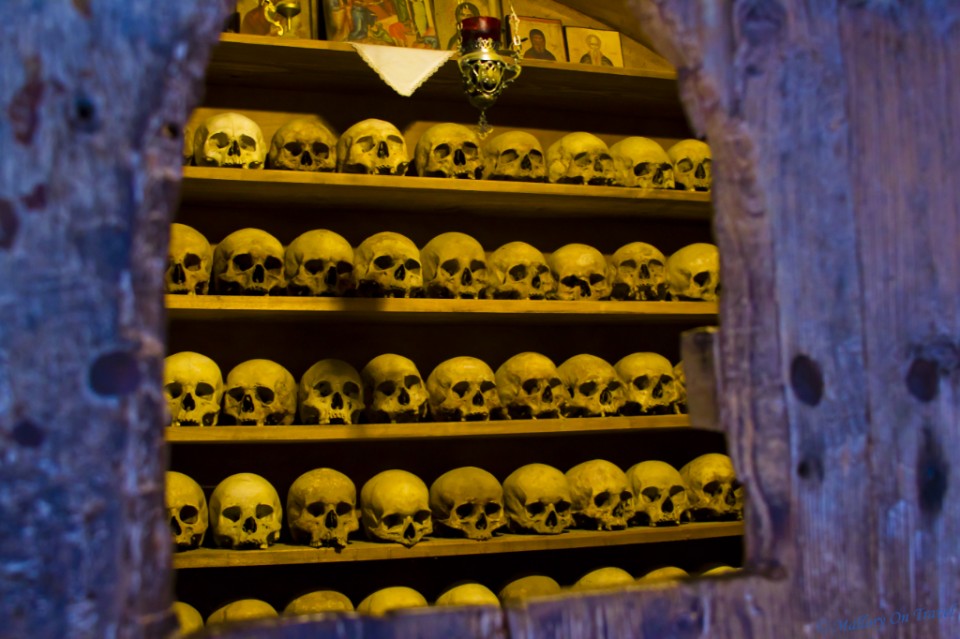 The room of skulls

Rossanou is a small convent which at times was hard to navigate due to a coach load of Japanese tourists visiting at the sometime. It is only small and photography is prohibited inside, which is common in the most of the areas for worship here. There is an extremely modest entrance fee and this along with sales of hand crafted items and books provide an income for the monks and nuns.

“there is a hidden ‘path’ which leads to the pendants”

Great Meteoron is the oldest, largest, probably the best known and most visited of the monasteries. It has a small museum on the grounds and it is possible to buy souvenirs too. There are quite a few little nooks and crannies to explore, looking down on the plain and some of the other monasteries the views are outstanding. Numerous feral cats wander through the grounds mixing with the tourists. A fantastic mural which covers a complete wall and a grisly room which houses the skulls of past monks add contrasting points of interest. To be honest the only thing missing …… yes you guessed it a coffee shop! Showing my philistine side yet again, at least it was not a request for a bar.

There was an intriguing string of banners hanging half way up a pillar face which turned out to be placed there annually by villagers as part of celebrations for St Nikolas. Apparently there is a hidden ‘path’ which leads to the pendants which are refreshed each year.

Before long it was time to leave, not only the monasteries but the region, thankfully these memories will remain with me. 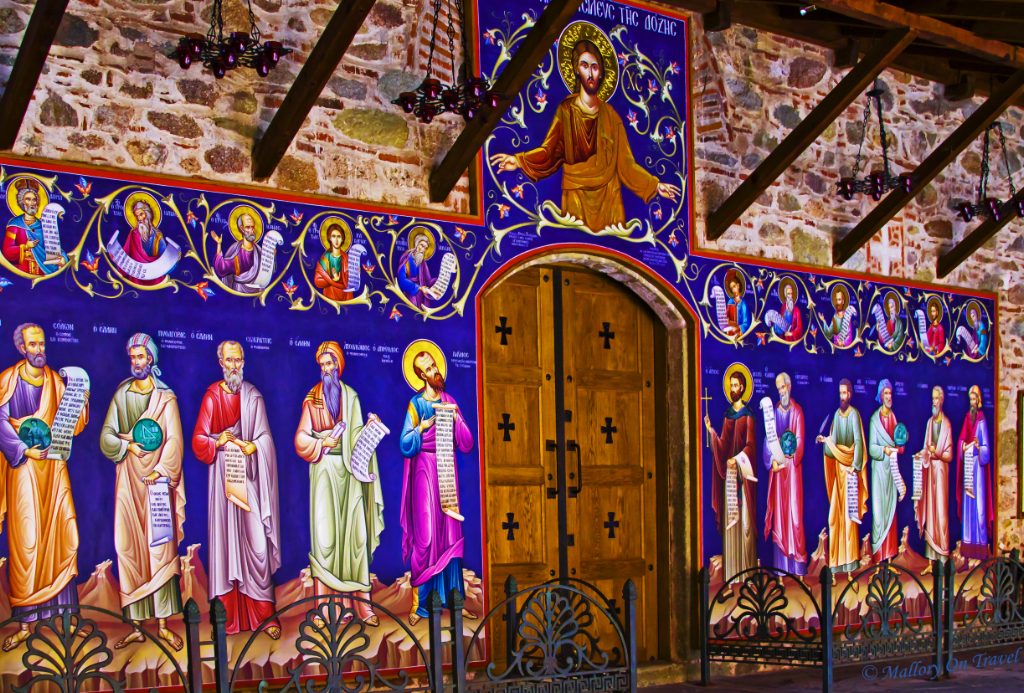 This is a truly special place and I feel so privileged to have had the opportunity to visit. Travelling means a great deal to me, and  have been fortunate enough to have visited many amazing destinations. I believe being able to travel is a privilege. Finally managing to visit a part of the World that has long captured my imagination will remain one of my fondest travel memories. 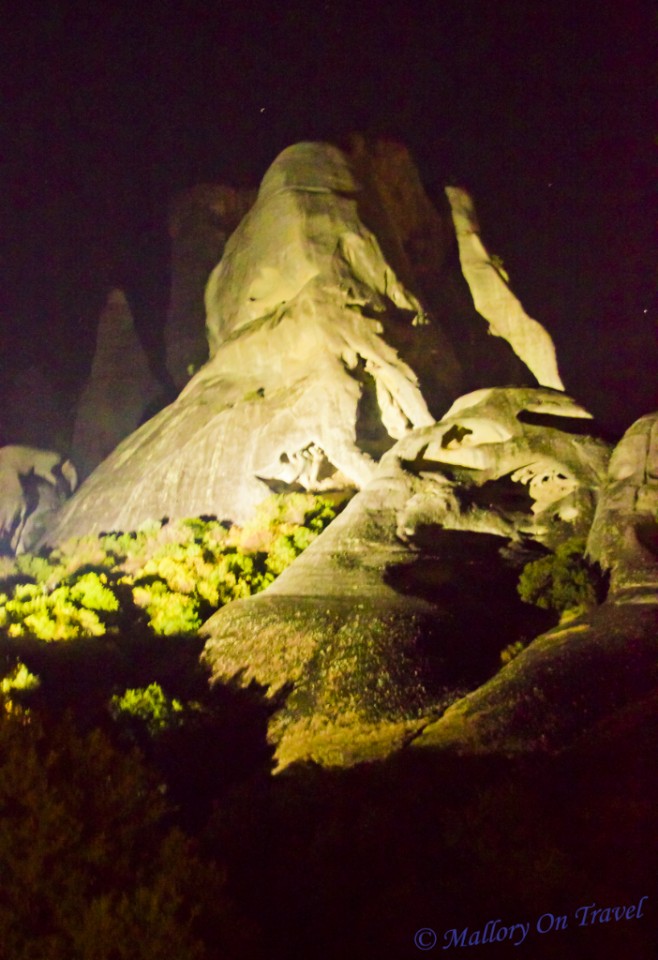 The pillars lit up at night 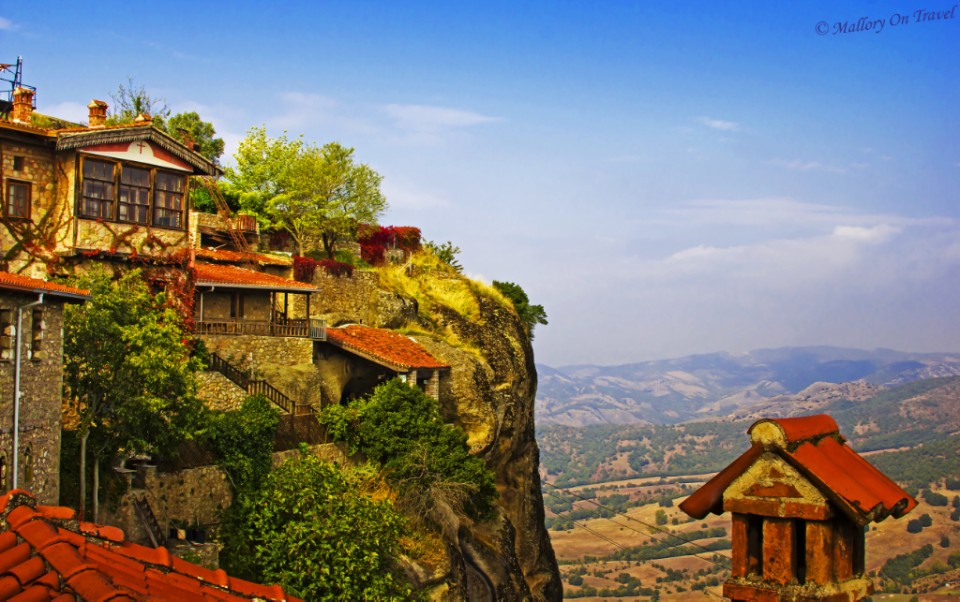 The view from Grand Meteoron