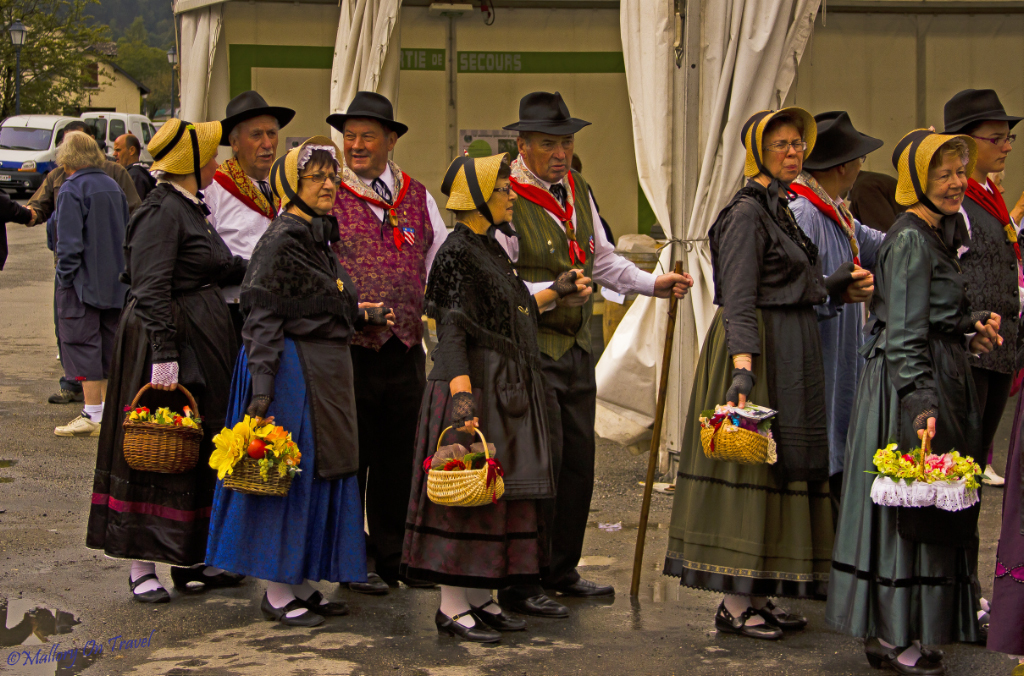 A festival is always popular, they come in all shapes and sizes, but one thing they all have in common is that they are a celebration. Many celebrate music; others culture, most are a feast for the senses with performers, musicians, floats, traders and of course plenty of drinks on offer. 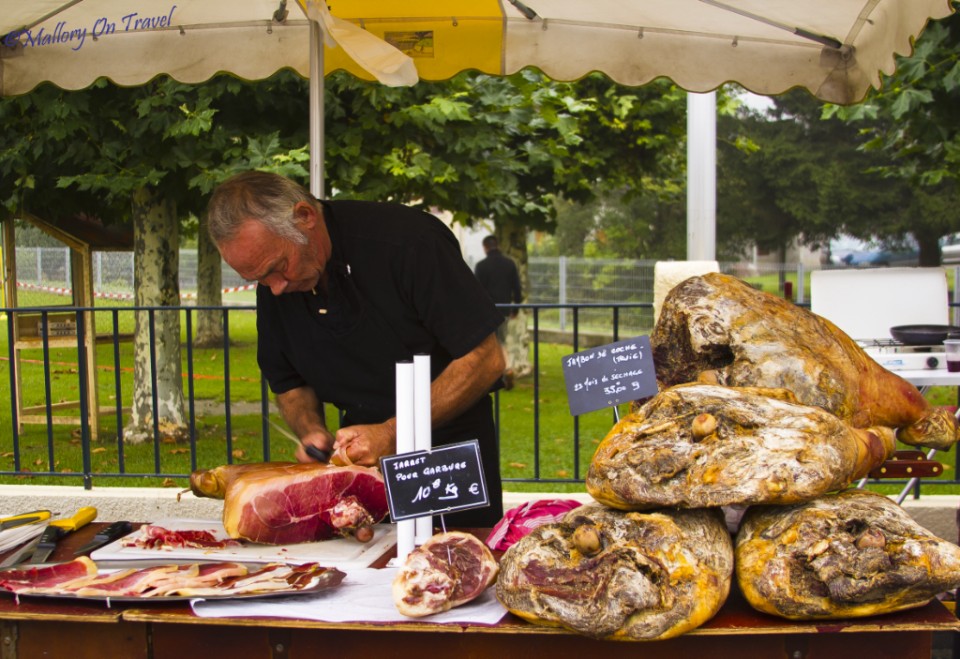 Calving up the village meat

This festival is a cultural event that has been held for generations within the village of  Arrens-Marsous in the Val d’Azun. It celebrates the returning of the sheep to the lower pastures. This is known as transhumance its origins have nothing to do with tourists and it would almost certainly continue without them.

Its full name is “Foire aux Côtelettes” the literal translation is “Fair to the Chops” and is held during September. It is the first of two great autumnal festivals in the Haute-Pyrénées, the other being the Festival of the Draught Horse which takes place in the second weekend of October.

The cutlet festival is an excuse for the community to get together, meet up with old friends and cement ties with other communities on either side of the French/Spanish border. It is all very friendly and any possible disputes between neighbours are at least for this weekend forgotten. The main reason however is to buy meat for the family to last the cold winter of the region.

“a post in the vein of “Free Willy” was tempting”

This provided the only slightly poignant feeling to the event, seeing the sheep and goats,  corralled together waiting their fate. I will leave the rest to your imagination, but suffice to say it is possible to buy various cuts of meat from the butcher and for those with a large enough freezer all the animal is often purchased. 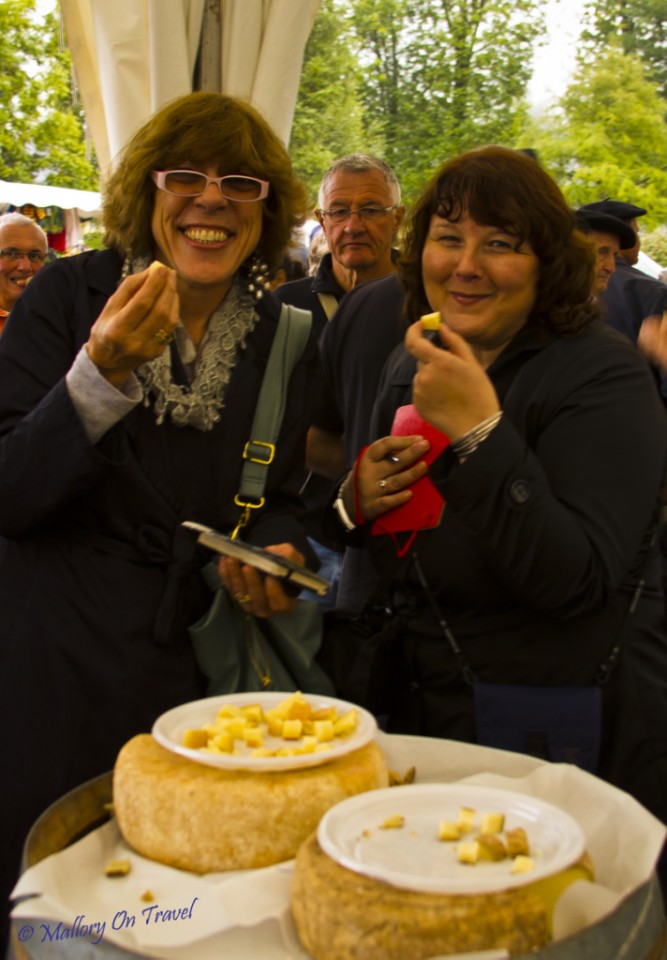 There is also a competition where the entrant that successfully guesses the weight of a particular sheep actually wins it. No, I did not enter; the idea of a post in the vein of “Free Willy” was tempting but flying back with a certain well-known budget airline meant my baggage allowance was nowhere near enough.

Testing the entries in the cheese competition was a pleasure; they were simply laid out on top of randomly placed barrels, cut up by knife wielding young women and left in mouth sized titbits. I really enjoyed almost all of them, especially when washed down with the free wine too. However the goat’s cheese specialities were maybe just different enough to get my vote.

There is plenty to keep the casual visitor as well as farmers interested here. There were local produce and craft stalls for those with a few spare Euros burning a hole in their pockets. Honey, chillies, and of course meat was on offer, but there were also paintings, knives, carvings and all manner of locally made arts and crafts for sale. 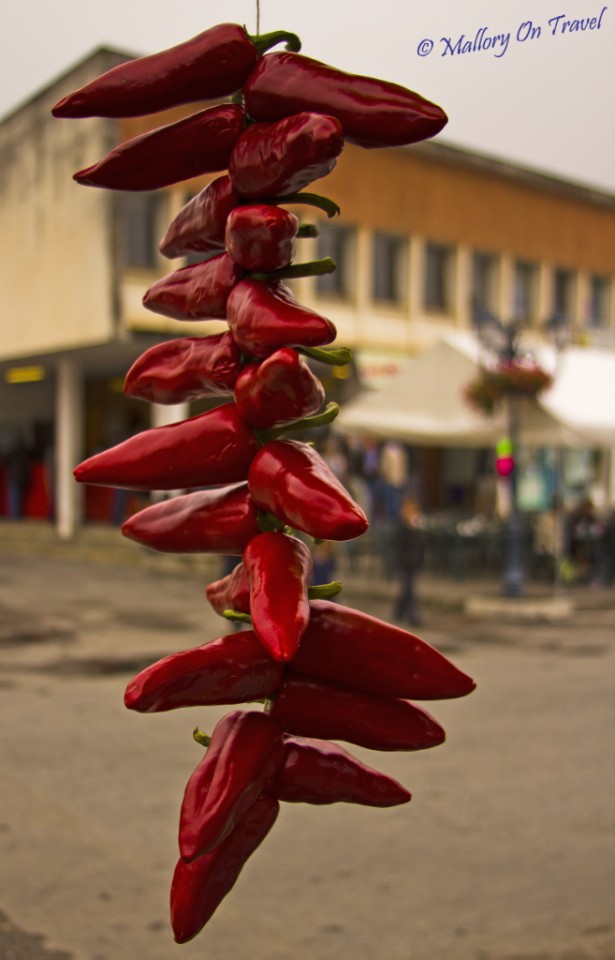 Talking of carvings, yes I was, a man who at first seemed hacking away at a large tree trunk with a chain saw was attracting some interest. He did seem to have some sort of plan, even if this was not immediately clear. In fact the finished sculpture was a replica of a shepherd. It was not complete before leaving therefore unfortunately it is not possible to comment on how accurate it turned out.

There were several choral groups present both male and female providing some melodious moments. The musical theme continued, with a pretty decent jazz style group and a band from an engineering college in Toulouse. I really enjoyed this band, their music may not have been of the highest standard but they really enjoyed themselves and this was  infectious. Everybody was carried along with their youthful exuberance and obvious enthusiasm for both performing and free beer!

A little extra colour was provided by a number of Spanish visitors from across the border in traditional local dress. It is a sign of the co-operation between the Pyrenean communities throughout the region regardless of nationality.

There was some presentation of prizes for the best cheeses, livestock and vegetables on show. These prizes were eclectic with something resembling a heavy bucket of grain or animal feed as one prize or a pair of industrial rubber gloves as another. Everybody seemed pleased with their winnings however and it was good to see that quite a few prize winners were both from the younger and female segments of the community.

Eventually we went for our lunch in the nearby marquee, this was a huge meal with several courses all of which could easily have been a meal in themselves! 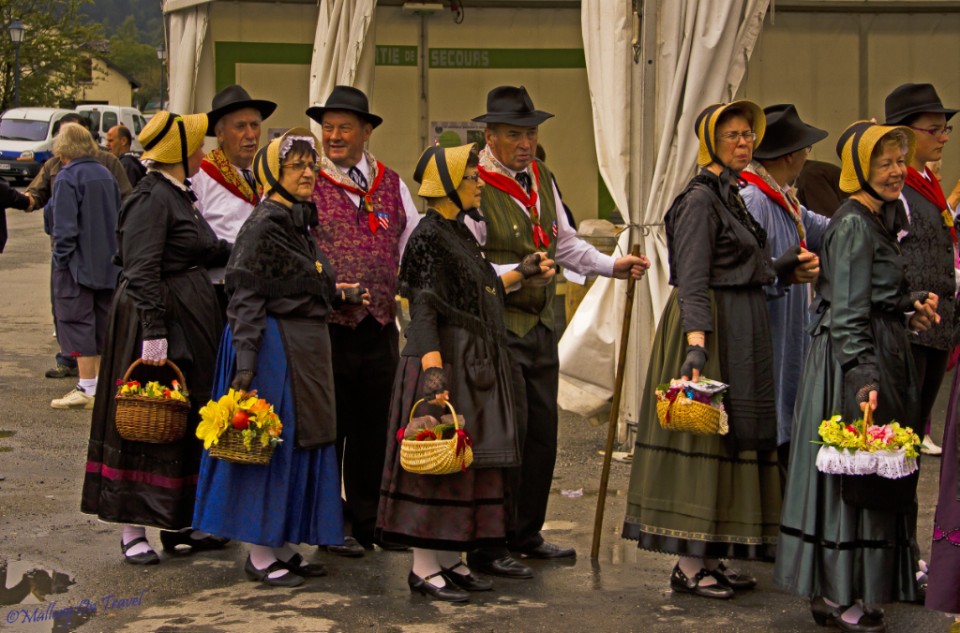 Spanish visitors dressed for the occasion

The most intriguing course was the first, known locally as ‘garbure’ it is an extremely hearty stew which is overflowing with huge chunks of meat and vegetables. Personally I was ready to surrender well before the main event arrived two courses later.

The main course was of course lamb cutlets and digestive difficulties aside these were extremely tasty. The reason the meat tastes so good is because the sheep have grazed in those high meadows on the aromatic herbs. It’s probably best not to dwell on how many lambs it takes to provide for the thousand plus visitors that the festival feeds over the weekend however. 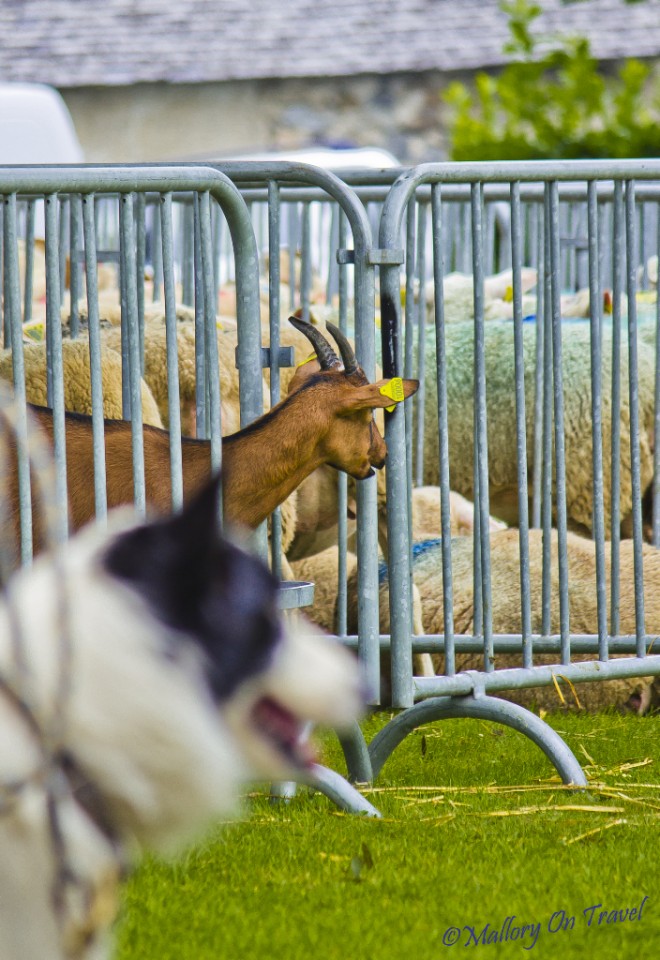 Stars of the festival

There is only one butcher that caters for the village and valley community and he is apparently an extremely busy man. Once the village has had its share of his produce there is apparently nothing left, this particular butcher does not have any need of an exporter . Vegetarians are not abundant in the community it seems. 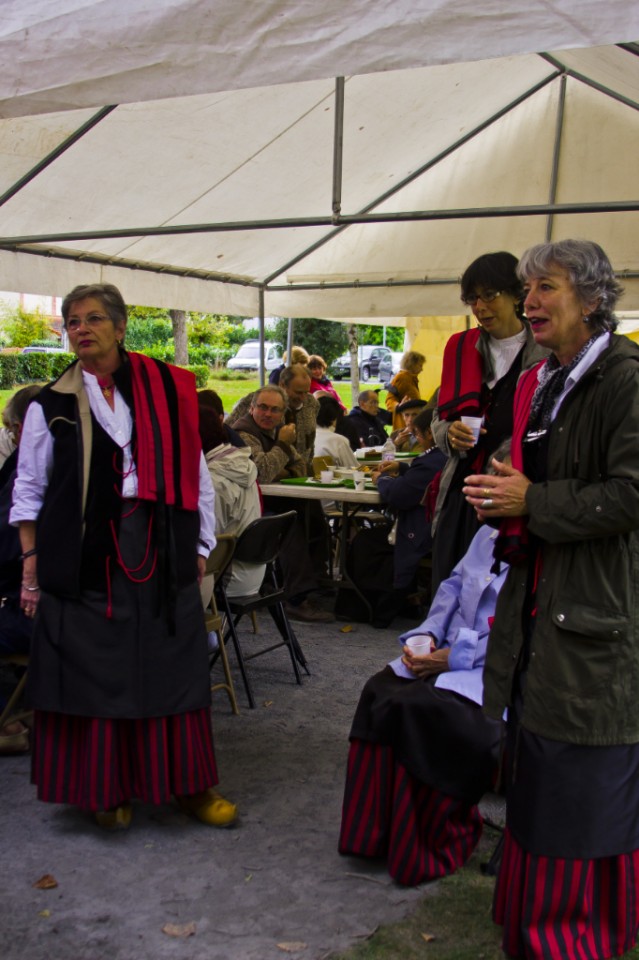 The band from Toulouse were in good voice singing away throughout the early part of the meal until the local female choral section started up and possibly embarrassed them into respectful silence. There was also a Corsican contingent visiting, providing yet more competitive vocals and there was undoubtedly some regional pride involved as each group attempted to silence the others with their singing prowess. There was one particular gentleman from Corsica that attempted to overpower the rest, but ultimately I think the local women had most cause for pride.

This visit of shepherds and farmers from Corsica is an important aspect of the festival as it represents an exchange of information and farming techniques between the two communities. The impromptu singing competition had little to do with collaboration however; it is clear that each community is extremely proud of their heritage and culture. The clans would not be silenced this particular afternoon.

Eventually it was time to leave a festival that despite suffering from a little bad weather. It’s not really trying to be a tourist attraction, and this possibly makes it more enjoyable. I cannot help wondering how the young band faired in the afternoon after all the beer they had undoubtedly consumed or how the Pyrenean chainsaw massacre turned out!

This trip was organised by CDT Haute-Pyrénées for which I am very grateful. 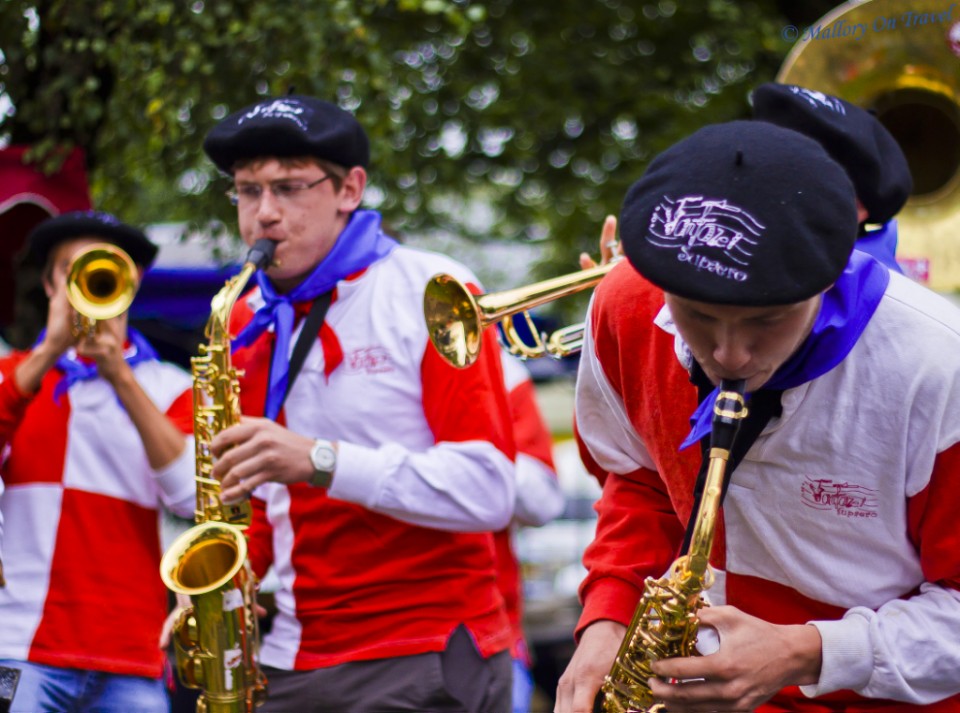 The enthusiasm of youth