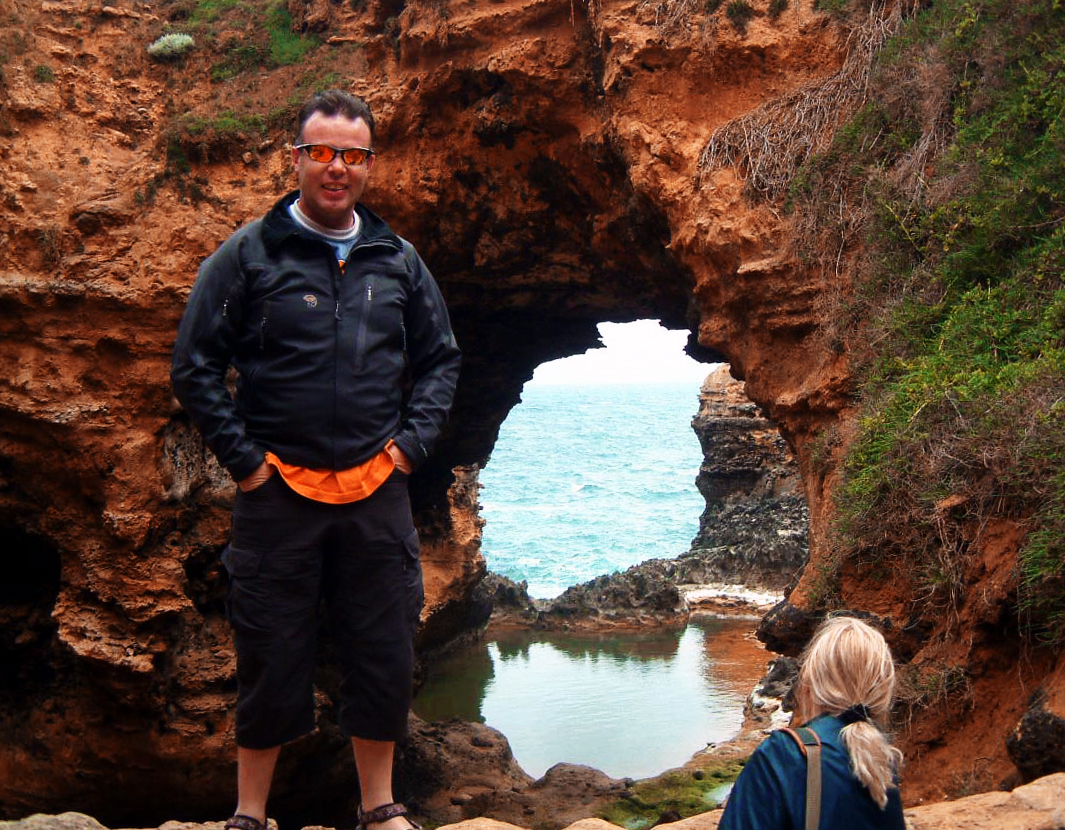 Any destination, landmark or area such as the Great Ocean Road, Grand Canyon, Great Barrier Reef or Great Trango Tower which uses superlatives to describe itself has a lot to live up to. Including hyperbole within a name puts a little extra pressure to live up to the billing. Fortunately most deliver in spades and the Great Ocean Road, Australia does not fail either. 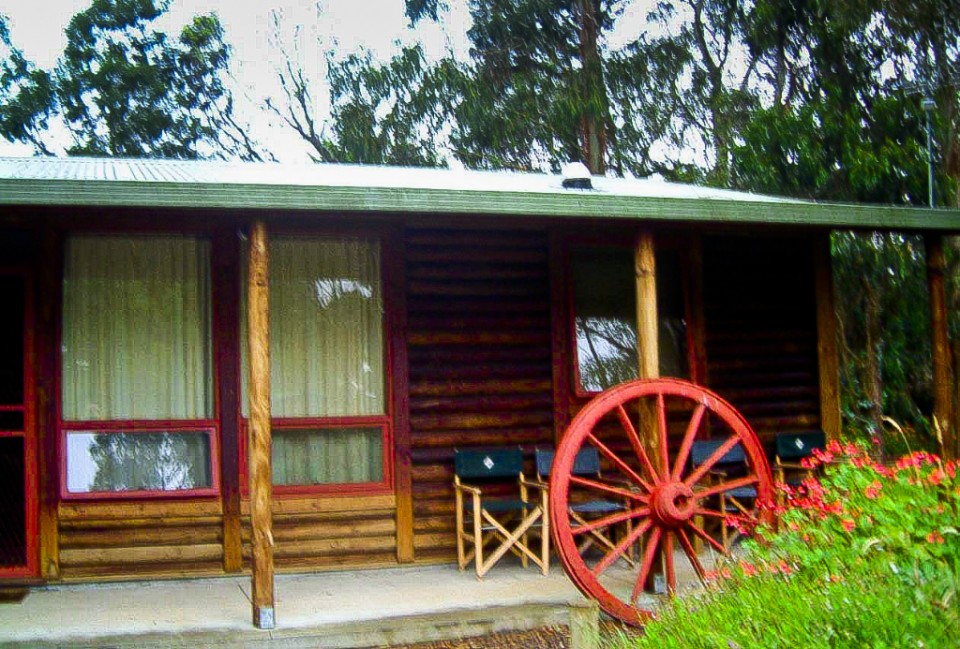 Cabin in The Grampians

Most people would probably include this particular one hundred and fifty mile stretch of tarmac in Victoria, Australia among the iconic road trips of the World. The ideal way to experience it would be in an open-topped sports car, dawdling between towns and viewpoints with a soundtrack that rocks blaring from a powerful stereo drowning out the crashing waves.

My experience however was with a friend and her parents stuffed in the back seat of a Honda Civic hatchback which was much-loved but way past its prime. It involved speeding down the famous stretch of road in less than a single day. A little less ‘Thelma and Louise’ and a little more “Cannonball Run.” It may not have been the ideal way to see the Great Ocean Road, but it still provided its own excitement, made for a memorable trip and bonus the ocean could actually be heard at times. 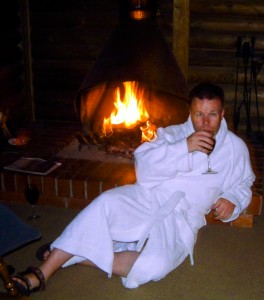 Travelling can be tough

Dropping down from the Grampian Mountains where we had spent the previous day, staying overnight in a little log cabin with wine and a log fire the starting point for our sprint down the coast was the fishing village of Port Fairy with its restored whalers cottages and wharf with Australian pelicans. No time to enjoy it though, we had to keep moving.

Next stop was Warrnambool, although it was not possible to see any Southern Right Whales on their annual migration at this renowned whale watching town it was possible to get a full English breakfast. Though not fully compensating for missing out it was still heaven on a plate that particular morning.

No surprise the road of course hugs the coastline, winding its way through the spectacular scenery. This keeps changing both left and right, whilst the ocean maybe a constant the view never looks the same. On the other side however it changes much more dramatically, early in the journey there are open fields before the little car passes beneath high and imposing cliffs, it did seem a little insignificant in their shadow.

The possible stars of the trip are the ‘Twelve Apostles” a series of limestone stacks which stand proud above the restless waves. Their name is a bit of a misnomer as there have never actually been twelve, but it is a little more evocative than the original name; “Sow and Piglets.” When we travelled along this particular stretch of Australian coastline they informed me there were nine. However as a result of erosion there are now only eight, the sea is relentlessly claiming them one by one. 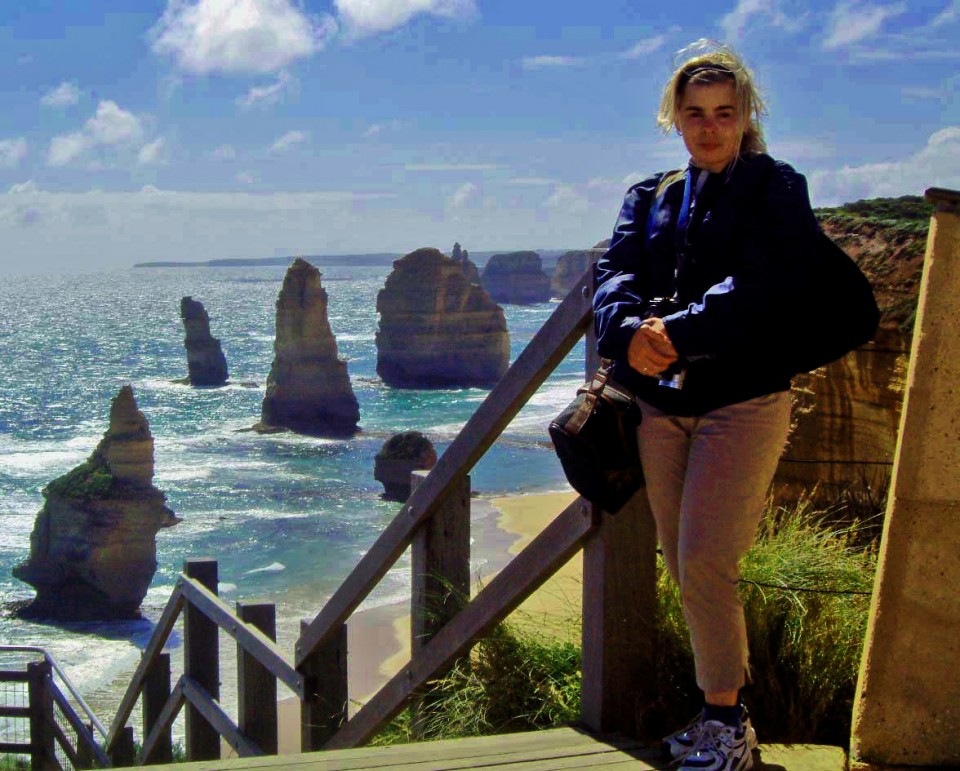 Marilyn and some of the Twelve Apostles

The road passes through the Port Campbell National Park, the Apostles spaced out between Princetown and Peterborough. Stopping along the route to take some images and watching the waves pounding the stacks it is easy to understand why they are inexorably collapsing into the sea.

This is how the coast appears to be along here, the rock is limestone and relatively soft so it get worn down quite quickly leaving all sorts of rock formations; apart from the stacks, there are caves and arches. With names that stir the imagination such as the Bay of Martyrs, Shipwreck Coast, Massacre Bay and the Bay of Islands along with smaller viewpoints with no less evocative names; London Bridge, Devil’s Breath and Fairy Grotto. 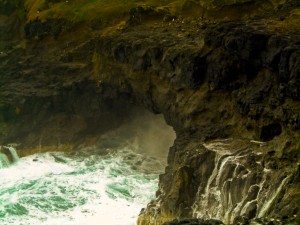 The power of the ocean never ceases to amaze me, the day we visited it was relatively calm but even so the constant motion of the ocean was tirelessly eroding the coastline even as we passed along it.

There is the option to take a helicopter ride over the famous stacks and although I have flown in several helos my friend Marilyn had not. Their flight schedule however required a full load of passengers but our own rushed flight schedule did not allow us the luxury of waiting. I am not totally convinced however that she was genuinely disappointed.

Although the Apostles are the undoubted jewels in the crown of the drive, there are other worthwhile stopping off points strung out like precious stones on a necklace. We enjoyed coffee and dainty pastries in a café in Lorne, often passing rather too quickly through a number of other towns and villages. Our chauffeur for the day also drove past a number of the signs which signified a viewpoint, cherry picking the ones he deemed worthy of a stop. There were not any complaints about his choices from me though. 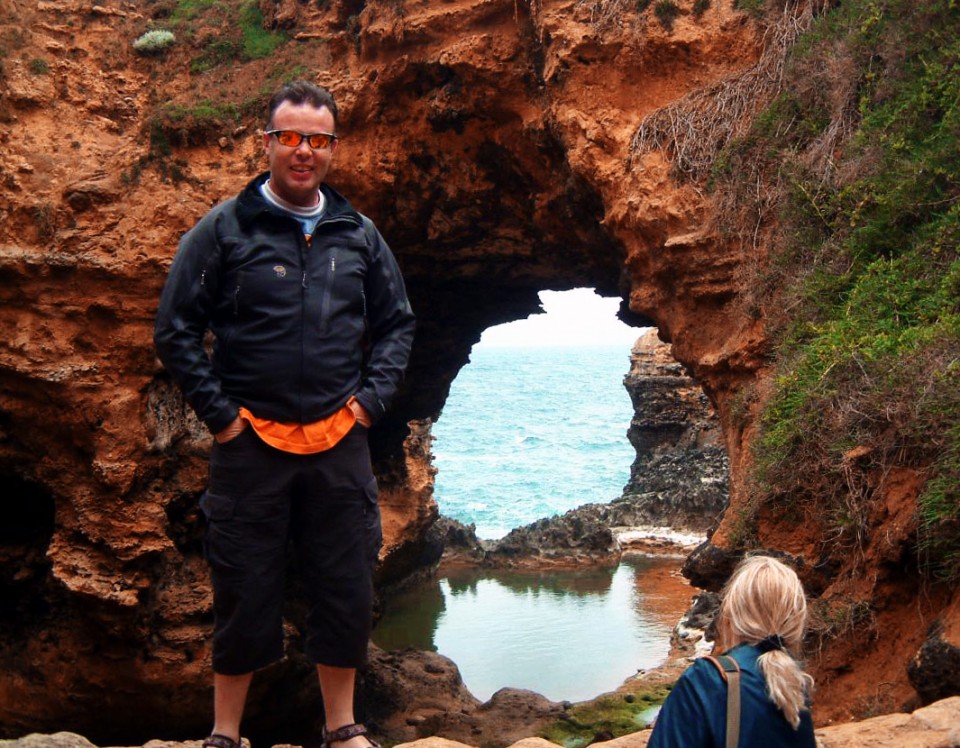 If this is a grotto where’s Santa?

A highlight for me was the owner of a restaurant in Port Campbell giving some other tourists a very severe ticking off for feeding the seagulls. It was pretty amusing but there was a serious side however, the gulls are quite aggressive almost dive bombing anybody with a little food without the need for further encouragement. This was fairly intimidating for some, they almost appeared to resemble small fighter planes from World War II strafing the diners as they tried to enjoy their meals.

The intrepid sprint down the Great Ocean Road ended at the surfing Mecca of Torquay before having to head back to Melbourne.

We did manage a detour via the Bellarine Peninsula which seemed fairly thickly wooded. Marilyn mentioned possibly spotting a koala but our driver, her dad, explained that it would be impossible to see one in the wild from a vehicle; game on! My eyes were totally fixed to every single branch in every single tree from that moment on; I did not see just one but two koalas. Yeah you guessed right I still have a smug look about it now.

All too soon however we were driving through the suburbs of Melbourne. A lovely city and one of my favourites anywhere not just Australia. However I could not help wishing that the sea breeze was still blowing through the open windows of the Honda Civic.

Coming to think of it; still missing the Superlative Ocean Road now. 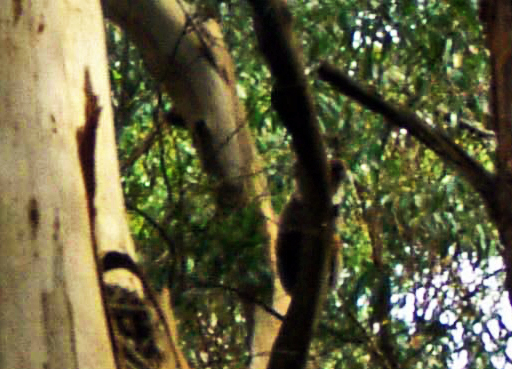 Give us a pose little guy

*In memory of my friends parents Leon and Sandra Bergman who sadly passed away a few years ago.