Whale watching is either on almost everybody’s bucket list or they have already had the pleasure. The chance to see the largest animal that has ever lived shouldn’t be missed, visitors see blue whales off Iceland, especially Husavik every year. Any whale would be a lifetime ‘highlight’ regardless of which, species swam across the bow.

Husavik is on the eastern side of Skjalfandi Bay and acclaimed as the whale watching capital of Iceland. The town is close to other attractions such as Myvatn and the Dentifoss waterfalls; and are part of the‚ Diamond Circle tour. Husavik however is a pretty town in its own right with plenty of attractions playing a supporting act to the whales. 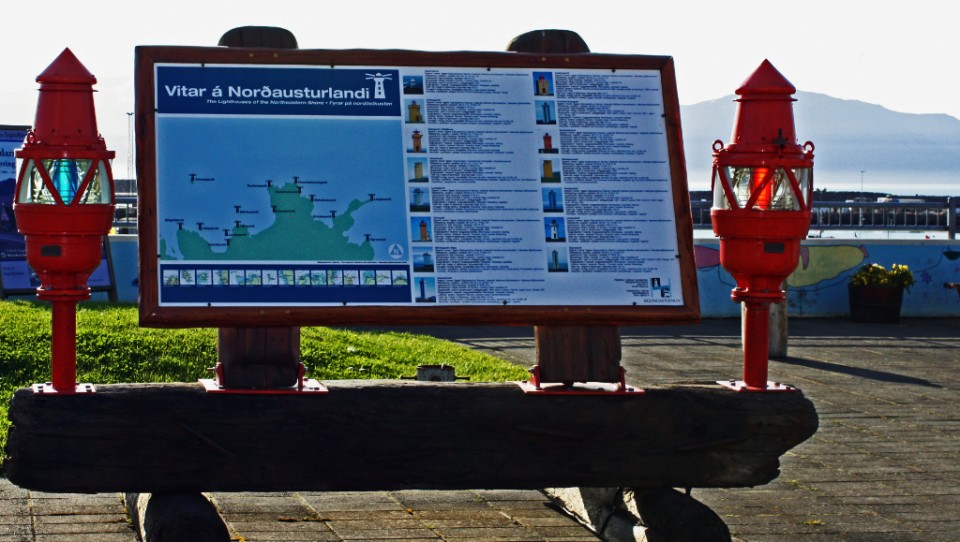 It was always an intention to fit one of these excursions in so when the hostel supplied me with a discount voucher it was a no brainer.

There is a choice of two boats offering whale watching in the bay, having discount vouchers for both was useful but decided upon North Sailing. Advertised as the longest established company operating out of the fishing village, it also offers sailing trips to Greenland.

There was a forty minute delay before setting ‘sail’, so I tried the clear pepper soup in a local restaurant, with lava bread, which despite its appearance was quite filling. This might have had something to do with all that bread than the soup though.

Heading straight out into the bay where several other boats were already positioned, a female member of the crew provided a commentary. It seemed there had been a couple of Atlantic Bottle-nosed Whales in the bay for several days and they had already achieved success with them at this site earlier that day, so were hoping for an encore. 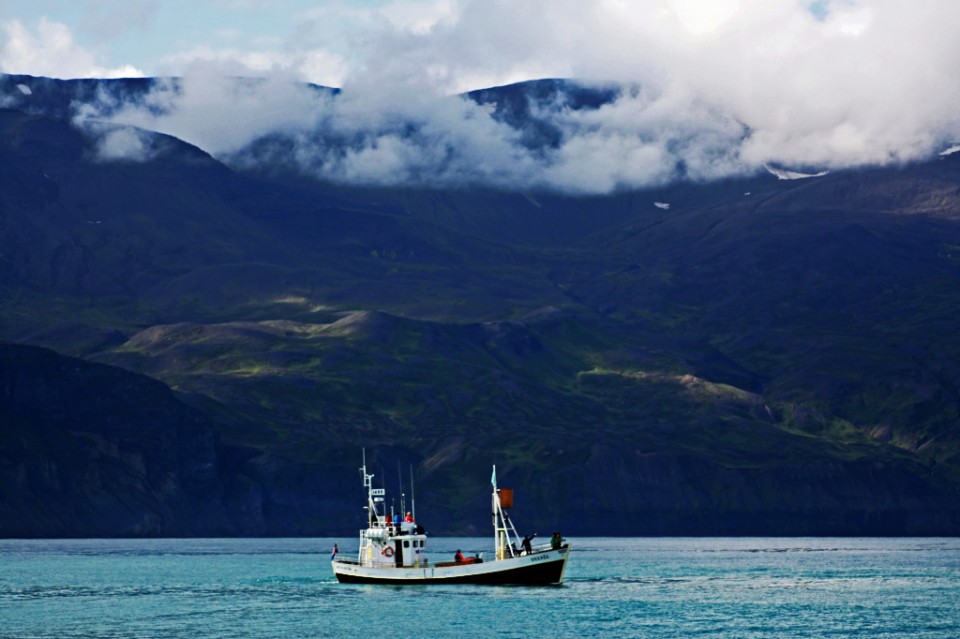 As the boat approached the far side of the bay it became clear that there were a couple of whales present and they were in fact the ‘resident’ pair. Everybody seemed enthralled at the first glimpse of these fantastic creatures, at thirty odd feet long, they are not as big as some of the ‘great whales’ but they were still very special. Appearing almost as extra-large dolphins to which they are obviously related, it was tempting to jump in with them.

Speaking to a few people before this trip; they’d been disappointed at ‘only’ seeing minke whales, this astounded me; such amazing indifference.  The smallest of the ‘great ‘ whales maybe but even so any creature thirty plus feet long is worth seeing. One girl had even seen a blue whale; the blasé manner in which she this described encounter it might as well have been a cow! Not that there is anything wrong with bovines, cow lovers.

They’re toothed whales as opposed to baleen whales and initially seemed quite curious swimming close to the boats as keen to inspect us as we were them.  The only problem being one of the boats was often too eager and continually strayed too close. This caused the probably stressed whales to dive for several minutes at a time, often appearing again some distance away.

Game of boat and whale

This type of whale is capable of diving for up to ninety minutes apparently, but fortunately they never remained submerged for longer than around ten. We followed them around and at one point there were huge gasps all-round as one breached in the far distance. This is where the whale literally jumps clear of the water and is extremely spectacular.

There certainly did not seem any indifference on this particular boat, everybody appeared genuinely captivated by these gentle giants. Every time a whale surfaced it was quickly spotted by somebody scanning the horizon for them, a quick warning would be issued and there was a mad rush to the right side to get a better view. The sound of camera shutters clicking and loud exclamations of excitement filled the air, each sighting seemed magical to all present. 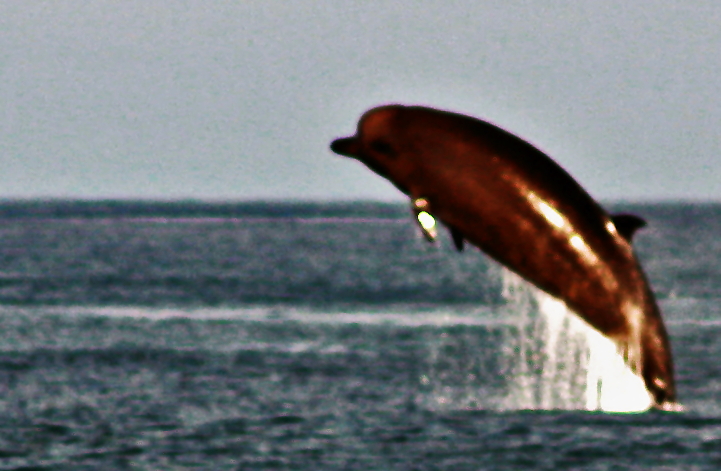 The boats would all speed to the spot as quickly as possible and we witnessed several more breachings including a couple of double performances with both whales jumping at once. It was an extremely impressive display, it felt as if they were ‘performing’ for our benefit and certainly a privilege to witness. Maybe these intelligent creatures have realised the value of  ‘whale tourism’ more quickly than we have.

I read some of the literature on board about the whales and it described these events as very rare. Querying this with a member of the whale museum who was on-board making observations, she explained that these whales rarely venture this close to shore. She had only witnessed two breachings of any kind in all the times she had been out on a boat. A lucky day indeed!

The only downside was that we then continued to ‘harass’ the magnificent creatures for the three hours that the tour lasted. Playing a game of cat and mouse, speeding over to wherever the whales appeared, they would stick around for a few minutes and then dive again only to reappear somewhere in the distance repeating the cycle. 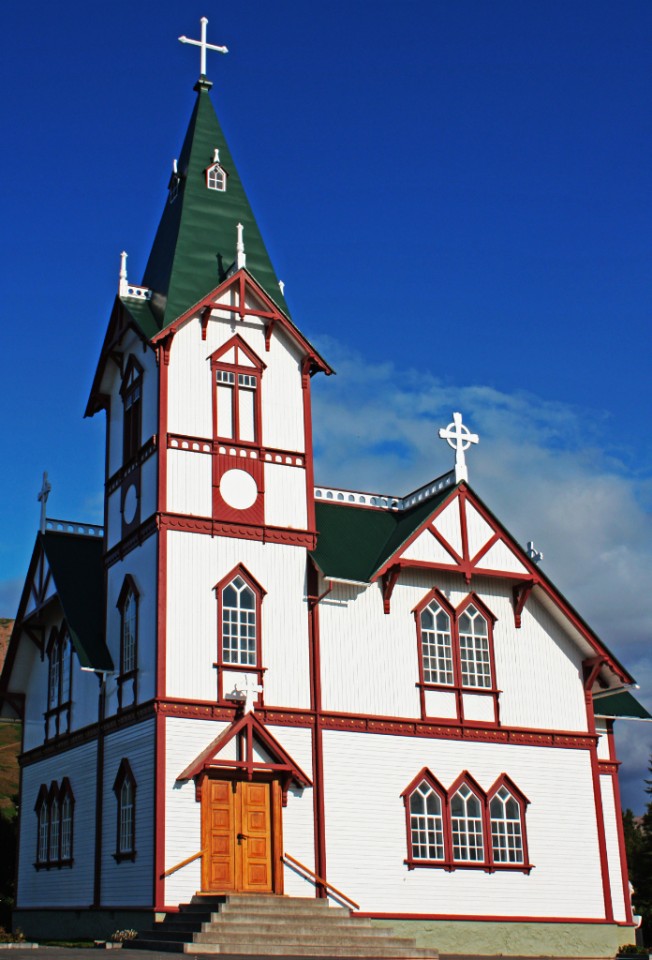 It would have been preferable to have left these particular whales in peace after awhile and gone off in search of different ones elsewhere, even if it had proved unsuccessful. It just felt as if they deserved a little time to ‘chill out’ maybe with a whale latte and cream cake or something, whatever whales do to relax.

From a pragmatic point of view this is of course a commercial venture and successful tales of whale watching trips are the best form of advertisement. In the end it is the by far the lesser of two evils, as this form of harassment is far superior to the kind which involves harpoons.

Eventually heading back to shore there was around forty-five minutes before our pick-up time, leaving some time to kill. A decision needed making; visit the National Museum of Whales or the Icelandic Phallological Museum…….. tough choice!

Thirty minutes later after a whistle-stop but interesting tour of the whale museum, I realised that there wouldn’t be time to go and look at the one hundred and fifty animal penises on view at the other very worthwhile museum. Dreadful shame, it will be the highlight of my next visit to Husavik and Iceland!

Whale meat is still consumed in some Icelandic restaurants but is surely more profitable remaining in the sea. Whale tourism is the real future, is it time to contribute a little towards proving its value?

What is your view or do you have any experiences of whale watching, share the excitement.