One of Iceland’s most popular attractions is actually three; ‘The Golden Circle’ tour takes in several of the islands most scenic and well-known landmarks. Excursions are popular and several companies are available that offer this tour. Most people who only do one tour usually end up opting for this one.

It requires an early start, setting out from Reykjavík before the sun has properly risen enables the tour provider to not only fit in all three sites but also a few commercial excursions too. 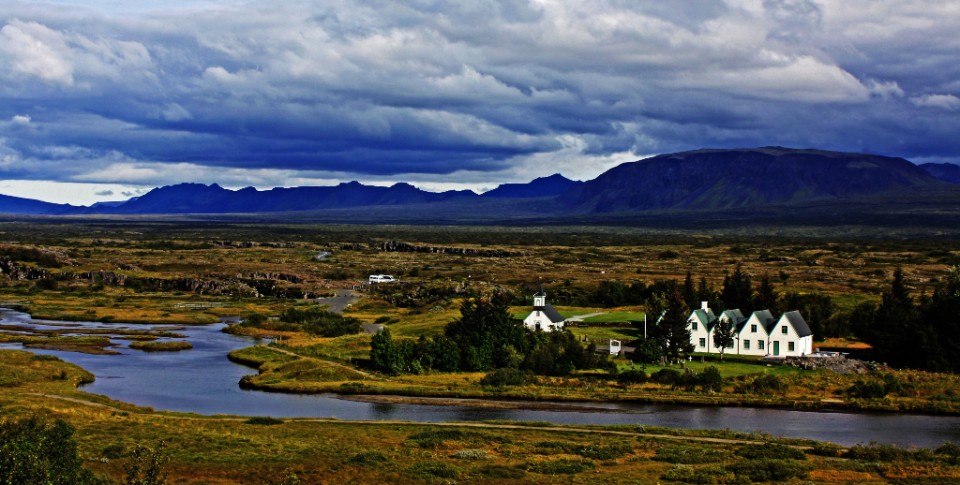 The first stop was a series of greenhouses, at Hveragerdi known as hothouses here. This particular ‘landmark’ had not been anticipated on this itinerary, but there was also a coffee shop, snack bar and gift shop and the gardens were well very nice.  As we were less than thirty minutes into the excursion, the cynic in me can’t help wonder if this little stopover is the result of some ‘contribution’ from the ‘hothouses’ to ensure a daily influx of visitors.

The next port of call before getting into the ‘big three’ was a waterfall called Haxxa, a pleasant and worthwhile prelude to the highlights. 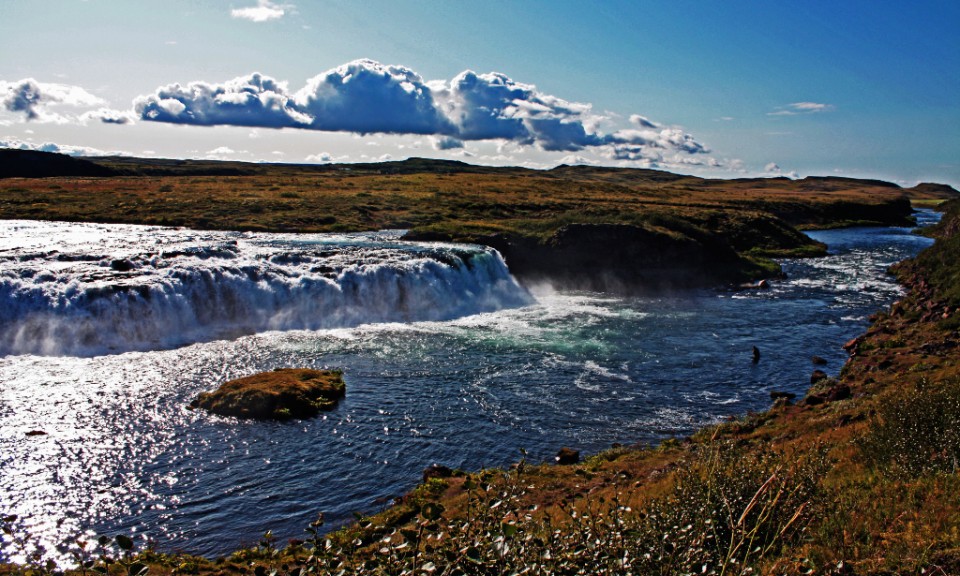 Geysir was initially bypassed to as we travelled straight to Gullfoss, which was an impressive sight. The roar of millions of gallons of falling water could be heard as soon as the bus stopped. Making my way down the pathway to the falls required wearing waterproofs as a fine mist hung in the air and carried for some distance on the light breeze.

The cascade falls down two wide steps, falling over thirty metres in total to the river in the canyon below. The power of the water is truly spectacular; it is easy to imagine that earlier in history a number of bridges were washed away by this majestic and irresistible force. There are certainly more impressive waterfalls in the World, but right at that moment it was difficult to imagine.

There are a few other tour buses here, and approaching the falls people seem to swarm all over. It is a humbling site, impressing upon me the feeling of how insignificant humanity is when placed in the context of Mother Nature’s incredible power and beauty. We were given around thirty minutes to look around and take a few pictures before rejoining the tour heading back to Geysir and some much-needed lunch. 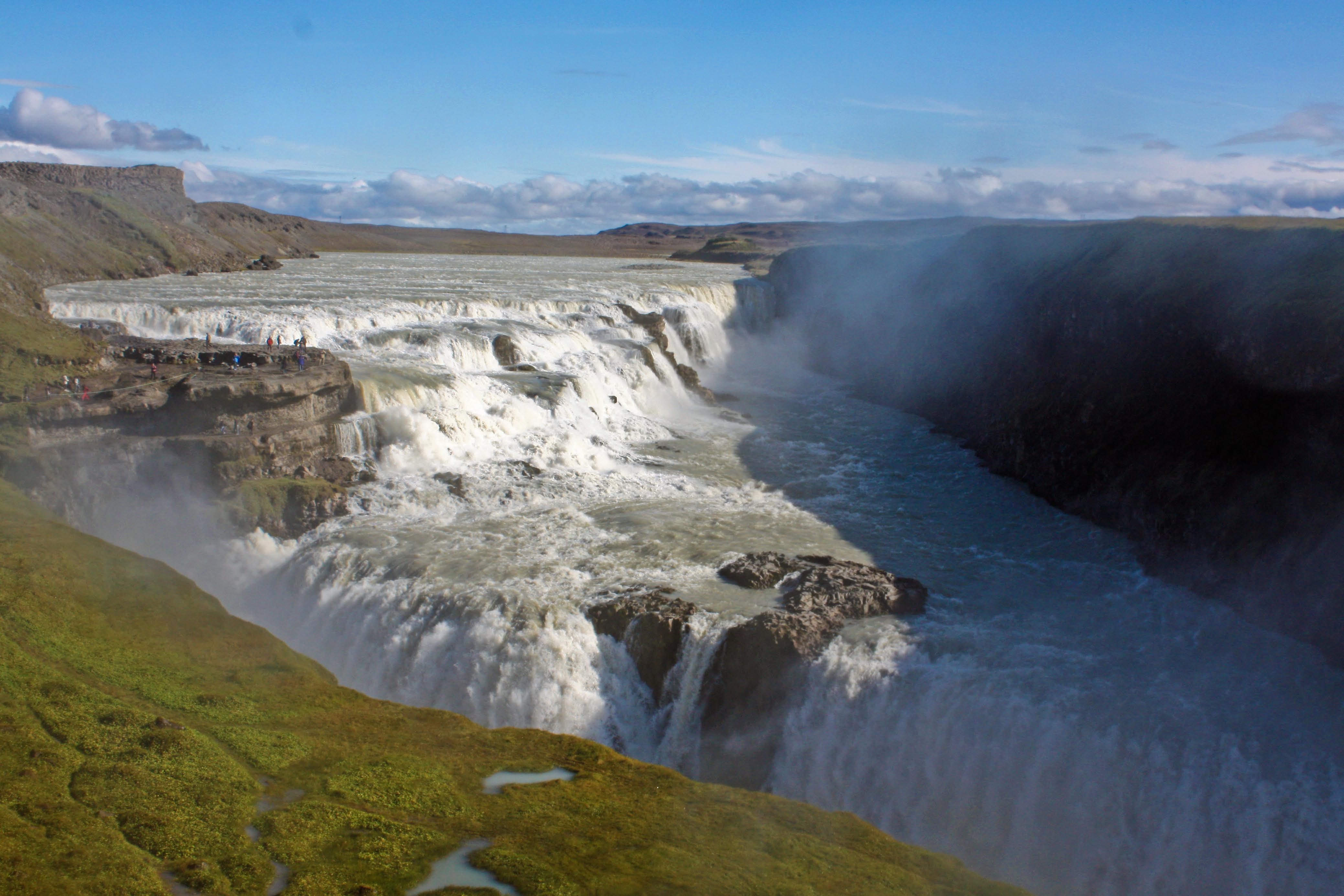 Geysir, also known as ‘The Great Geysir’ is a result of Iceland being situated on the Mid-Atlantic Ridge. Geothermal activity is clearly visible in the form of a series of hot pools and an actual geyser. There are actually two, but apparently ‘Geysir’ is sulking and has not done its thing for several years, fortunately its little brother ‘Strokkur’ still likes to show off. There is an eruption every five to eight minutes although it can surprise you by erupting moments after an earlier one.  The water exploding spectacularly to over fifteen metres, carried on the breeze the fine droplets provided a mid afternoon shower on a sunny afternoon.

There was enough time to explore the low hills surrounding the area, have a bite to eat at the hotel restaurant or snack bar and for a little retail therapy in the gift shop. I treated myself to a tasty bowl of Icelandic lamb soup before purchasing a souvenir from the shop and then returning to the bus.

Once we were all loaded back upon the bus we headed off to Þingvellir, (pronounced Thingvellir) proclaimed a National Park in 1928 and is the site where the rift caused by the two tectonic plates of Eurasia and North America drifting apart can best be seen.  It is possible to walk between these two separate tectonic ‘plates’ right here, just imagine that for a second….. strolling in the middle of the rift that is actually the Mid-Atlantic Ridge.

There are actually several visible ‘rifts’ some of them filled with amazingly clear water, it’s considered lucky to throw coins into them, making them natural ‘wishing’ wells.

It is also the site of the ‘Alþingi’ where the Chieftains used to come to make the decisions that would govern the land. It is hard to imagine a more spectacular setting for the oldest known parliament, founded here in 930. Here chieftains addressed the assembly from Law Rock Lögberg. Not impressed? You are a tough crowd!

This type of tour is necessarily a bit rushed and slightly superficial, the guide did a sterling job of keeping the time on the coach interesting. However each stop seldom seems long enough to have a really good explore and poke around each feature of interest. There is little flexibility or independence, but it is one way of getting to see these ‘must see’ sights and all in a single day.

The bus returned to Reykjavík late in the afternoon, leaving plenty of time to take part in one of my favourite pastimes; chilling. The sun was still in attendance, so it seemed a good idea to enjoy a big ice cream in a little bistro, bliss in a dish! 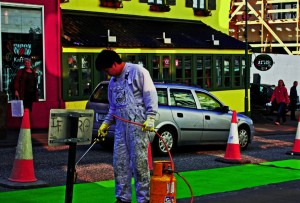 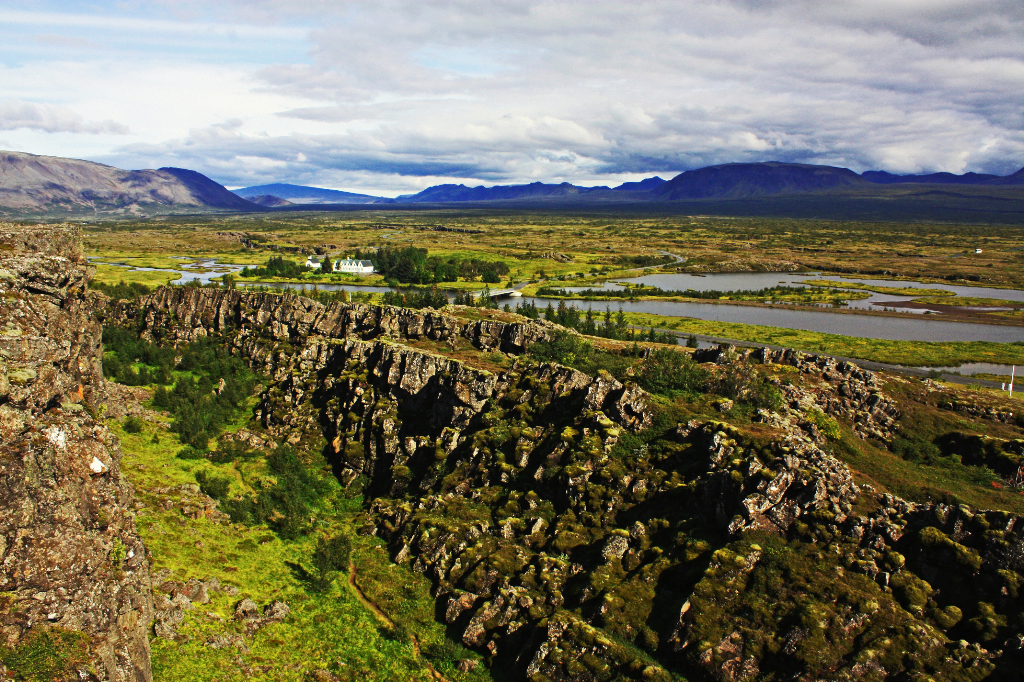 I was also intrigued to spot two guys working just outside the bistro, they were busy painting two parking spaces green, and on further investigation there was also a little green box by the roadside which was for plugging an electric car into for recharging, pretty cool! They attracted a fair bit of attention, with many people stopping to have a look at what it was they were doing.

Nature has shaped the landscape of Iceland, shifting tectonic plates and volcanic activity both past and as we are all too aware present. The rugged, dramatic, lava fields, powerful,  deep waterfalls, huge rifts ripped into the surface of the island and geothermal activity in the form of geysers and hot springs. It is breathtaking, include the appeal of whale watching and the Blue Lagoon it is a destination which offers a great deal. The luckiest visitors may experience the amazing Aurora Borealis, further adding to the spectacular scenery.

There are few more spectacular places to enjoy a coffee or beer, under a sky which is a gift from the Gods in a landscape forged in the furnace of the Planet.

Have you visited Iceland, been on the Golden Circle tour, what did you think, do you have any tips for visiting this fascinating and stunning island?