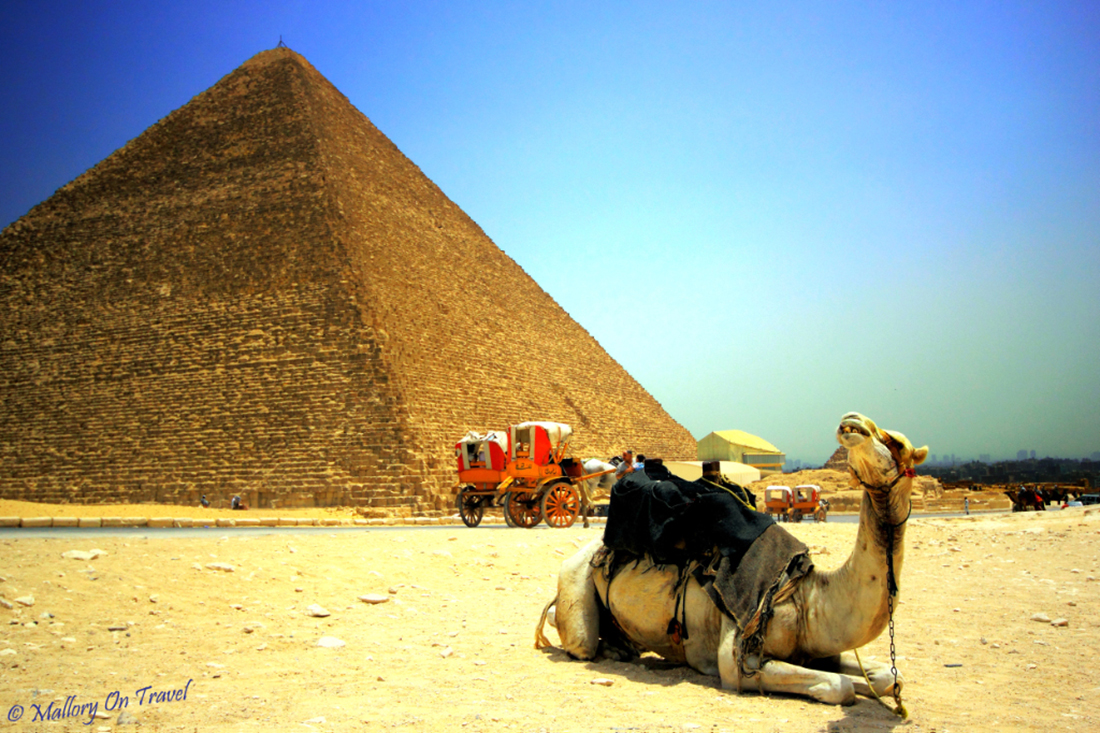 Egypt is high on the list of must visit destinations for many travellers. A country with a history that extends back further than our imaginations, one of the earliest known great civilizations and a mouth-watering list of iconic sites to visit such as Giza, Luxor and Cairo. A visit was well overdue; it was time to go looking for some excitement in a different culture.

Sharm el Sheik was the Egyptian base for travelling with a friend Aimee and the first excursion was Cairo. Travelling by bus required an early start, it was also necessary to have our passports as we would be leaving the Sinai Peninsula.

“The View of the Nine Pyramids”

The journey took several hours, which was spent dozing and looking out of the window at the generally stark terrain once the sun had risen and it was visible. A brief stop at what can only be described as an Egyptian ‘truckers’ cafe was an experience in itself, totally packed with many other in ‘transit’ excursions, commercial drivers and a few less desirable visitors. Cleanliness was not really in evidence and the normal associated ‘guests’ were seen around the overflowing bins, there were also a number of feral dogs present, which meant avoiding any food purchases here.

Cairo is of course the capital of Egypt and is one of the largest and most densely populated cities in the world with over sixteen million inhabitants. Located on the banks of the Nile and the famous pyramids of Giza are a mere stone’s throw from the capital, if you have a good throwing arm.

Riding the bus into and around the city, the half built cement and steel buildings are impossible to miss. They are left in this state until the money is available for the developer to simply add the next level, or with many generations of a family living in a single tenement, as the family expands an extra floor is added.

There was a jammed packed day planned with a visit to the Mohamed Ali Mosque in Islāmic Cairo, the pyramids at Giza, a papyrus factory, then lunch and spending the afternoon at the famous Egyptian Museum. 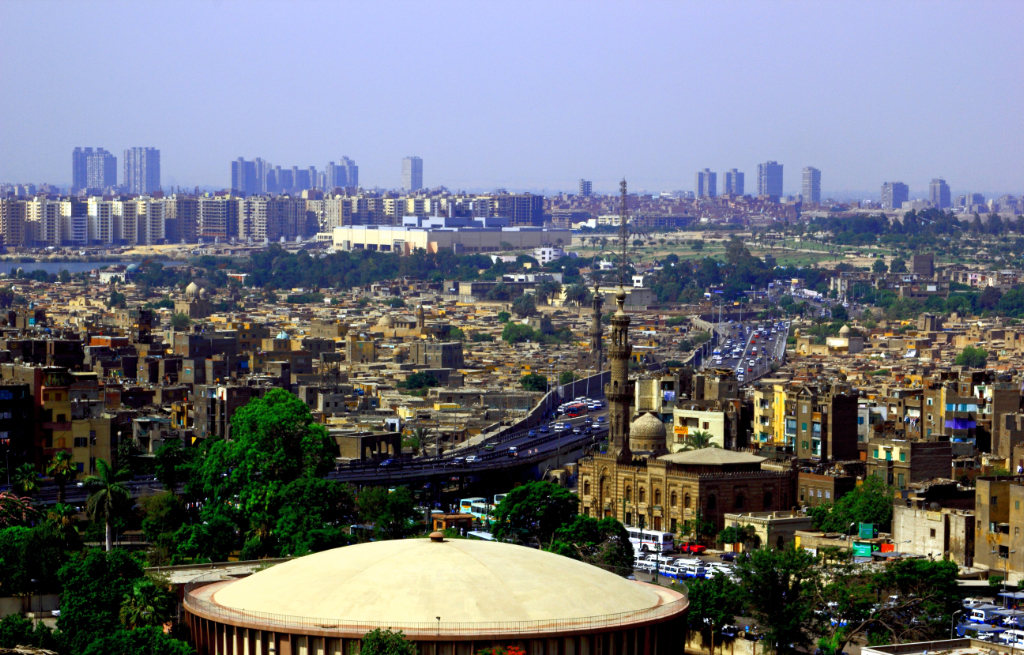 Visitors have to remove footwear before entering the mosque and Aimz had to put on a special hooded garment to ensure she was modestly covered. Taking a few pictures soon attracted some attention from a ‘helpful’ local keen to show me the best views, for a small price of course. He also offered to take a picture for me; which I declined fully aware that a payment would have been requested just to retrieve my camera from him!

The next stop was Giza, and its pyramids, these are the main reason that almost everybody travels to Egypt,  to see the Great Pyramid. Built by Cheops (Khufu), it is one of the wonders of the ancient world; an incredible feat of construction. Contrary to popular belief it was not built by slaves but by ‘workers’ living locally, around one hundred thousand of them worked for about three months a year. Reportedly taking twenty years, however many believe the maths for this simply does not compute, it is likely it took a great deal longer considering the problems of logistics, quarrying and transporting the huge blocks from over seven kilometres down the Nile. The three main pyramids date back to about the same time as the Sphinx apparently and are at least six thousand years old.

Entrance to all the days attractions is included in the price of the excursion, as well as lunch, therefore it was good value. Our guide explained a little of the historical facts to us and that there are actually apparently nine pyramids at Giza, as apart from the main three there were smaller pyramids built for queens and family members. He explained that horse-drawn carriage rides were available to see get a good view of all nine and that he could negotiate a reduced price for this.

Feluccas on the Nile

View of the Nine Pyramids

He completed this with a certain degree of theatrical overstatement and humour and there is a sneaking suspicion we still paid over the odds, with our guide getting a commission for his negotiation skills. It did prove worth it however, taking about thirty minutes there and back, it provided the best view of all the pyramids and a great photo opportunity, though neither of us counted nine pyramids.

Giza was our first real experience with ‘hawkers’ since arriving in the country, and they were everywhere, determined and persistent. Confrontations with merchants offering welcome trinkets were a constant distraction. These were never really free, and it is best to politely refuse, any sign of acceptance will be seized upon as a willingness to do business. Merely taking a photograph of a local, even a police officer will normally entail a ‘fee’. A pocket full of low denomination currency is invaluable for dispensing this baksheesh. 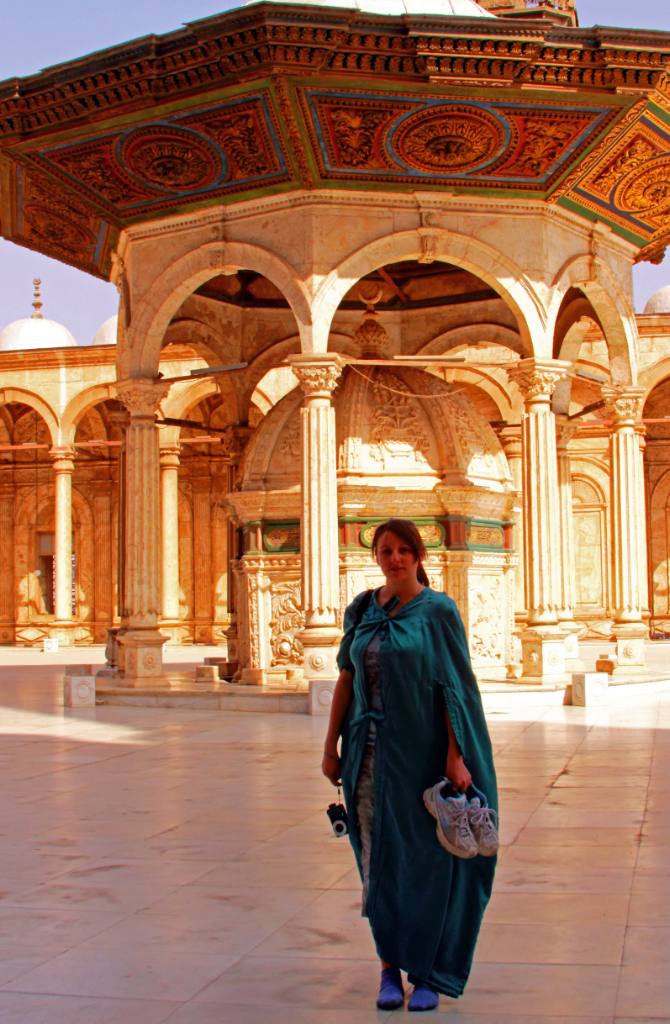 Aimz at the Mohamed Ali Mosque

This can soon become quite wearisome, and it is common to see people beginning to lose patience and becoming quite rude. The best tactic by far is to remain polite but firm and is usually enough. One particularly persistent boy followed me all the way back to the bus, as I told that was where my money was. This was despite my insistence that souvenirs were not on the agenda. It seemed as if he was actually intending to get on the bus with me!

We were soon marvelling at the mighty sphinx, it was a short stop and only allowed for a few rushed photographs. We were then whisked away for the much more important visit to a papyrus factory which was quite interesting. However the feeling was that it had more to do with our tour provider getting commission from any sales, rather than any genuine sightseeing value; perhaps a cynical view. Lunch was on a floating TGI Fridays; it was actually good, but that is all that is necessary to say about it!

There were now a couple of free hours to browse the Egyptian museum. Entrance was included, but we did have to pay extra to visit the mummy room. Two hours were not anywhere near long enough to really do this place any justice, in fact a full day would have only provided a glimpse of this fascinating place. The exhibitions are truly amazing; the mummy room was worth every penny, if a little morbid.

The treasures within the Tutankhamun exhibition more than lived up to the hype, they are genuinely beautiful, just stunning. Intricate gold embellished masks and countless other artifacts of incredible detail made by skilled artisans several millennium ago. Our guide provided us with some interesting commentary for the first part of the visit. This included showing us the only existing statue of the builder of the Great Pyramid, Cheops; it was tiny, about a couple of inches in height!

Short of time in timeless Cairo

All too soon it was time to leave, and this is the problem with such an excursion, and would become a theme for me throughout the visit to Egypt. Excursions are a necessary part of a package holiday both of which are a little alien to me. The trip was enjoyable, but it was all a bit rushed, fitting in as much as possible in a short space of time. Inevitably, there is not enough time to even scratch the surface of a city which offers so much when there is only a day to spend there.

The truth is we did not even venture into the real city, only visiting the ‘attractions’ the operator chose. Of course it is not even possible to see everything in a day, but we should at least have had the opportunity to visit to the souk. It is apparently included on the excursion if you opt to fly instead of the coach. The additional available time allows for a later start and probably makes the flight a better option.

Ultimately, it is for these reasons that flexibility of independent travel is preferable for me, especially for photography. Limited time also means less time to explore, this results in limited chance for adventures. A return trip to Egypt needs be arranged and next time the booking will be my responsibility! 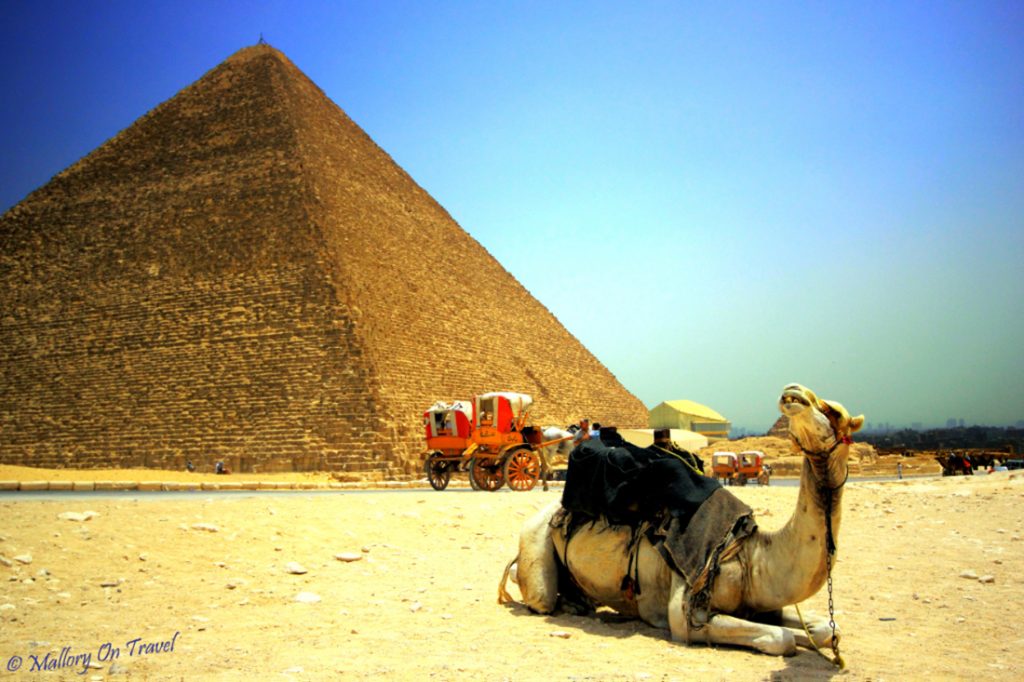